I’m considering doing the 7 day Skye Trail (North to South) ending in Broadford sometime in December. I’m just wondering if weather at that time of year would pose any problems. My intention is to stick to walking and not get into any climbing that needs crampons and ice picks, etc…

Would you recommend making any modifications to the route due to Winter weather?

I think the answer is Yes and NO and it depends.

Skye as an island has a maritime climate which leads to winters sometimes being mild and snow/ ice free. In which case the Skye Trail would be perfectly doable in December. But at times the winter can be fierce. Although you don't go too high except for one section, you are sometimes very remote and an icy path could not be avoided on some sections. So in some weather, even the low level routes might need ice axe and crampons.

I'd be more worried about January or February then December, but with climate change now with us many of the old assumptions can't be relied on.

If it was me, I would go ahead and plan to do it, but keep a careful eye on the weather as it gets closer and before committing to each stage, then be prepared to change/abandon plans depending on what the forecast is saying.

You could run into winter conditions on the Trotternish section, but I think you'd be unlucky to encounter the need for an axe and crampons: do your research on where there are safe escape routes to take you down to a road, and consider taking microspikes and walking poles for any icy paths. Proper snow cover at low levels on Skye is fairly uncommon. However, wind, rain and the short daylight hours (less than 7 hours between sunrise and sunset) are much more likely to be a problem (or at least turn it into a fairly miserable experience!).

You could get lucky with some nice clear weather in December, although 7 days is a gamble in that respect. Will be no escape from the bog factor though. Trotternish section was fairly wet on Sunday just past.

Short daylight hours could be an issue, especially as some of the days are estimated as 8-10 hours. Fine if you're confident navigating in the dark, a problem if not.

Also consider accommodation and transport. Lots of B&B's and smaller hotels close over the winter, so accommodation *might* be hard to find. If you're planning on using local buses, they might have a less frequent timetable in the winter.

Weather is an unknown quantity. Late November/ early December it's common to get a storm or two. Snow is a possibility. It's also entirely possible that burns could be in spate and difficult or impossible to cross.

Definitely possible, but definitely have a plan B!

We do sometimes get snow on the Trotternish ridge as early as mid November but it rarely stays very long.
Some heavier falls can occur in December but again doesn't tend to last more than a few days unless it's a particularly long cold spell and there might be some lying snow through to January.

Late December and into January and February the snow can heavier and stay longer (weeks) on the tops.

Snow has fallen on the ridge at the end of April (2015), so it can be somewhat unpredictable.

The main thing you can almost bank on is wind, rain and temperatures in single figures on the tops but you never can tell when the odd high turns up and it is clear, still and very cold.

If you want to put up a post nearer the time you plan to come up to Skye I can look out of the window and tell you what the conditions are like on the ridge.

Here's a picture of the Storr (from 7 miles away and a big crop of the full frame) taken 31st January this year. 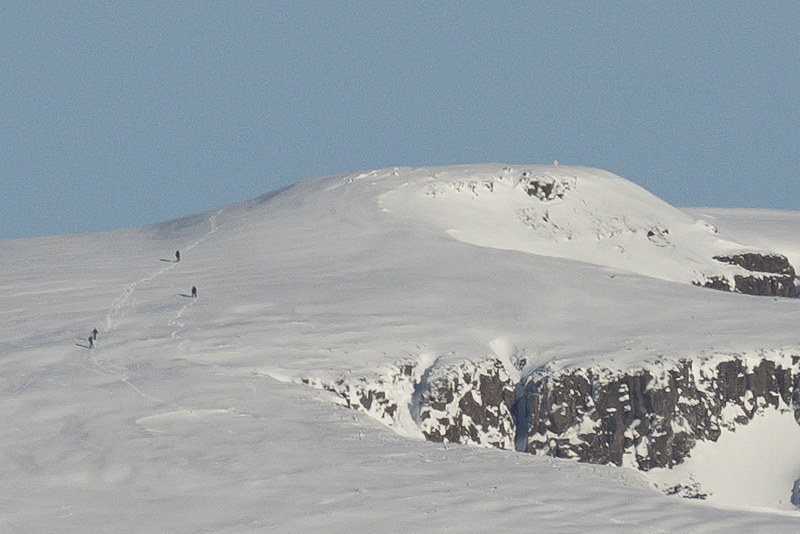 You are more likely to be tormented by lashing rain, howling gales and the daylight hours will be very short - when the weather is lousy Skye gets about four hours of twilight then it's back to darkness again.
Having said all that, here are some pics of Skye in the snow in December some years ago, when we had a particularly cold winter with lots of snow and ice.
Really, December is a bad month to do it. October would be better, May better still. Thanks everyone - that was very helpful!