Hi all, my planned route on 7 November will see my overnight stop at the area of the Corrour bothy, so I have a couple of questions, as I'm a bothy virgin.

Is the bothy just a turn up and use, or first come first served etc. I'll be taking a tent, so will there be places near by to set up.

Also as I've never used a bothy before are there any tips on bothy etiquette. Do I need to bring anything in particular.

It's probably the thing I'm most looking forward to on my trek, as the hills are quite lonely after a few hours walking, and the thought of conversation with like minded people and alcohol becomes evermore tempting...

Hi, not to put a downer on your plans but all bothies are shut.
https://www.mountainbothies.org.uk/
But the answers to a lot of your questions will be above.

There's space nearby to camp, though as said above, you should assume the bothy is closed.

Thanks for the quick replies. The tent will be definitely getting used then. I'll have to wait to break my bothy cherry.

Are there any areas that are more sheltered within distance of the bothy. Not that my tent should need it, but every little helps.

The area around Corrour bothy is green grassy turf, with lumps and bumps to shelter a tent from a direct wind. There is plenty of room, probably plenty of tent pegs left by previous campers too. The bothies are not to be used due to the risk of numbers of people from different areas arriving and spreading the virus in the close confines of the bothy - it is just a one-room stone hut with an outside toilet. In future, assuming the future improves and the dead have not risen to devour the living, bringing a bottle of whisky, a bit of fuel (maybe half a 10kg bag of coal, or some logs) will make you very welcome. Candles and matches are also good things to bring and leave for the next folk. People should never be turned away, some ignorant types have previously behaved as if they had bagged the bothy for themselves by arriving first. That is not how it works, and can result in all-out warfare. Be welcoming to others, budge up and make room. Don't hog the fire, even if you are cold, let the heat out into the room. Bothy Fire at Bob Scott's, now replaced by a stove. 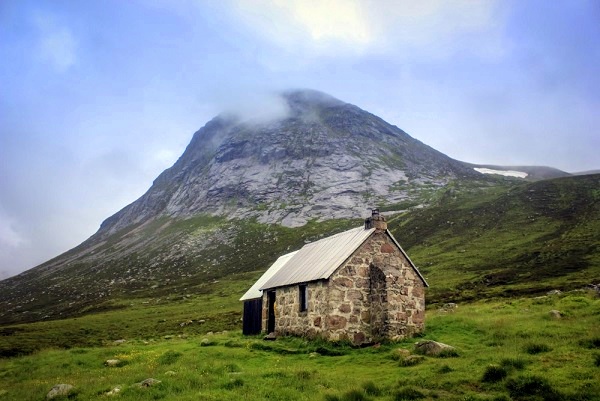 There's some nice places just next to the bothy, to the right as you look at the door.

I preferred a little further away, about 40m to the left l found a nice flat spot that has been well used. It poured down all night but there was no water run off and the ground sheet was very dry. Also a little bit of wind shelter despite the open look in the picture. You're down in the bottom of the Lairig Ghru, so it's reasonably well sheltered. There are plenty of camping spots near to the bothy.

Is it actually locked though?

Bothies were 'shut' at the height of lockdown but a project I'm working on took me into the caingorms and Bob Scott's and Corrour were both unlocked and being used.

Luke88 wrote:Is it actually locked though?

Bothies were 'shut' at the height of lockdown but a project I'm working on took me into the caingorms and Bob Scott's and Corrour were both unlocked and being used.

Most bothies are not locked as they may be needed for genuine emergencies (or, be broken into, causing damage). However they are closed and should not be used. Unless you are an ASS*.

Noting also that at present, if several people are in a bothy, they are almost certainly breaking the law regarding social gatherings, as well as having no permission to be there and breaching social and moral responsibilities.

I personally think it'll be next year before bothies can be used again.

@Essan Not quite how I would put it, but it is my understanding that bothies are technically closed at the moment and out of respect to the owners I think people shouldn't use them unless absolutely necessary.

Caberfeidh that sounds like my kinda place, I'll add some additions to the pack, just to leave for others in emergency.

I'll definitely check the day that I walk to see if it's open, if not then knowing there are flat areas will be fine.

Thanks for the excellent information people...

Choccy wrote:
I'll definitely check the day that I walk to see if it's open, if not then knowing there are flat areas will be fine.

MBA bothies, such as Corrour, definitely won't be open any time soon.

If/when they are, it'll be clearly stated in the MBA website

A tent at Corrour can always be put to good use! Many years ago I thought I had the bothy to myself until a rather eccentric late arrival without any kit whatsoever appeared. He spent the night wrapped in my tent and flysheet and left the following morning in better shape than he might otherwise.

I spent four nights at the bothy on that visit without seeing anyone else - something I doubt can be done these days.

Although the bothies are "closed" they are still being used big time judging by my 2 recent trips around Cairngorms,i camped outside them while folk were inside and the bothy books show mega use,maybe not crowded but still in use.
I did stay in one bothy overnight,arrived late,heavy rain and no one else around,if someone had arrived i would have went outside and braved the elements that night.
Down to ones moral judgement i would think. 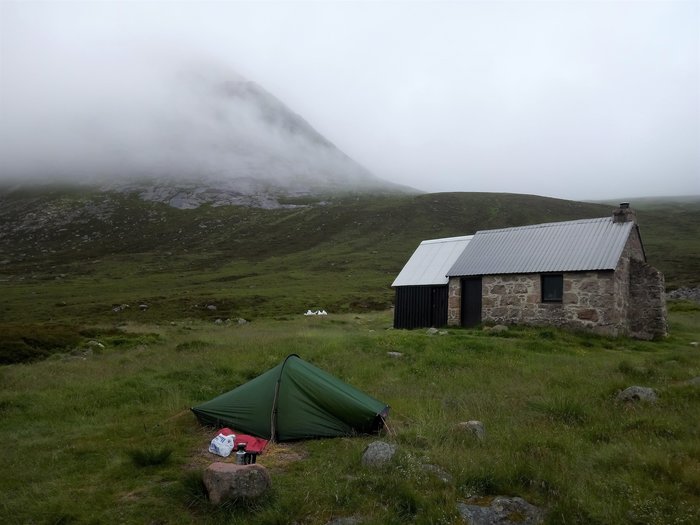 Sadly I've read reports of a few bothies being locked by upset landowners thanks to people using (and abusing) them during lockdown. I hear Corrour's locked door that only holds toilet changing and maintenance gear was broken into recently too.

Not suggesting anyone on here would be the type to leave a bothy in a poor state but I wouldn't want to be another unwelcome person in them at the moment no matter how little harm I thought I was doing. We've already lost Peanmeanach this year thanks to the estate getting fed up with visitors' behaviour and I worry how many other bothies may not re-open if estates realise they can turn them into rentable accomodation and get more money for less trouble.