This forum is for general discussion about walking and scrambling... If writing a report or sharing your experiences from a route, please use the other boards.
Post a reply
64 posts • Page 1 of 5 • 1, 2, 3, 4, 5

This is an old git's point of view but before about 2000, people didn't call MR out for themselves. They couldn't, because mobile phones were fairly new and the hills didn't have coverage. MR got called out because you hadn't returned. With the mobile phone, MR has become an unthinking option rather than a last resort. A whole bunch of the publicised fines have been for what sound like unnecessary callouts. I'm lost on the Cobbler. My tent's blown down on Ben Chonzie. I'm lost on Ben Lomond! Eh? The one in the Lake District where the boy was suffering from chest pains and anxiety - it should have been a call to NHS 24.

Back then, we made a lot of mistakes but worked out the answers in time, mostly by a fine margin, leading to a phone box call home in darkness. That was to cancel the rescue. The call home brought the news that they'd forgotten you were out and had mislaid your route details anyway.

In the last half dozen years, I've been on the hill with someone who's dislocated a shoulder and with someone who's broken their leg and we've got off self-powered. The broken leg was only a mile and the fractures were weight-bearing. It still involved a river crossing and the worst thigh deep icy swamp I've encountered. The shoulder was from the top of Ben Ime to Inveruglas. We didn't bother the MR.

The broken leg was in the Lake District. So at 7pm we were going into Minor Injuries at the Western, instead of a hospital in Penrith. The Beinn Ime case was repaired and in a pub in Morningside by 5.30. The doctor who put him together in Paisley had said we should have called out the MR. That was because his mate was on call and he'd never been on a helicopter. It's generally better for you to try and work your own way off the hill.

I'm not for ideas like compulsory insurance. But one thought would be a standing charge of £200 per skull for a rescue. It's a pretty nominal charge for what you get (and is in line with the standard fine but should be regarded as a thank you to MR, not a punishment.) The money could go into a fund for extra equipment or just be divvied by year among the various MRs. The money could be charged at point of rescue. Everybody seems to have apps to pinpoint location and request the rescue - they'll also have an app to transfer the funds. It might just make people realise that self-reliance is cheaper - and it's less fuss.

I think with the growing popularity, call outs are going to be more frequent. While I like your idea I think it would lead to insurance companies getting involved and, inevitably, lawyers and claims! My preference would be for funding to go to mountain guides / glenmore lodge etc for subsidised training and even roll it out at schools.

All i could think of was this: 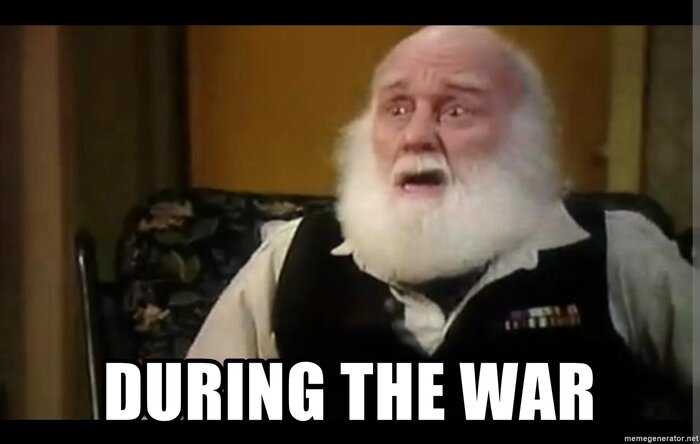 I'm lost on the Cobbler.

If you haven't been up there before and mist rolls in, there's no reason The Cobbler cannot be terrifying. It has killed experienced and competent in-group mountaineers: some rain, a foot slip, and that's it 150 feet down and dead. And that was in daylight on a Saturday.

If you don't like the idea of new walkers being rescued by mountain rescue then my suggestion is you should not volunteer for mountain rescue duties, but I see no reason to think you have a right to interfere between those requesting rescue and those volunteering to rescue.

And I'd suggest renaming your post as I'm sure Scottish MR wouldn't want their name associated with such bunkum.

Turn it round; in the days before mobile phones, how many people died before MR could get to them?

"It's generally better for you to try and work your own way off the hill."

And I'd suggest renaming your post as I'm sure Scottish MR wouldn't want their name associated with such bunkum.

While I too was taught to be self reliant in the hills, I would never want to hesitate over calling for help should the situation need it.

I am certainly against a 'pay or the help isn't coming' approach.

There is an issue of education in general over our connection to nature, preparedness and self reliance. But that has always been the case.

I do however have a worry that there is a busy year ahead for our rescue services as we welcome more people than ever to the hills/rivers/wilds than ever before.

I would never support mandatory charges, but I do agree to a certain extent that many people panic and phone for help before trying to resolve the issue. That said many lives have probably been saved thanks to mobile phones.

A dangerous attitude. What happens to those who can't afford the fee, do they get left to die? It could also have the undesirable side effect of people trying to get themselves off a mountain when they are in no fit state to do so, just to avoid the fee. That is not a good thing. I object to irresponsible behaviour but I also object to proposed solutions which could well make things worse for everyone.

I've yet to see an actual Mountain Rescue team / organisation want to be able to charge.

Surely the increase in callouts is a reflection of the inclusivity of hillwalking now as opposed to "back in the day"? There are better ways of preparing people for adverse conditions in the hills than threatening them with a fine. A wee bit of funding for social media campaigns would probably go a long way.

I too am part of the generation which tries to be self reliant while out walking and I would regard a need to call out MRT for myself with acute embarrassment. I would of course call them out without hesitation if I reached the limit of my self reliance and I have called them out on two occasions when I have encountered other walkers in distress. It's not dissimilar to calling for an ambulance - you only do it if it's necessary.

But MRT members are walkers and climbers themselves. They volunteer because they want to do it and love what they are doing. My guess is that MRT would strongly object to any notion of people in need being charged for a rescue and would certainly have no truck with a "pay or we don't come out" approach.

There is maybe a problem with people being too ready to call for help, as there is with calls for ambulances. We need to tackle that with education rather than with punitive action. I note that both MRT and Lifeboat rescue teams have been quick to disassociate themselves with the Covid lockdown fines. I recall that after a rescue of a party on Cramond Island, the RNLI issued a press statement making clear that the fine levied on those rescued was not a rescue fine, but a lockdown breach fine.

I'm sure that is call outs become too frequent and too frivolous the MRTs themselves will complain and highlight the issue. In terms of funding we should continue to support MRT by fundraising and donations. My understanding is that sizeable cash donations from the rescued party frequently follow a rescue with no element of compulsion involved.

When exactly was this golden era of self-reliant mountaineering experts on the hills? I know a few guys who hitchhiked to Arrochar and Glencoe in the 50s and 60s, they'll gladly tell you how clueless they were when they started out. Must have been before then?