This forum is for general discussion about walking and scrambling... If writing a report or sharing your experiences from a route, please use the other boards.
Post a reply
53 posts • Page 3 of 4 • 1, 2, 3, 4

So how busy was it?

It may ease off when we re allowed to car share again. A lot of people meet up in car parks, and some of them will have passed each others' homes on the way. Daughter had to remind me that we cannot even fetch her from the station currently if she comes to visit.

RiverSong wrote:Saturday 24 April, Clachnaben car park plus all the surrounding lay-bys and parking spots were full by mid morning. By 6pm the car park was empty, so that might be a good time for anyone who wants a quiet walk. The Falls of Dess, which only has parking for about 3 cars, had 15 cars parked along the road, some had even parked in a nearby farmer’s field. People out walking everywhere along a very busy road. I even saw people walking up Cairn O Mount.

Yes, that’s true, but you need to tell all the people parking on the roads and in the farmers field.

Sgurr wrote:It may ease off when we re allowed to car share again. A lot of people meet up in car parks, and some of them will have passed each others' homes on the way. Daughter had to remind me that we cannot even fetch her from the station currently if she comes to visit.

You can pick her from the station, masks on windows open. If it's an easy walk for her that's fine but is your car any more hazardous than bus or taxi?
It's a guidance thing and up to you to make a sensible choice.

Took a run up to Ullapool for lunch today. It took about just over an hour from Inverness. Next to nothing on the road after the turn off for Dingwall. The Ben Wyvis car park looked fairly busy but not full. It was around midday so probably some had been and gone.
At Blackbridge for the corbetts the parking area was empty.
Two cars at Dirrie Mor & only one at Inverlael + one campervan.
Ullapool was dead by Ullapool standards. I Could see a few people up on Ullapool Hill though.

I was quite surprised how quiet the hills were and Ullapool itself. The weather wasn't ideal but not bad either, especially early on.

We met a friend from Ullapool who said they only have had a small amount of visitors but that might change this weekend.

Apparantly it's a holiday weekend!

We were up that way too at the weekend (Badrallach specifically). As you say, relatively quiet roads, but the Wyvis carpark (including another layby about 0.5 miles north of the official carpark) as well as the pull-ins at either end of the Fannaichs, and the Shenavall/An Teallach parking area were totally mobbed on Saturday. Less so on Sunday afternoon. The Lochivraoin pull-off was the busiest - I imagine a lot of people saw the good forecast and decided to do a full Fannaichs traverse.

We spent over 24 hours on Beinn Ghobhlach and Cnoc Bhadrallaich and passed one other person (plus saw a couple more in the distance).

Went to Arrochar last Thursday and it was starting to get really busy. Also there was strict enforcement of the parking there, with loads of fines being dished out. One final thing, the butter bridge car park has been completely taken over by rubble from the land slip. 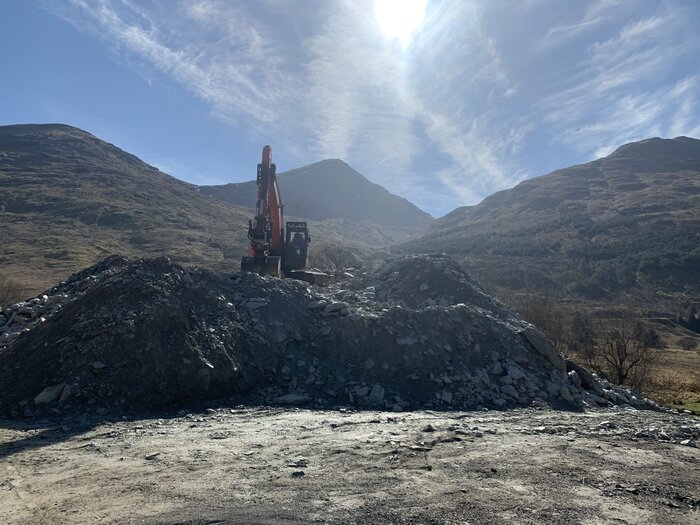 I parked at Auchessan yesterday (Wednesday) for Sgiath Chuil and Meall Glas. I arrived at 9, and there were 4 other cars there so not completely full. When I returned there was one car parked on the verge of the A85, so the parking area must have been full at one point

Was on Gulvain today by the "normal" route from Kinlocheil. Arrived at 7 am nothing in the parking area apart from an artic lorry and driver. I carried on under the railway bridge and parked in the big space there.
There was only one other person on the hill (on that route anyway) the whole time I was out and parking area had just one car when I arrived back.

It appears at the moment the masses aren't venturing too far from weegieland............. for just now anyway.

In the Pentlands today (1st May) and last Saturday (24th April).
Definitely other folk out on the hills (nice to see some DofE/scout groups out), but to be hones not as busy as I was expecting.
Thriepmuir car park was busy today and looked like there were no space at about 10:30, but there were definitely spaces at Hillend when we got down at about 4:00.
Bonaly was busy but had a few spaces last weekend.

Did the seven sisters (SE England) yesterday. A lot of people doing at least some of the walk trying to make the most of the last day of reasonable weather before November arrives later today. Car park at Birling Gap nearly full, people parked along the access road, looked like a minimum of half an hour wait for the toilets (people in SE England can't do anything quickly), and I couldn't be bothered to queue up for the cafe. malky_c wrote:We were up that way too at the weekend (Badrallach specifically). As you say, relatively quiet roads, but the Wyvis carpark (including another layby about 0.5 miles north of the official carpark) as well as the pull-ins at either end of the Fannaichs, and the Shenavall/An Teallach parking area were totally mobbed on Saturday.

We went to Badrallach last Saturday (1st of May) and only saw two other walkers on Beinn Ghobhlach, several cars parked in the car park but most of them must have been doing the low level walk. But the AnTeallach and Wyvis car parks were full just as you described. I think it will be the pattern now for at least a couple of months.

We visited several different hills during the past week: two trips to Ardgour (very quiet), one to the Fannichs from Loch Fannich side, also rather quiet. Torridon Grahams were completely deserted on Thursday and Friday. The busiest walk was the visit to Rubha Reidh. It is now possible to drive to the lighthouse, so the road was full of cars and campervans. We made ourselves look silly because we walked it all the way from Melvaig

Upper Falls car park in Glen Nevis full at 8.30am on Saturday - though there were quite few overnighters heading back from Steall Meadows. Other car parks in the Glen quite busy but not full. Plenty of space at Creag Meagaidh on Sunday.

BlackPanther wrote:We went to Badrallach last Saturday (1st of May) and only saw two other walkers on Beinn Ghobhlach, several cars parked in the car park but most of them must have been doing the low level walk.

Two other folk on Ghobhlach? That's busy!
I think some of the Scoraig residents (or their visitors) leave a car at the end of the road.

Was very surprised how quiet it was today in the Crianlarich area, mainly talking about the car parking. Went up Beinn Challum and never met another soul until I was very close to the train line on the way down. Car parks on the way back to Stirling weren't full all the way back (around 11AM) including the likes of Ben More, Ben Each and the big layby at Ledi, very unusual.

Ben Klibreck in the far north was quite busy today, though the construction of a wind farm has removed the usual parking area which doesn't help.

We took the last space in the alternative car park a few hundred metres uphill at 10am. After that some people were parking in the passing places.

Probably about a dozen cars in total.