This forum is for general discussion about walking and scrambling... If writing a report or sharing your experiences from a route, please use the other boards.
Post a reply
2 posts • Page 1 of 1

I narrowly avoided this avalache while descending a very minor peak in the East of Switzerland (Il Jalet). I'd stopped to look back at where I'd been and while admiring my deep tracks in the snow, an avalanche released from high above and passed about 20 m from where I was standing. It was fairly small, but given the waist deep snow it would have been enough to bury me. 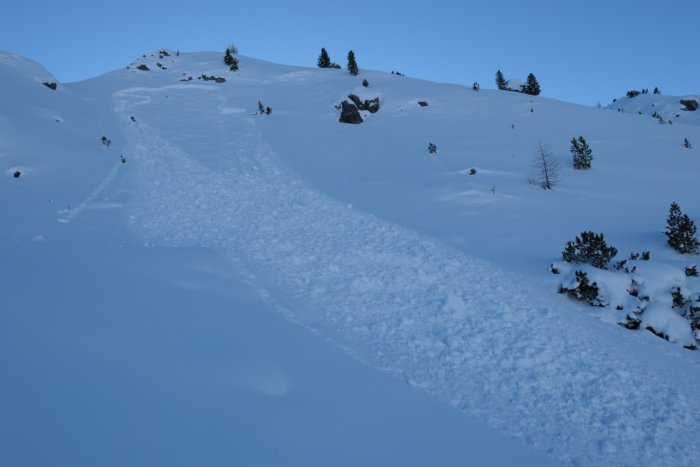 I'd spent all day being hyper-alert for avalaches but thought I was safe on this slope. The terrain was very undulating with combined concave and convex slopes and broken up with trees and rock outcrops. The snow was very deep and soft, but not stratified into layers. It reminds me of La Riondaz, near Leysin, where Dougal Haston was killed by an avalanche. Both La Riondaz and Il Jalet are such a benign and minor looking mountains it's easy to get complacent

That’s a very impressive picture of avalanche debris on a not-very-steep slope. A good reminder that winter hills do actually have the potential to kill you. Paranoia about avalanche risk is your friend! I know the scale of snowfall is very different in the Alps (as a summer Alpinist and non-skier I don’t quite know where I would start there) but I would be very wary of waist deep unconsolidated snow in Scotland even on a gentle slope.

There are lots of avalanche awareness course around now, well worthwhile investing in one if you’re going to be out & about in the Scottish winter.