CWT in March - no ferry?

CWT in March - no ferry?

Planning a north to south CWT followed by the WHW next March, starting on the 14th. Just found out the ferry doesn't cross until May.
Any advice about the route from the A838 along the west side of the Kyle of Durness to the road that leads to Cape Wrath? Stay low, stay high, or don't go there at all?

Sorry guys, where I said March I meant April.
So I'm planning to start the CWT on the 14th of April.

This issue was partially addressed in this link https://www.walkhighlands.co.uk/Forum/viewtopic.php?f=1&t=92091 but that walker was walking in the Autumn you appear to be walking North to South from Cape Wrath as you indicate, there will be no ferry running on the Kyle

a) You need to circumvent the Kyle to access a foot bridge here at the bottom (marked FB) ;

Another snag of N to S is that the army et al are normally firing on the Cape Wrath Peninsula a lot of April and it might not be conducive to your health depending on your route. These were all found on Sgribhis Bheinn which you normally wouldn't visit, but this sort of stuff could be flying over your head. Not very enjoyable listening to BOOM BOOOM BOOOM all day. They won't put up firing dates until well into next year. 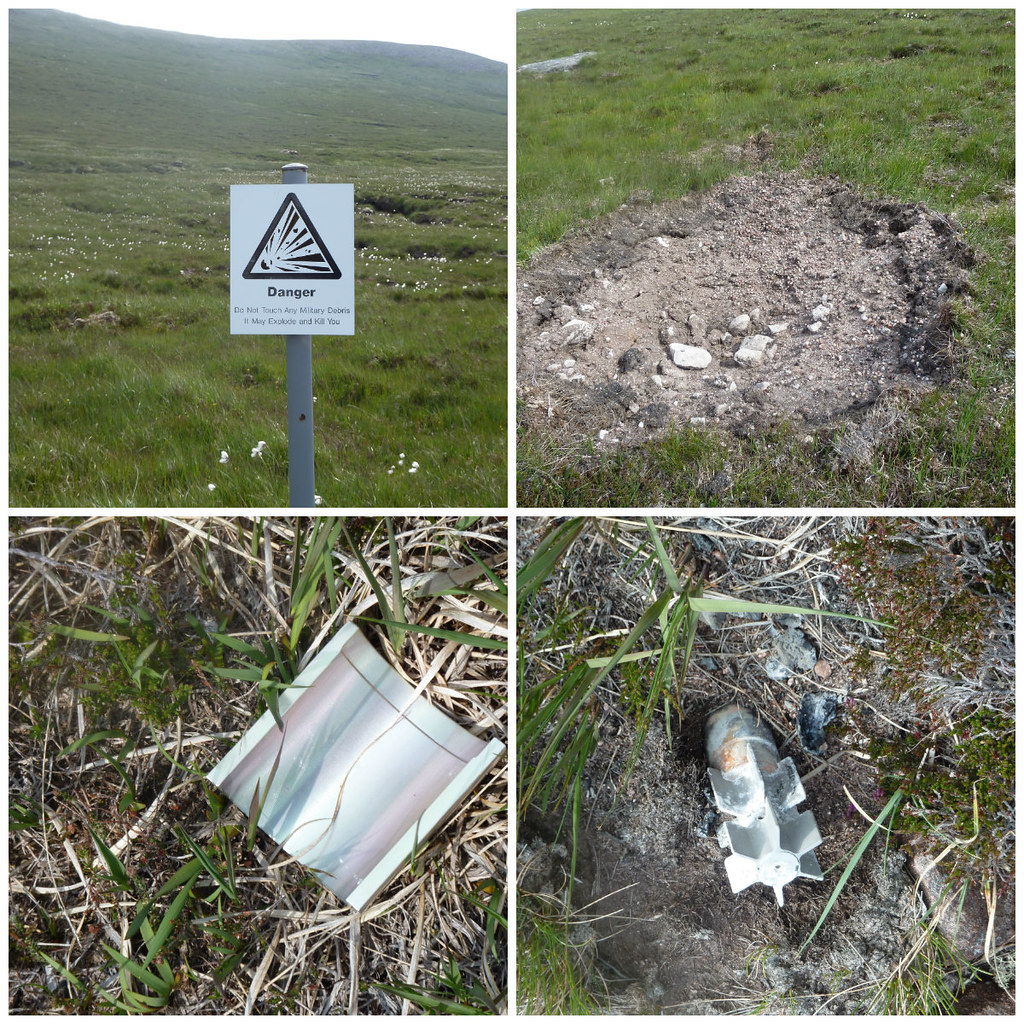 If I were you, I'd leave most of the gear at Kinlochbervie and walk from there to the Cape. Spend the night at Kearvaig bothy and start the CWT with a light pack and pick up your gear again for day 2.

There is some variation, so you don't need to follow your footsteps on the way back.

I took a slightly different route (and in the reverse direction of your plan) when I walked out from Inshore bothy last March.

On my route recorded below, there is a very faint path from leaving the cape road right to where I dropped down to the shoreline, the drop down is on a very prominent quad track, the walk along the shore is easy though and quite nice, on one occasion last year I got across the burn about 800 yds before the wee foot bridge (tide and river were very low) so saved me a bit.

The routes posted a few posts up, I've also followed but i cut between the 241 point and beinn an amair and then dropped down to the bridge further along the cape road, it was ok, a bit drier underfoot than the lower route, although it was later in the year.

Both routes were easy enough, but some very very wet patches.

Joint warrior could be a drama, I'm not sure of next years dates and I also got caught out by a last minute bombing ex that wasn't in the forecast. 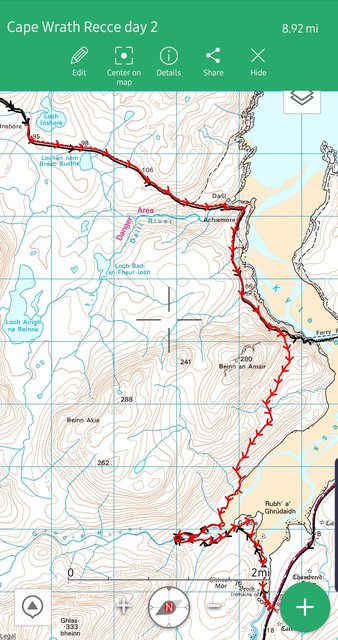 I say "faint path" and that's possibly an understatement

but it's there, I struck lucky stumbling on it it, possibly easier to find it coming from the north to south. if you weren't on it you would struggle to see it and a couple of times I lost it

A big thank you to all - some great suggestions here.
I will take them into consideration, keeping an eye on the firing times next April.

Have a great day!
GetOut

I don't have dates for next year's spring Joint Warrior - but it's often around late March/first week of April. I think it may vary according to the date of Easter though (so it doesn't coincide with the holiday period).

Assuming no problems with that. I'd second the idea of leaving most of your kit at KLB or thereabouts, walking up to Kearvaig bothy for the night and thence to the Lighthouse and south back to KLB.

GetOut wrote:A big thank you to all - some great suggestions here.
I will take them into consideration, keeping an eye on the firing times next April.

Have a great day!
GetOut

When I was @ CW in 2018 and 19 when military excersises where in progress. The military bent over backwards to assist walkers doing the CWT. They usually nowadays use the bombing range. Plus times are displayed at most walking points. These excersises only last at most 3 to 4 hours max Landforce exercises are rarely used. But you never know!

Is there a reason to go N to South?

Well, I got the idea of combining the CWT and the WHW, giving priority to the CWT. So it makes sense walking that one first, this leaves me the option to stop in Fort William, or to continue south on the WHW.
Besides, I thought it would be easier having the transportation hassle at the start and then walk down to Glasgow.
I still have about 6 months to decide what to do, so I will let all suggestions sink in and make up my mind in february or so.

Thanks for your advice, much appreciated!
GetOut

Got ya!
So therefore. I'd suggest if the ferry is not an option walk in as previous posters have suggested from Durness (ferry) around the sea loch.You should be ably to get to the lighthouse within a day although the going is a bit tough. Although Kervaiag is a nice place to stop before getting to the lighthouse!

PS
The WHW after doing CWT is a doddle.😂😂

There is also now a bunkhouse at Cape Wrath lighthouse run by 'Angie' at the Ozone cafe (food too!). Call 01971 511 314 to book a bed/meal. I could barely walk after the breakfast though but I was only going for the ferry. Good luck!

GetOut wrote:Sorry guys, where I said March I meant April.
So I'm planning to start the CWT on the 14th of April.

Dont think I noticed this post the 1st time, you might actually be lucky in April with the ferry, would be worth calling/emailing them, I came out via the ferry late april this year and they had been running for a wee while, possibly just weekends.

Re the post above, I stayed in the bunkhouse for 1 night, only person there and it's spotless, I honestly couldn't say enough good things about the owners, hospitality on acid, just watch the cats in the garage dont scare the sh!t out of you