This forum is for general discussion about walking and scrambling... If writing a report or sharing your experiences from a route, please use the other boards.
Post a reply
32 posts • Page 1 of 3 • 1, 2, 3

..whats the deepest peat bog anyone has ever fallen in? Mine was on Jura which reached my chin..

Hope someone with you or you would still be there.

This thread has potential.

Mid thigh one leg only 0.5km from Sheneval Bothy after doing the Fisherfield 6. Other half laughed from a dry bit and refused to help me out muttering about why should he risk getting wet!

I assume it only reached Mynthdd2's chin because he had tripped and fallen. Otherwise he would have needed heavy lifting equipment and/or a spade to get out. Husband partly GOT IN to a peaty bog hole with a sheep to try to extract it, but although it seemed to realise we were there to help, it couldn't or wouldn't attempt to help itself and so he just got covered with glour. It was the Sabbath in Wee Free territory, so although we could see people were in their houses they wouldn't answer the door, so it wasn't until we reached an immigrant English couple that we got them to phone a shepherd with an ATV and a rope. Hence my doubt about the OP 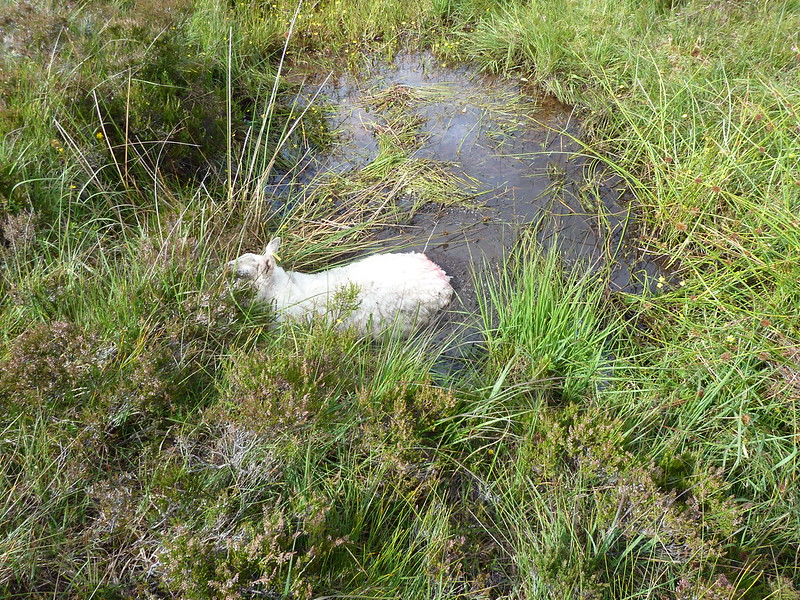 I tend to excel at bog avoidance so have no tale of 'up to so far' to tell but I did come perilously close to getting stuck fast on Baugh Fell once when I carelessly wandered into a seriously sticky area. Most panic I've ever felt in my life!

...I guess my tale has grown in the telling like most mountain walkers tales...nonetheless it was deep-ish

mynthdd2 wrote:...I guess my tale has grown in the telling like most mountain walkers tales...nonetheless it was deep-ish

There is a knack to avoid them.

Bogs , nothing deeper than over the top of my boots.

Apart from a muddy boot on occasion, so far I have been able to avoid sinking deep into peat bogs. This may change when I do more corbetts etc.
However, on a different note, sinking into snow....
One day on my winter skills course in the Cairngorms a few years ago, we were merrily descending along a snowy ridge. I was duly placing my feet in between the footsteps of the people in front of me, so as to create a trail and make it easier for those behind us. And then my whole leg disappeared! I had obviously found the hole, to great amusement of the others in my group, who commented that I had eaten too much over breakfast

I've normally got a "I've got one better than that", up my sleeve,
But I'm afraid this time even I cant top trump that one

I didn't fall in it personally, but there's one on the way to Carn a' Gheoidh that's exactly half as deep as a labradoodle. Below Ruadh-stac Beag. Used boulders to hop across a burn then walked straight into bog and went chest deep. Was quite refreshing actually seeing as it was about 25 degrees that day.

If my chin is in a bog its normally because its the first thing that's hit the ground...good effort OP.

Personally, I've only managed to get thigh deep. A mate once jumped on a frozen puddle on Beinn Riabhach above Fort William on a "day off" and went in up to his armpits. The bog was only as wide as his shoulders. We seriously struggled to get him out...as it took several minutes to be able to stop laughing. Fortunately it was only a short run down to the chip shop (we were students and rough camping behind the distillery so couldn't afford to waste time on good pub money in the middle of the afternoon just to get him warm.)

Another mate managed to fall up to his waist in the same (snow-covered) bog on the way up, and on the way back down, Fionn Bheinn. A very obvious continuous dip/drainage ditch crossing our path. You could clearly see the hole a few feet to the side where he'd fallen in on the ascent, yet still he went straight into it again. This is why we still invite him, 30 years later, as the potential for similar incidents still remains.