Night on a wild mountain - an autumn overnighter

Night on a wild mountain - an autumn overnighter


So, given we're all bored, I'm going to bore you with a few reports I've missed. This was one of the few walking trips I managed last year, thanks to a dodgy knee and surfeit of canoeing trips instead!


Last September, I spent a week that was supposed to be in the Lake District. For a few days, myself and a few friends dodged the strong winds on Windermere and had a pleasant weekend's camping. The middle of the week was grim, so I bailed to my parents' house in Notts. The forecast for the coming weekend was, though, quite good so I pondered where to go to on my way home to Surrey from Nottingham. This ended up being Brecon, somewhat off route....


After a slower journey than expected, I pulled into a small parking area on the tiny little road that winds its way over Bwlch Cerrig Duon just to the east of the towering escarpment of the Black Mountain. For that was where I was heading to spend the night, in my new little ultralight tent.

It was about 6pm, I think, before I actually got going upwards, a good two hours later than I'd hoped for originally. My bag, though was light enough, as for once in my life I was actually travelling light! (those who've seen some of my canoeing stuff will know this is most definitely not normal!). A small path headed out over the moors towards the hill. 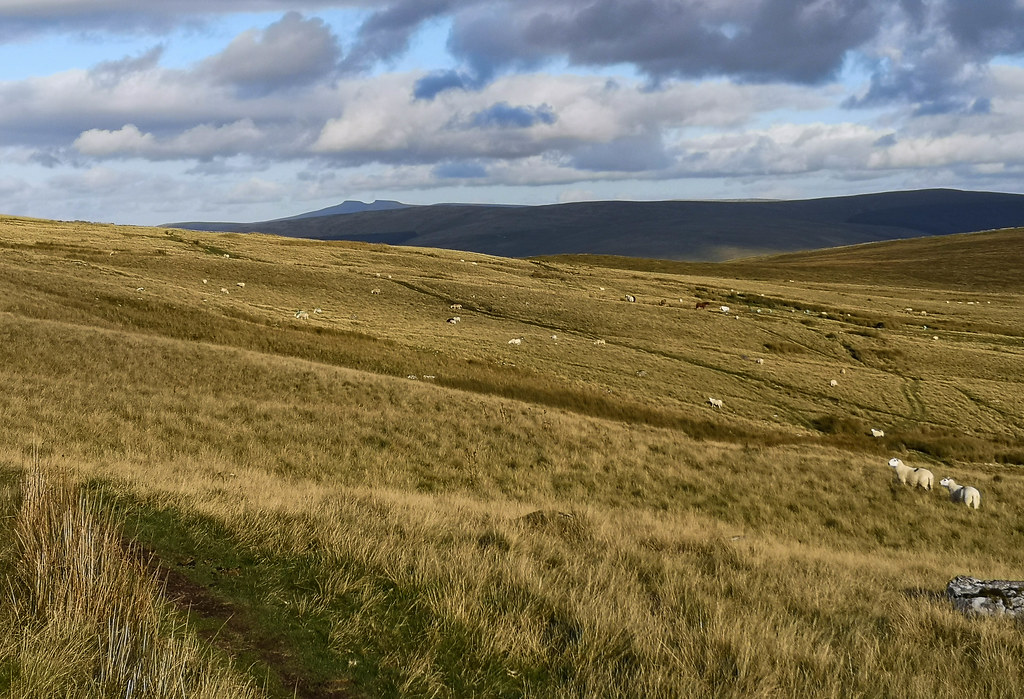 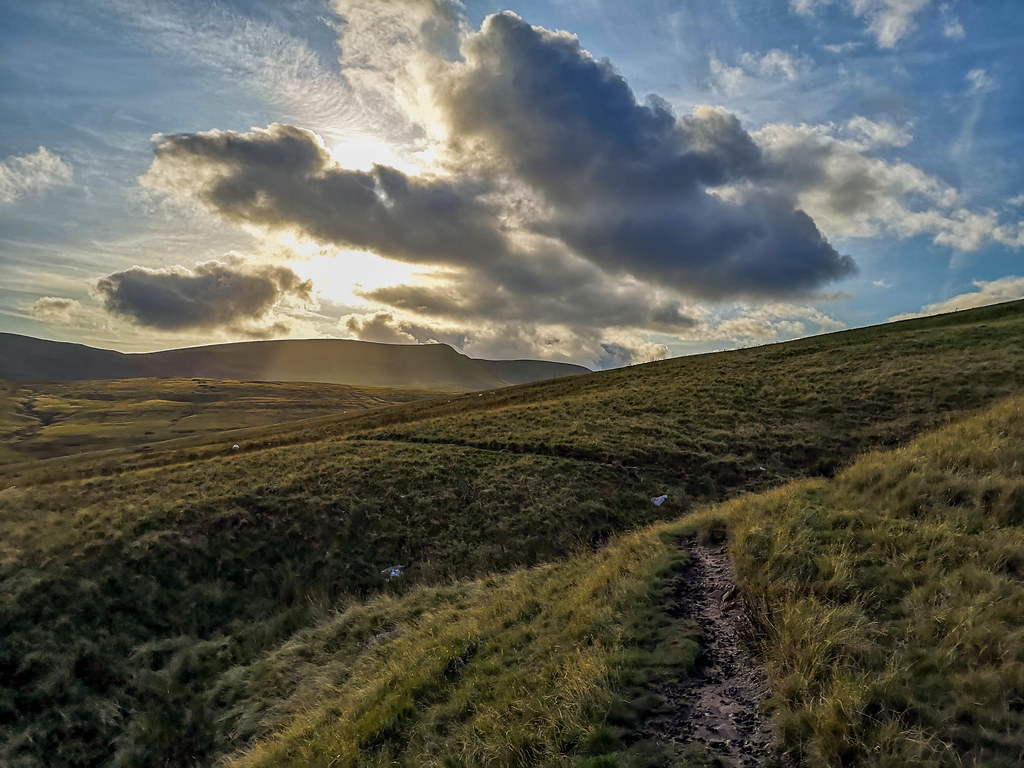 Hopping over the wettest bits, and crossing a stream, I soon reached the steepest section, which was pretty damp. The biggest problem, though, was that the angle of the sun was almost exactly the angle of the slope, and it was reflecting off the wet ground all around me. I could hardly see anything, and quickly lost the small path ahead. This didn't really matter, and soon enough the slope was lessening ahead and the steep cliffs of Fan Brycheiniog stood ahead of me.

A couple of years before, me and my mate Nige had climbed the hill from the other side on a lovely sunny day, to sleep under a tarp on the summit. The only problem being that literally 3 seconds after we summitted, the clag poured over the top and we saw no more. After surprisingly comfortably surviving a night in a tiny hollow just below the top we awoke to proper rain and got the hell out of there. On our descent I'd briefly glimpsed, through the mist and rain, a tent perched by a little knoll sticking out into Llyn y Fan Fawr. Somehow it had lodged in my brain, and now I was there, alone, with my tent.

I'd intended to nip up to the summit first, but as I was so late, I opted to camp straight away, to better savour the surroundings before night imprisoned me. It was a lovely spot, and the little tent goes up extremely quickly. 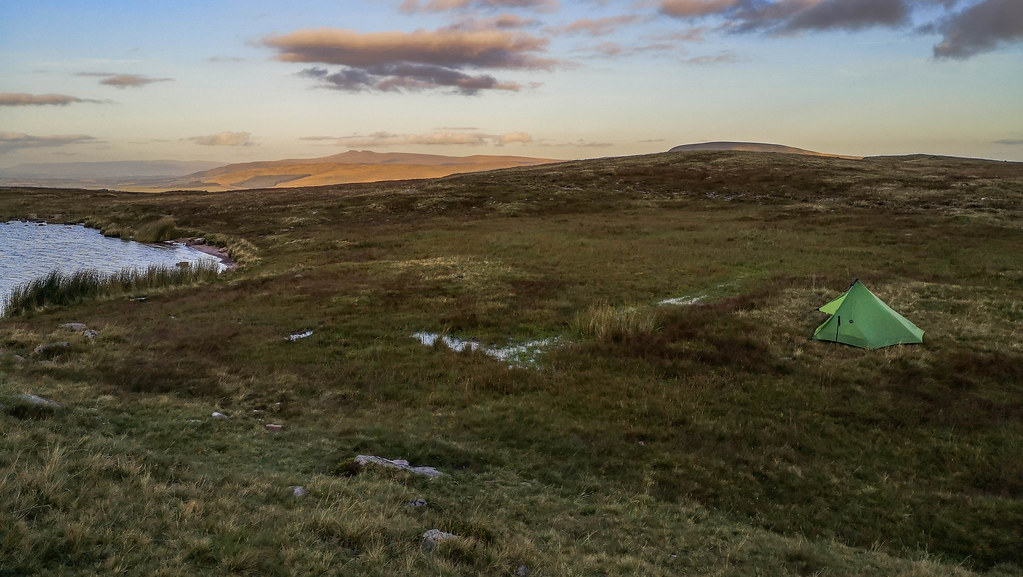 Its a Six Moon Designs Lunar Solo, bought off a mate who'd proved a little large for it (he is, after all, a former England Youth rugby player). It weighs about 750g with a few extra pegs and lines, is single skin, and uses a trekking pole. Once up, it is extremely solid. I'd used it a couple of times wild camping near home, but this would be its first hill use. Its actually remarkably spacious for a 5'10" bloke, the rucksack easily fits inside with me, and the porch is of a decent size. 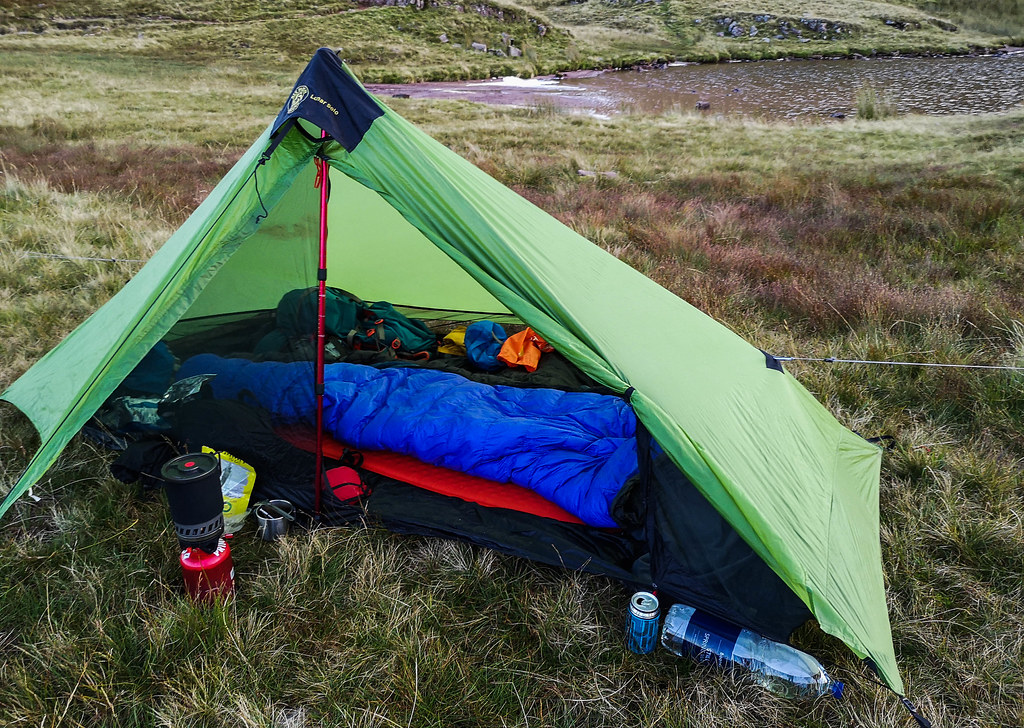 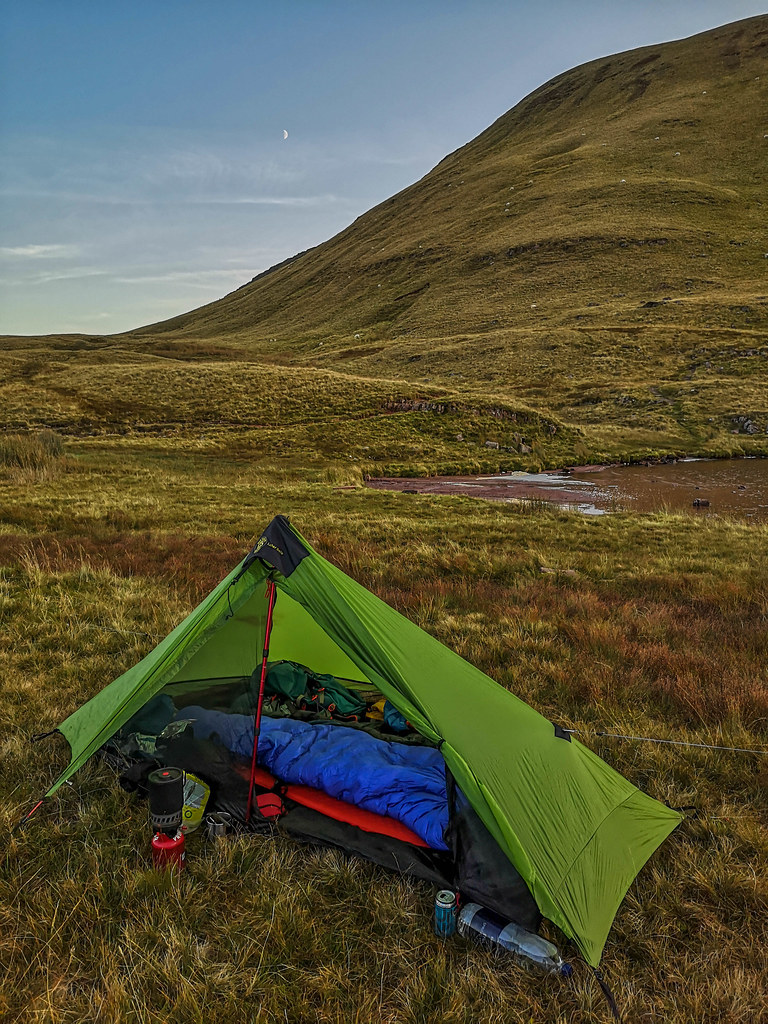 After a quick meal, not the best I've eaten (which is one reason we don't often travel light!), I took my one can of Pale Ale for a quick wander to enjoy the last light. What a spot this is, and I was enjoying being up there all alone, not a soul on the hill. The distant Brecon Beacons were clear in the east, but my eye was drawn always to the hills above, behind which the sun was rapidly dropping. 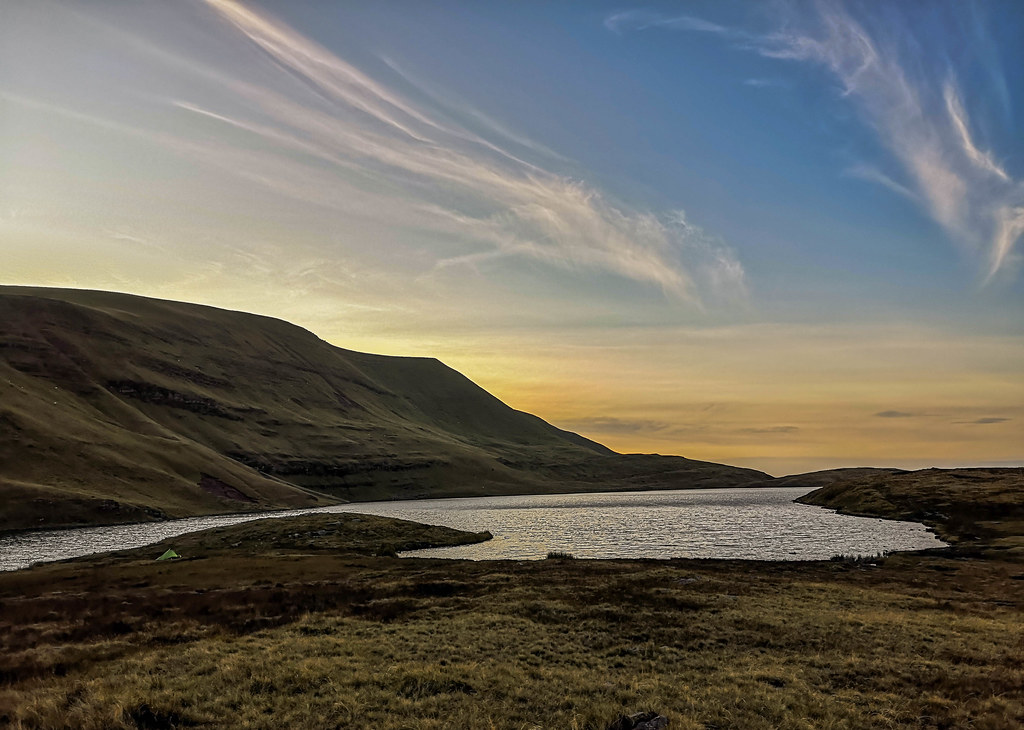 With darkness came the cold. There had been a moderate breeze already, but this was forecast to become quite strong. One of the reasons I'd chosen this spot was that the hills lay between me and the direction the wind would come from, but I knew from past experiences that in these places the wind will always find you, and probably be rather swirling. I retreated to the tent and made myself comfortable with a long night ahead.


After reading for a bit, I eventually decided it was time to sleep and quickly drifted off. This didn't last. For though the Lunar Solo was rock solid, the taut fabric was being played by the wind like a kazoo in my right ear. Here, just above my head, the tension in the fabric caused a slight crease to resonate. Not flapping, more singing. Badly. As always in these situations, I lay there for a while hoping it would go away. I should probably mention at this point that I'd forgotten my ear plugs. And my torch. And the spare torch, which is always in my first aid kit, was in my first aid kit. The part of said kit that I'd jettisoned to save weight at the car, bringing only the actual first aid bit, not the foil survival bag and torch which share its drybag. Eventually, I did force myself out to fiddle with tension, but I never really solved it.

The rest of the night passed fitfully, even though I nearly always sleep well in the wild. The wind was strong, but not enough to worry me in anyway, it was just annoying for it was indeed swirling around the shallow cwm below the Fan, and you could always hear it building and coming towards you to play that musical instrument in my ear like some kind of torture. At some point I looked at the weather forecast. Which said heavy rain would be added to the wind at 8am. From then on, I just waited for first light, the cloud was already down and flowing under the fly of the porch which is quite high off the ground. Not a problem for me, the mesh door actually keeps out a surprising amount of dampness and wind, and despite my close single-skin quarters, there was very little condensation inside; there are vents all round the base of this little tent.

Black became grey and I got the coffee on. Breakfast was quick, and I was soon ready to drop the tent. 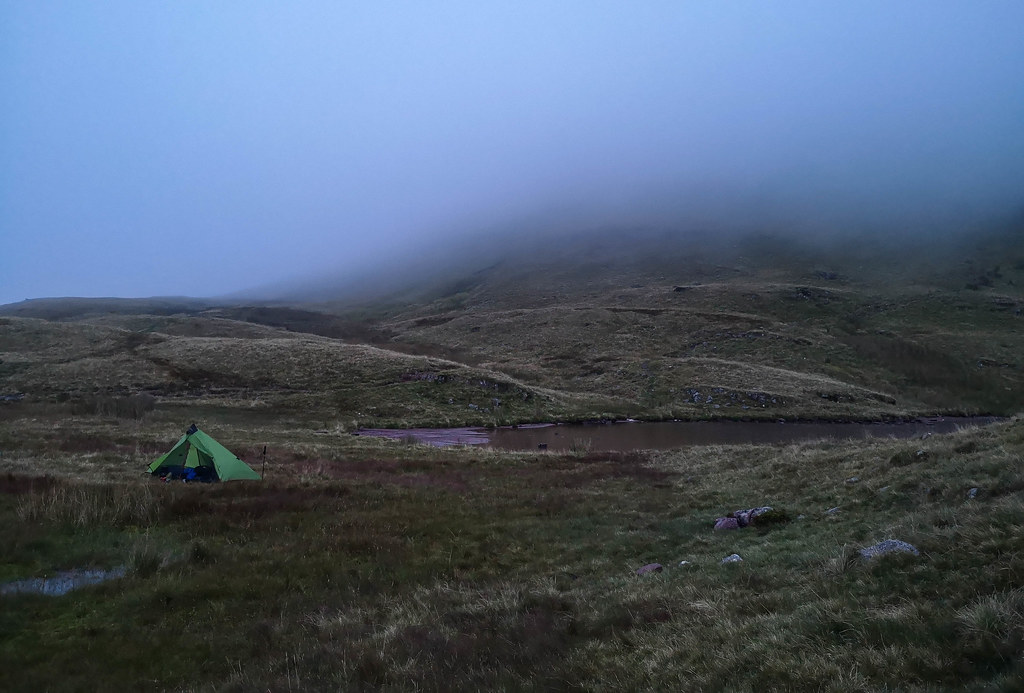 This took no time at all, that's one massive advantage with this little tent. In fact, apart from the vibrating fly, its a super bit of kit. I just need to remember the ear plugs!!!

I pretty much ran for it, all thoughts of grabbing the summit first gone. Not much over half an our later I was approaching the car, the hill behind clad in cloud. 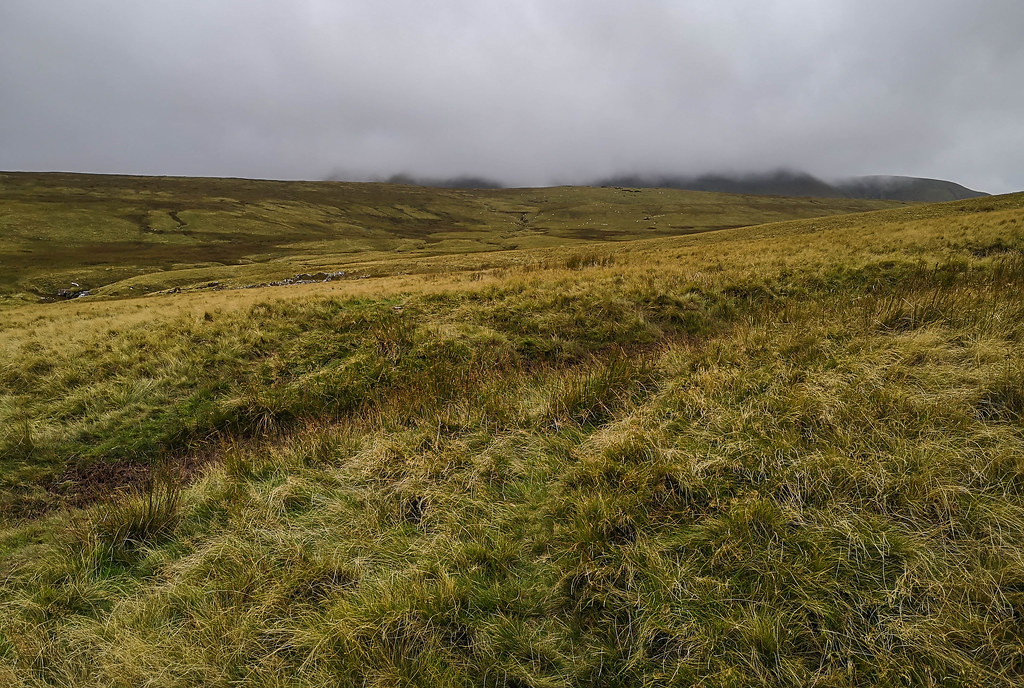 As my hand touched the car door handle, the rain started. It didn't stop until mid-afternoon, by which time I'd had a second breakfast in Brecon and moved to a very posh campsite for the next few days canoeing. For which the good weather returned, but that's a different story on a different website!