As soon as travel restrictions were lifted, like, I guess, every other keen hillwalker, I was champing at the bit to get back out into the wild, and immediately started looking at possible routes.

Being very conscious of my complete lack of any kind of hill fitness, I thought that one sensible criterion would be not too much of a travel distance, so that I'd have plenty of time in hand if progress on the walk was slower than I anticipated. The other criterion was driven by an aversion to crowds: ie go for one of the much less popular areas/hills/routes, in the expectation that more well-known places were likely to be thronging with hill-walking folk.

Which is how I ended up with a Great Whernside and Buckden Pike round, starting at the picturesque village of Kettlewell in Wharfedale. This also had the added attraction of being kind of home country - close to where I grew up. And, last but not least, I'd never visited Great Whernside; so another tick

Weather had been a bit iffy, and I'd also had some other commitments; but eventually a couple of days looked very possible - Thursday and Friday, April 21st and 22nd respectively. Travelling 3 hours or so home on a Friday evening when I imagined that the roads would be chock-a-block did not appeal, so Thursday it was. 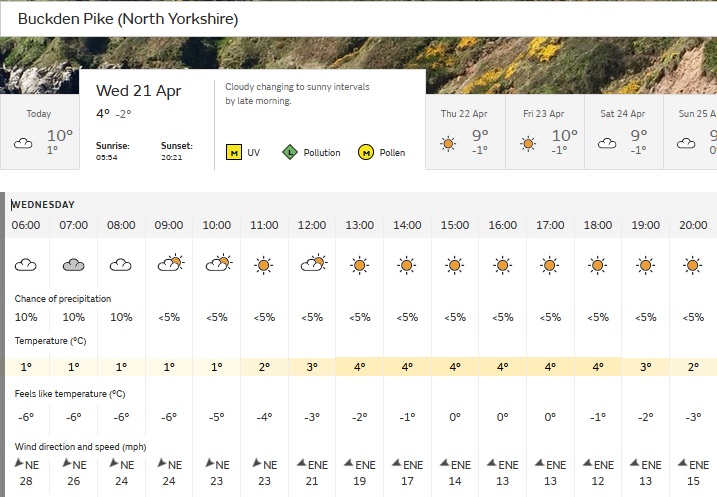 Looking at the forecast, the thing I focused on was the sunshine, completely overlooking the temperatures and wind speed at the exciting thought of being back in the hills...

Then - the icing on the cake - late on the Wednesday evening I was suddenly reminded that brother Andrew lives less than an hour away from the start point of Kettlewell, and although walking hasn't been his thing in the past, I knew that since retiring recently, he'd been working on his fitness and gradually getting fitter. So a quick call later, and we'd agreed to meet in the National Park car park at 07.00!

After so long away from the hills and the irrepressible excitement of an imminent return, a 3.30 rise was absolutely no problem at all, and a clear run on a beautiful morning saw me arrive in Kettlewell at about 06.50, giving me just enough time to scoff a bit of breakfast before Andrew arrived a few minutes later. 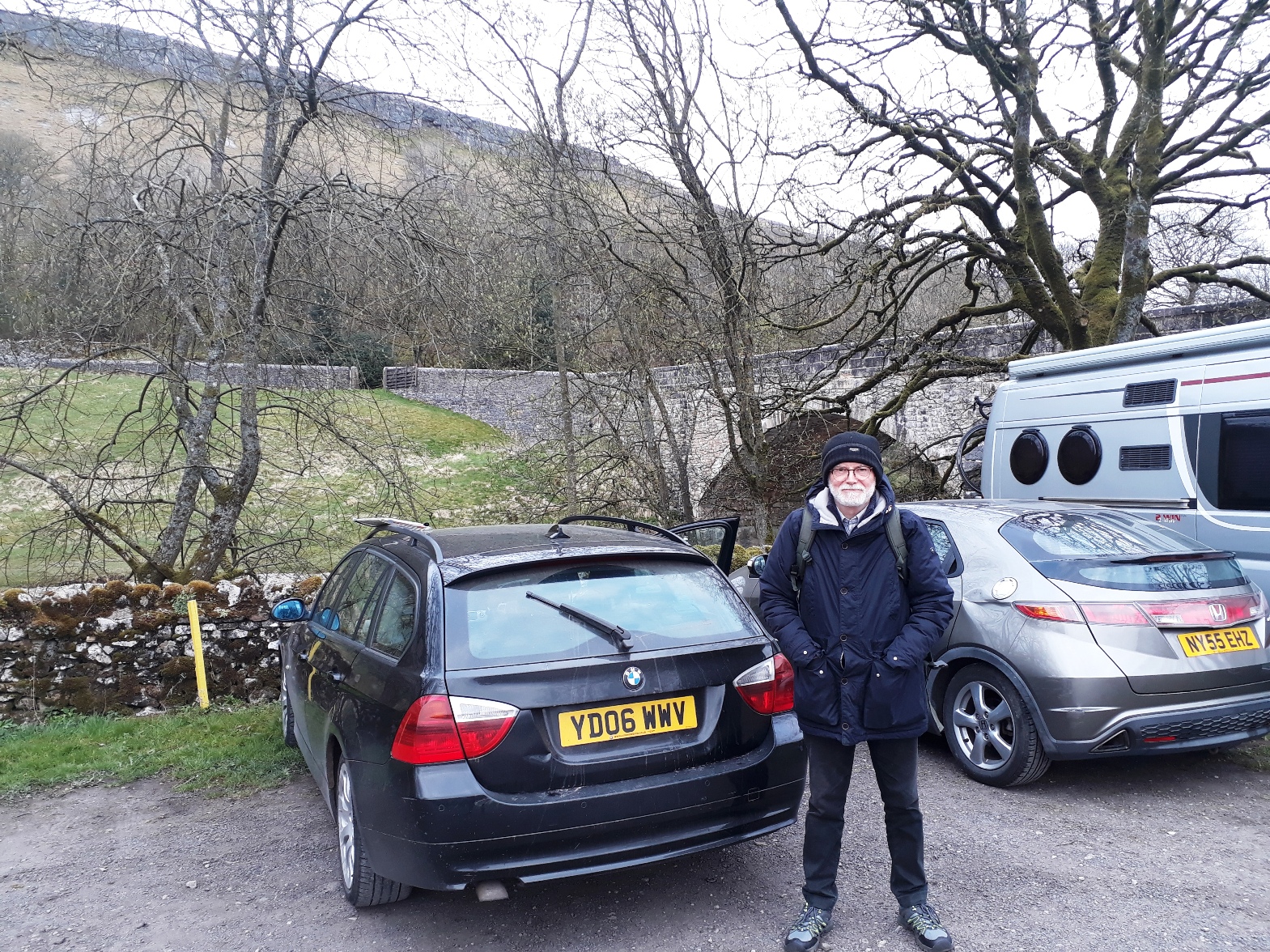 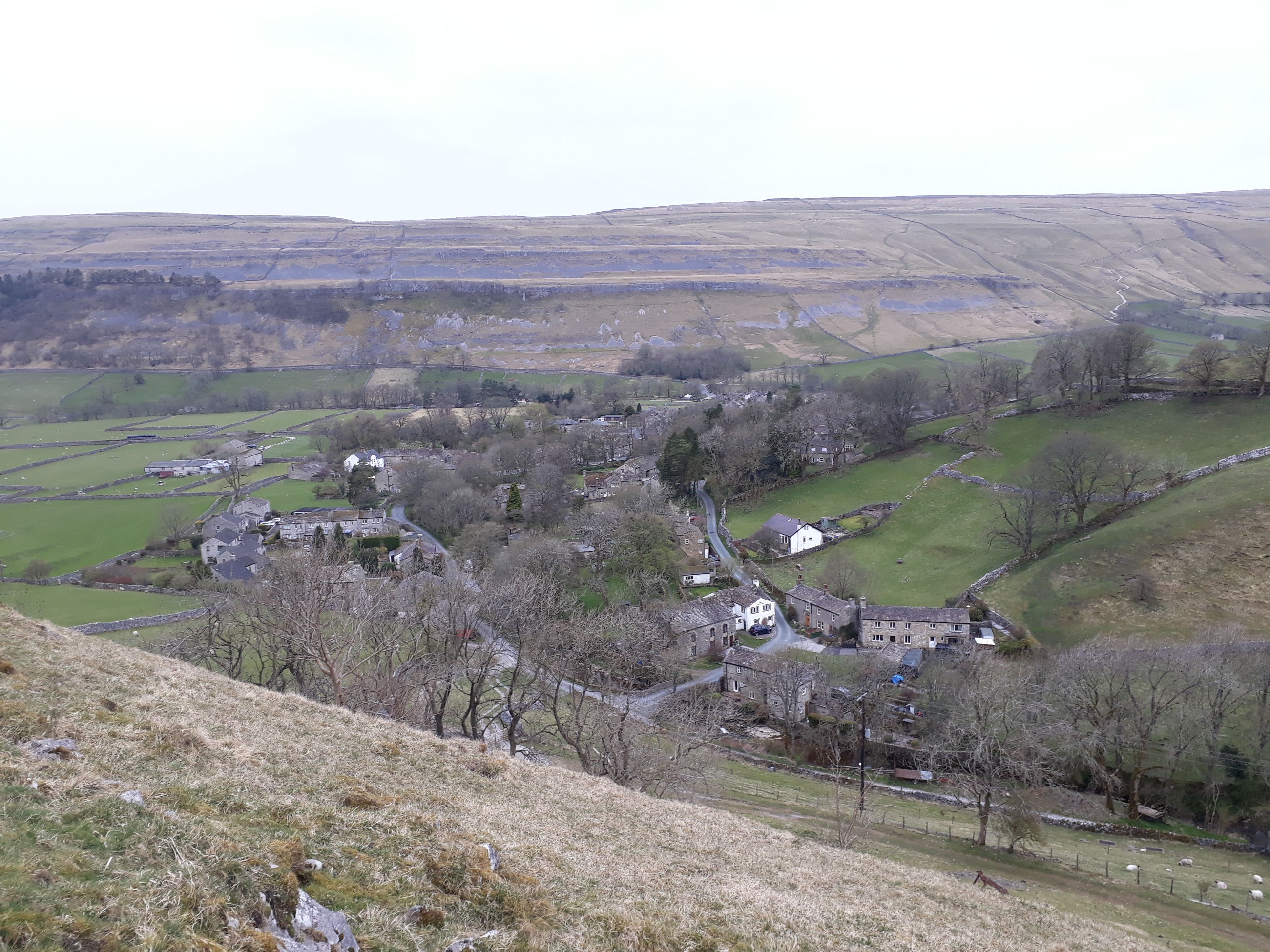 20210421_072131. A few hundred metres of road in the village, and then we took a fairly steep track up to the right - which afforded good views of Kettlewell. 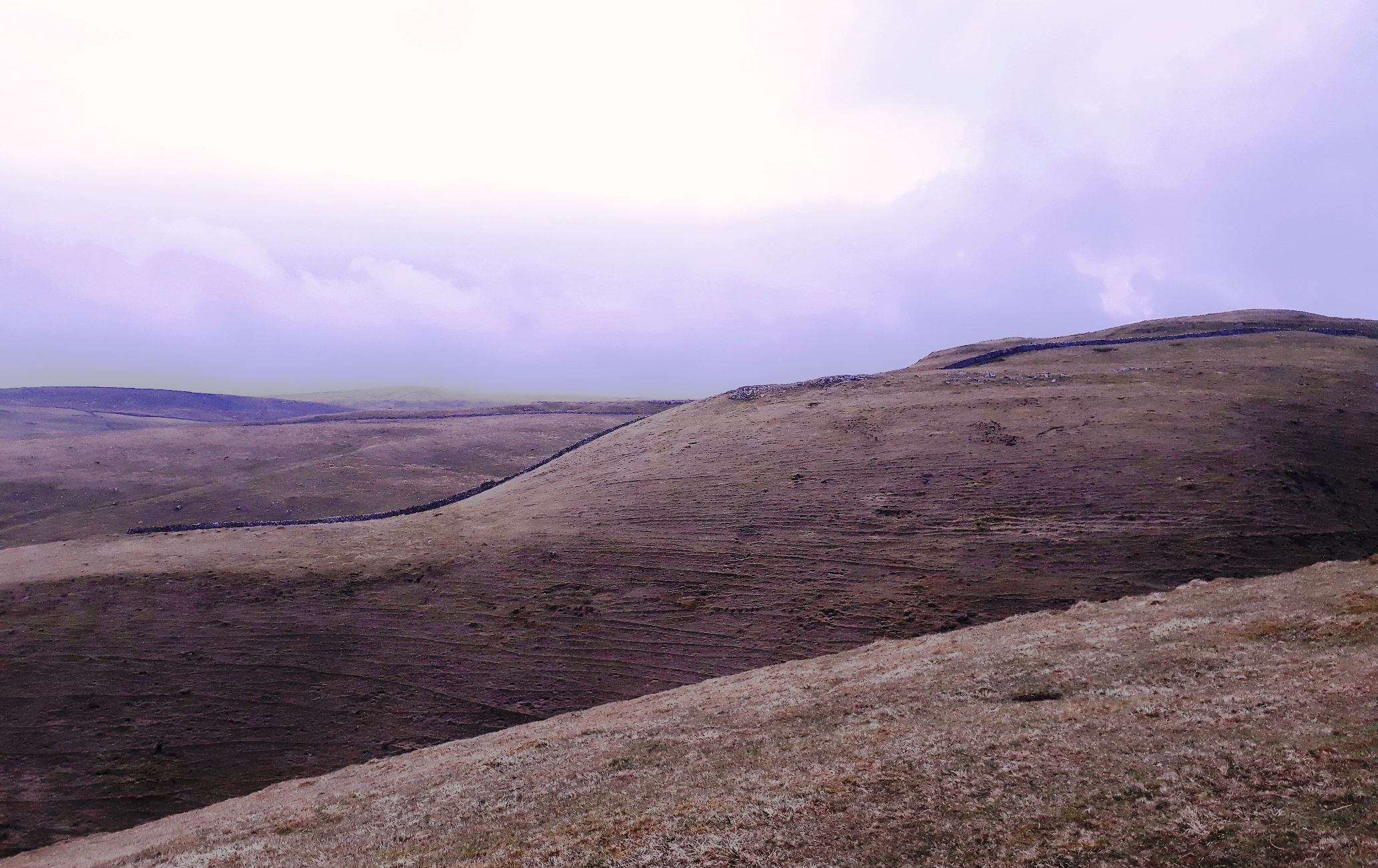 20210421_073139. About a kilometre later we bore off to the left, aiming more or less for Sweet Hill. This view is looking roughly north across Dowber Gill, the deep cleft in the foreground, a descent and reascent of which I was trying to avoid. 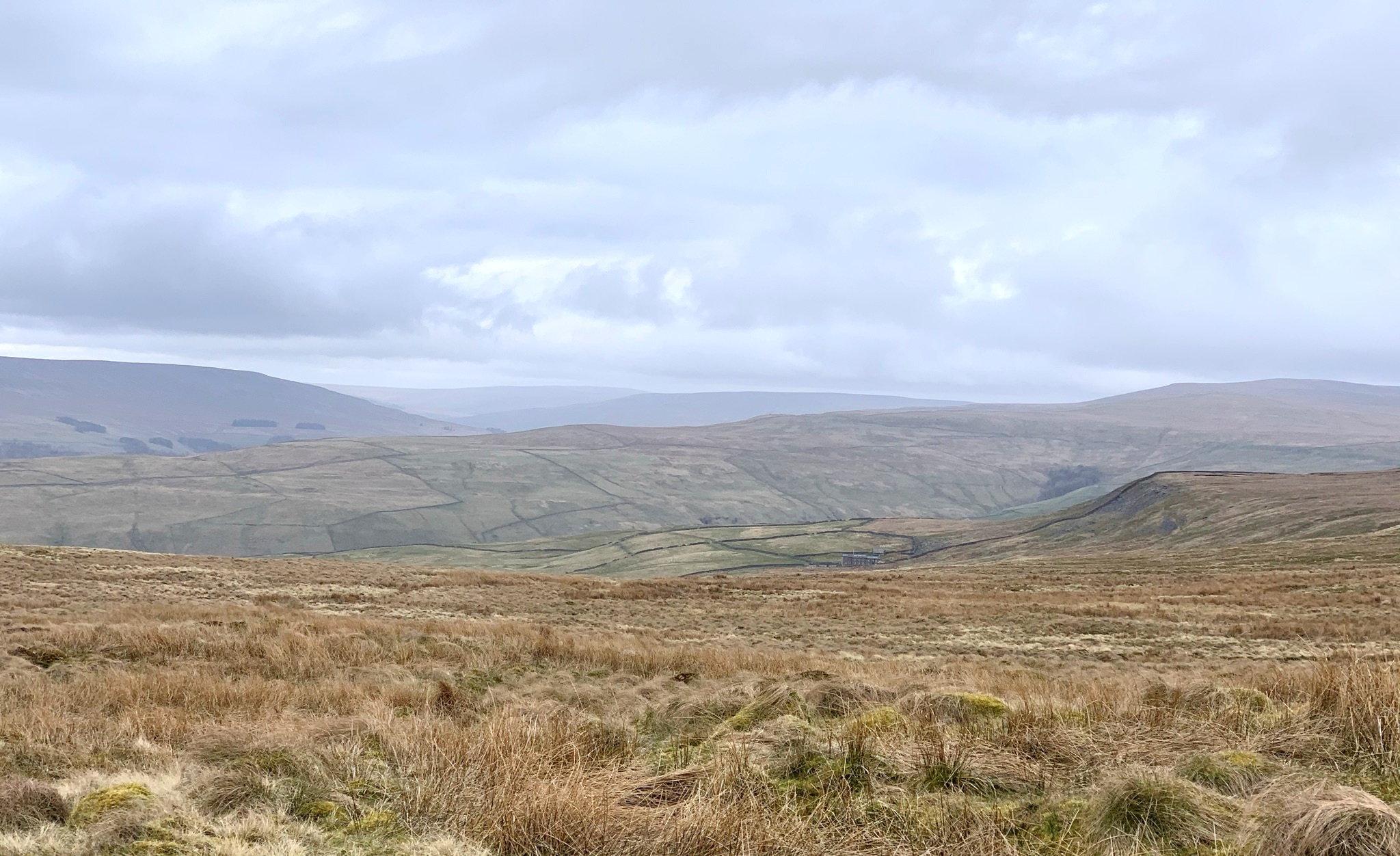 By now there was a pretty strong breeze, and my hands were getting very cold. On the basis of the most imperfectly assimilated forecast, I'd not so cleverly assumed that it would be sunny and warm. Must be just about the first time ever that I hadn't packed a pair of gloves 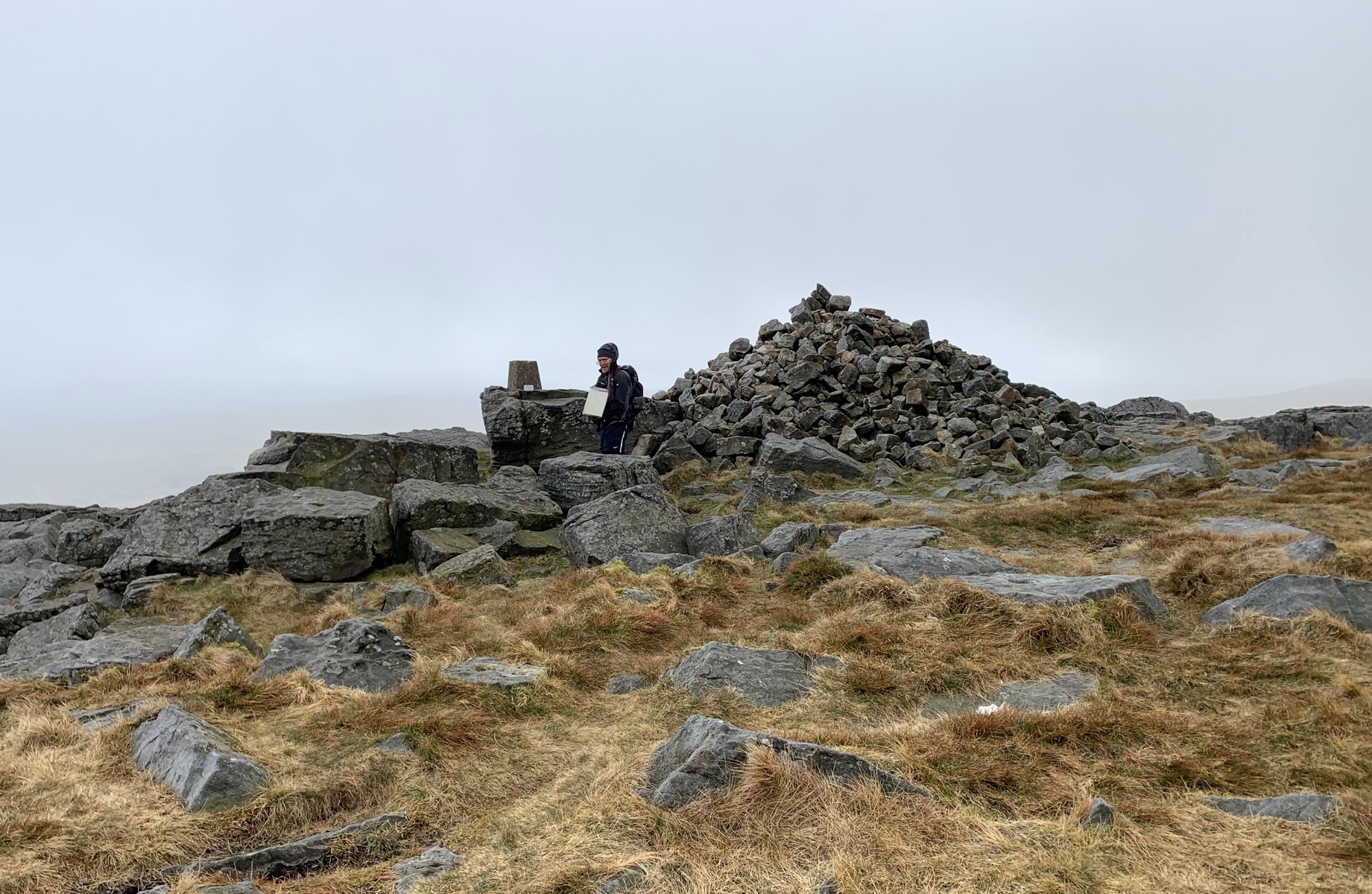 20210421_090312. Great Whernside summit. I couldn't feel my digits at all now, and I most certainly could not operate a camera; so we didn't hang around! The wind definitely felt to be matching the forecast 25mph, with much harder gusts. And with no sun and a slight mist, the air temperature felt to be around the forecast 1 degree, the effective temperature quite a bit cooler! 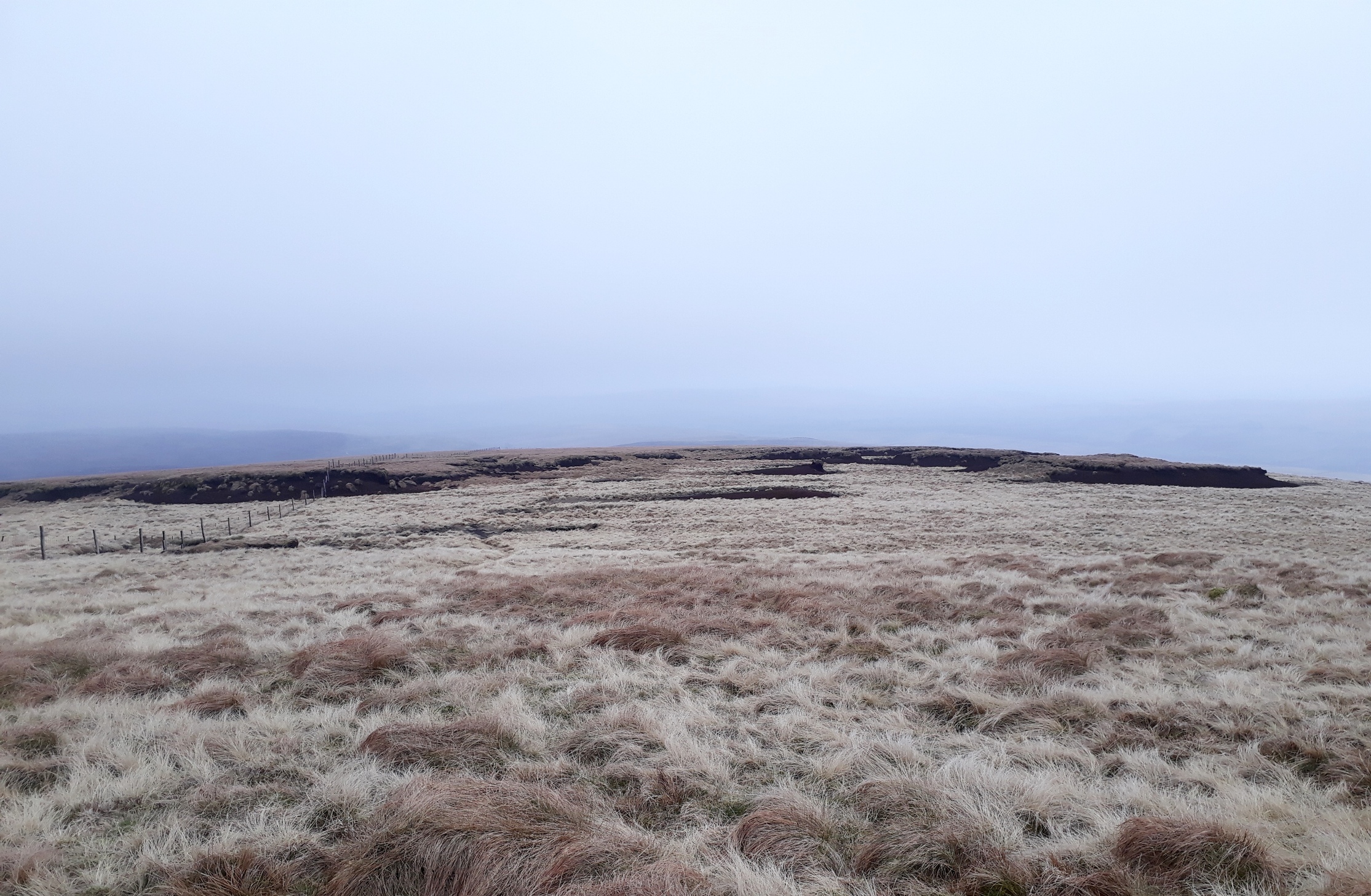 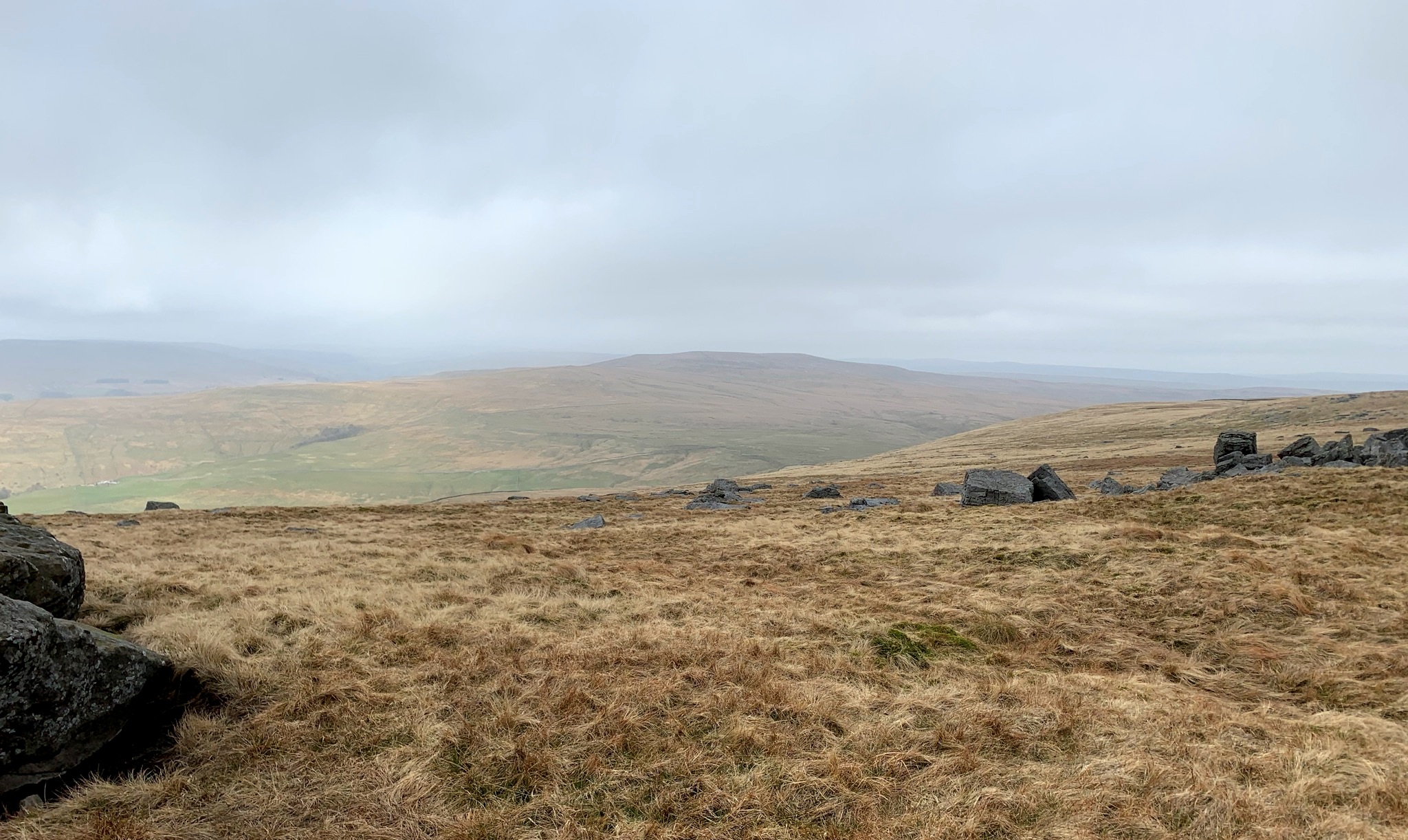 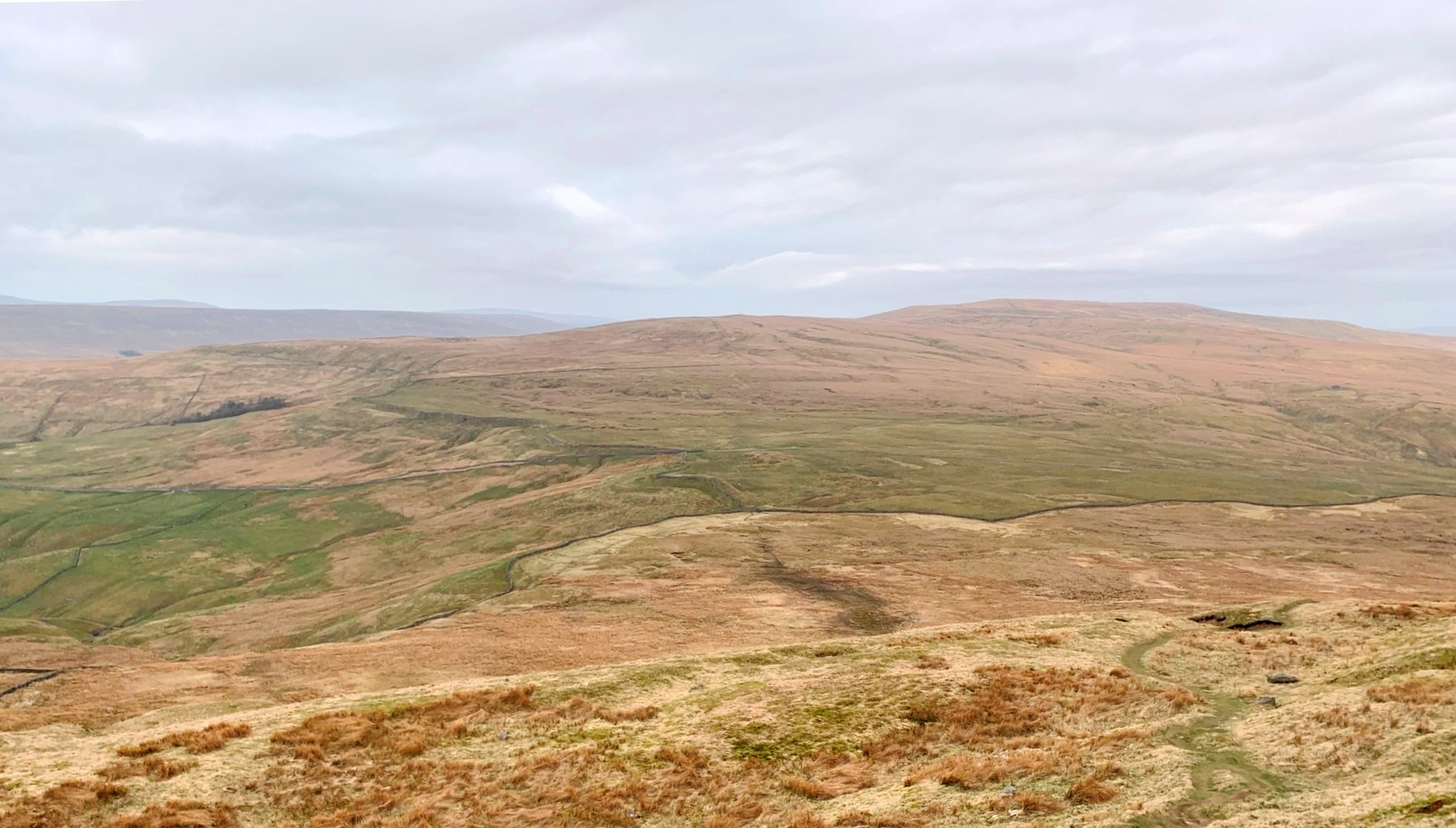 And a little further on, looking in the same direction. There's a pretty clear track down to the Kettlewell-to-Coverdale road. And as we descended, the wind abated, the cloud gradually dissipated, and the sun appeared at last

. In the background Tor Mere Top, our next destination, and Buckden Pike.

20210421_105136. Gradually swinging west, it was an easy descent to the road. This is the view looking back towards Great Whernside shortly before we hit the road. 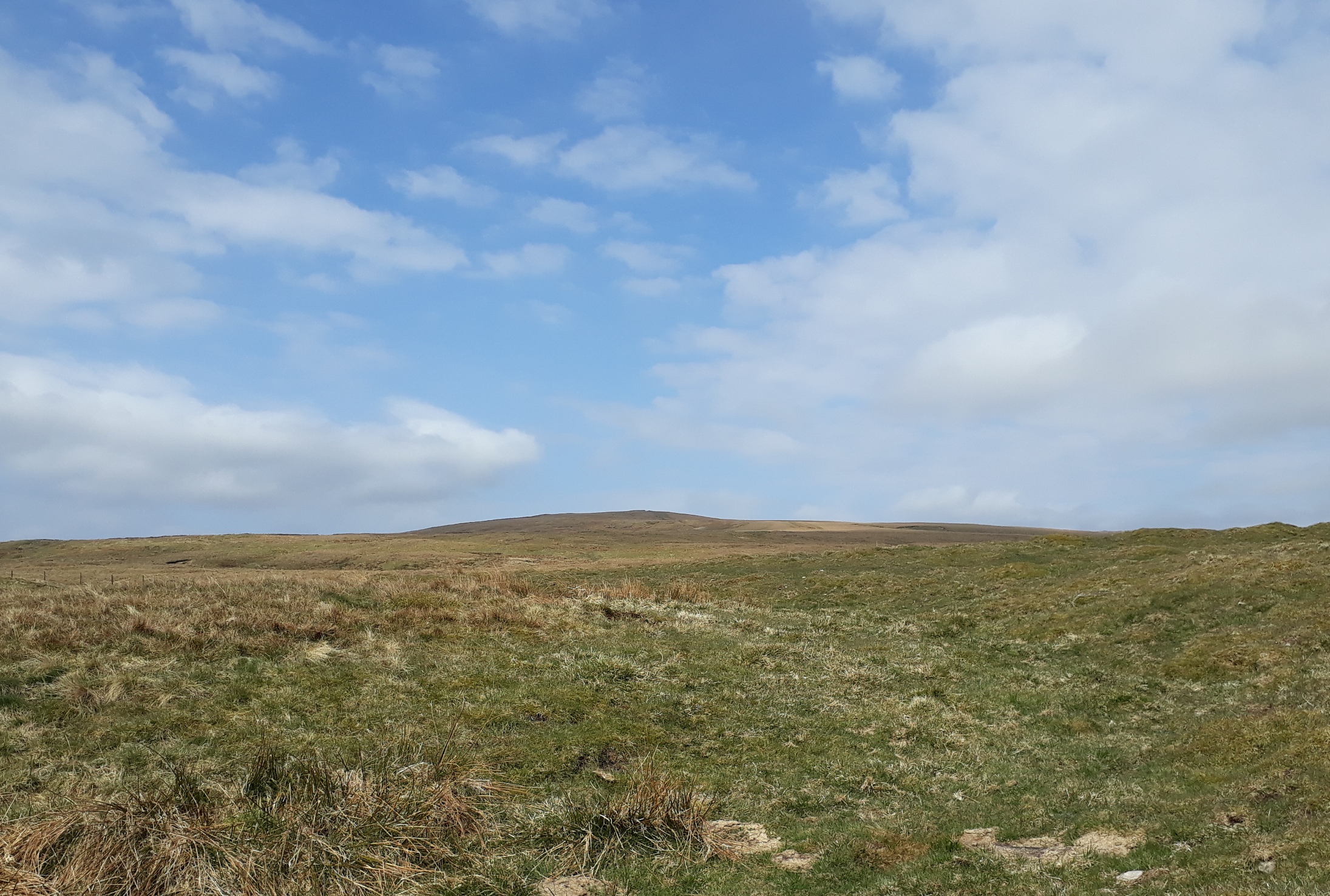 Now, dear brother Andrew get severe stomach pains if he doesn't eat regularly when he's exercising, and he'd brought a HUMUNGOUS great cake with him - at least 30cm diameter - to ensure that on this walk he didn't fall prey to the said stomach pains. So we stopped for a break in the shelter of a tiny gill, and he proceeded to demolish almost half of the cake! How he remains so trim I cannot figure out at all! 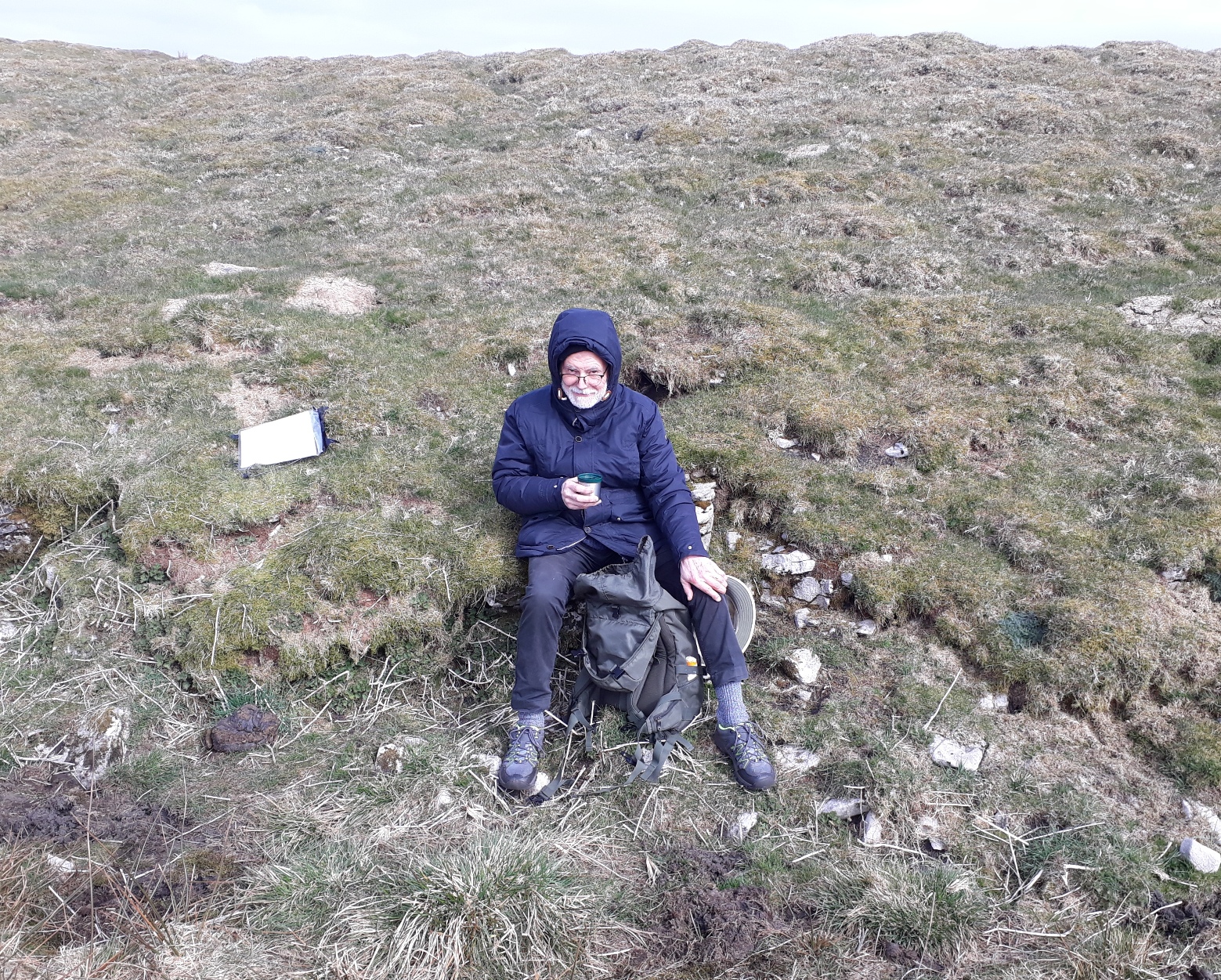 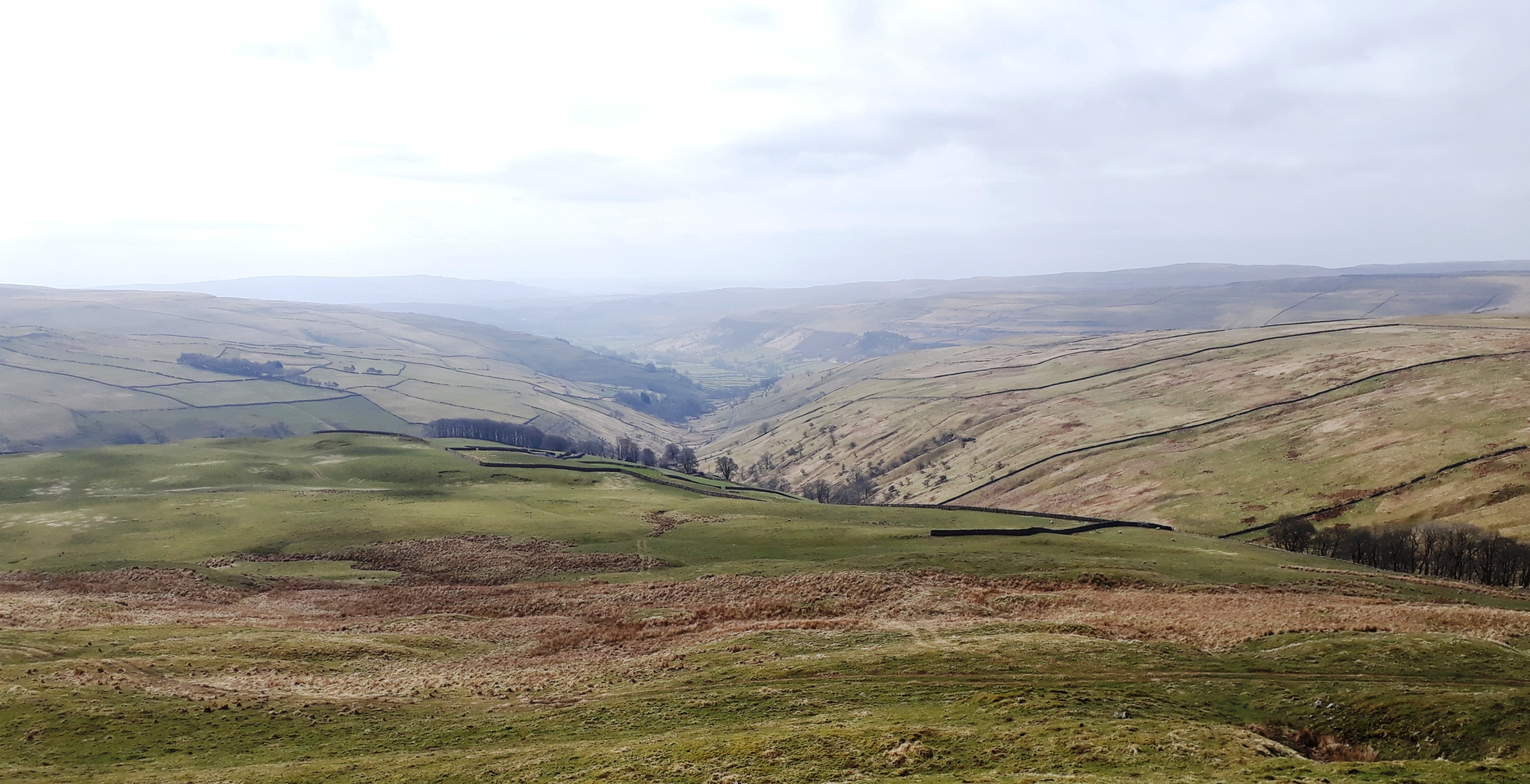 We didn't follow a path for the walk up to Tor Mere Top, so the going over the rough turf was a bit slow. But the sky was continuing to clear, and it was getting warmer 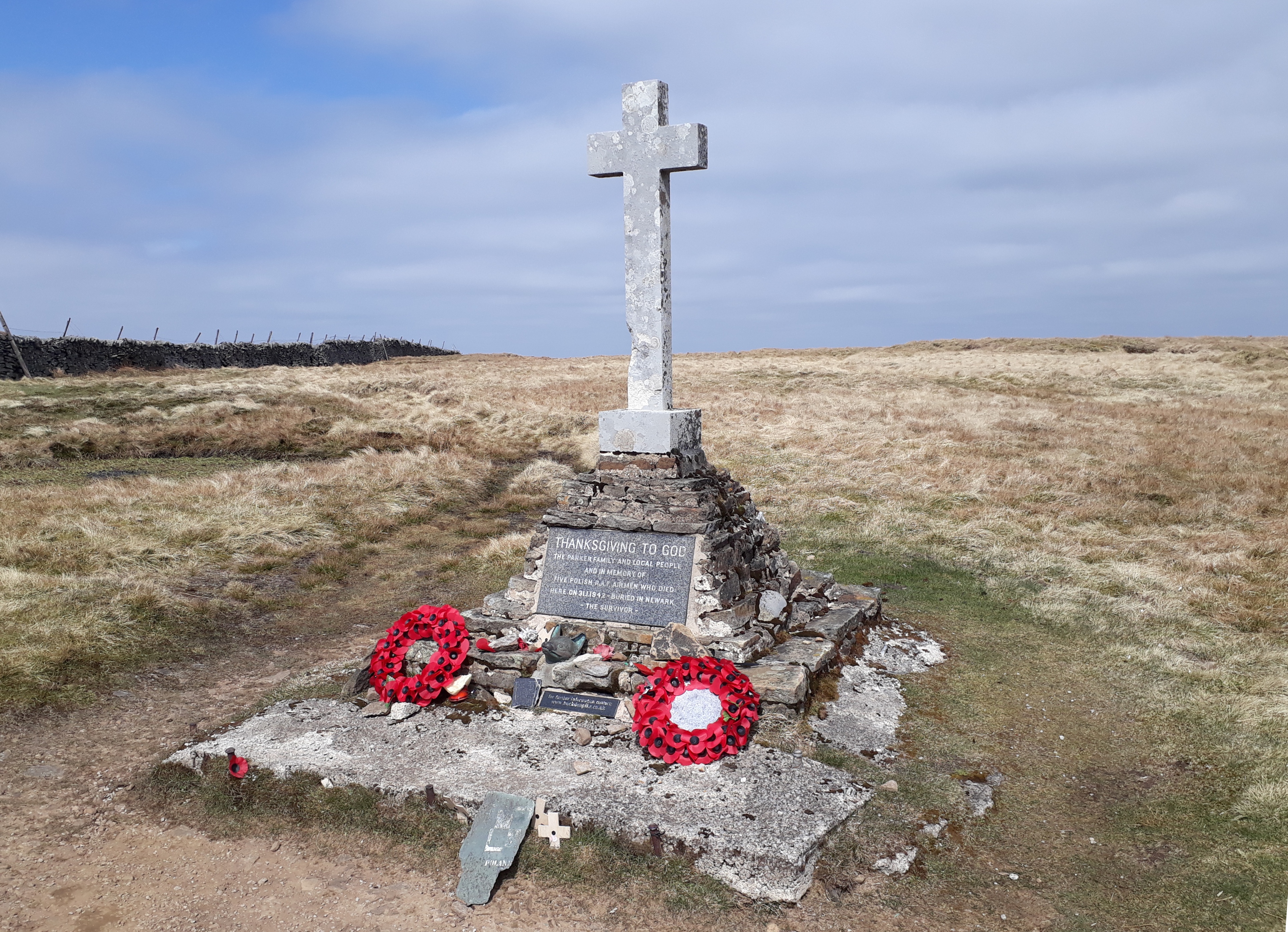 20210421_130619. About a kilometre south of Buckden Pike summit, the memorial to second world war airmen killed in a plane crash. There seem to have been so many of these accidents, I wouldn't be surprised if someone came up with statistic that there were more lost their lives this way than in aerial combat!

After this we more or less retraced our route back to the memorial, turning west shortly before, and joining the track/path that runs about 50 or 60 metres below the watershed to the west, and which eventually joins first the Starbotton Road - an unmetalled track, and then Top Mere Road - again, an unmetalled track. I normally prefer off piste routes, but given my creaking physical state, both Andrew and I were more than happy to be following an easy solid track; the fantastic views down into Wharfedale didn't do any harm either! 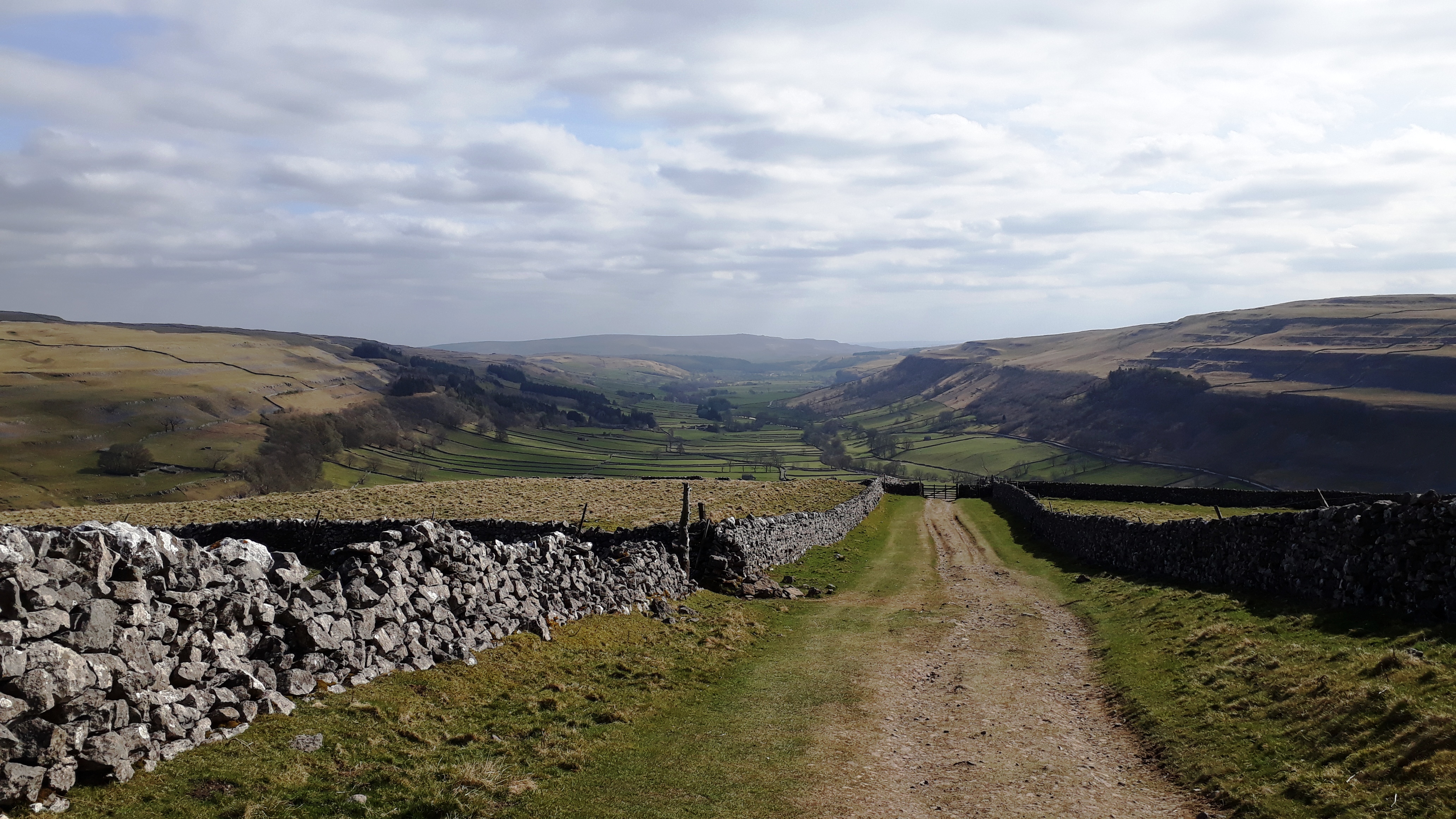 20210421_154351. Looking east again to Great Whernside across the rough pasture through which we approached it. 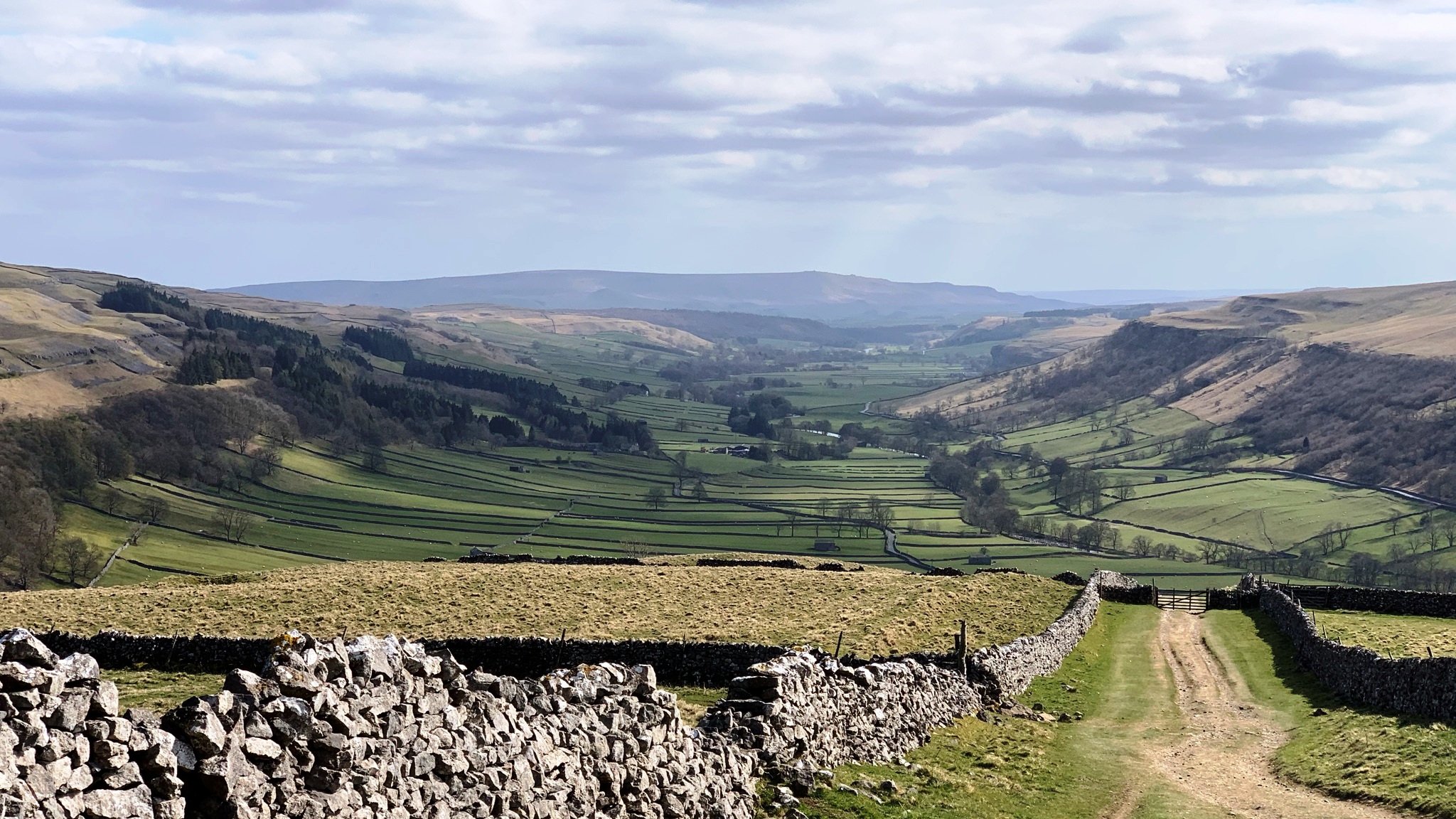 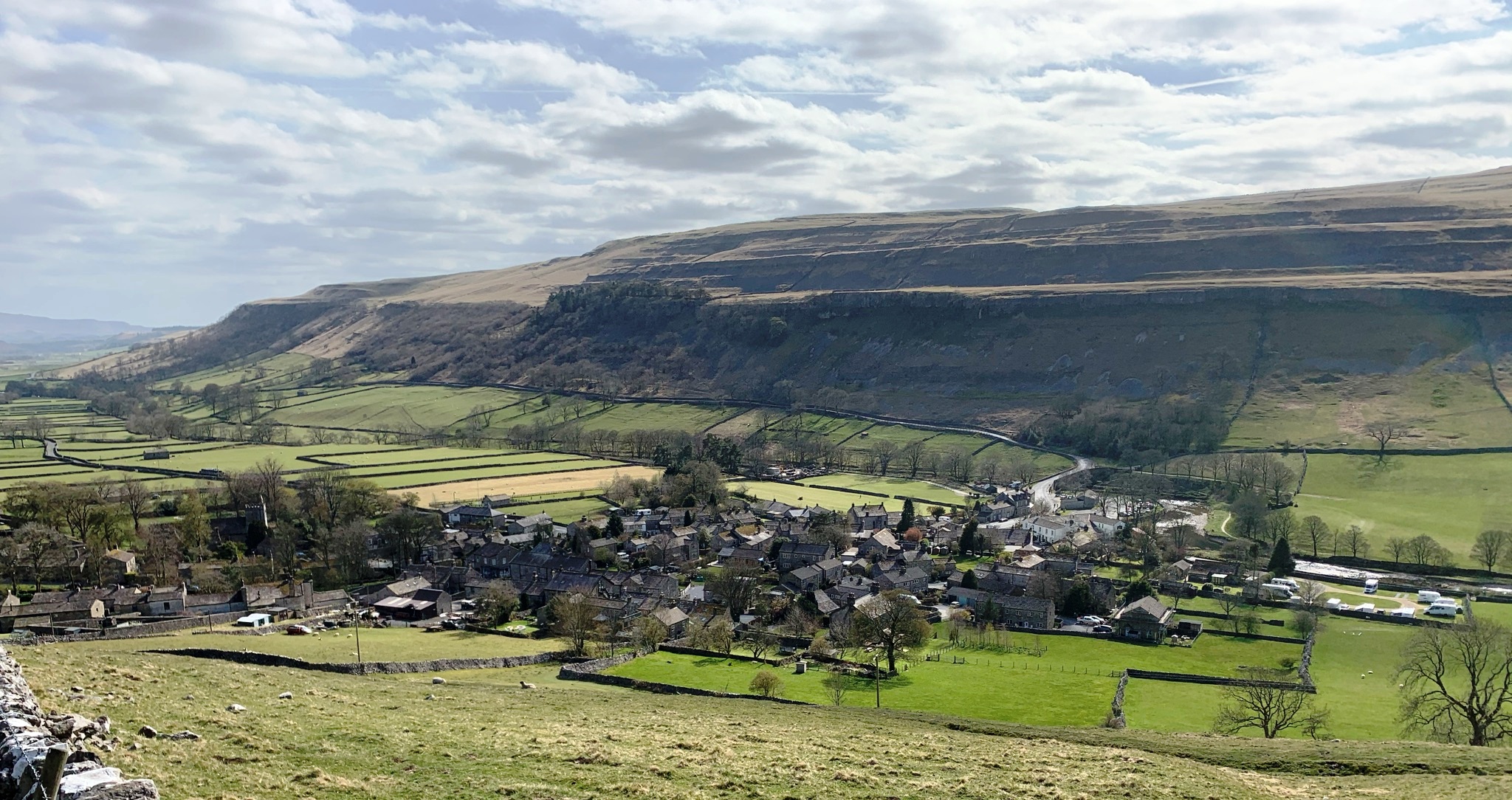 Sadly all establishments of cultural, historical and architectural interest in Kettlewell were closed. Pity - t'would have been a fine end to a fine day. 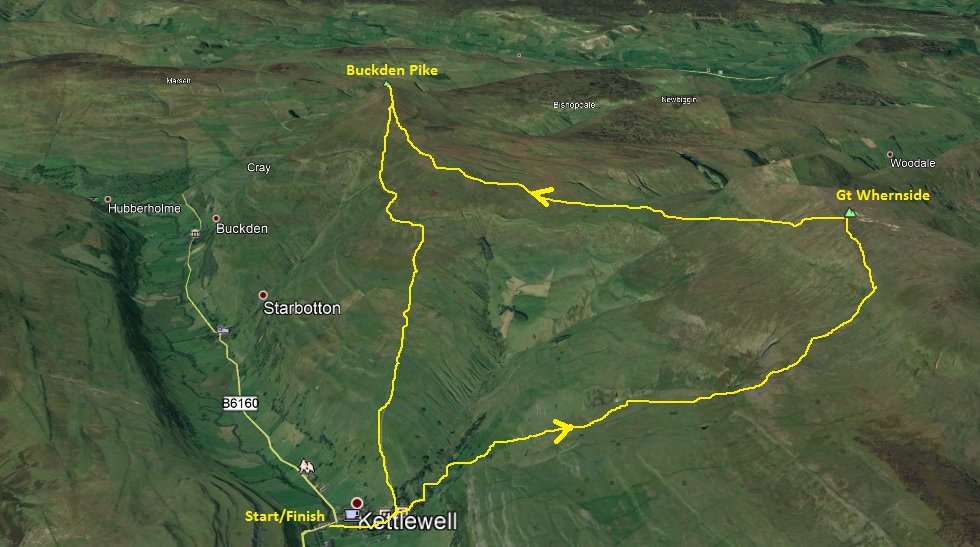