we had planned to go to Scotland for five days but watching the forecast for both West and East it looked a bit wild so we mothballed heading North and chose to use home as a base and have a go at some less visited hills.
So another foray into Wainwrights Outlying Fells was called for this time the Bannisdale Horseshoe which is next door to the Crookdale Horseshoe we did a couple of weeks ago hoping to see those fells from a different perspective.

Tops visited today, these are nine of Mr Wainwrights outliers

We set off from home early-ish hoping to avoid rush hour around Manchester on the M60, we failed miserably

very slow/queuing traffic from Birch Services all the way to the M61, after that, not too bad

We got off the M6 at junc 39, headed South on the A6 to find a little parking spot off the road around Muddybrow Plantation, found it easy enough, got ready and were off walking by 09:15 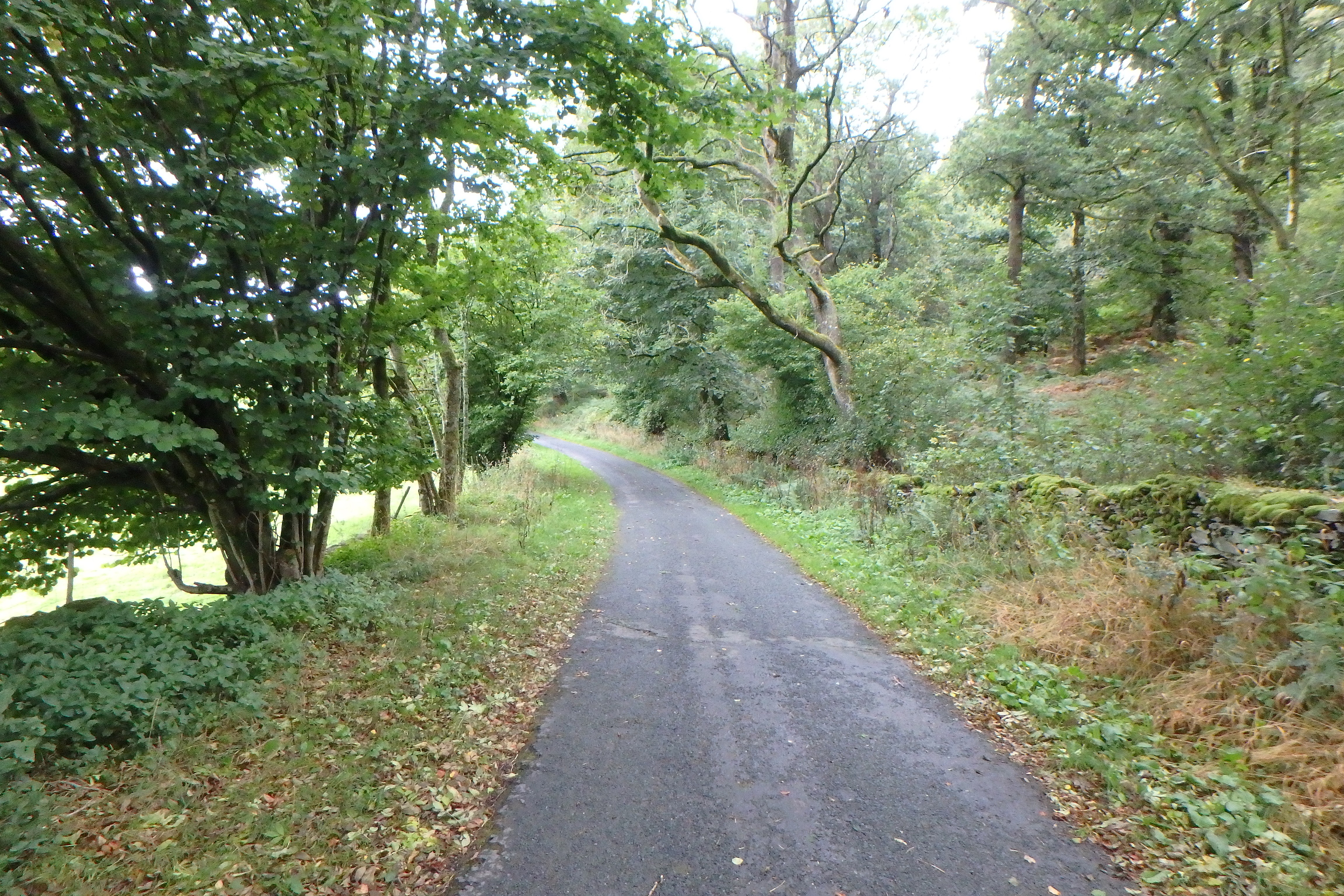 then took the Old Shap Road to Plough Farm then onto Mosergh Farm where we took a track heading north-ish towards Whiteside Pike, the first of our outliers for today. 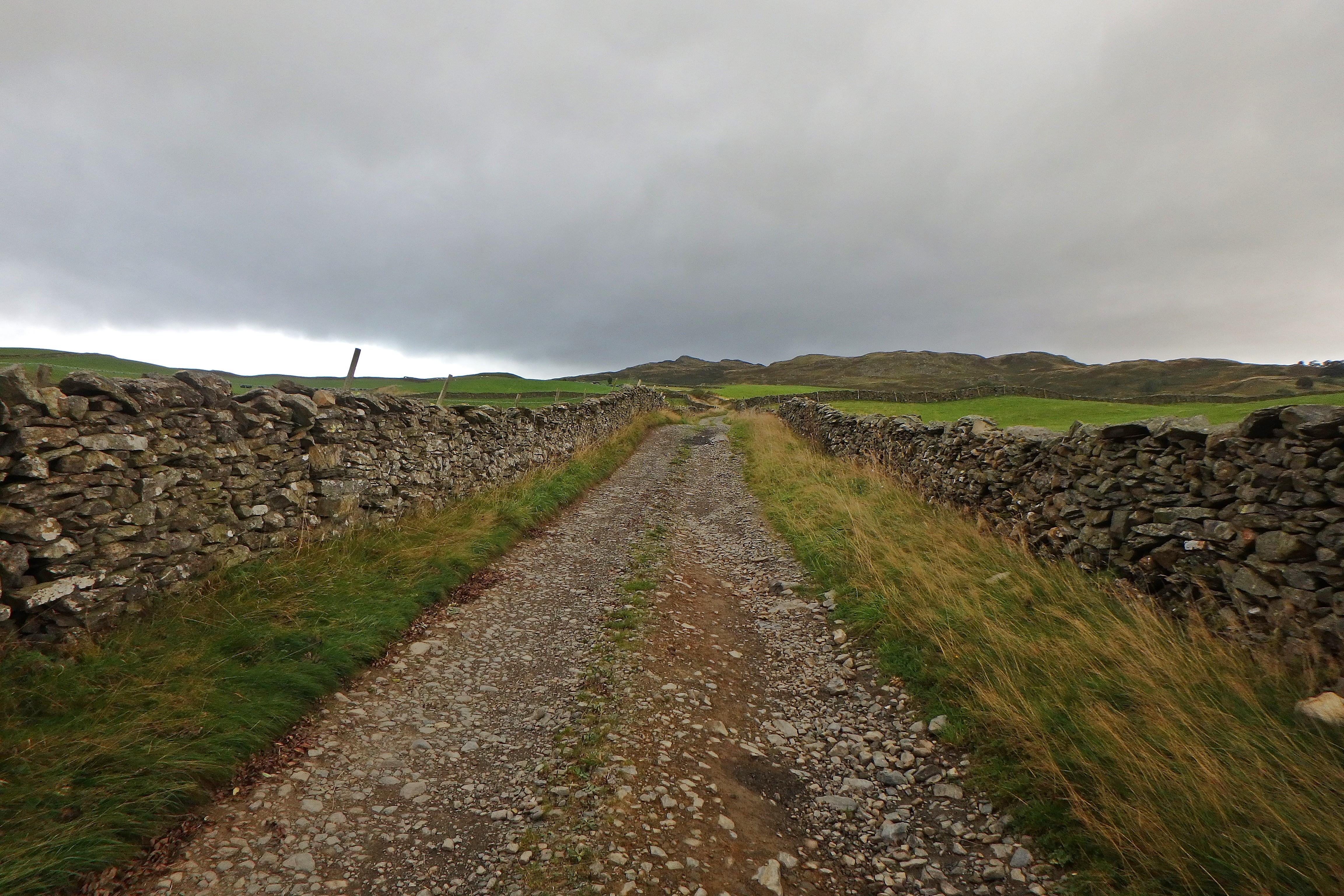 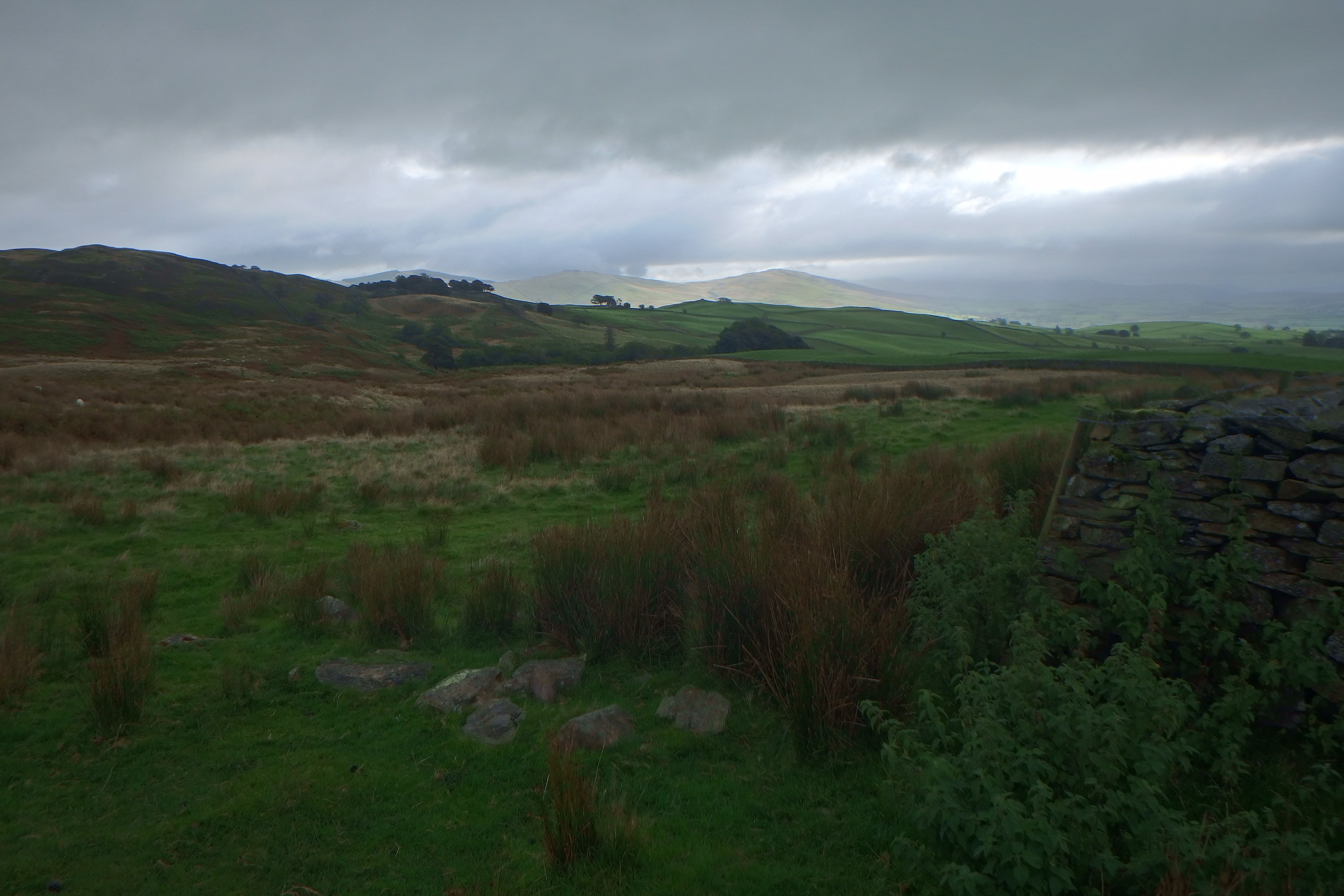 From below the top of Whiteside Pike can be seen quite clearly, 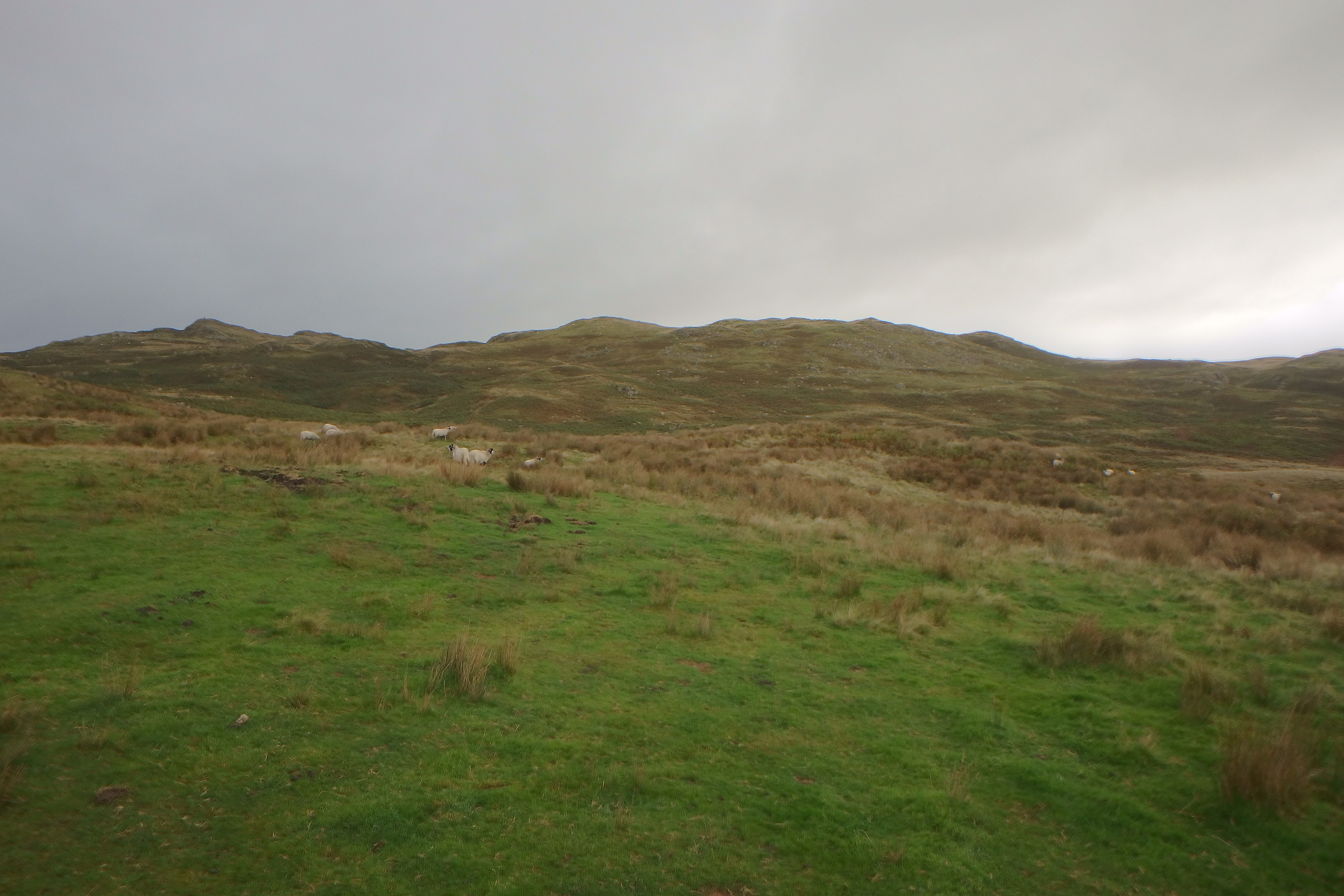 We could even see the cairn. We turned off the track at around NY522009 and headed straight for it, there's a path, initially through the bracken and then open fellside, keeping the cairn firmly in our sights (you can't miss it by now

) we arrived on the top in no time at all. 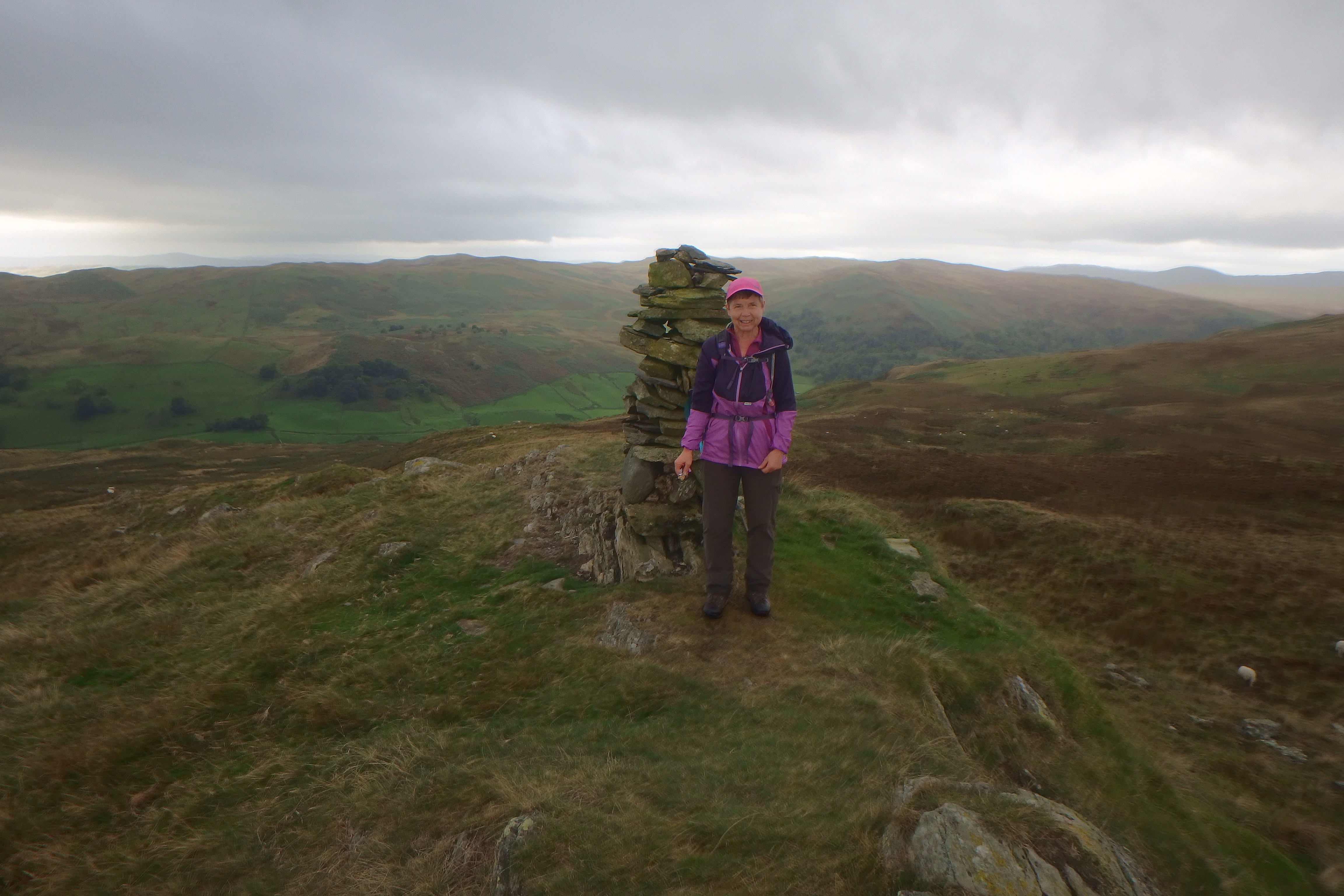 From the cairn you can see most of the route. 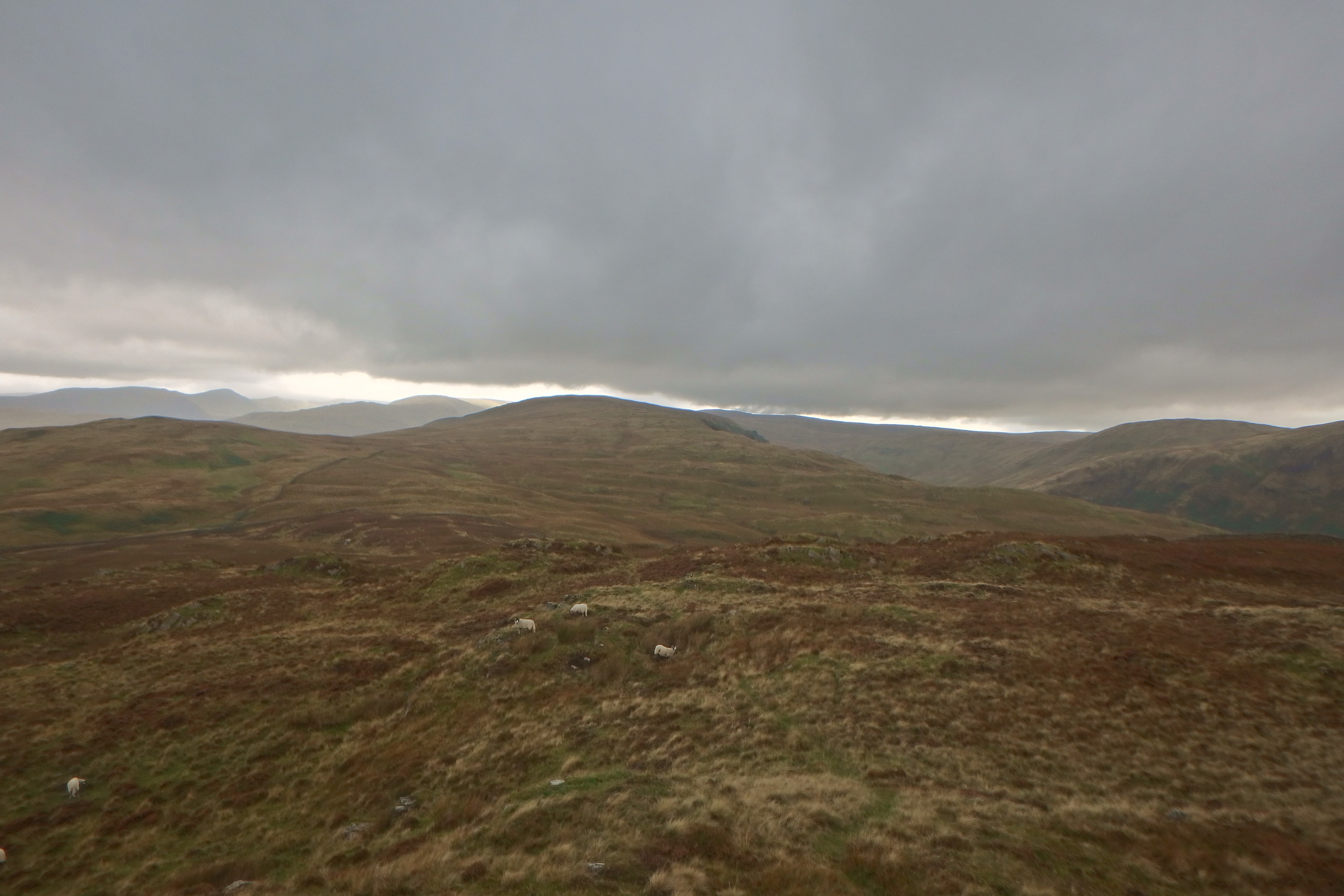 White Howe and Nameless No3 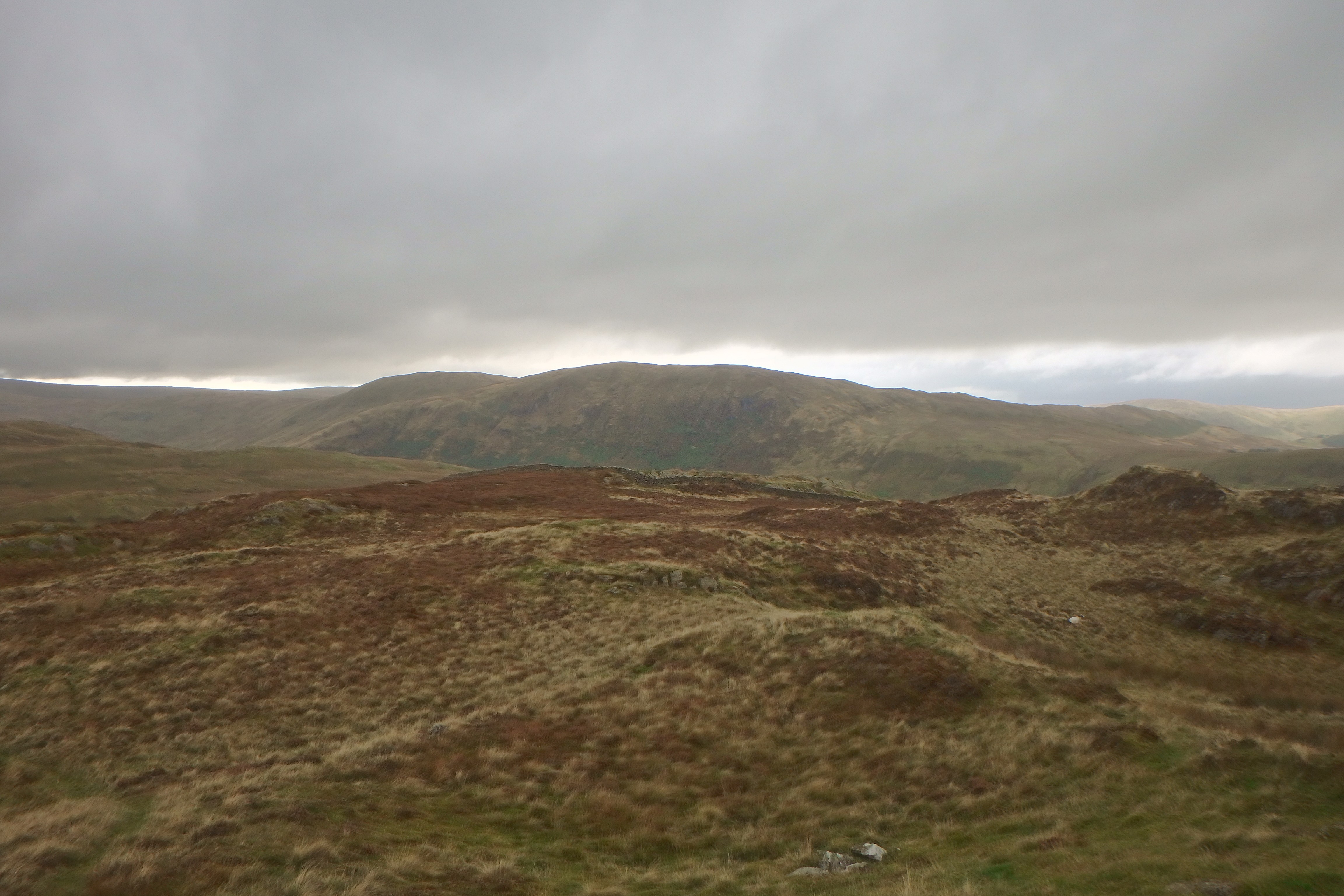 Todd Fell was next so after a short break we were off.
There's a path, easy to follow to start with, this lead to a stile in a wall and continues through the long grass on the other side, we lost it as we started our climb up Todd Fell but all we had to do was head uphill until we found the little cairn marking the top. 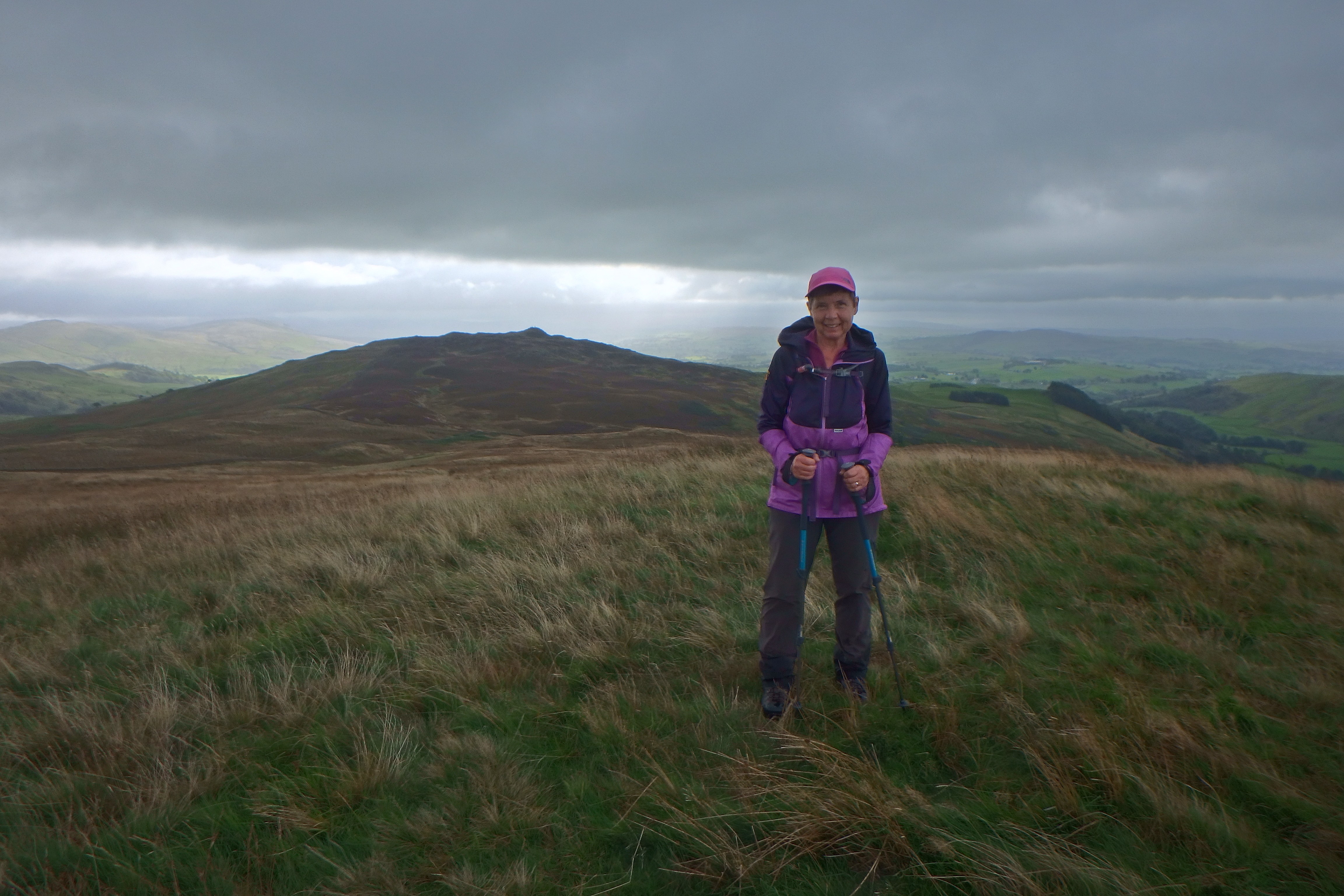 Looking back to Whiteside Pike 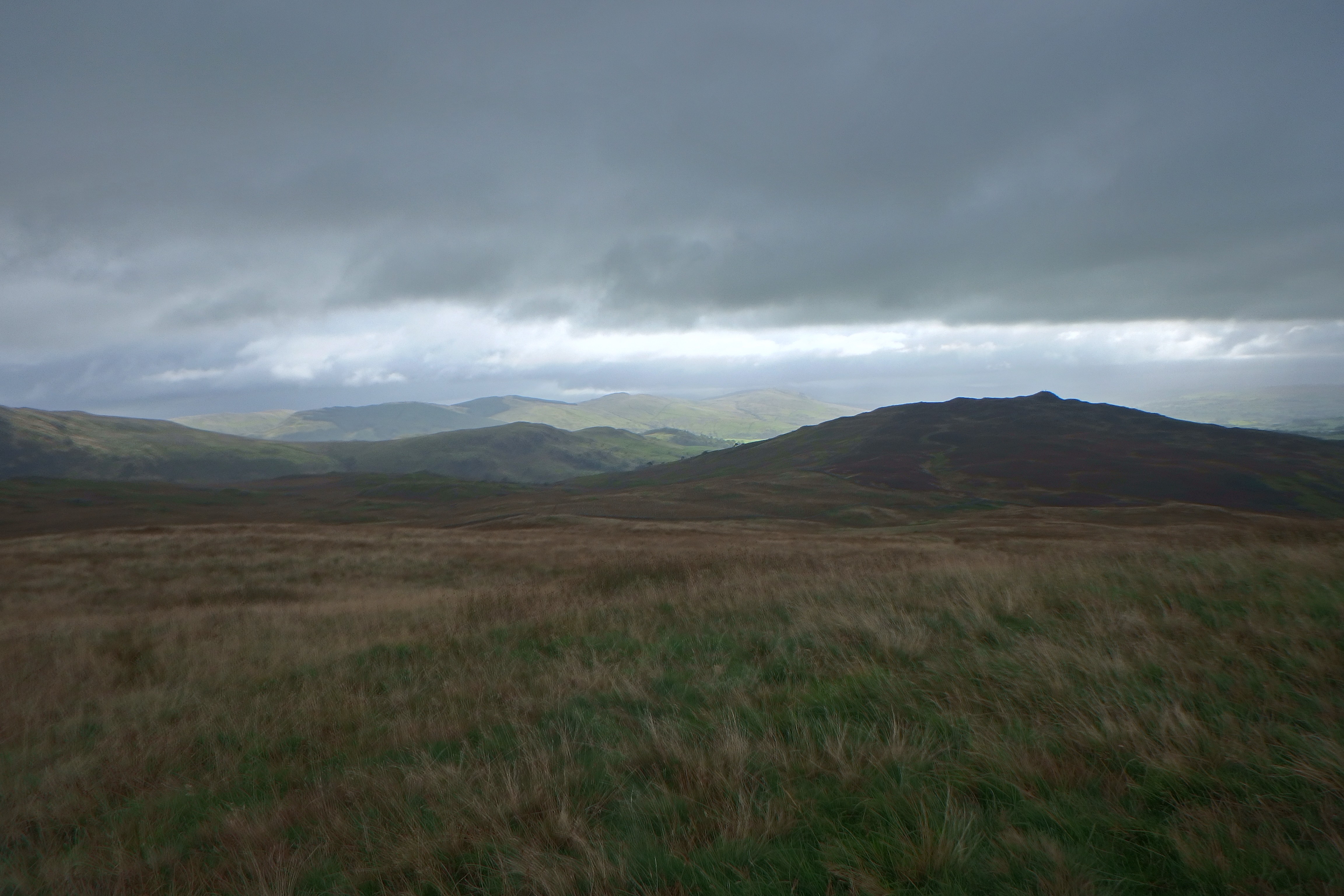 Capplebarrow was next, the path from Todd Fell leads to a ladder stile over the wall, once over it's a left turn then follow the fence all the way to the top. 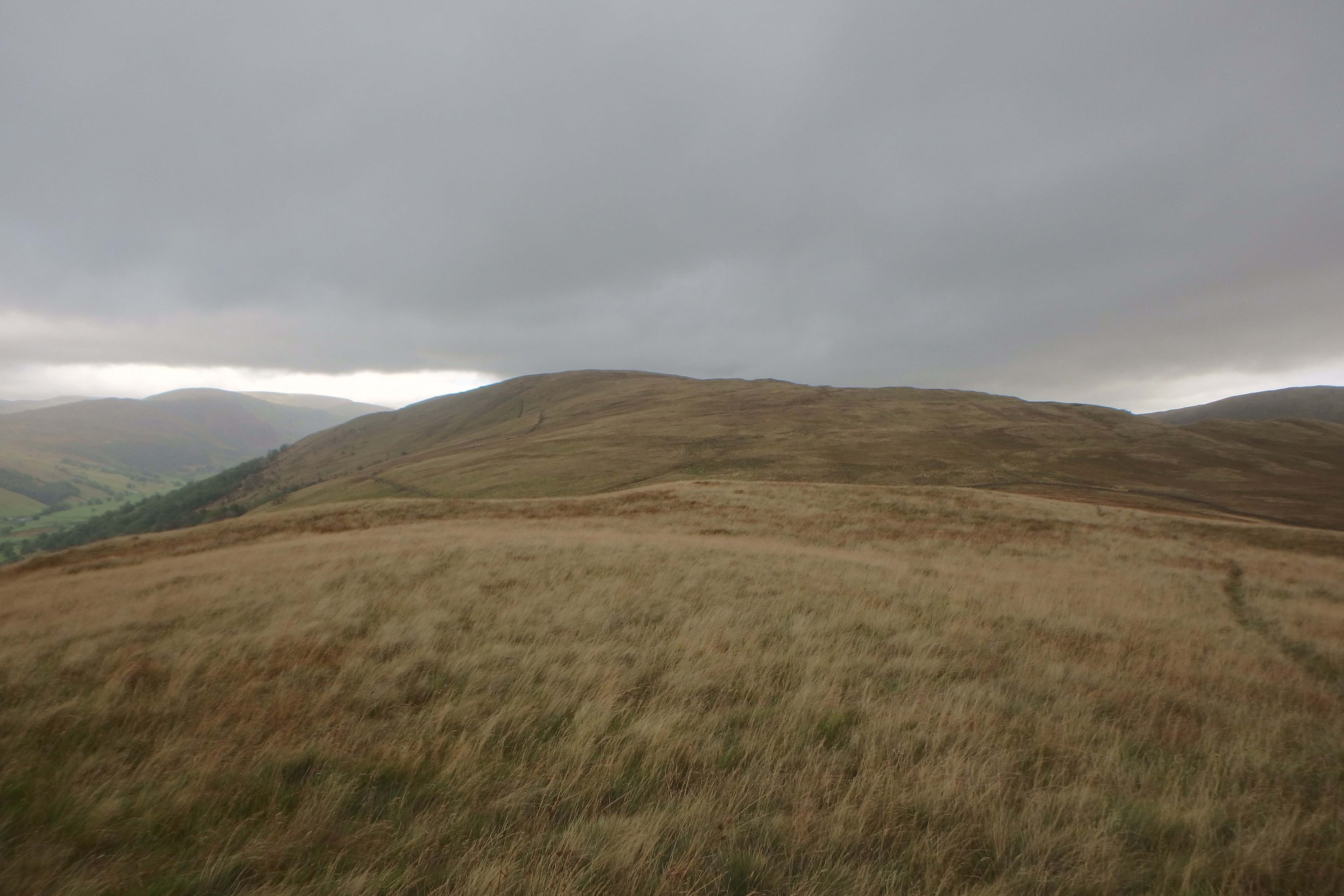 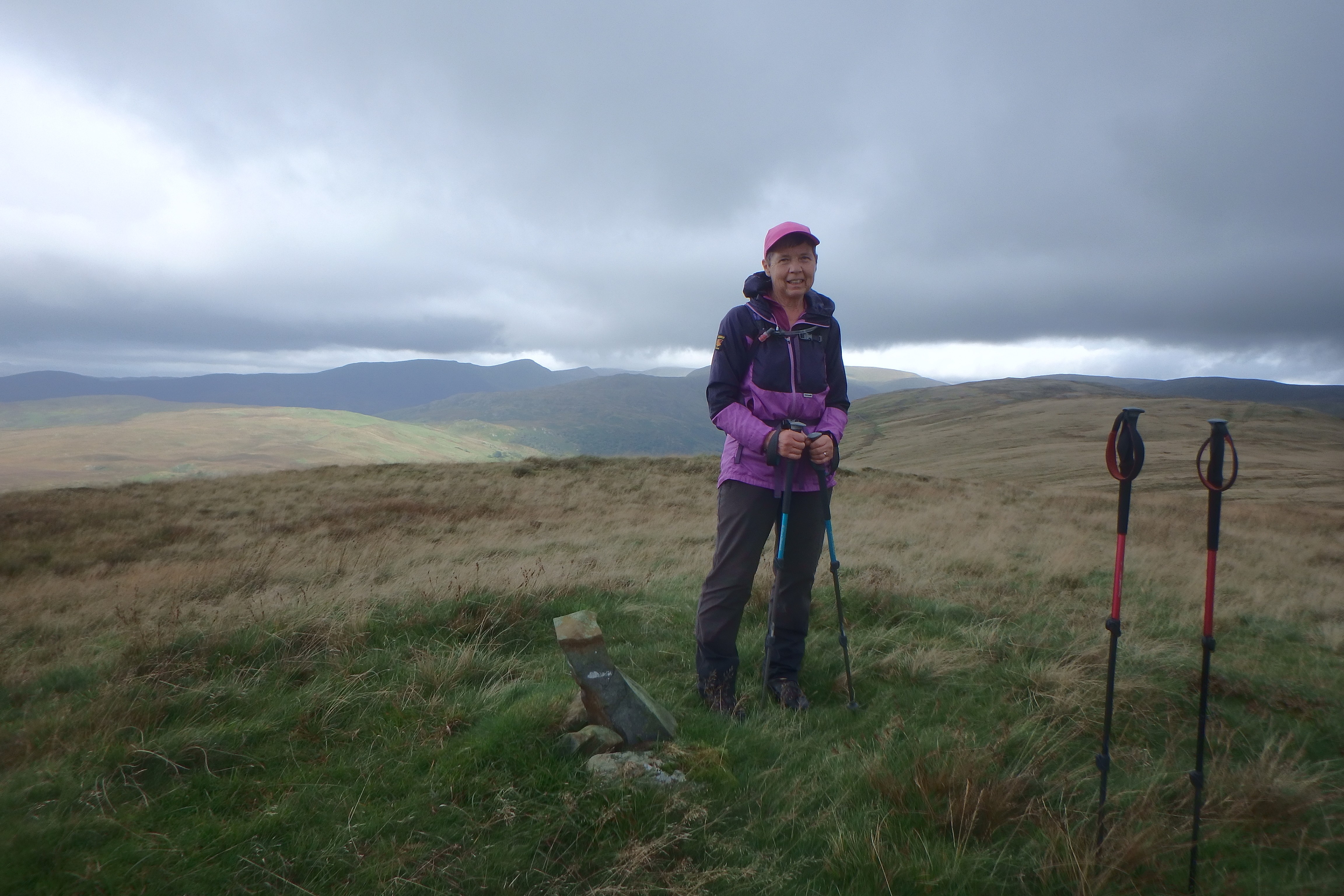 We could see Eastern Lakeland 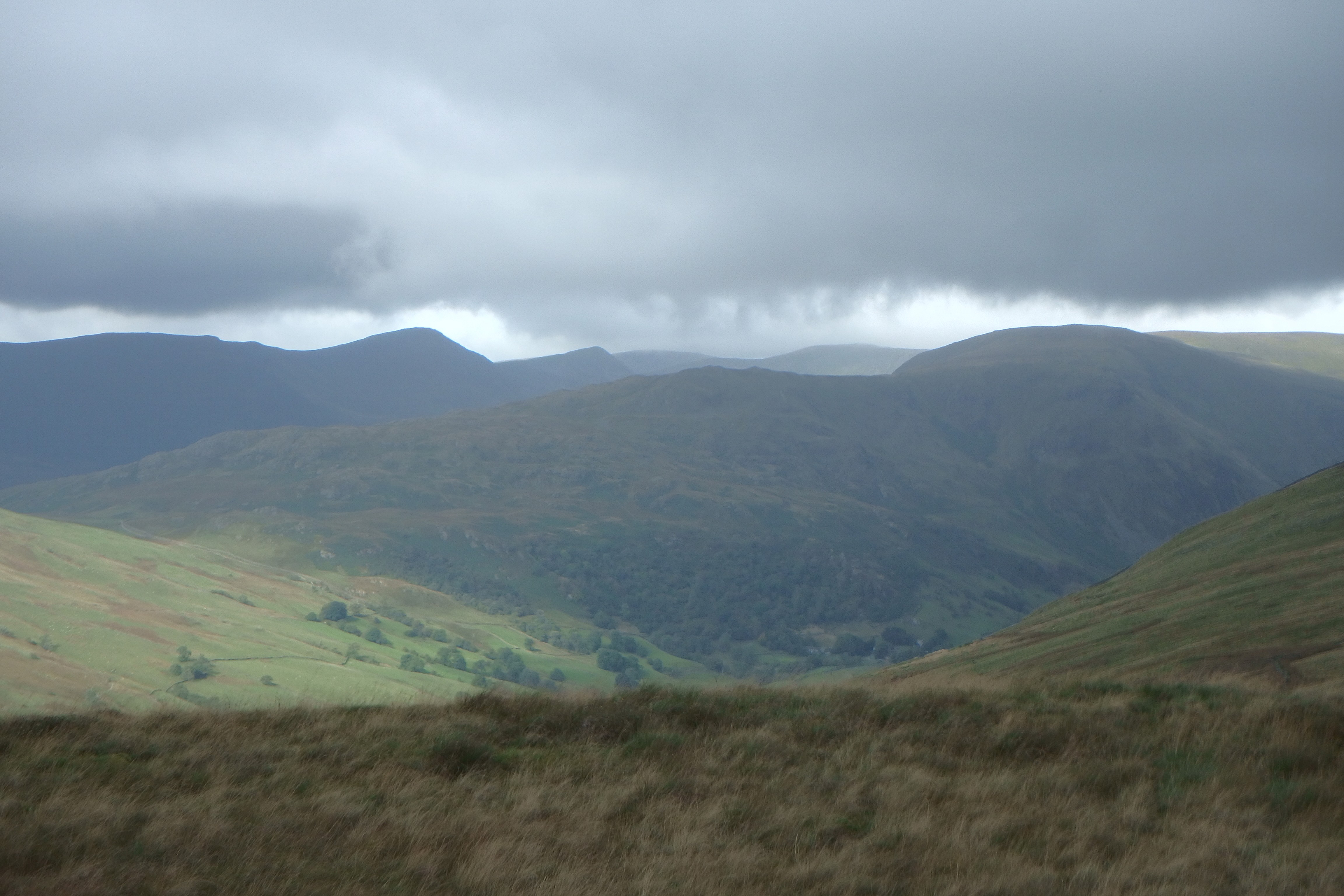 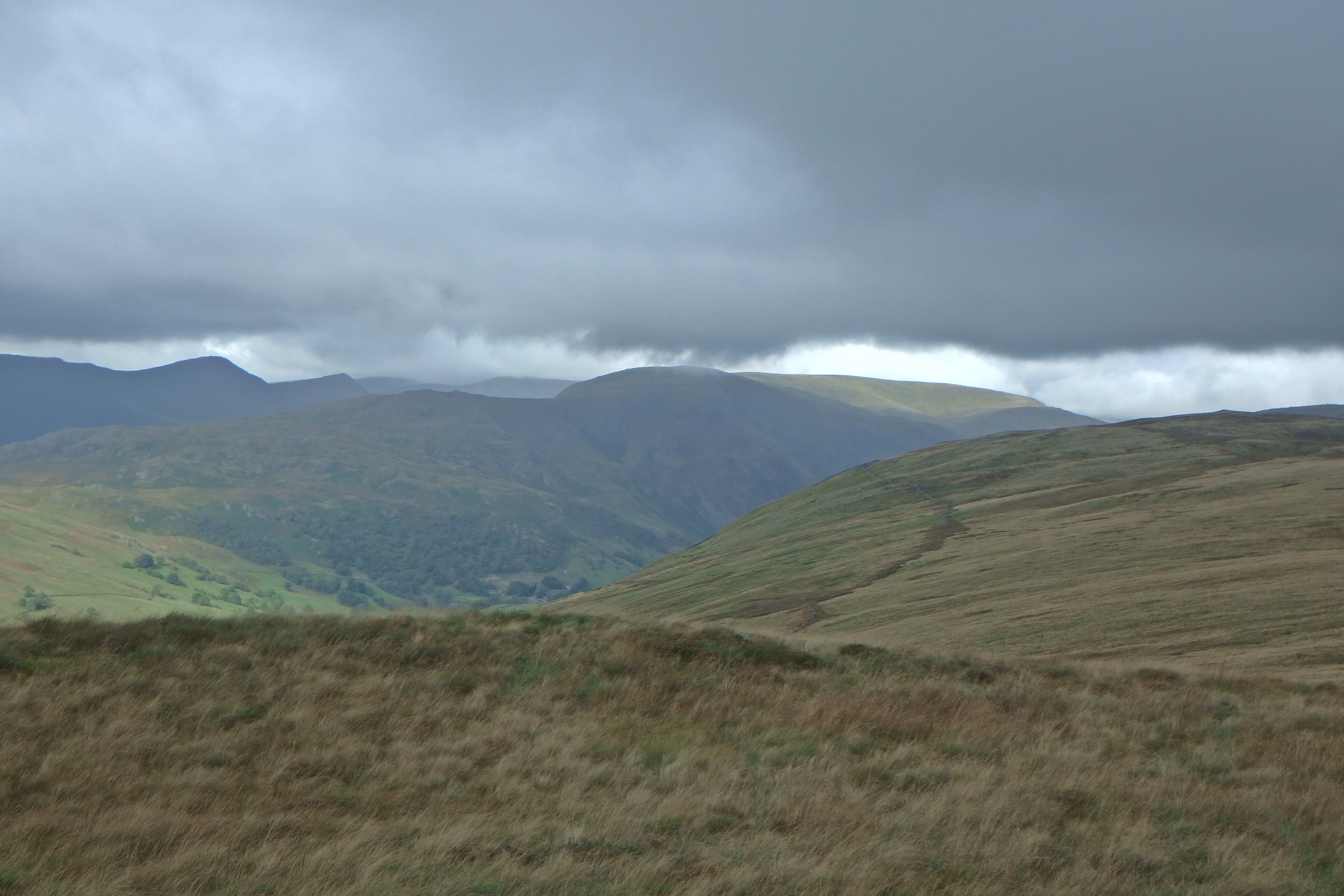 Back over the fence we headed for "nameless summit" No 1 which is above Swinklebank Crag, there's a large cairn on the top of this one 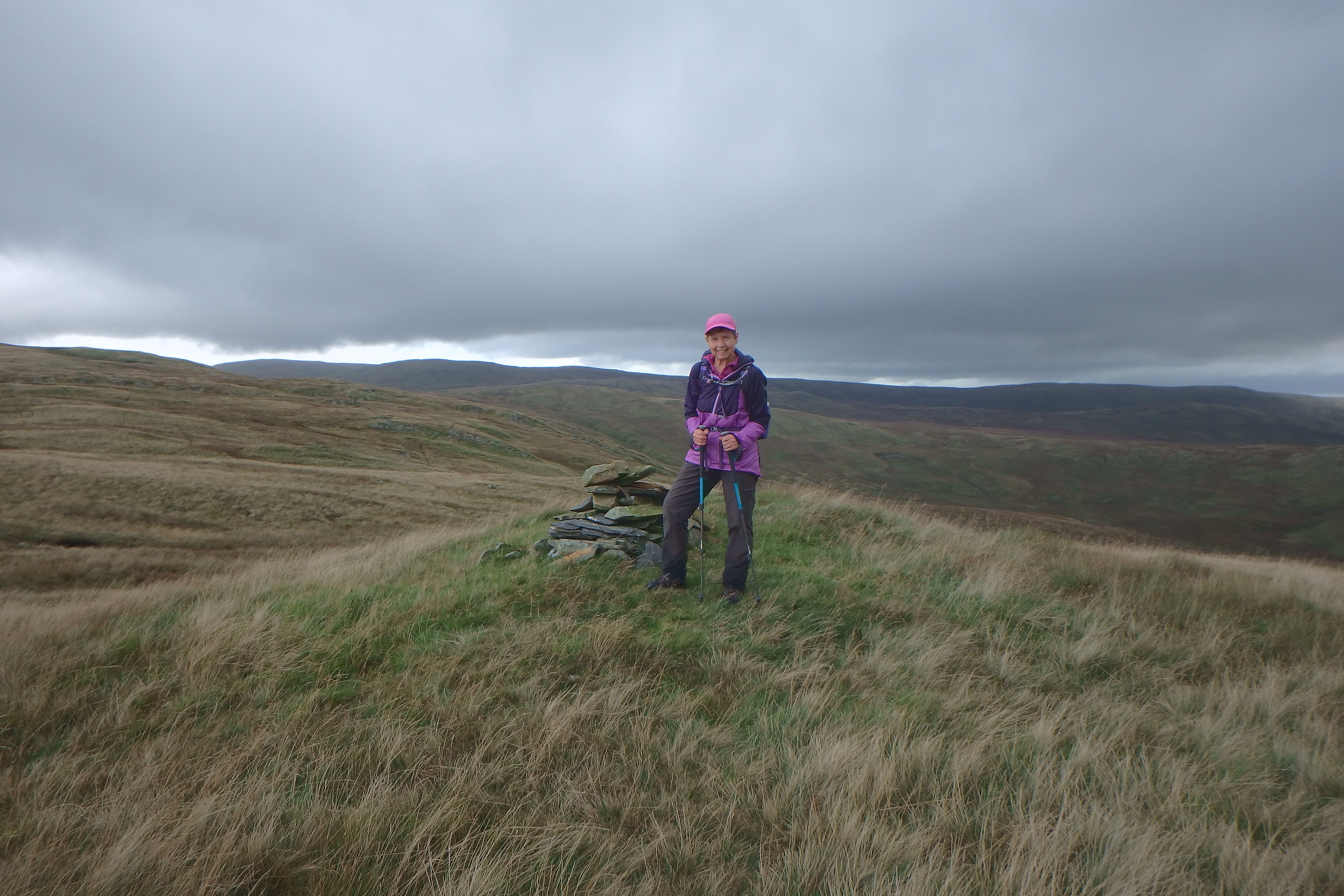 Then it was onto "nameless summit" No 2 which is above Ancrow Brow, sorry about the vague identification method but Mr Wainwright seems to like including nameless summits on this list I seem to remember other people noting this when I was researching the outliers, strange

We got as close as possible to the large cairn, there was no way over the fence really so we had to make do with this:( 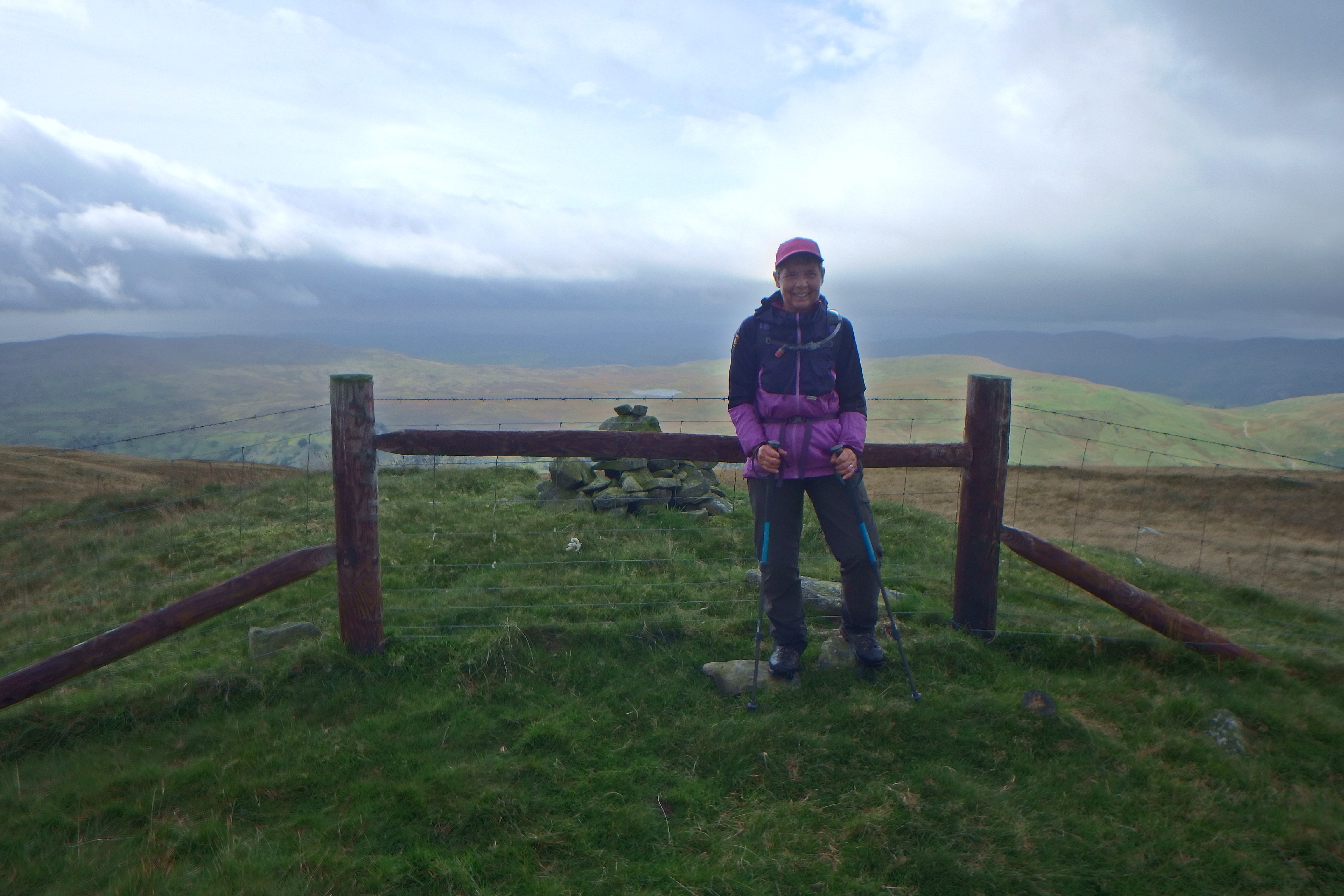 From this summit it's a long sweeping skirt around the head of Bannisdale where you get a good view into Bannisdale the first we got since setting off, we had to keep a keen eye out for the quad track leading to Long Crag, we found it without much trouble but if you're deep in conversation with your mates at this point you could go sailing past the turn without knowing it, especially in the clag

We arrived on Long Crag 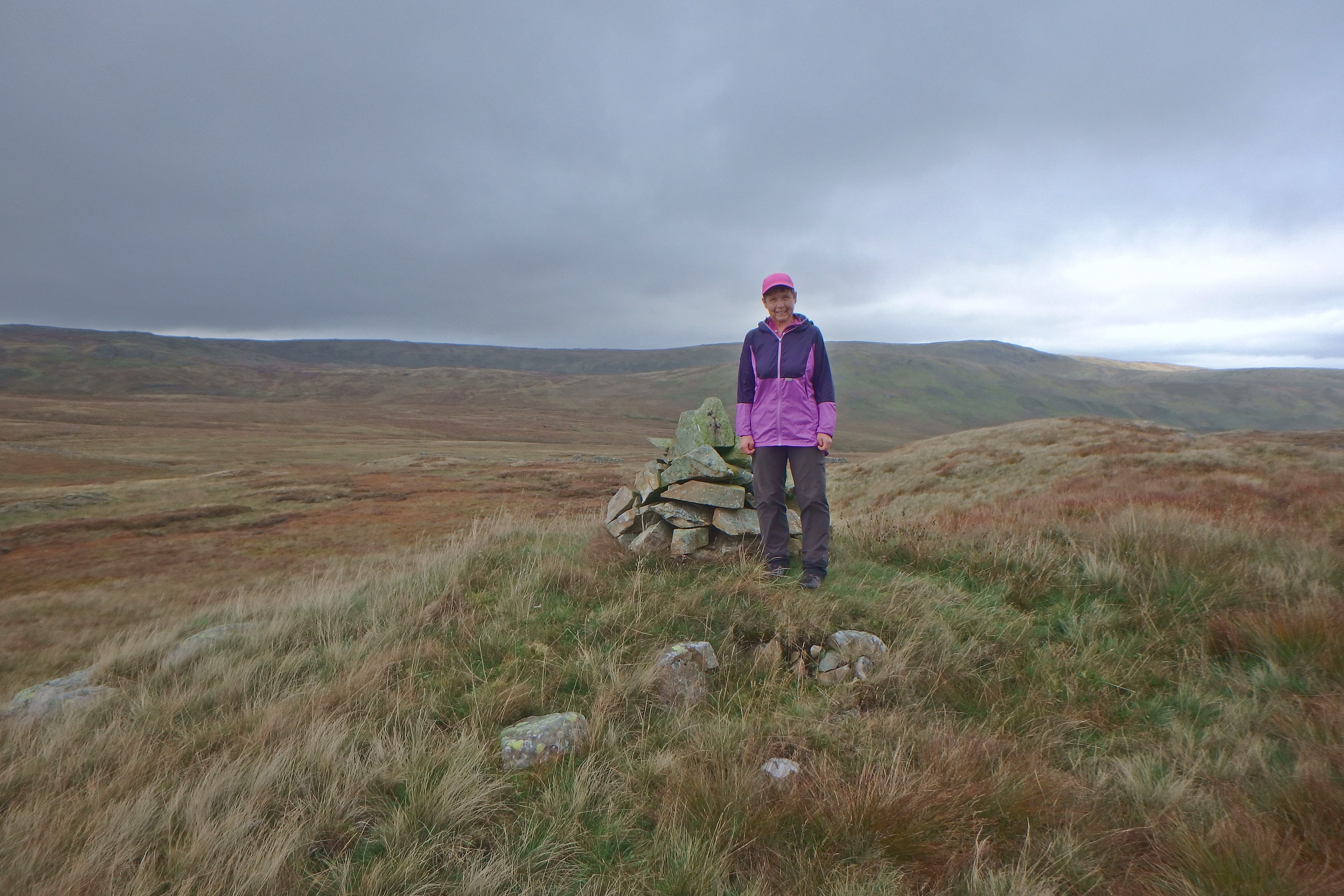 and decided to have our lunch next to the cairn, although it was mild it was a bit breezy on the top, the weather had been ok up to this point, overcast and a bit dull but we could see the cloud starting to shroud the higher tops in the Lakes, there was no real threat of rain so we took our time looking at the views. 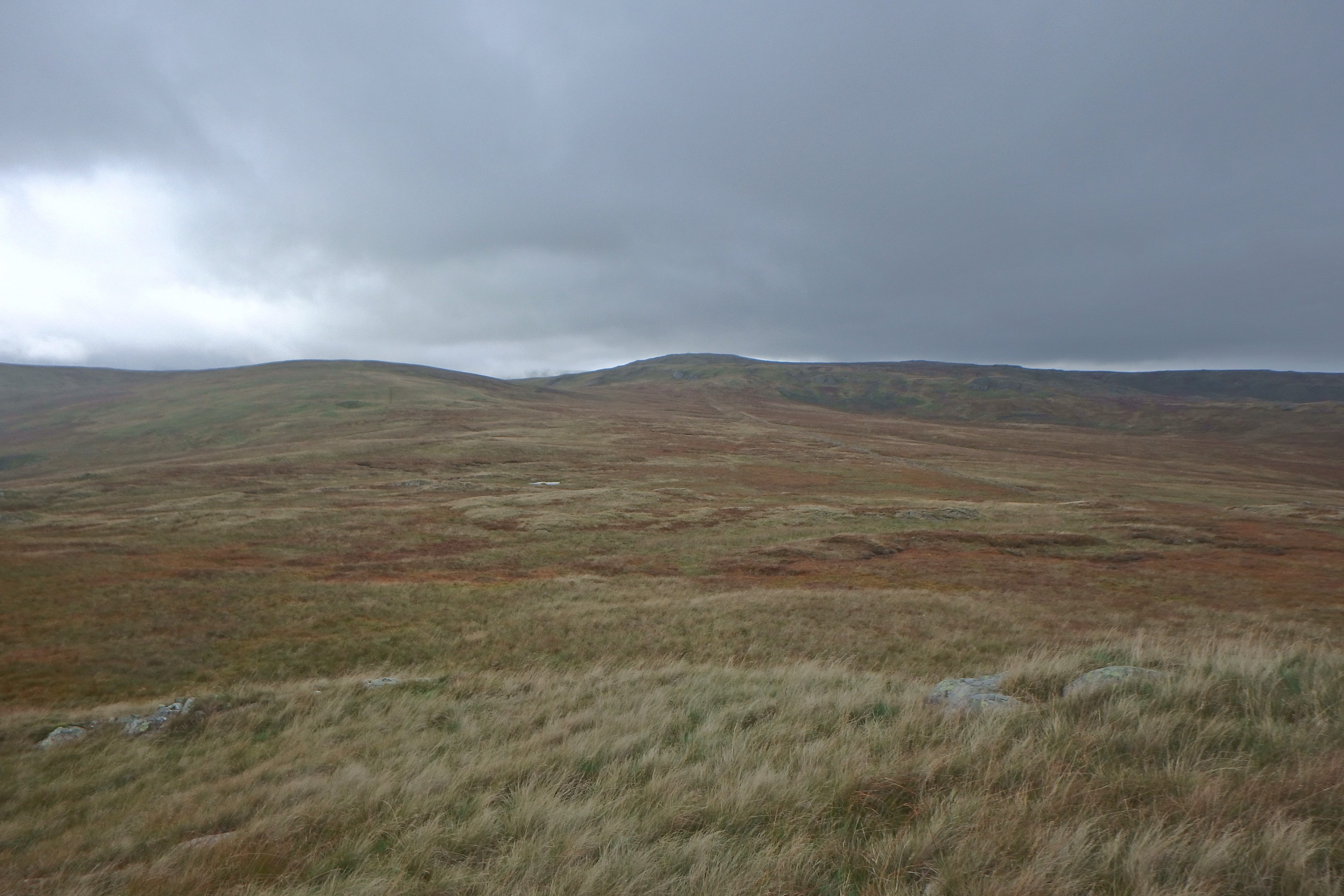 All of the Crookdale Fells could be seen, they looked well defined from here. There was a group of walkers on Capplebarrow, we could hear their voices on the wind it sounded quite eerie.

We set off for White Howe, we could see the trig point from Long Crag which was just as well because we lost the path and ended up following a wall, this was ok until I realised we'd miss the summit if not careful, a quick look at the map put us right and we started to head southerly uphill and soon saw the trig, what puzzled us was how on earth did we lose the path? it's obvious when you're on it

We arrived at the trig 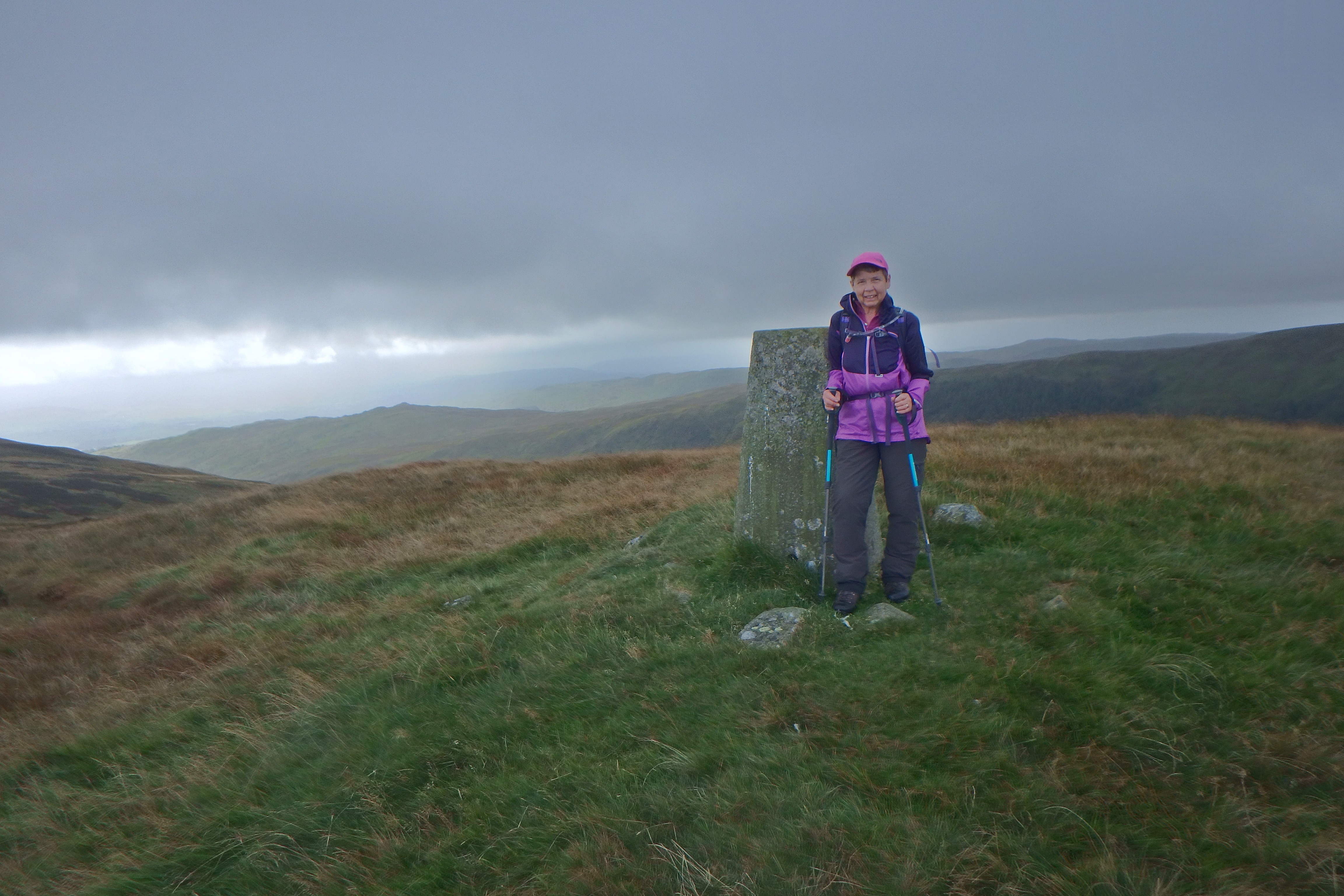 From White Howe the path leads to a stile in the fence then onto "nameless summit" No 3 which is above The Forest
We had another break looking over to Whiteside Pike and onto our last fell, Lamb Pasture. 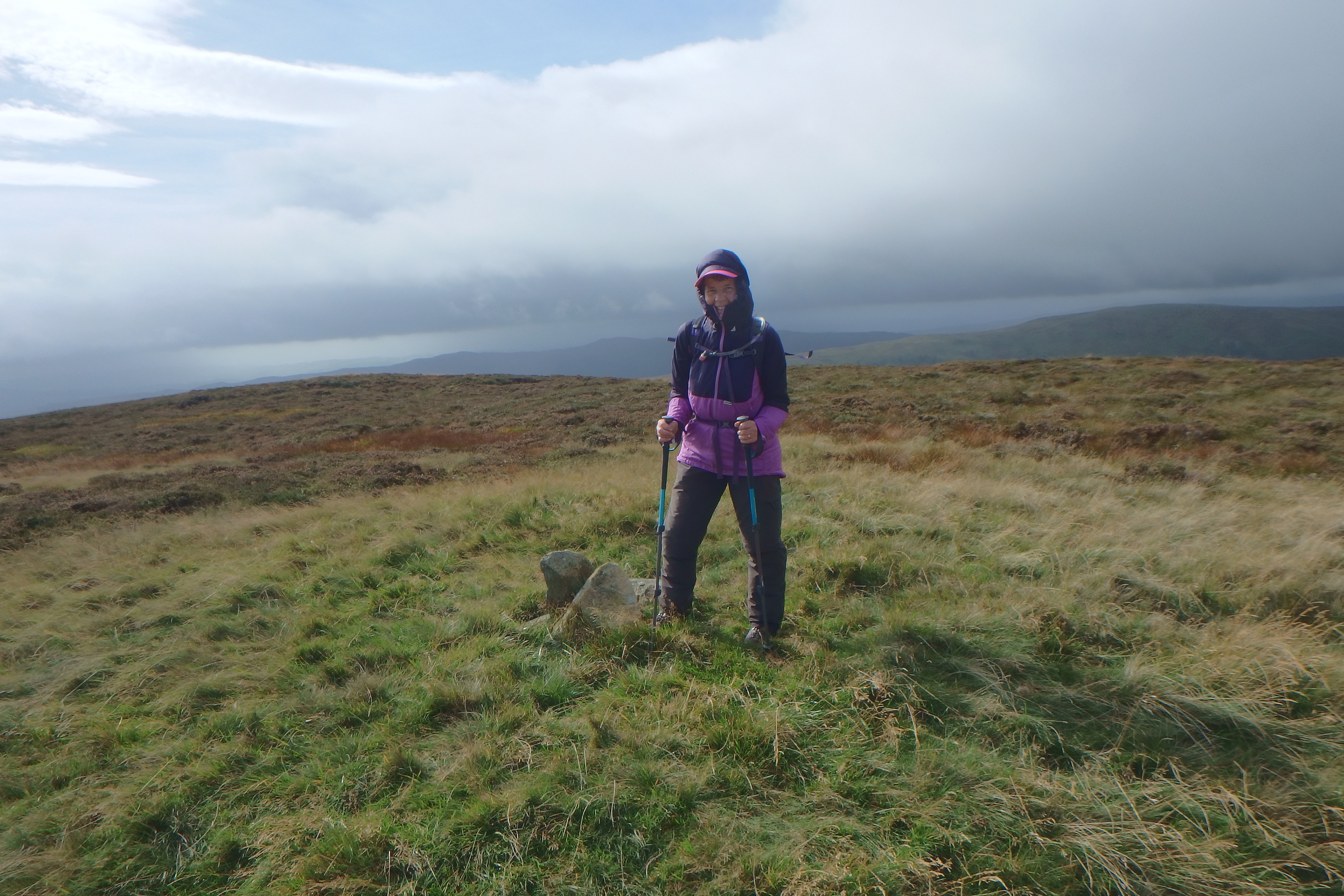 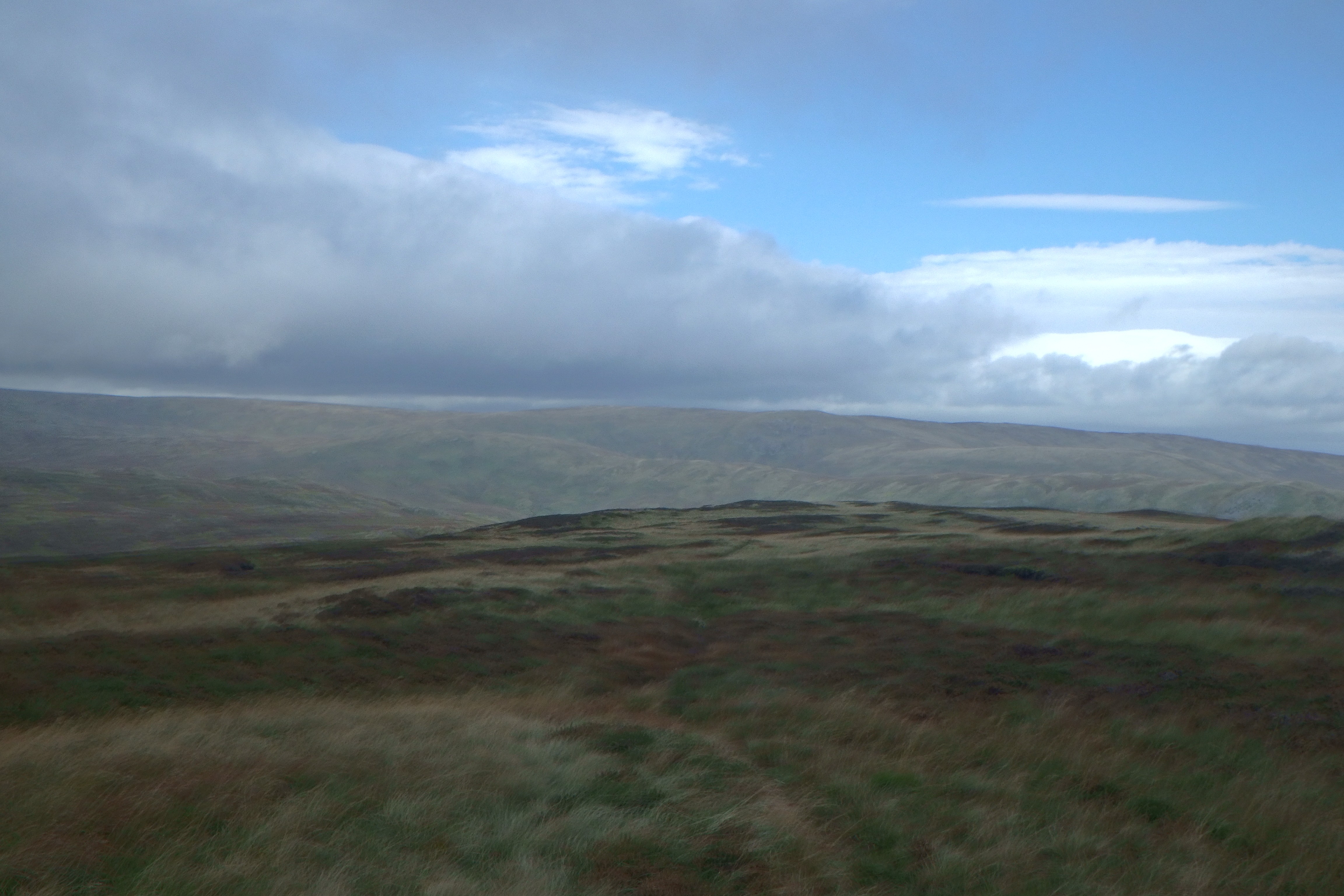 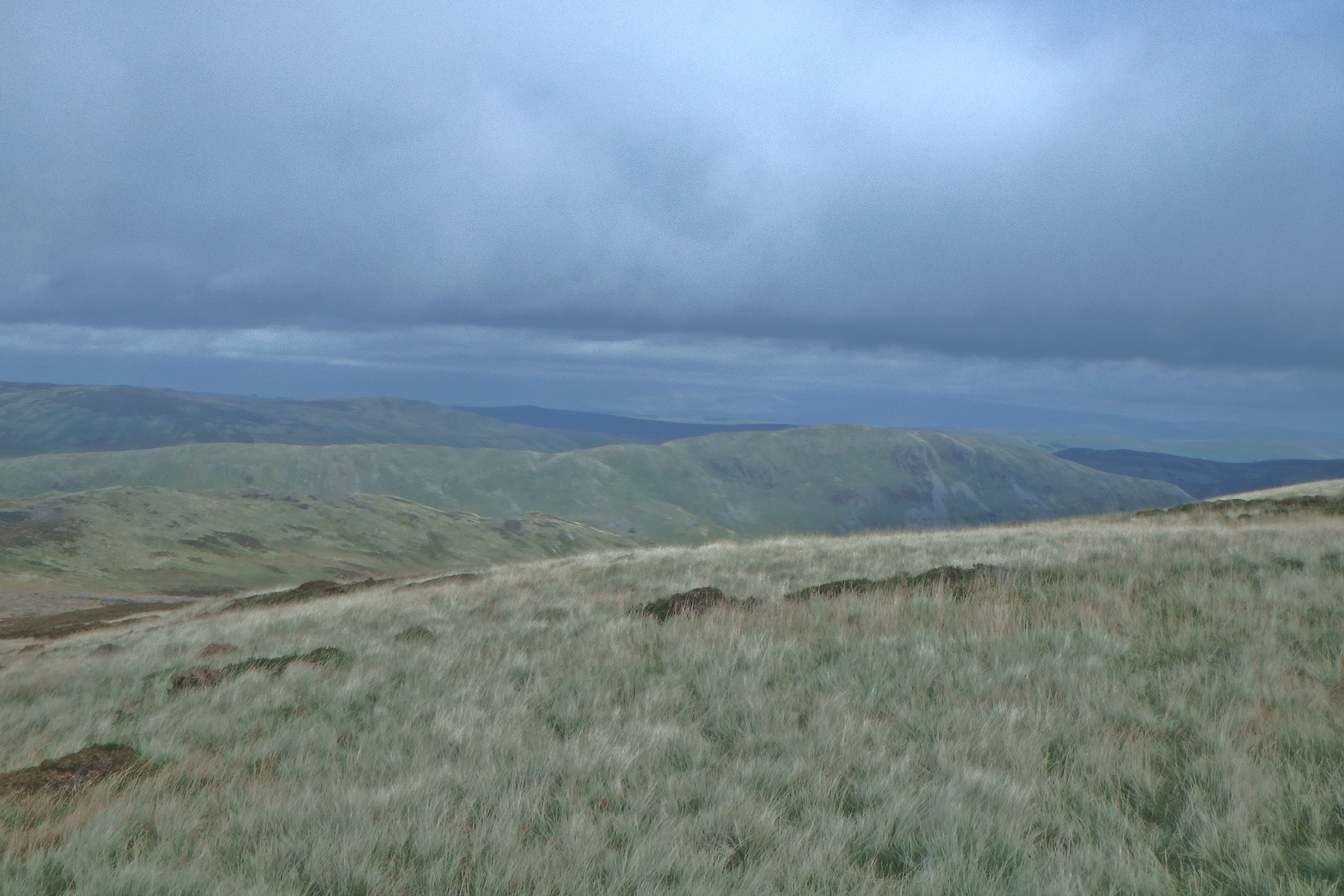 The descent from "The Forest" was quite steep in places, out of character from the rest of the round, on the way down we could see a gate in the fence so headed for that.

The gate was welcome, but we were on the wrong side of another fence for the summit of Lamb Pasture, we carried on up the path hoping for a stile, there wasn't one but the fence had been modified slightly so we could step over and get to the top 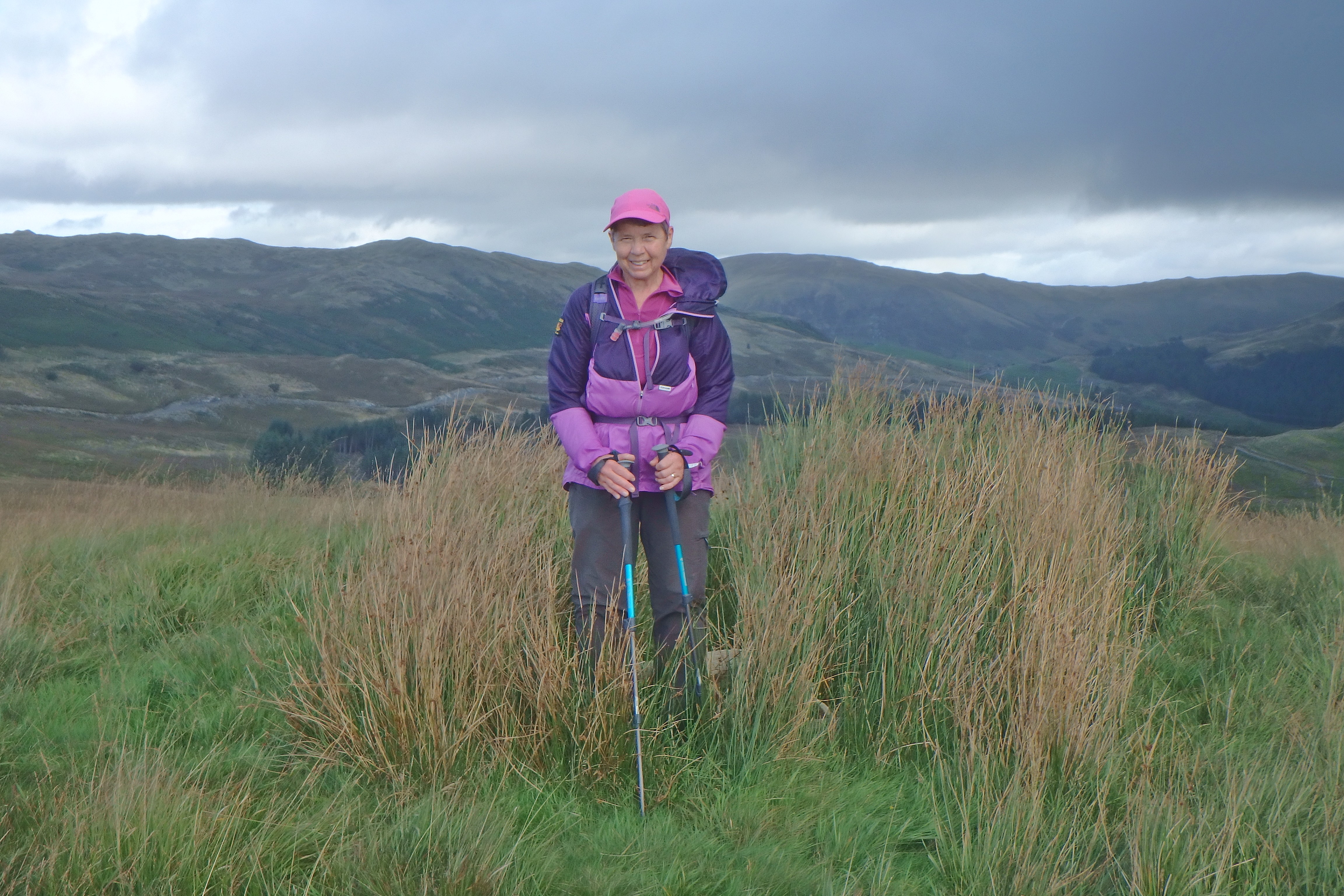 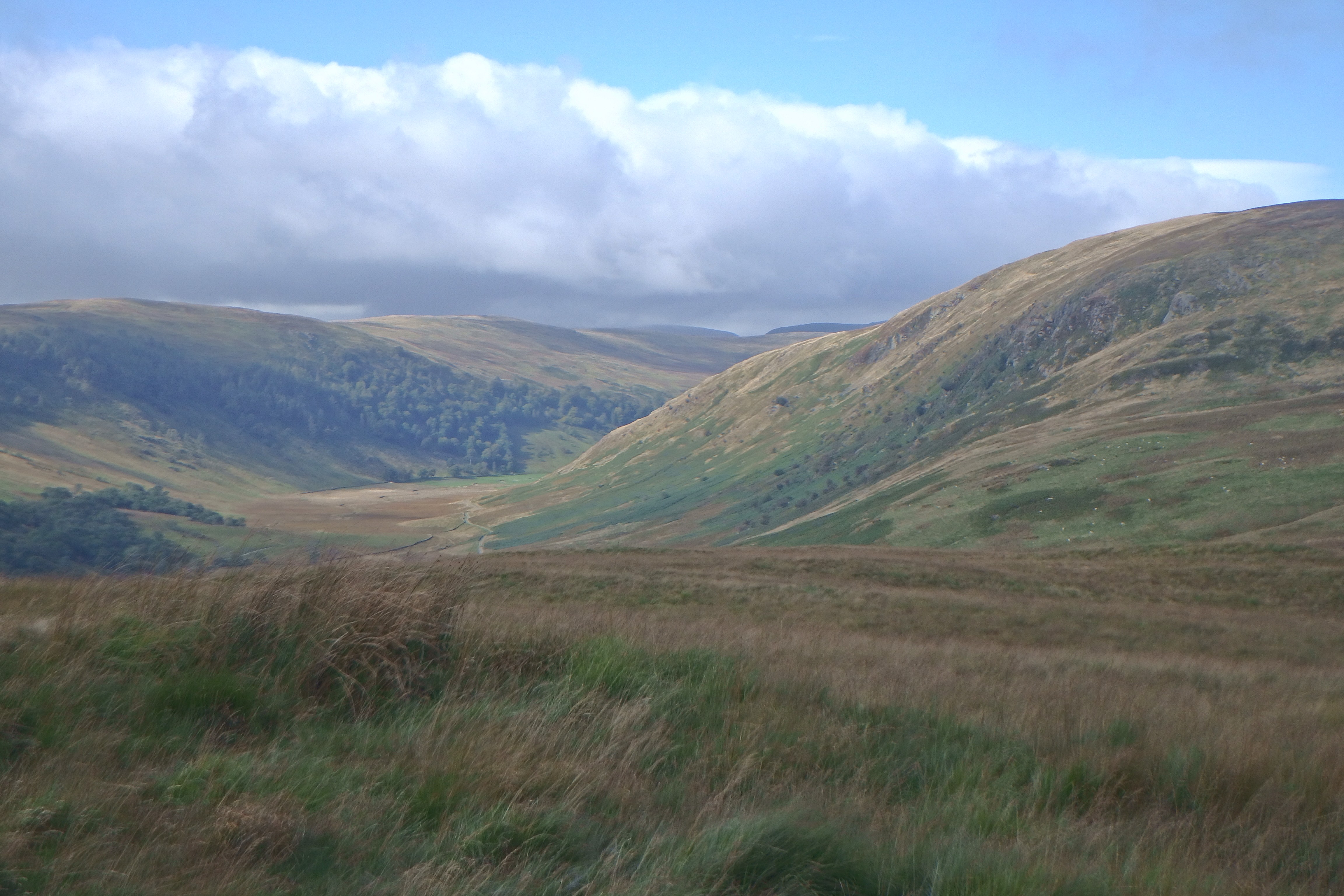 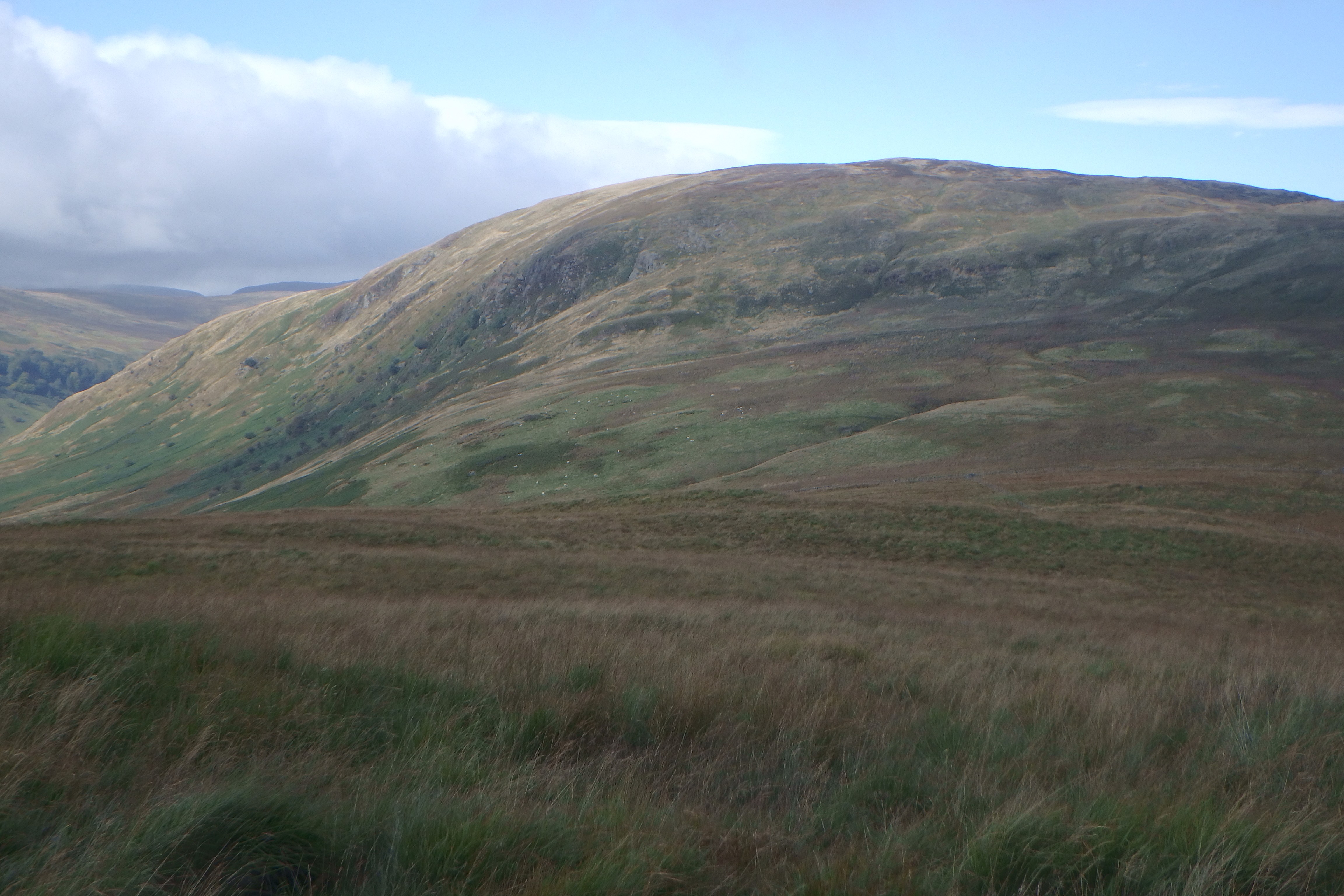 From the top we could see a gate in the fence below us just near a sheep pen so set off for that, once through the gate we followed a quad track down to a better defined one which is marked on the map, this in turn took us the The Old Shap Road which led us back on to the little lane near to where the car was parked so it was a 5 minute walk to the car which suited us nicely

Another enjoyable day out in the Shap Fells, I'm already planning our next trip

Another good report and walk martin.h

and fortunately the weather held up for you

Your route is more or less identical to ours that we did a few years ago only we set off from Dryhowe Bridge where there's a small parking area and climbed the east slope to Todd Fell summit from there. If you haven't walked 'em the Whinash and Whinfell ridges are two great walks also

and fortunately the weather held up for you

Your route is more or less identical to ours that we did a few years ago only we set off from Dryhowe Bridge where there's a small parking area and climbed the east slope to Todd Fell summit from there. If you haven't walked 'em the Whinash and Whinfell ridges are two great walks also

Thank you TM, when we got to the top of Whiteside Pike I looked at the planned route and thought "it's a long walk round" once we got going though, it was surprising how quickly we travelled from one top to the next

so we're looking at winter walks in the outliers. Re the Whinash and Whinfell ridges we did them both in the day March 2020, that's a good day out, I'd recommend them to anyone who likes solitude and good going underfoot, we started from the viewpoint on the A685 near Tebay and went up Grayrigg direct