Calf Top is a fell I've wanted to do ever since being on Crag Hill a few years ago, not knowing which hill it was at the time I did a bit of research and found the answer probably easier than usual because it was around the time it had been promoted to mountain status therefore a Hewitt which would be a new one for me, especially as it was fairly close to home, I just typed in hills above Bull Pot Farm into Google and there it was

We kept promising ourselves a trip up there but never got round to a visit for one reason or another, the week before Christmas would be ideal as we both had days off together midweek and hopefully it would be quieter, the forecast wasn't brilliant but there was a chance for some sunny intervals late morning on the 21st so it was decided, lets see
what Calf Top has to offer

My research suggested there was roadside parking in Barbon, not being a fan of parking in small villages I was happy to find there was a decent sized parking spot by Hodge Bridge which is only a short walk away from Barbon, ideal

so parking sorted, route sorted we were off for pastures new

My route was the usual ascent from Barbon, along the ridge to Calf top then a walk further along the ridge to a suitable point to leave it at around SD674869 (a stile in the wall) and a descent into Barbondale hitting the road at around SD683865, I decided to do this because I'd read there were access issues descending west from Calf Top around
Mill House, I didn't want to be confronted by angry land owners

The parking spot was empty when we arrived at Hodge Bridge which was surprising, the weather was a bit dull and there were hints of low cloud over the higher fells, it was dry though with rain not likely so we made ready and set off for Barbon.

on the way we looked at the memorial 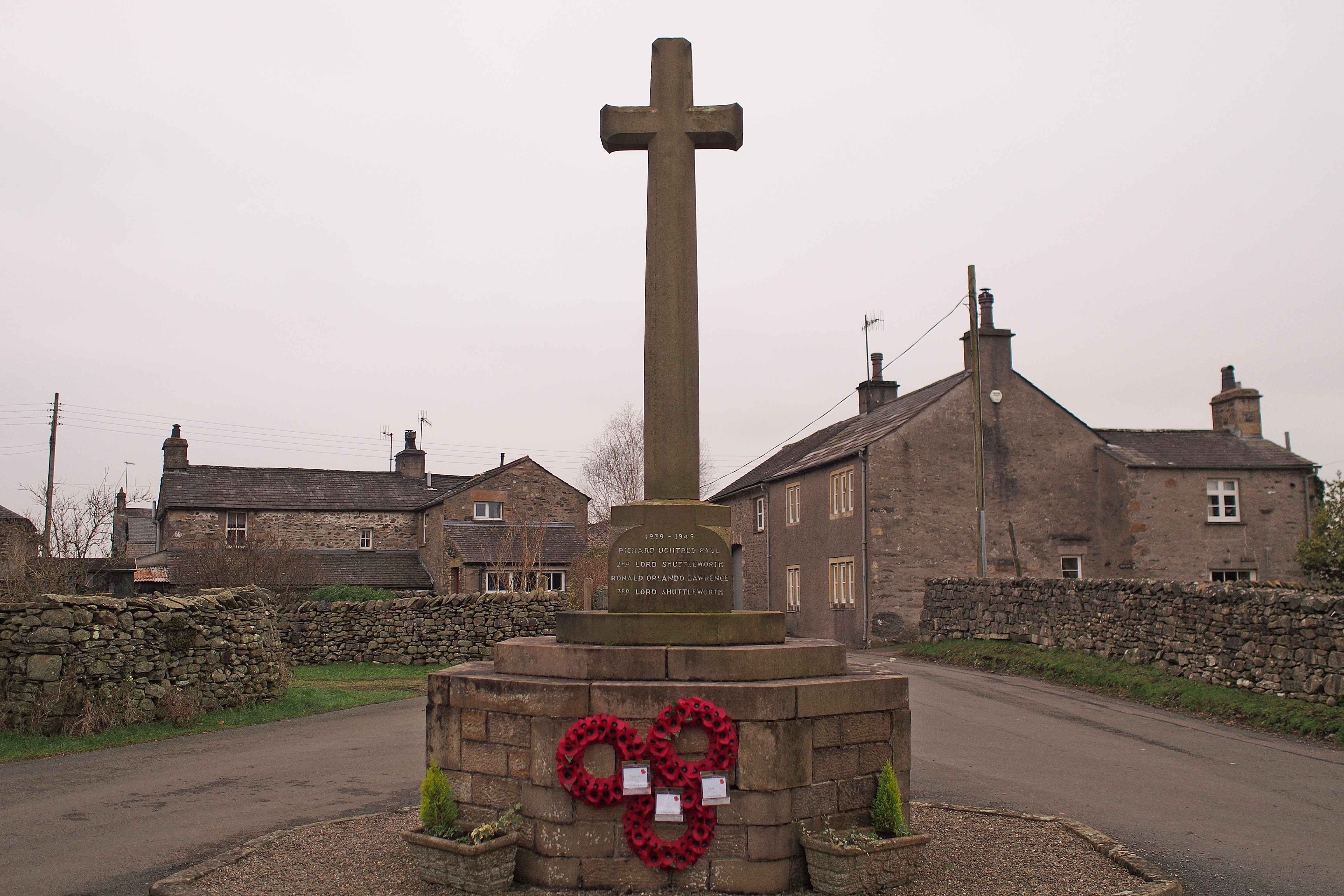 It's a nice little church built between 1892 and 1893 so not as old as it looks, there's been a place of worship on or near the present day church going back as far as 1610. 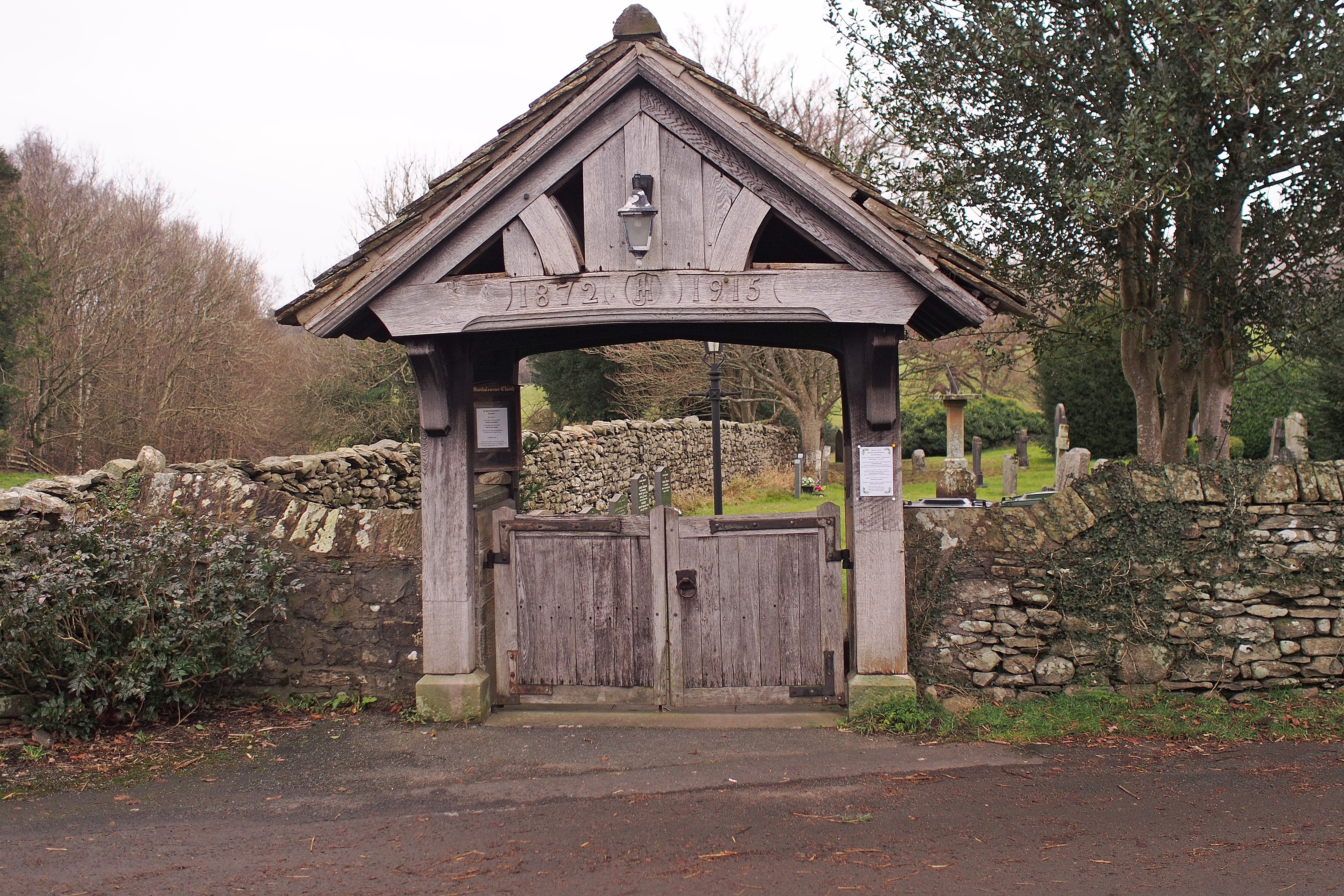 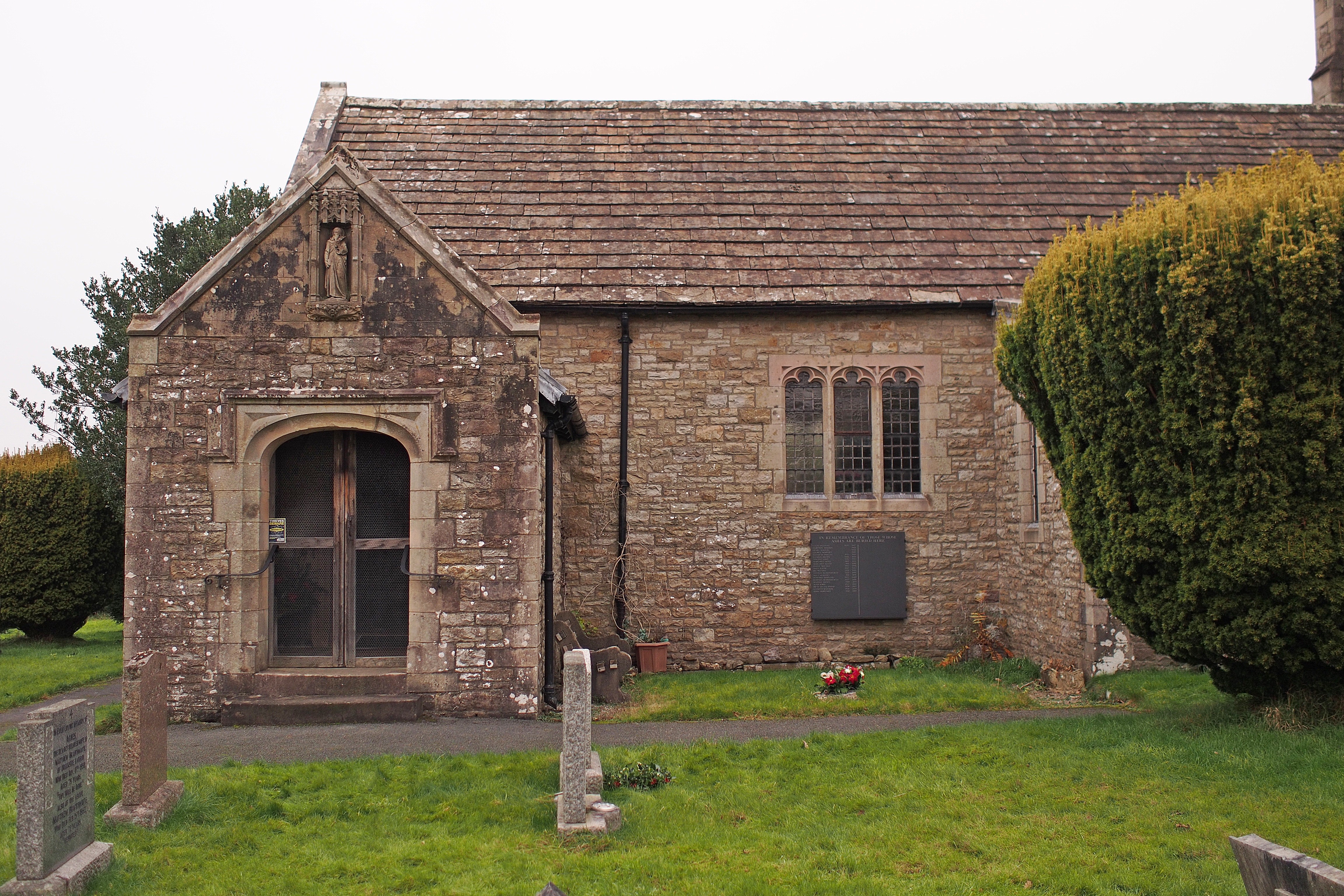 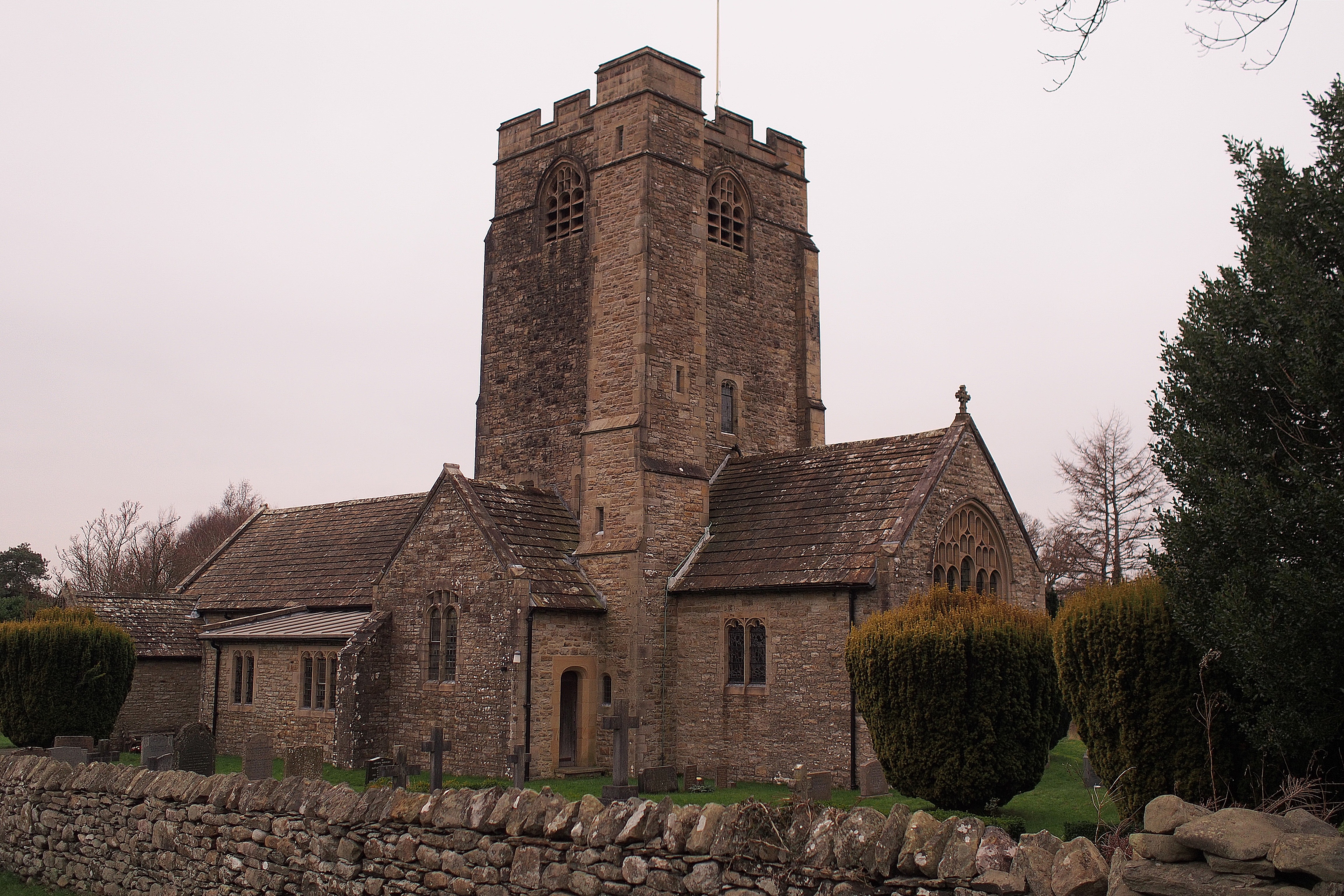 Turn left onto a metalled driveway immediately after the church signposted FP to Eskholme. 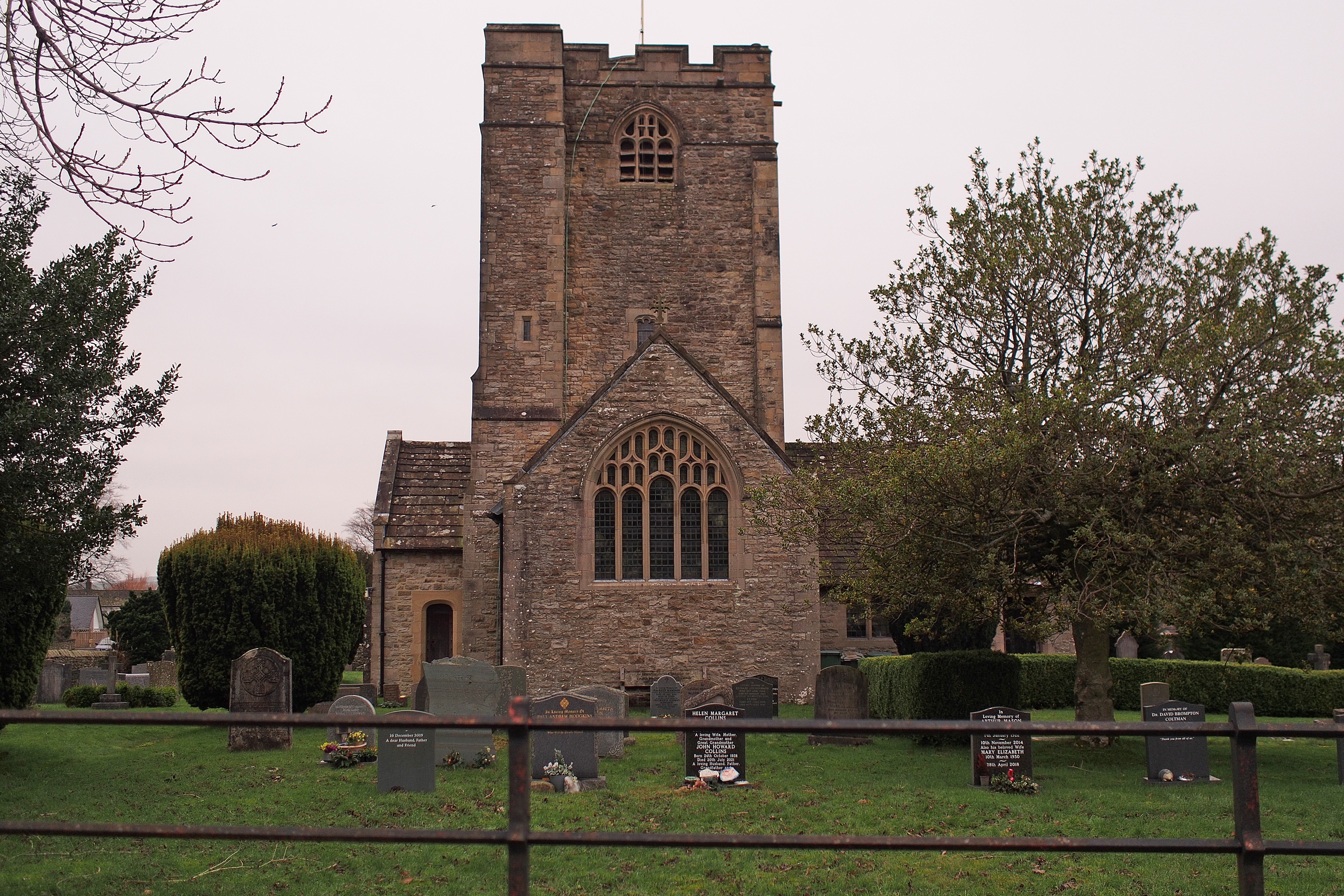 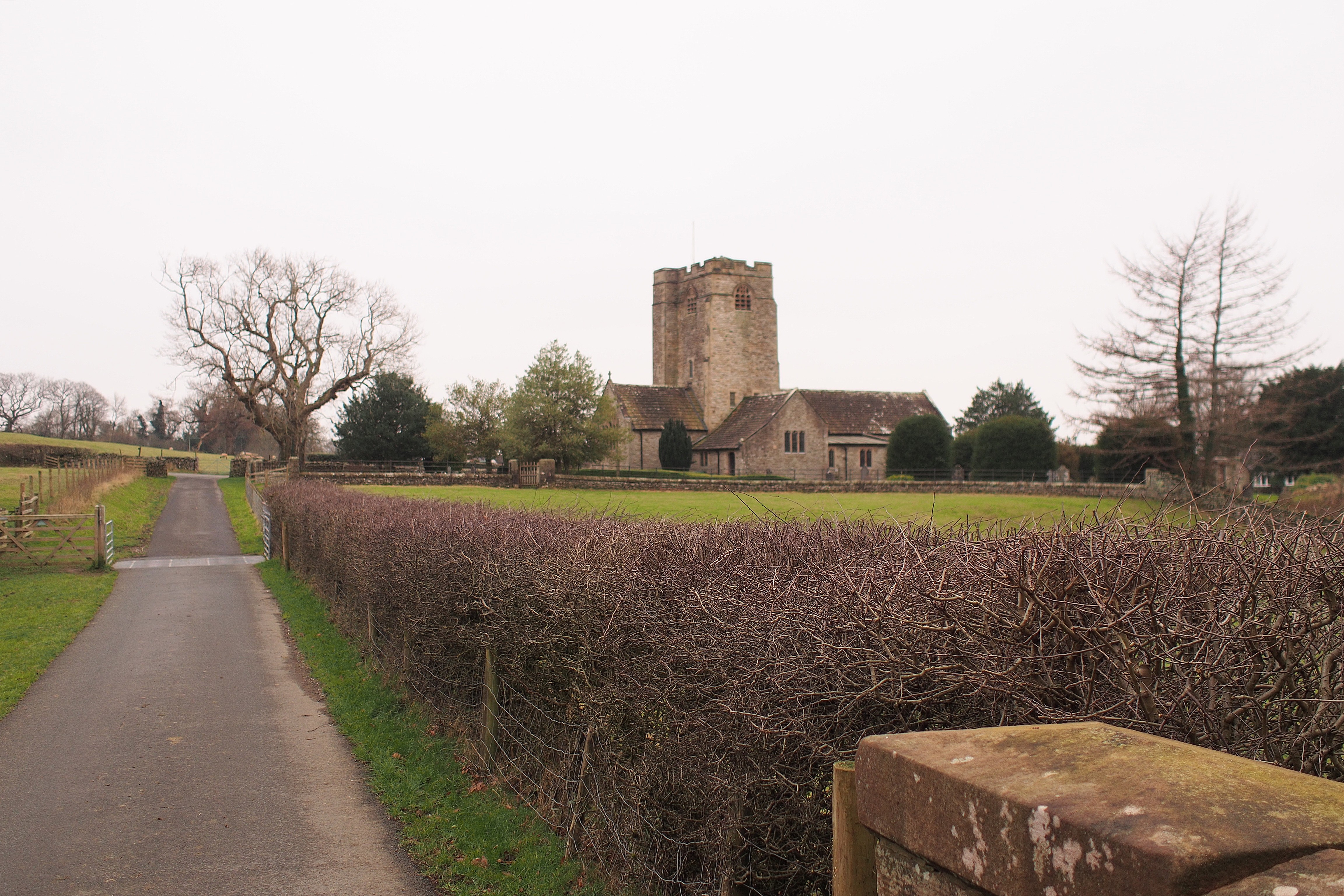 When you get to Eskholme turn right onto a path following an old wall, it's a bit vague, we missed it so had to backtrack

The initial climb up to Eskholm Pike is steep, we followed a quad track for most of this bit, there is another path to the right that we'd missed and only saw it when we were looking down to Barbon from the cairn

either way it's quite a steep pull up, certainly gets the old ticker pumping 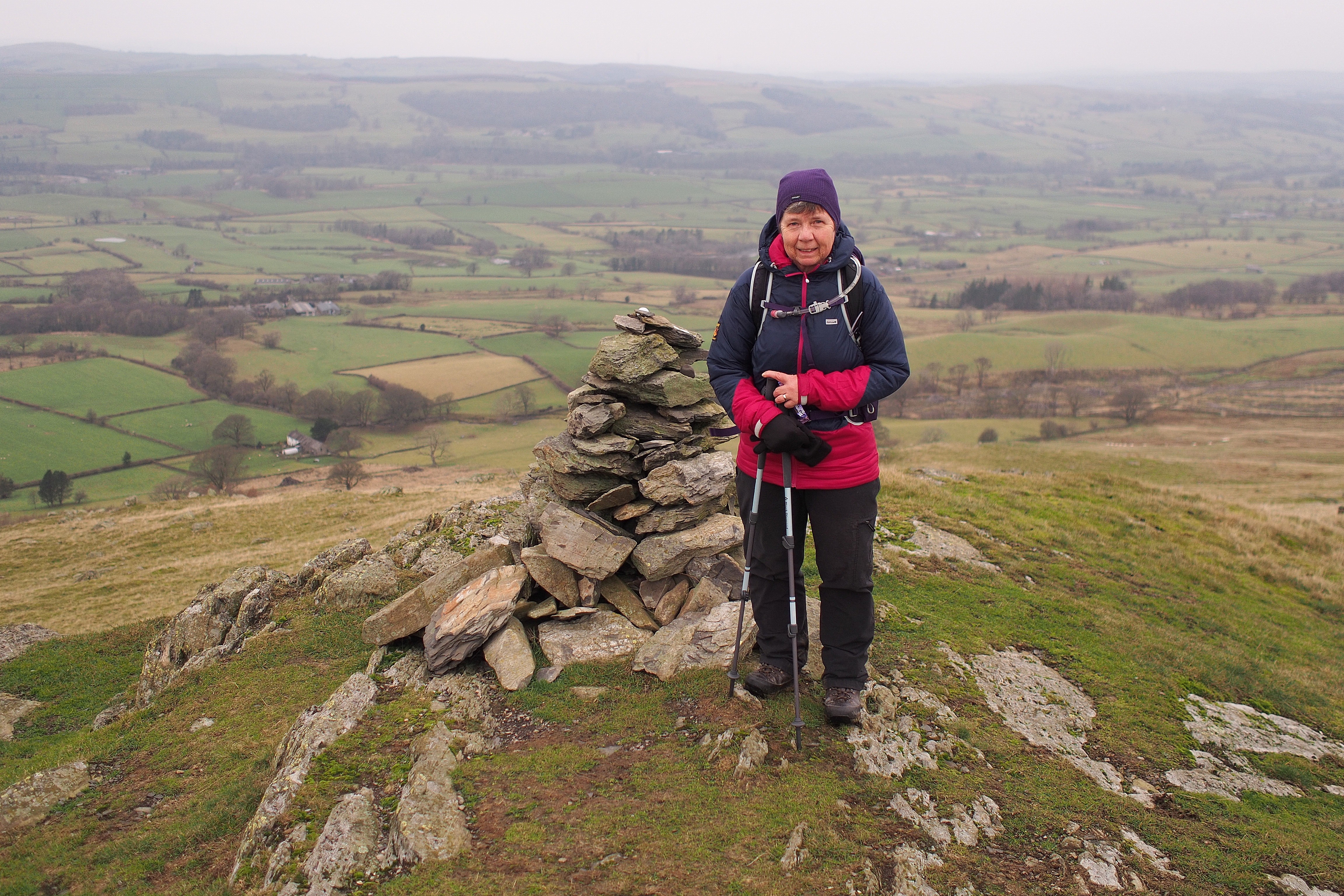 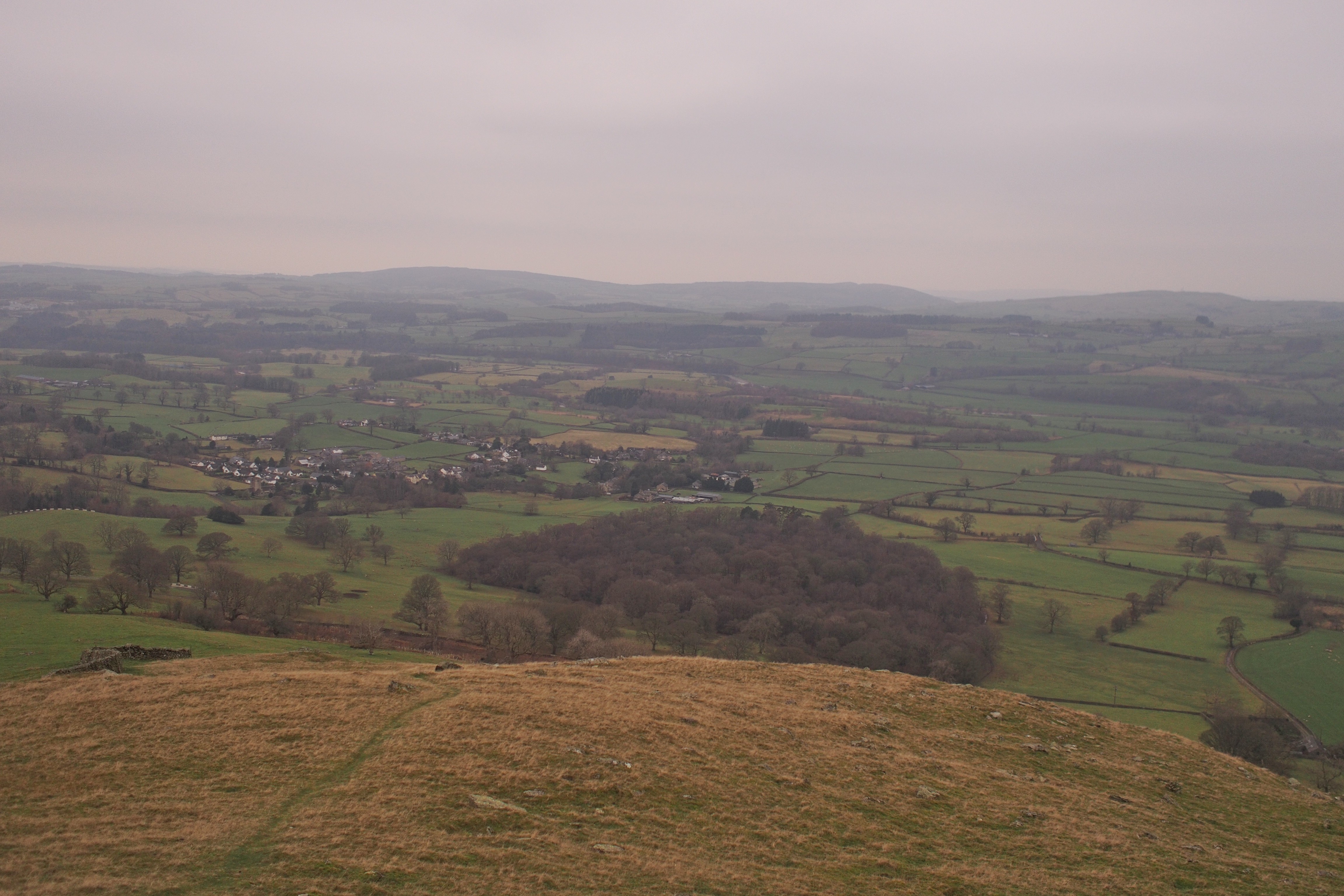 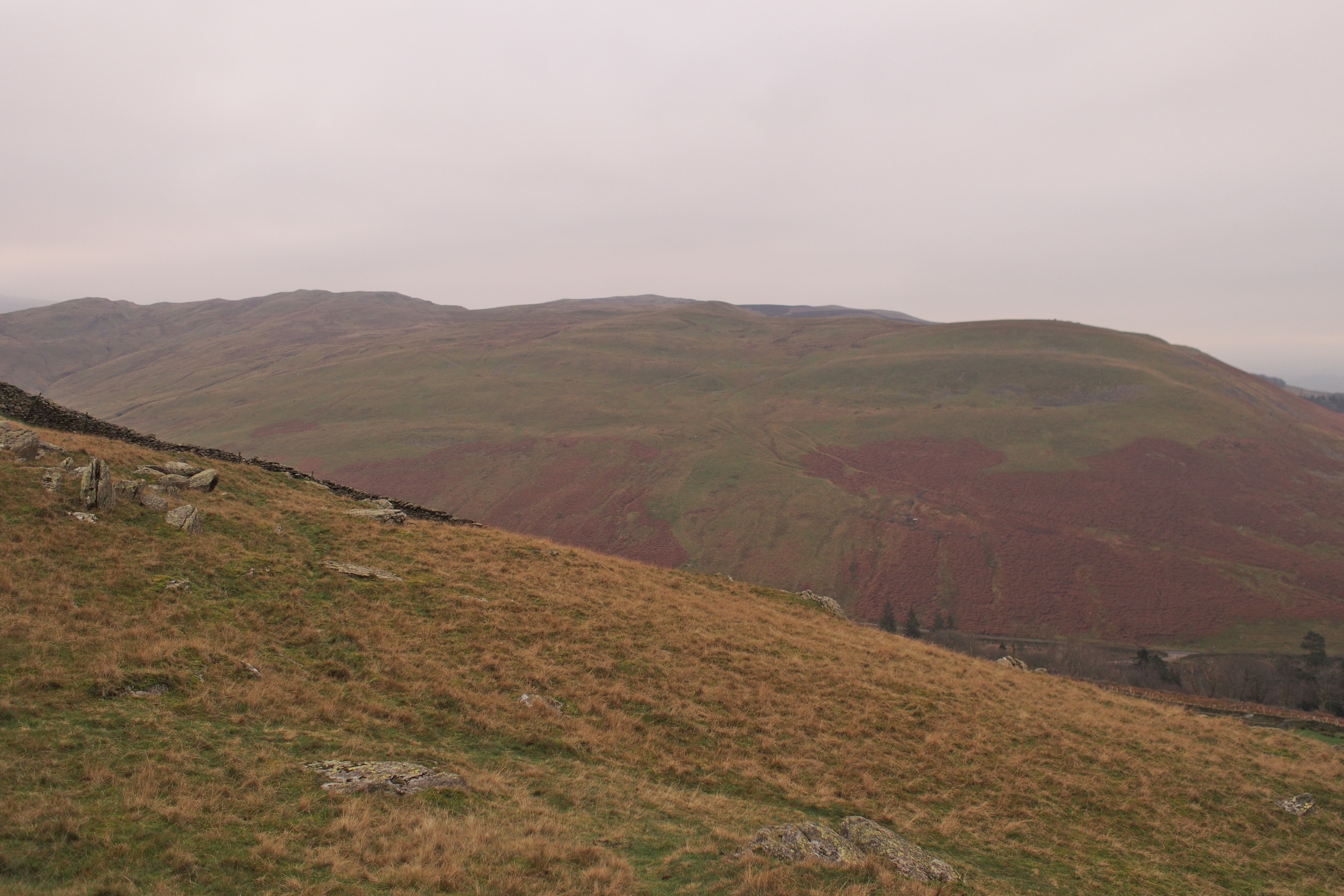 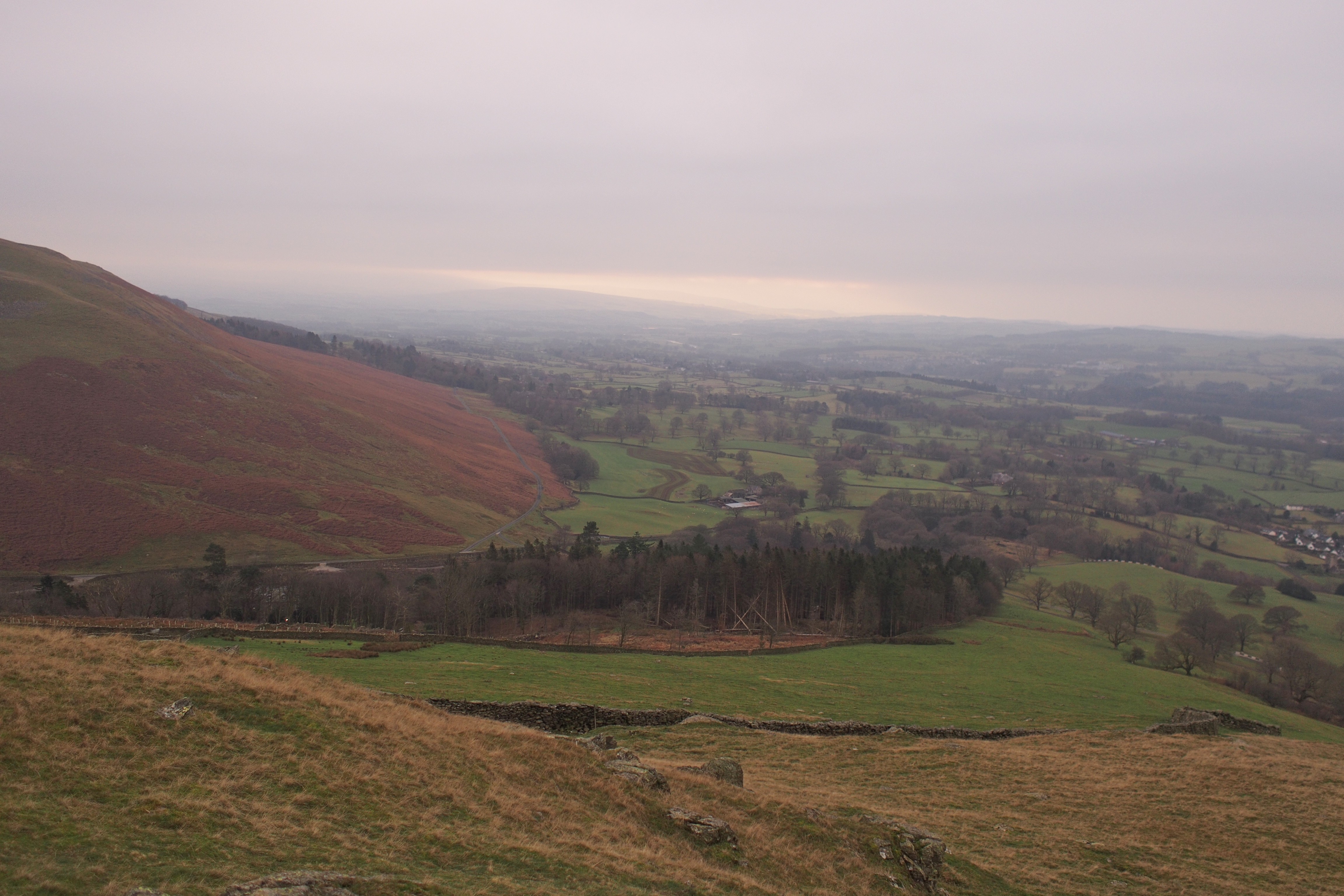 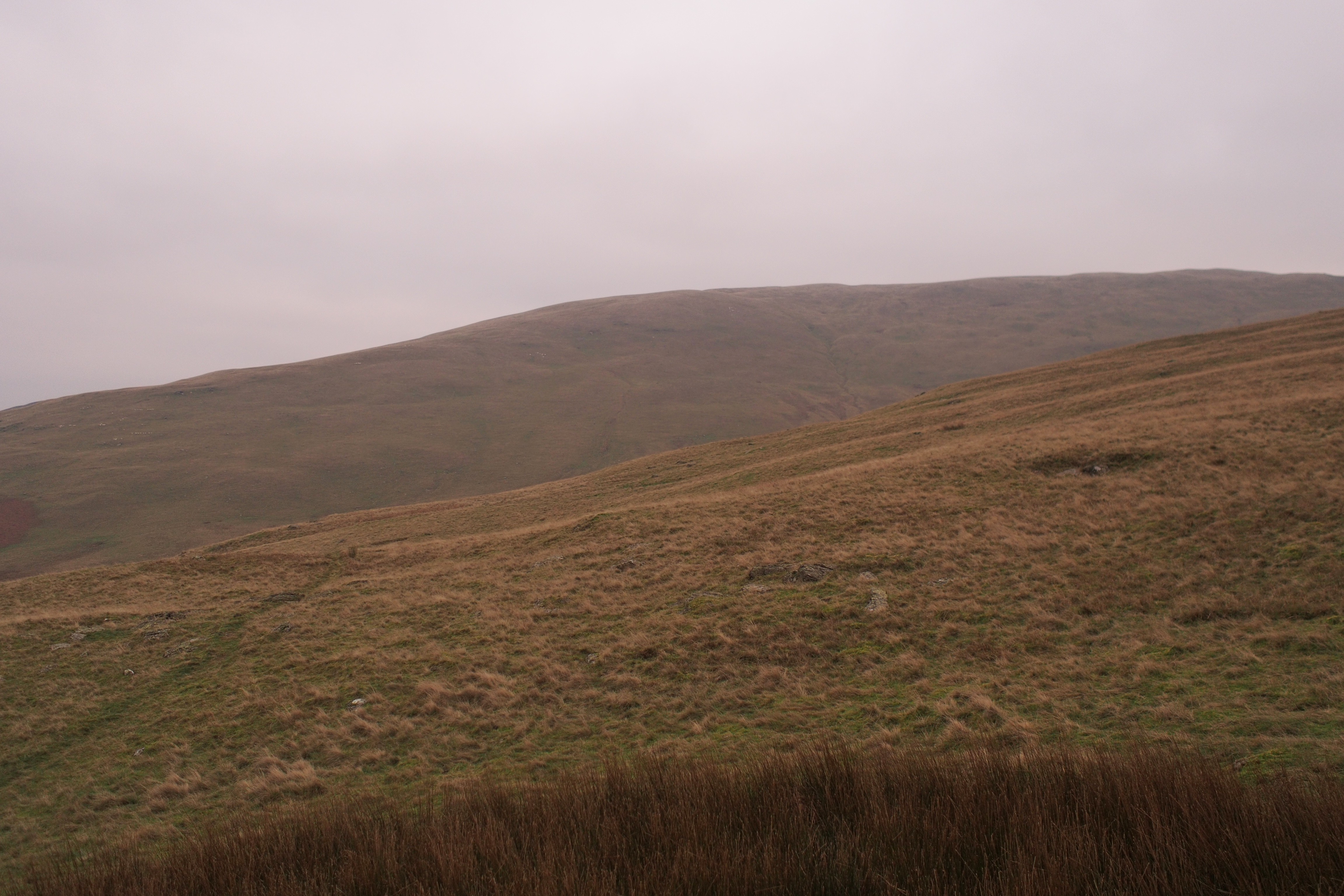 We could see the path heading towards Castle Knott, our next objective. 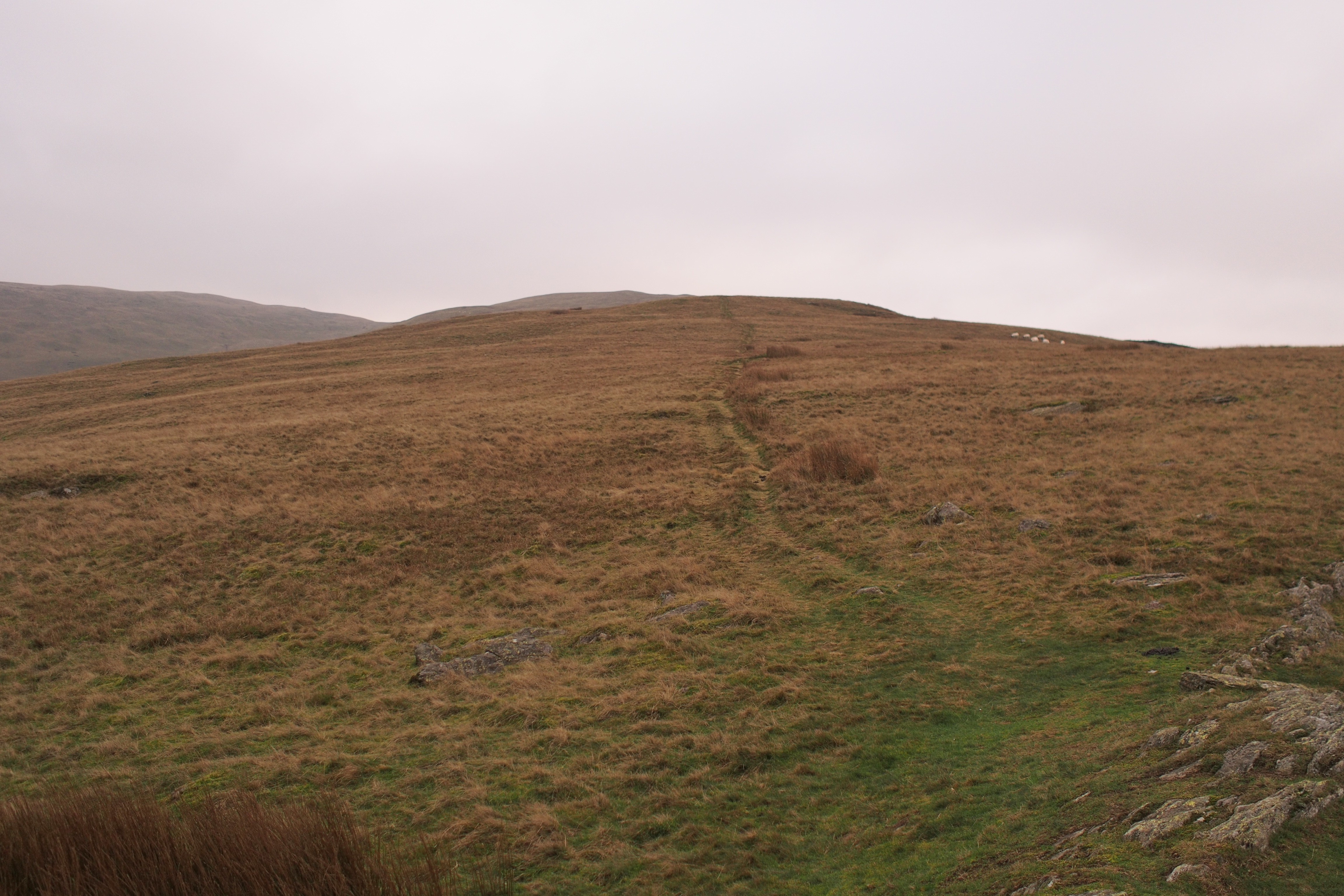 It's a steady climb to Castle Knott on a good path

There's a cairn along the way, I wonder if the views are better on a good day 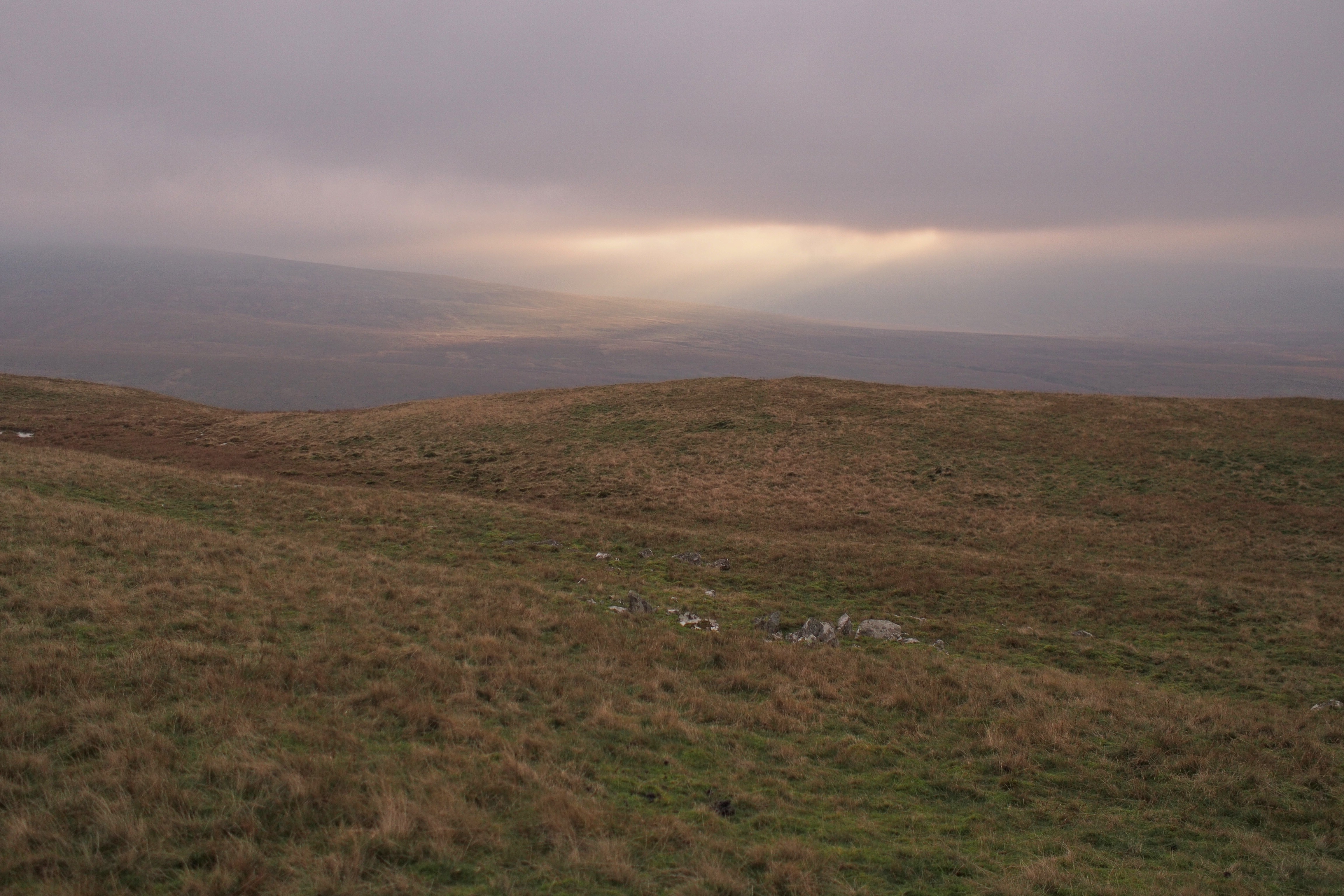 We continued our way to Castle Knott. 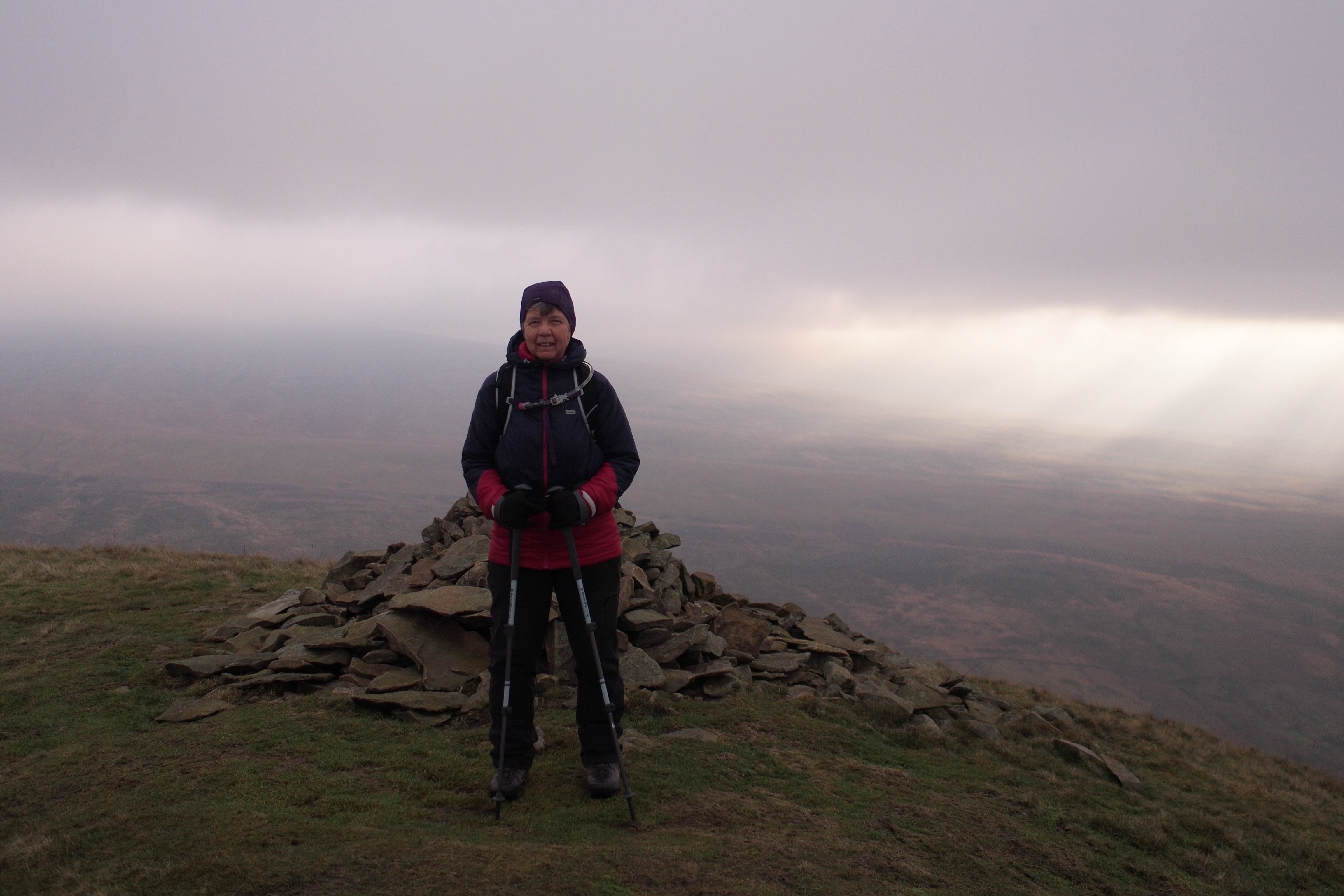 At the cairn you can almost see the main summit but there's a small sting in the tail, a 50m descent into a boggy saddle then a 110m climb to the top, from Castle Knott it looks quite interesting, I wish I'd got a photo, the lowering light made it look further away than it is.

The boggy saddle gave us the chance to rekindle our bog hopping skills then the climb to the summit is over much dryer fellside so we could get into a steady plod. It levels off slightly at around SD662853 where you meet a wall which is followed to the summit.

The summit has a decorated trigpoint, we had a snack and looked at the wonderful views

then set off down the ridge to find our way off. 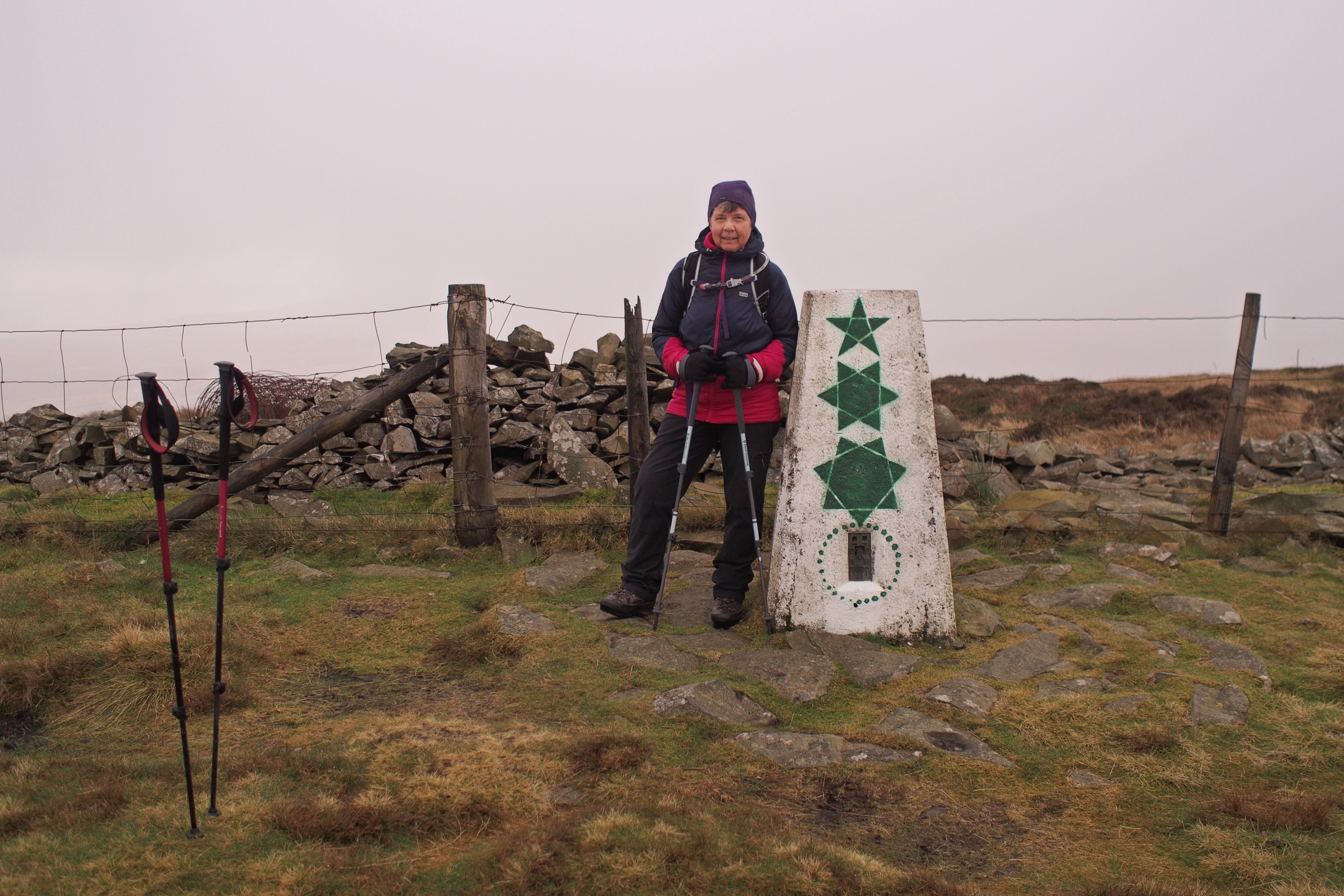 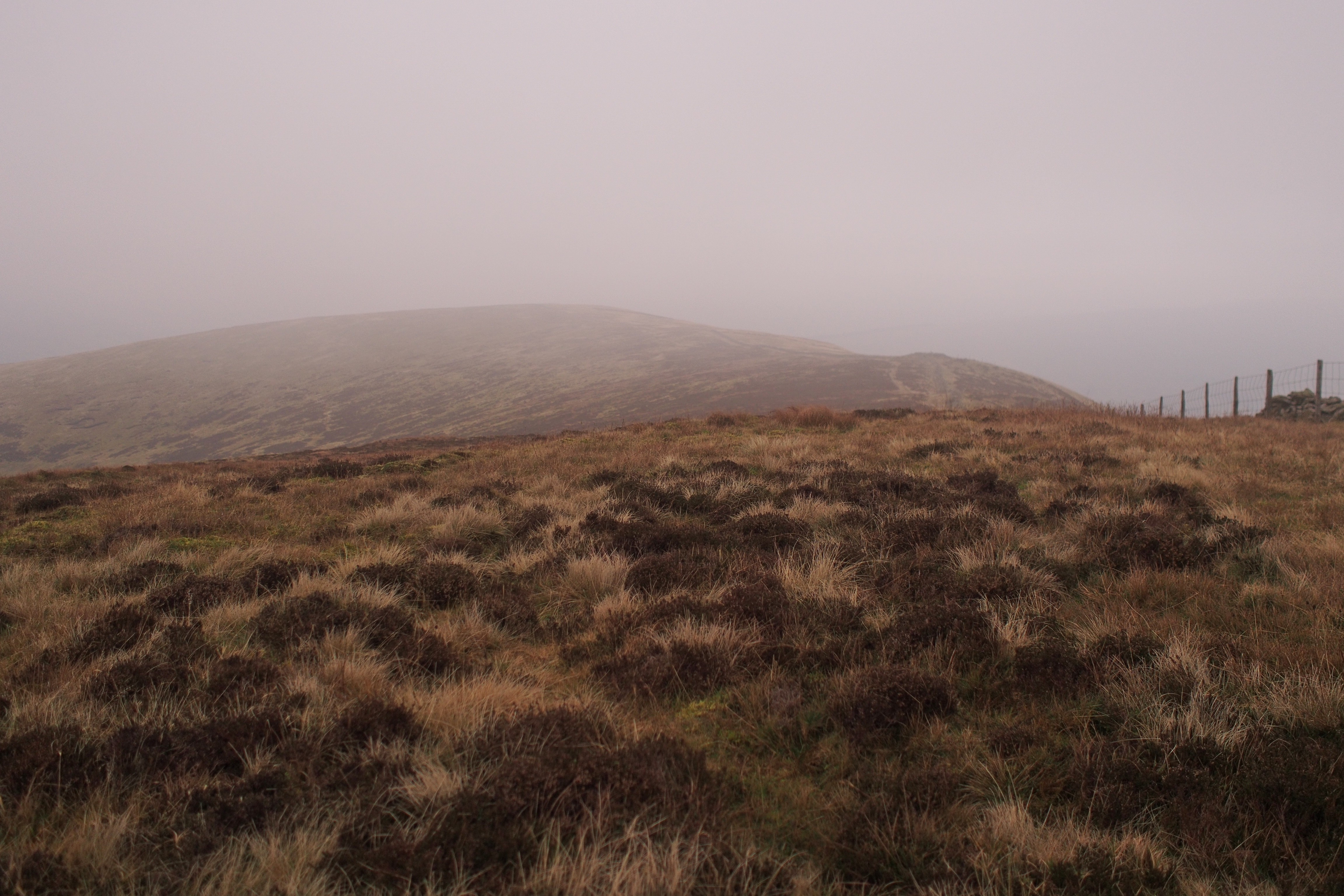 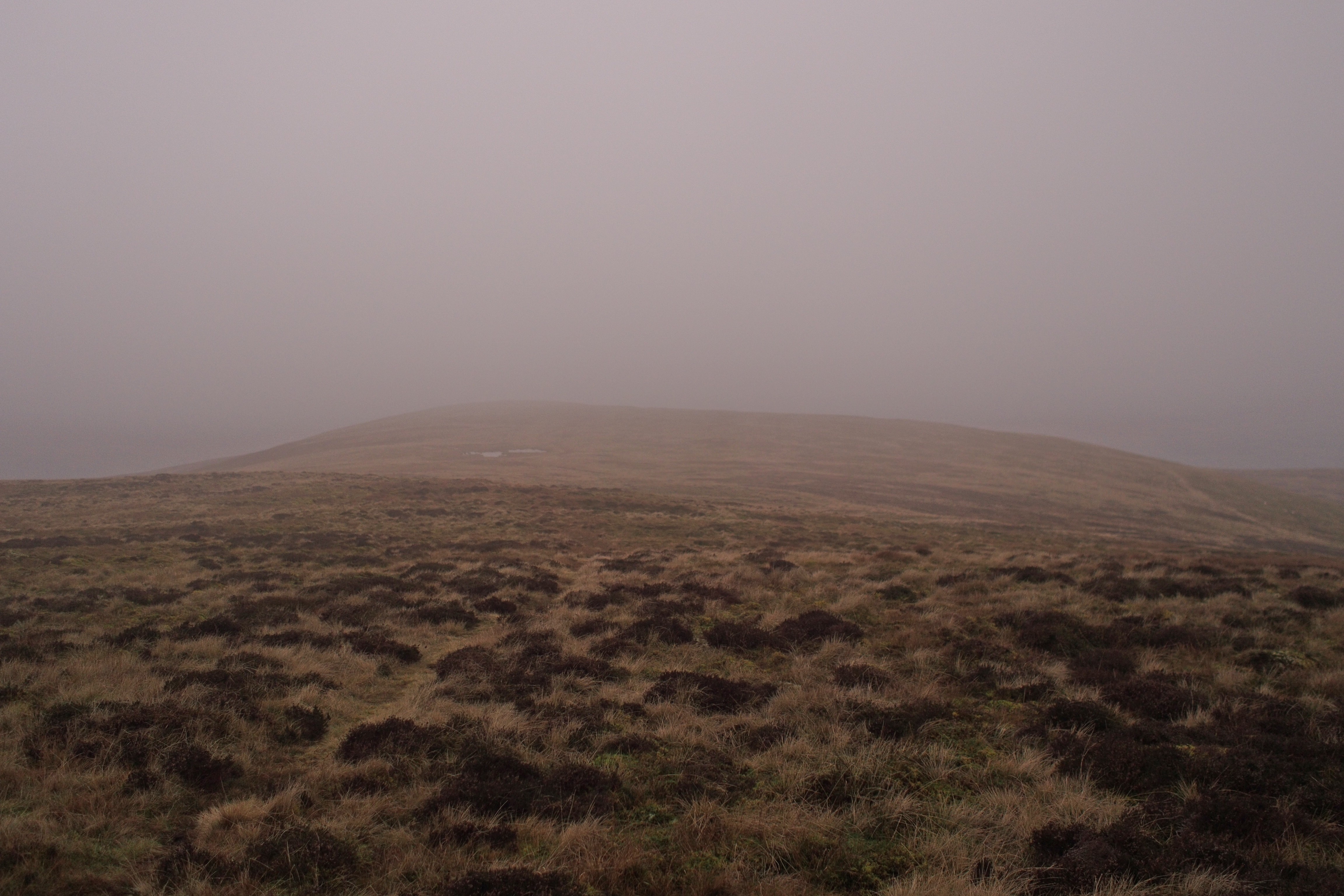 Crag Hill is over there in all that murk. you can juusst make it out 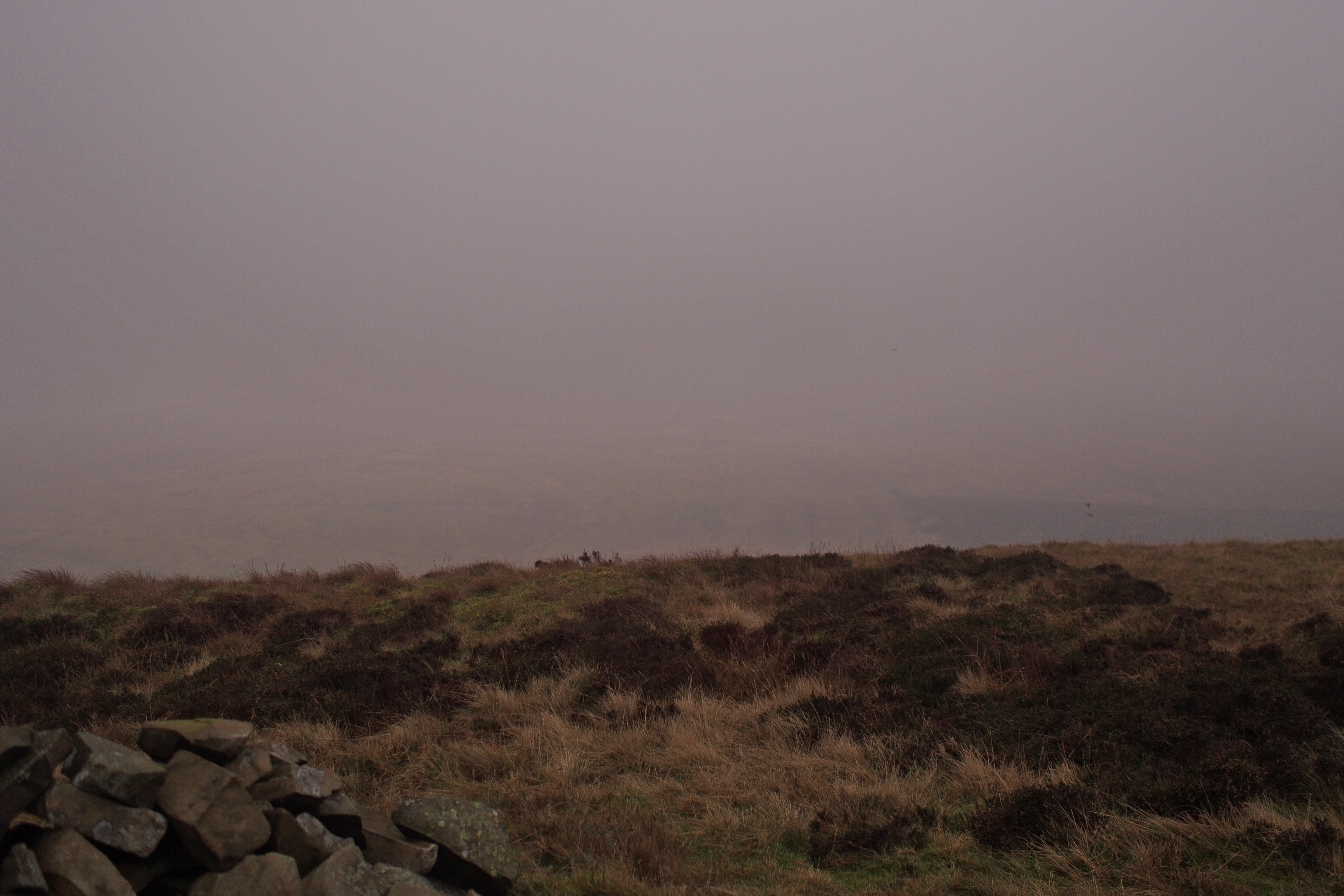 Following the ridge is on a good path by the wall, further along you can see a gate in the wall and about a 100m before the gate there's a stile so we went over this and followed a track that followed the wall on the other side which led to
the gate

so we could have used that instead of the stile

we then took a direct line down the fellside into Barbondale.

This is ok but it's steep, if you do this route keep an eye out for gates in the walls below, they are there and they open, they're a bit hard to spot and there's no obvious paths leading to them, well, that we could see anyway

Once down on the road it's just a hike back to Barbon.

Looking up, it is a steep descent 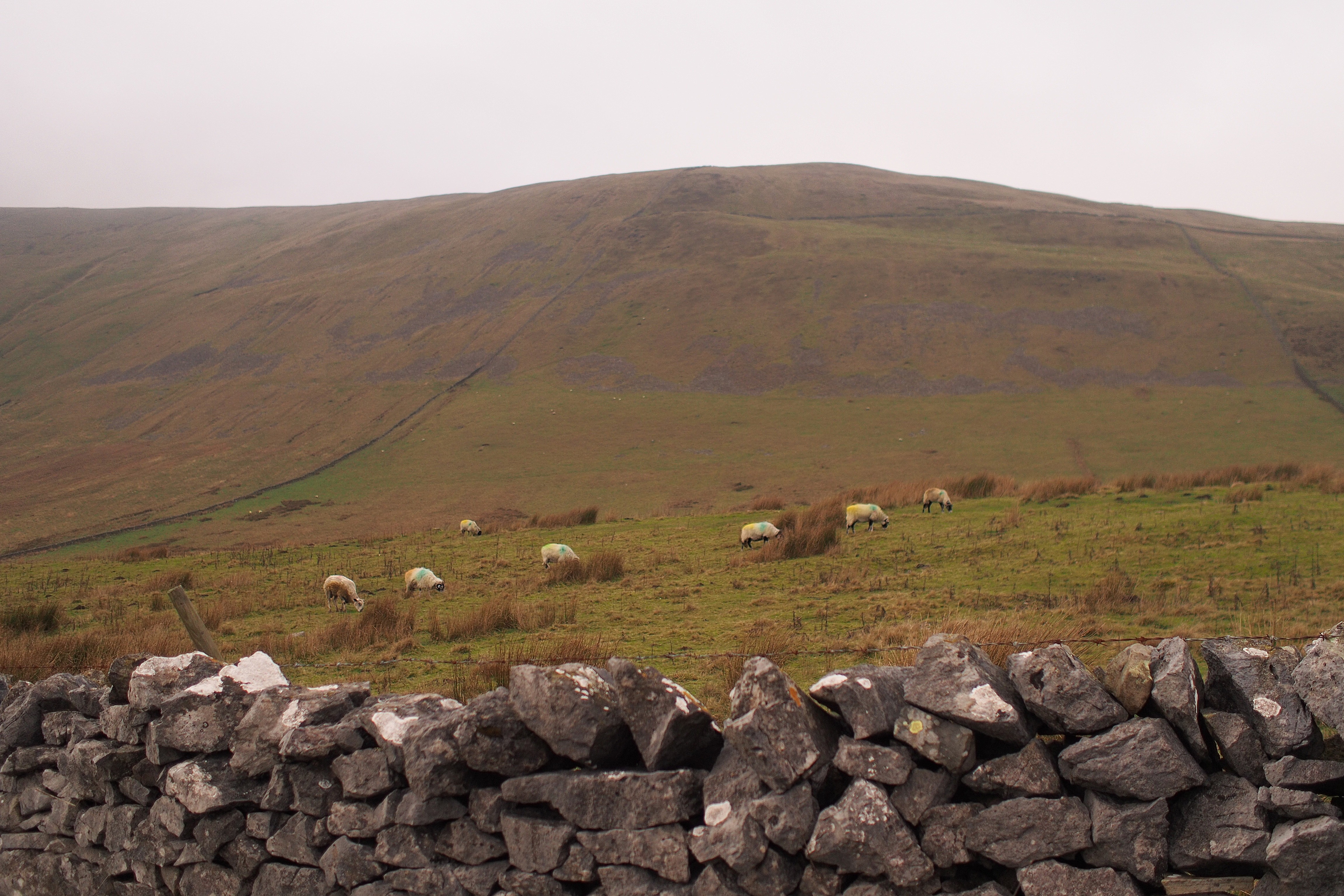 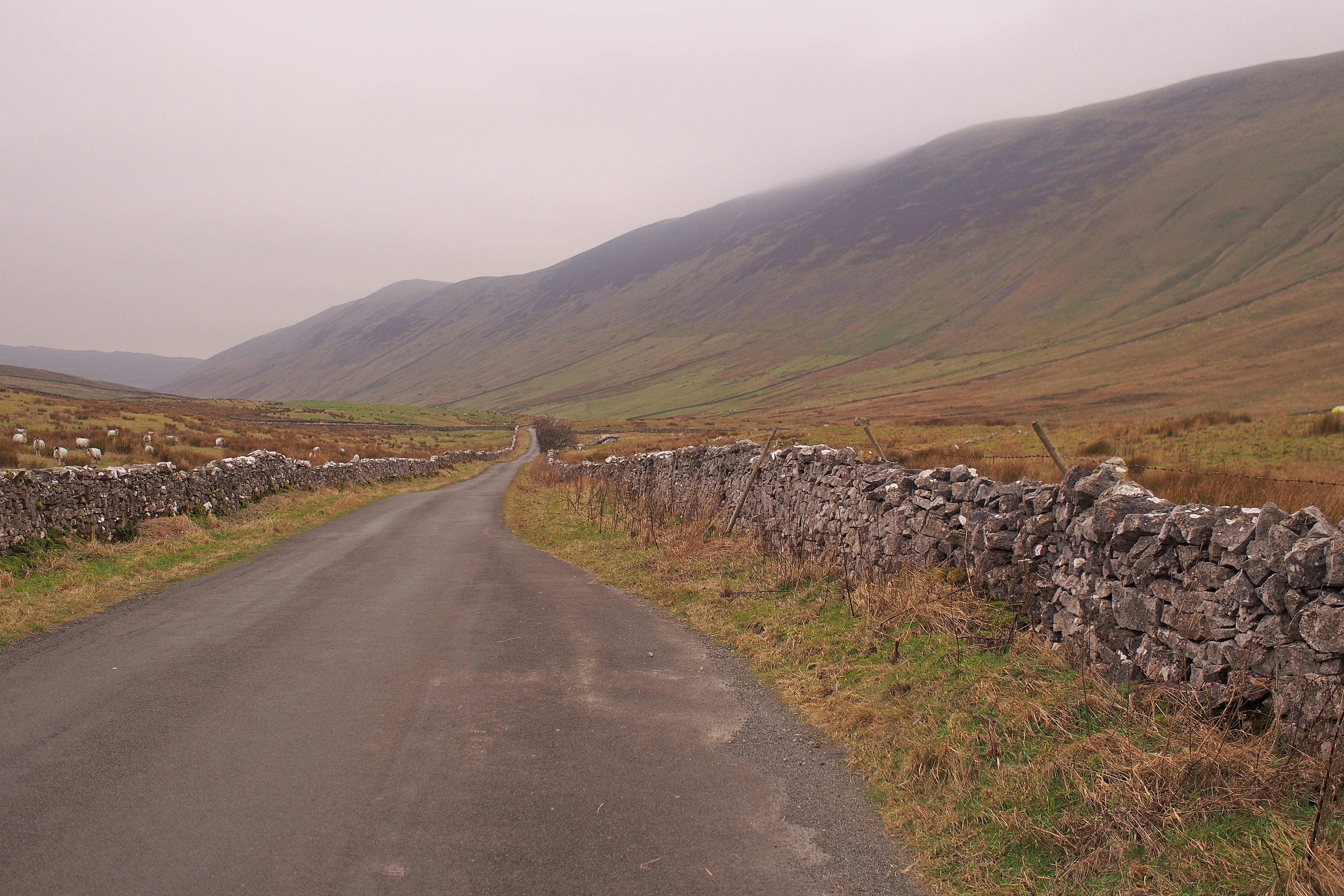 As we progressed we noticed a couple of new looking footbridges over Barkin Beck which led to a waymarked path (not well trodden) alongside the beck, not being sure if this was a path (it's not marked on the map) we kept to the road, as it turned out it looked to terminate at the new footbridge by the information board at SD657828 so it could be a new path to take you off the road.

Once over the FB it's a nice walk through the woods back to Barbon.

We saw this on the way, is this an old railway bridge, seems quite substantial 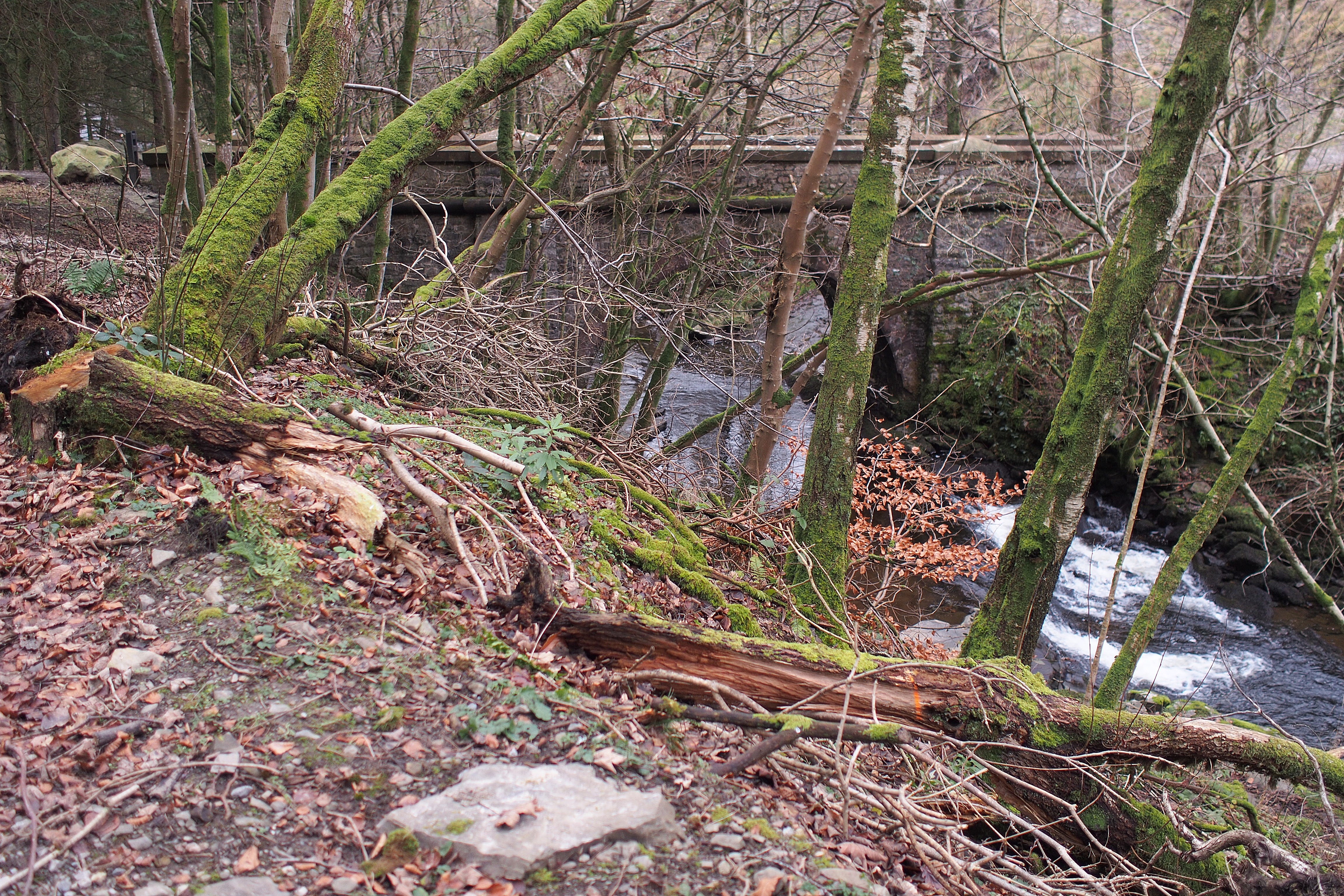 It's a nice Mountain, we'll do it again in the summer, the views to the Howgills, Lakes and Dales are excellent, well, that's what I've read

Cheers and Merry Christmas to all Walkhighlanders

Shame you didn't get better views but it's not a bad fell at all. I had no issues at Mill House but there was some confusing sinage once I'd already passed though a gate/over a stile (I can't remember tbh

johnkaysleftleg wrote:Shame you didn't get better views but it's not a bad fell at all. I had no issues at Mill House but there was some confusing sinage once I'd already passed though a gate/over a stile (I can't remember tbh

Thank you JK
I think we'll give Calf Top a visit on a good day in spring and hopefully get the views we missed. We might give the
Mill House route back a go as well, I've noticed the route of a dismantled railway on the map, do you know if that's possible to walk on without access problems? it looks to be a good way back to Barbon.

johnkaysleftleg wrote:Shame you didn't get better views but it's not a bad fell at all. I had no issues at Mill House but there was some confusing sinage once I'd already passed though a gate/over a stile (I can't remember tbh

Thank you JK
I think we'll give Calf Top a visit on a good day in spring and hopefully get the views we missed. We might give the
Mill House route back a go as well, I've noticed the route of a dismantled railway on the map, do you know if that's possible to walk on without access problems? it looks to be a good way back to Barbon.

I made my way back along the road, my route will be on my report. I suspect the access issue may be people walking through some of the properties to get to the fields. If anybody got grief for the way I walked then somebody is a bit of a @rse quite frankly.