One of the greater advantages of getting lost is definitively the fact that a "there and back" route becomes a circular route. Or a figure of 8. Or a plate of spaghetti for that matter. Much more interest, much more to see.
As I had quite some spare holidays in between two jobs, I decided two spend some of them in the mountains. And as tectonic plates have not shifted and changed the Netherlands into one of Europe's mountaineous regions, I again chose the closest mountains from my doorstep: a 6 hour drive to Vosges in France. 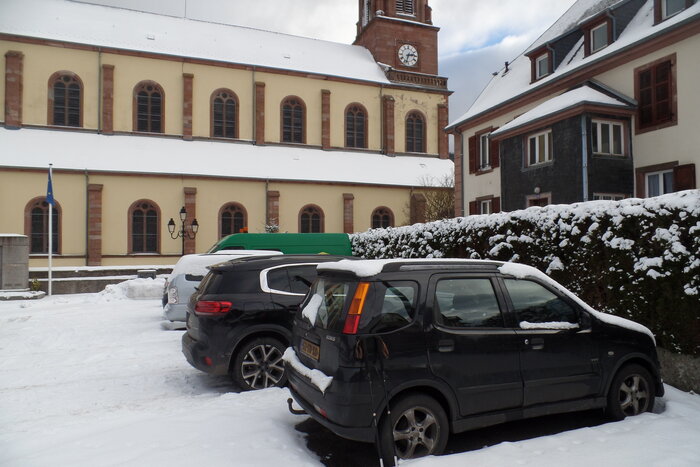 I parked the car next to the church in a village called Le Bonhomme, which is on route for walkers doing the GR5, the long distance path from Rotterdam to the Alps. The snow on the car gives away this photo was taken when returning, not when arriving. I do not drive around with 10 cm of snow on my front window!!! Just to be clear!!! 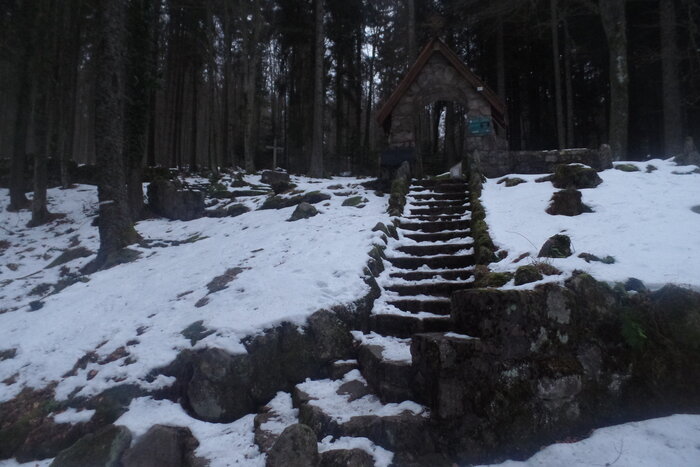 A steep pull up brings you into a dark fir tree forest, with lots of reminiscents of the first world war. I tried to hurry, as it was getting dark. 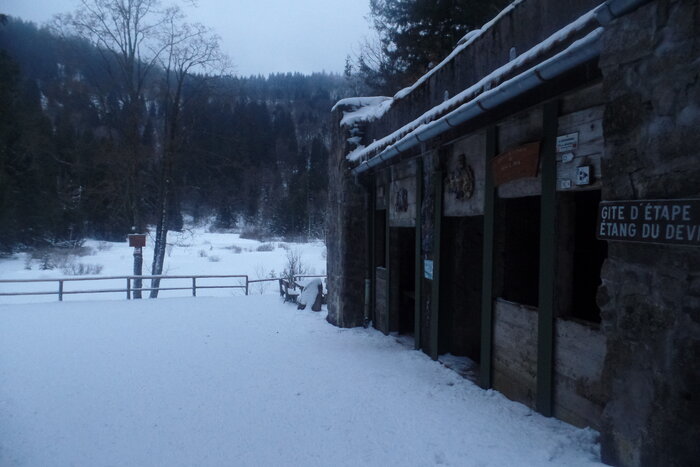 Got the tent up next to a lake at just under 1000 meter altitude, as the early night was falling and melted some snow for a lovely freezedried "porcini". Absolutely lovely, my first meal after breakfast. The temperature was -5'C and I was quite fine in my camping clothes. I stayed up for a while to enjoy natural lights from snow and low cloud. The night was full of sounds from falling snow, wind through treetops (though deadstill where I was stood), squeeking branches and squeeking ice on the lake. The next day I woke up like reborn. I guess that's what 12 hours in a sleepingbag do to you. Clouds were still low, but visibility was good. I decided to pack my stuff, and eat my porridge with blueberries breakfast in a nearby bunker/ammunition depot from the great war. After coffee, and after getting the ice of the gascanister, I headed uphill, following the GR5-signs with the red rectangle. I thought. As it turned out later, I mistook a "turn right here" rectangle for a "go straight ahead" rectangle. In my defense, this sign was not well placed, but I couldn't be arsed to take a photo of it on my way back to back up this statement. Historical interest on this route is incredible, the woods are full of old bunkers and other war-related buildings. So after a while, I realised the red rectangles had dissapeared and other colours and shapes indicated I was on the wrong track. Retracing is no fun though, so I kept pushing forward hoping for a clue of where I was further on up.
No such luck. After a while the path started to go downhill instead of uphill, and it took me to a hamlet, with a few farms and thank heavens a very friendly farmer who explained to me I'd walked 30 minutes off the eastside of my map. After thanking the farmer, a steep pull up along a burn, saw me back on the map, towards a skicentre, and after that towards a lake that was on-route again. The lake really lived up to it's name of Lac Blanc. The tower on the leftside is the route up. 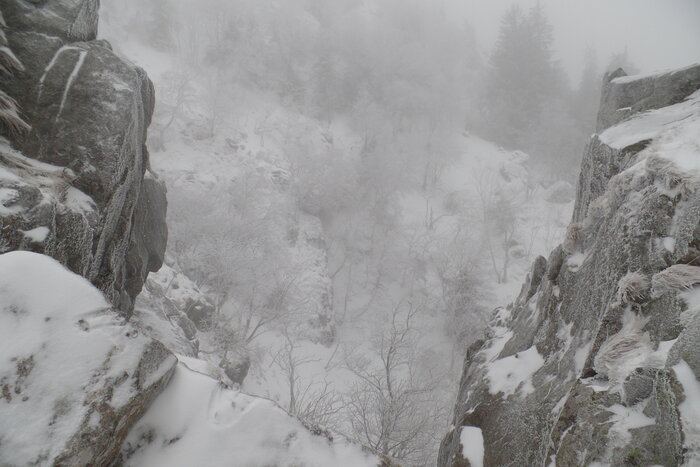 Happy chap, succeeded to get uphill and back on route The plateau I then need to negotiate, at about 1300 meters altitude is in complete whiteout, frozen and has me wading through crutch deep snow. I decide to descend into the forest again, choose a paralel route along the plateau through the fir trees for about 45 minutes and camp between the trees at the other side of the plateau at about 1200 meters altitude. Camp is set up before nightfall, but strangely enough I'm not hungry and I wait for the dark before cooking up a meal. During the night temperatures drop to -8'C, and the world is much quieter than on the first spot. The next day the sun is shining, despite some ominous clouds. It's the first sunshine I've seen since I'm here. Weather forecasts predict whiteouts for the following days again, so I take this opportunity to cross the plateau in glorious sunshine and make my way back in the direction of my car. This time following the GR5 in the opposite direction. It can be done in one day, but that means I cannot get lost again. I do have enough food with me to get lost for another 3 days though, so there's no hurry whatsoever. Passing Lac Blanc again, from the other side now, with more and better views. At the end of that same day I arrive at the village again. The church where my car is parked can be seen centre picture. It's late that same evening that I arrive back to the safety of my house. Long drive for a very short stay? Maybe, but it had a great time: tiring and intense but deeply satisfying.

With my new job I will have more holidays, and I can't wait to have the orange coronacode for the UK updated to yellow or green by the time it's March/April, so I can finally visit Scotland again.

Fingers crossed, see you then!

Looks great. I was in that region around Christmas, climbing Grand Ballon on Christmas Eve. The conditions were very tough, but definitely not as cold as on your trip. Respect! Although the Vosges and the Jura mountains are not especially high, they're often colder and windier than the Alps. Navigation can also be very difficult, especially in the snow. You're not the only person to misread the signposts

Great - as long as you have the right gear

Did you see or hear any wolves? I believe there are 1000 or so in France and I would have thought the Vosges would be good wolf country - though they wouldn't know to follow the red markers

Pointless Parasite wrote:Looks great. I was in that region around Christmas, climbing Grand Ballon on Christmas Eve. The conditions were very tough, but definitely not as cold as on your trip. Respect! Although the Vosges and the Jura mountains are not especially high, they're often colder and windier than the Alps. Navigation can also be very difficult, especially in the snow. You're not the only person to misread the signposts

Thank you Pointless Parasite. Yes, it is quite a strange area for temperature and snow cover. Driving in from the German side, in pluszero temperatures, you can spot the white hills from far. Even the lower ones are covered in snow.
I sincerely hope I'm not the only person to misread the signposts. I'd feel even more stupid

past my sell by date wrote:Great - as long as you have the right gear

Did you see or hear any wolves? I believe there are 1000 or so in France and I would have thought the Vosges would be good wolf country - though they wouldn't know to follow the red markers

Thanks you Past my sell by date. Wolves, although they live there, I did not spot. Neither the lynx that's supposed to roam the place as well. I did see some pig pawprints in the snow, but that might be misreading the prints of a big dog.
We do have two or three wolf-families residing at the area where I live in The Netherlands, but apart from poo and a destroyed deercarcass I never saw them either.