I had originally thought of Harter Fell as a summit camp on this trip, but it looked to be a good bet to fill Friday with - I had worn Jackie out on our cycling circuit of Windermere the day before, and our planned ascent of Jack's Rake and a couple of the Langdale Pikes looked to be too much. Harter Fell would have the convenience of starting at the top of the Hardknott Pass, meaning not much more than 300m of ascent. It would also be a new area for me, having never really ventured properly into the SW of the Lakes. On the downside, it would be the only time between arriving and leaving at Langdale that we would actually use the car (was hoping not to use it at all).

Although only 8 miles from our start point, it took about 40 minutes to drive there over the Wrynose Pass then up the stupid side of the Hardknott. This put me in mind of an excursion I had done in my mid teens, when I had persuaded my mum to take us to the Lake District over the Whitsun half-term. I had left her and my sister to walk around Elterwater and cycled from High Close YHA over the Wrynose to the Duddon Valley. From here I had done a big horseshoe of the upper Esk taking in Crinkle Crags, Bowfell, Esk Pike, the Scafells and Slight Side, before cycling back over the Wrynose. Quite a day! 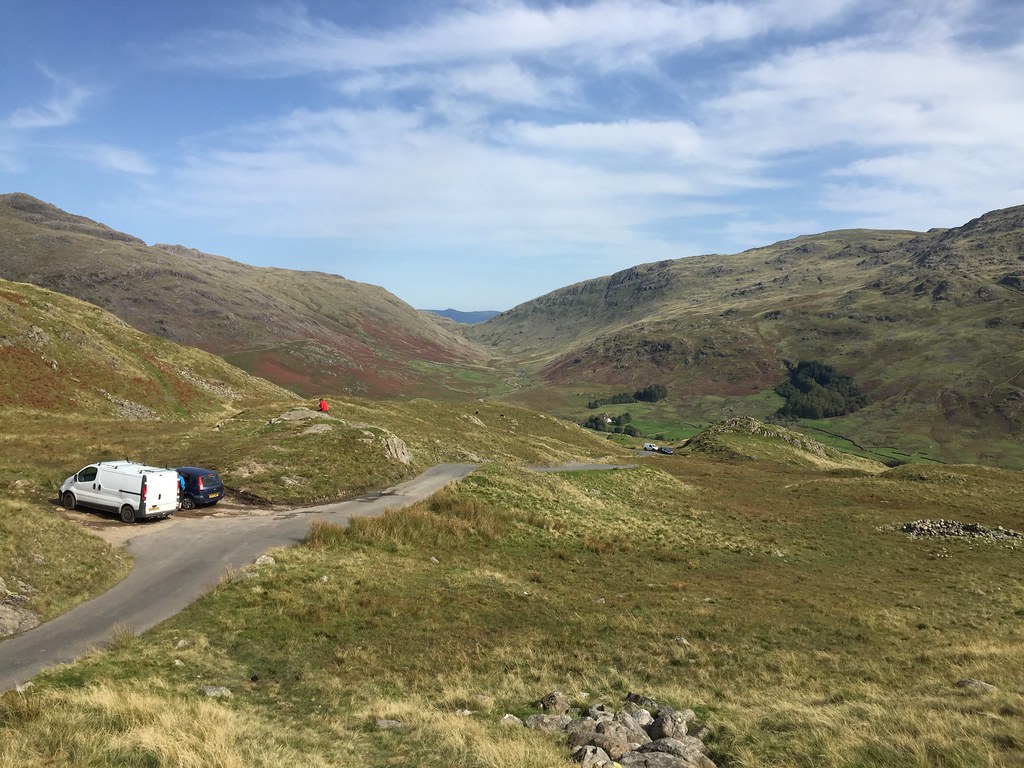 Duddon Valley from the top of Hardknott Pass

Today's walk would be a bit less involved than that. The slowest bit of the journey was probably up Little Langdale rather than over the passes themselves, but eventually we found a spot to park at the top of the Hardknott. It was a bit cool and breezy, but looked like it would be a nice day. 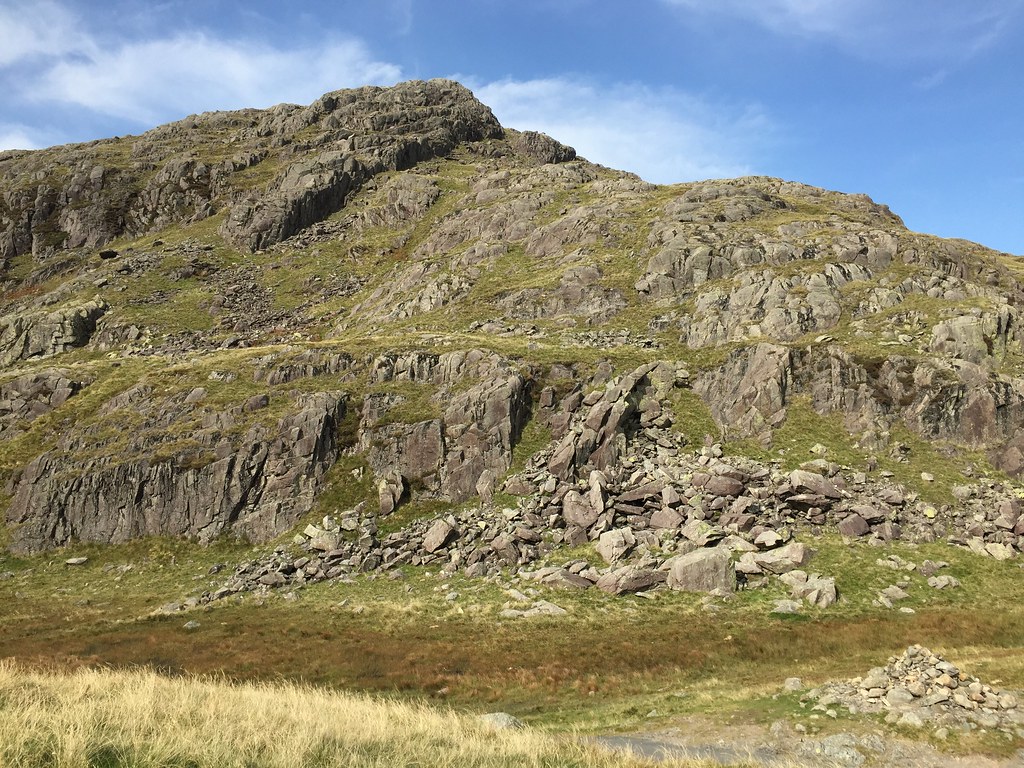 Hard Knott from the pass

We found a path heading the right way immediately but it was a bit more obscure than the average Lake District path...and we had to do some downhill first before reaching the main bulk of the hill. It didn't take long to get some good views, and before too long we were weaving around crags towards the summit. 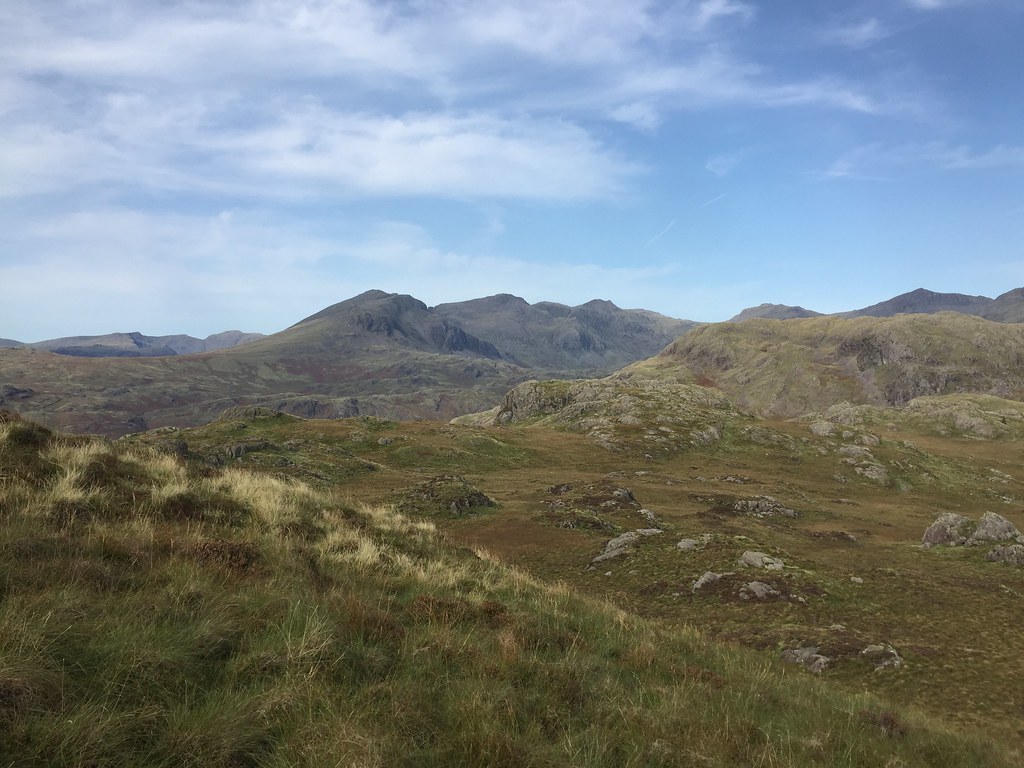 Slight Side and Scafell 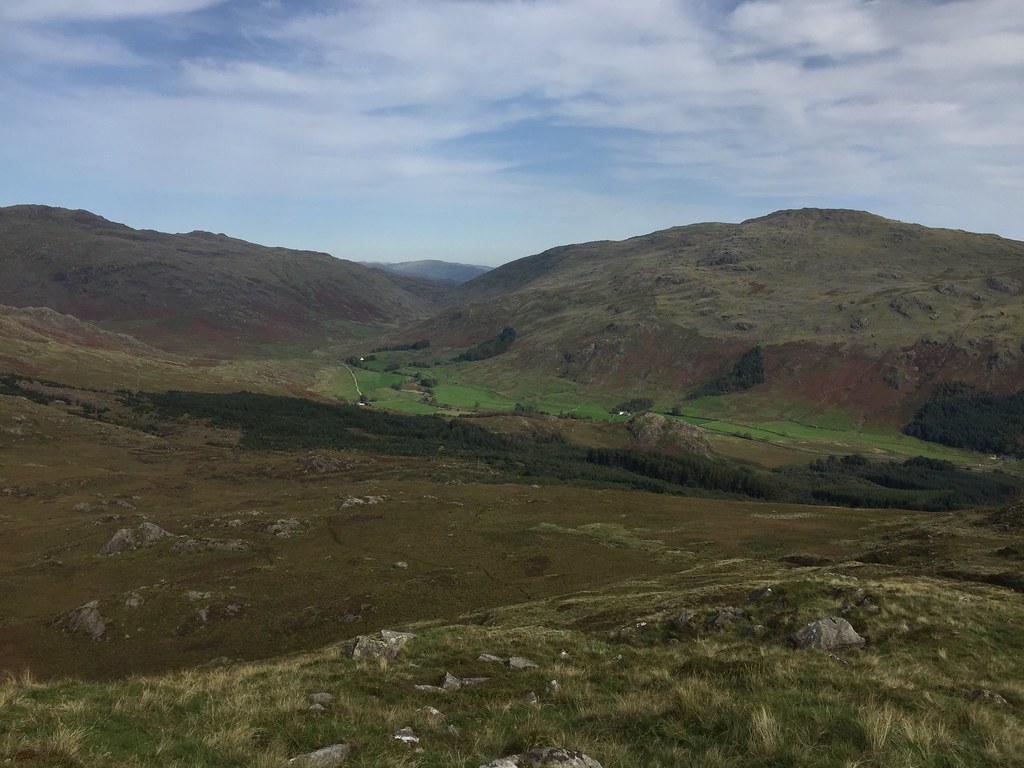 Although I didn't know it until we got back to Inverness the following Tuesday, today was a new start of sorts - round about now, the bit of paper that concluded my divorce was being signed in a court somewhere, some 3-and-a bit years after the breakup had occurred. It was something of a relief to get that sorted out finally

Our flow was interrupted by Jackie getting some phone signal for the first time today and making a quick call. I also got a missed call from a friend, and by the time I had called him back, 25 minutes had disappeared

. Soon after that, we arrived at the summit where we met the only other person on the hill today. The outlook was a little hazy, but the hills on the Isle of Man were perfectly visible to the west, as well as a lot of the more coastal hills and estuaries that I had never really seen properly before. 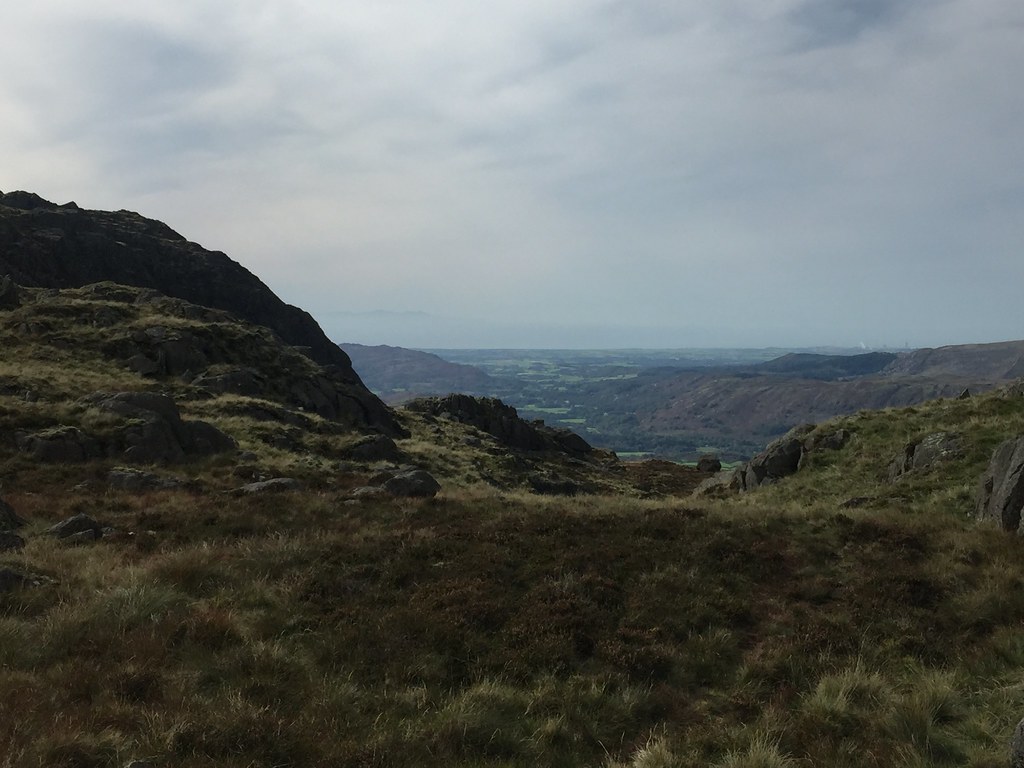 Eskdale and out to the Isle of Man 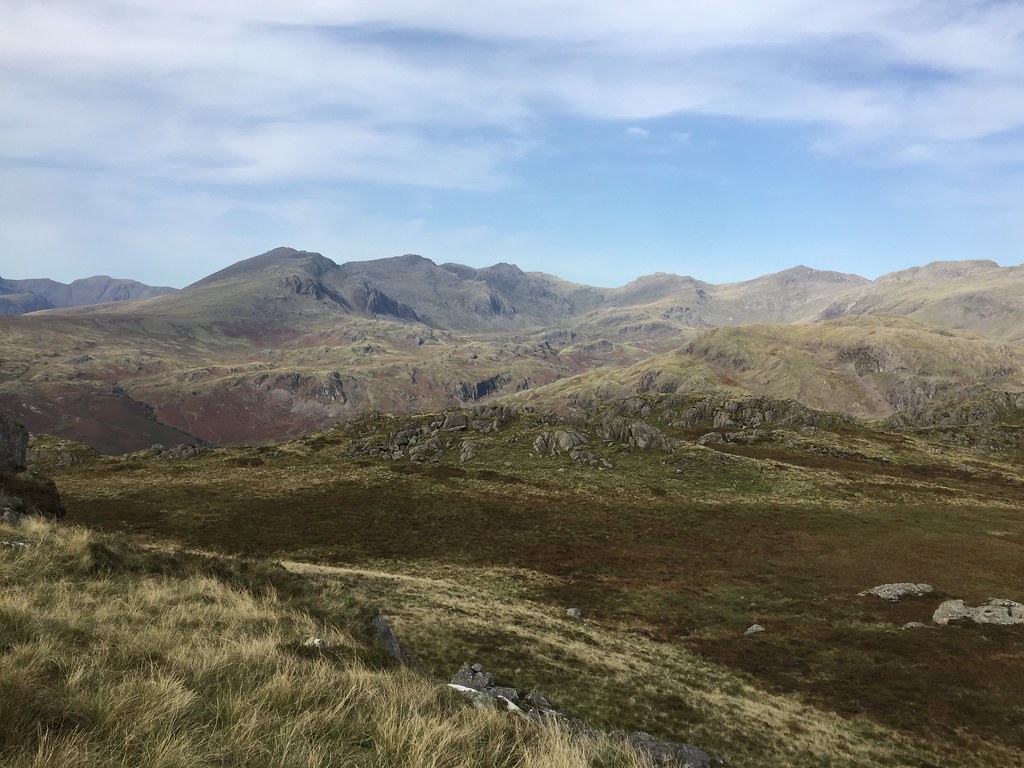 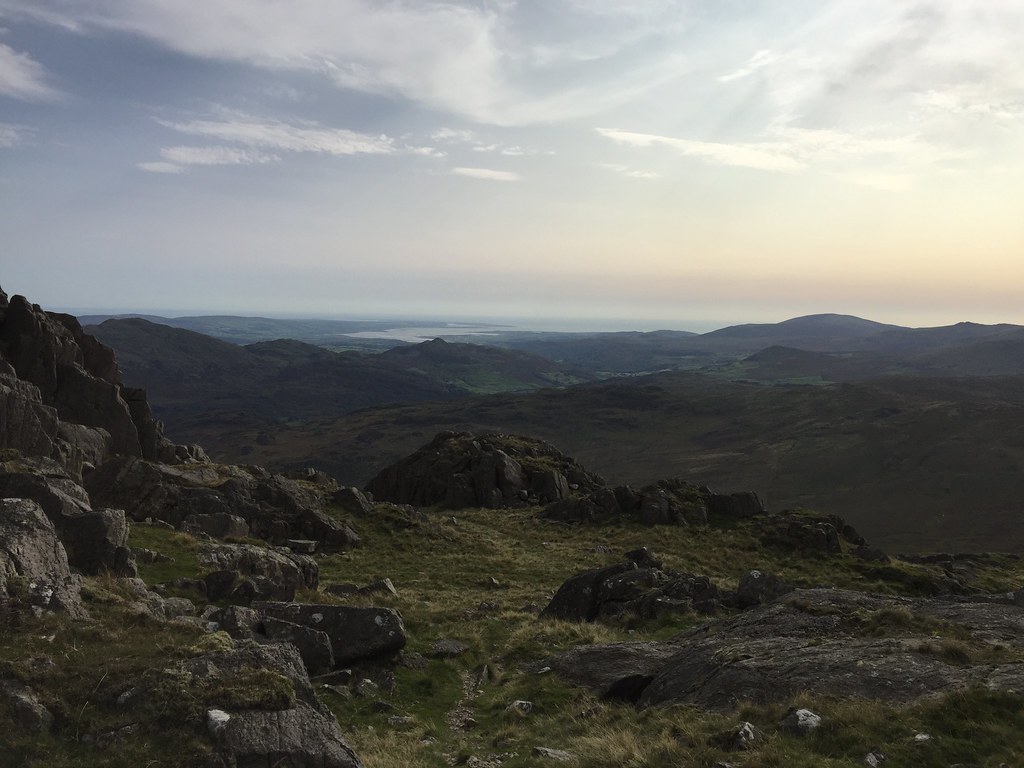 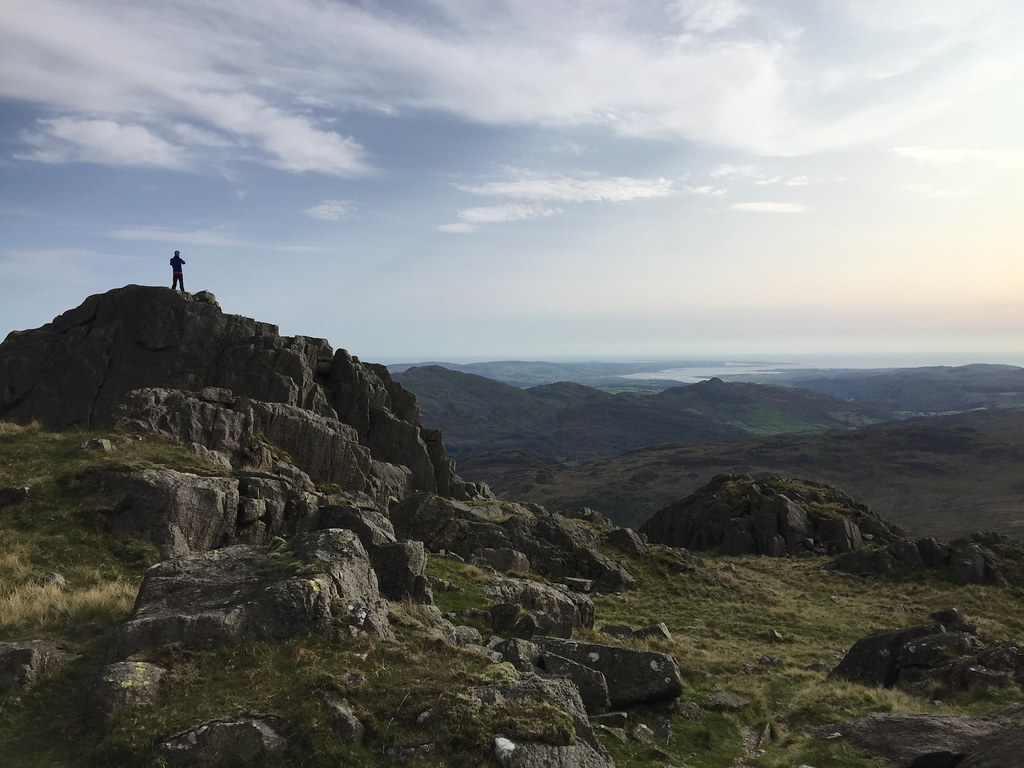 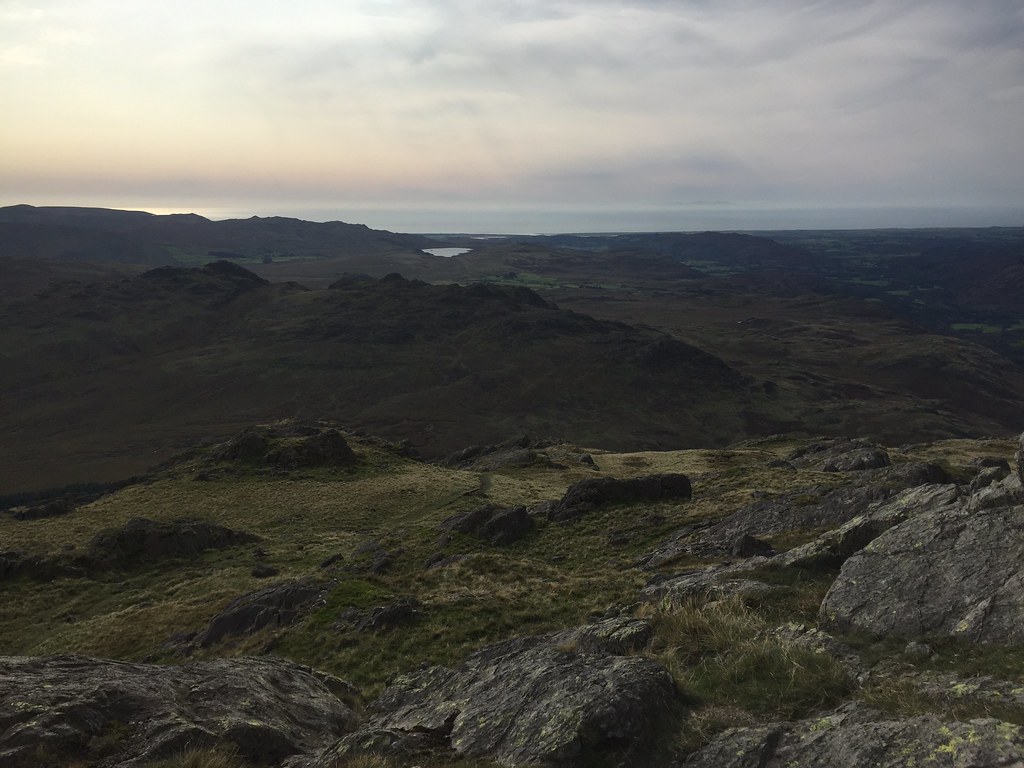 Devoke Water and the coast 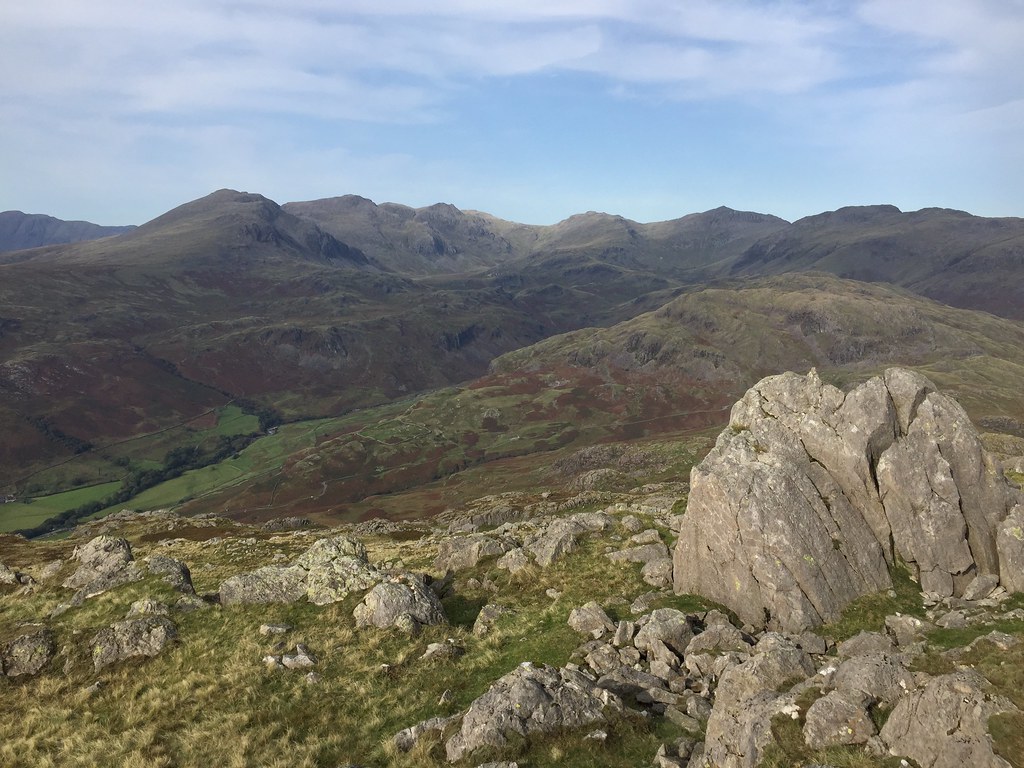 The actual summit was a rocky outcrop next to the trig point which we accidentally climbed the hard way before finding an easy route down the back. 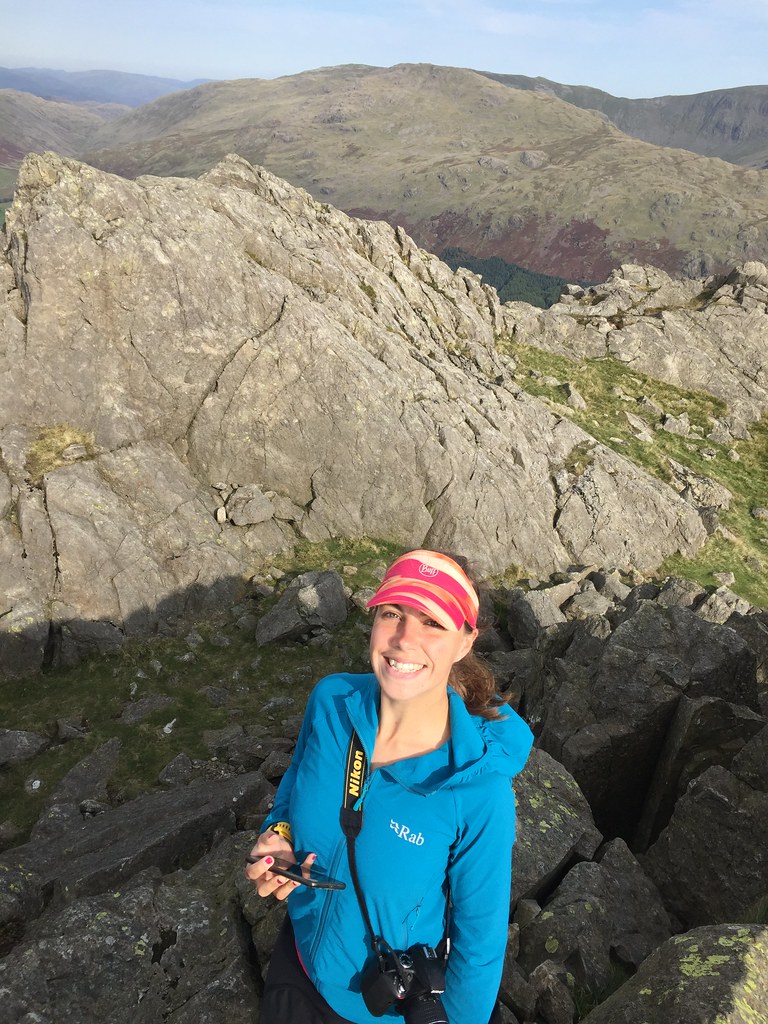 Jackie from above the summit 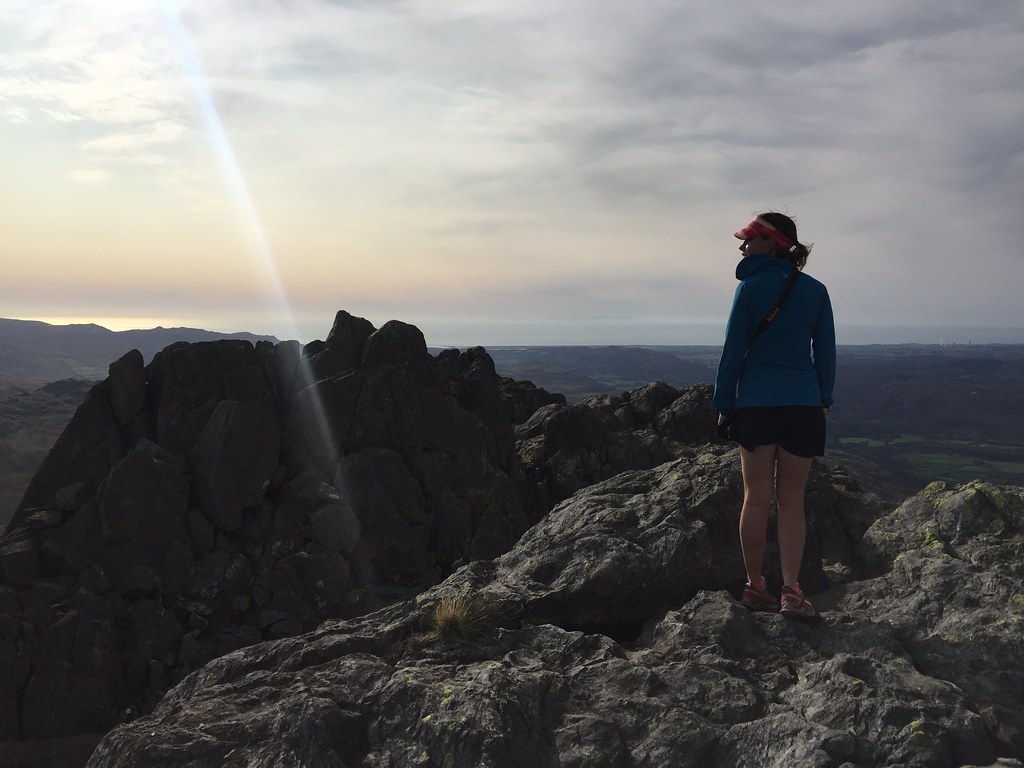 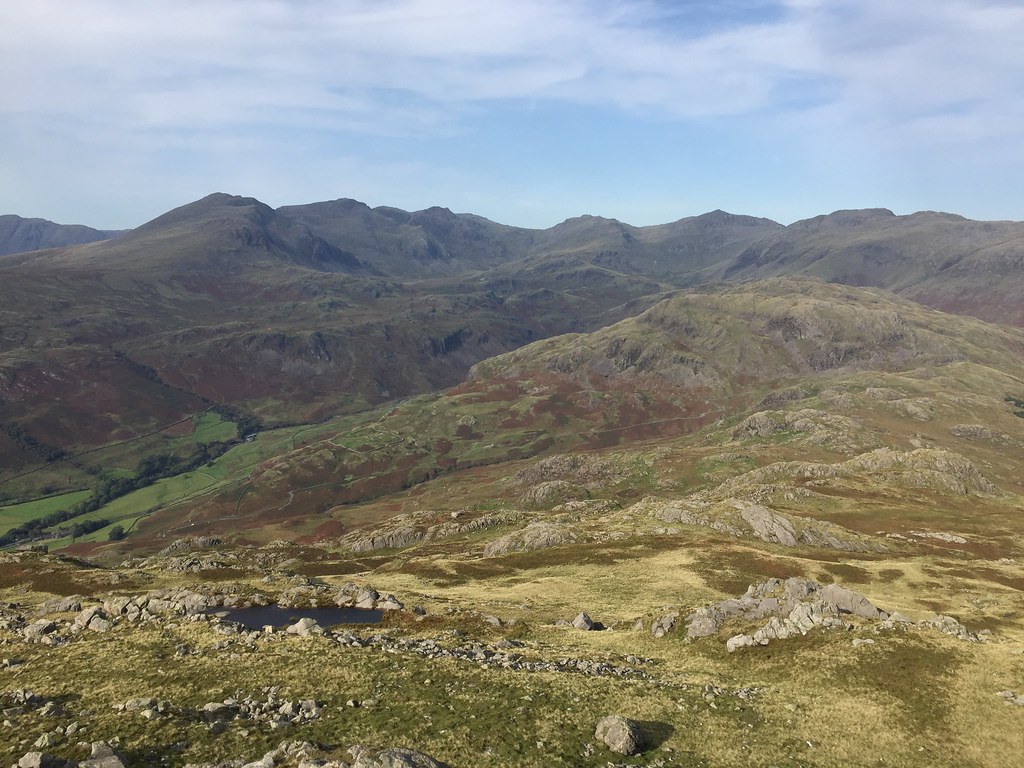 Then it was back down by a similar route, although we veered a little more to the east higher up. Once down on the section of moorland that we had to traverse back to the Hardknott, I decided we should try and stick closer to the highest ground. This turned out to be more tussocky and wet, and tipped Jackie over from being slightly tired and unamused to barely being able to walk. She was like a zombie when we got back to the car, so it was probably best that we hadn't attempted a longer day on the Langdale Pikes. I had hoped to nip up Hard Knot to the north of the pass after this, but felt guilty abandoning her. Instead we took a leisurely journey back over the Wrynose to Langdale, arriving home not too late for once. 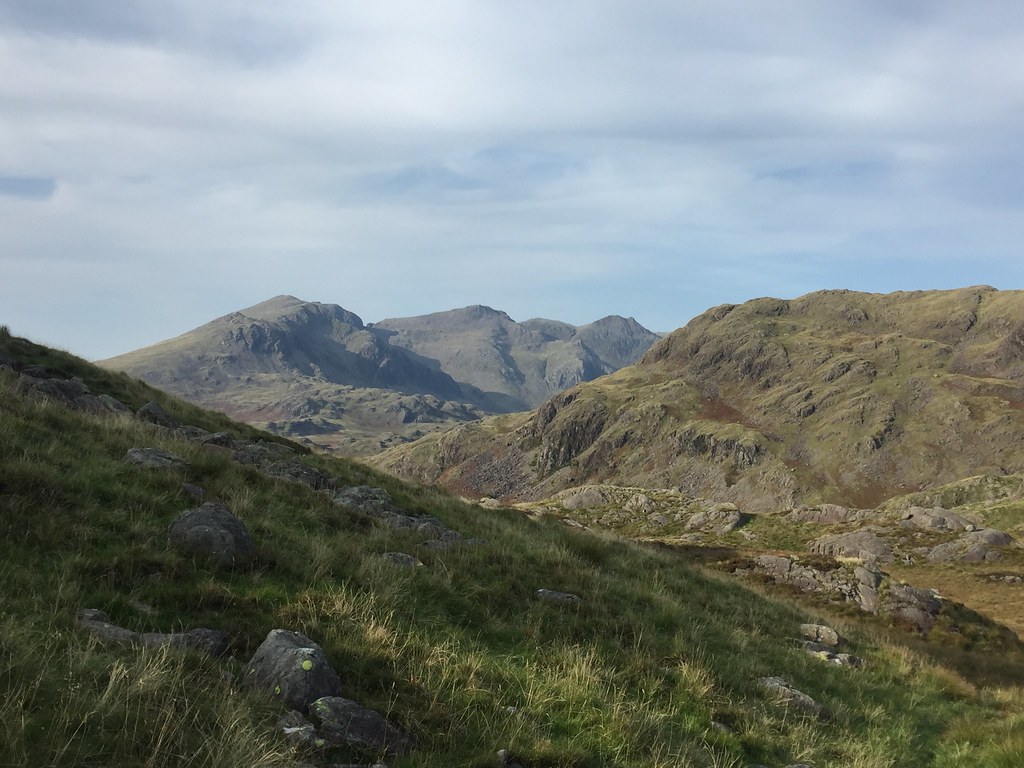 Slight Side to Scafell Pike 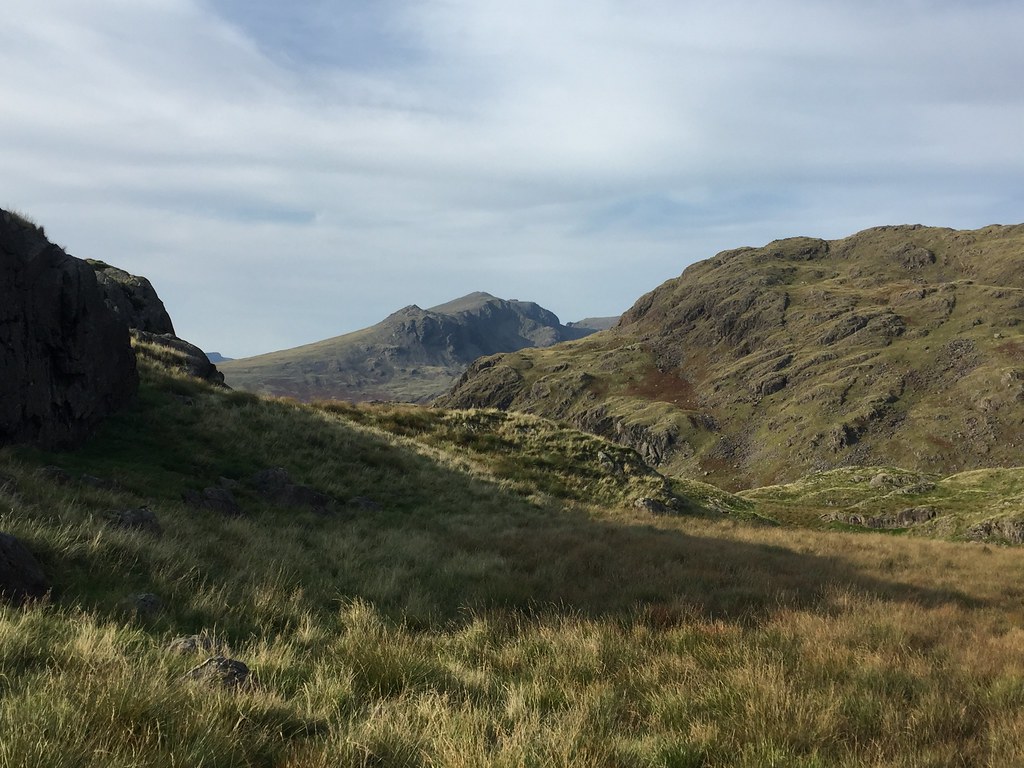 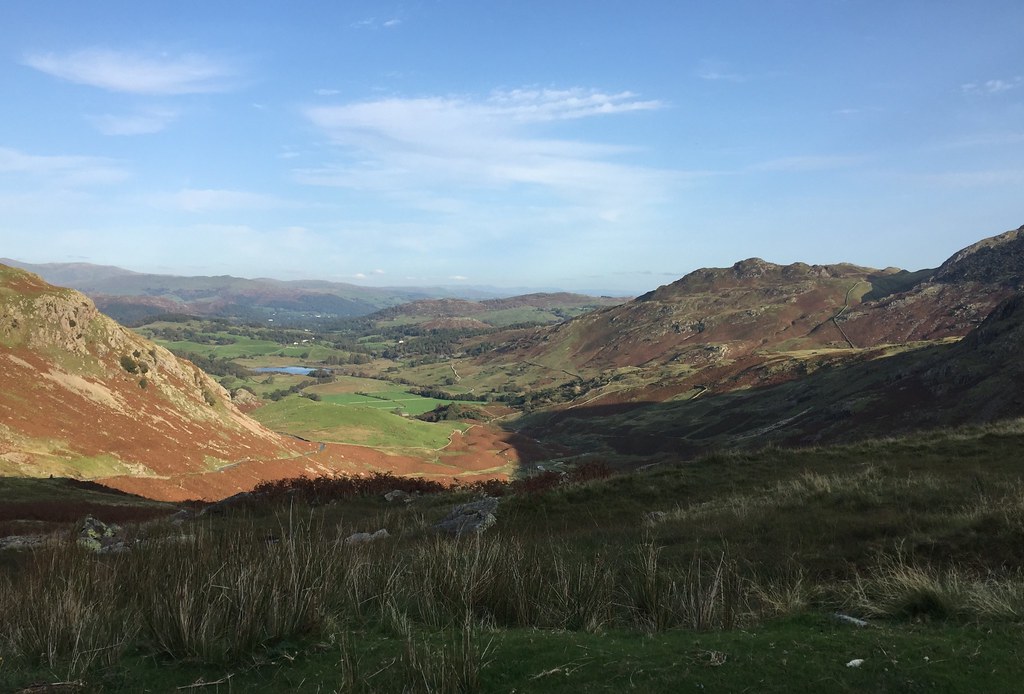 Little Langdale from the top of the Wrynose Pass

As well as the aforementioned paperwork, tonight was our last staying with Jackie's parents in Langdale, and theoretically the end of our Lakeland trip. What had started out as an off-the-cuff couple of days visit ended up turning into a really pleasant week with amazing weather. Given Jackie's current struggles on the bigger hills, the well-worn paths, compact hills and instant scenery had been exactly what we needed right now (with certain exceptions, the smaller hills in Scotland always end up being rough going).

Still, we both had 3 days before we had to be back at work, and the weather forecast was looking perfect for camping. Would we spend more time in the Lakes or dip into the Southern Uplands on our way back north?

A fine hill indeed, although I'm slightly confused at how you two have manged to do the same route with different amounts of ascent (424 m vs 350 m). Think you need to coordinate your walk reports better

Fantastic pics! I did look out for you from High Stile, but I think you must have been on the "wrong" side of the fell