A fine Place for a summit camp

A fine Place for a summit camp

Today we were heading back north...sort of. We had to be out of our accommodation by 10am, so we said goodbye to Jackie's parents as they headed south, having been great hosts and provided us with food all week. My parents were also leaving the Lakes today to go back to Wales, so we had a picnic lunch with them in Elterwater before heading off. It had been great to see people, but now we were looking forward to some time to ourselves....so why were we heading into Ambleside on a sunny Saturday afternoon?

We had quite a few options to fill up the next 3 days - the weather looked good and we had our camping gear with us, so where next? Having driven to the Hardknott Pass yesterday, we were now less keen on heading round to Wastwater, and there was more sunshine in England than there was over in Newton Stewart, so it looked like we would try a Lakes summit camp. I had come up with a couple of possibilities which wouldn't be too difficult to reach - naturally they were hills that I hadn't been up before (not that I'm a bagger or anything

). We settled on Place Fell assuming we could find somewhere to park in Patterdale, which is why we were now driving through Ambleside.


our_route.gpx Open full screen  NB: Walkhighlands is not responsible for the accuracy of gpx files in users posts
Patterdale was completely choc-a-block unsurprisingly, but in the Patterdale Hotel carpark, a guy who was just returning to his car offered us his space...plus the remainder of his parking ticket

. Very kind of him, and we didn't hesitate to take him up on the offer. I wasn't too keen on leaving the bikes on the back of the car in such a busy spot overnight, so we decided to pedal round to the start of the ascent around half a mile away. 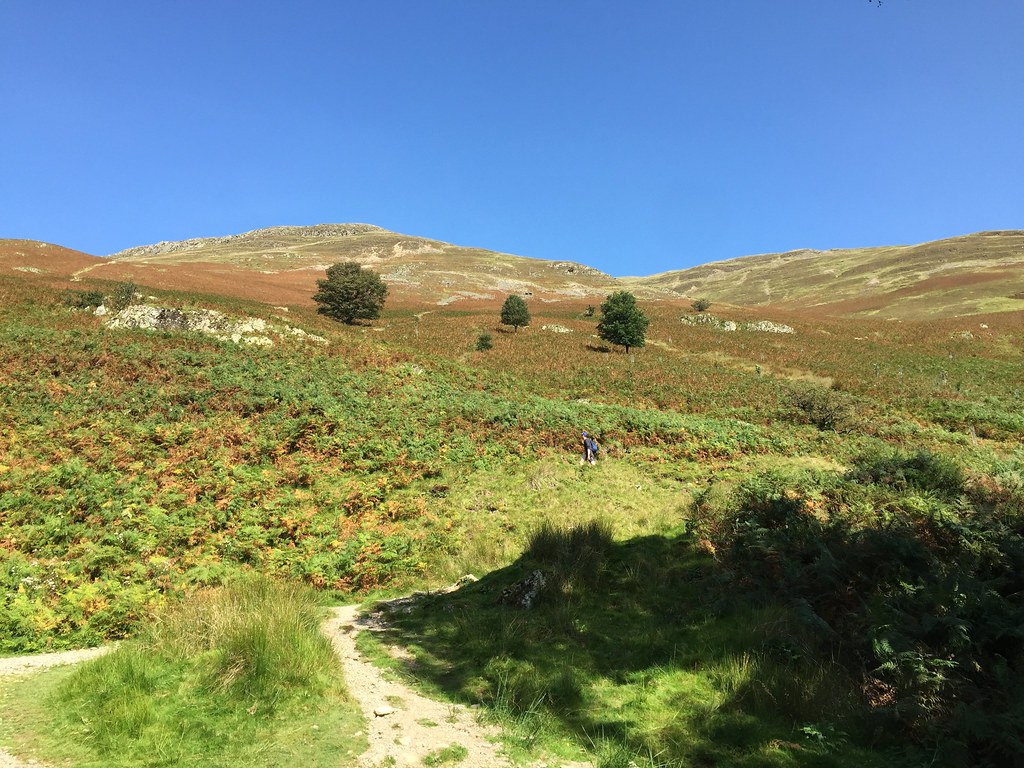 On our way up to Boredale Hause

Bikes safely secured to a fence near Side Farm, we started on the steep bridleway up to Boredale Hause. I remember this vaguely from a walk I did in my teens - we had basically walked right around Place Fell. Somehow in the 25 years since then I had never got around to actually going up it. 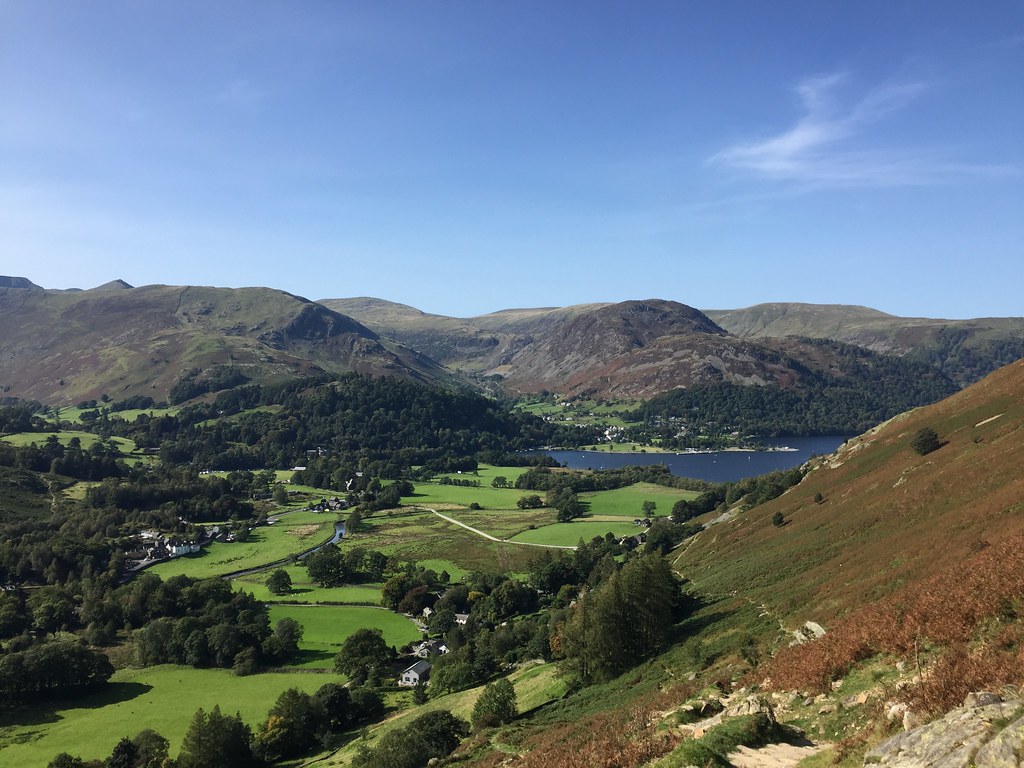 The afternoon was hot and sunny, and by the time we reached Boredale Hause, we were a bit sweaty but only halfway to the summit. The path beyond here was more substantial than I had expected, and had a steep, almost scrambly section through an eroded gully just below the summit ridge. 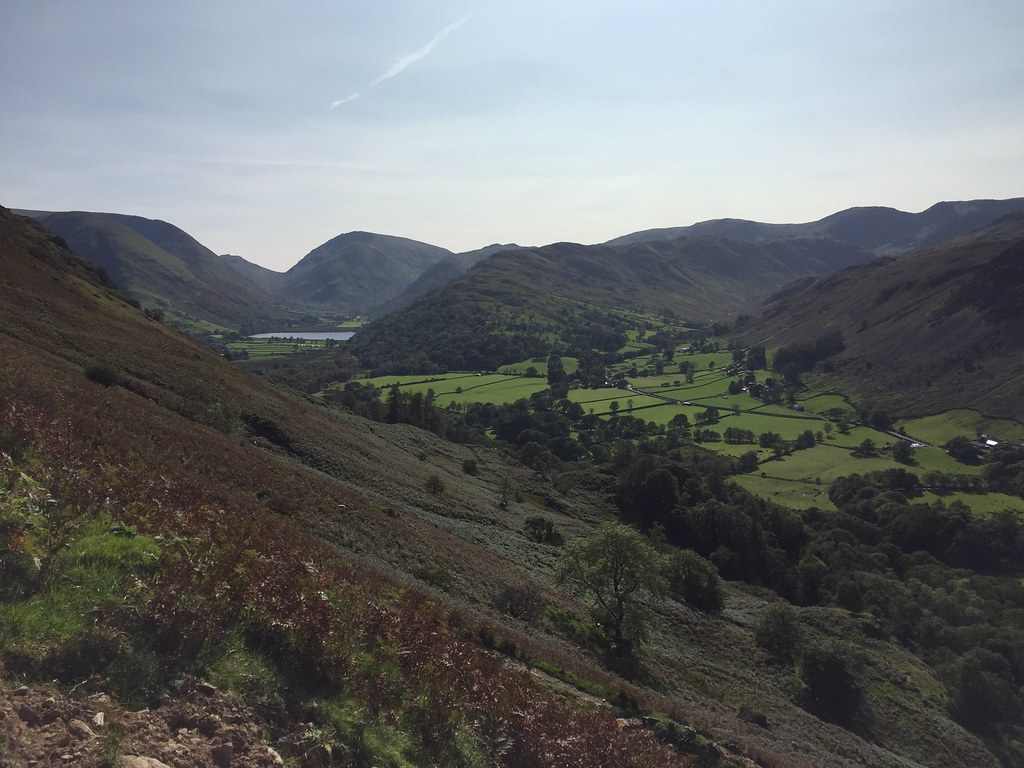 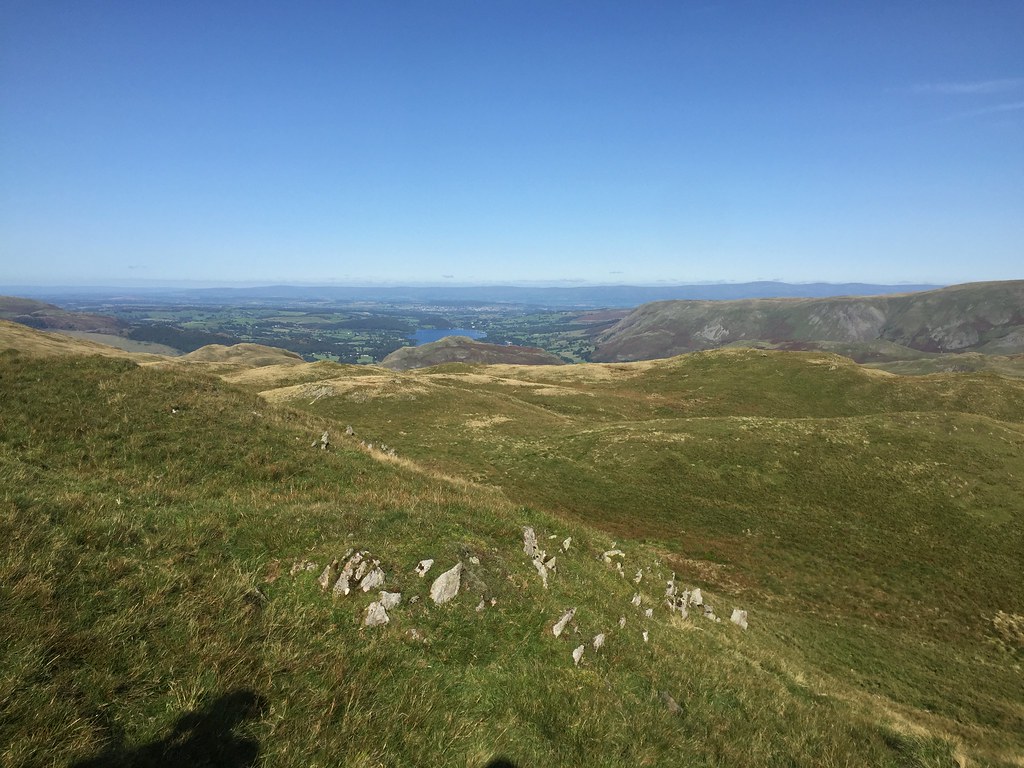 Once on Round How, the going became easier and we were almost there. I had hoped to see a little more of Ullswater from the top, but we were set back a bit too far from the edge of the plateau. 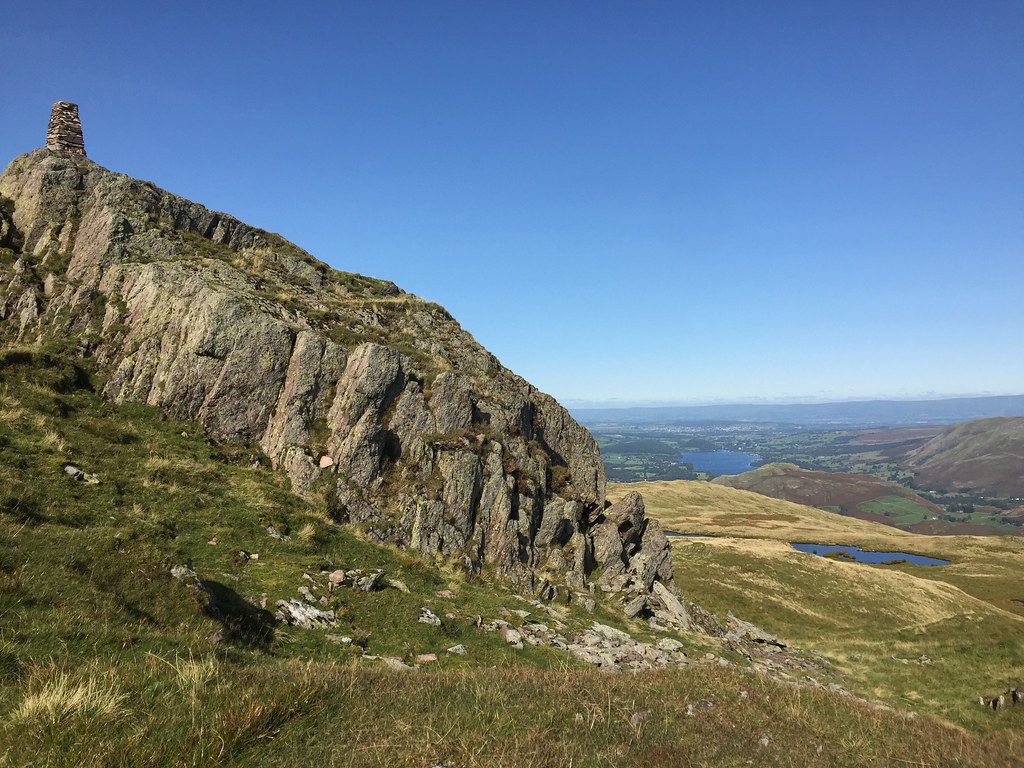 East from near the summit 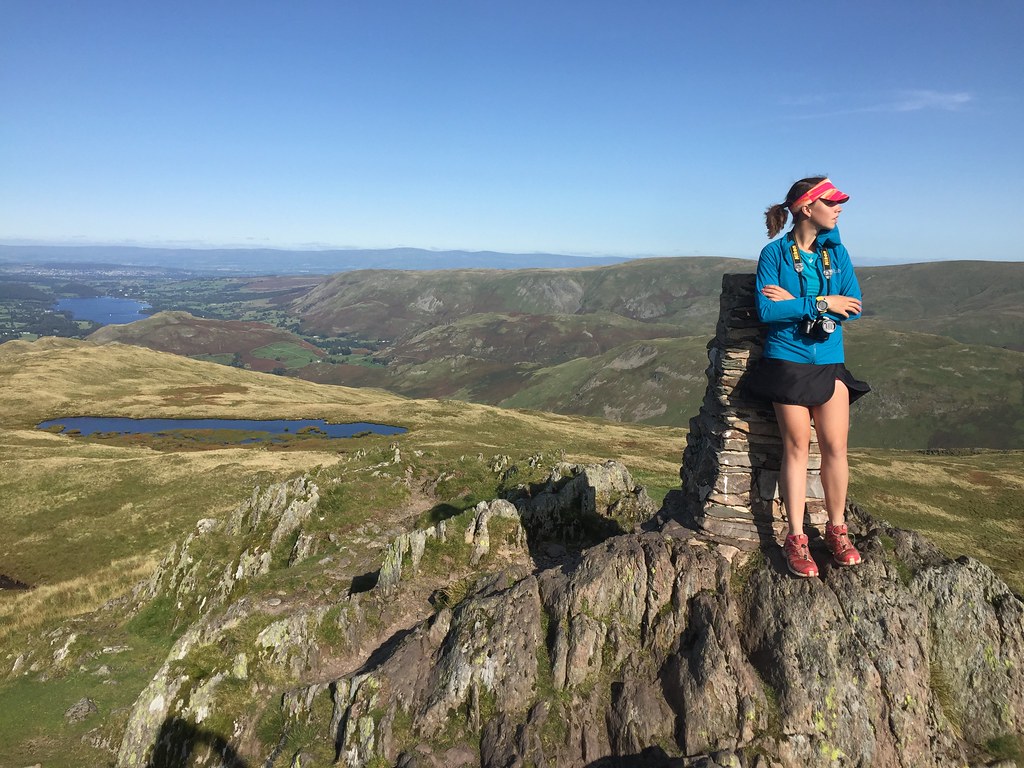 It took us a little less time to get to the top than I had thought, and much less than Jackie's estimate - in fact if wasn't even 4pm yet! Normally we would get the tent straight up, but there was quite a cold breeze coming in from the east, and the most sheltered spot was almost on the path. Instead we opted to drop down a little way towards Ullswater and have a relaxing afternoon there.

By 5:30pm, it was starting to cool down on the sheltered side of the hill and the hill was getting much quiteter - time to get the tent up. An hour or so later it was dinnertime, and it wasn't long after that until sunset. 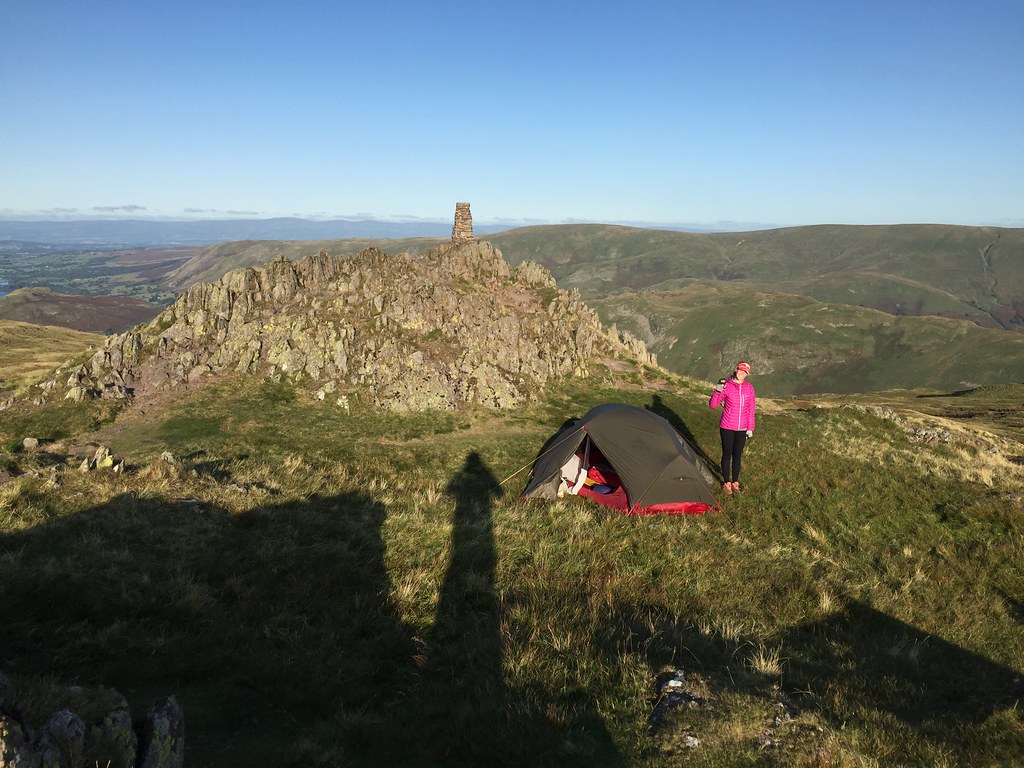 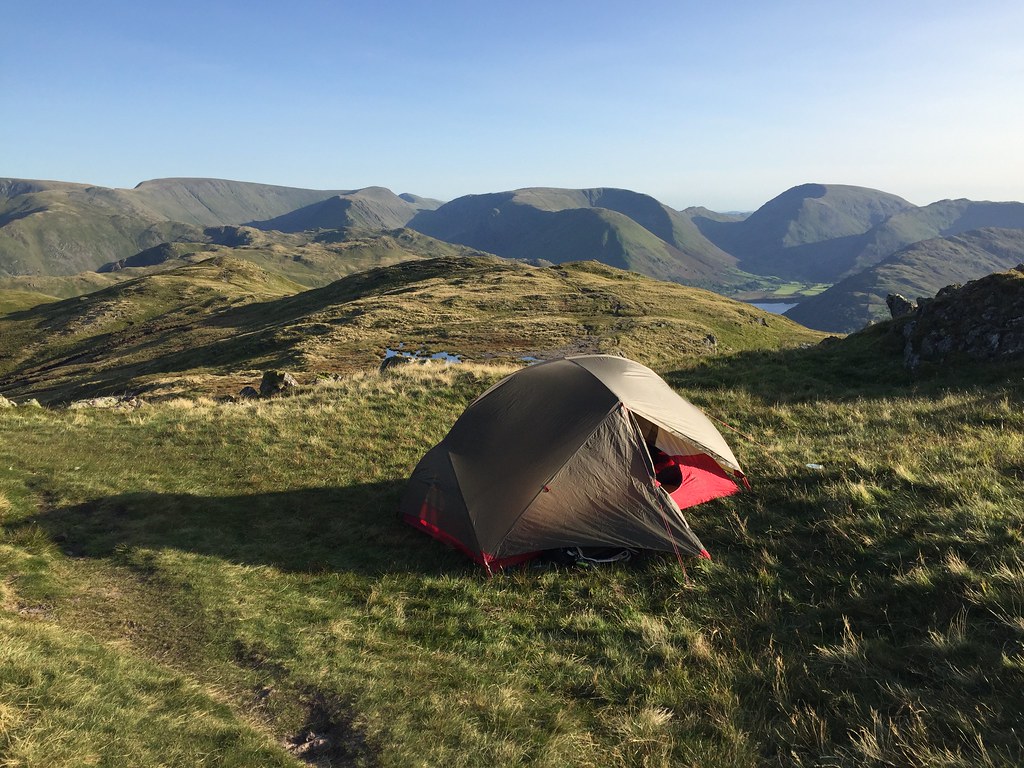 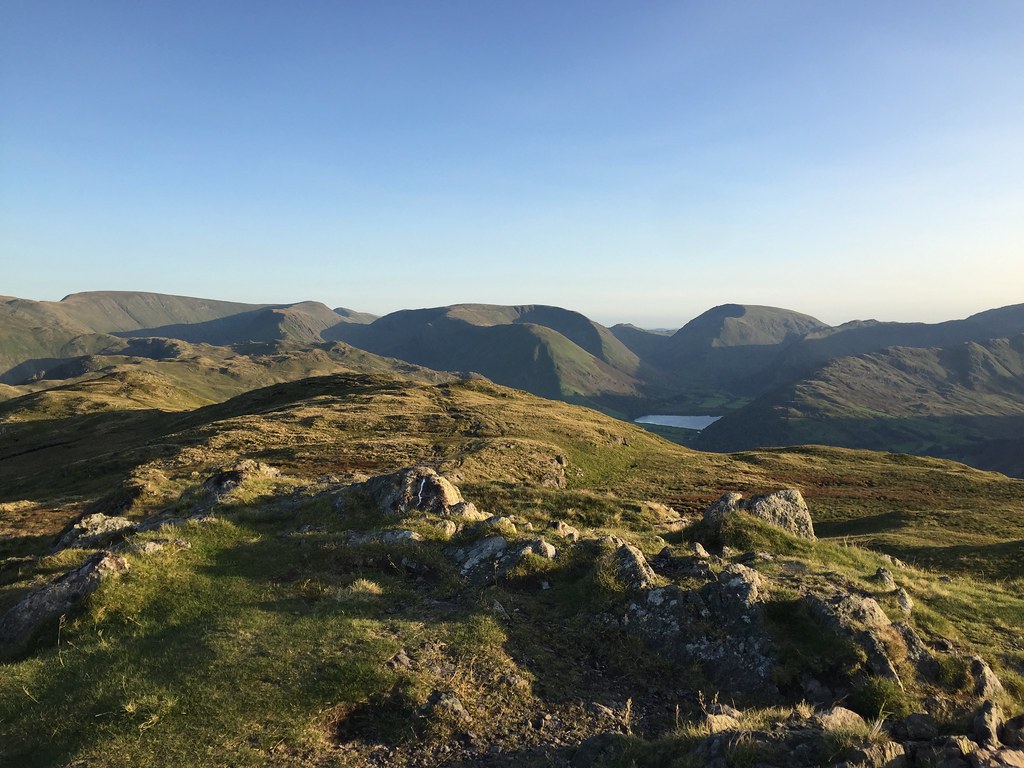 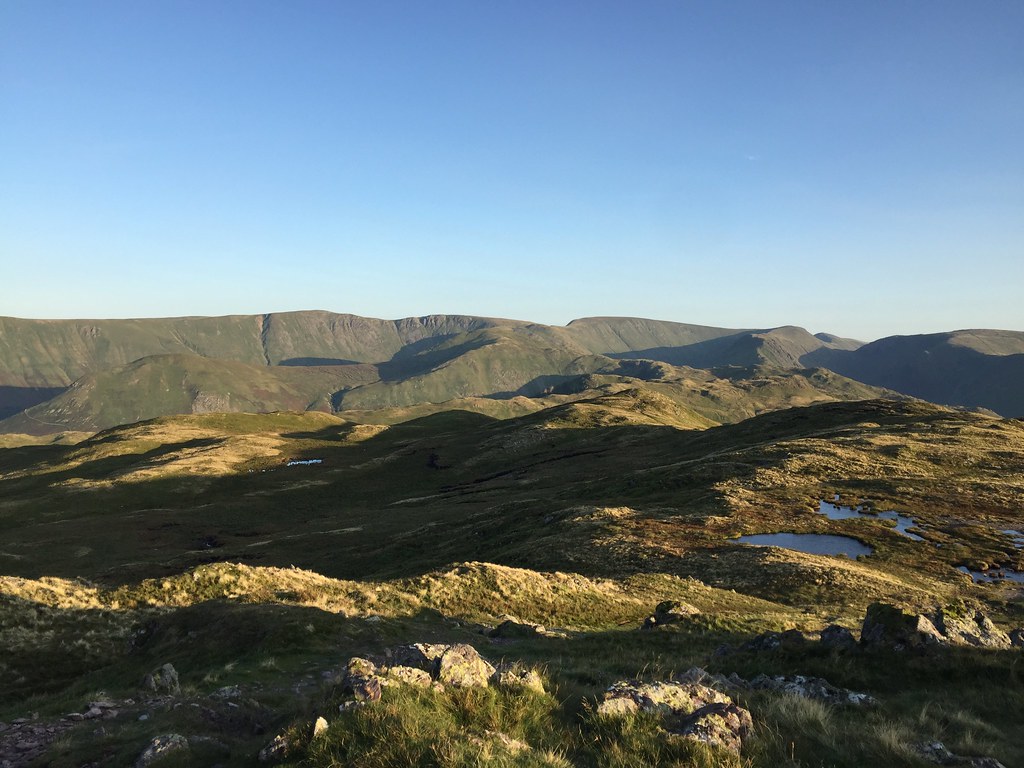 Sunset was pleasant but I knew we were too hemmed in to get a really spectacular showing. Still, after dark was impressive, with the odd car headlight visible descending the Kirkstone Pass and other torches spotted on surrounding summits. Penrith presented an orange glow to the east. 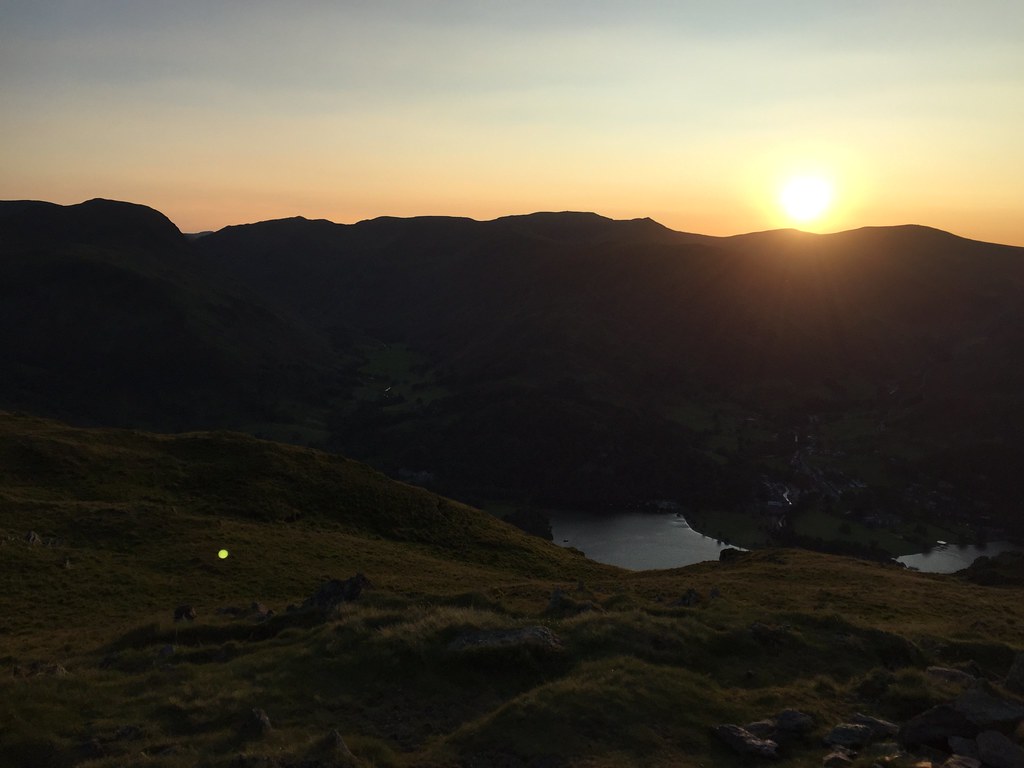 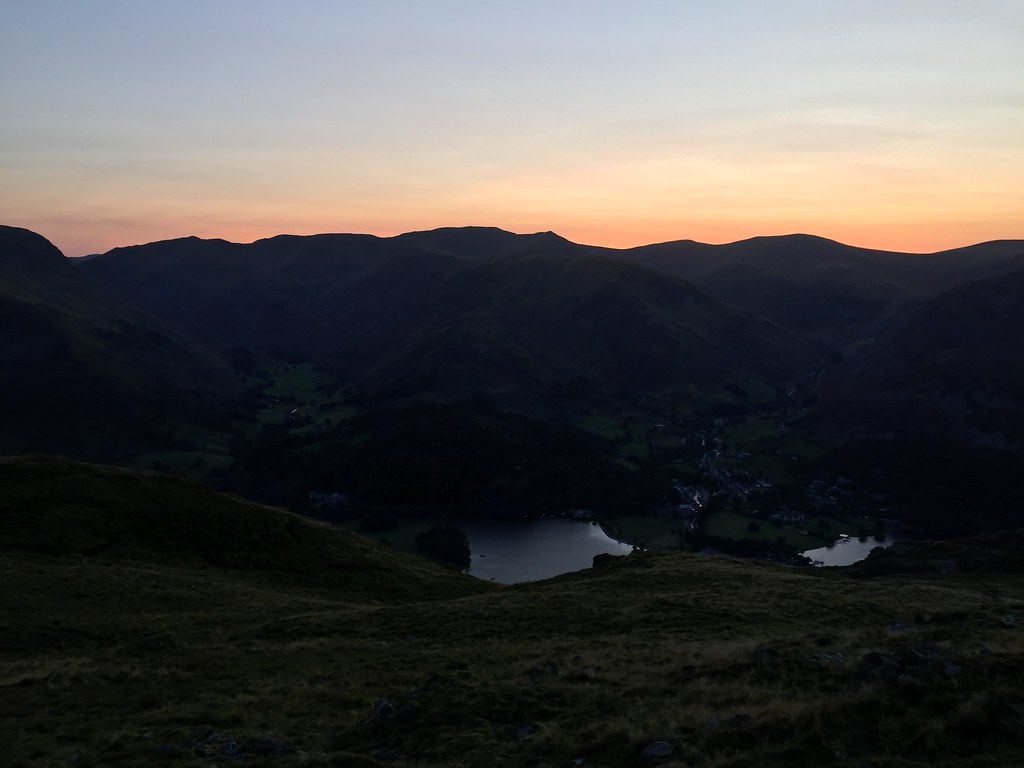 Jackie was up for sunrise, but I felt lazy and couldn't be bothered. Not a bad plan, as a potentially spectacular sunrise was scuppered by low cloud sitting over the Northern Pennines. When I did get up it was still impressive though, and by mid-morning we had spectacular views across to Helvellyn and Striding Edge. 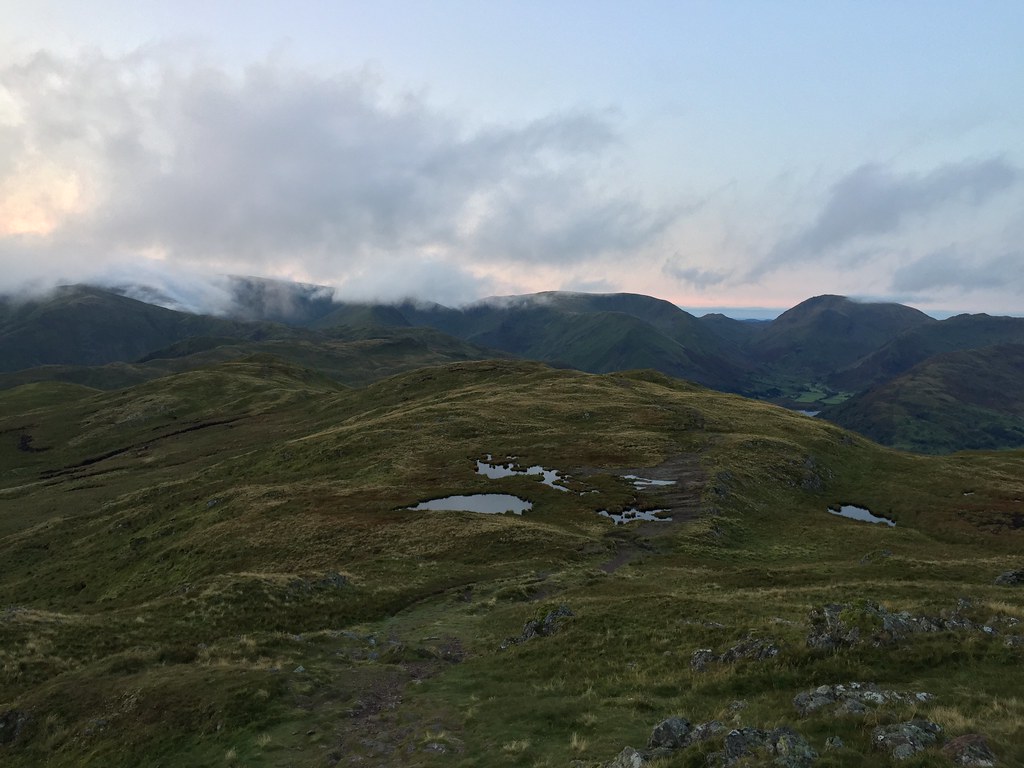 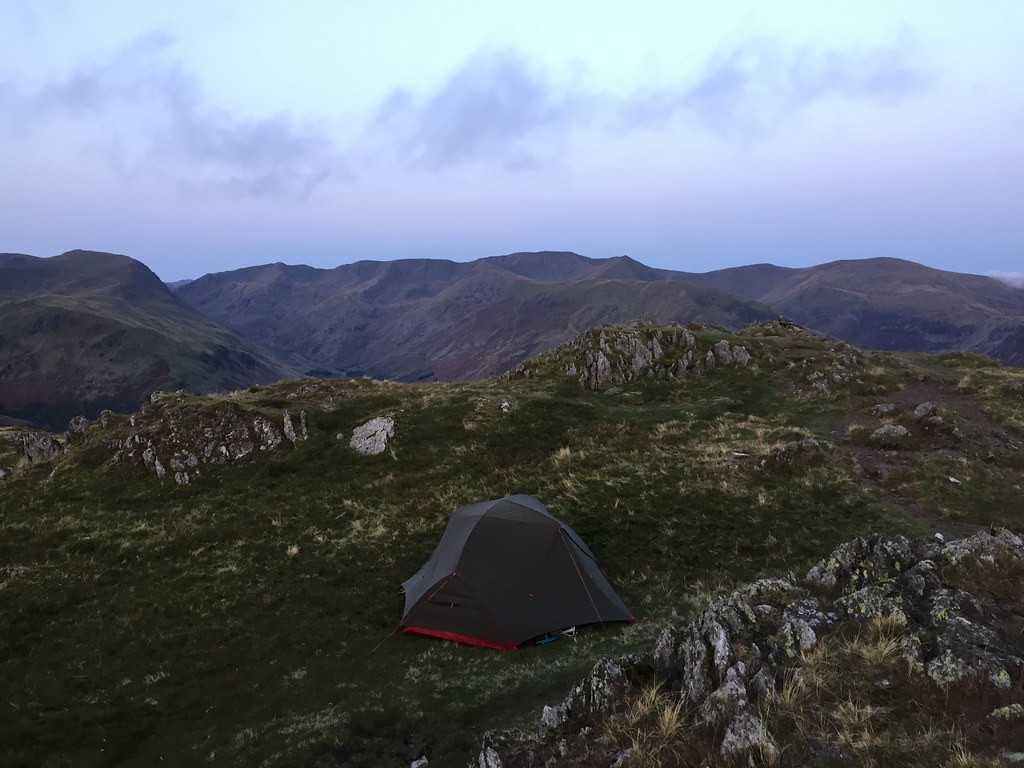 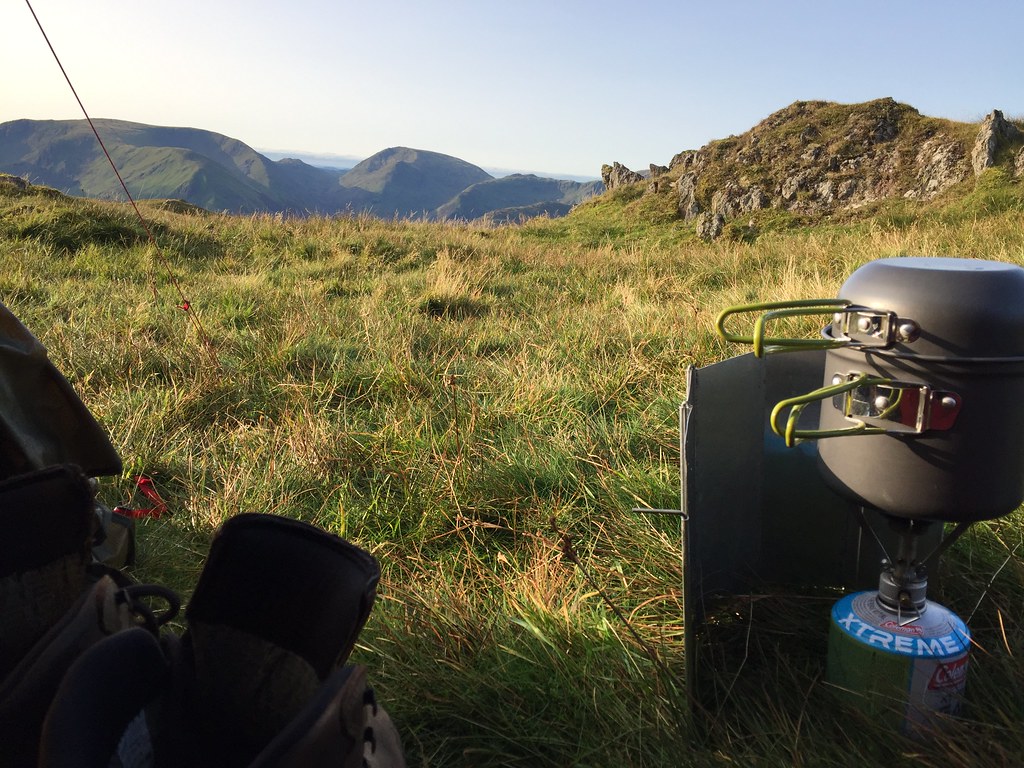 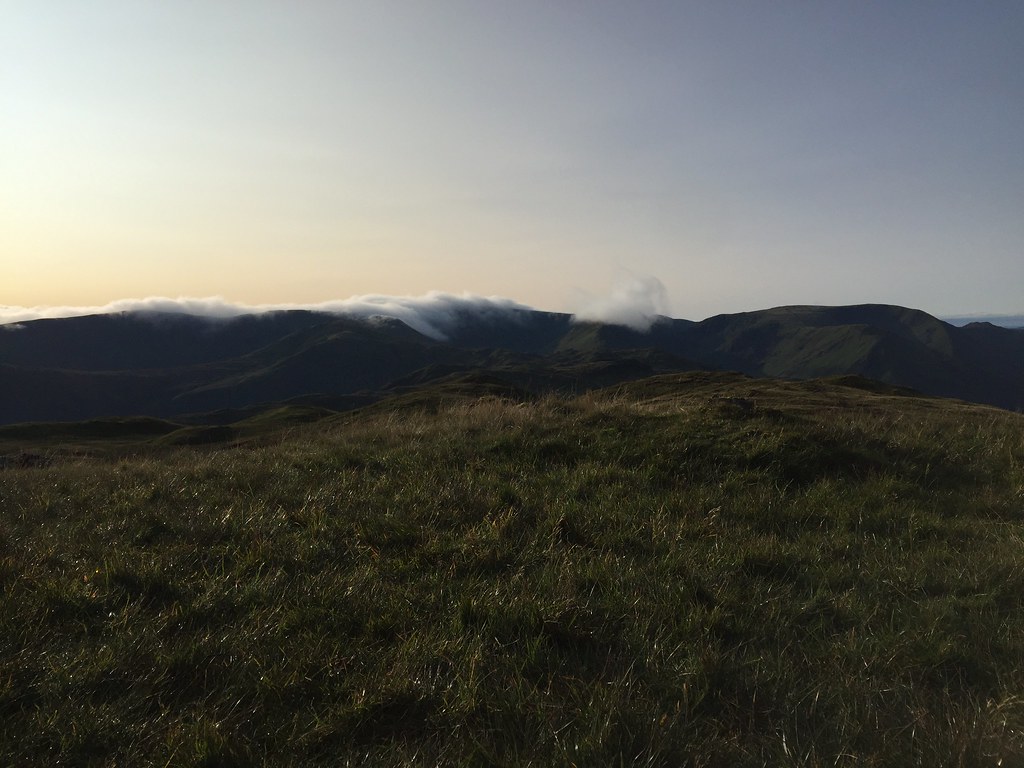 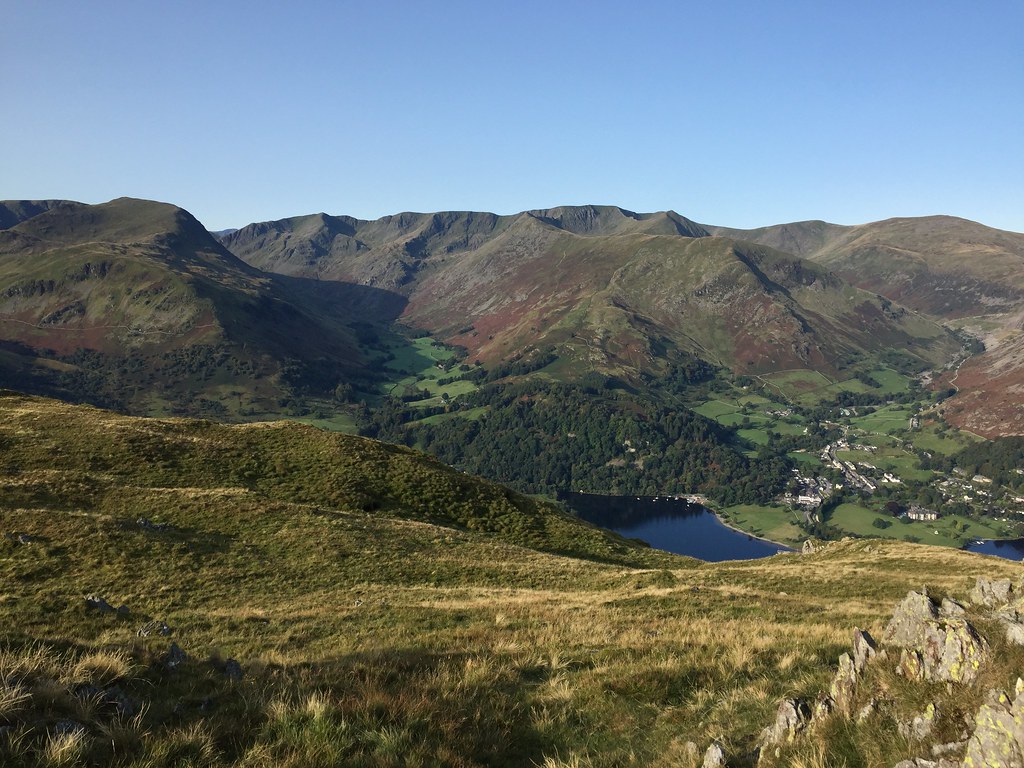 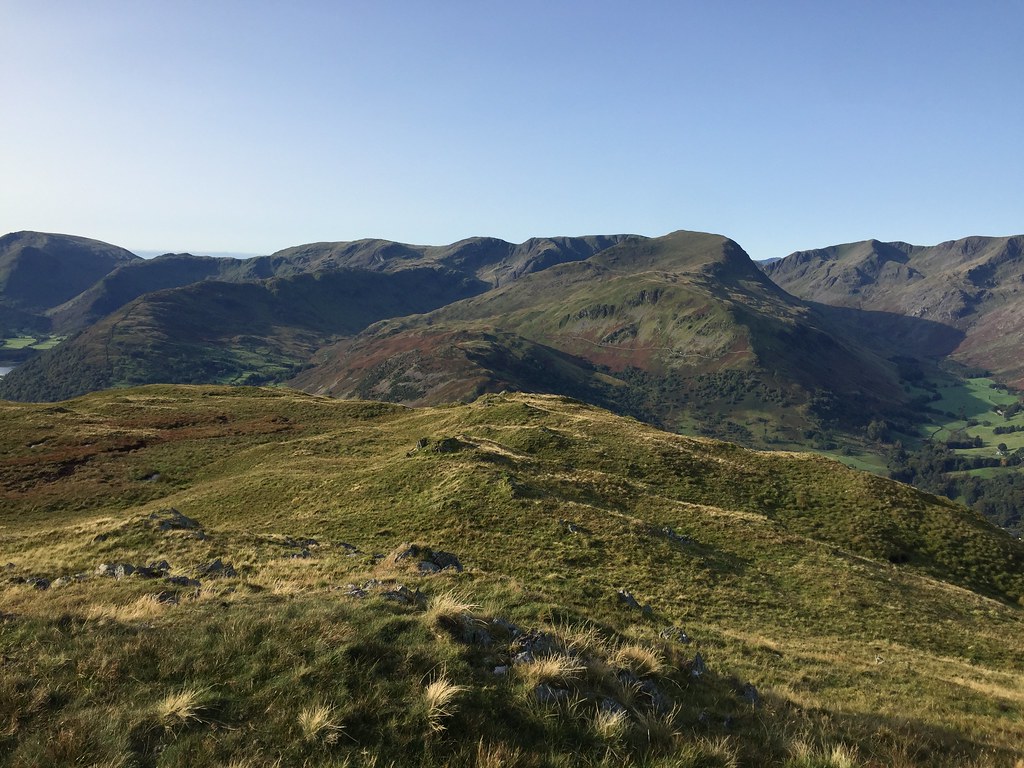 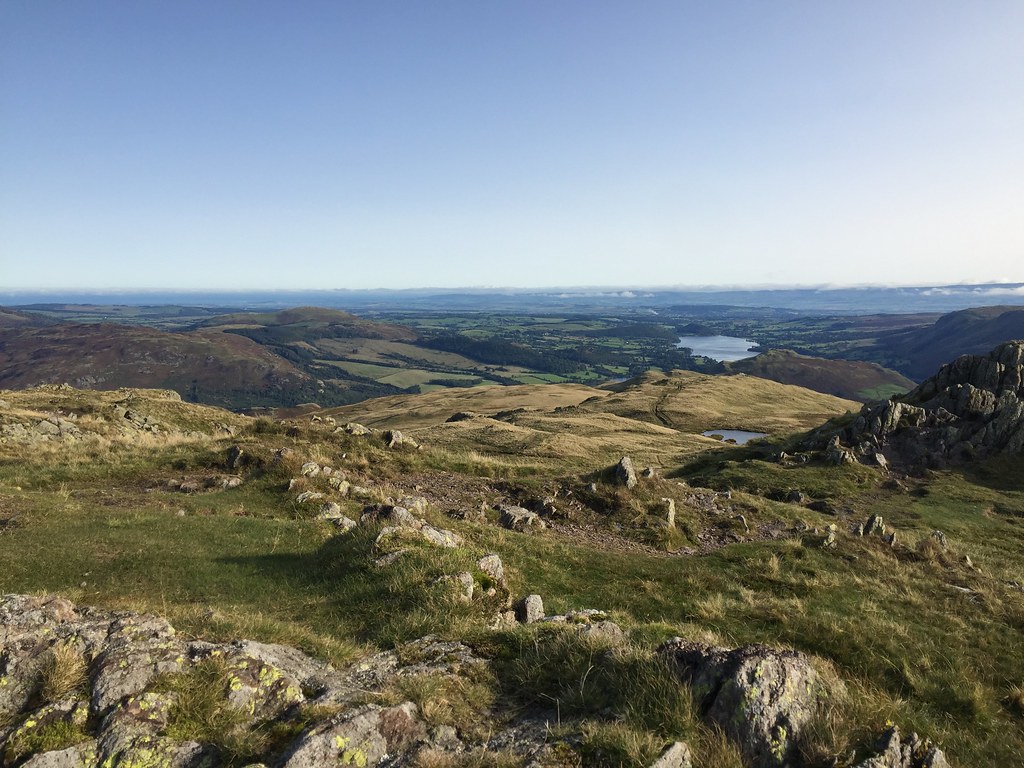 East to the end of Ullswater 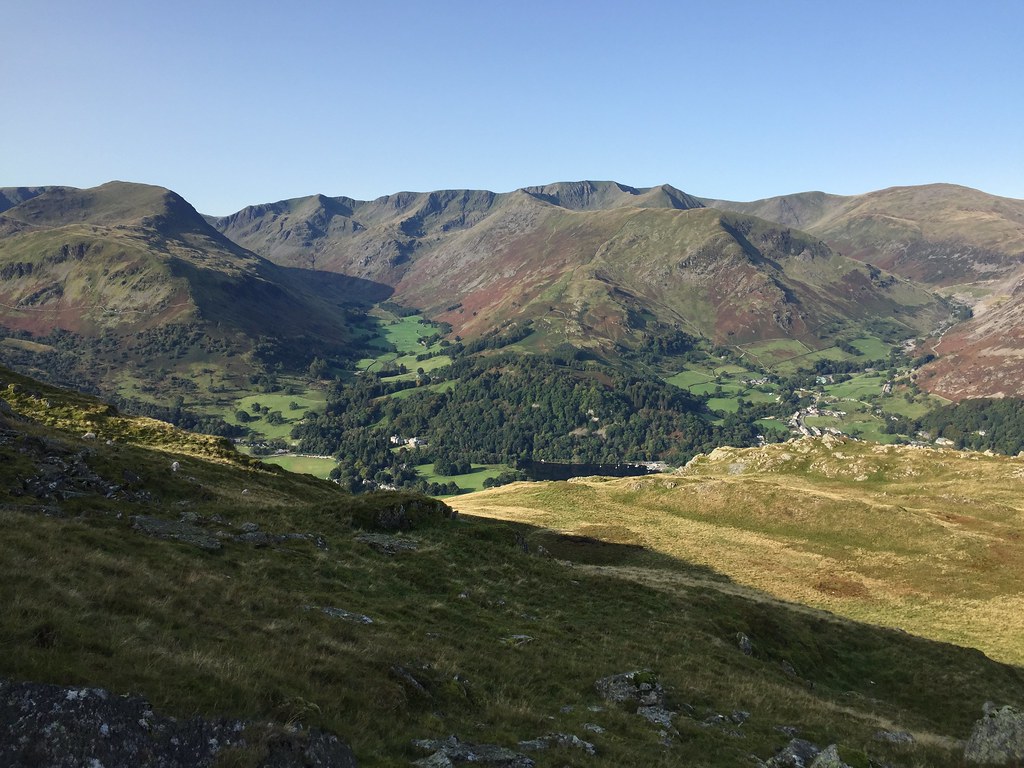 We finally got round to leaving, and decided to descend a more obscure route towards Birk Fell. This would lead us down steep slopes opposite Glenridding and end with a nice stroll along the shores of Ullswater (in theory). 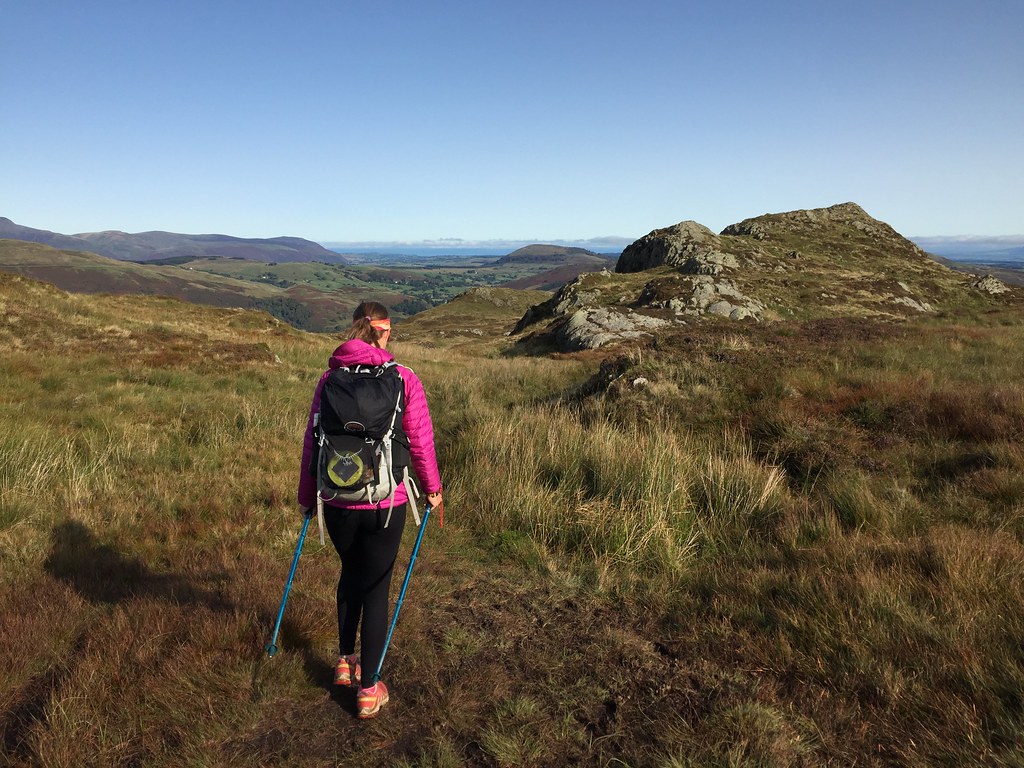 Jackie on the descent 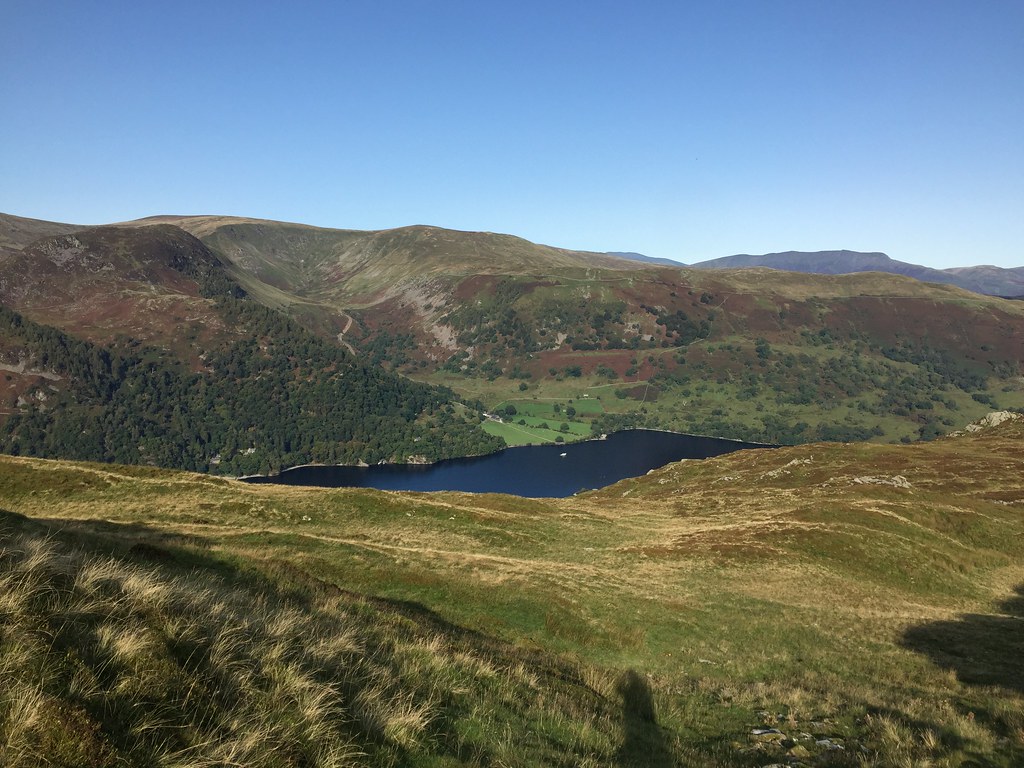 The descent was certainly impressive and the path pretty obvious. It was pretty steep in places though. Jackie was tiring a bit on the rubbly sections and was glad when it finally flattened out a bit. 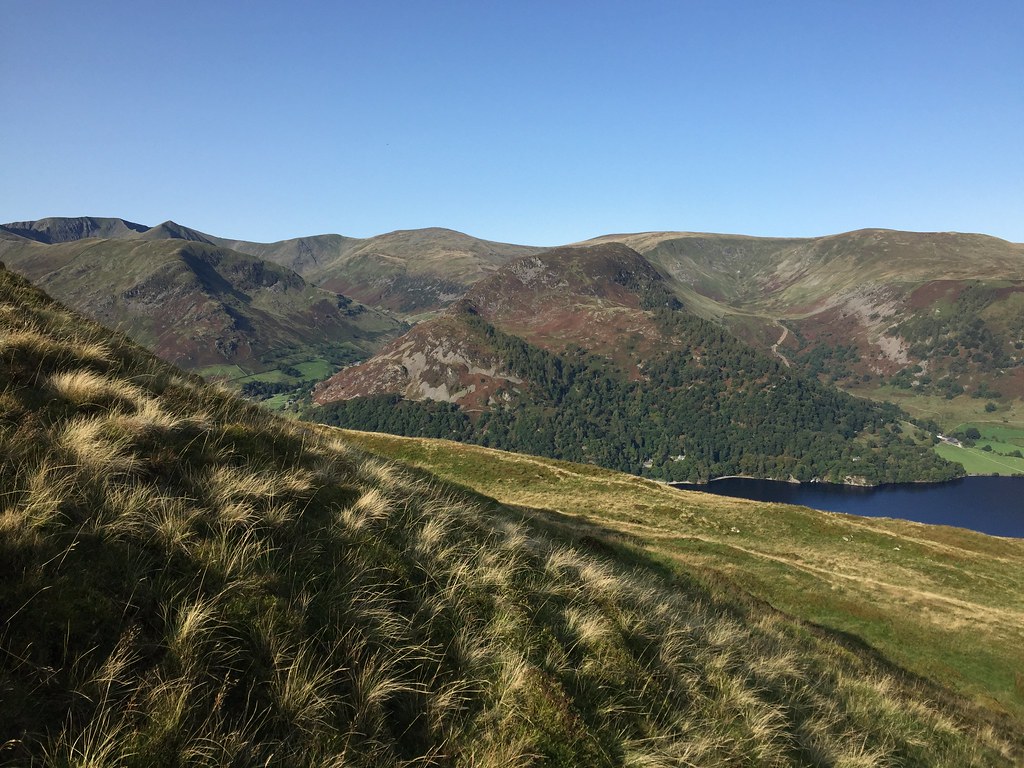 Sheffield Pike and the Dodds 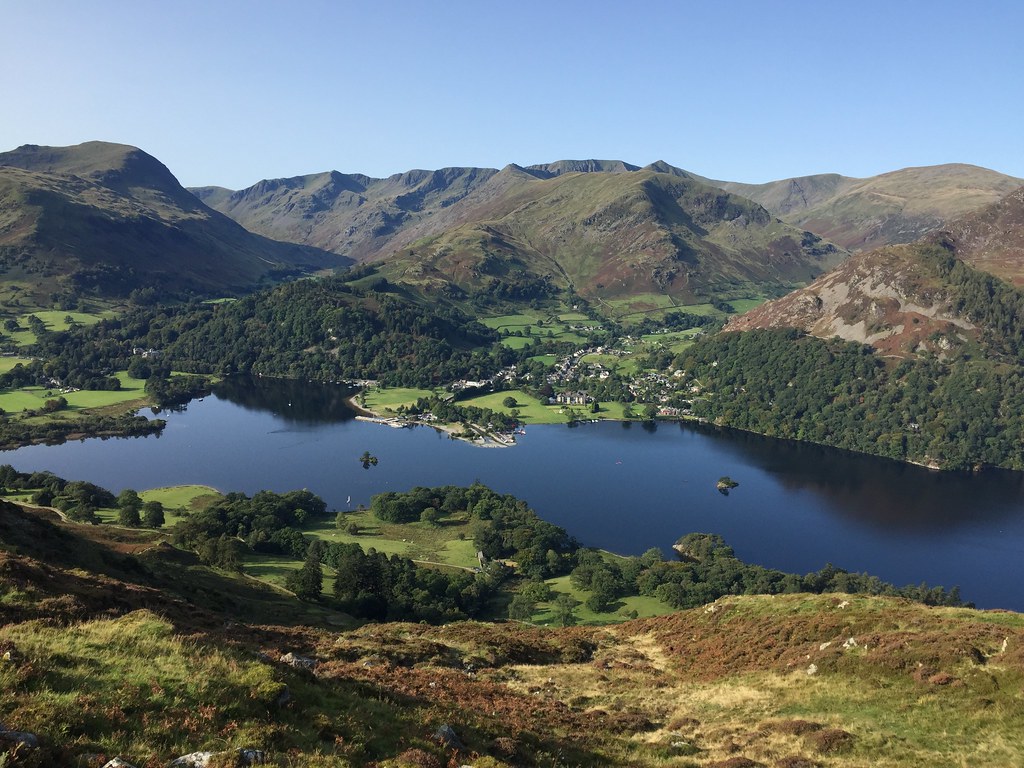 Glenridding from the descent route 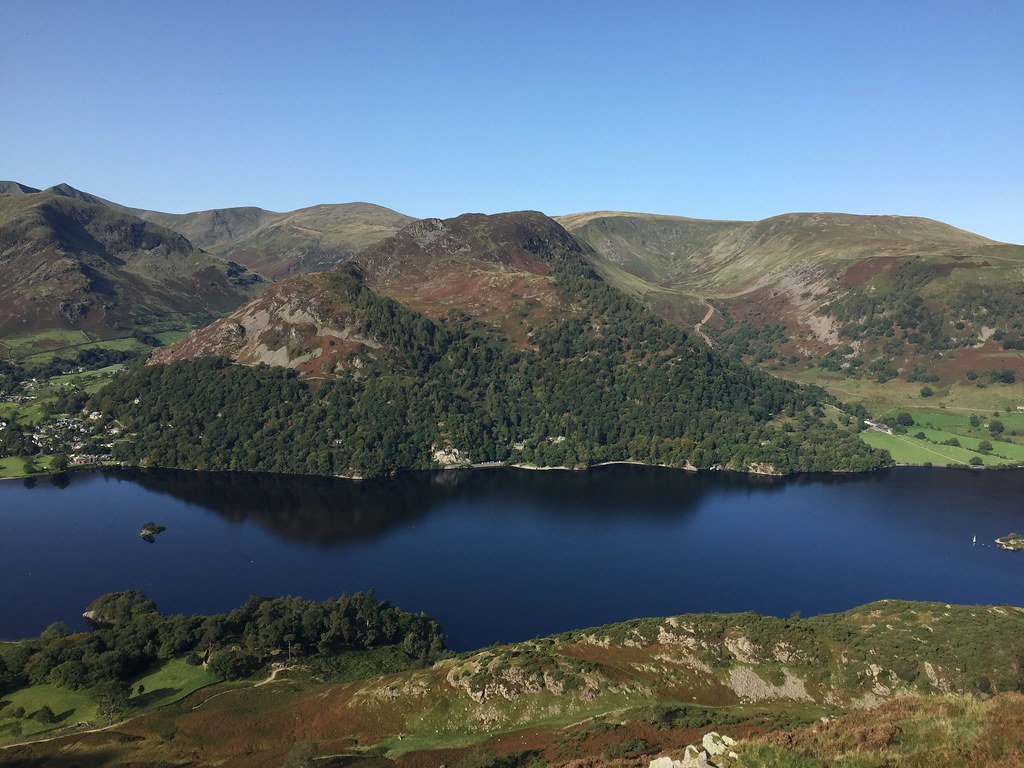 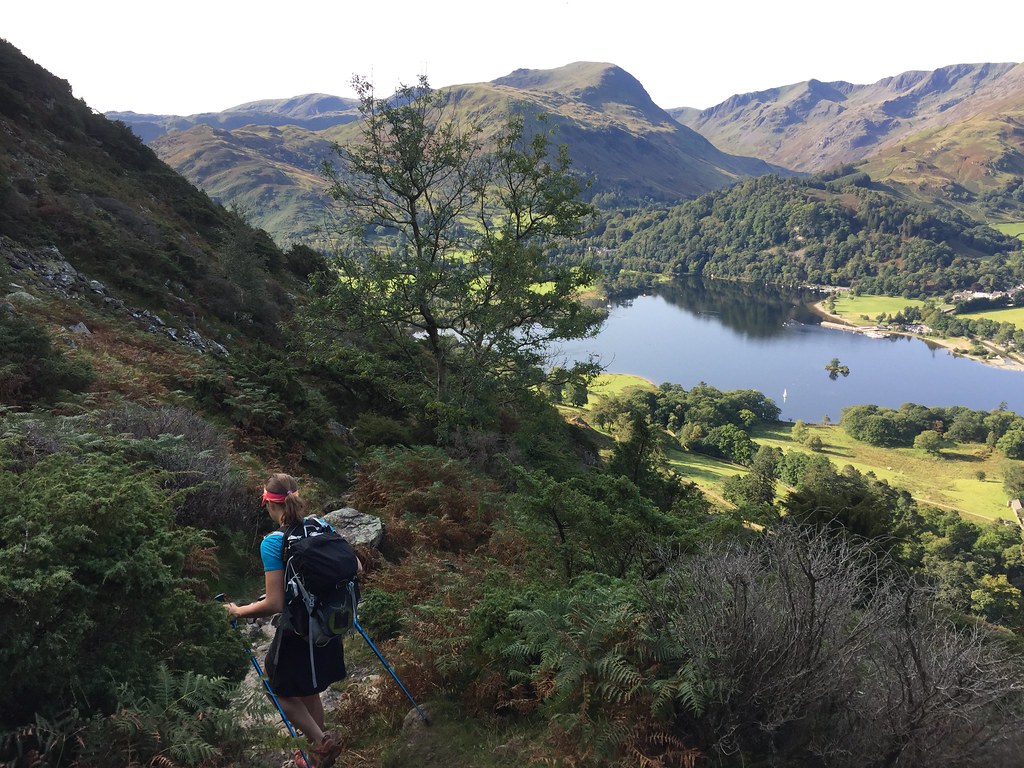 Lower down, we didn't quite drop to the lake shores, and by choosing the upper of two paths back to the bikes, I accidentally included some extra bits of ascent where the route went around old quarry workings. Still, we had a lovely morning and were back to the car before midday. 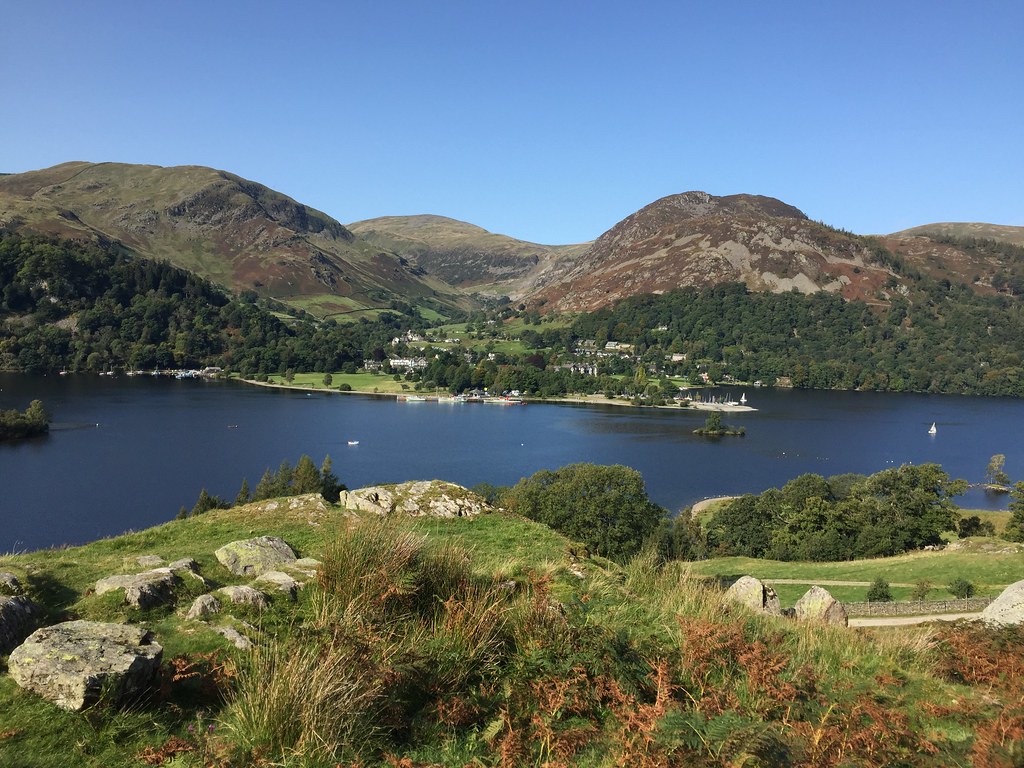 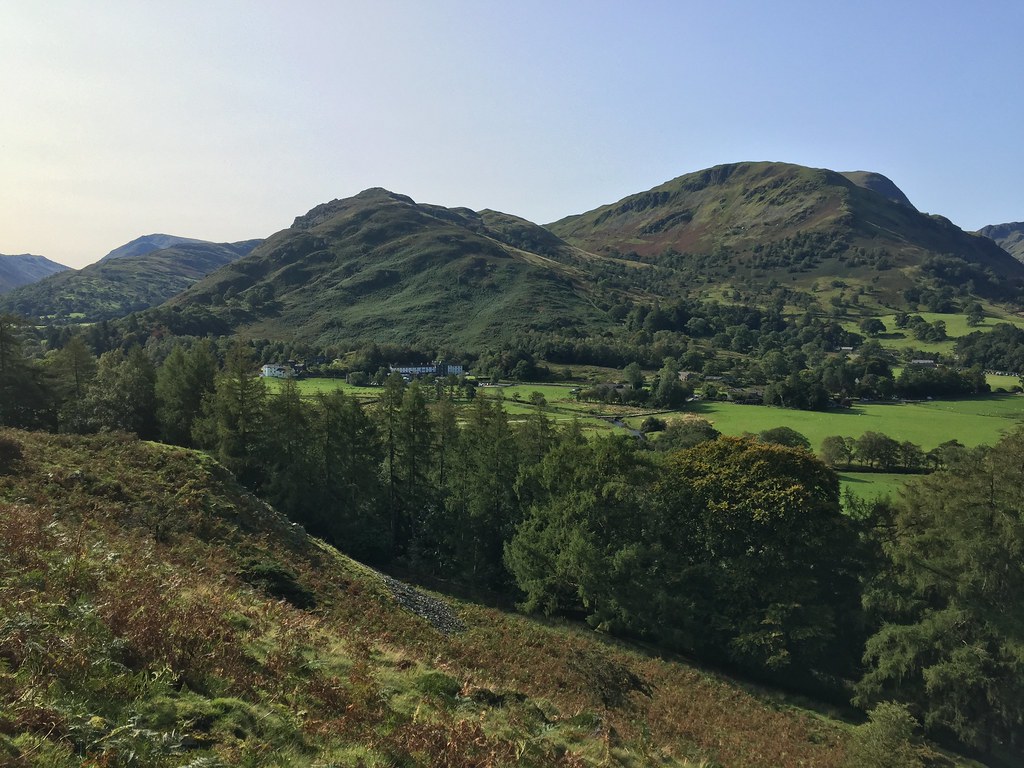 A quick stop at Patterdale Post Office for a bacon roll and coffee, and we were off to our next destination. The carparks (and any laybys or gaps on the verge) were full to bursting along Ullswater and up past Aria Force. I was hoping our next parking area would be a little less busy...