Met up with Jude from Livefortheoutdoors.com and she will be guiding the Chester walking and Rambling club on this route in April and she wanted to do a bit of re-con for that walk so I tagged along.

we left the car at Capel Curig and Grabbed the Sherpa Bus to Pen-y-Gwryd Hotel, there we planned on heading up and along the S shores of Llyn Cwmffynnon then onto the meet up with the normal accent path at the 646 top. The forecast was for low cloud and 40-50MPH gales all day but with the weather getting better as the afternoon got on. we Quickly discovered as we arrived that we were getting the afternoons weather at 9:00 and as we gained the ridge and then Glyder fawrs Summit the Views were amazing. Me on Glyder Fawr Cloud was coming and going whilst we were on the larger of the group of hills.

as we headed to the Castle in the Wind the Cloud was teasing us with views.
we headed up one of it's gullies and I was Hugging pinnacles like i was on the Aonach Eagach again. The W side of the Castle in the Wind. the other option gully (not taken) Castle in the wind E side

after the down climb we stopped to get out the wind and get some lunch
and the cloud left us so we could have some views of the hills while we ate.
a short 20 mins later we reached Glyder fach and started scrambling up to it's very unique Summit stone. Me on Glyder Fach pretty dodgy getting down from here Me on the Cantilever

Next we found the Rocks that mark the path to the start of the Bristly ridge
and I got to lay my eyes on Tryfan for the first time!!! amazing rock formations look like they fell out of the Sky now with the Big hills out of the way I still had my eye on two more Hewits before Capel Curig
and we now came off of rock and onto Boggy Moorland with the cloud pretty much staying and the forcasted 40-50 MPH winds catching up to us. At least we got the tricky stuff out of the way before wind picked and the Clouds came in. passing the Miners track junction we continued along the ridge to try and find Foel Goch fighting the wind it really was turning miserable now and I stopped taking pics and just wanted out of the wind. next we headed to the two tops of Gallt Yr Ogof. A bit of route finding involved as they aren't right on the normal path and vis was rubbish but Jude is really up to speed with her Navigation so we found them no Bother. we followed the fence line down along the various Bumps to Capel Curig and the Car Park after the 441 Bump we were below the Cloud and we could get some views down into the Valley and to capel curig and more importantly that annoying wind went away, spent the rest of the descent eating and strolling back down to car park. Capel Curig from End of ridge

Thanks for reading and we'll see ya next week!!!!!

Great report and pics. Good weather for that one, though I bet it was chilly on the tops.
Looks like a great ridge walk I'll have to put on my list.

Great report and pics - thanks for posting, have to say...... that see-saw looked rubbish 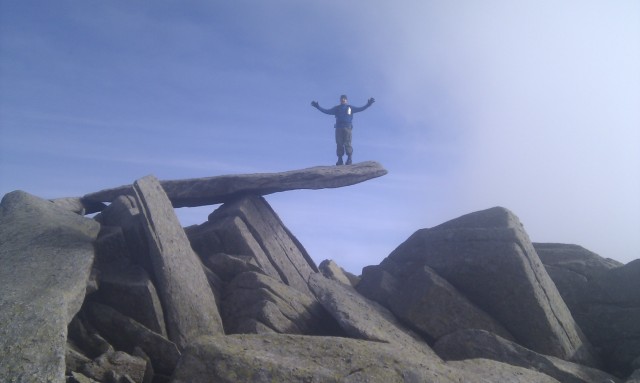 A great report there..lovely snaps of the Tryfan...did get a cuppa in the Pinnacle cafe??thats a good cafe..with a shop & Joe Browns behind is also worth a visit, the staff in those shops are top dollar!!!

we did get a cuppa there! MY boss says his Uncle owns the place,

prob head back there on Wed Eilidir Fawr then Carnedd Filiast then back long to Y garn for wed I think 4 more Hewits for me.

Brilliant stuff and lovely pics, these are just great hills aren't they?

I too was surprised at the Glyder Fach summit stone. A case of sliding down to get off it, it was wet and with the polish from many bums I went quicker than planned!

Mac i did those hills about 4 years ago i started at the YHA by Idwal cottage walked up Y-garn headed NW over Foel-goch, around to Elidir Fawr SE to Mynydd Perfedd,N onto Carnedd Fililast E to the road for gentle walk back to the car,very pleasant..