Another little visit to the Howgills and a repeat of a route we did last year this time including Hunthoof Pike.

so we decided not to go too far, we just wanted to get out and enjoy the peace and quiet of the Northern Howgills, take our time and immerse ourselves in the surroundings.

We set off from home early just to make sure we could get parked without difficulty, as it turned out we were the only people about at 08:15 when we arrived.

We had clear blue skies and the slightest breeze which made it almost perfect, we got the boots on and were off by 08:30. 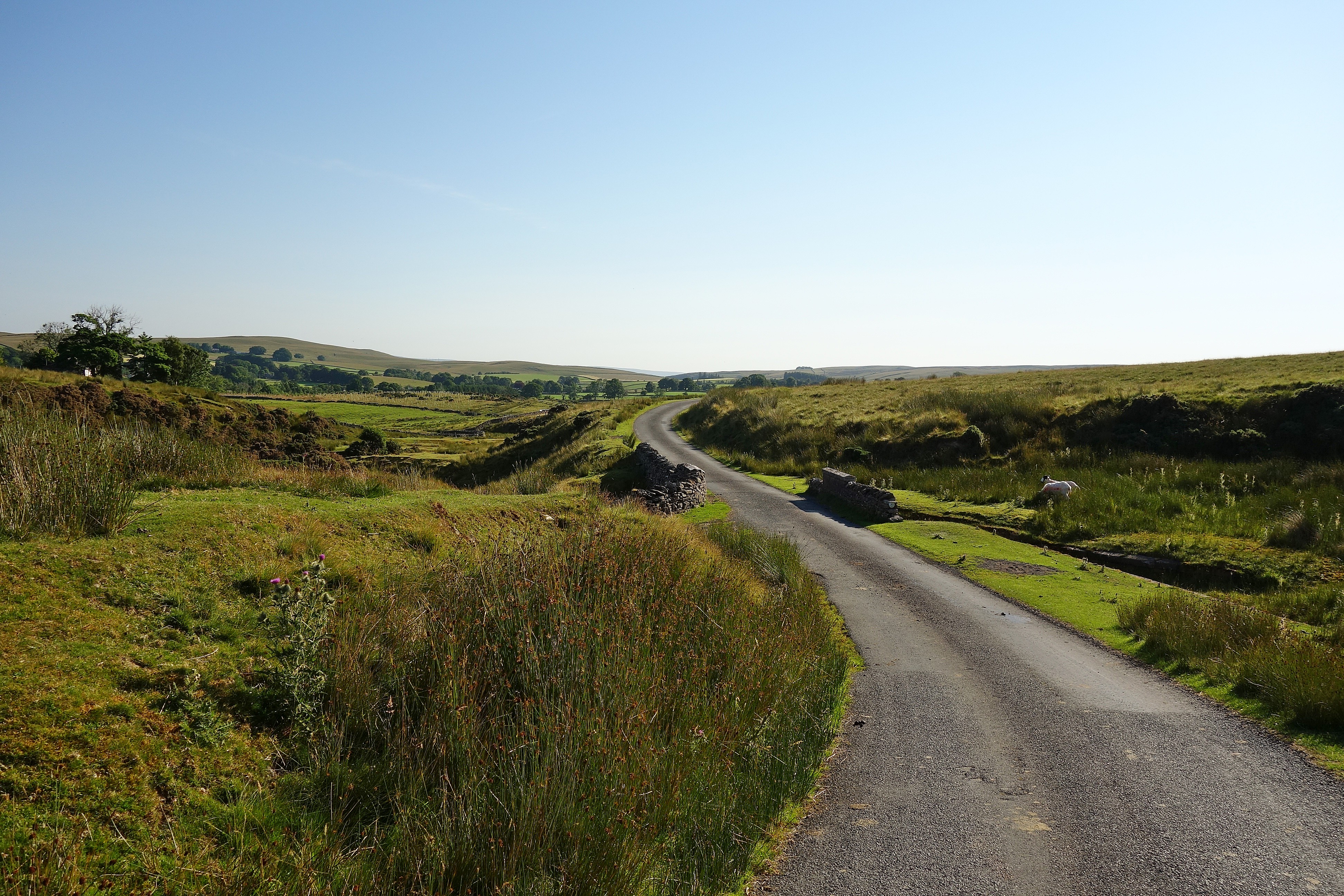 The start of the track up Green Bell is sign posted, it's easy to follow but does tend to become a bit vague around the bits that could be soggy, no threat of that today

It's a very gentle ascent to start with which was probably for the best considering how warm it was, not that we were complaining, it's rare to get these sort of conditions

so we took it nice and steady.

The views are good. 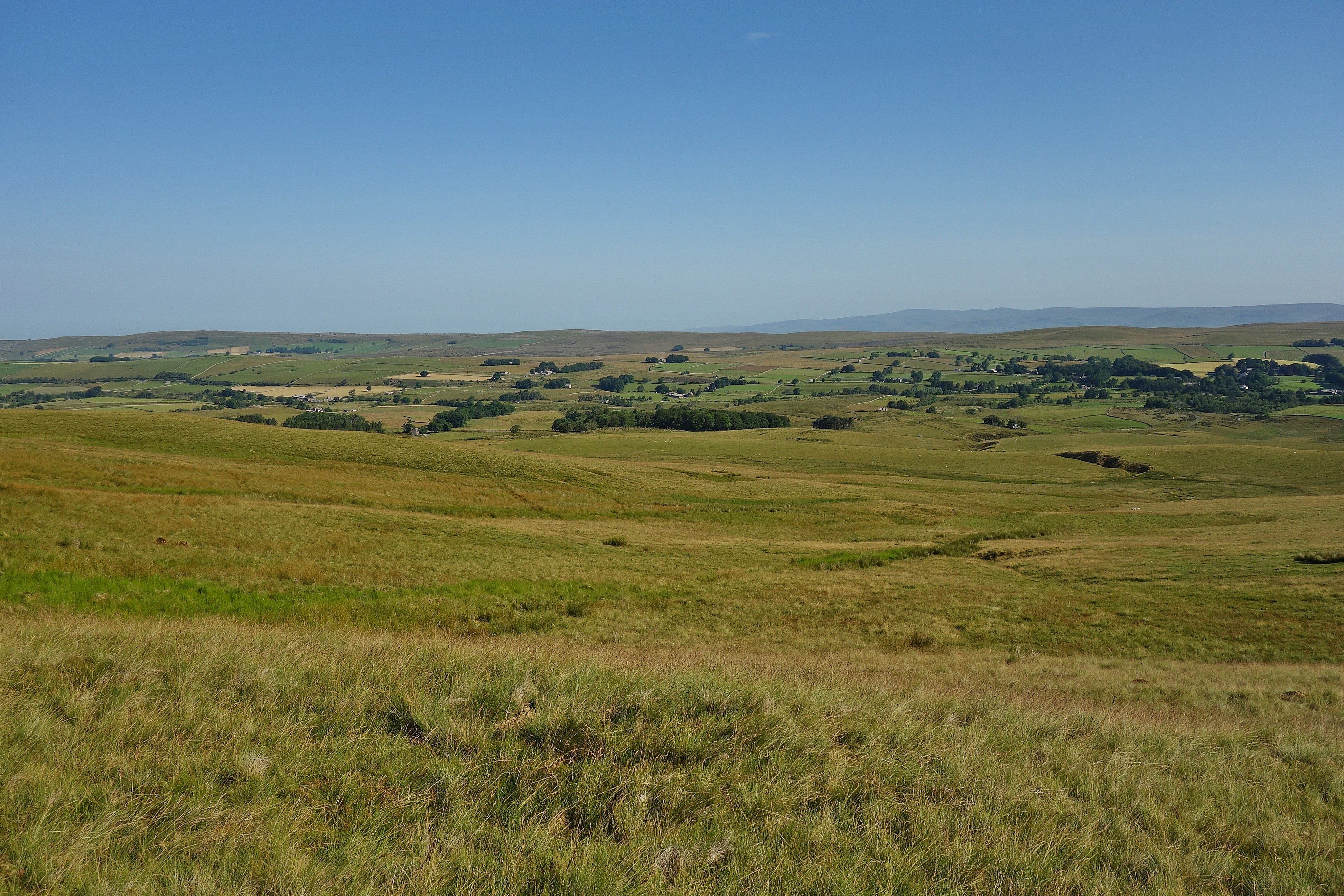 There were a few sheep around that had escaped shearing, I've heard that it's not good for them, especially so late on in the year, shearing starts around the end of May/beginning of June any later they can get "fly strike" and with such thick fleeces it must be uncomfortable for the poor things in the heat 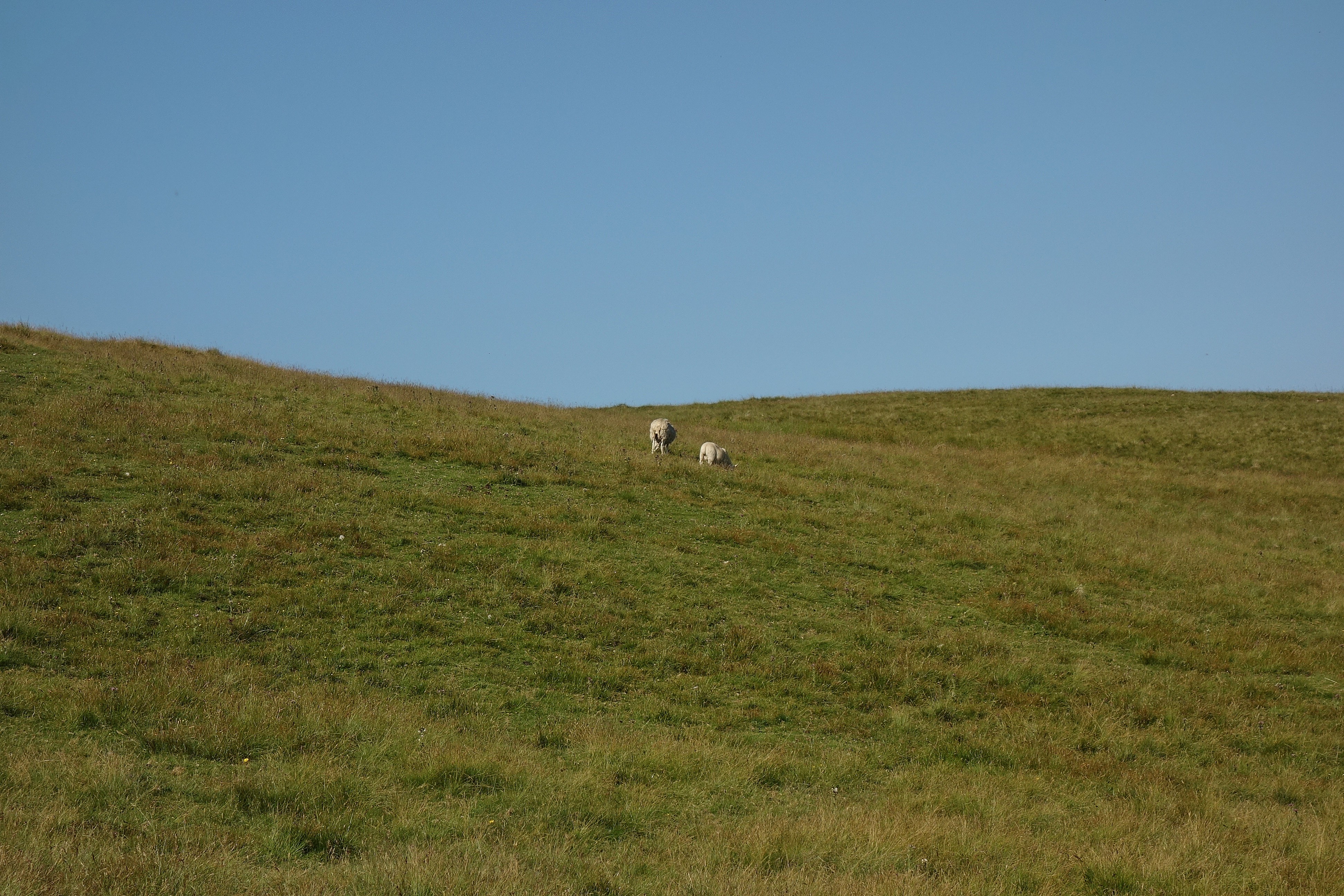 We wandered off track to do Hunthoof Pike, that was fun, especially over the tussocks, we were wobbling all over the place just like Weebles

The views from the cairn were worth it. 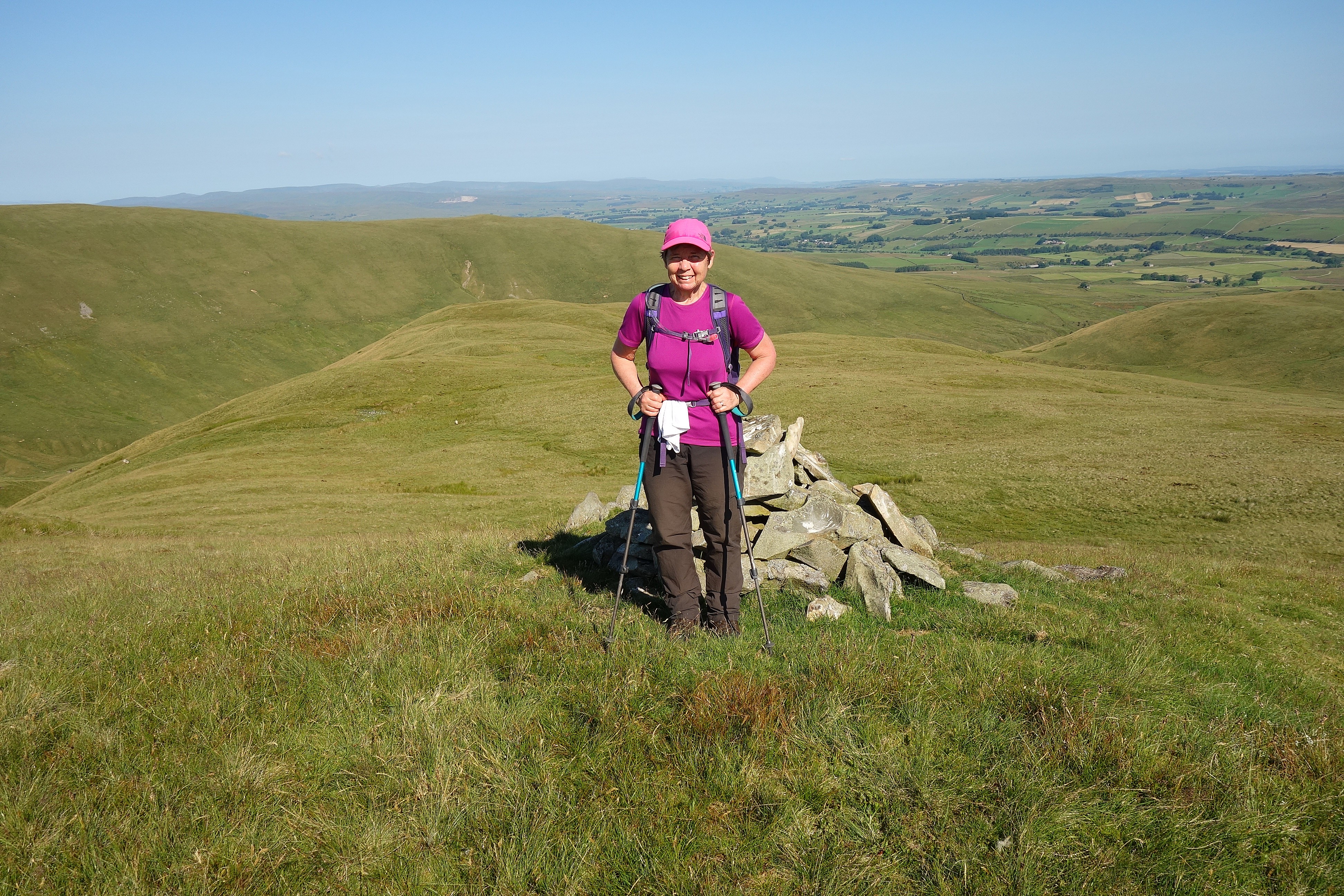 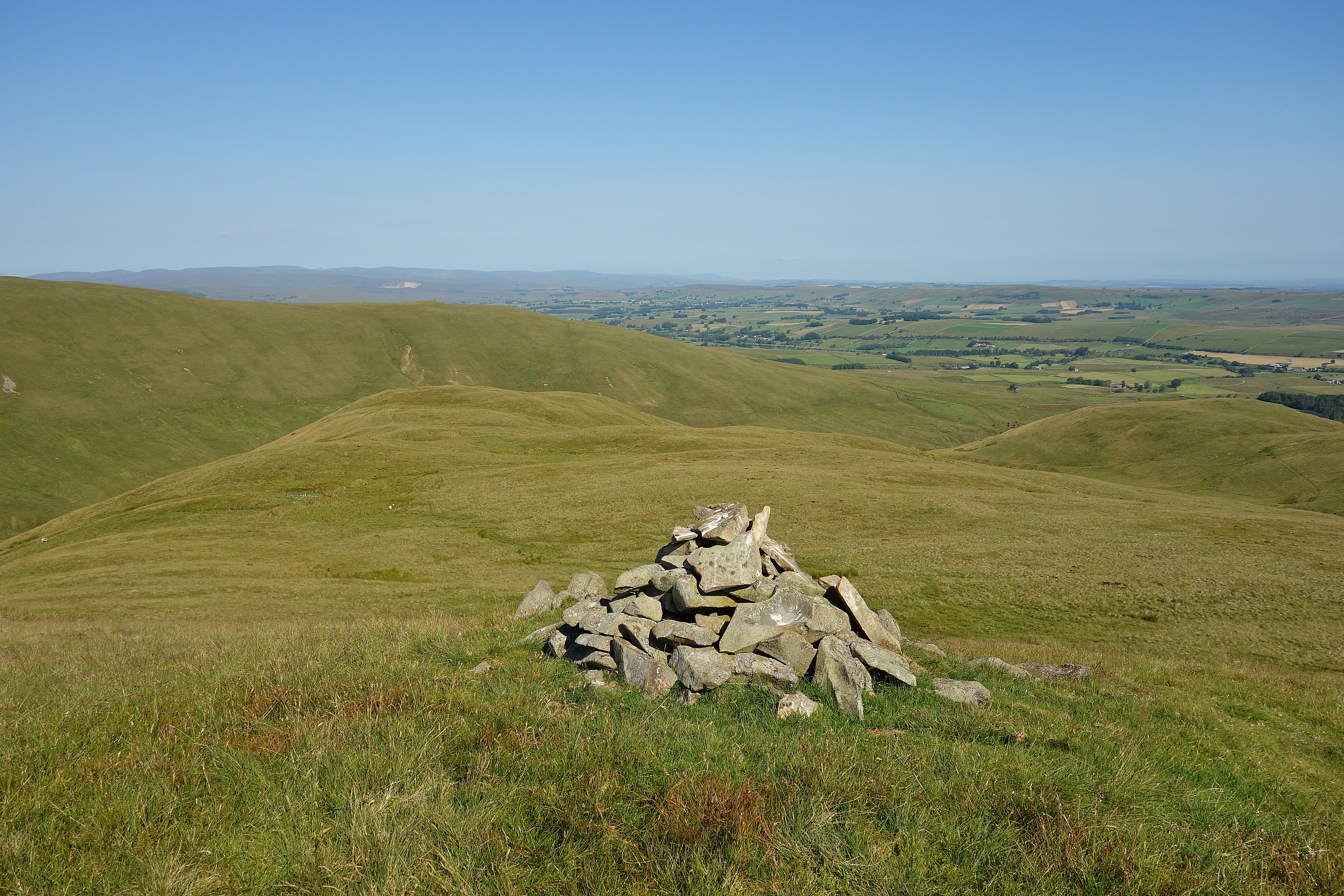 We set off from the cairn to regain the track and were soon on the summit of Green Bell. 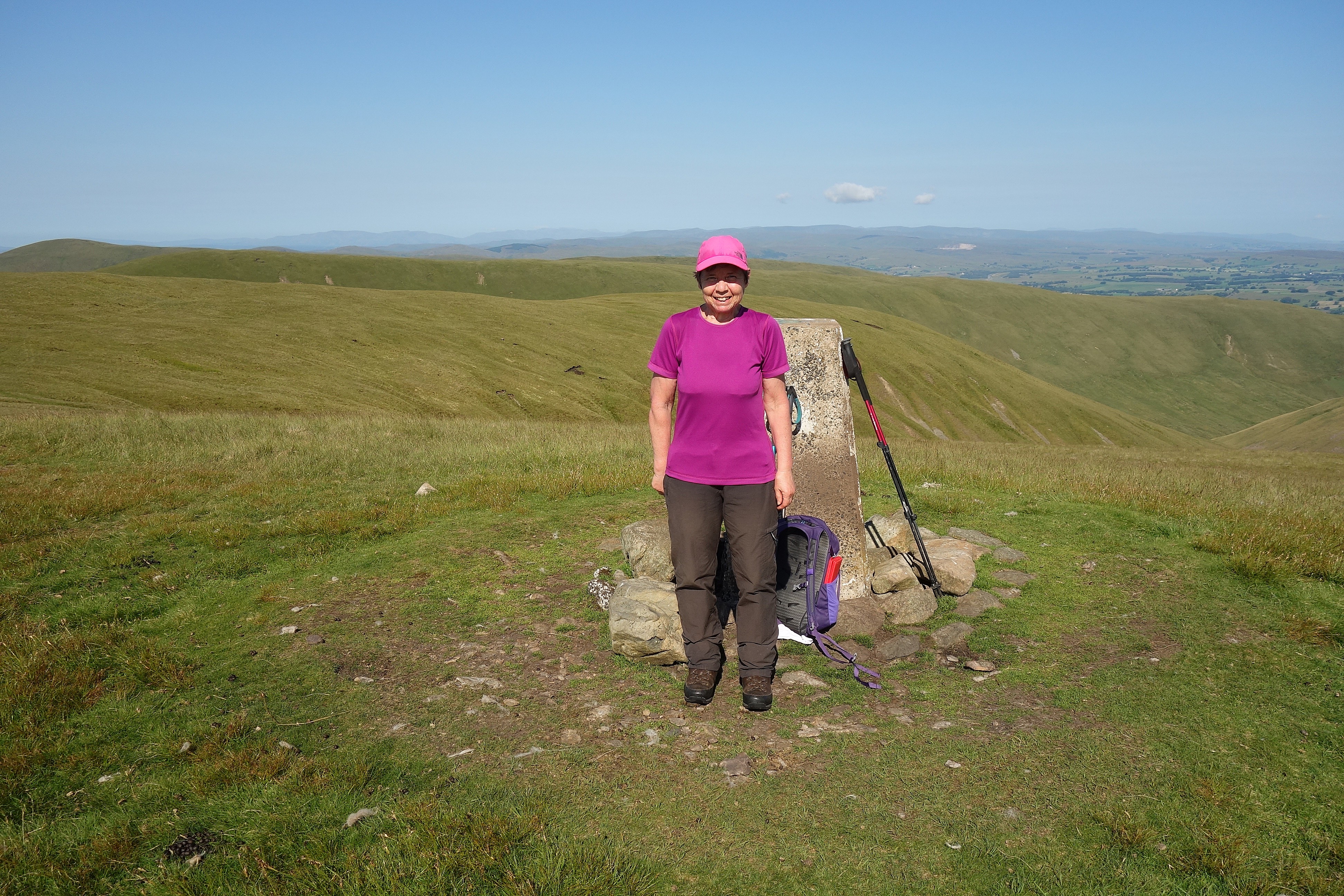 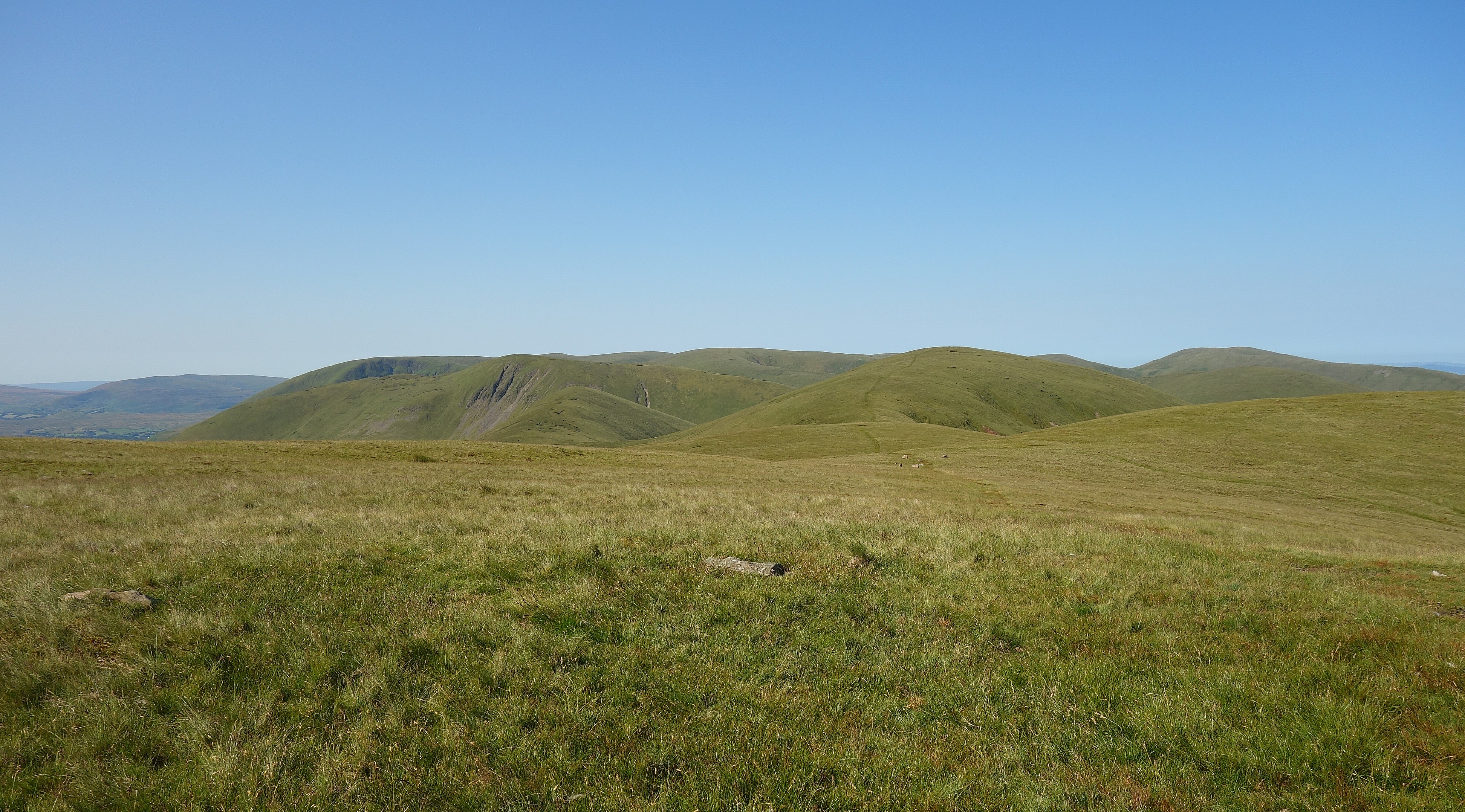 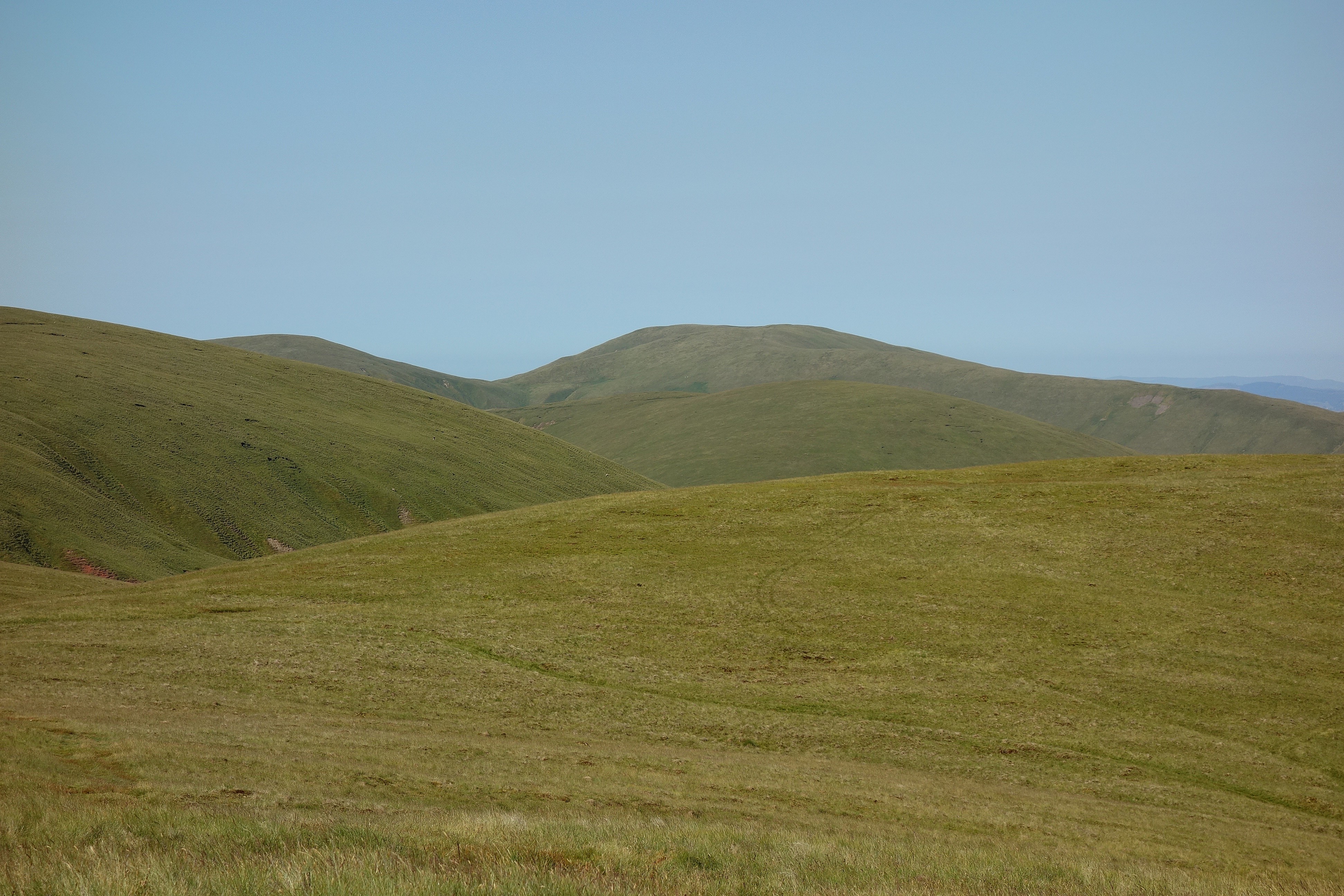 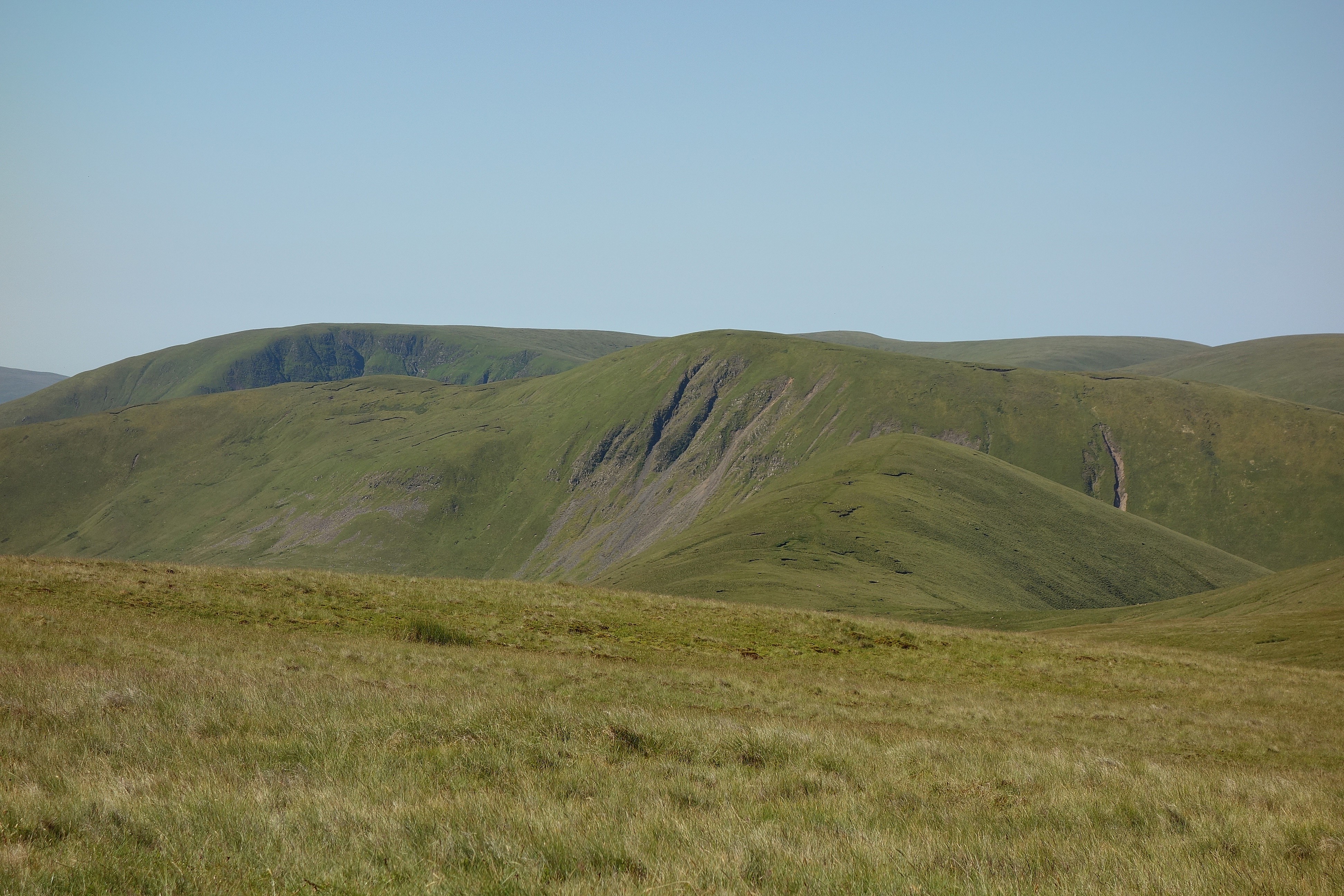 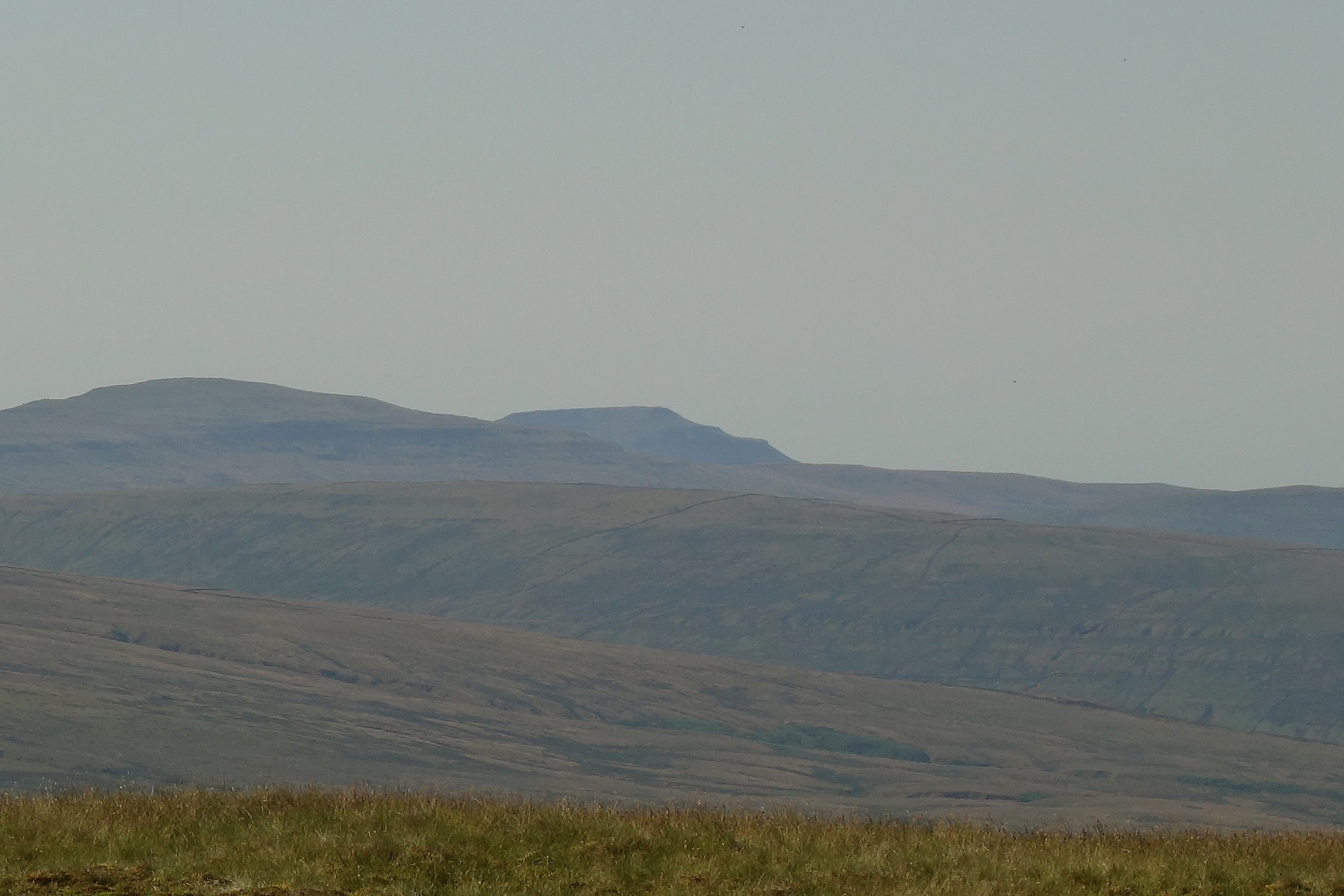 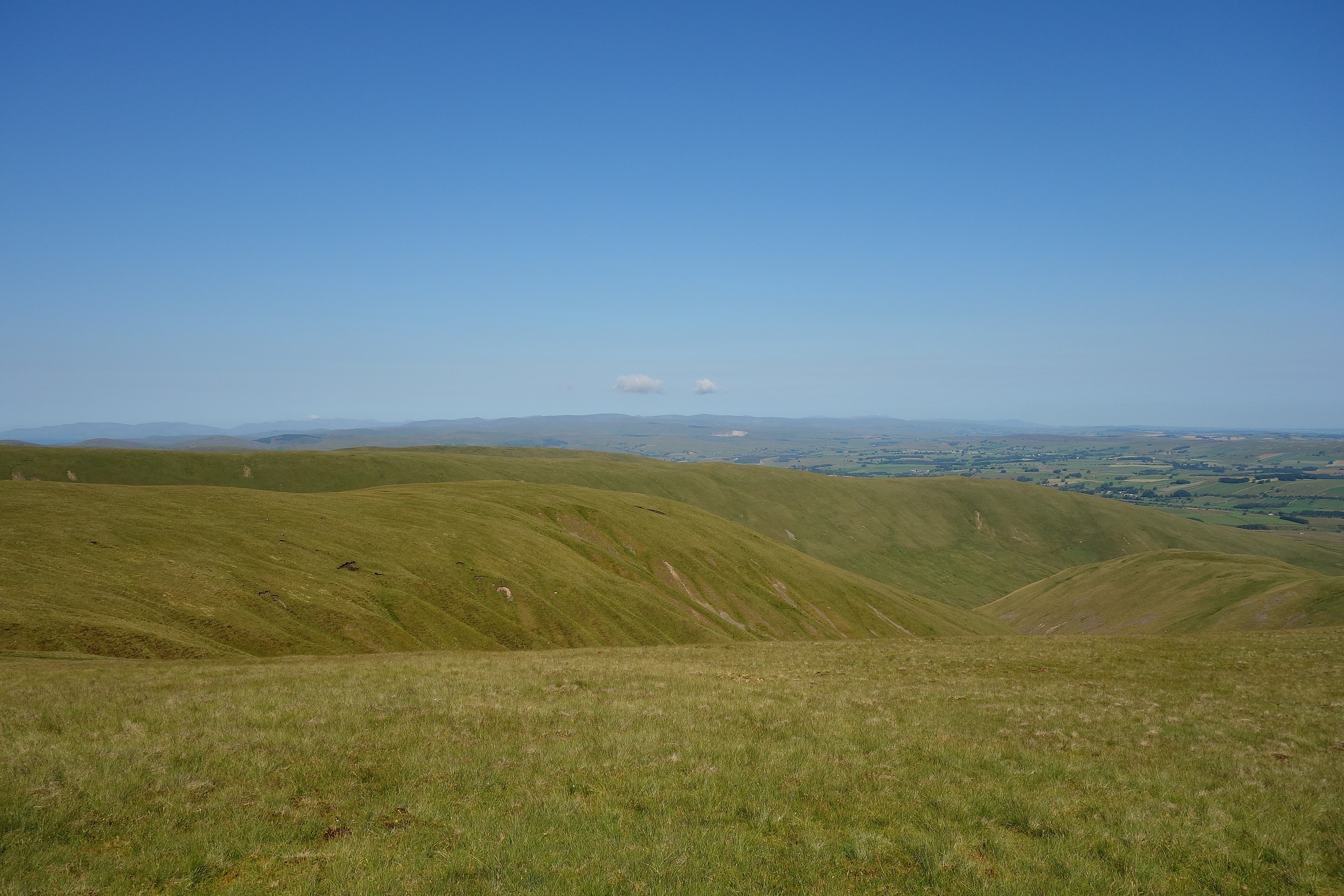 Next on the agenda was Randygill Top, from Green Bell it's a nice steady plod to the top, steepening just before the summit.

On the way we saw a lonely wandering cloud 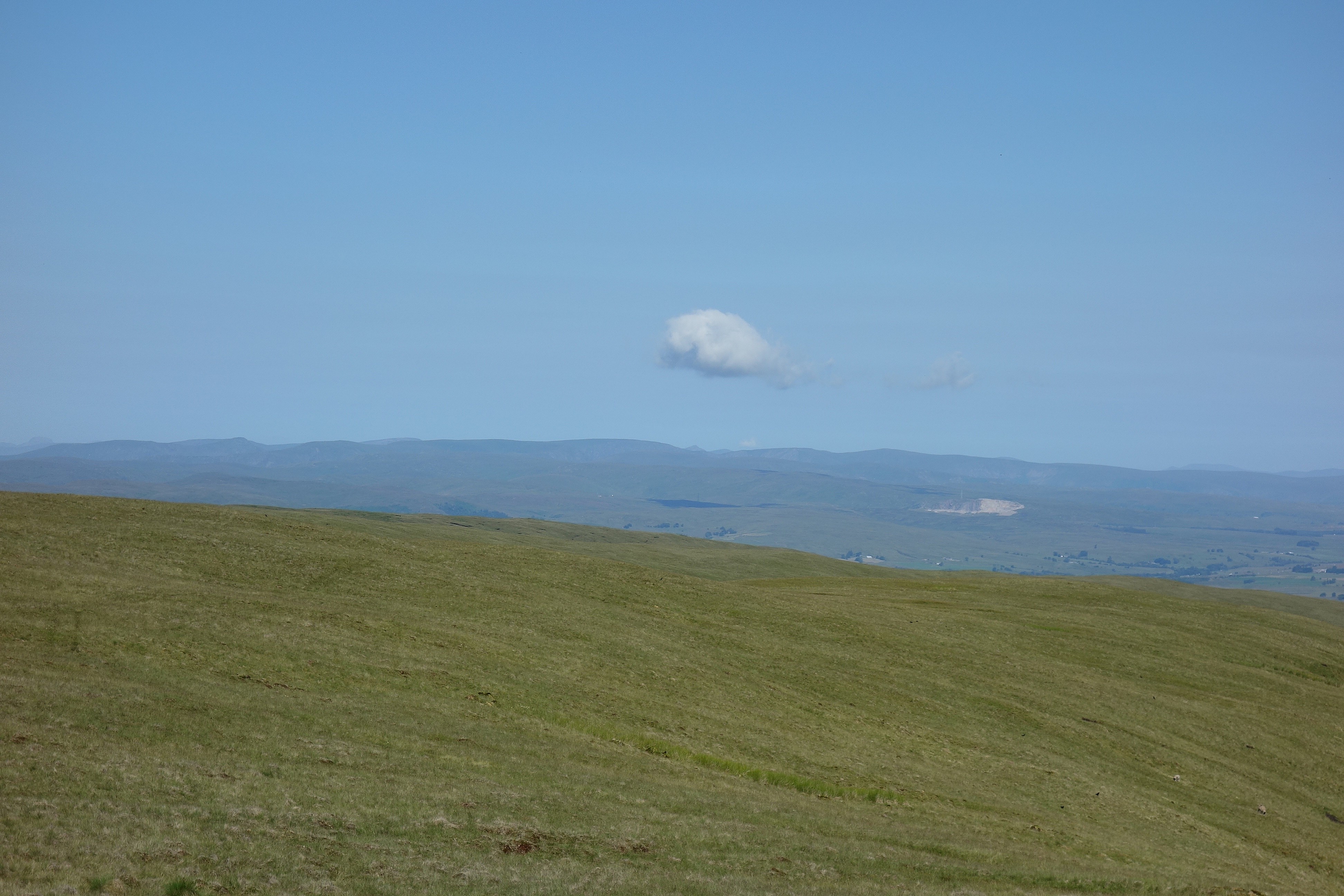 From the top the views are good, we couldn't go wrong today 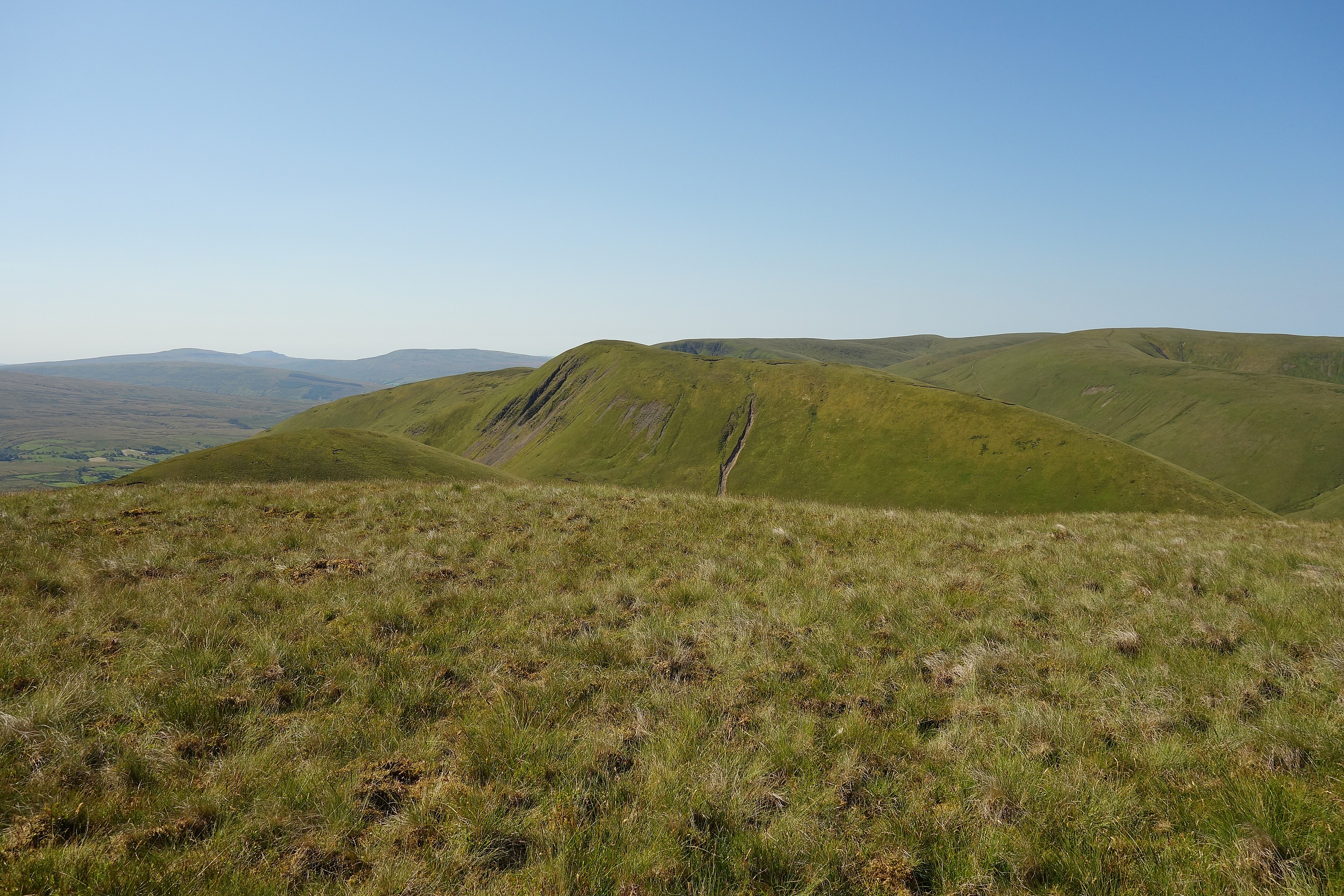 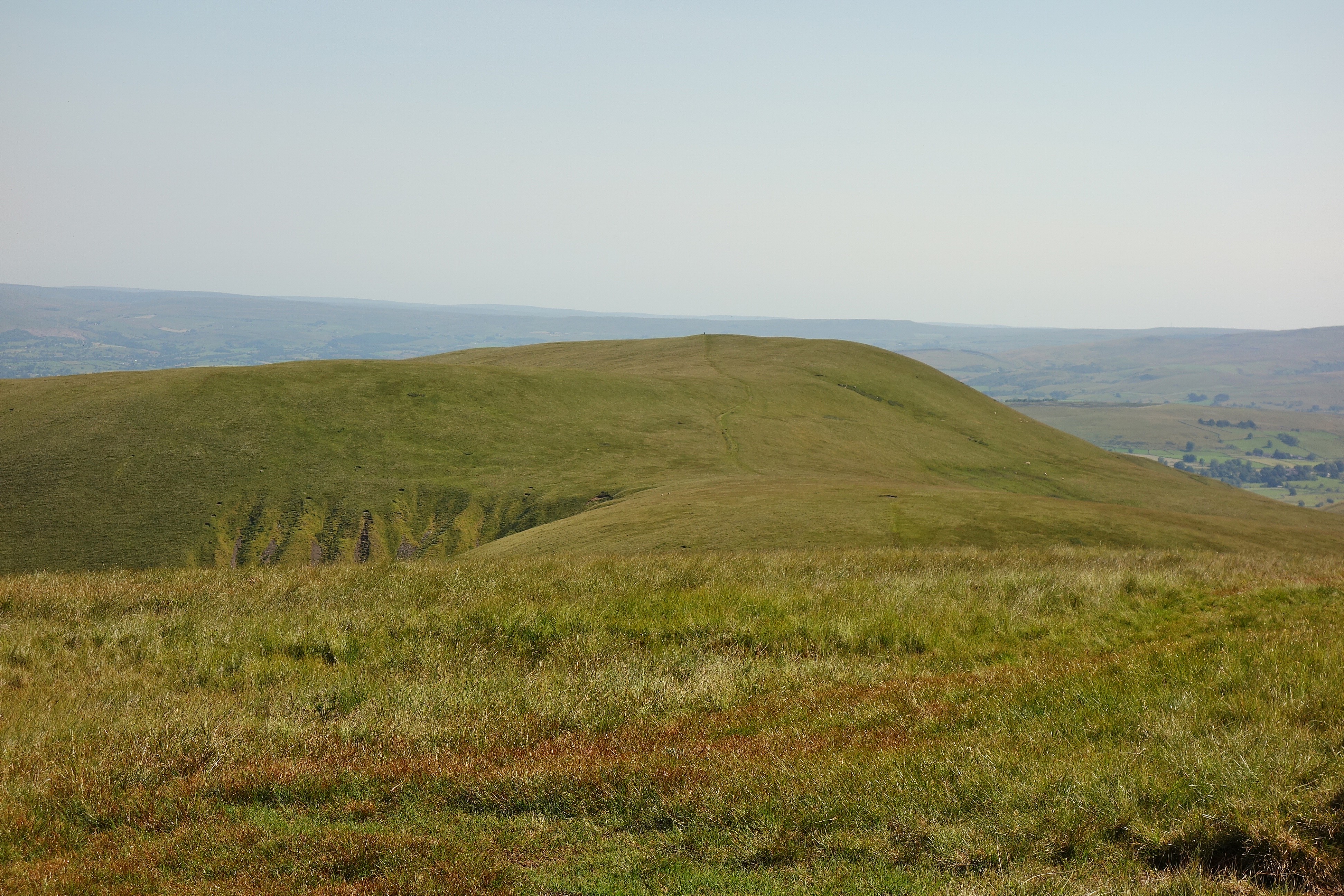 Next was Hooksey, the descent from Randygill Top down to Leathgill Bridge is steep, care is needed but the path zig zags to take the edge off the steepness. Once down and on the level we stopped for a break, it would have been a nice spot for lunch if we were later, we just had a snack then set off up the steepish climb onto Hooksey.

The ascent isn't bad at all, once on Hooksey we were treated to nice sunny views 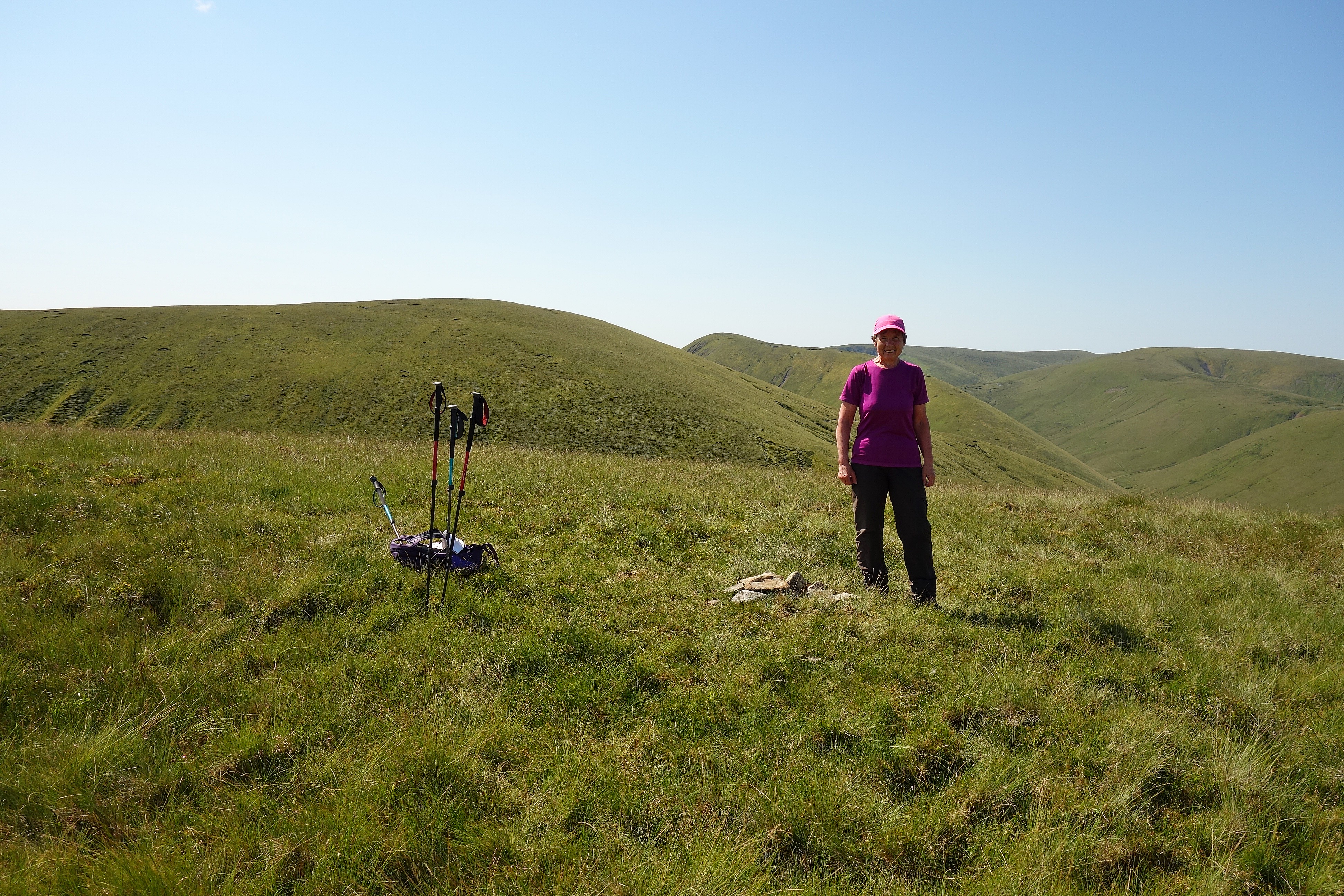 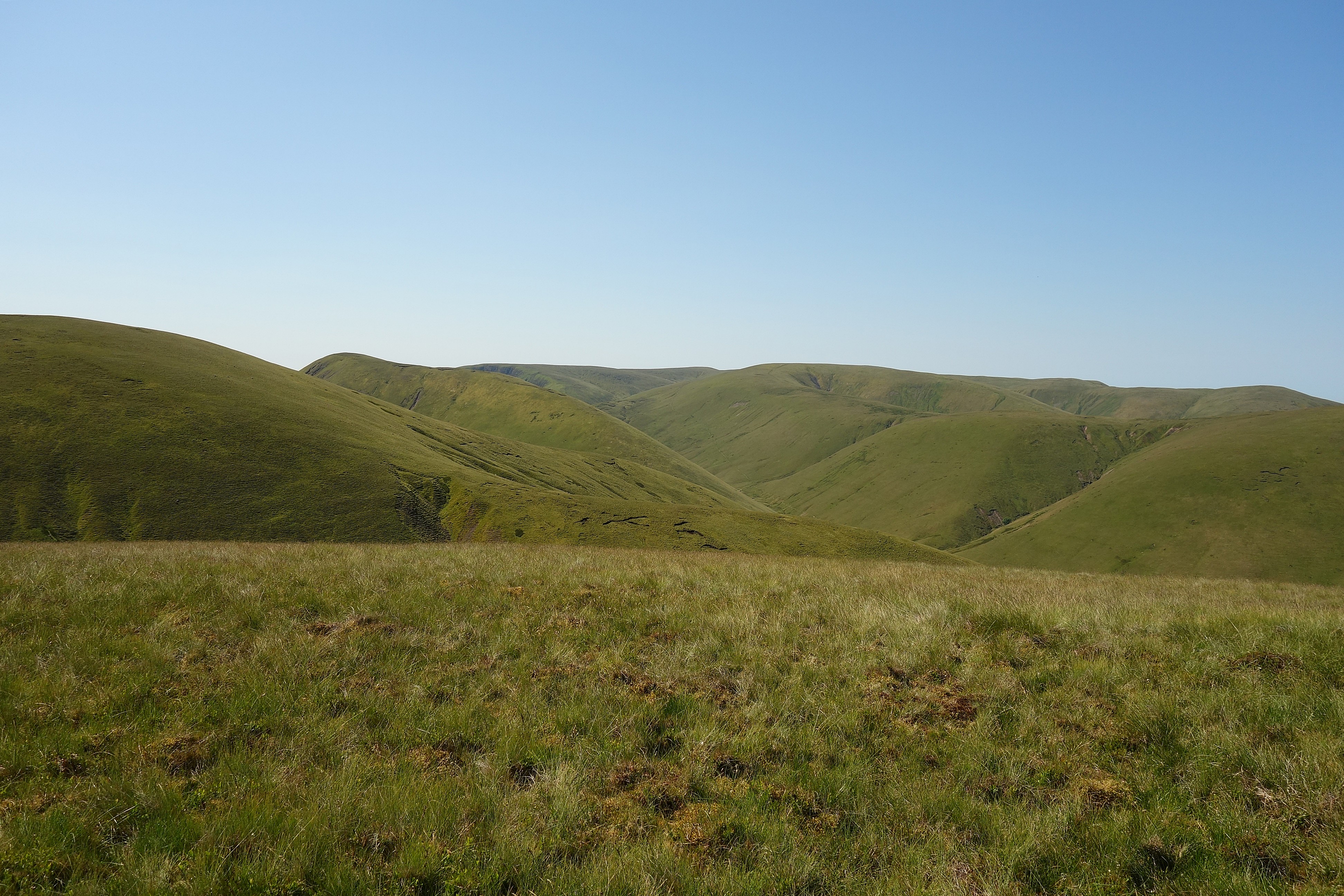 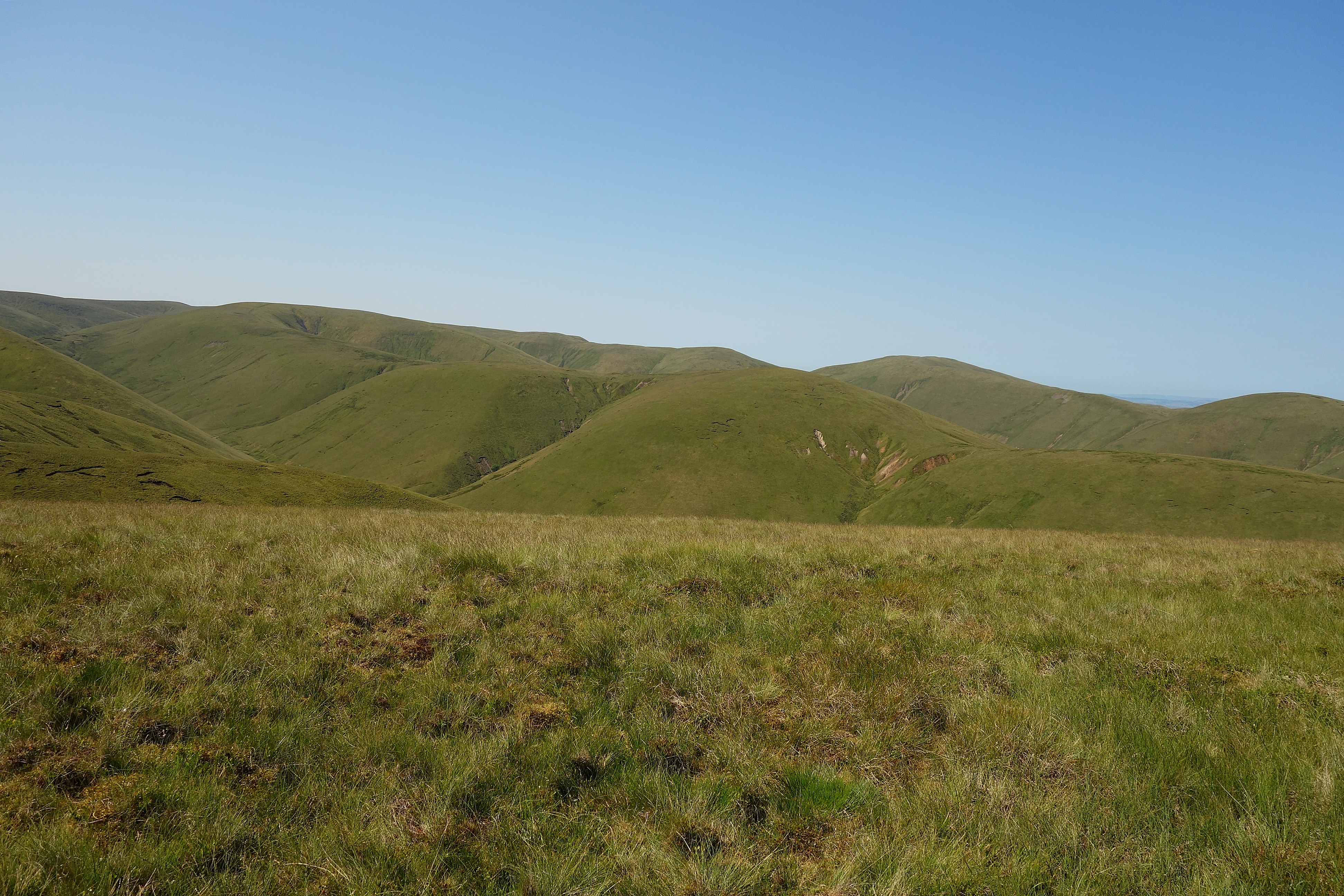 We had a long break next to the cairn, it was lovely just to sit and look around, relax with no need to press on, from here all the ascent was behind us, all that was needed now was the easy walk down to the farm at Weasdale.

We set off from the cairn, on the good track. About 10 minutes from the summit we met our first and only fellow walkers, a quick hello and "aren't we lucky with the weather?" we continued. 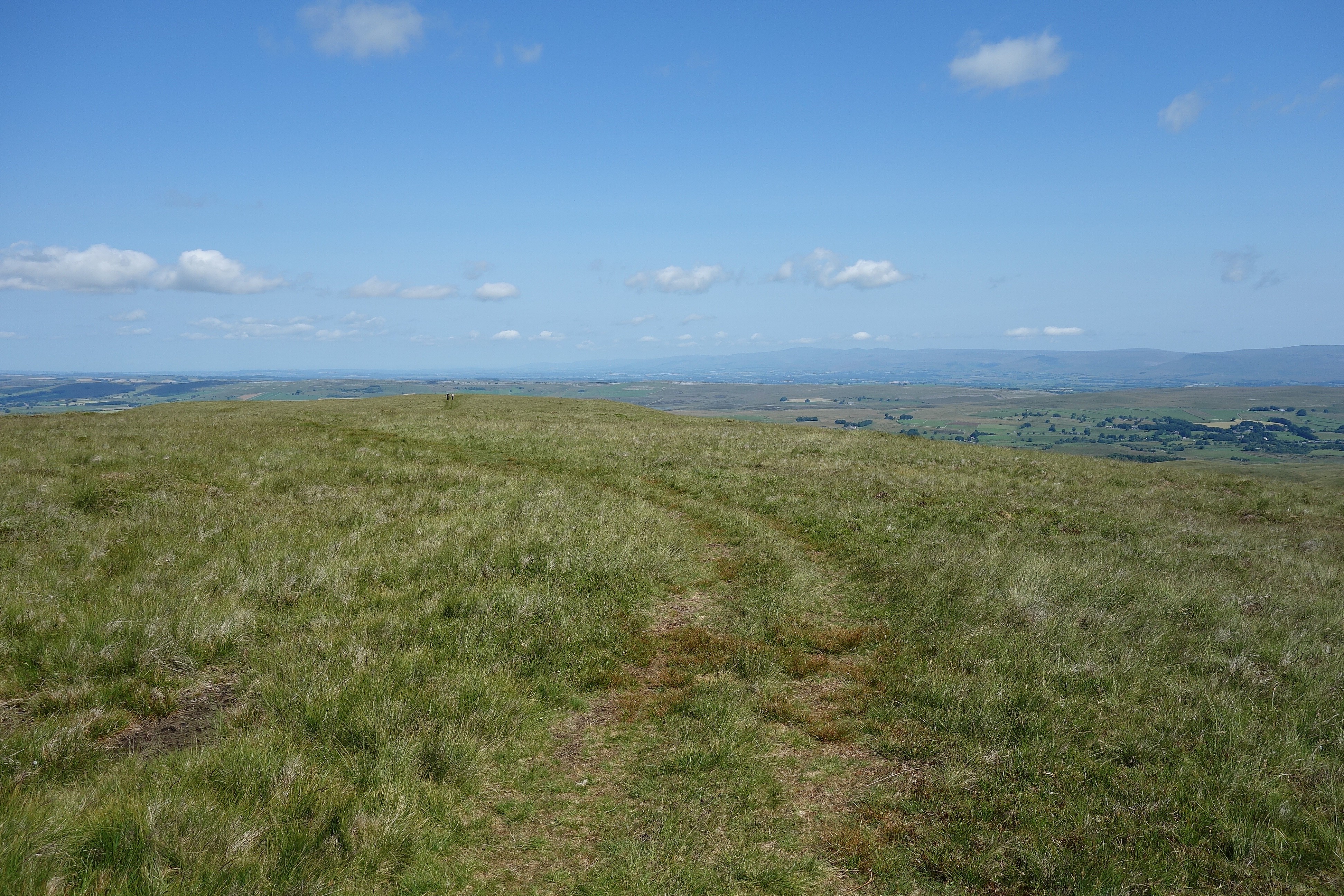 The walk down to the road is steady away, it gets a bit steep just before the wall, on warm and tired legs we just took our time. Once on the road it's a gentle amble back to the car.

There's a nice little cottage on the way complete with Reliant Robin (or Kitten, couldn't quite make out which)
in the driveway 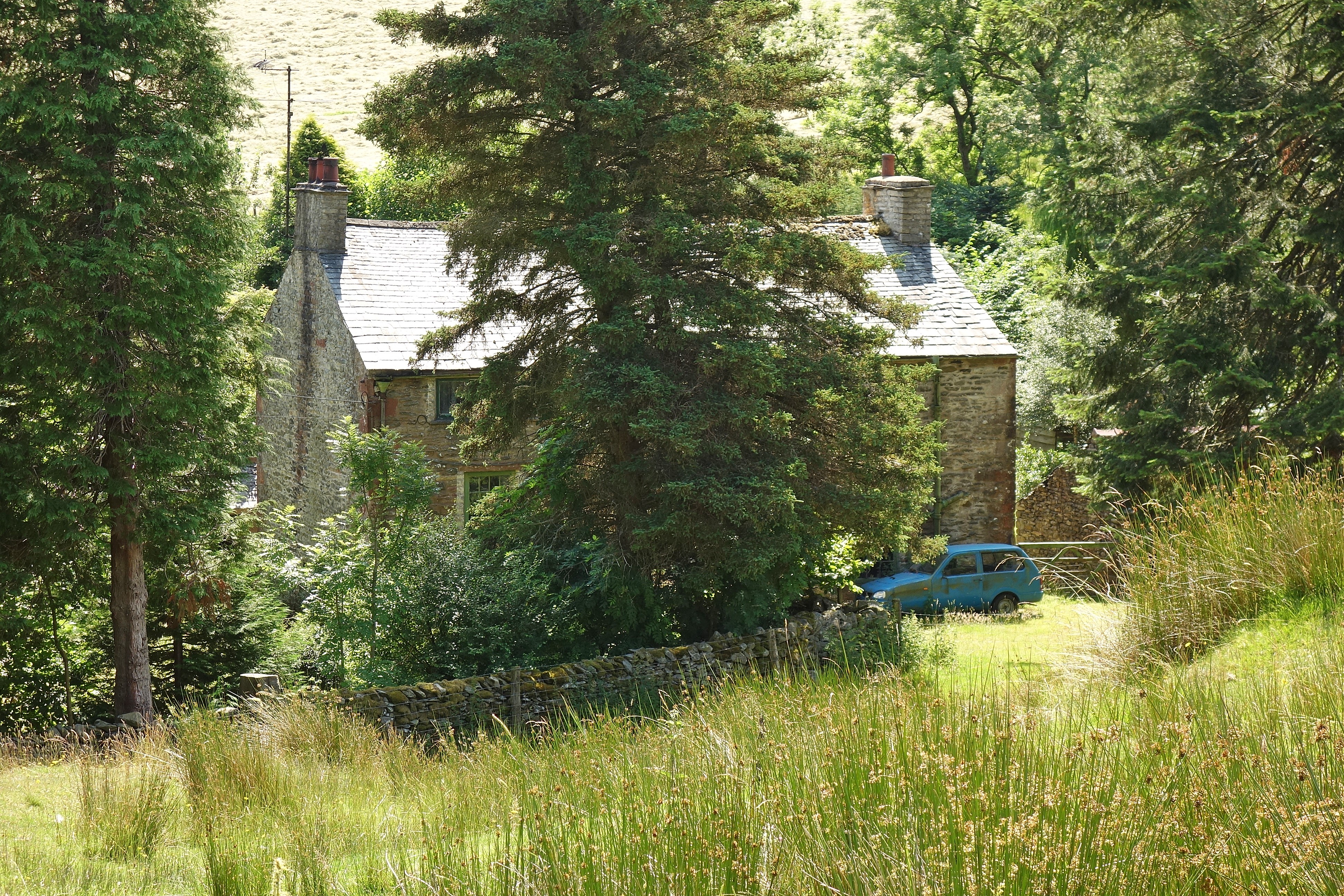 We could see our route down 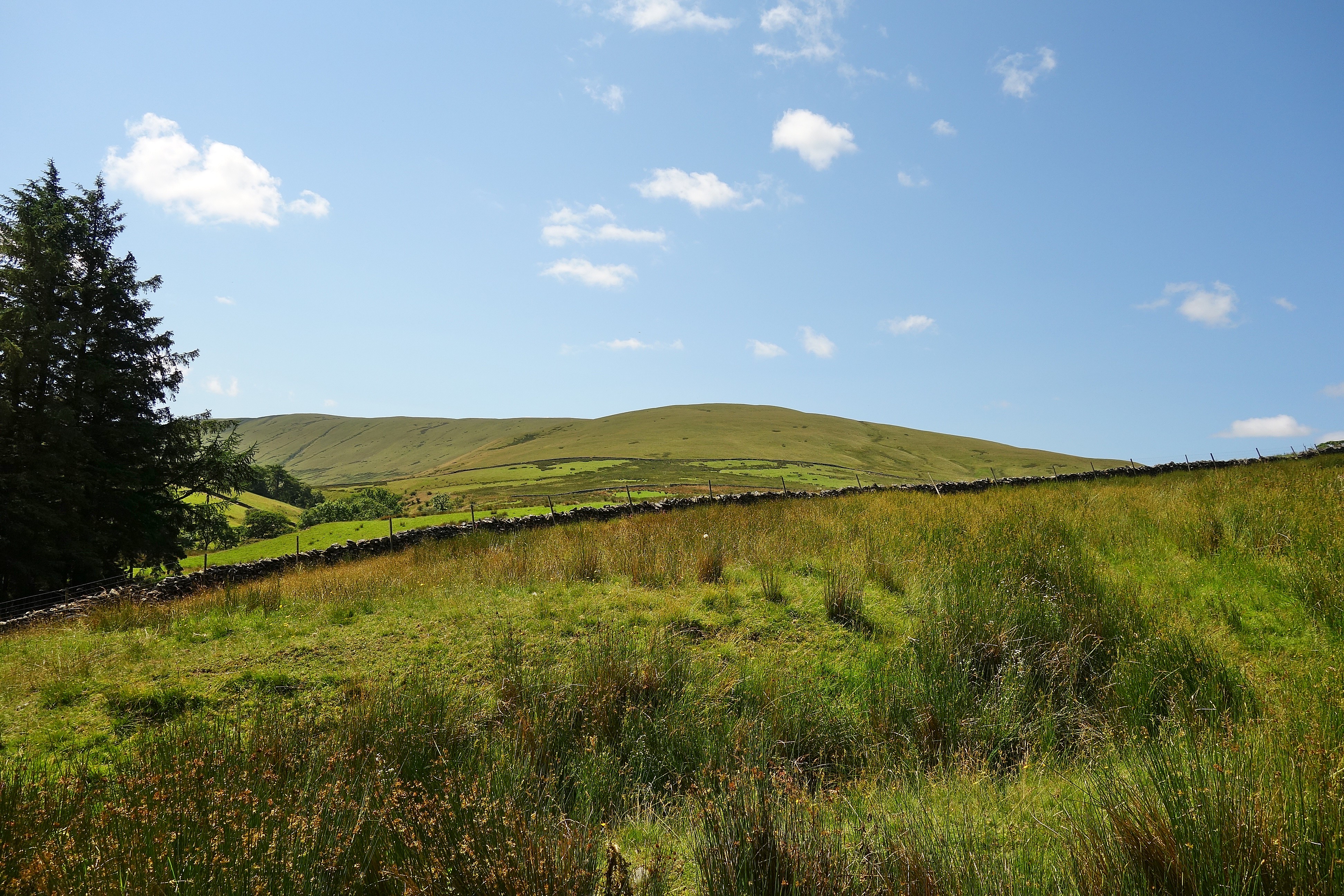 We continued on a nice leafy lane. 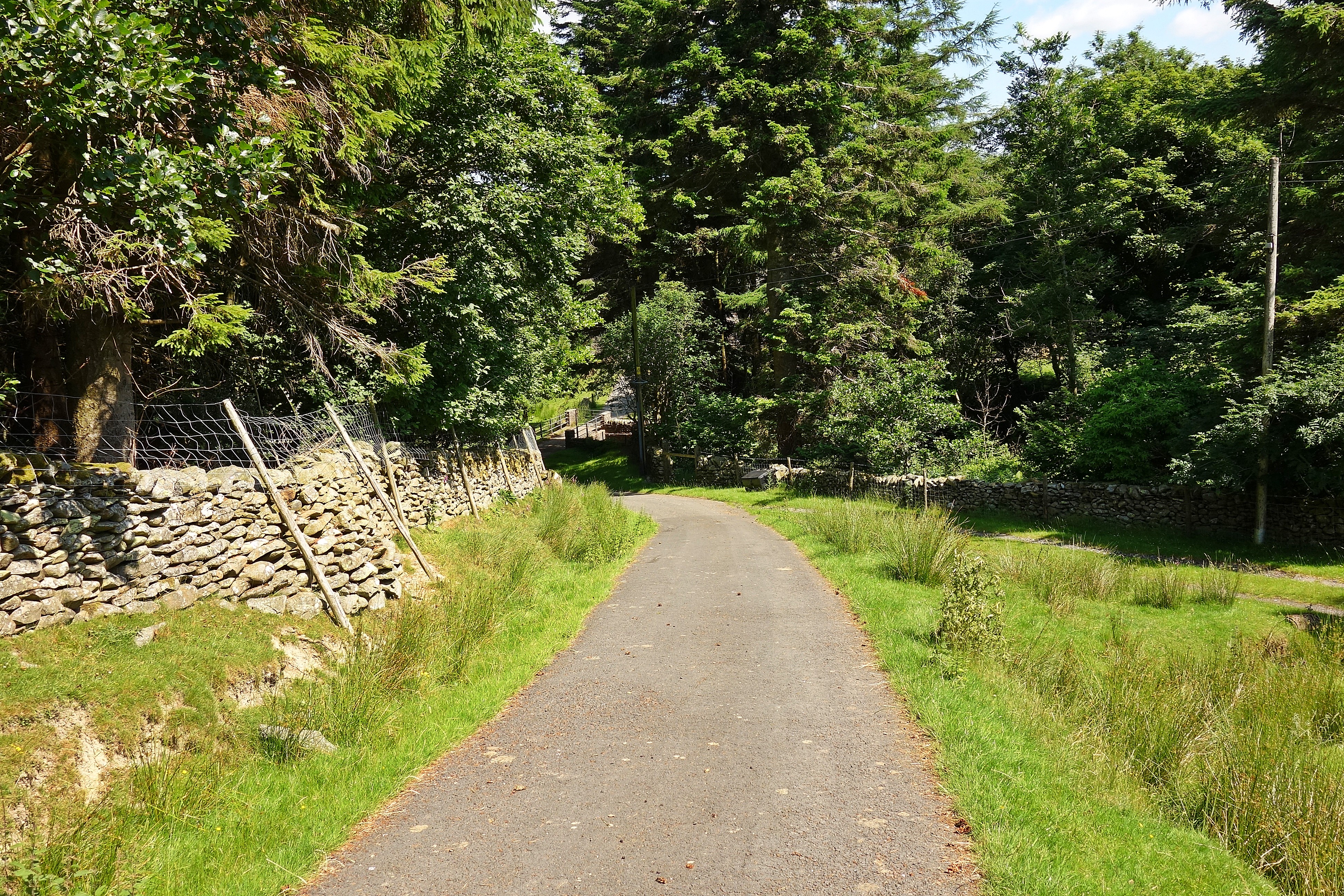 Back at the car we took the boots off, sacks in the boot then sat down in the peace and quiet and had a little picnic

It was nice to be out in such good weather and in lovely surroundings, We're off to Scotland in a couple of weeks, I hope the weather holds out, now, that will be brilliant

Nice one Martin.h and you chose a good place to be in these full of people LD times

The Howgills from the west side has many routes to choose from with some lovely valleys to walk along also before making a climb out if one so desires. Again, good report and photos of a good day out.

Hi TM
We're going to try somewhere new next time when we're out, I'm looking at Cross Fell, Little Dun Fell and Great Dun Fell in the day, haven't been up there for yonks

I'm just trying to decide the best place to start from, Milburn looks likely or Kirkland, I just have to suss out the parking

A lovely circuit for a not too strenuous day - i've done it many times following your route almost exactly . The Howgills look wonderfully green - and deserted

. For a longer walk drop down Great Randy Gill into Bowderdale - it feels amazingly remote down there

, follow the path to the Calf and return North along the ridge immediately W of Bowderdale

past my sell by date wrote:A lovely circuit for a not too strenuous day - i've done it many times following your route almost exactly . The Howgills look wonderfully green - and deserted

. For a longer walk drop down Great Randy Gill into Bowderdale - it feels amazingly remote down there

, follow the path to the Calf and return North along the ridge immediately W of Bowderdale

Thankyou, it is a nice quiet part of the Howgills that's for sure.
Your idea of extending the route is very much on the to do list, it looks nice. We've been down that way before and took in Langdale Knott, that's a bit off the beaten track but worth the effort.