All the places below were visited during the period of 6-9 May 2021. I work in Kazakhstan and had a week off which was an opportunity to visit some of the places in south-west Kazakhstan that had been on my to-do list for some time, most notably the Charyn Canyon and the "sunken forest" of Lake Kaindy.

This was a road trip, but involved a certain amount of hiking, as well as rowing and horse riding, so it seems appropriate to share here. First stop was the Retro Museum at Kapchagay, a combined car and Soviet memorabilia museum. It is well worth the visit and is on the way to the Altyn-Emel Mountains. We visited two locations, firstly a site of rock formations, presumably eroded by the desert winds.

I switched lenses and left a £500 lens on a rock to collect later. In actual fact, I would have been better keeping it on the camera for the shots that followed. Anyway, we drove off down the bumpy dirt track and after about 20 minutes I realised that I had forgot it. It was not very far back in terms of distance but the ground could not be covered at speed, even in a 4x4. I knew exactly where I had left it and all was well.

Then we continued our journey to the main objective of the day and did a bit of a hike over the stony mounds for a bit of exercise, to explore and to gain a better view of these striated, golden mountains. This scene is used on the 1000 tenge bank note

These are near to the Altyn-Emel mountains and are part of the Altyn-Emel National Park. As we arrived, it began to rain. Inly I could visit a desert and have it rain.

From Wikipedia: The "Singing Dunes" are located 300 kilometers (190 mi) from Almaty. The area is referred to as the Singing Dunes on account of the rumbling sound emitted from the sand. The Singing Barchan dune is 1.5 km (0.93 mi) long and 120 m (390 ft) high. The barchan is a crescent in form. When the wind is blowing from the west dispersing the sands, it can sound as if a pipe organ is playing. The cause of this phenomenon is still a mystery, but scientists theorize that in hot dry weather the sand gets electrified due to friction and creates a certain sonic vibration.

I was aware of a droning sound as people descended the sides of the dunes, and assumed that this was what was meant by "singing". We stopped off here on the way to the Charyn Canyon. I think of mountains as consisting of rock, but it seemed more like sculptured earth. We hiked down and cadged a lift back up with a high spirited group singing Russian and Kazakh songs including the National Anthem of Kazakhstan. It was getting a bit late and dark for taking good photographs, so we returned two days later. 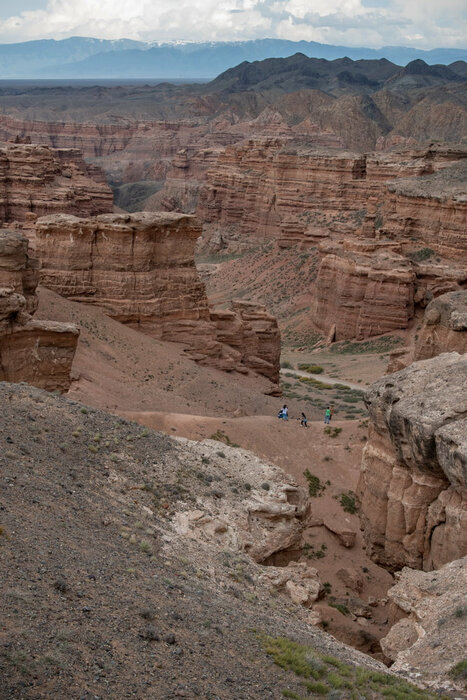 Lower and middle Kolsay Lakes
This was the best hiking of the trip.

Lower Kolsay Lake. A natural mountain reservoir formed by landslides that block the Kolsay River. The lower lake is about 1 km long, 400 meters wide, and 80 meters in depth. It is accessible by road and has guest-houses and campsites. (altitude: 1,818 meters).
Middle Kolsay Lake (Mynzholky - meaning "1000 years old"). Five kilometers upstream from the lower lake, the middle lake is the largest of the three, and reaches a depth of 50 meters. (altitude: 2,252 meters). It is considered the most scenic of the three Kolsay Lakes.
​
The route between the two is approximately 16km (including rowing) and 450m ascent. You can pay to be taken on horseback, but we rowed and hiked. On the way down, I sprained my ankle but I was still the first to walk back on the undulating path back along the lake.

Warning! The water of Middle Kolsay Lake is extremely cold! We made our way to the lake on horseback and then walked up the side to the sunken forest.

Located 11 km east of the Kolsay Lakes, Kaidy Lake is located by the Chilik River. The lake is known for its mirror-smooth reflection and stands of dead spruce trunks rising from the water. It was formed in 1911 (when an earthquake caused a landslide that blocked one end of the gorge).

Gulzat wanted to show us the stone gates and we headed steeply uphill through the forest. I had no idea what we were looking for. Concluding that we were not going the right way, we headed back down, though it seemed like I was guiding the guide back down!

​We then explored upstream and I could see some cliffs up ahead, so while Gulzat headed back, I jumped in the river and continued upwards, crossing the river and crossing it back, up scree and rocks until I was at the point from which the photograph was taken bottom right.

Crossing the river on the way back, I slipped and my camera was totally dunked for a second or two. My camera bag was open and filled with water, which I had to tip out. Thankfully the Pentax K-70 is weather sealed, as is the Pentax 20-40mm ƒ/2.8-4 ED Limited DC WR lens. I am not sure if the camera would have survived if I had been using my Sigma 70mm EX DG MACRO which, while it is a super sharp lens, is not weather sealed. On my return, Gulzat was delighted to see me. She feared that she may have lost a client! She was also happy because she had found the proper way! It was in fact a good path to where the river ran into the lake. Logic means that you need to follow the river downstream to the point at which it enters the lake, so I have no idea why we went up the hillside and then sent me upstream, negotiating difficult terrain ..... but it was fun! The photograph does not really show the canyon but I like the stormy skies. 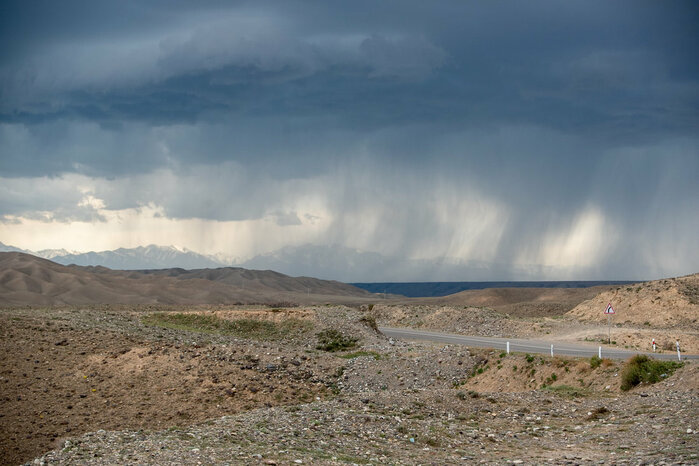 A fascinating-looking (huge) country. Thanks for giving us a little insight! The scenery looks amazing.