2021-08-20 Seathwaite Fell.gpx Open full screen  NB: Walkhighlands is not responsible for the accuracy of gpx files in users posts

Walking from the hotel again - plan as for something a little shorter than yesterday, which had left us both pretty tired, but it turned out to be almost as long...

As yesterday, we set off towards Mountain View and the start of the path through the fields to Seathwaite 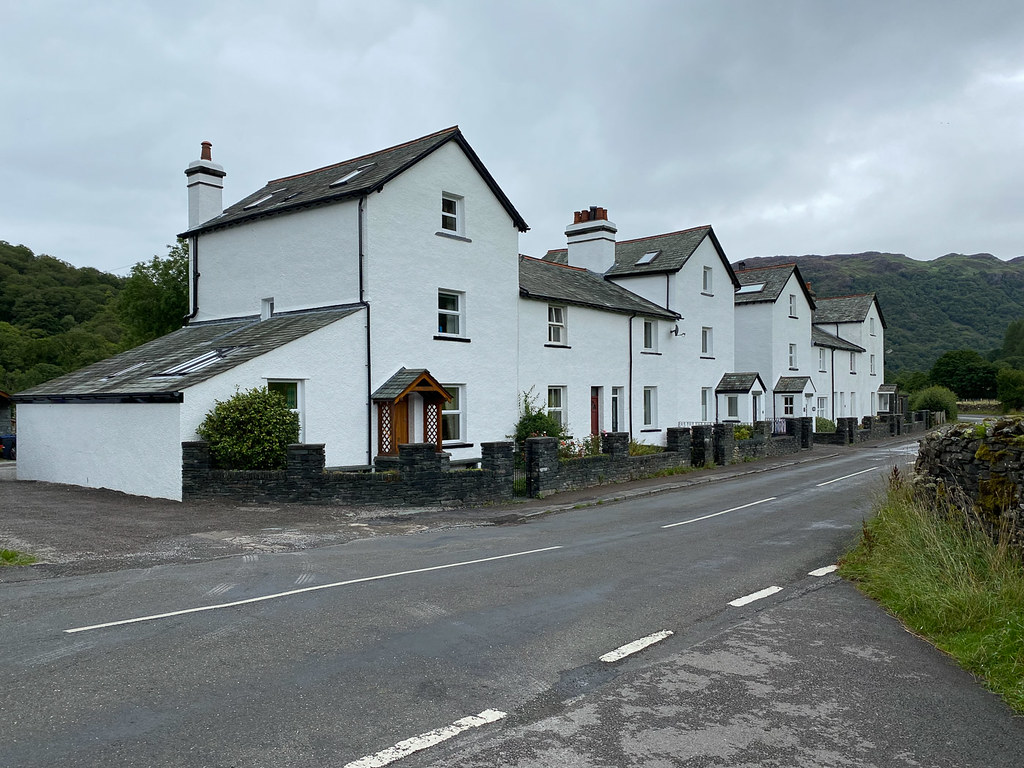 Wainwright describes this path as not being well known, and as a result very quiet - it may be quieter than the road but there were still a few people on it today. 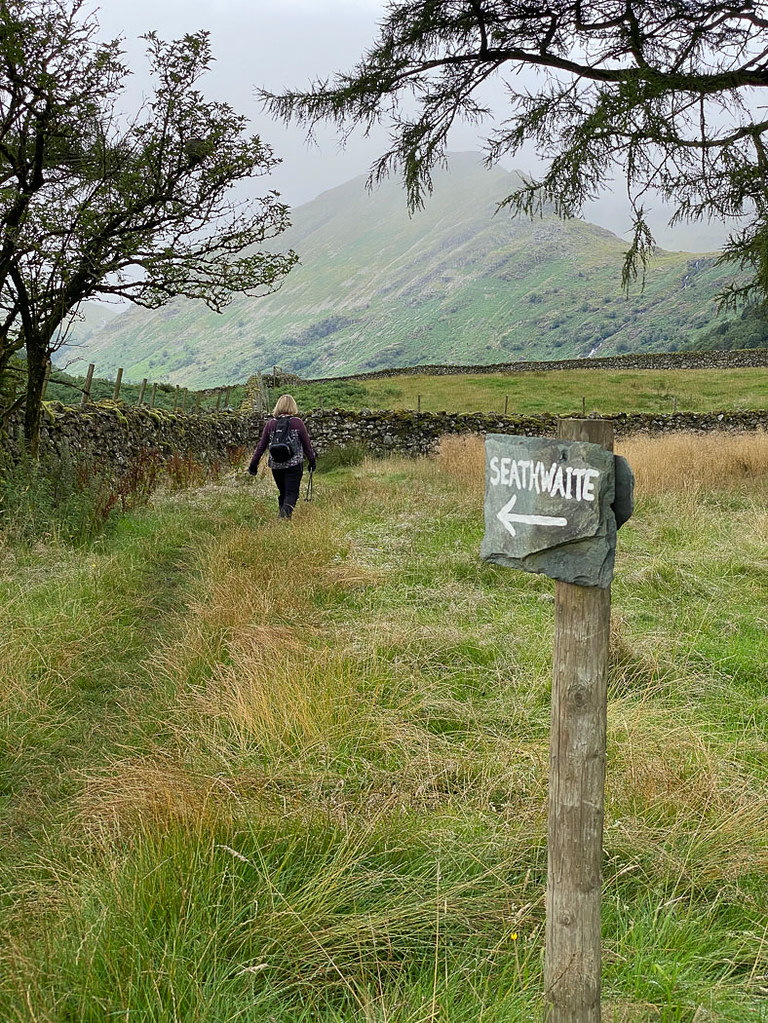 The path over the fields to Seathwaite

Maybe one reason it is quiet is the "beware of the bull" notice posted on one of the gates you have to pass through. Fortunately there was no evidence of a bull ever having been present... 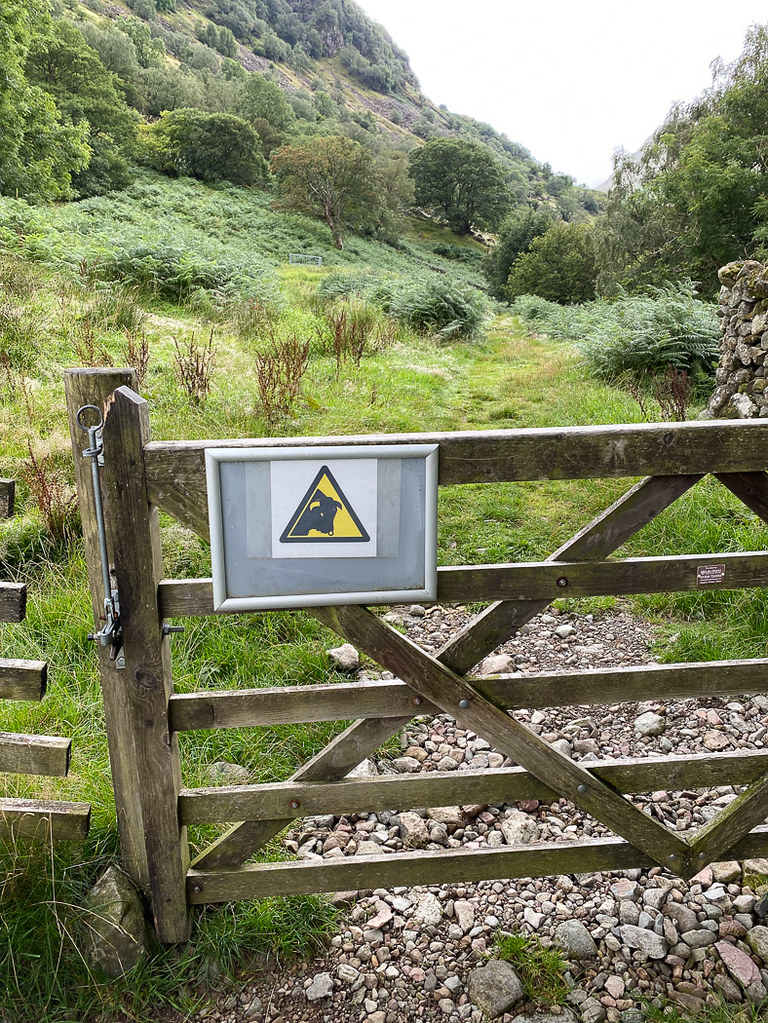 Beware of the bull

I find it impossible to pass Stockley Bridge without taking a photo - or several... 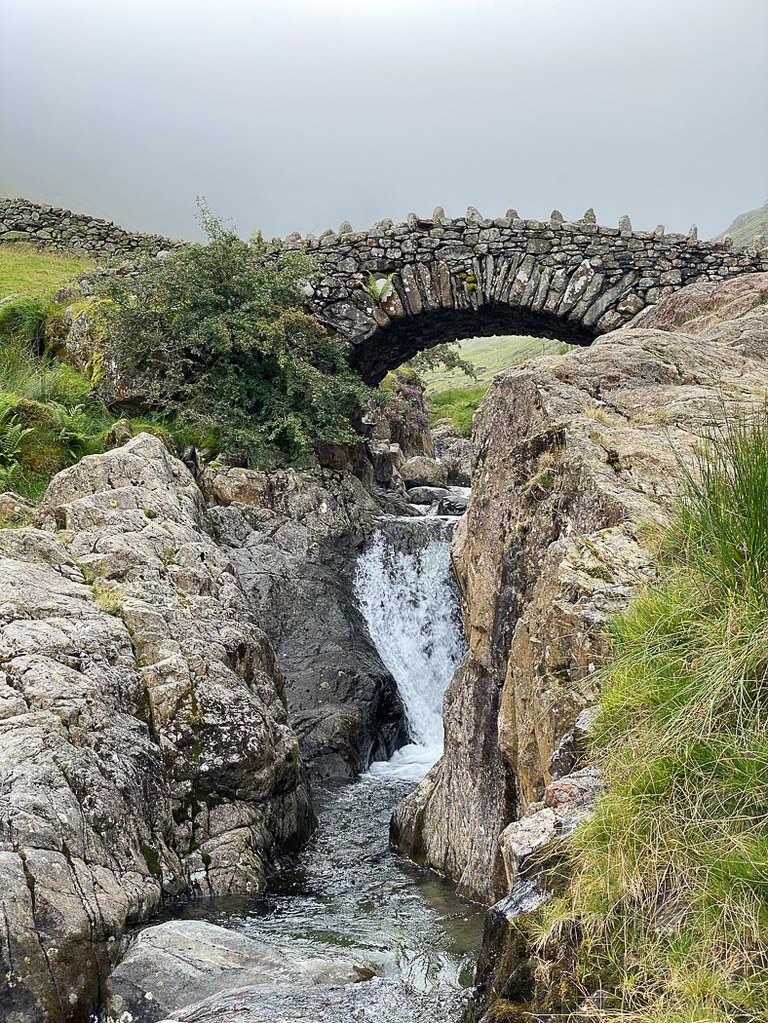 The forecast had suggested that the morning would be better than the afternoon as far as cloud levels were concerned, but it did not look especially promising. 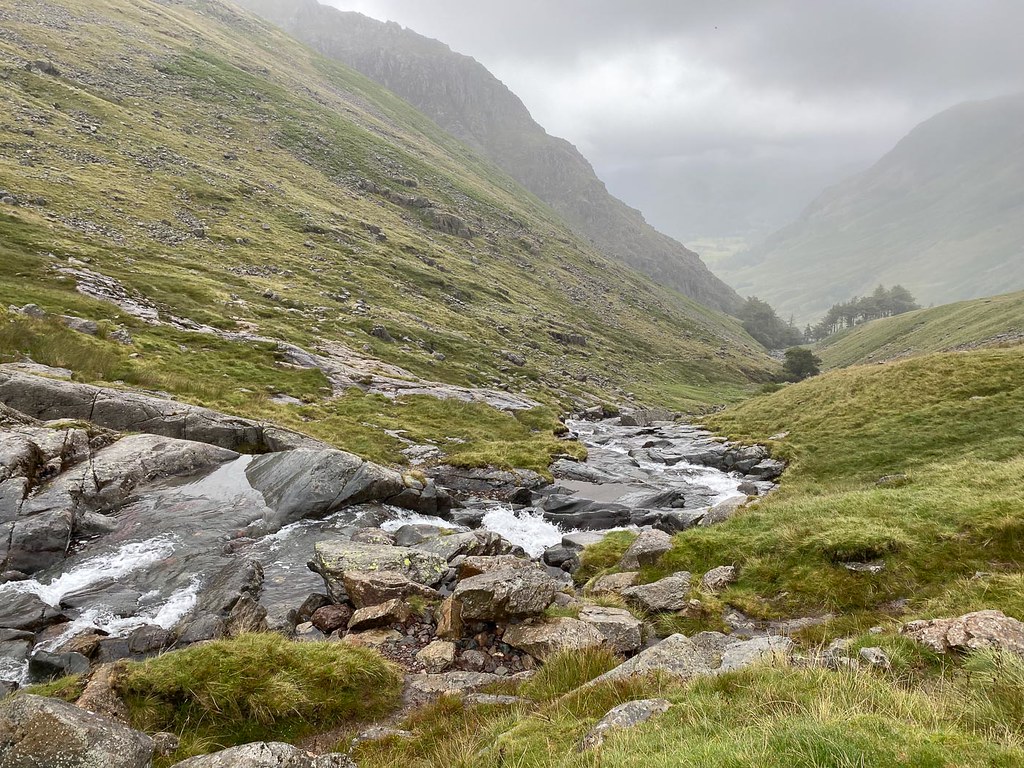 We had contemplated taking one of the routes up the side of Seathwaite Fell as described by Wainwright, but they didn't look very appetizing - and they did look very steep. We were also worried about navigating a route that basically says "aim for the green gap in the crags" when said crags were liable to disappear into the cloud at any moment. So we decided to go the long way round via Sty Head and Sprinkling Tarns 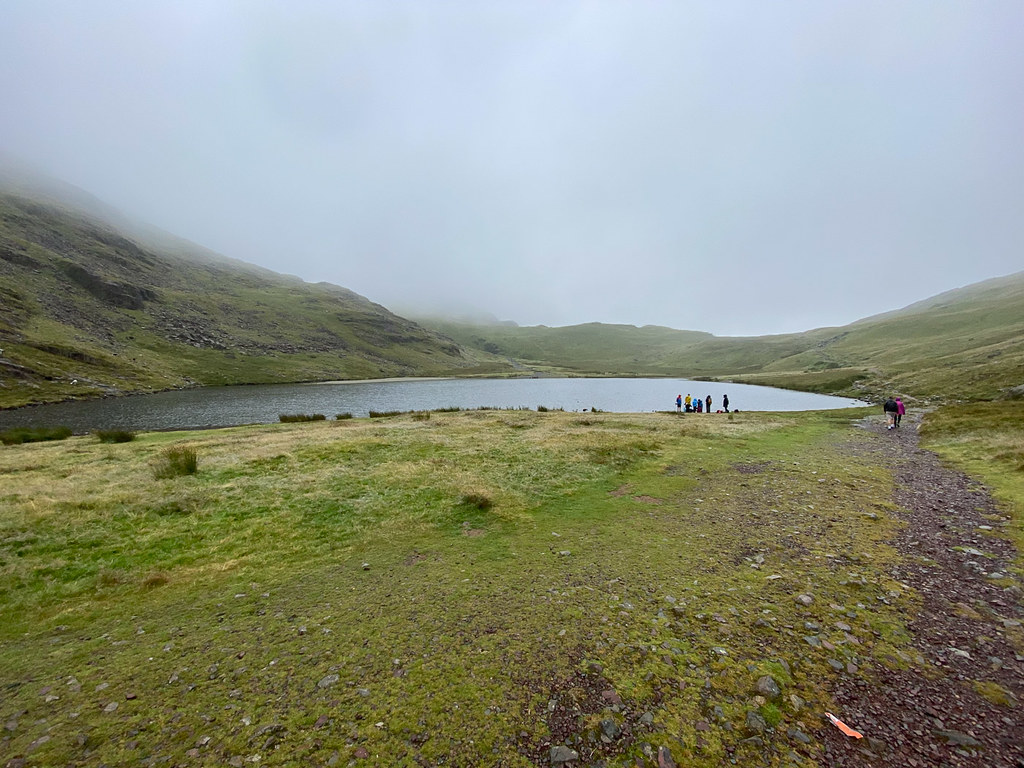 The path up to Sty Head tarn is very well build, reasonably gentle, and very well frequented - though we were probably the only ones using it to get to Seathwaite Fell rather than Scafell Pike. 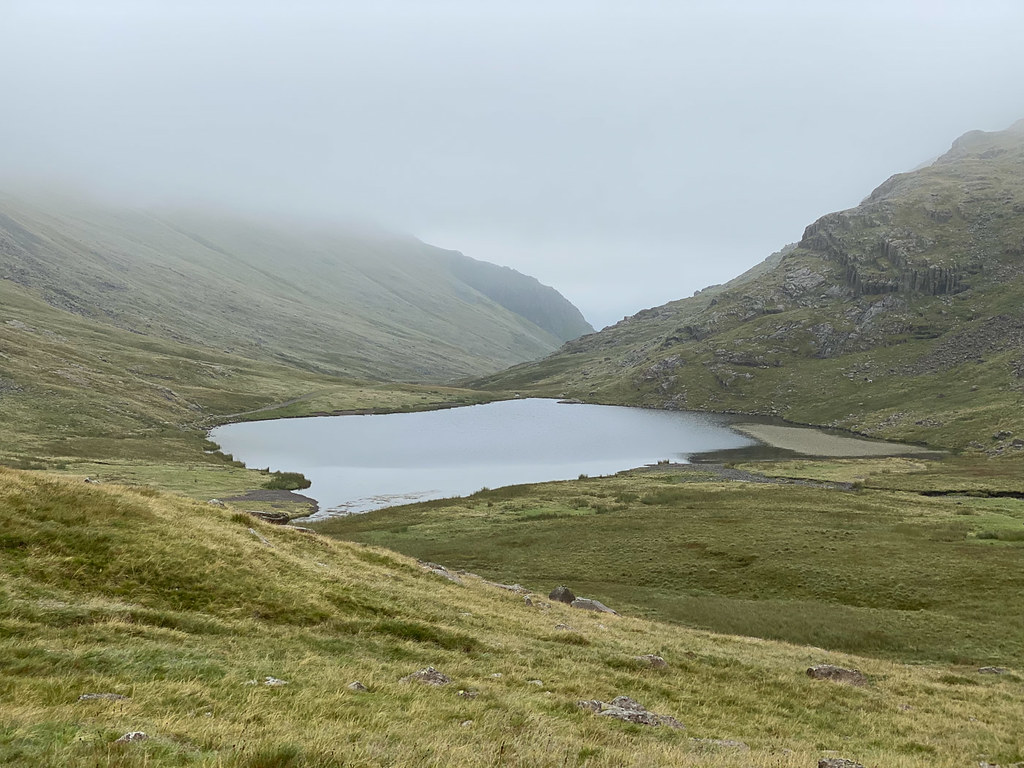 We paused for a snack above Sty Head tarn, then pushed on upwards towards Sprinkling Tarn where we stopped for lunch. We also discovered that the sole was detaching from Lorraine's boot - we tied it on for now with elastic cord from the rucksack, but that provided an easy answer to the question of where we are going tomorrow. Keswick boot shops, here we come! 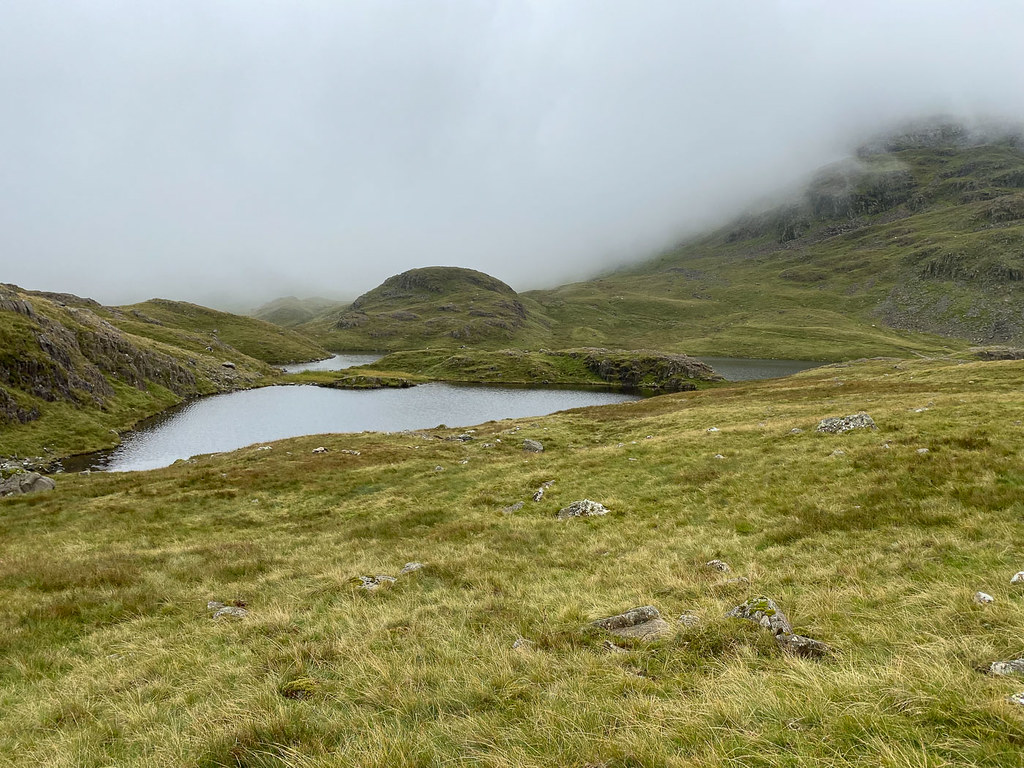 From Sprinkling Tarn I was pleasantly surprised to find a reasonably well-defined path down the ridge to Seathwaite Fell - and even more surprised to find the first tarn we came to had a contingent of resident ducks. 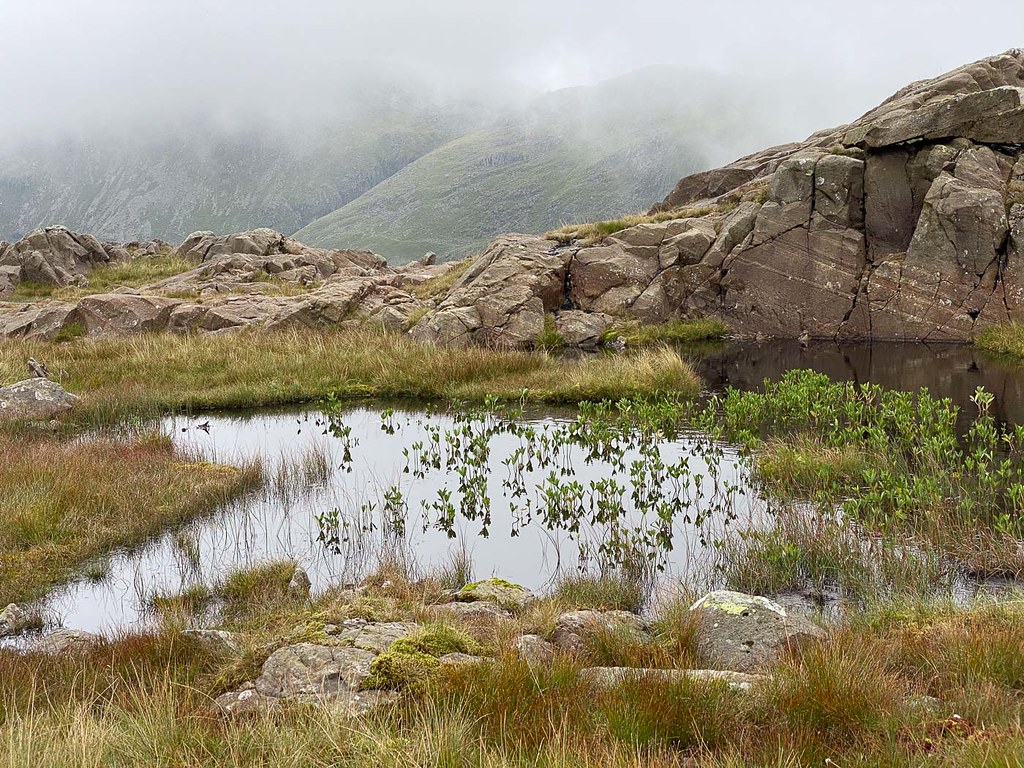 The walk along the ridge to the summit of Seathwaite Fell was lovely, and the clouds seemed to be rising at last, so that views were finally possible. 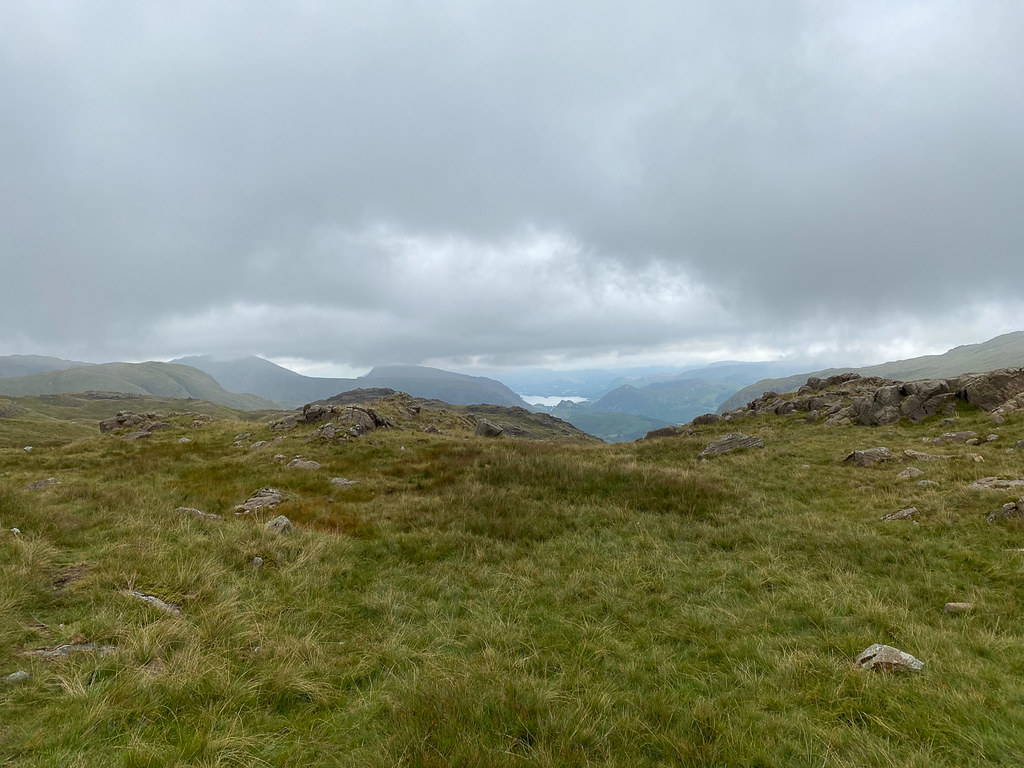 A view at last

We ignored the alternative summit and headed straight for the Wainwright top. 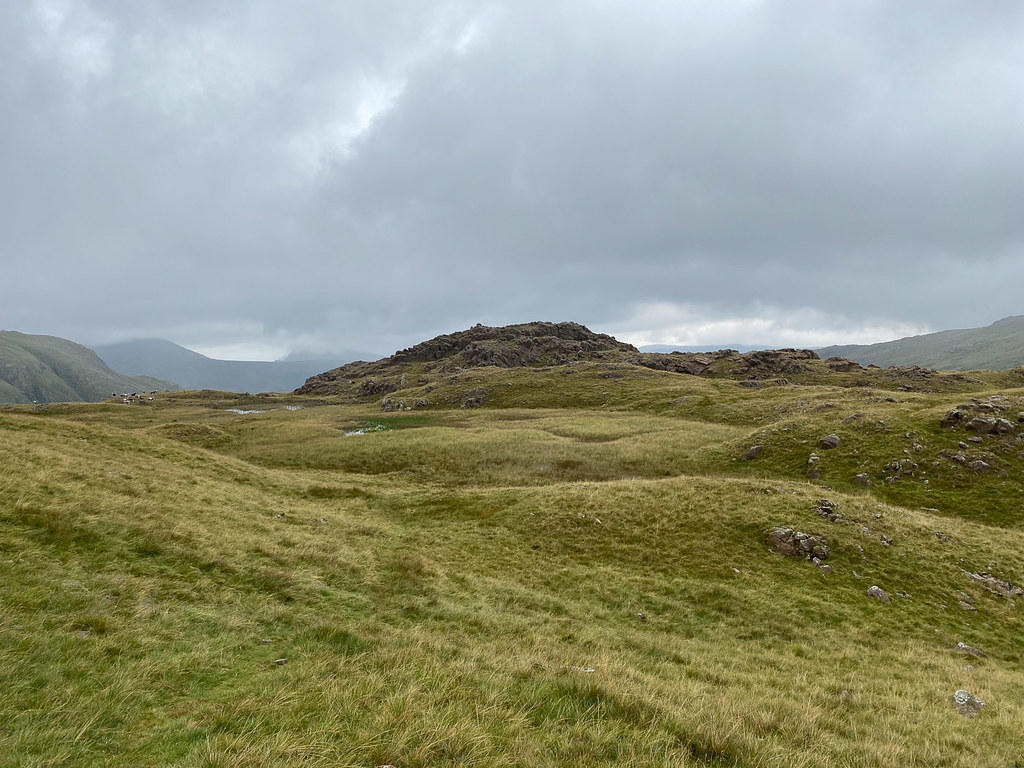 The views from the top were nice - would be better in fine weather. 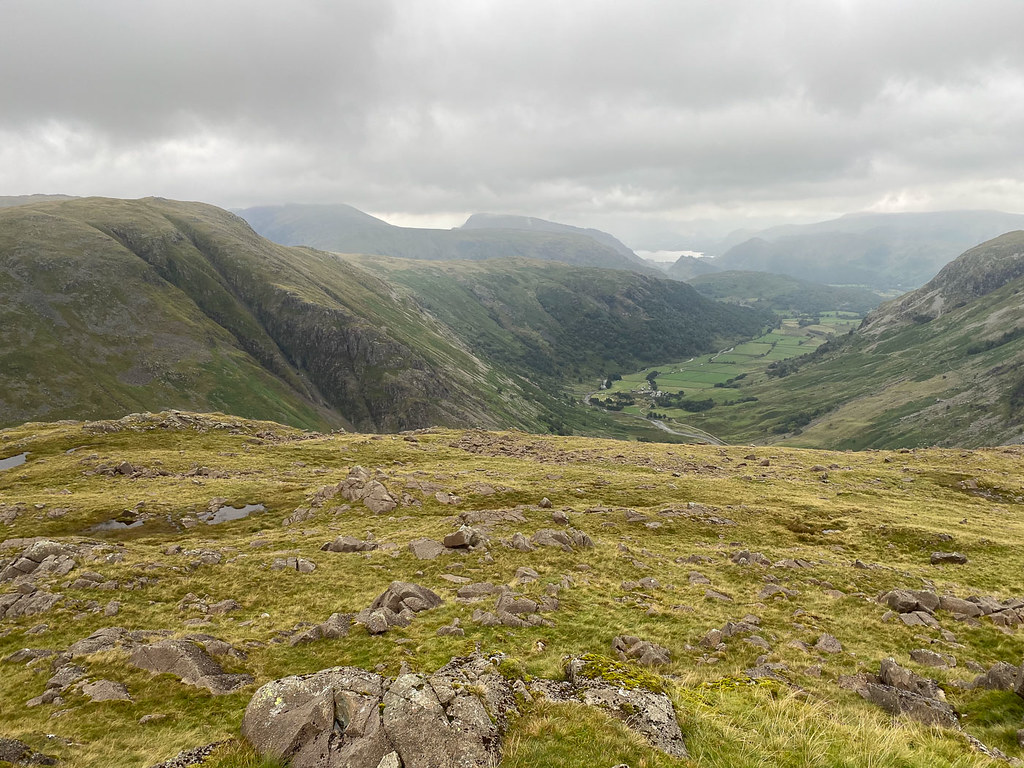 We didn't fancy the long way round to get home, so decided to try our luck at finding the route 'B' down the north flank as described by Wainwright. Not too steep, he claims... 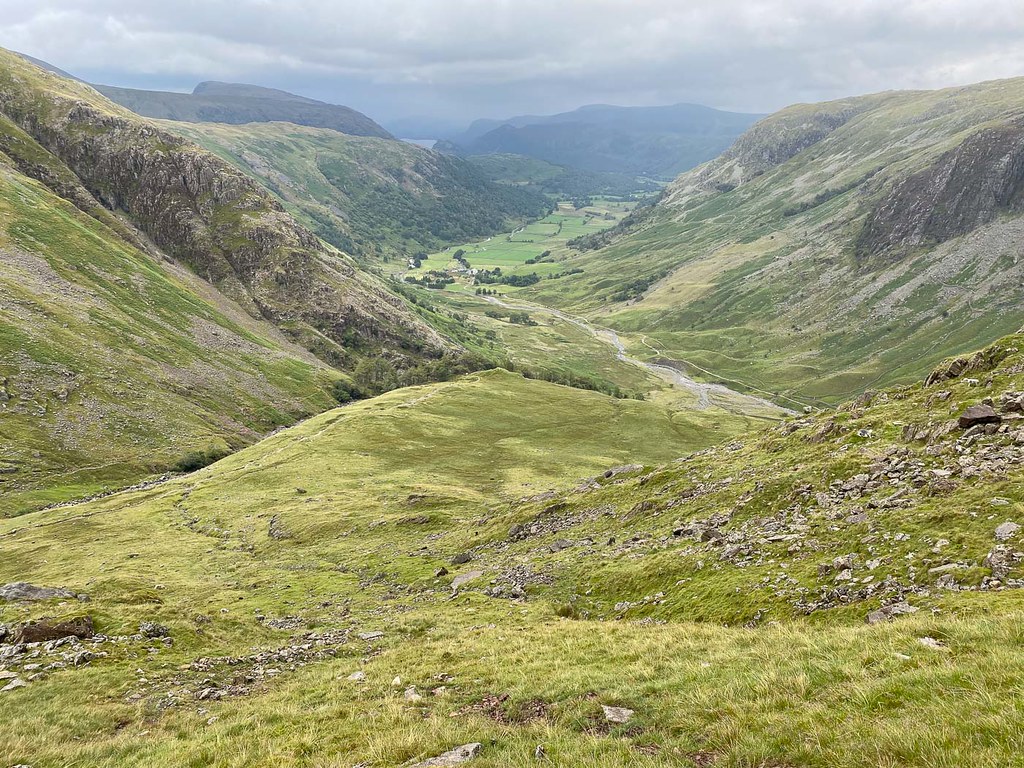 A view down Seathwaite valley

On re-reading the page, he says route A is very steep and route B is "easier" - which I guess means he considers it only "steep". I consider it uncomfortably steep for a descent, and I'm glad we did not come up that way. 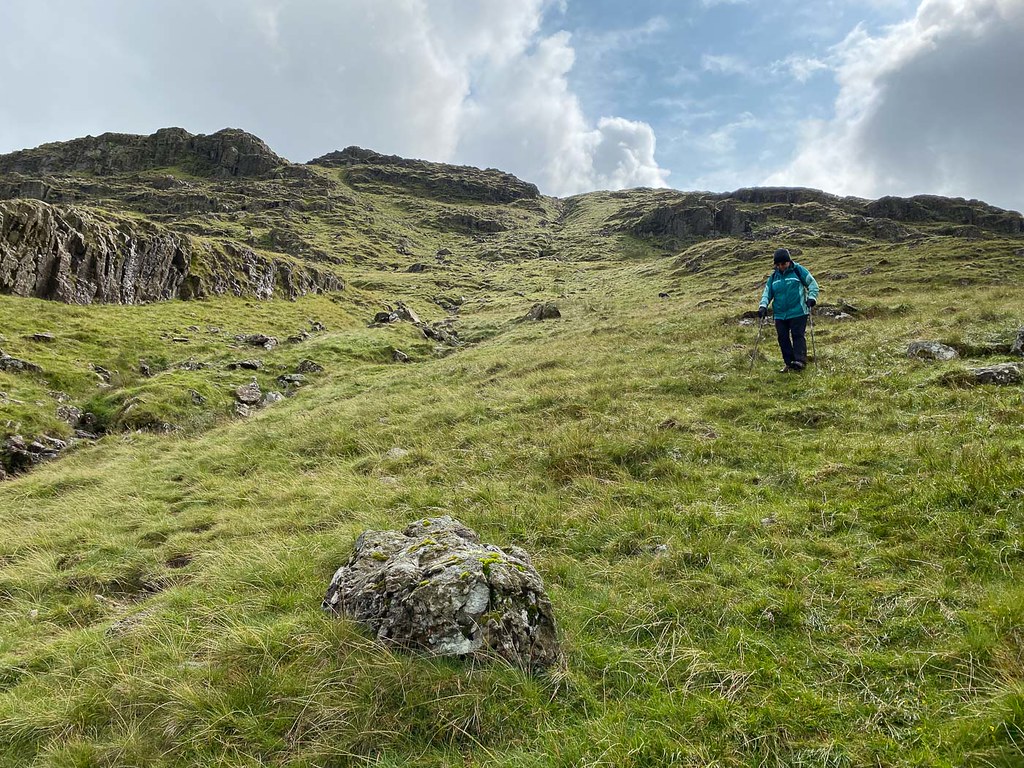 Coming down from Seathwaite Fell 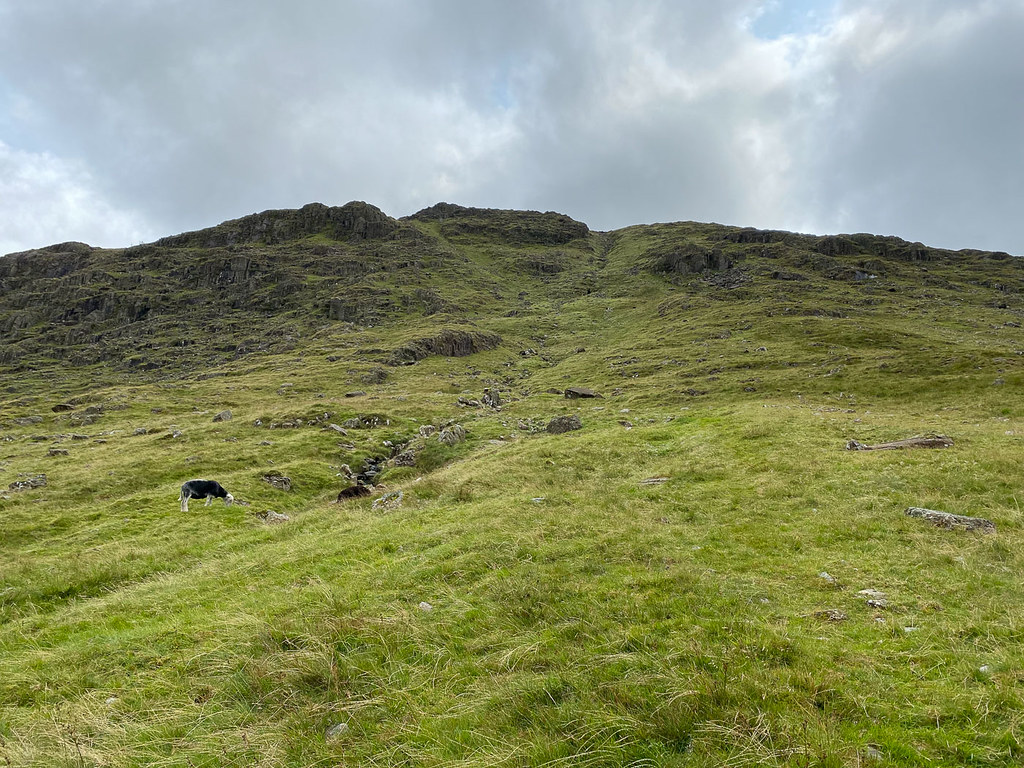 Looking back at the descent

The walk back once we got back to the Sty Head path was long and tiring - especially after the steep descent from Seathwaite Fell had left aging knees feeling weak. But we got back ok. I enjoyed the walk a lot, especially the bit from Sprinkling Tarn to the summit of Seathwaite Fell, and the route we took on the way up was a fine way to get there, with just the right gradients to get you up there without tiring you out.