It seemed rude, when staying at a hotel called Glaramara, not to climb the mountain it is named after, and today seemed like it might be the best bet for views during our stay, so we set off with the intention of climbing the Grains Gill path to Esk Hause then back down the Glaramara ridge, ticking off two new Wainwrights along the way.

It's been nice to be able to walk from the door every day so far this visit, even if that does mean we've become very familiar with the road between Seatoller and Mountain View. 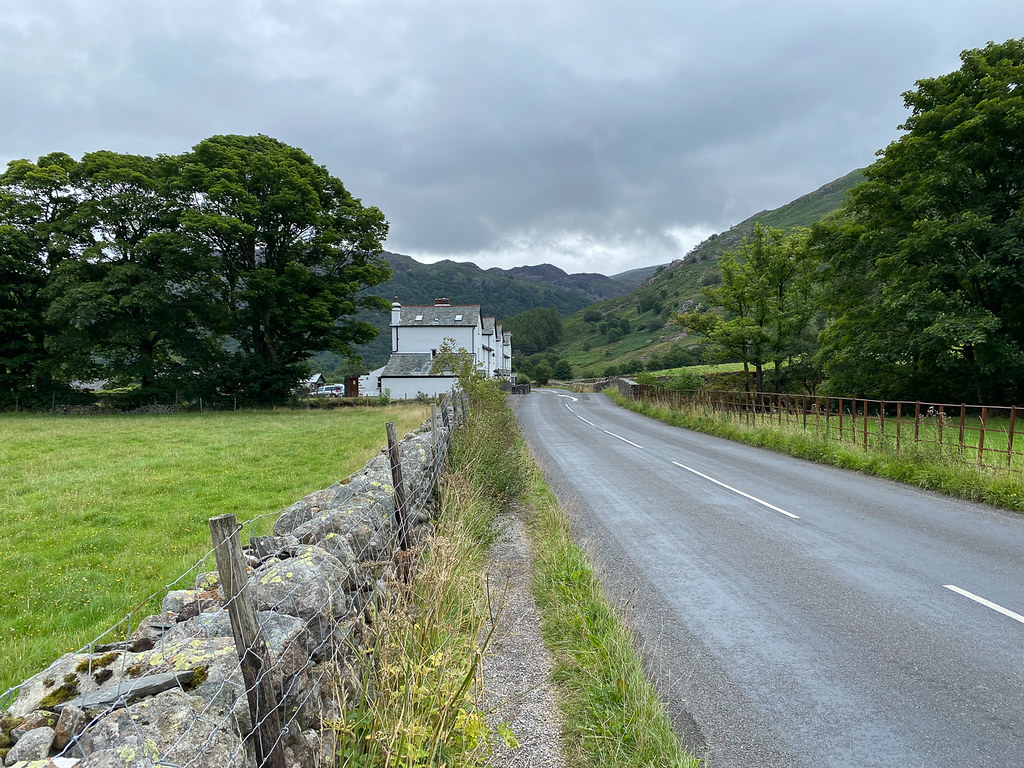 Along the road to Mountain View

The route started off by heading to Seatoller along the path through the fields past Thorneythwaite Farm. 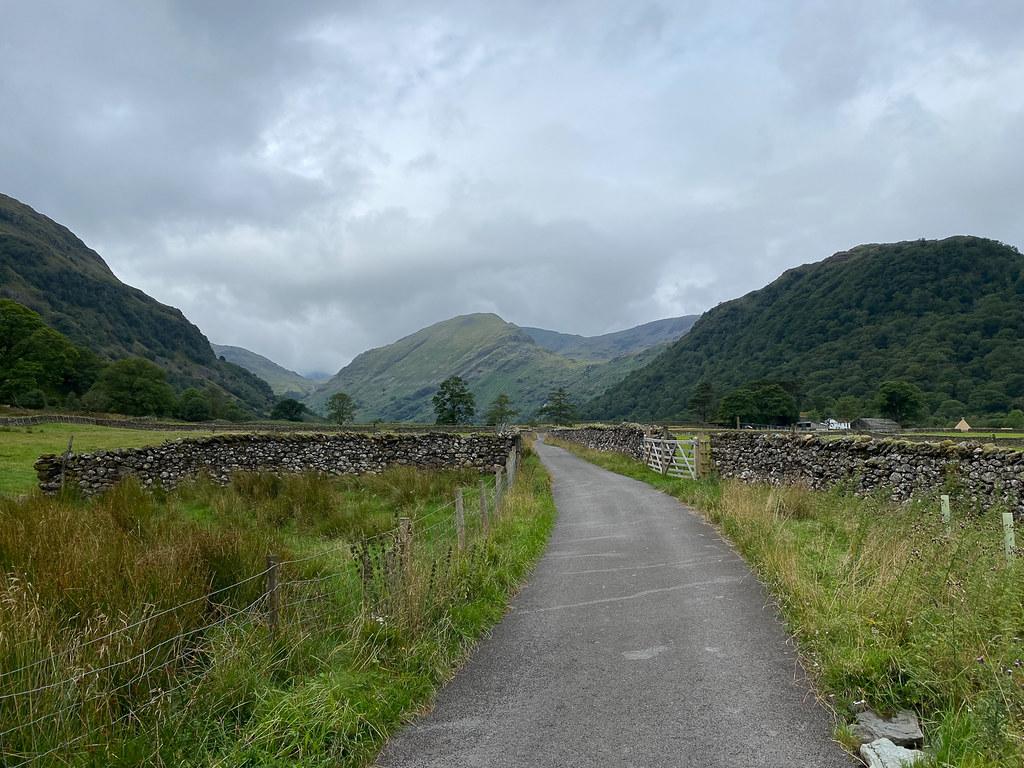 This path is very nice and quiet. 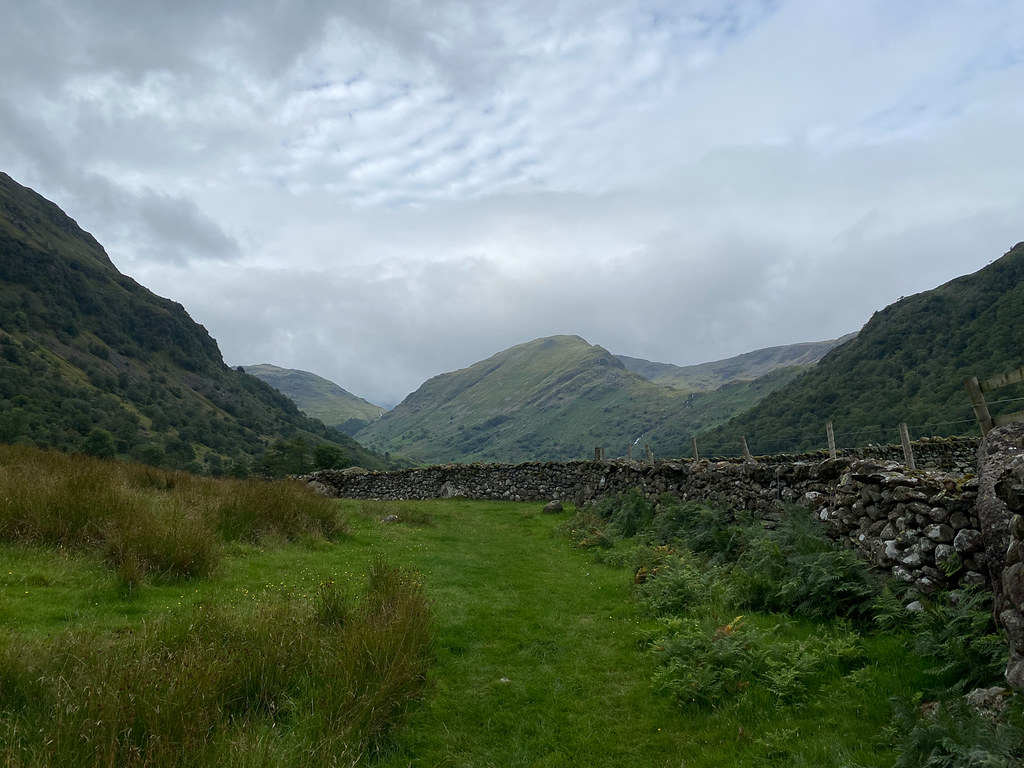 Path through the fields

Once we got to Seatoller the path became much busier. You'll have to take my word for it as I seem to have been expertly timing my photographs to avoid people in them... 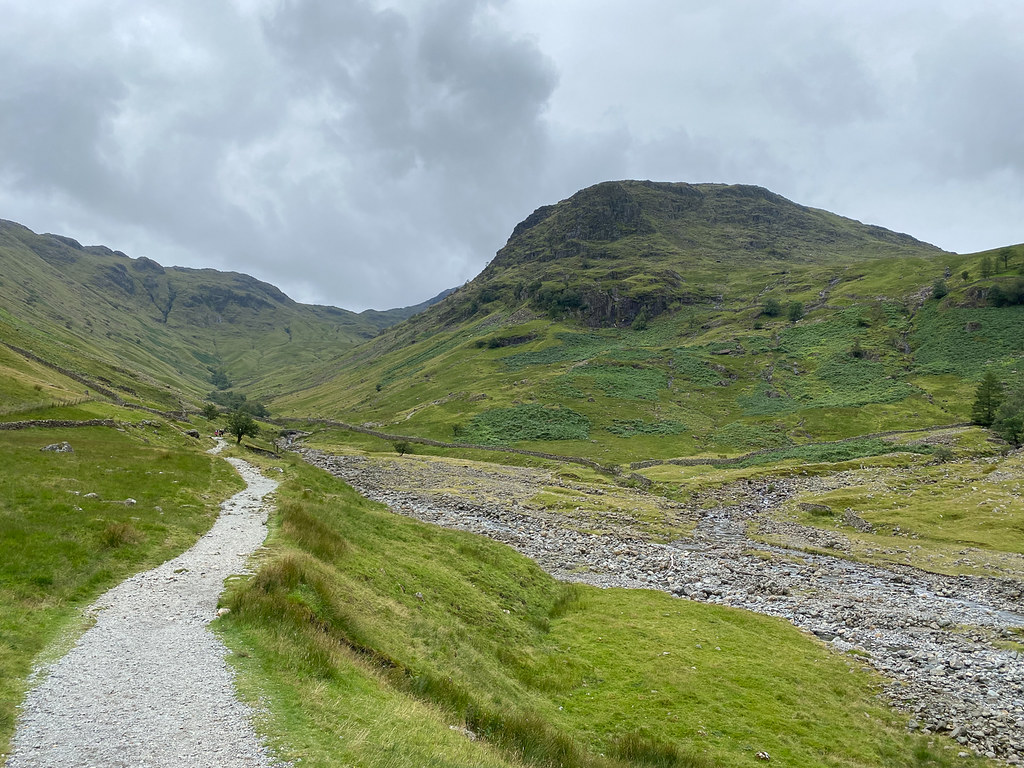 Stockley Bridge is an oddity - very well built but seems too narrow for vehicles to get over it, nor do the paths either side really seem passable even to quad bikes. Apparently it's an old packhorse bridge, dating back a few centuries, and a Grade 1 listed building. 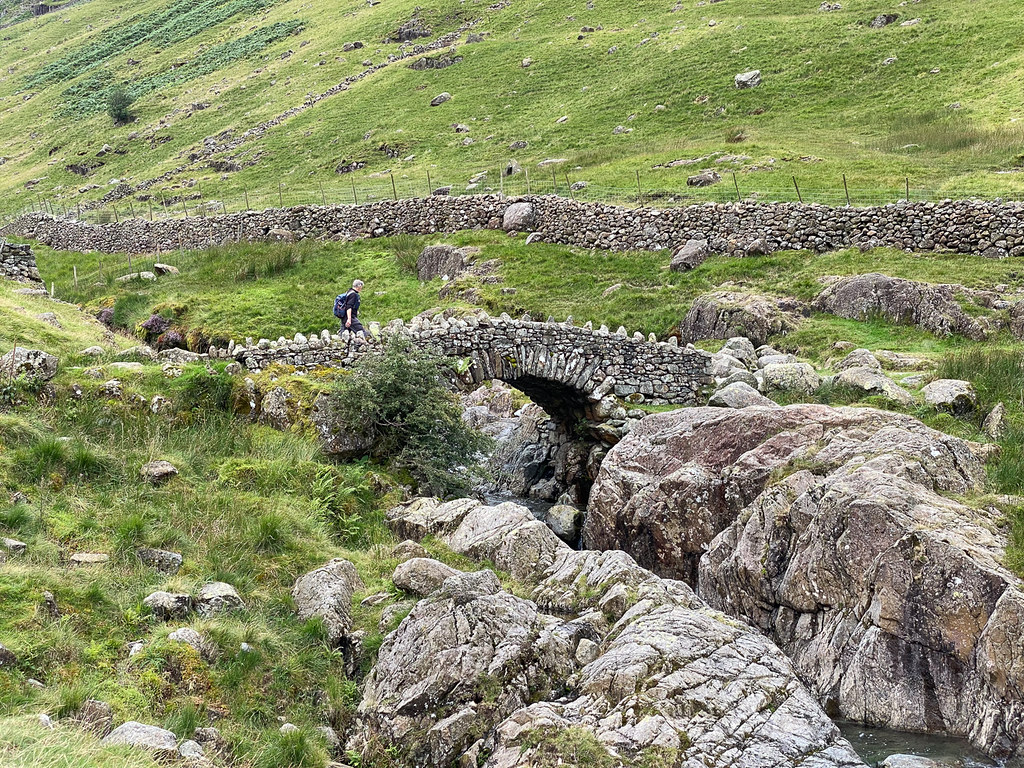 Whatever, it's very pretty, as are the views from it. 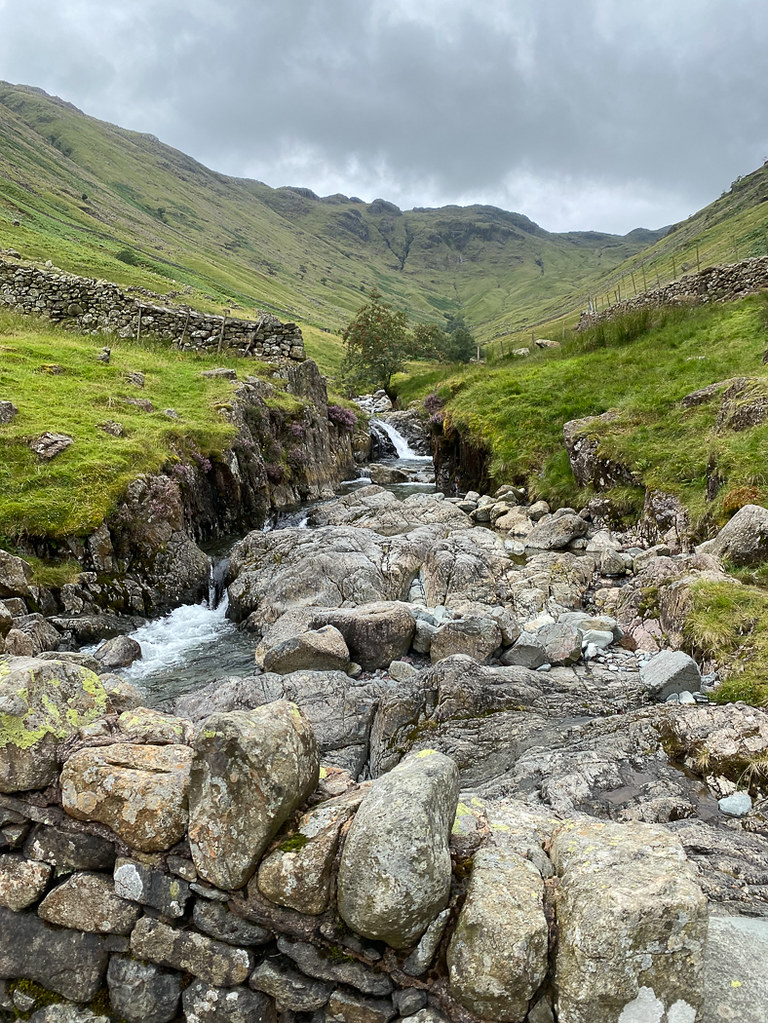 Immediately after the bridge we turned left up the Grains Gill path. Most of the traffic carried straight on towards Sty Head, but there were still quite a lot of people on this path - not like yesterday where we had the fell to ourselves on Rosthwaite Fell. 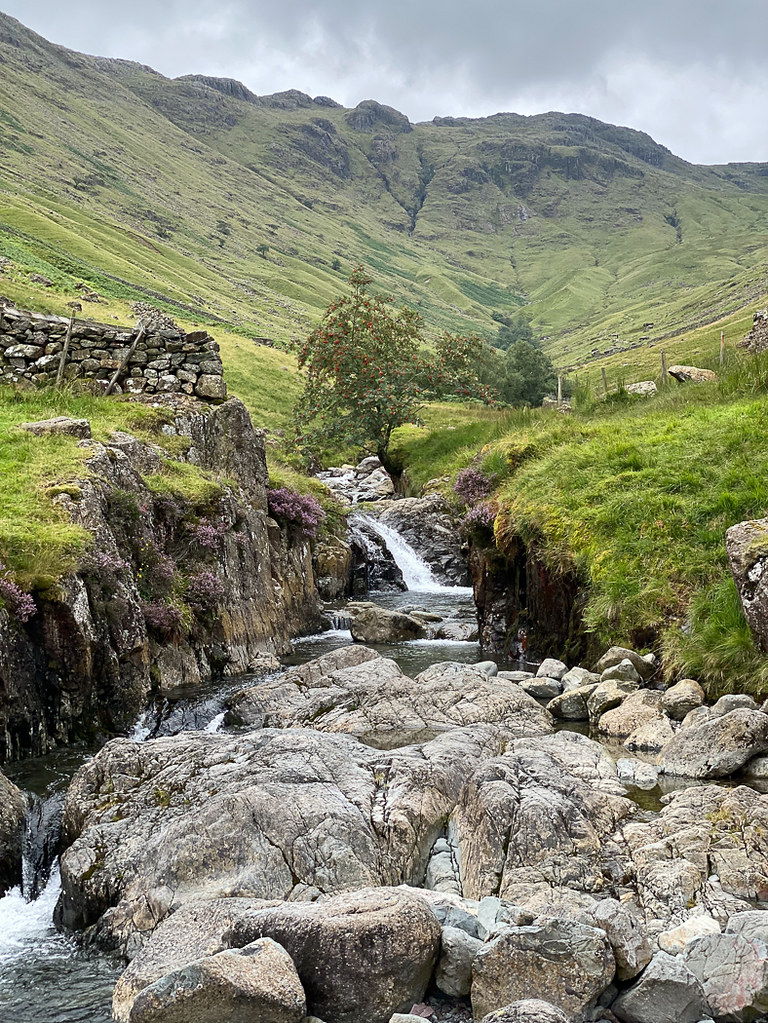 The Grains Gill path is very pleasant walking, easy underfoot and a fairly gentle gradient so you gain height without it feeling like too much work. Nice views both ahead and behind all the way, with Great End teasing views both behind the clouds and behind Seathwaite Fell. At this point the cloud was still above the summits on the Glaramara ridge, so we were hopeful of some views. 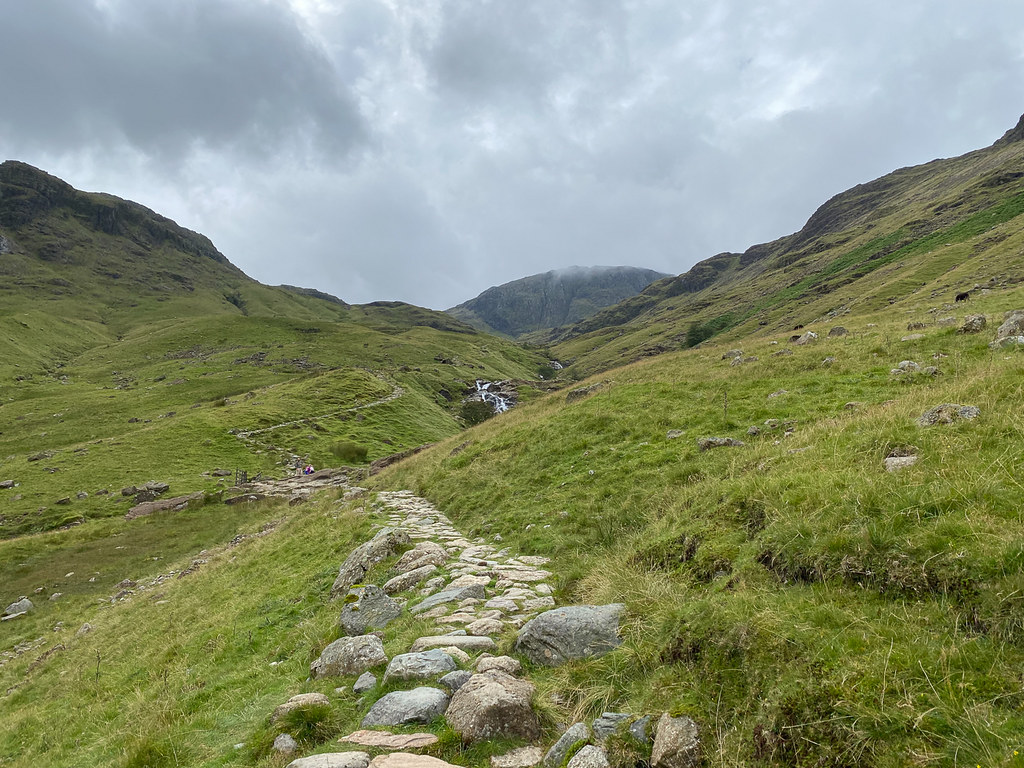 Great End at head of valley 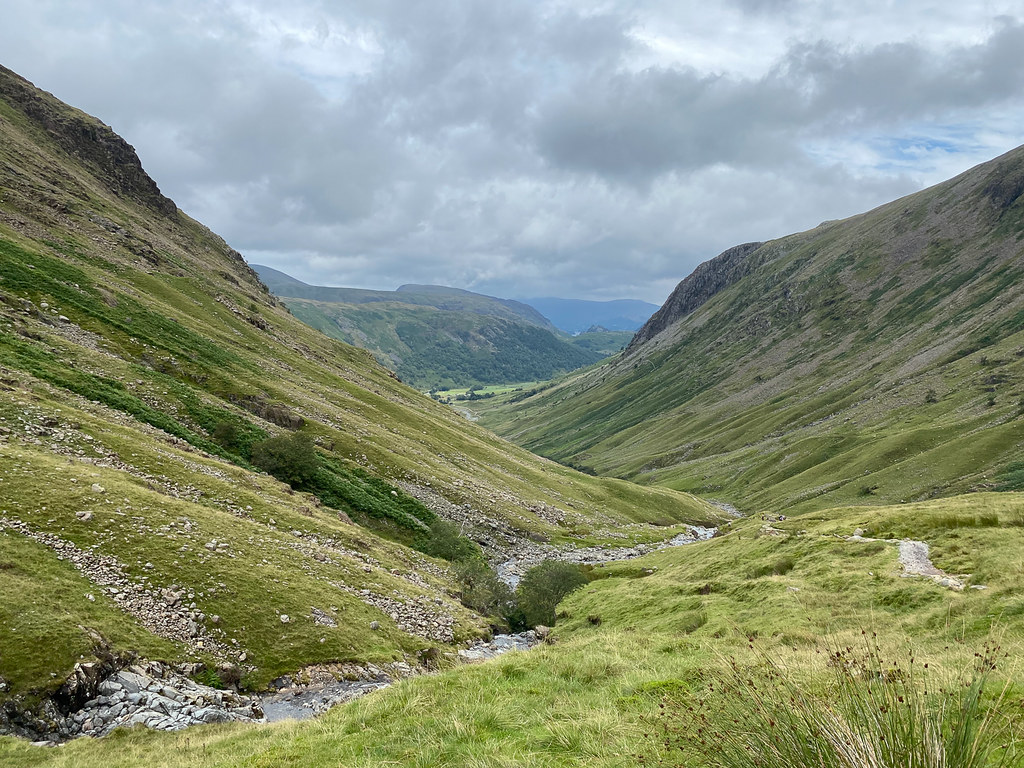 Looking down from Ruddy Gill 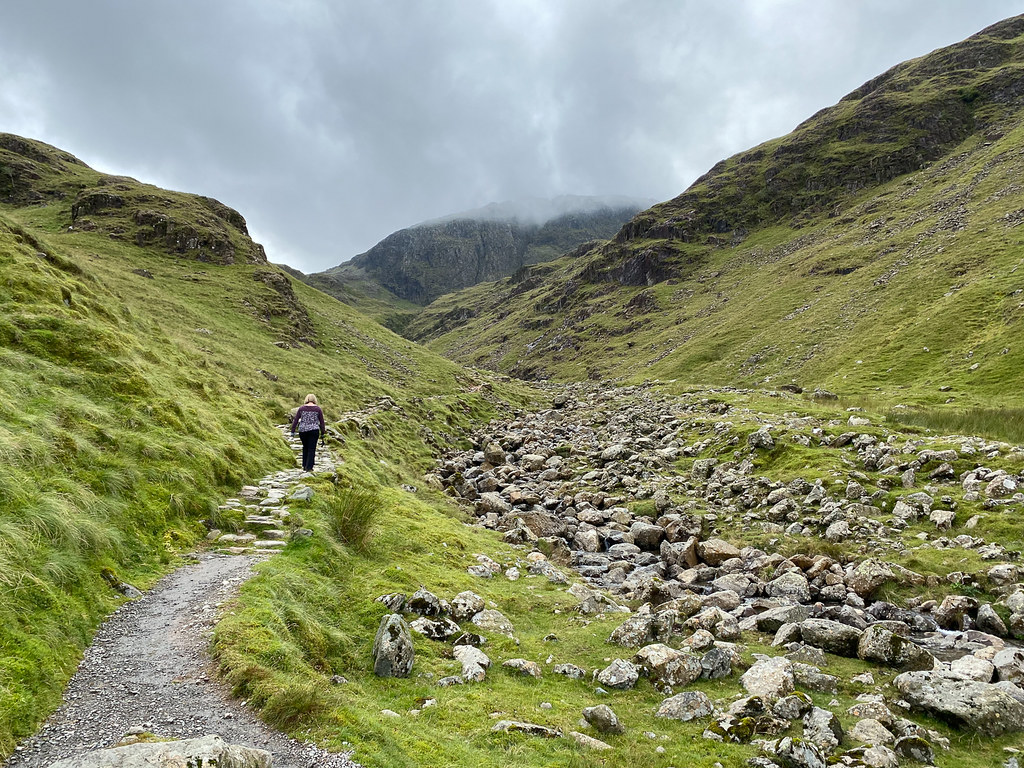 We had thought about cutting the corner of Ruddy Gill off, but the path to do so apparently no longer exists - and anyway the Ruddy Gill path was very pleasant. 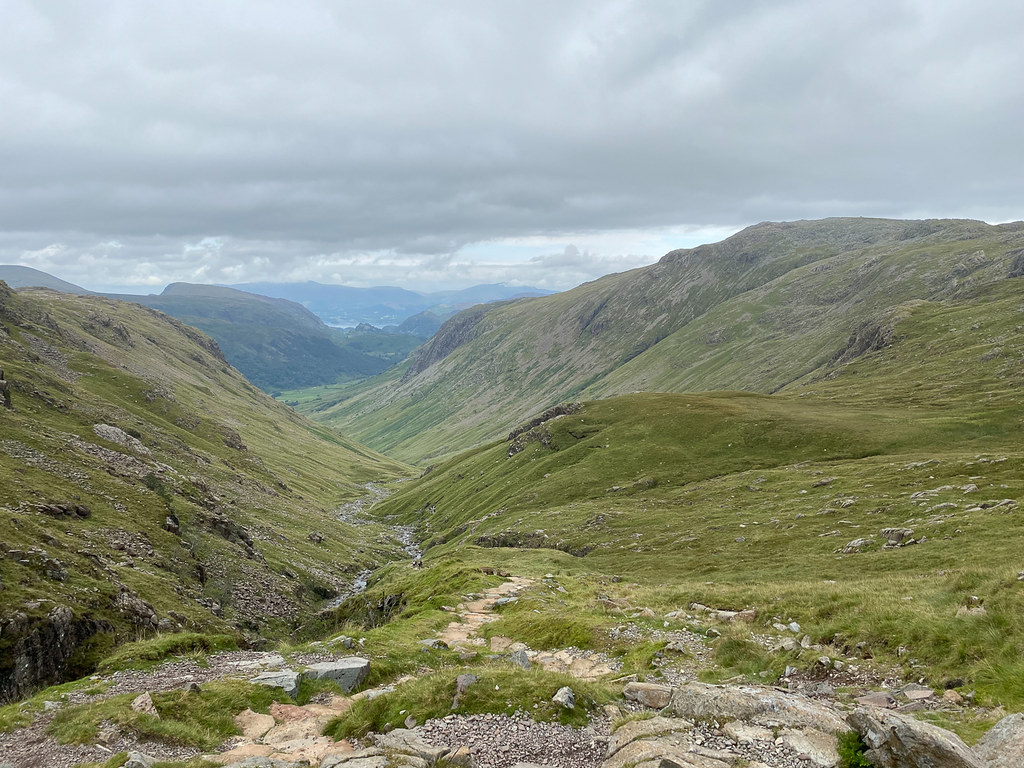 Down the valley from Ruddy Gill 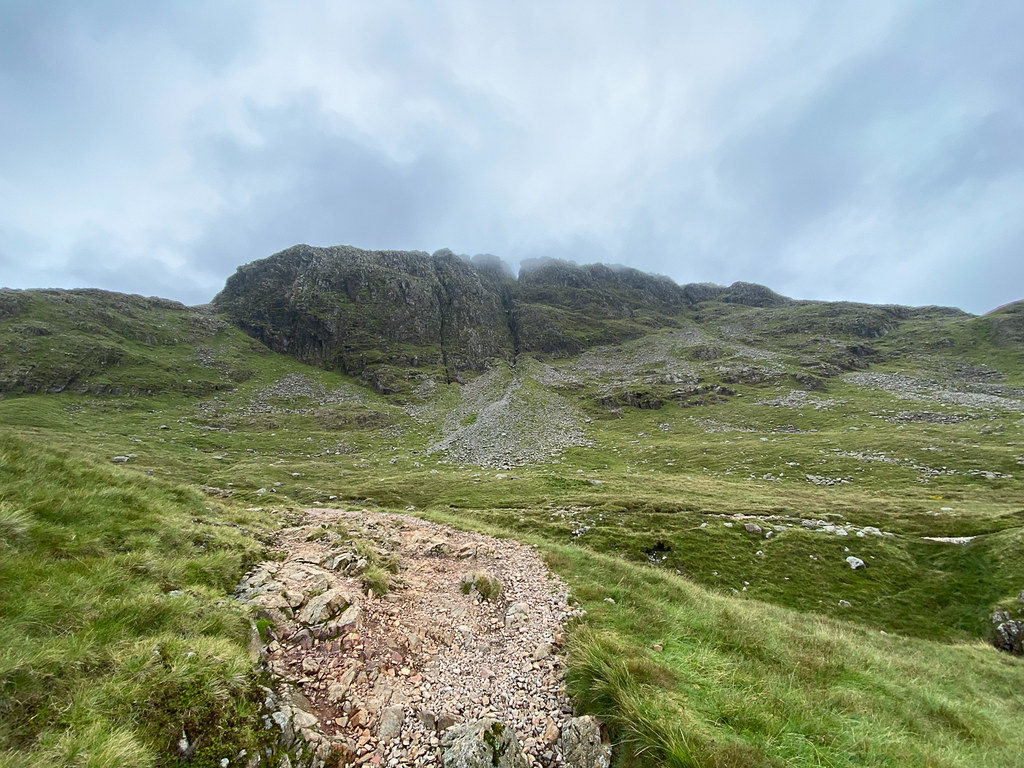 According to Wainwright the crossing of Ruddy Gill at this corner can be tricky if the stream is in spate - but today it was simple enough. 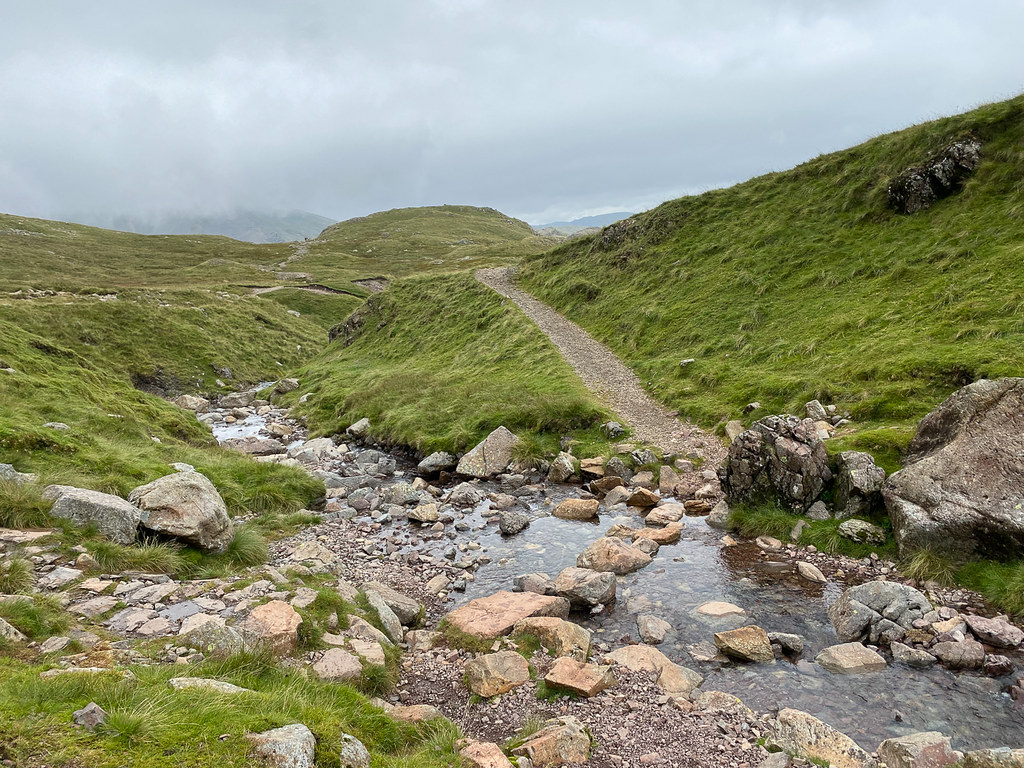 From here a gentle gradient led us up to Esk Hause, and suddenly there were views over Windemere and the Langdales (and the first phone signal for days...) 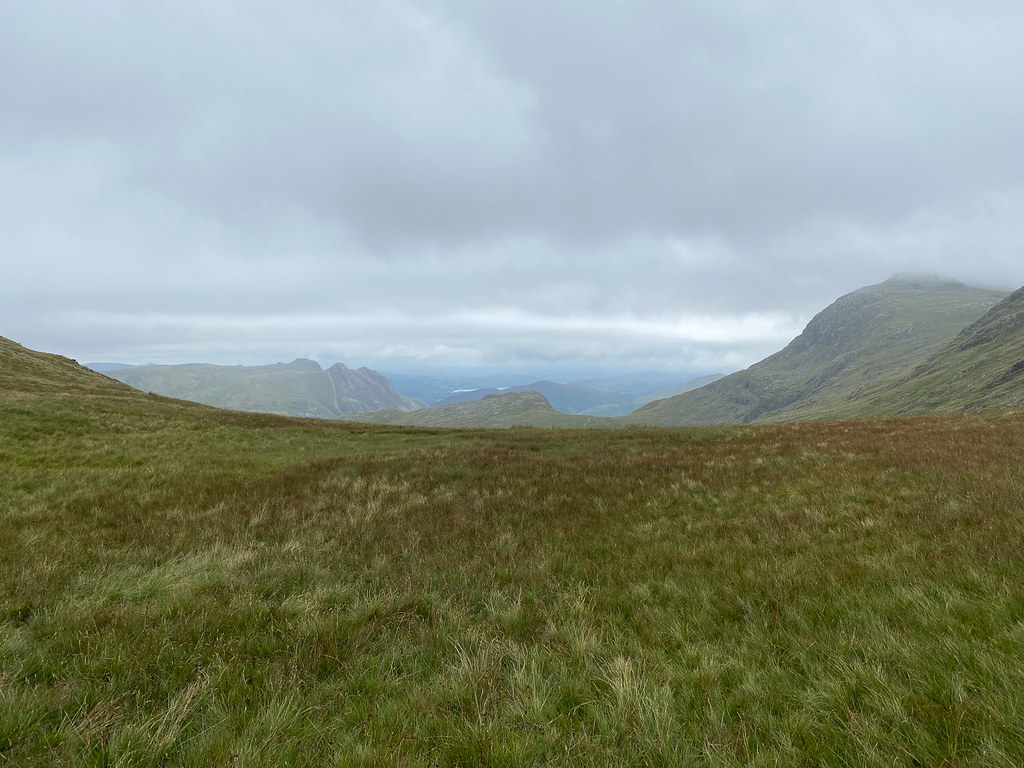 From there it's a short easy climb up to the summit of Allen Crags, where everyone seemed to have decided to stop for lunch. We found a free, sheltered spot and did the same, 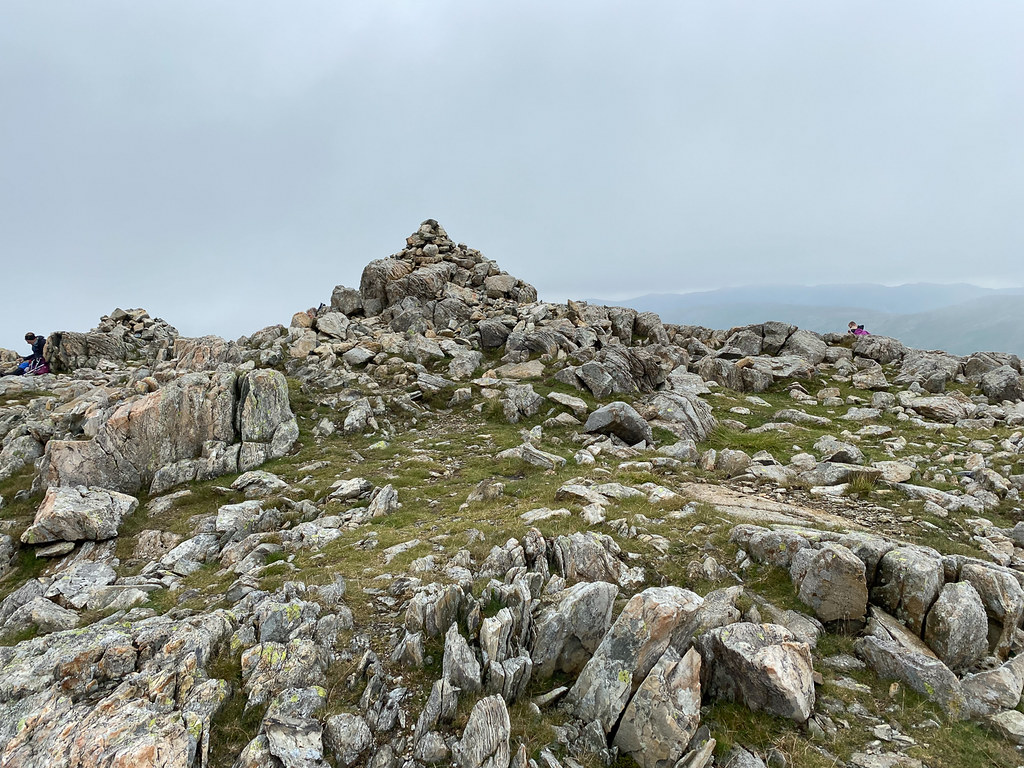 No views to the west due to cloud, but some nice views to be had eastwards.

The route down the Glaramara ridge from Allen Crags is not your typical ridge walk, with much more descent and re-ascent than might be considered ideal - but it was all easy enough going. Unfortunately the cloud had descended by now and we were not getting any views. Some very pretty tarns though, many full of what my phone assures me is "bogbean". 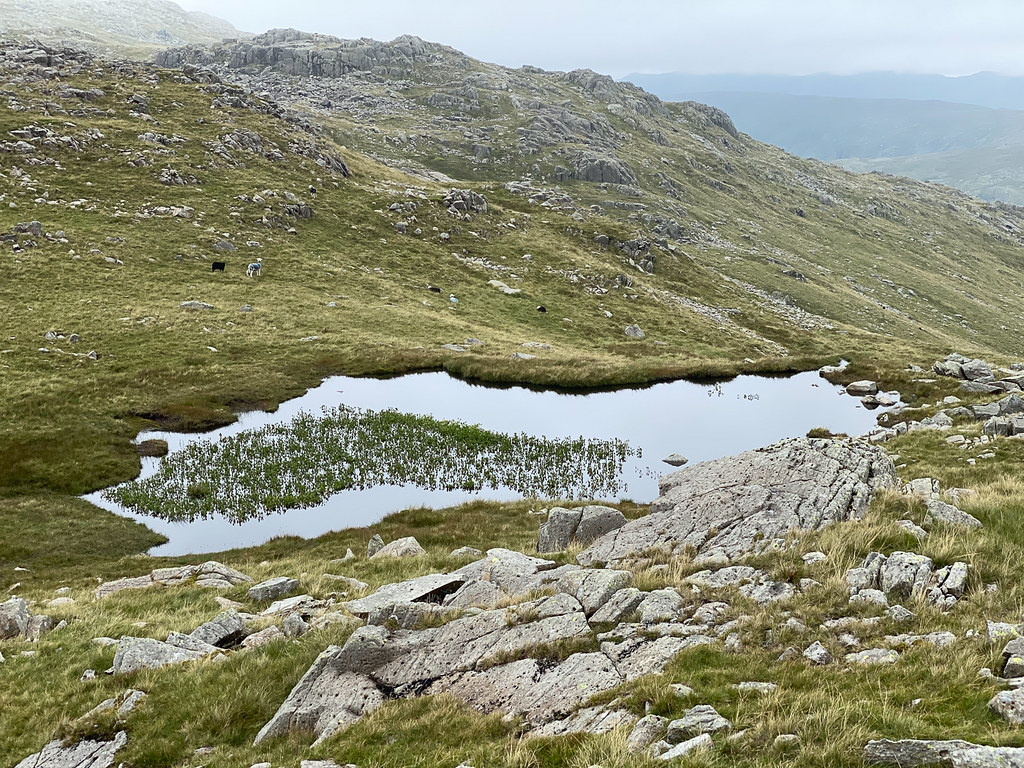 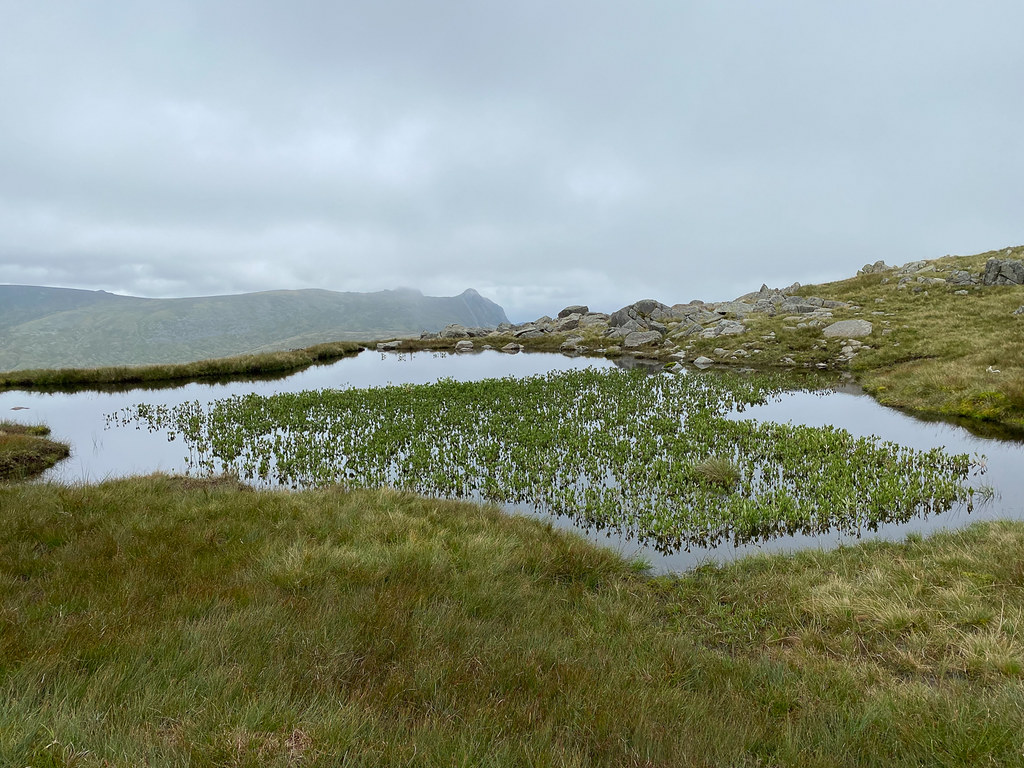 Another tarn with BogBean

Glaramara summit is quite confusing in the mist, with a secondary summit nearby, but we located the "Wainwright" top and a substantial wind shelter (shaped almost like a heart). 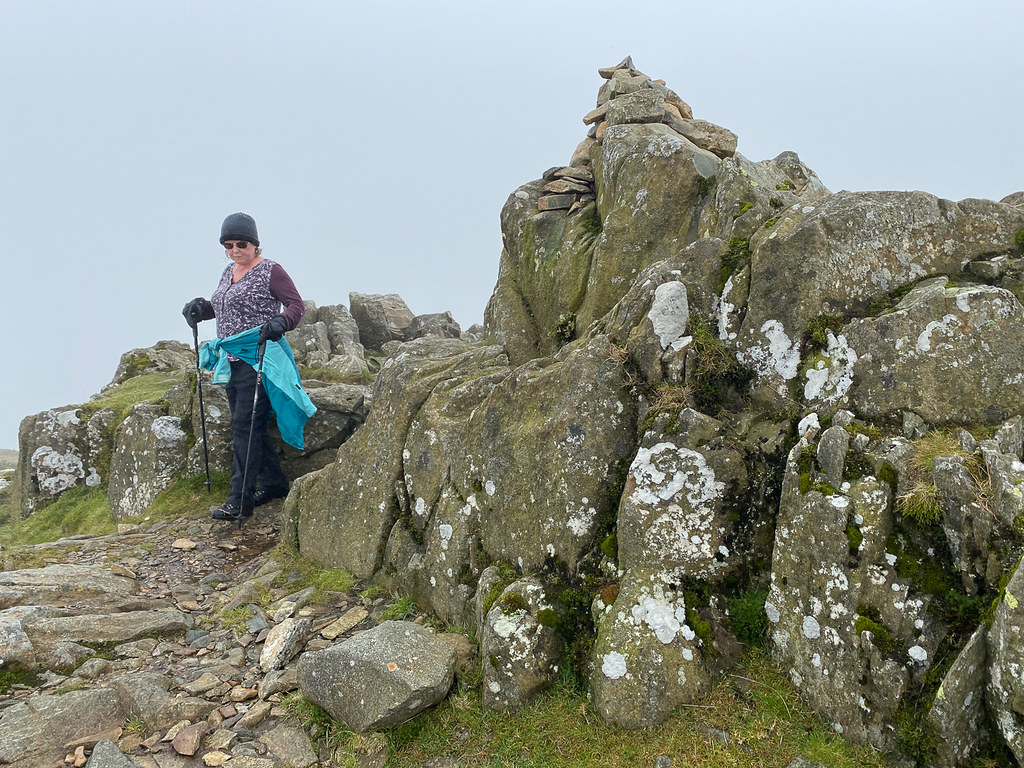 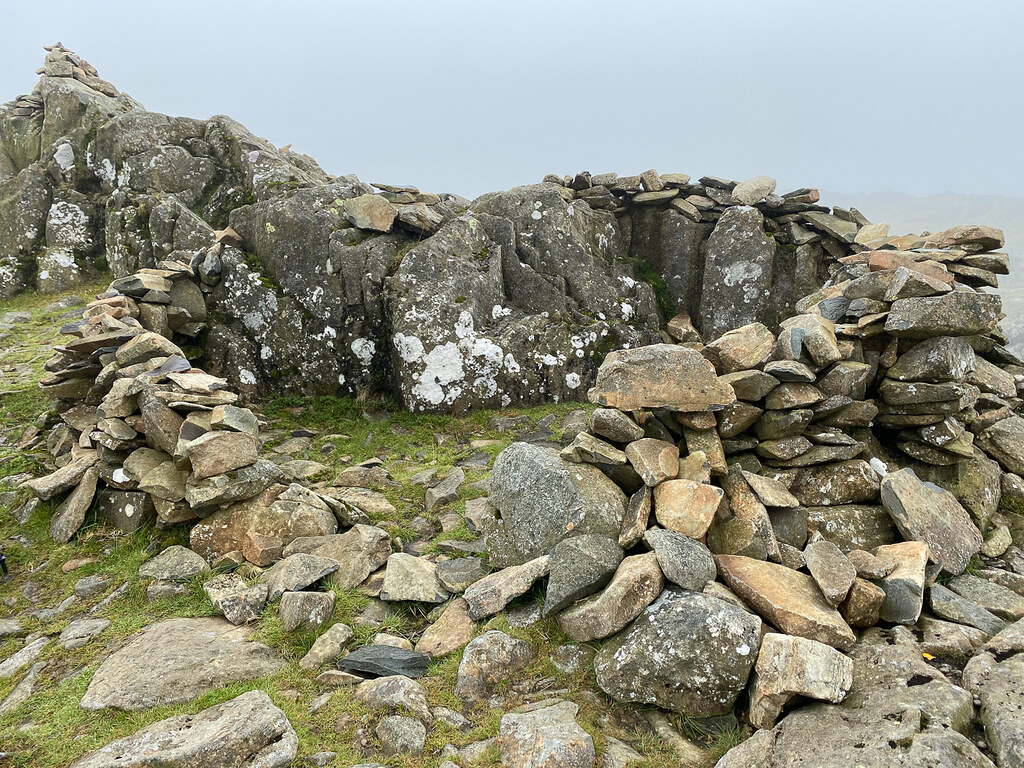 We didn't fancy the 20 foot scramble (Wainwright route 'B', not recommended to ladies in skirts - though I don't think I've ever seen any such thing on the fells) so we located instead the path to route 'A', and descended via a very clear and easy path over Thornythwaite Fell and back home. 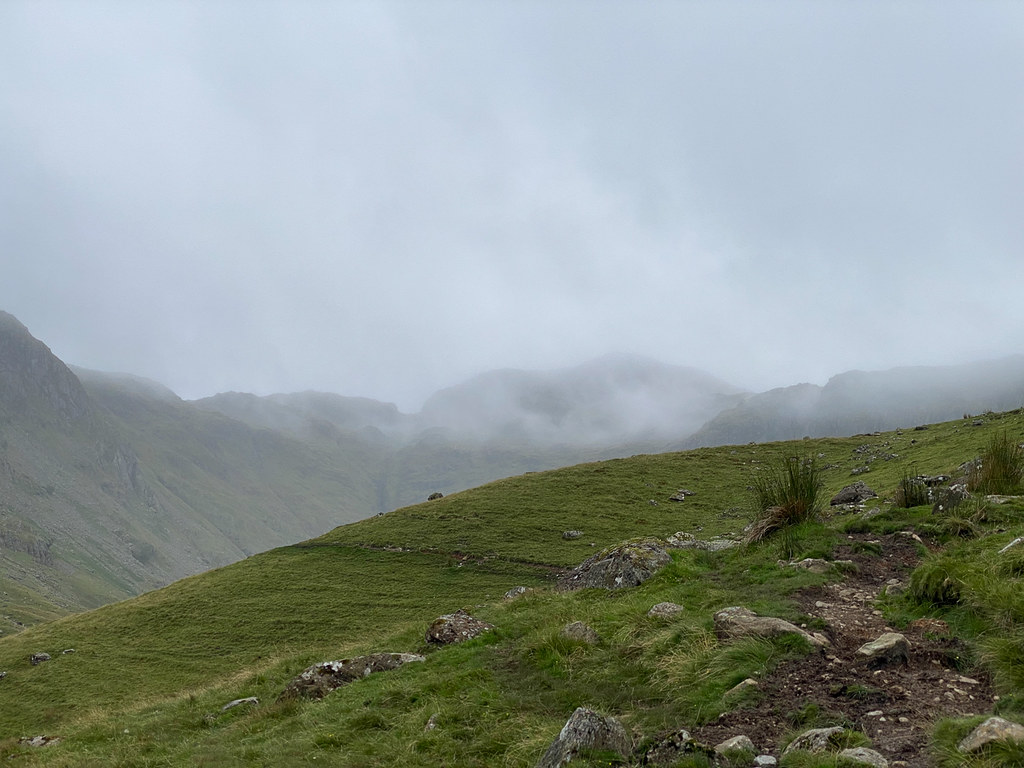 A rather longer walk than our first day's outing, and one that left us rather tired (we may be a little out of condition...) but satisfied. A shame that we missed out on the views that Glaramara is supposed to offer though.