Back among the little-visited hills on a Sunday when the forecast hill-fog was enough to steer you away from the higher summits. And - while it tickled the tops enough to prevent long views (and so to scupper any exciting photography...) - the cloud kept away enough for a decent day over some unusual terrain.

The first mile or so up from Abergynolwyn through the deciduous woods is delightful, a real contrast from the conifer plantations that so predominate in much of Snowdonia. It may be worth noting that the bridge to the station and the west bank of the Nant Gwernol (described in the Nuttalls' version of this route) is closed for the next couple of months, but it's hard to think that you lose anything by sticking to the lovely footpath along the east side of the tumbling stream. Before too long though, you're back on one of those easy but dull forest roads through the conifers...

The climb up from here to Tarrenhendre's NW ridge is much the hardest part of this route - this isn't easy to spot on the ground, but you need to head for a clear notch on the ridge up to your right, just before the road swings from S to SE, and to expect a very steep and scrambly climb, at the moment also negotiating a lot of felled trees over the best route. Even after getting up the gully to the ridge, the climb on up to Tarrenhendre is steep and relentless, but that's then most of the ascent done for the day. After negotiating a little boggy patch around the summit, there's a really good undulating path to follow along the top of the ridge between the two main Tarrens. Despite the fairly clear treads beneath your feet, this area feels very wild and remote - more so than I can remember anywhere else. There are plenty of Welsh hill walks when you meet almost no-one else, but today it would somehow have felt a real shock to have done so...

After that though, probably worth a warning that, while on the 1-25k map there seems to be a path cutting through the forest between the clearing at the foot of Foel y Geifr and the Tarren y Gesail col, it should definitely be avoided. At best, it's very faint, uneven and heathery; at worst it's a hack through almost impenetrable forest. From the col, it's clear that you can follow the edge of the forest to Foel y Geifr and then drop down through a clear and easy break instead. The firm and grassy climb of Tarren y Gesail, while long and pretty steep, seemed a blessed relief after that thrash, especially as the mist started to evaporate above. 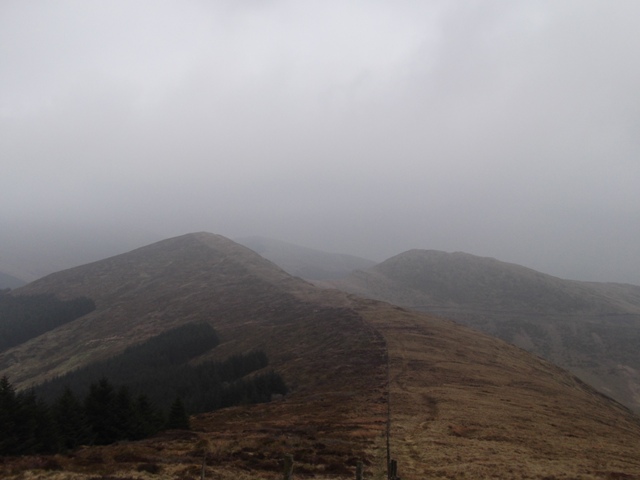 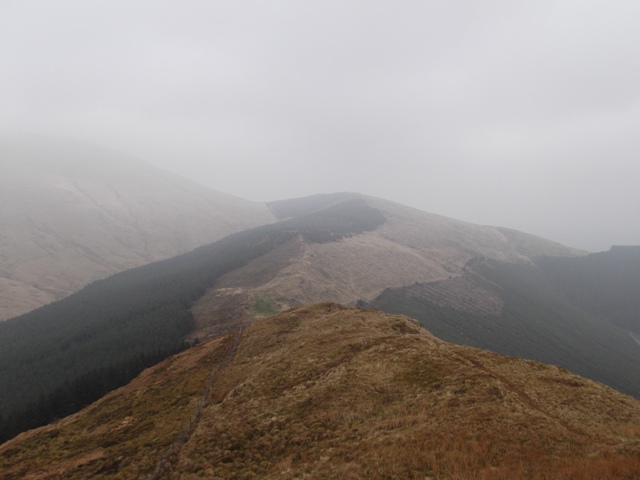 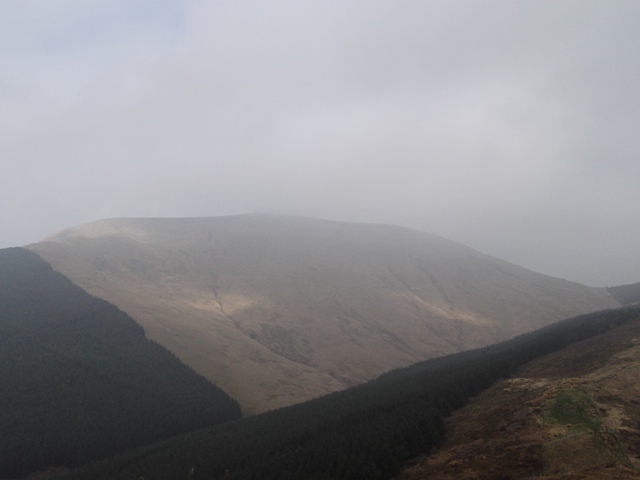 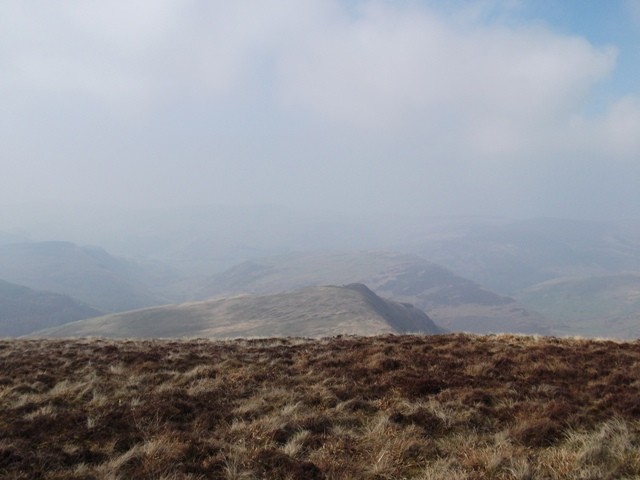 After a steep descent and a little bit of mud after the forest corner, good walking from here all the way back to Abergynolwyn, with more pleasant woodland around the old quarry and - on this day at least - the first really clear views across to the little hills on the other side of the pass. 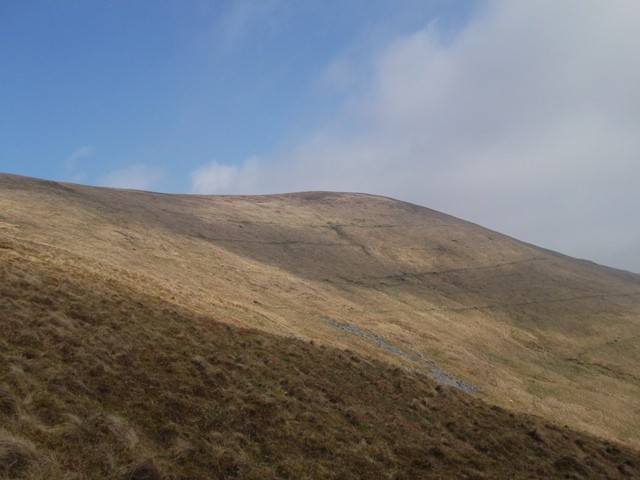 Back to Tarren y Gesail 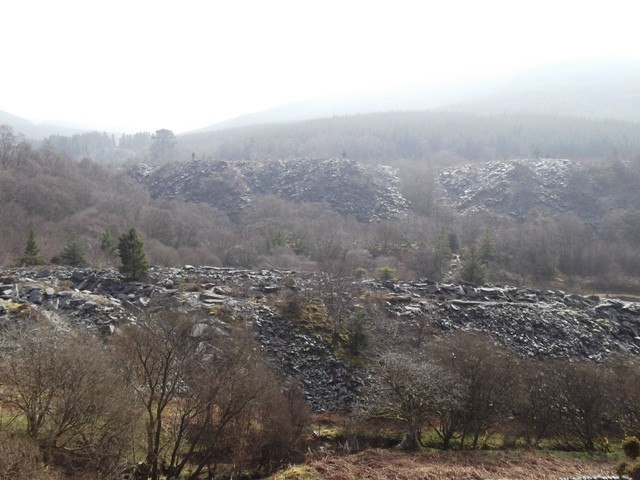 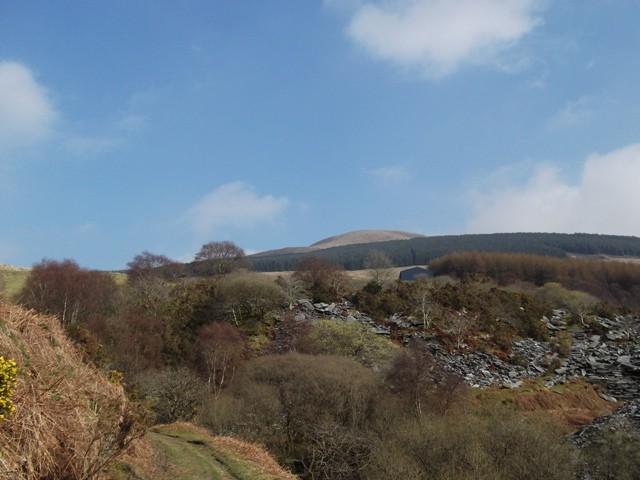 Tarren y Gesail over the quarry 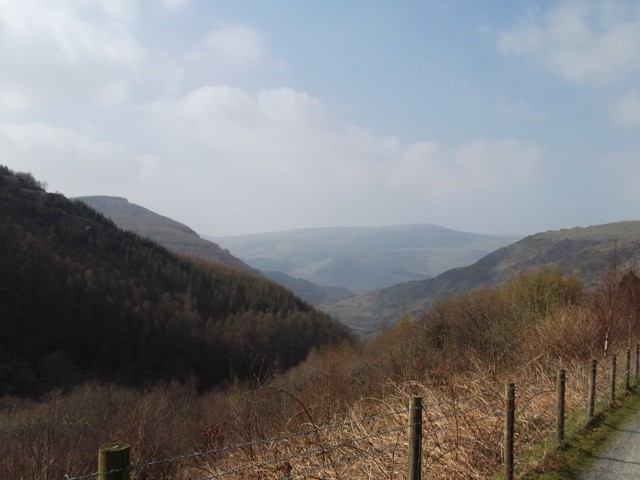 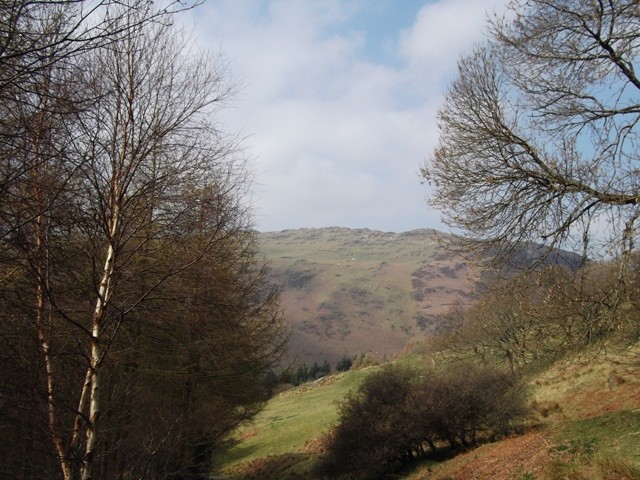 Overall, a pleasant and secluded walk. A little tougher than the low height of the two peaks would suggest, as the total ascent indicates - you start pretty close to sea level, and then there's a deep enough dip between the Tarrens - but nothing to really challenge.

Good report, poppeisrara. It's certainly whetted my appetite to do these two. There's something about these remote Welsh hills that appeals.

I like the look of this area,I will try and plan this one in for the coming year.Thanks for the report.

P, a great report there, you seem to have a habit of doing the hills im thinking of bagging

. Which is great because its like having your own recce team

tango wrote:P, a great report there, you seem to have a habit of doing the hills im thinking of bagging

. Which is great because its like having your own recce team

It's handy when someone does all the hard work for you!!! means you can lie back and think of ..... England

Great report and some real atmosphere in some of those pics