Another opportunity to get into the hills

so we thought a trip to do some of the outlying fells just off the M6 would fit the bill, for us they're easy enough to get to and a lot of the enjoyment involves discovering how unpopulated and remote parts of the Lake District remain, I'd never heard of Swindale before I started researching Wainwrights outliers

The weather was forecast to be cloudy but warm with rain moving in late afternoon, planning to be off the fells by 2pm this sounded ideal so it was off to Swindale to see what we could see from the tops

The little road from Shap to Rosgill and into Swindale is very quiet we met nothing travelling into or out of Swindale. There's a small parking area on the right just before Swindale Foot at around NY522142 there's no parking further on. 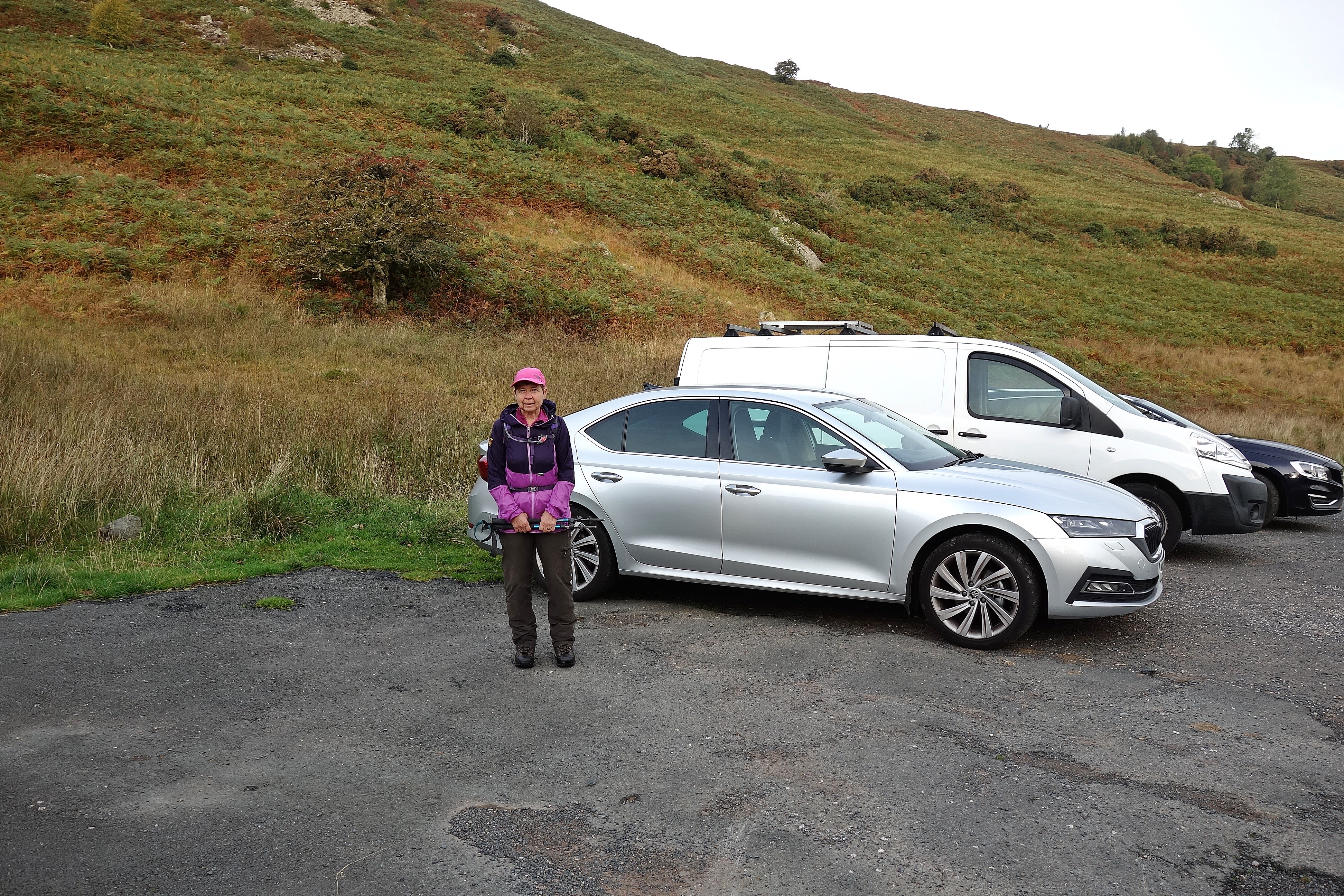 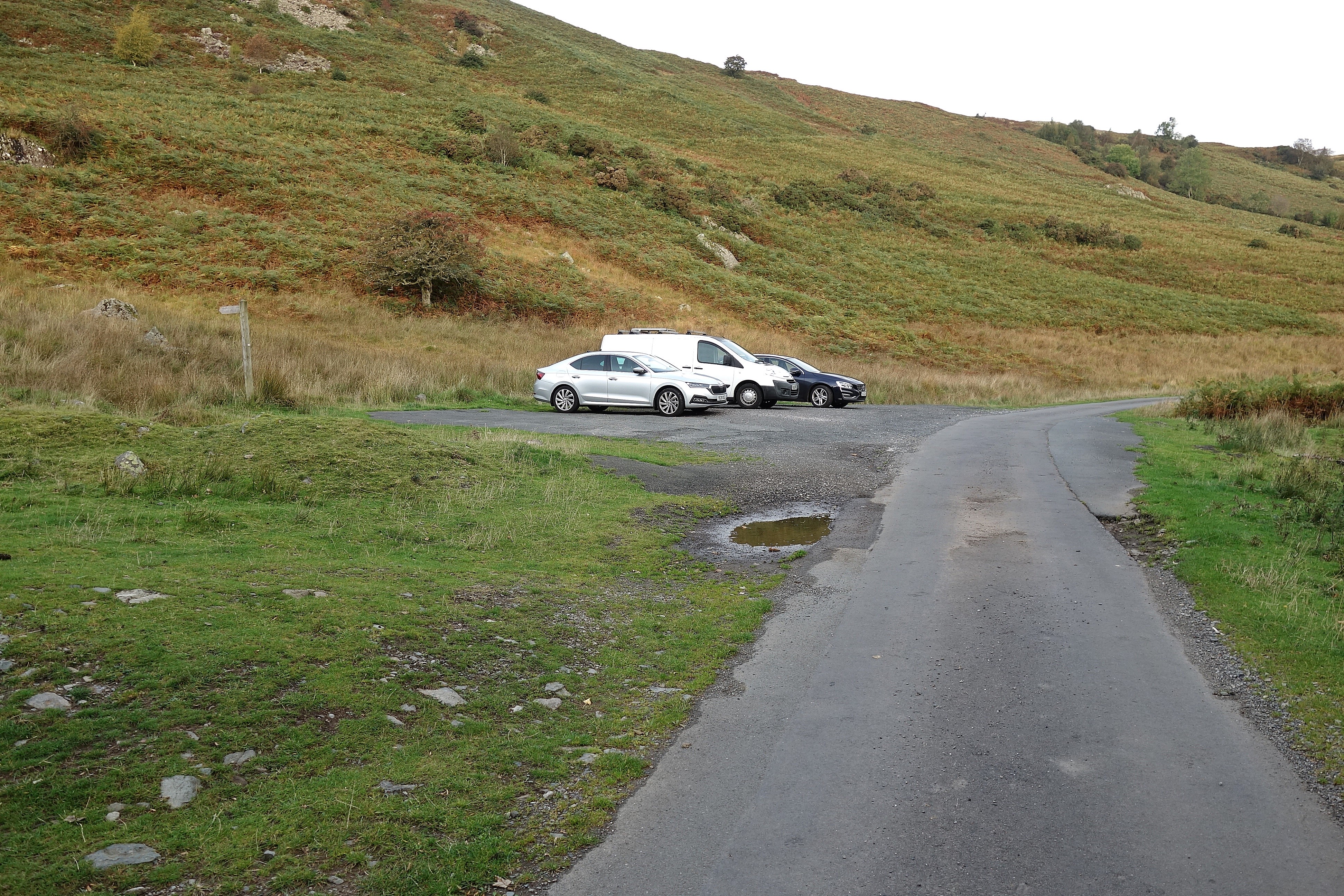 We got ourselves ready and were off walking towards Swindale Head and our first top, Nabs Moor. The weather was as forecast

Langhowe Pike on the other side of the Dale 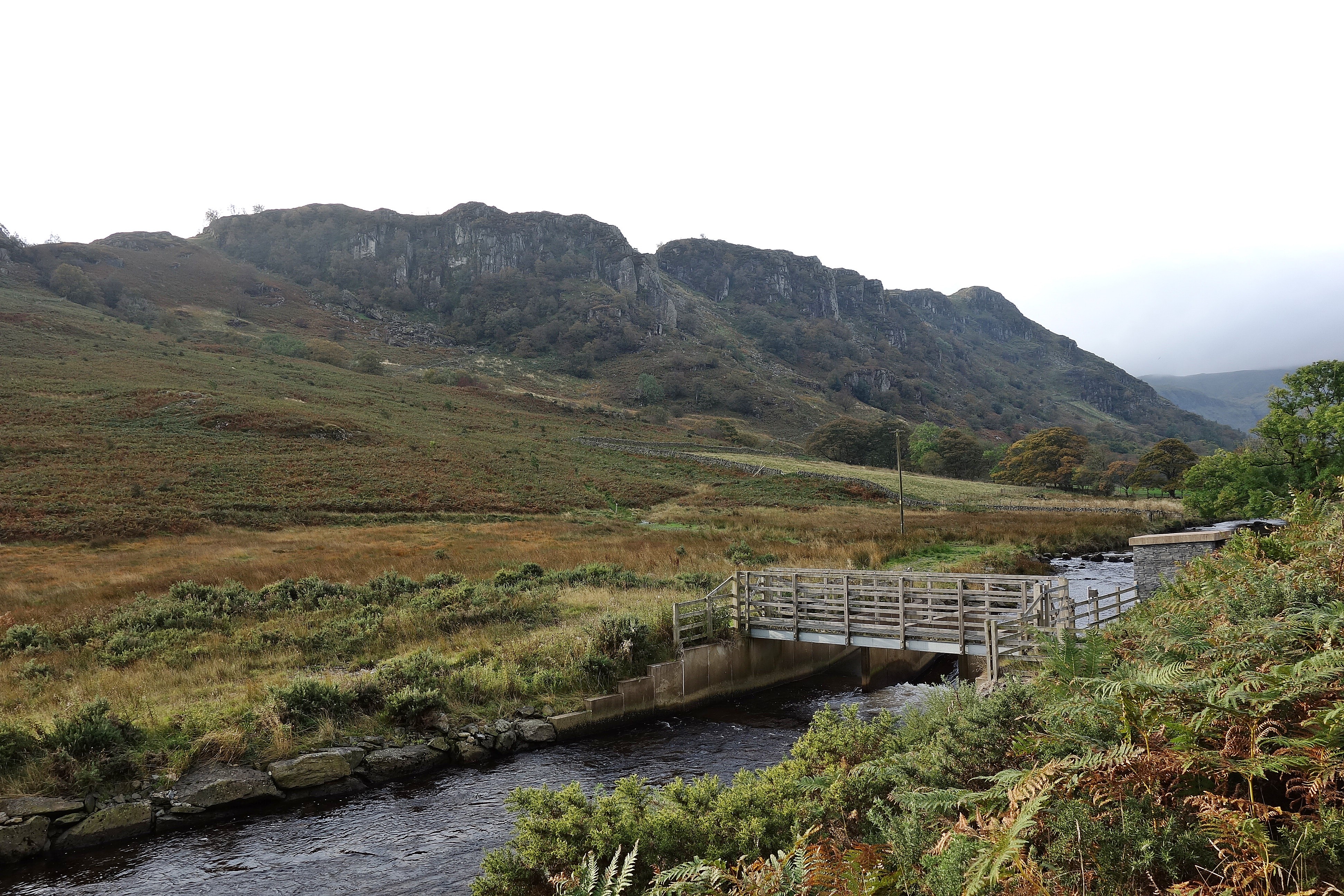 the only thing we weren't expecting was the lowering cloud base, Nabs Crag was clear but what we could see of the higher fells they were slowly disappearing 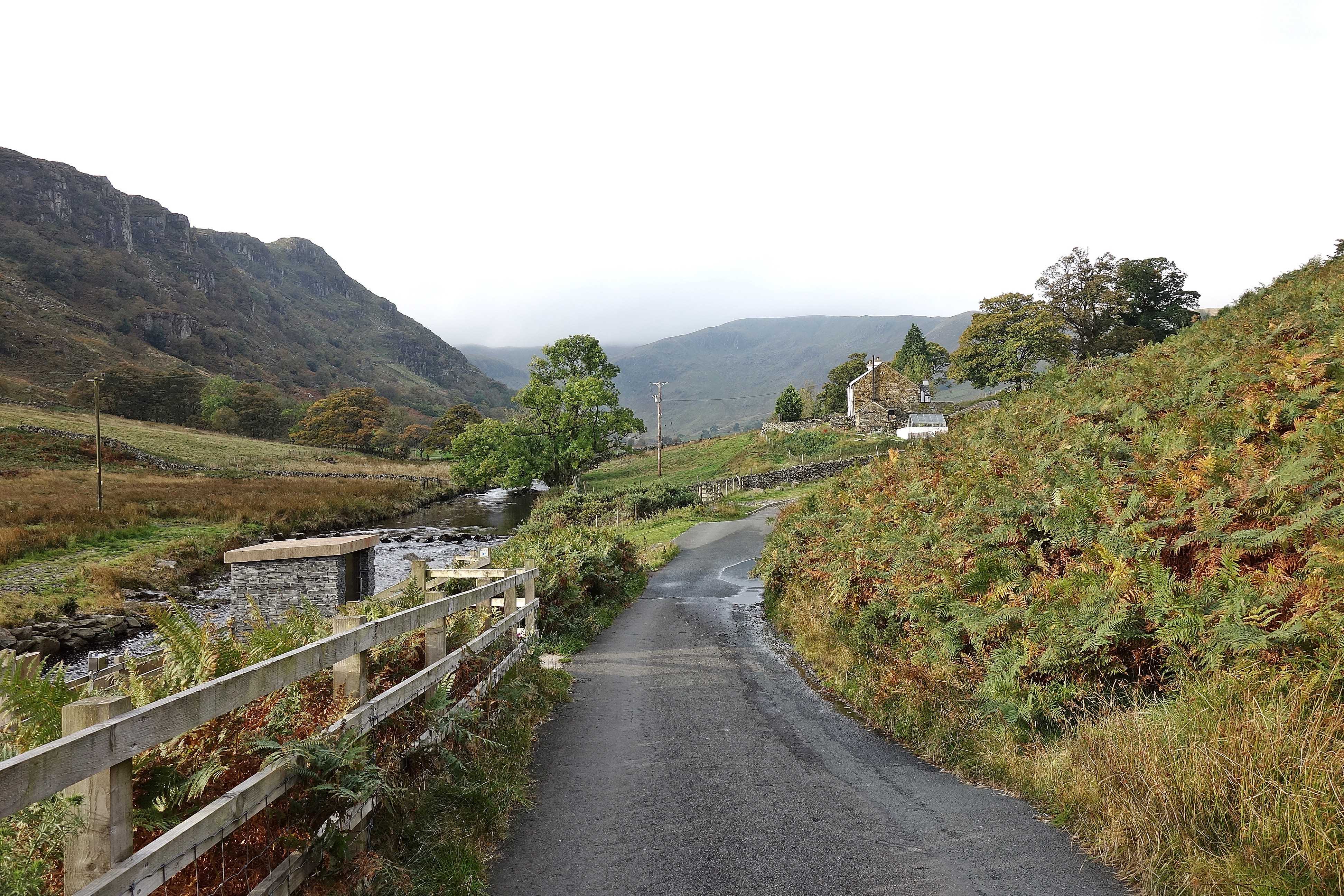 It's about 1.5 mls to Swindale Head from the parking, once there we picked up the Mosedale path to begin the climb towards Nabs Moor. To our left we could see Forces Falls, they had a lot of water in them so it must have rained a lot just recently, above us was Nabs Crag, now being bothered by cloud 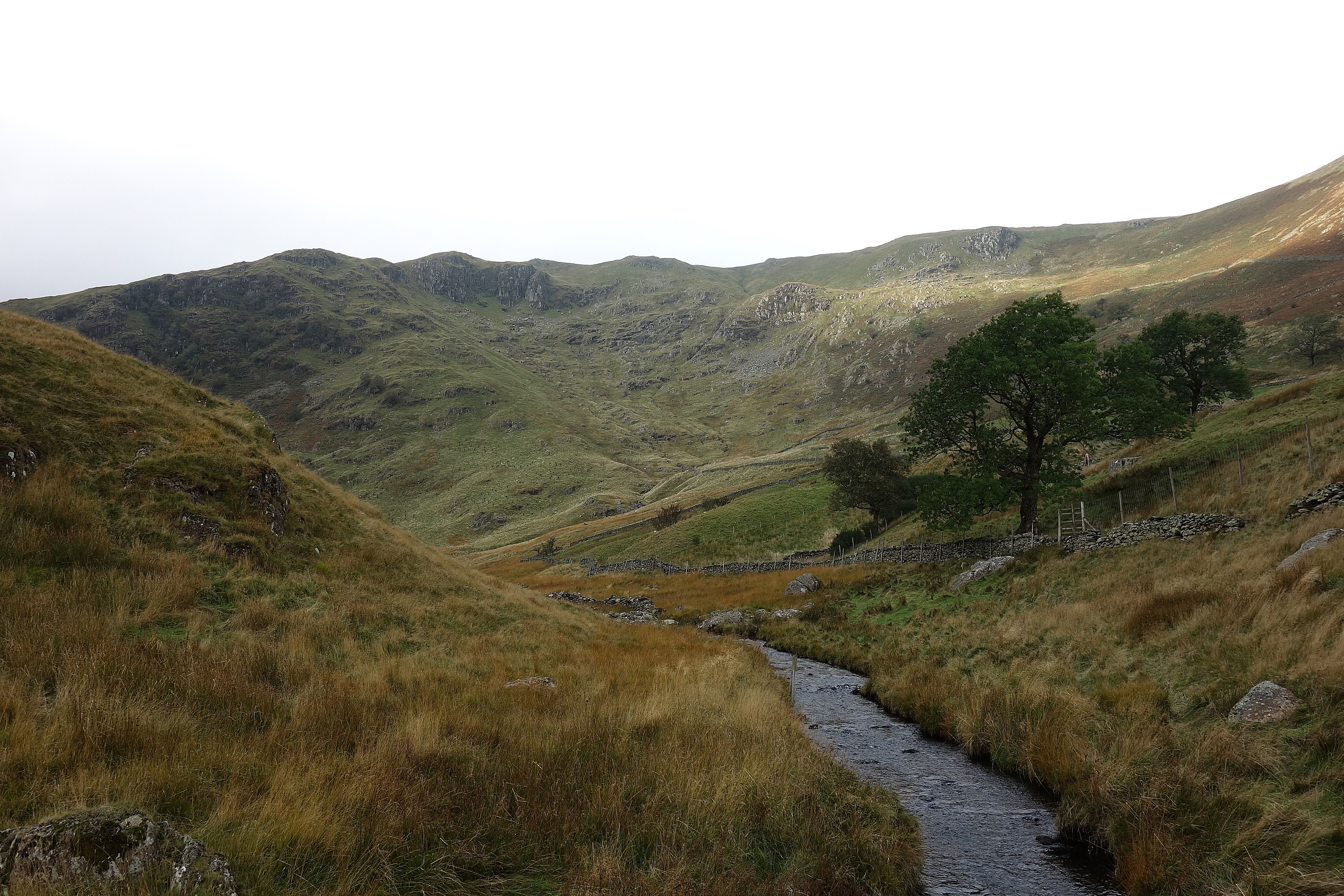 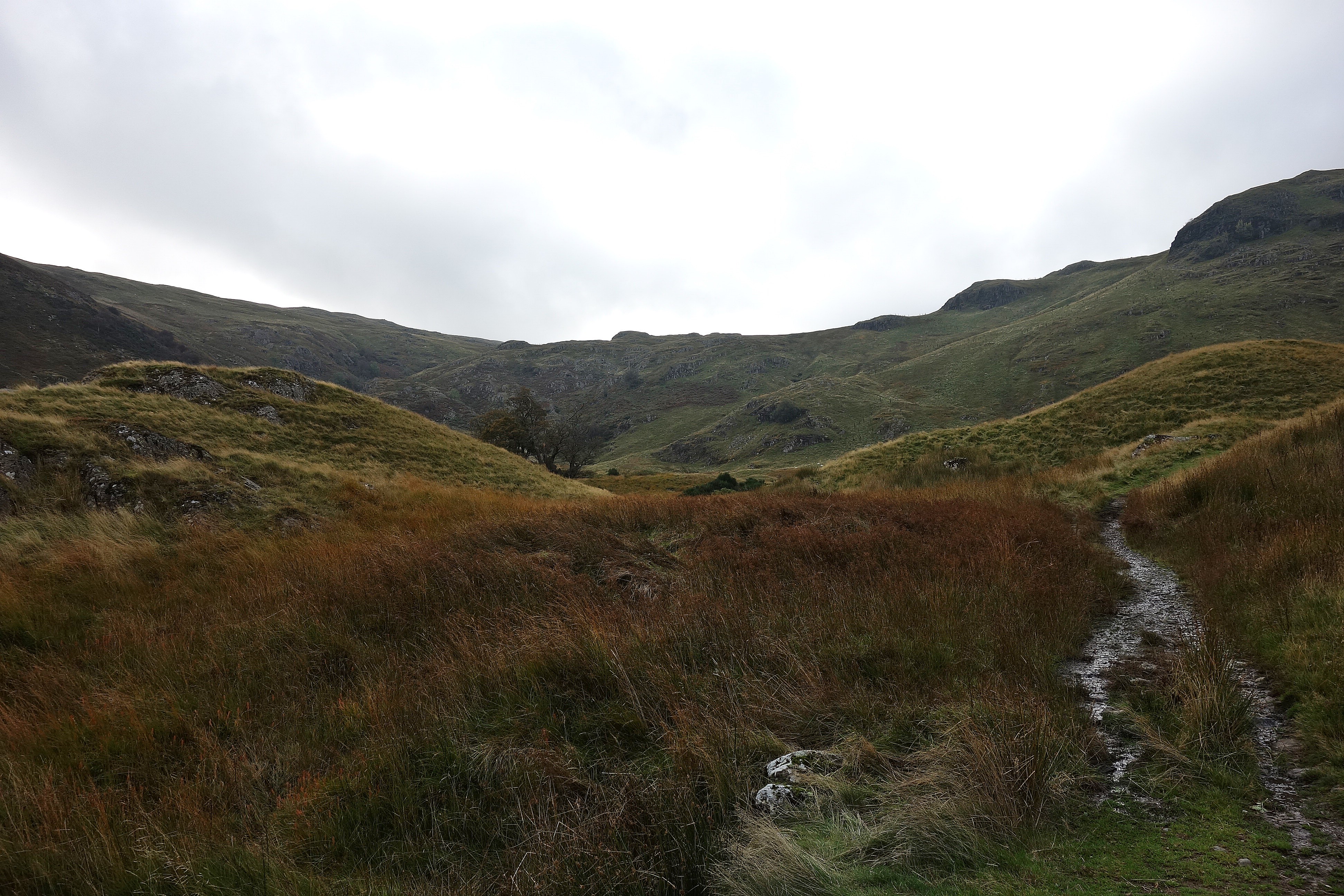 We left the main path at around NY506110 on a much smaller path heading up hill alongside Swine Gill, as we got higher we saw we were on the wrong side of the fence, we could also see a much better path on the other side of said fence so we should have stayed on the main path for a little longer

We were in the clag now and found our baring took us over lumps and bumps, no paths to speak of, we found the cairn but we weren't happy, we started to consider a retreat, the original plan was to go to Howes and then onto Selside via Captain Whelter Bog, we didn't fancy that now, there was a fair breeze, it had started to rain, much earlier than forecast and the clag was well down by now so we decided to look for Howes and then go back down, 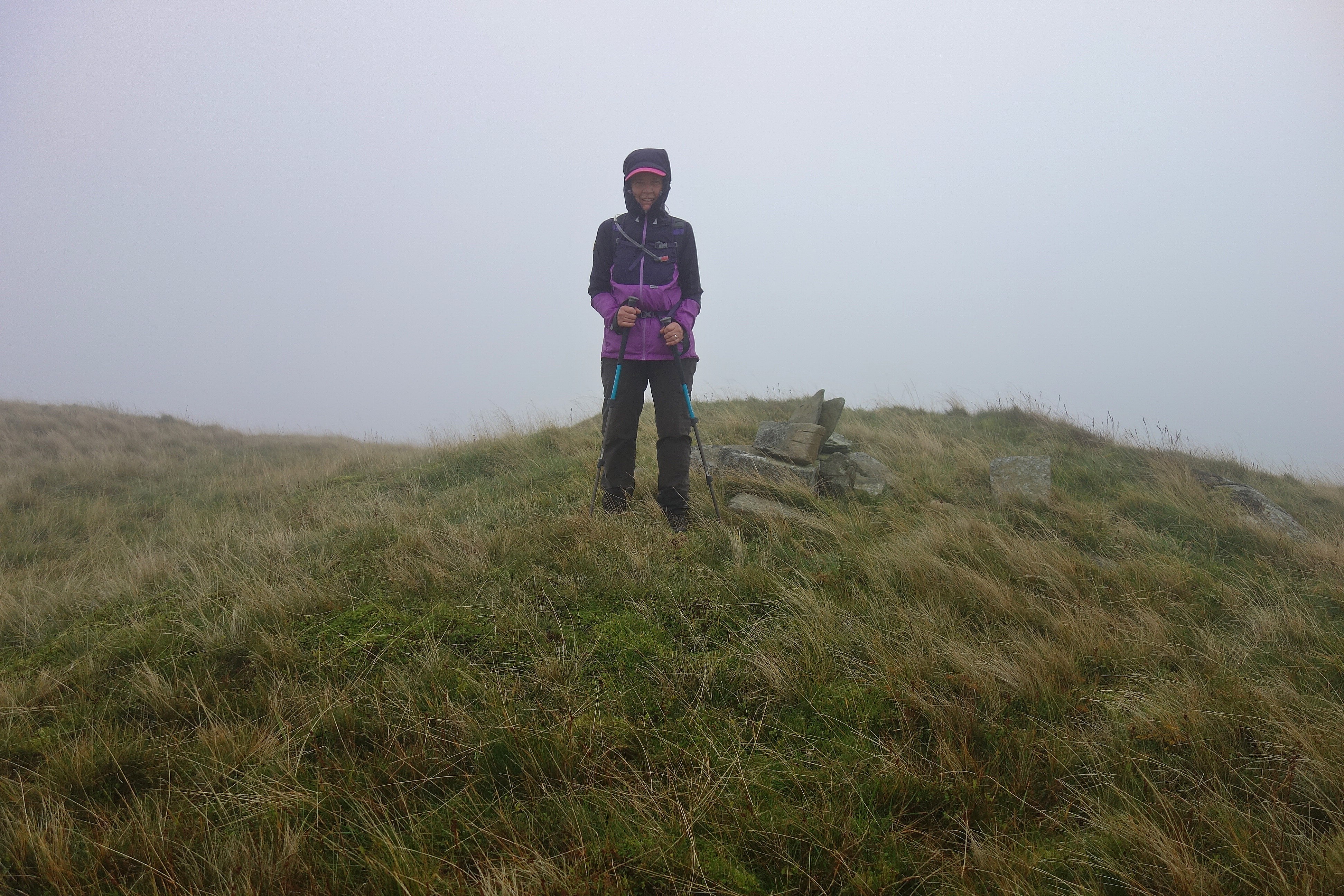 There was a small path heading over and around the lumps, eventually we could just make out a cairn on what turned out to be the last lump before a descent, a quick look at the map and then a double check on the GPS showed us we were on Howes, we stopped for quick snack and then retreated using the trackback function on the GPS. 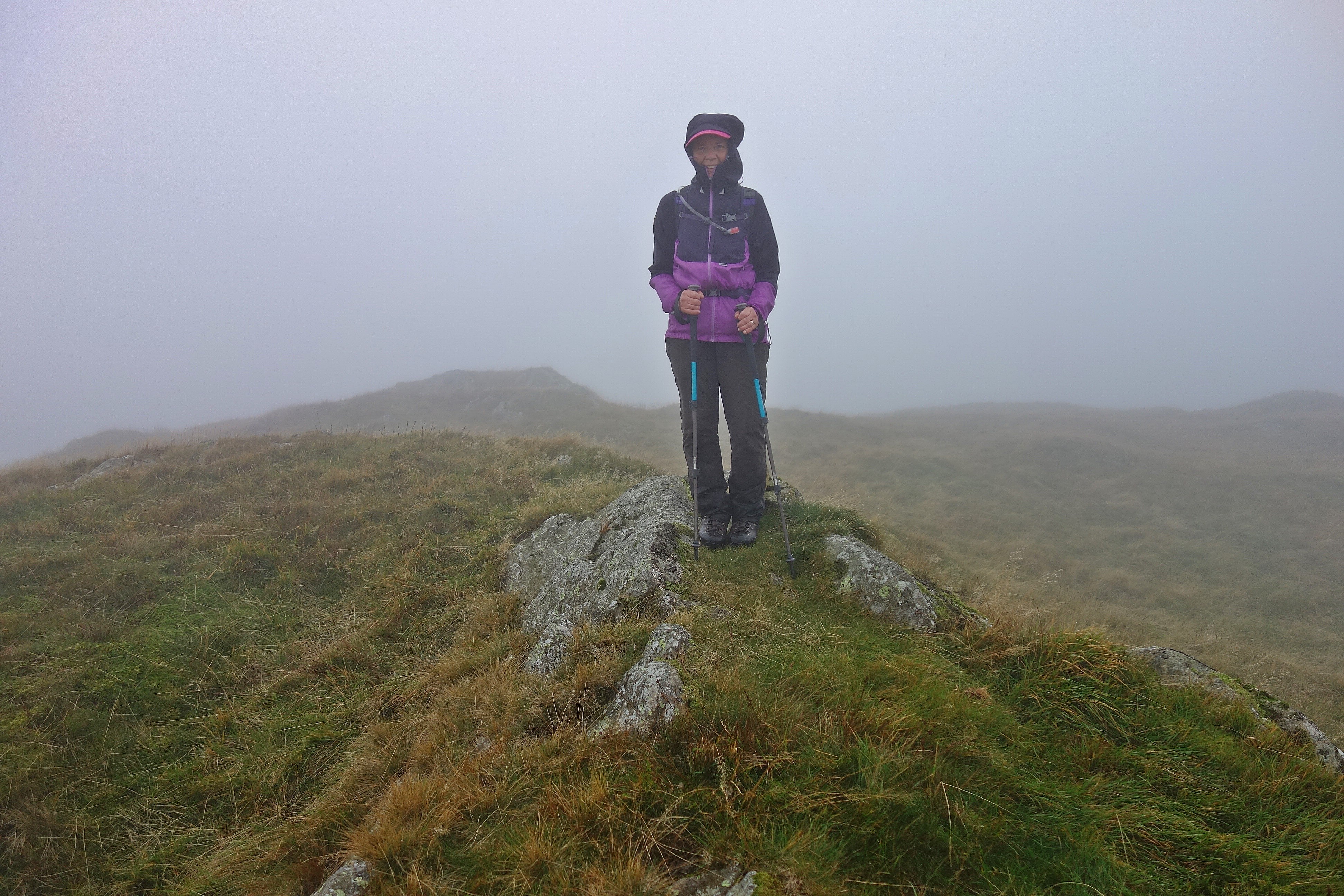 Back on the main Mosedale path we started to regret our decision but decided we'd managed to get two more outliers so we'd make do with that, we had come for the views after all.

We kept looking back, it was getting brighter, the rain had become a drizzle, the clouds were still over the tops but we could have put up with that, oh heck had we made the right decision?

When we were back at Swindale Head we saw the finger post for the Old Corpse Road, our planned route would have crossed this higher up once we'd come off Selside, after a very quick discussion we decided it looked brighter so should we go up and have a look at Hare Shaw, we had plenty of time so that's what we decided to do, off we went up the Old Corpse Road.

When we got to the point where we would have crossed the path our hills were clear whilst Selside and the hills on that side were still clagged out, ahh that's fortunate, we decided to go back to the car via the hills

We would head for Woof Crag, a reasonable target because from there we'd be able to see Hare Shaw and most of the remainder of the route so we set off on a direct line towards it. This was a bit difficult over tussocky terrain, we visited a couple of hummocks on the way over just to make sure we didn't miss the top, once there we saw there was a cairn, we could see Hare Shaw and a path heading towards it. After a quick rest and snack we set off for Hare Shaw.

On Hare Shaw we could see our next port of call, Powley's Hill and a quad track running up it. 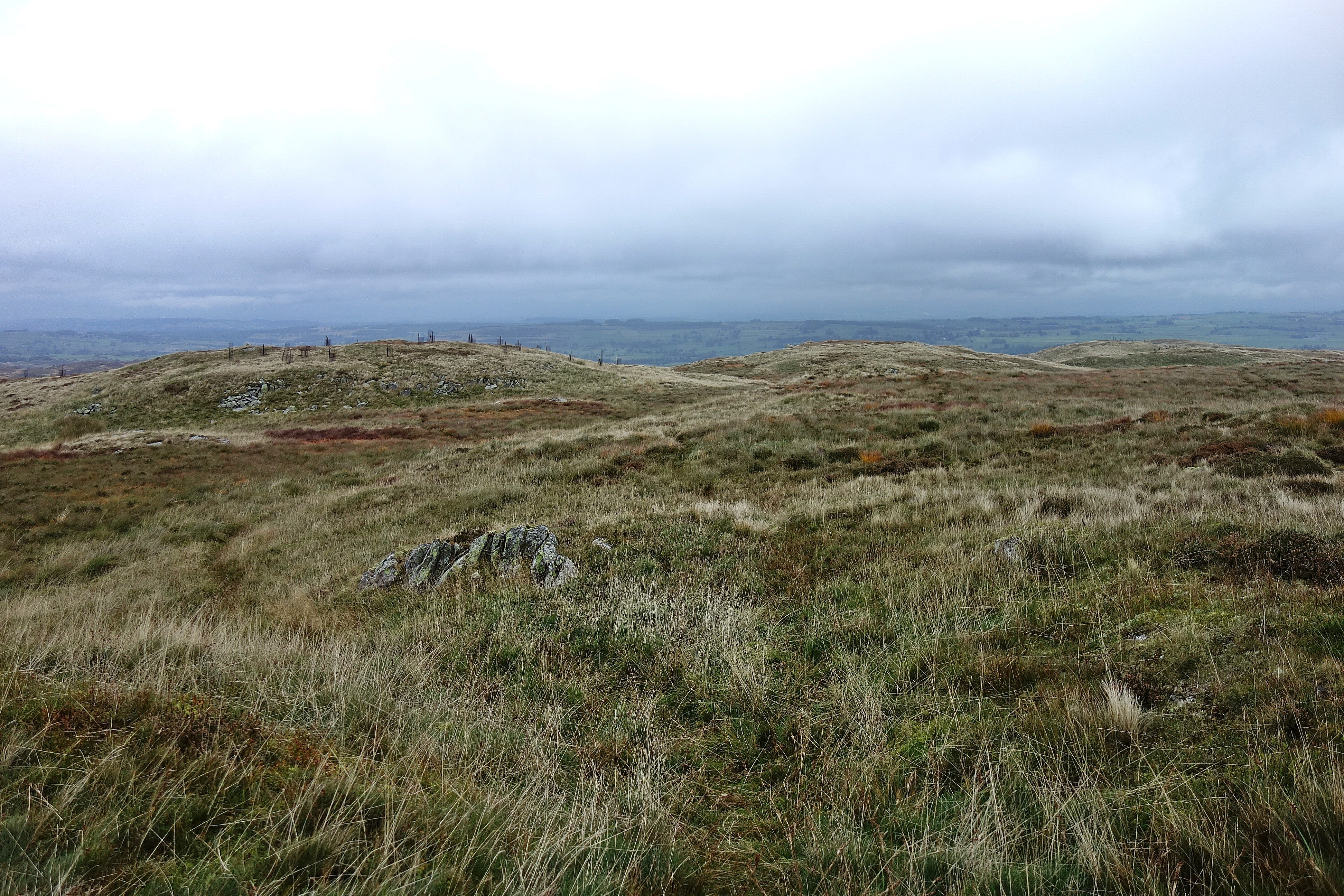 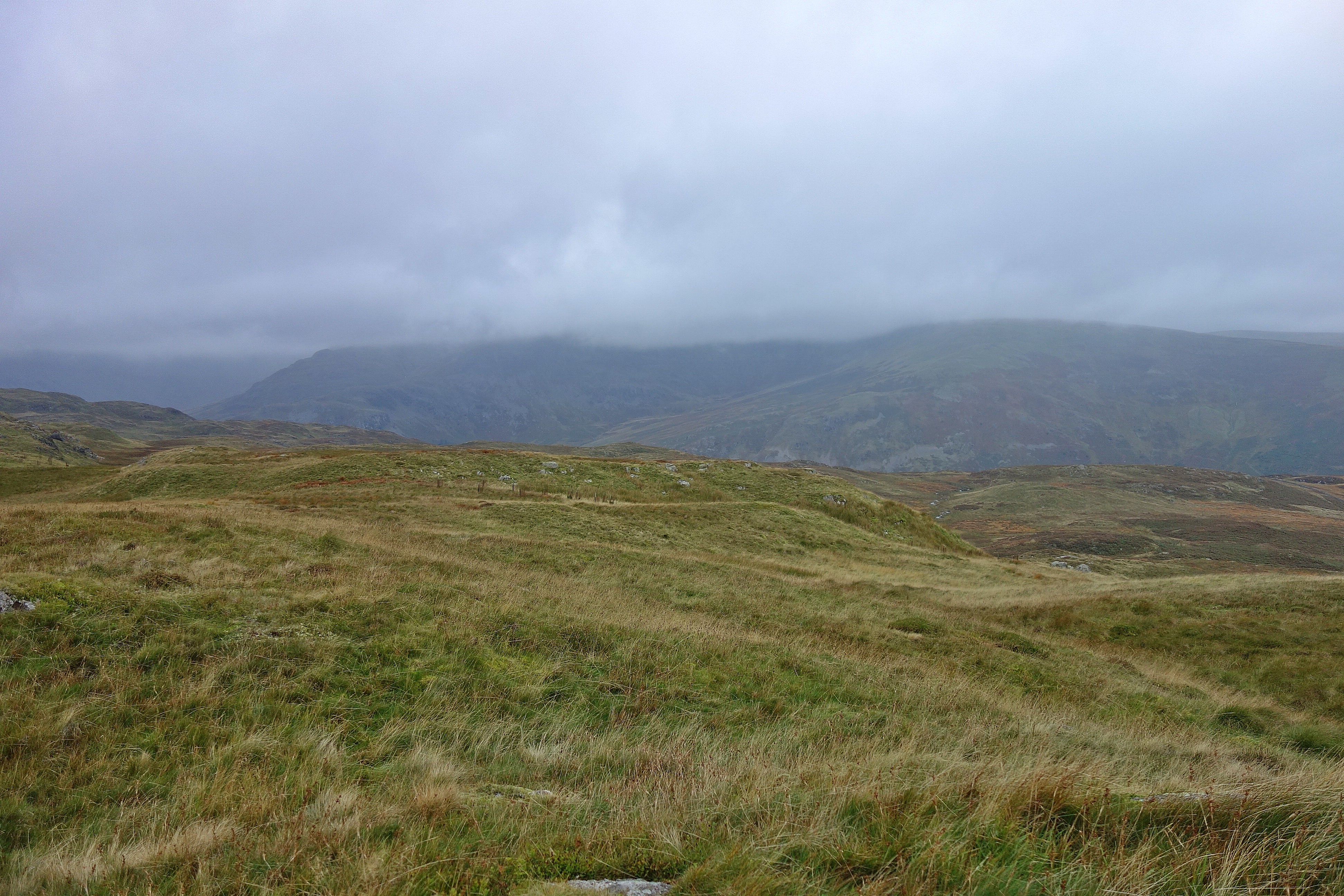 From here there are two paths

one heading away slightly to the left and the other heading directly for Powley's Hill, we took that one, after running around and over hummocks it eventually joined the quad track, from the top we could see Harper Hills.

The path we were on was running away from our route, we could see the wall that runs over Harper Hills so we took a direct line towards it. This was very rough going and there was a fence barring the way over to Harper Hills, luckily where the fence meets the wall there's a gate at around NY506141 so, without much of a detour, we met the track that runs along side the wall and went through the gate.

The walk up Harper Hills is nice and steady, there's a couple of hummocks that could be the top, from one of those we visited we could see the cairn on the highest so off we trotted, got to the cairn had a quick photo stop, it had started to rain a bit now

our last one Scalebarrow Knot was not far away so we set off hoping to get there before the rain set in. 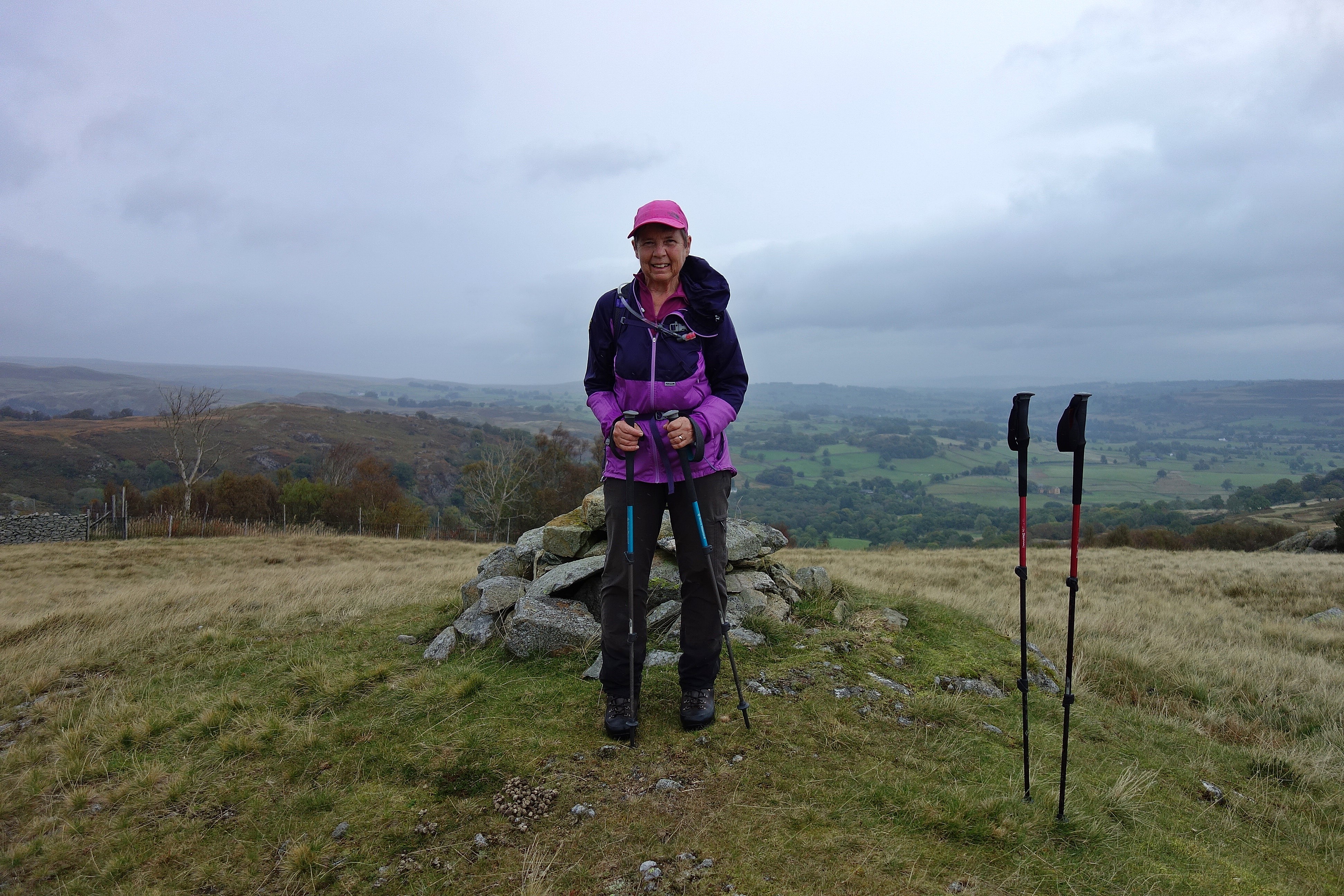 Looking Back, the weather turning for the worse. 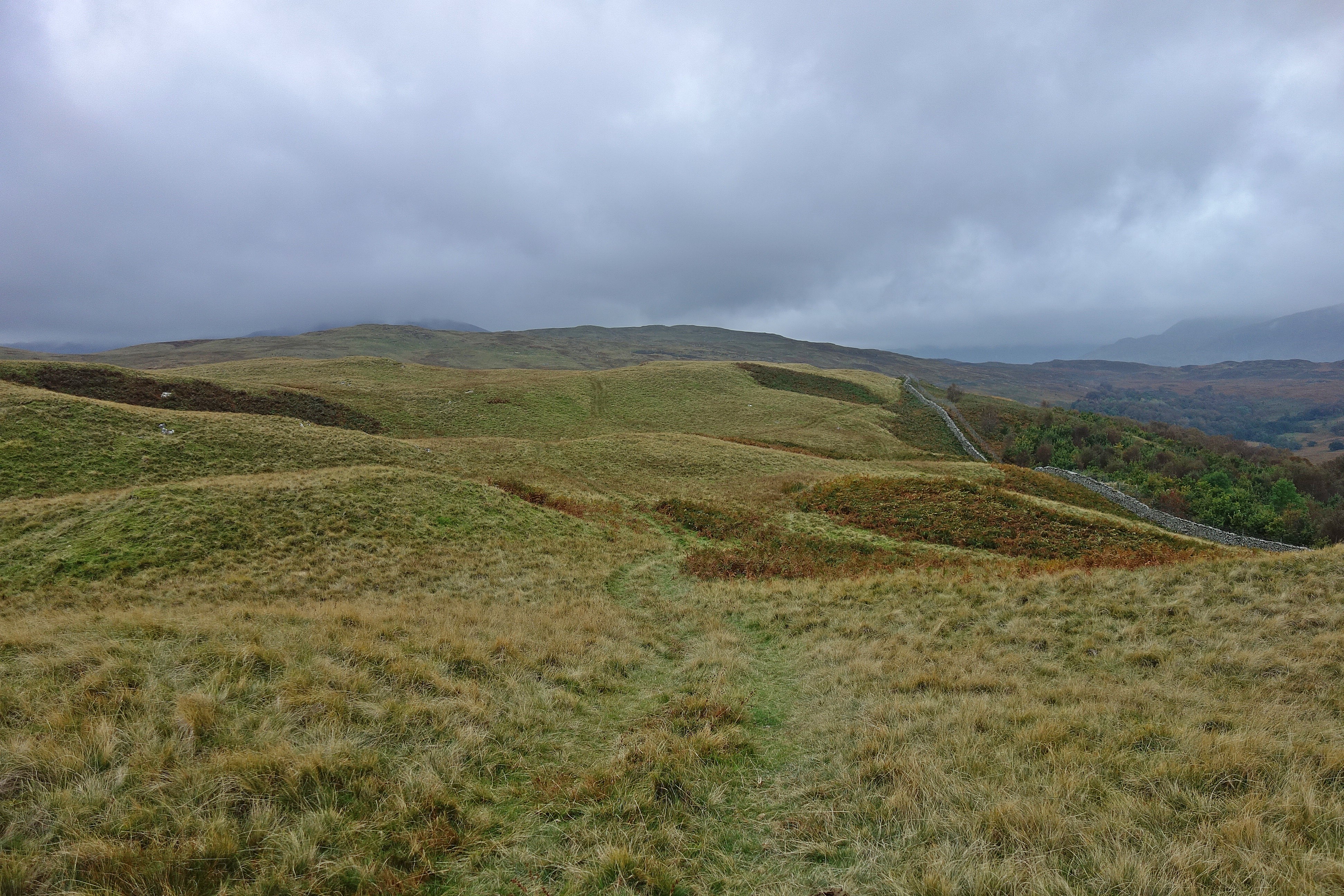 On the top of Scalebarrow Knott we we had to put our jackets on, I managed to get our summit shot before the camera had to get stowed away in my rucksack by now the rain had set in

so the timing wasn't that bad We set off from the top, luckily the walk down to the car was on a decent path and only took about half an hour, we arrived at the car a bit on the soggy side, this was due more to the wet undergrowth and ferns, we were glad to be down, after a quick change into dry clothes we sat in the car and had something to eat.

Another good day out in the outliers, pity about the weather but we did manage to do what we set out to do, we missed Selside which wasn't too much of a issue, we've been up there before, it was a last minute decision to use the
Old Corpse Road, I'm glad we did, it made a good day better

Re: Ups and downs on the fells above Swindale.

Another good day on the outliers martin.h despite the crappy weather

The ground can be a bit rough in that neck of the woods and I've spent quite a bit of time roaming those hills and there are quite a few paths and tracks about if familiar with the terrain. The area around Mosedale is not a good place to be in the clag and a wise move to retreat using GPS Tracback function

Well done and a great report

Re: Ups and downs on the fells above Swindale.

Thank you TM, the fells are a bit rough going but, to be honest, I quite like that, they feel a bit wilder

once on them they start to make sense, ie, avoiding the ups and downs

The GPS is a handy tool for identifying the tops and the track back function, the map was better for keeping tabs on progress. The outliers are becoming quite addictive