These two half-day walks seemed a good choice for a day when the weather looked decidedly changeable, and later - up on the Glyder ridge in a wind that made it difficult to even stand still - it was certainly a relief not to be many miles from relative safety... Beautiful seeing conditions throughout though, and two very contrasting walks in terrain and landscape.

The Pistyll Rhaeadr falls, and the pretty half-greened cliff faces they pierce, are very much the feature of the route up to Post Gwyn on the heathery moors beyond. There's a very good stoned tourist path winding up to the top of the falls on the eastern side, although you see them at their best from the valley below. 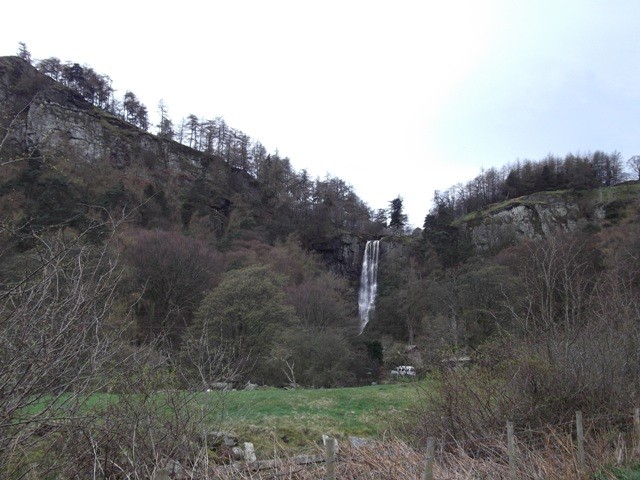 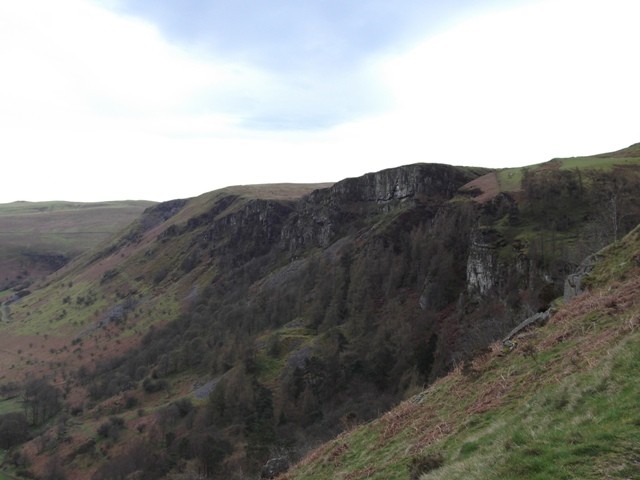 From there though, the next three or four miles to and across Post Gwyn are more of a struggle. You start off on a good path following the river, but it quickly becomes damper and the surroundings are fairly featureless. It isn't really clear where to strike out up to tackle the summit, but the heathery slopes straight up opposite Cwm yr Eithin heading due south weren't too difficult and it seems sensible to take this, the most direct of routes. The actual top is quite pleasant, grassy and with quite good wide views, but it's something of an oasis on the broad, flat and boggy summit ridge - the couple of miles back to the clifftop are a bit of a test, although a good vista of the higher Berwyns opens out as you go. 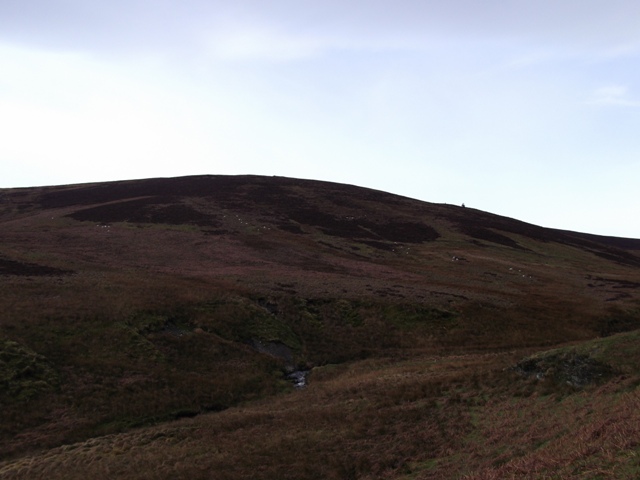 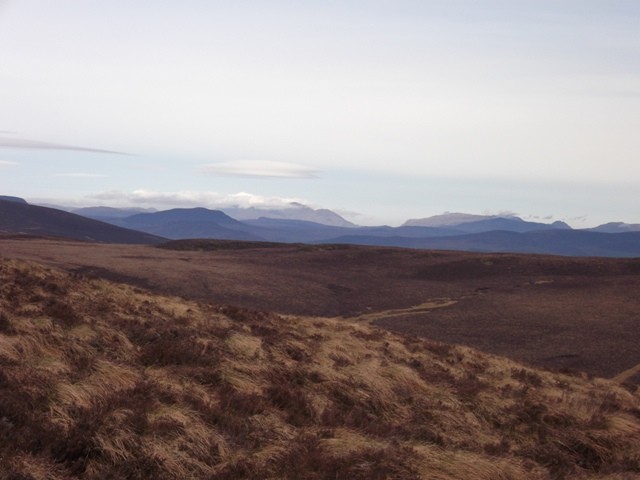 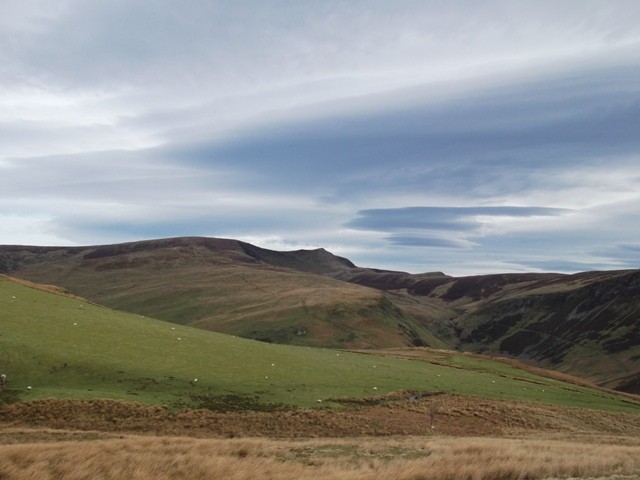 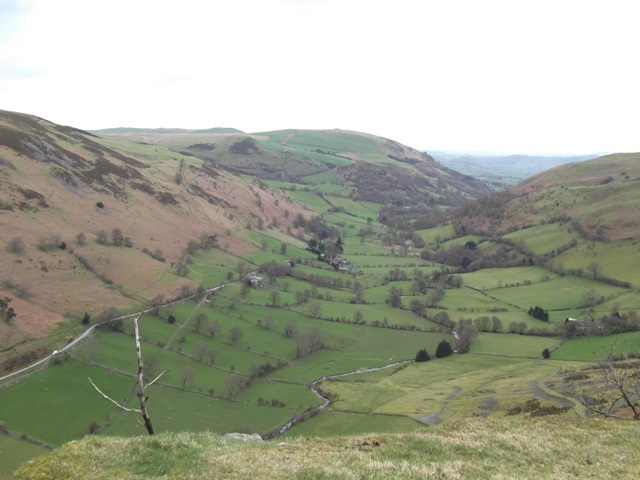 From the top of Craig y Mwn and along the (rather narrow and hairily exposed - definitely to be avoided by vertigo-sufferers) path that cuts down the cliff, the walking back to the falls is easier and the views good. If you aren't too worried about reaching mountain peaks, you could make a really pleasant two or three mile circuit of this, cutting out the tramp west over the moors. 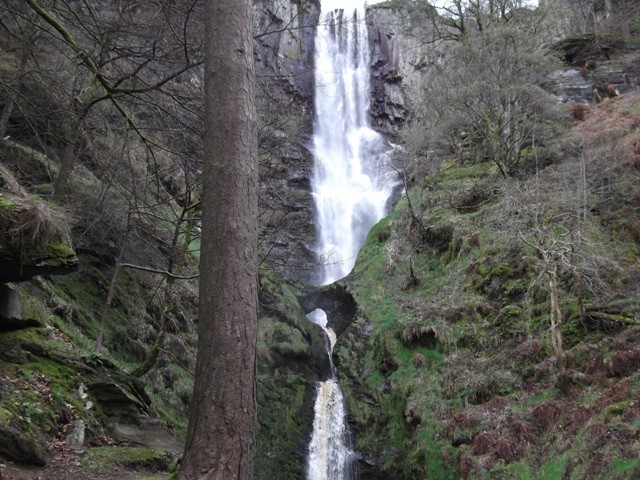 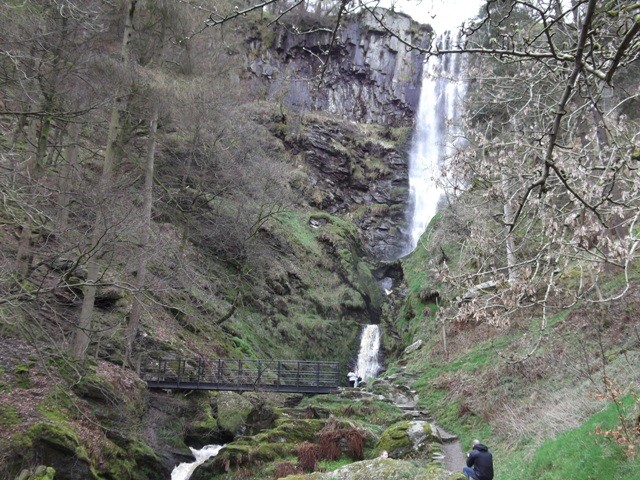 After that, a short afternoon circuit around Cwm Gwern Gof up, and between, the higher and rockier peaks of Snowdonia. Terrific views of the mountains all round (there might have been more pictures of these if the camera wasn't threatening to blow out of your hands on the tops!)

our_route.gpx Open full screen  NB: Walkhighlands is not responsible for the accuracy of gpx files in users posts
From the Gwern Gof Isaf campsite (pay £2 to park, although the lady in the farmhouse seemed faintly surprised that anyone was doing so! Perhaps that reflected on the weather more than anything though...), it's quite a steep and wet slog up to the cross-fence, but from that point there are good paths the rest of the way. The summit ridge of Gallt yr Ogof is lovely, with great views over the Glyderau and Carneddau and several rocky little tops to clamber over. 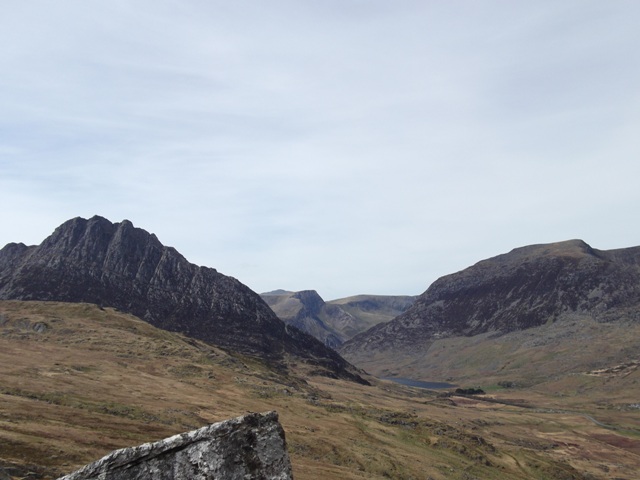 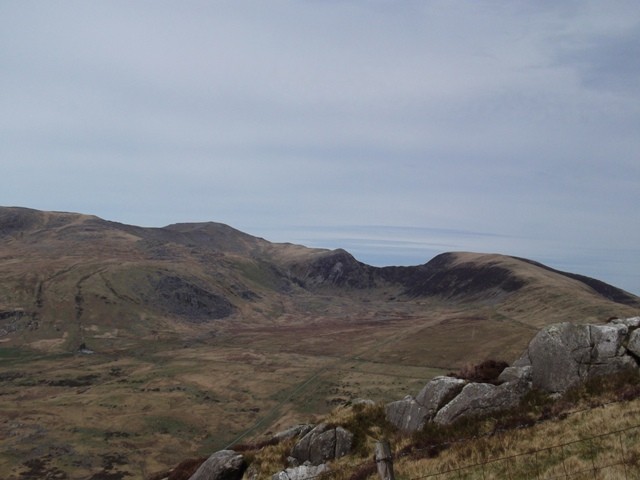 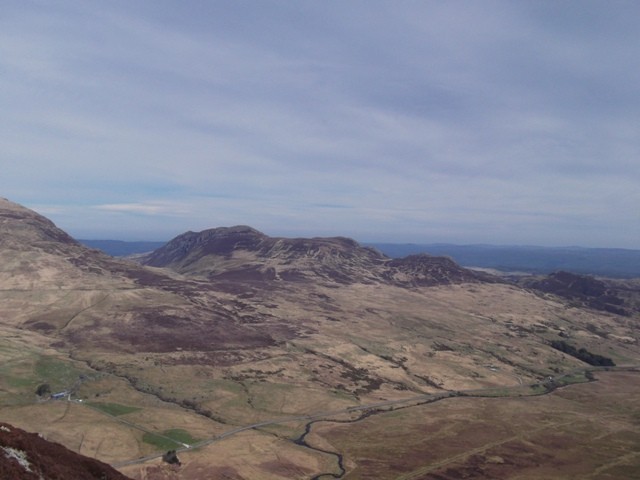 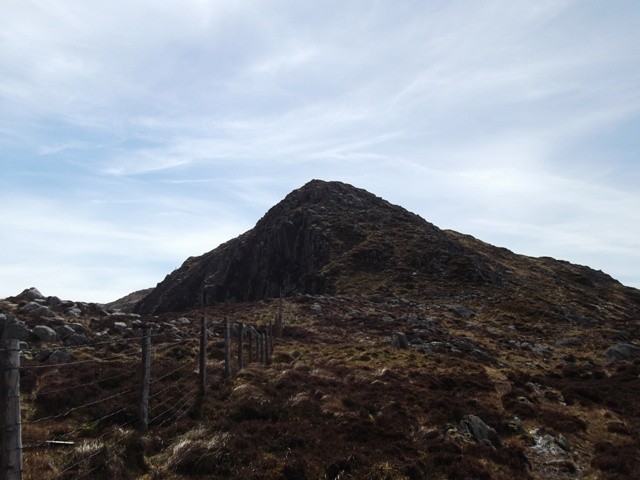 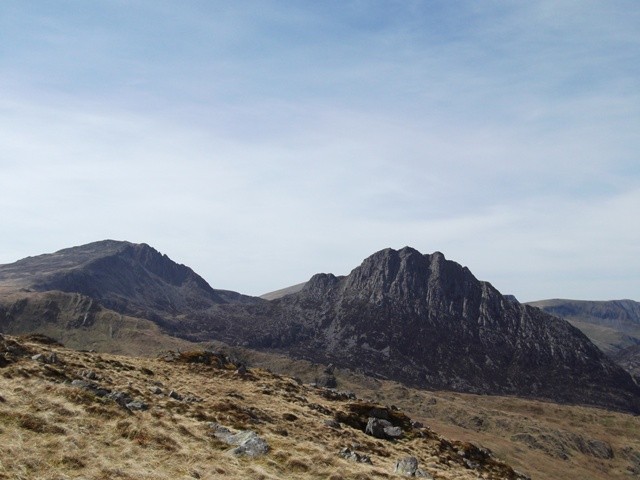 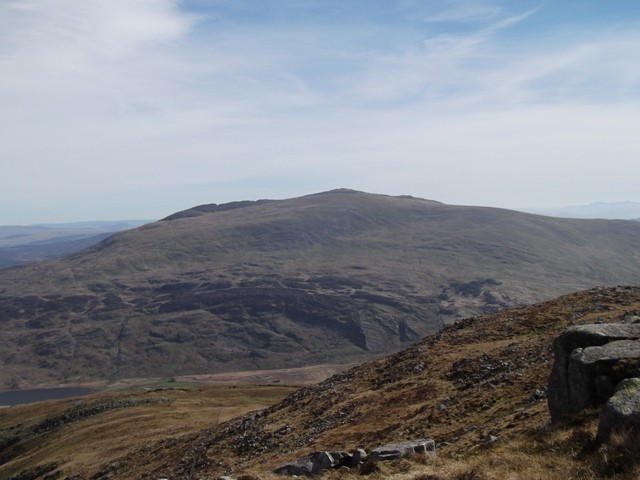 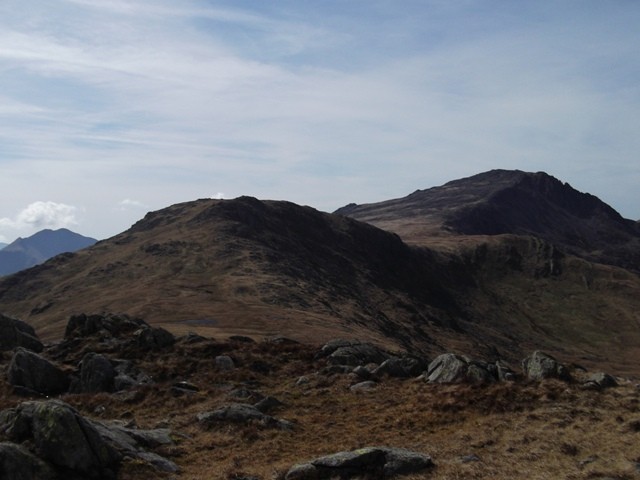 Y Foel Goch, while higher, isn't quite such a star, a little rounded and with boggy cols either side, but it does offer an unbeatable view to the Snowdon horseshoe (spoilt a little in shot by the position of the afternoon sun). It didn't seem quite the time to be on the higher peaks though - surprisingly, although the summit ridge of Tryfan was in full view for two hours or so on a sunny spring day, I don't think there was a soul up there in all that time - and it was something of a relief to drop back into the lee of the slopes and begin descending. (Certainly a half-plan to go on to Glyder Fach was very quickly abandoned!). 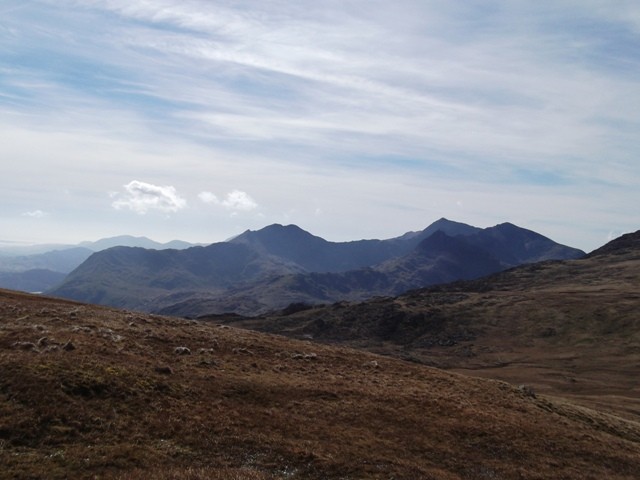 Most of the descent ridge of Braich y Ddeugwm makes for a very pleasant route, with open views to the peaks climbed earlier one way and Tryfan the other, and interesting rocky going underfoot (keep to the highest parts in order to skirt some boggy areas). You probably won't make it all the way back to the campsite this way though, unless with a rope - it steepens considerably as you go down with the little rock faces you can scramble down giving way to bigger and smoother ones - and at some point (it seems to get fairly consistently harder, so do so just after the stage you start to feel uncomfortable) it's prudent to drop down the fields either side and splosh the last few hundred yards instead. I'd guess this might make for a really good route of ascent to the Glyders and Tryfan though - one to try on a summer day... 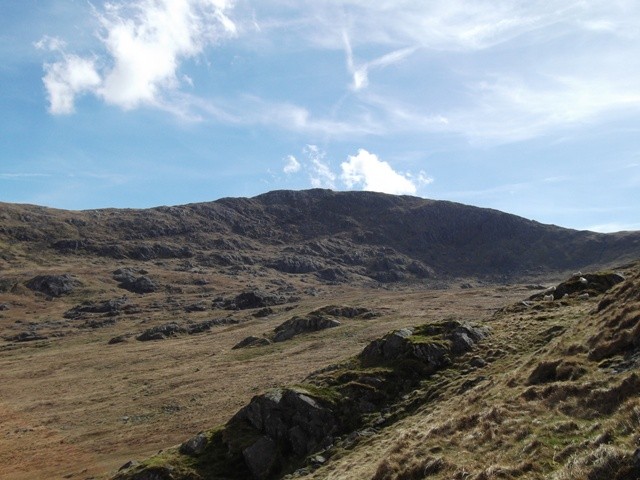 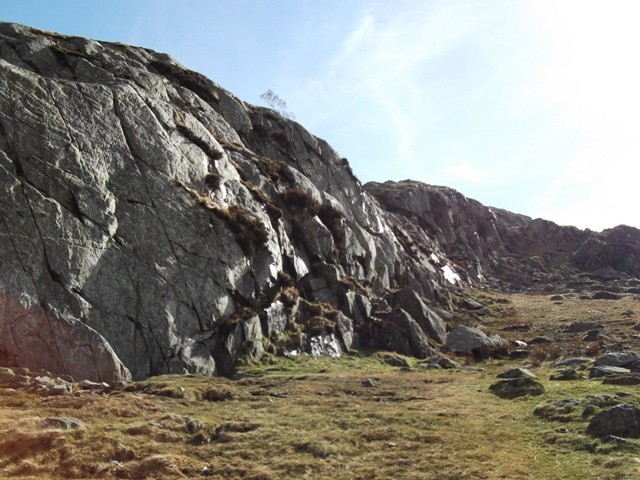 Two great looking walks, shame about the wind but at least you stayed dry and managed to keep hold of the camera to get some cracking pics

I was on tryfan on Thursday and weather was rubbish.

I can believe it! Can't imagine anyone was daredevil enough to go anywhere exposed on that Wednesday afternoon (but am still half-expecting someone to come on and say they were on Tryfan!)...