On an absolutely beautiful day under a blazing sun, mixed walking among apparently little-visited hills.

our_route.gpx Open full screen  NB: Walkhighlands is not responsible for the accuracy of gpx files in users posts
It feels a little unusual to start a Welsh mountain walk on a main road, parked opposite a Co-Op in the middle of a town, but it's only a few minutes before you're back in the wilderness, first through the deserted stepped landscape of the slate quarry and then on the broad moors leading to Moel Penamnen. The route here is a lot less confusing than you might fear from the map - a very clearly waymarked path leads through the best part of the quarry and then (after rudely ignoring the 'turn back now' sign!) it's a short climb over the crest of the hill into the marshy flat plain heading for Moel Penamnen in the distance. The hill itself is something of an oasis - a pleasingly steep and grassy rise with good views north, but in between a very wet tramp to and (especially - the route back to Manod Mawr is horribly boggy, even after a dry spell) from it... Over Maen-offeren quarry to Blaenau Ffestiniog Once on the slopes of Manod Mawr though, life perks up considerably. There's a good climb up to the north top with its stony, almost pavemented summit area, and then after a quick tramp down the quarry road, with views of the ravaged faces of the mountain, an especially pleasant climb over grassy rises and little boulders to the main peak and its rock furniture. Although almost no-one on this site seems to have been there, Manod Mawr (I guess because a short and easy climb from a town centre, on a glorious day) was much the busiest mountain I've seen for many months, and it's hard to recommend highly enough. As long as you don't mind the closeness of the quarry workings, the route up (or down, this day) from Blaenau is terrific and the top an interesting place with great views. 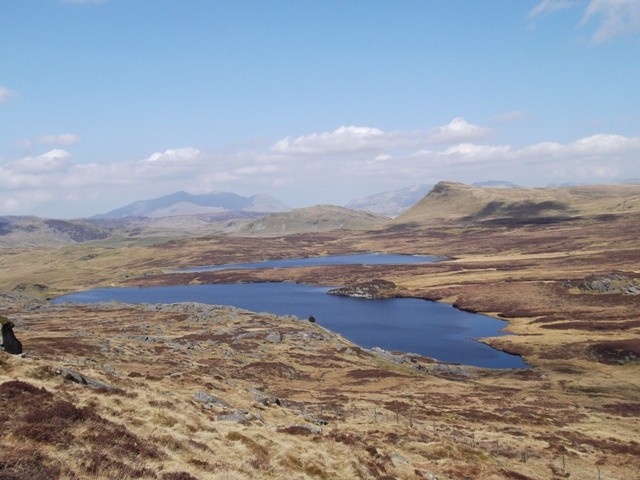 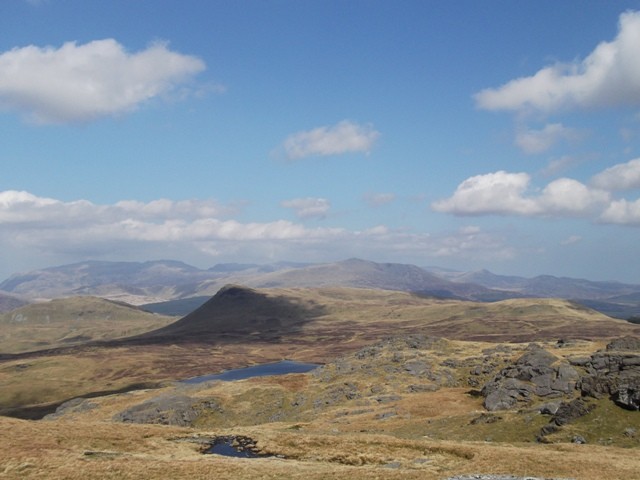 Over Blaenau Ffestiniog from Manod Mawr 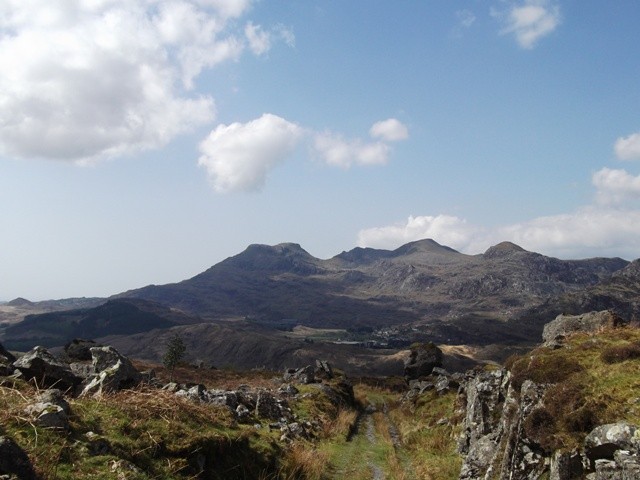 Moelwyns from descent of Manod Mawr

On the other hand, took in the short climb up Foel Cwm Sian Llwyd on the way back...

our_route.gpx Open full screen  NB: Walkhighlands is not responsible for the accuracy of gpx files in users posts
Heathery. Pretty wet too. Very tough. OK views (but nothing you won't see better from elsewhere). Really not much fun. Maybe there's a nice route to devise that takes it in, but it's hard to envisage. One for 'baggers' to do once and once only then (and to think twice about even that, there are limits...). The best that can be said is that - if you hurtle back down the direct route - it only takes 45 minutes. But you'll never get them back! Nice report and some interesting photos there, poppiesrara. It's good to know that a walk that doesn't look that tempting on the map is actually quite rewarding. Your reports are certainly providing with me with better information on the Welsh Hewitts than any guidebook could!

I notice you mention Foel Cwm Sian Llwyd being a tad on the boggy side. I''m planning to do that along with Post Gwyn sometime soon, and with what you said in an earlier report about Post Gwyn, it seems I'm in for a featureless, heathery, tough-going kind of day. I can't wait ...

On a general point, Red Peak, thanks! Post Gwyn was ok really, not nearly as tough as this, but it's more the steep, thick, pathless heather - the bogginess is only down in the valley towards the road and the lower part of the stream; the upper slopes aren't as bad, and there are some half-paths about. Someone was coming over from the Y Groes Fagl direction on Sunday and that looked just as bad though.

I'm sure people have combined Post Gwyn and FCSL, but the map doesn't really inspire much confidence in how you'd do it! I'd guess it might be better than this though - the slopes are gentler, which would help a lot.

Great report, some stunning views and some really interesting ones too, love the comment "it only takes 45 minutes but you'll never get them back"

Some fantastic pics there - a few fluffy clouds make all the difference. Have to agree with your comments about Foel Cwm Sian Llwyd though. Did this just for a quick stretch of the legs when returning from Snowdonia a few years back and boy was it a slog, especially the direct route up over the heather. Slightly easier taking the arcing route back down but my wife was most decidedly not happy at the effort expended for so little reward. If she could give it a minus star rating then it would be off-scale!

God I haven't been up those since I was a nipper with my Mum and Dad! Great to see your report and photos - especially like the one of the Moelwyns

Wouldn't mind doing those soon if I can get to Wales

Also really enjoying your reports, as you seem to get to a lot of the more obscure parts of Snowdonia, many of which I've rarely visited. I'm ashamed to say I've never been up any of this lot, although I've done the nearby Y Ro Wen a couple of times.