Today was the last of my four days in the lakes and I decided to bag my final five Northern Fells.

Having read lots of scary things about various routes up Blencathra I decided to go for the "easy" option and ascend via Souther Fell and the Scales Fell ridge. I started at Mungrisdale and took a few failed attempts before finding the route onto the hill. The entrance marked in Wainwright's book now has a "Keep Out" sign on the gate so I wandered along the road towards Scales until I found a gate across the road which led directly onto the hill.

The path up Souther is little more than a few intersecting sheep trails and rises quite steeply in a series of zig zags. It's quite a boring hill really but it does give great views out to the Yorkshire Dales and its larger neighbours. In no time I was down on the col between Souther Fell and Scales Fell and heading up towards the main event of the day. Blencathra is a stunning mountain from any angle and it was great fun watching all those brave souls heading up the various razor-sharp edges. I have to confess hat watching people ascend and descend Sharp Edge made me feel physically sick. That just isn't my idea of fun but good luck to those who like that sort of thing.

From Blencathra I picked a line and trudged straight towards what looked like the highest point on Mungrisdale Common. I could hear Wainwright laughing from above as I and 3 others from different angles headed towards the Joker in his pack. It isn't a particularly pleasant walk as the ground is wet but it had to be done. There is a better path from the summit cairn towards Rannerdale Crags but again it is wet and boggy stuff and must be a real pain on a wet day.

Rannerdale Crags is an impressive big lump of rock from the Mungrisdale side and there are some great gullies to look down from the summit ridge. Last but not least was Bowscale Fell with its impressive double-cairned summit and it was then down The Tongue back to Mungrisdale for a nice cold pint in the Mill Inn.

So that's the end of my long weekend. Four walks, 31 Wainwrights, one huge blister and a sunburned forehead. Oh, and I've now bagged all the Northern Fells -only 6 more books to go 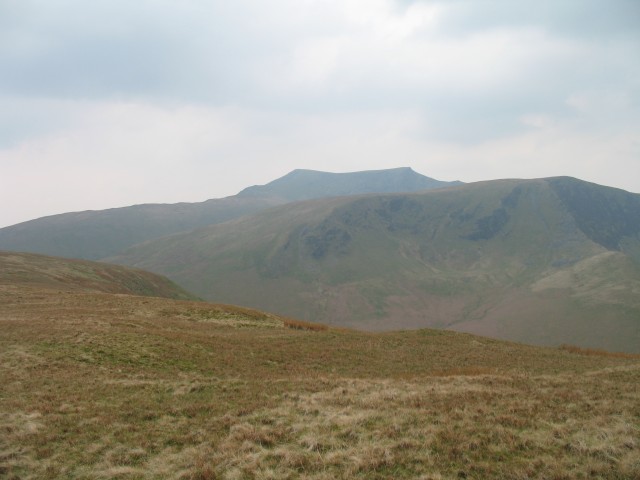 Looks like you did a fair hike there Derek T. I did Blecathra a couple of years ago and was extremely disappointed with Sharp Edge. It's so short it's hardly worth the effort and I don't even remember the so called 'Bad Step'. To be honest Hall's Fell is much more fun. Very very overrated in my opinion.

That's a hell of a long weekend's effort, Derek! Great going & some very enticing shots over the four trips.

poppiesrara wrote:That's a hell of a long weekend's effort, Derek! Great going & some very enticing shots over the four trips.

It was a great weekend - very challenging to do alone with no one else to spur me on. Each morning I woke up with sore legs and no motivation but as soon as I got out on the hills it felt great to be out there. I'm heading north to do my first Munros of the year on Saturday and might bag a few more Fells on the way home

Nice to see Mungrisdale Common visited - I actually enjoyed my trip there!