Please note, due to the haze some of the photo’s have been heavily processed

any resemblance to reality is purely accidental. Leaving the car at 8:00 am i hiked up the well maintained footpath to Stickle Tarn, then after a brief rest followed the east bank of Bright Beck to Grid Ref 287083 before a steeper ascent north put me on the summit of Sergeant Man, from car to summit 115 minutes.

Looking up to Sergeant Man The summit cairn of Sergeant Man Living so close to these hills i don’t feel the need to push myself (only intent was 2 Wainwrights this day), and spent over 1 hour on the summit of Sergeant Man in the warm sunshine taking in the views. Eventually i headed off to Blea Rigg where the best part of 2 more hours was spent lazing around, i was reluctant to move. But the time came when i had to make a move, thereafter a leisurely walk due west brought me back to Stickle Tarn where even more lazing about took place in between taking photos and watching scramblers ascend Jacks Rake.

Jacks rake is the diagonal line running up to the left, while Easy Gulley runs up to the right 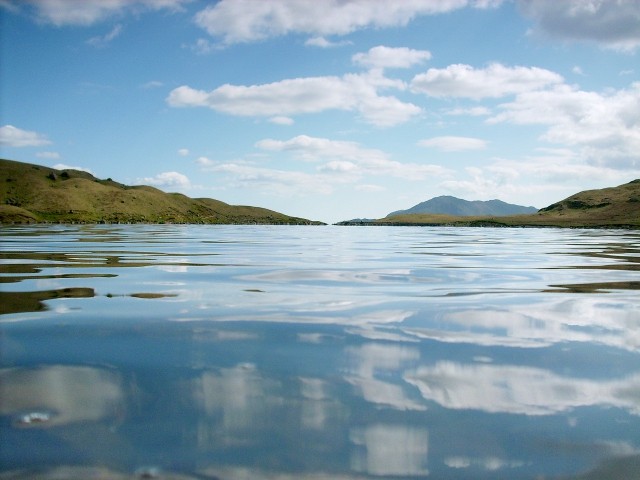 After a snooze by Stickle Tarn my descent was hastened by thoughts of cumberland sausage, chips and a gallon of cool drink that awaited me at the New Dungeon Hill hotel, the perfect way to end a hill walk.

What a fantastic day you had. Like you I am always reluctant to leave a summit unless it's to head for a superior one. I am most reluctant to leave the last summit of the day as it signals a return to the real world. I experienced this in the Howgills a couple of weeks ago http://www.walkhighlands.co.uk/Forum/viewtopic.php?f=16&t=11162 when I could have sat on top of Yarlside in perfect solitude until the sun went down.
Your pics are excellent and it just goes to prove you don't have to head for the "biggies" to enjoy the reward of a perfect day.

ditto. I think the rippled reflections make the picture.

Great pics, did the round from Grasmere with these two and really enjoyed it, although bit of a slog, thanks, Sue

What fantastic photo's! Looks like you had the perfect day. Heading down to the Lakes next weekend, hope we're as lucky with the weather.

Love the photos taken from the surface of the water ...