On a cloudy day where - although never close enough to make route-finding difficult - conditions obscured the better views (and photograph opportunities, apologies for the predominance of mist and shadow...), this proved quite a testing long up-and-down walk through the edges of the higher peaks of Snowdonia.

our_route.gpx Open full screen  NB: Walkhighlands is not responsible for the accuracy of gpx files in users posts
The first 'summit' of Craig Eigiau looks quite impressive from beneath, and the well-trodden path up from the parking area to its very rocky top is easy and pleasant with (even today, through the haze) good views of the higher Carneddau to the west. Getting from there to Pen Llithrig y Wrach, however, is something of a test. First a pathless descent over rough grass and - although luckily not at the moment - quite marshy-looking terrain, then from the quarry it's choose-your-own route up to the ridge... There are a few faint paths contouring round to the east and gradually up the cliff (the highest one, experience can report, is very narrow and exposed) but each seems to lose height as often as they gain it, and the going is painstakingly slow. There doesn't seem to be an obvious way up to the ridge, but the vertiginous gully I chose when losing patience, very steep and slippery with a few large steps with little in the way of handholds, probably isn't the best one! After that, it's a relief to reach the obviously well-used path along the ridge from Pen yr Helgi Du up to the rounded summit. 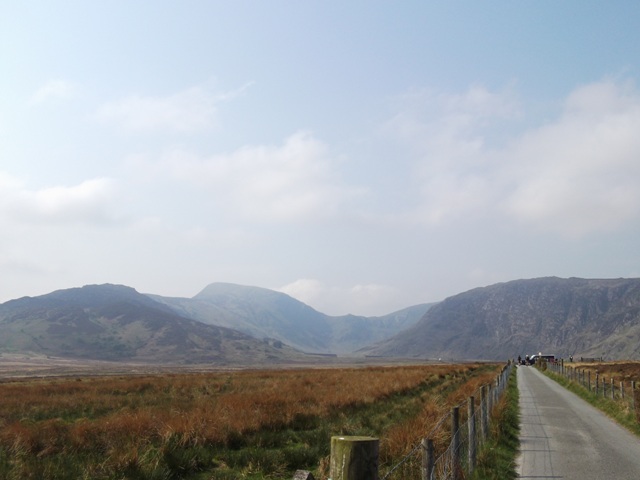 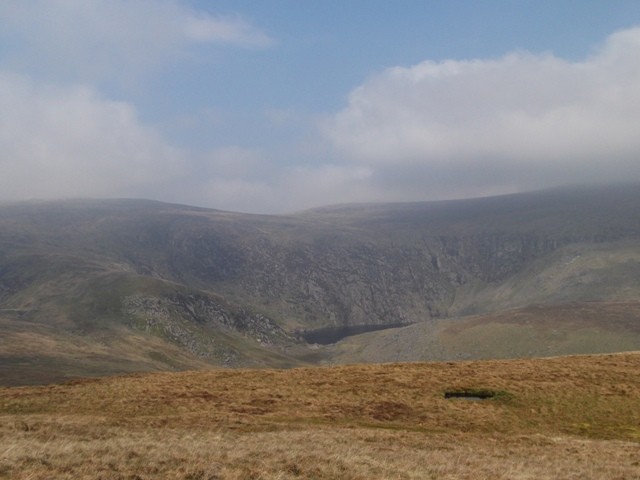 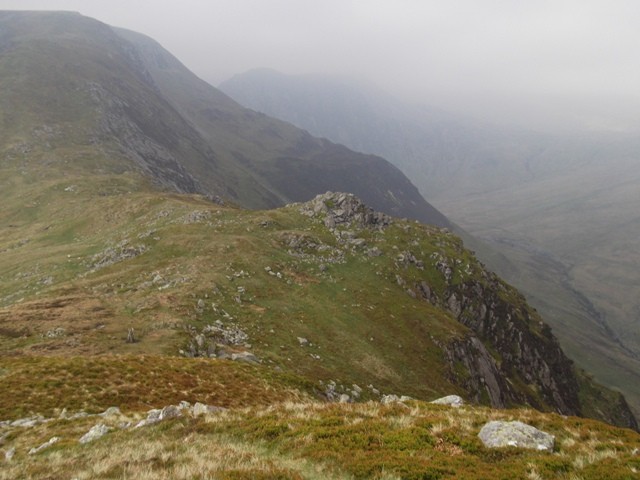 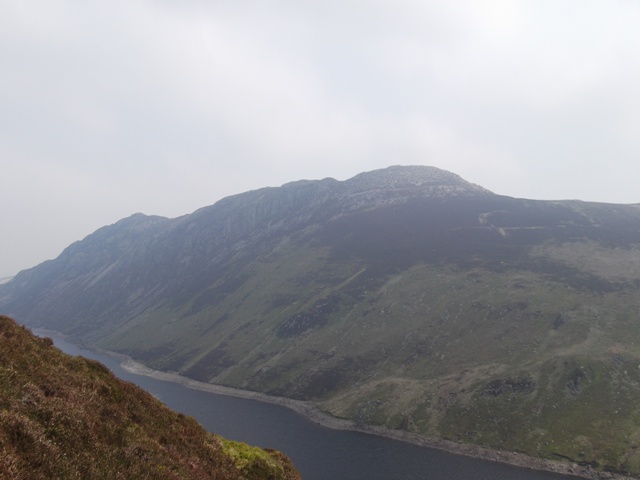 The good path continues to wend its way down the south ridge to the shores of the Cowlyd reservoir, looking quite brooding today nestled between the mountains, but then gives up again before the heathery ascent to the Creigiau Gleision ridge. Once up there though, the next mile or so north, up and over the several rocky little rises overlooking the waters below, makes for the best walking of the day, with both the main tops pleasant little half-scrambly ascents. Looking back, Pen Llithrig y Wrach looks steep and quite daunting from this side. After a tricky initial descent from the north-east ridge down towards the reservoir dam - from where the two mountains loom above quite imposingly - there's a clear and relatively straightforward path or track to follow for the miles back to the start. Late in the day though, and after some difficult climbs earlier, this seemed unusually testing and even the little drag up between the (pleasant-looking) minor peaks on Pen Llithrig y Wrach's north ridge was a trial. 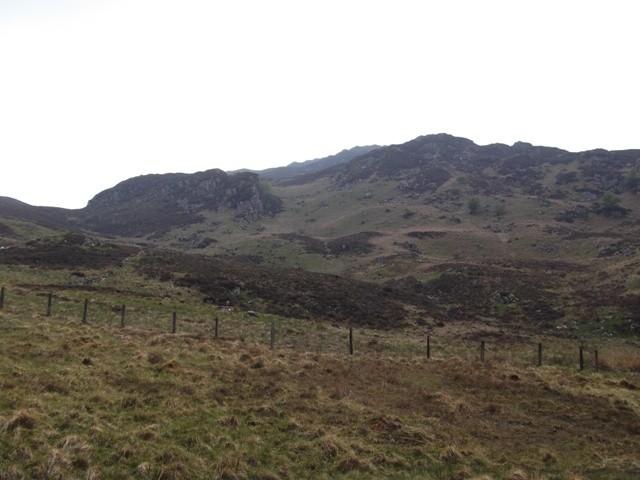 Overall, an oddly mixed sort of walk which feels rather like three disparate routes spliced together in rather a frayed manner. There are good walks here - up Craig Eigiau (and perhaps onto Foel Grach thereafter), up and over Pen Llithrig y Wrach from Pen yr Helgi Du, and especially along the Creigiau Gleision ridge - but the sections between them aren't much fun, and there are probably better ways to explore this area.

Another excellent report P, some nice photos there. you must spend half your life in the hills!!!

, but it isnt a bad place to be mind!

so thanks for the reports so far.. cheers

between you and I we should get the whole of the Carnedau on WH soon enough.

I'm planning another big wlk to finish off the rest of the Carneddau using your Northern route plus adding on Grach and Fras with a overnight in one of these building(S) if poss.

There'd be many other people who know the area better than me, Mackenzie, but I've seen the building by the Dulyn res'r at 702664 described as a 'bothy' which suggests that's in a suitable state and perhaps a bit better than 'abandoned', although I've not been there. There's also the shelter near the summit of Foel Grach, I guess - that was pretty rough but it'd be a roof at least - or else perhaps, although it's a bit out of your way (you could loop round via the reservoir road to rejoin the northern route around the Pen-y-Gaer hill), the abandoned farmhouse at Eilio (733647) might be a good option. It still looks in a better state than most of its type, roofed and with almost a door even.