Hewitts included on this walk: Ingleborough


At the third attempt I finally had a bright sunny day to walk Ingleborough as previous visits had resulted in me walking through mist to the summit and seeing absolutely zilch. This day I set off from Horton Station with my eldest son. To add extra interest I decided to go via Moughton Scar, Trow Gill and Gaping Gill. While it was a long way round I wanted to see the scar and show Olie Gaping Gill. The initial mile or so of the walk is on a good path through gently rising fields before open land is reached and rocky outcrops of the limestone pavement can be seen. The well worn path continues in a straight line west towards Sulber Nick and an important walkers crossroads (seen later). Our path took a S.W direction through the rocks to end up on the top of Moughton Scar and the first highlight of the day, the impressive line of cliffs which form the abrupt end of the Scars and the view down to the valley of Crummackdale. The pleasent descent to the valley took us into a picturesque walled lane which we followed for around half a mile before cutting through the fields and back onto open fellside to join the path coming South from Selside. We also headed South towards Clapham until we cut down the hillside and onto the main path to Gaping Gill. This took us through Trow Gill (dry) which is a miniature Goredale Scar. Once out of the top and back in the open it was a short walk before reaching Gaping Gill Pothole, one of the great natural sights in the country let alone the Dales. I'm sure nearly all readers of this will be familiar with it so I'll not give a geology lesson, suffice to say it really is a damned impressive place to sit and have lunch.
Now fully refuelled we set off towards Little Ingleborough along the path which has been renovated along most of it's length before climbing what looks to be the longest man made staircase in the Dales to it's summit (excellent views to the South). It is a gentle gradient to the summit dome of Ingleborough a mile ahead and once on the top a level walk took us to the substantial wall shelter (much needed as it can get very windy!!) As expected the all round views are excellent, this being the second highest summit in the Dales (724m). Many Dales summits are seen, including Penyghent to the East sweeping Southwards there's Pendle Hill and Morecambe Bay and westwards to the Howgills and the Lakeland Fells. Clear distance views were hard to come by today though as there was a lot of heat haze . Still can't have it all.
There are no views into the valleys below though, to do that a walk around the edge is called for.
After another rest we did just that and followed the Western edge to see the view to Chapel le Dale and Ribblehead Viaduct backed by Whernside. There is a steep descent to the saddle where the path from Chapel le Dale joins and a vague path to Simon fell continues Northwards. In my pursuit to "bag" the Dales Hewitts it was always my intention to push on to Simon Fell but Olie seemed to be flagging a bit (Well he's only 32 bless him) so he made his way down the Horton path while I headed up to the unspectacular summit of Simon Fell. All I can say about it is It's a Hewitt so it had to be done. The one redeeming feature is a cairn on it's Eastern edge which has fine views to Ribblesdale. My way back to the main path involved crossing some rough ground. Experience told me this should have been extremely boggy but this was a prime example of just how little rain there had been as the whole area was bone dry. Having met up with Olie it was merely a case of three miles easy walking back to Horton via the crossroads, mentioned earlier, through Sulber Nick to rejoin the path we'd left 5 hours earlier. That walk had clocked up my 50th mile and topped the 10,000 ft of ascent over four walks done in an eighteen day period. Not a lot for some but but it means I may still be good for a few years walking yet.
As a footnote to this we said Hi to a scottish guy on Ingleborough who then left the summit around 15 minutes before we did. Considering I had my two mile diversion I was surprised to find we had caught up with him around half a mile from Horton. I soon found out why though. It turned out he was just finishing the three peaks and was suffering from some very painful blisters. So if you are that guy (yellow top) and read this I hope you recovered enough to enjoy a few jars in the Crown. 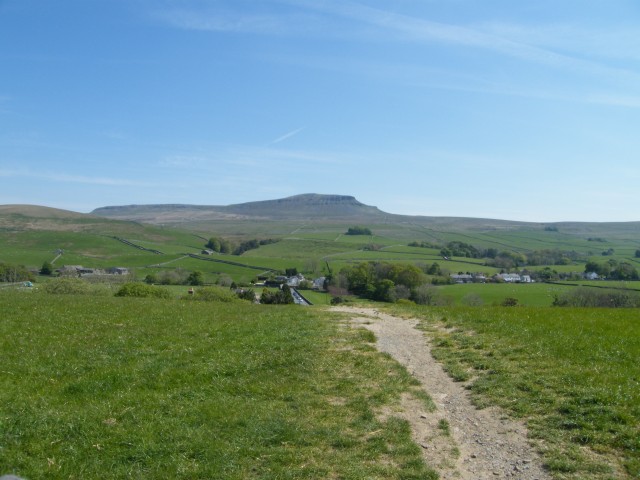 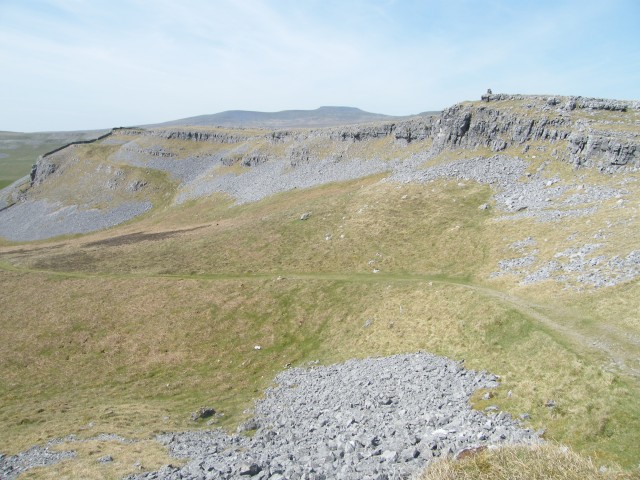 The crags of Moughton Scar 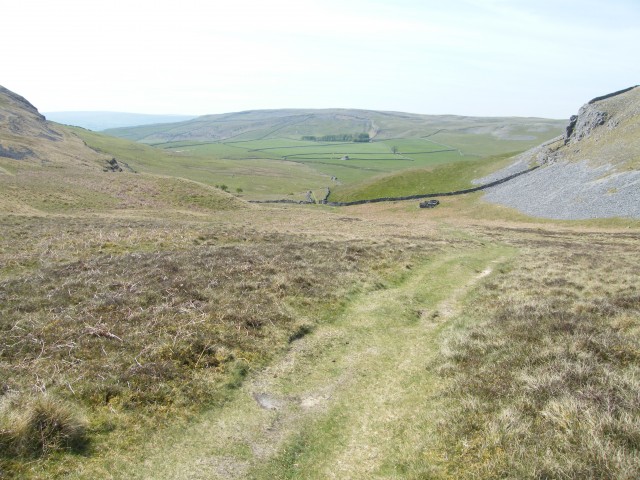 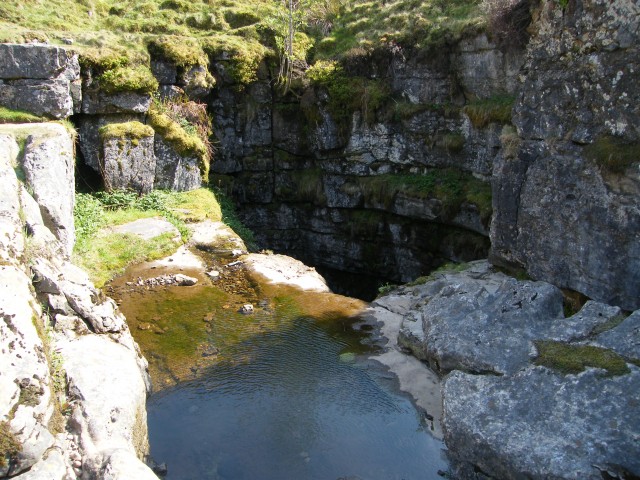 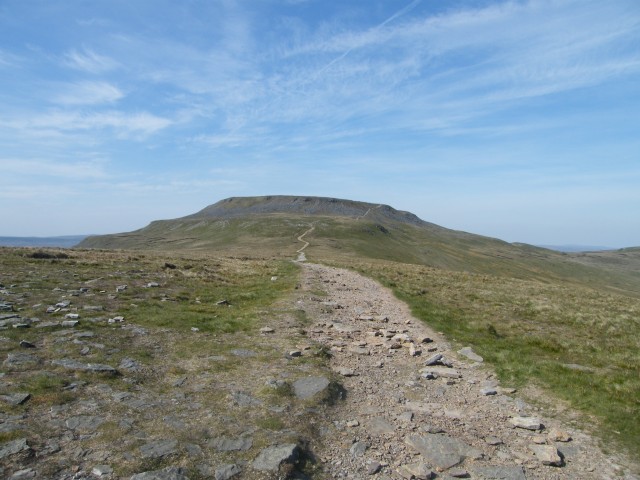 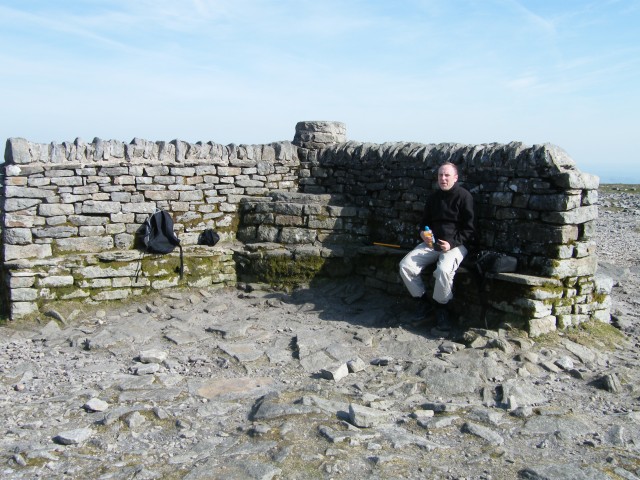 Olie and shelter on the Summit of Ingleborough 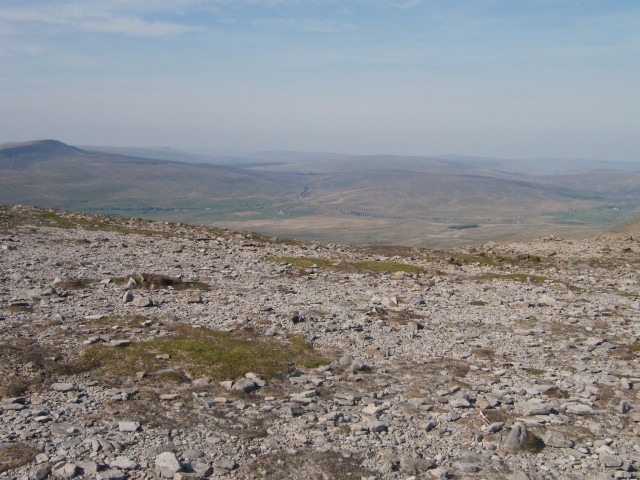 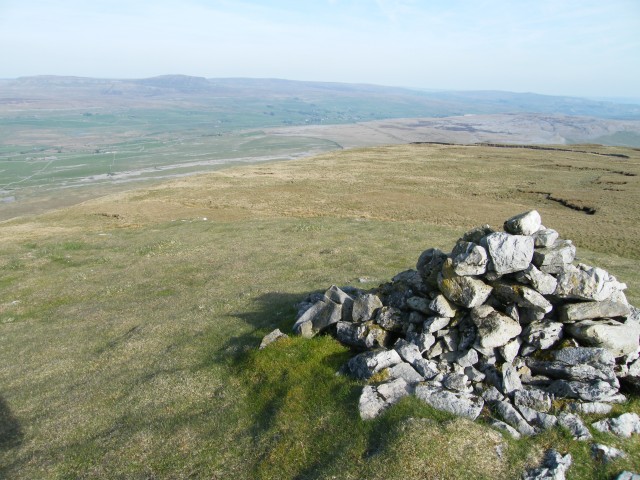 Excellent report colgregg and nice to see nice pics and views, something I didn't get on my one and only visit. Pleased you didn't climb down the rocks to stand on the very edge of Gaping Gill like I did - it's frightening!

Did that on previous visits to get dramatic pics, if it's dry it's fine just best avoided when wet as it's like walking on soap. Anyway it was before we got to the summit. Would have been a pity not to have got there. Also I had the car keys (problem 1) and Olie is clueless when it comes to route finding and would never have found his way home.

I keep saying every Bank holiday I'm going to go to the winch meet but have never got round to it. The next one is August I'm going to make a concerted effort to get across this time.

That little rock ledge on the left middle of your picture - I climbed down the waterfall rocks to stand on that. It was terrifying looking down that black hole. Would never do it again.

Great report on a familiar area to me, thanks Sue

susanmyatt wrote:Great report on a familiar area to me, thanks Sue

And on a day like we had weatherwise one of the best places in the country to be, outside the Lakes.

houdi wrote:That little rock ledge on the left middle of your picture - I climbed down the waterfall rocks to stand on that. It was terrifying looking down that black hole. Would never do it again.

You mean this Houdi. About as close as you can get to Gaping Gill hole without actually falling in.

Don't do that! I've just had palpitations

Geography field trap many years ago. Held leaning over the edge by slightly manic teacher so as to 'appreciate it better'. Never liked dark holes since...

Fantastic pictures of Gaping Gill - I try not to get too near so never get photos like that. Good route taking in lots of interesting features might try it sometime. Ages since I've been up Ingleborough

Crawler wrote:Fantastic pictures of Gaping Gill - I try not to get too near so never get photos like that. Good route taking in lots of interesting features might try it sometime. Ages since I've been up Ingleborough

I ve also Done Ingleborough from Selside - Sulber - Ingleborough - Gaping Gill - Trow Gill and back to Selside dropping in (no pun intended) to check out Alum Pot and the Long Churn caves on the way back. Both routes far superior to the straight up and down from Ingleton.