My friend John and his son-in-law Peter were walking the Wainwright Memorial route, raising sponsorship for the MS Society. On Thursday night they were to stay at Black Sail Hut having completed the hills to the south of Buttermere. The weather for the preceding six days had been abysmal and had literally taken its toll with them being blown off their feet whilst on top of Blencathra on Monday and had not been much better for the other days with both high winds and heavy rain a feature.

Our plan was to meet with them on Friday morning at Black Sail Pass, having made plans before the walk commenced (we knew that mobile reception would be limited). So my friend Peter, brother Chris and I made the almost 2 hr journey from Appleby to Wasdale, an area of the Lakes I had not been to before. What a magical place it is!

We booted up and were away by 9.40am. We agreed that Peter would take the route up through Mosedale direct to Black Sail Pass. At the same time Chris and I would climb to Kirk Fell via Beck Head and join with everyone at Black Sail Pass. View back to Wasdale

The slog up to Beck Head and onto Kirk Fell took us longer than expected. However, the views to Great Gable (now officially my favourite Lakeland hill) were teriffic and other more distant views began to spring up towards Honister and beyond to the North and the Scafell range to the South. 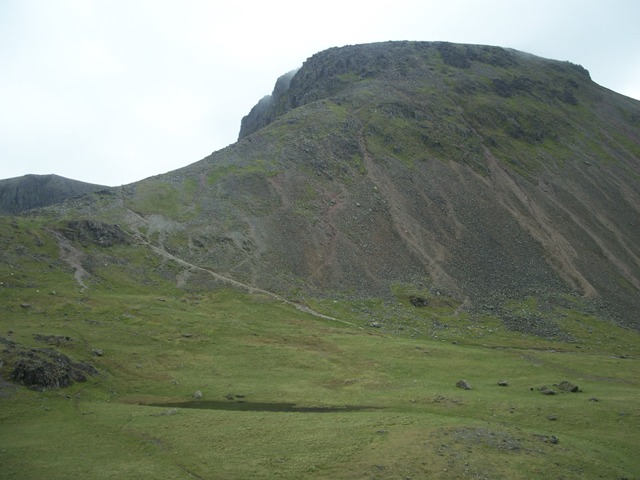 As we dropped off the North West corner down a very steep and eroded path through the Kirk Fell Crags, we didn't know what or who we would find. Unfortunately, we could only see Peter (no detriment meant to him). He had been at the pass for about 45 minutes and had seen no sign of J & P. It was nearing midday so we decided to have some sandwiches and see if they would arrive. They didn't. We were in two minds, one hopeful that they had beaten us to the pass and not wanting their legs to stiffen, had carried on to Pillar and beyond. On the other, we were concerned that plans had perhaps gone awry and they were having problems making the rendezvue or had gone back to catch up on missed hills from earlier in the week. Peter decided to wait at the pass and Chris and I carried on towards Pillar.

The weather was surprisingly good with all tops including the Scarfell massif now clear of cloud. It seemed to me to be a very special place. Peter had told us to take the 'high level' route, a misnomer as it traverses along the side of Pillar. It was a fantastic walk, passed Robinson's Cairn and eventually brings you out over a small crest to look directly onto the very impressive Pillar Rock. It was then a short but steep climb to Pillar summit, a relatively level top complete with small shelter cairn and trig point. The sun came out but there was still no sign of J & P. Looking down into Ennerdale Nearing the summit of Pillar We continued down from Pillar to Wind Gap, very well named as the air squeezes over from Ennerdale to Mosedale. Climbing again, this time over a small boulder field, we reached the top of Scoat fell complete with dry stone wall. Just away from the summit, I left my pack with Chris and ran (well jogged some of the way) to Steeple and back again. Cloud was beginning to close in and views weren't quite as good at this point so we continued without ado South East to Red Pike. 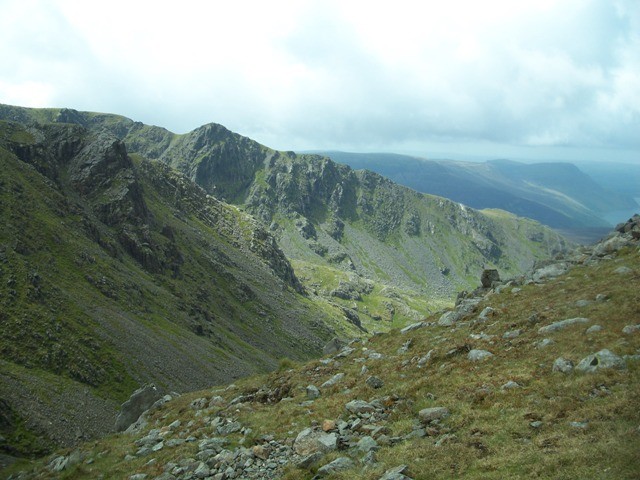 From Steeple to Scoat Fell

Chris's right knee was causing him a little trouble so we stopped so he could put on a knee support. It was an opportune moment as when I checked my Satmap, the battery had died. I put in a spare battery pack and got it working again, luckily it had saved the data. Chris had set off again in order to keep his legs moving. Unfortunately, we had managed to get on a bypass route which didn't take us to the summit cairn of Red Pike. Chris was now almost out of sight as he dissapeared along the ridge above Black Crag. I doubled back and reached the cairn before carrying along the ridge to catch up with my brother. Still no sign of J & P. I eventually caught Chris on the descent to Dore Head. I had considered going over Yewbarrow, however my legs were tiring now so instead took to the Dore Head screes. What a descent it was. Having lost only 30-40 feet, we noticed 3 people at the bottom of the hill. Could it really be Peter, John and Peter? Each step we took down the scree was worth about 4 on a normal path. With the aid of our walking poles we kept our balance. It was a first for me, great fun and saved my feet and knees from too much pounding. Half way down, two of the people had gone, but as we neared the third one, we could see it was Peter. He then gave us the great news that the other two were John and Peter and they had gone on to book in at the Burnthwaite Farm B & B and we would then meet up for a drink and 'catch up' at the Wasdale Inn. It transpired that our initial thoughts had been correct, they had indeed kept going when they reached Black Sail Pass and although we had gradually got nearer to them, we had not managed to catch them. I would recommend a visit to Wasdale, it is a very special place.

Good report and good views, looks like you were lucky with the weather.
It looks threatening in your pics but you don't mention any rain and you look relatively dry in the last pic.

Great report on a wonderful area, great views all round and some big height losses, we came off Haystacks and then went up from Black Sail to Pillar, its a good trudge