A day spent completing a year or so of touring the Welsh mountains, with two of the less traditionally ‘glamorous’ ones, but (perhaps partly because the anticipation was so desperately low!) a far more picturesque and enjoyable walk than expected…

our_route.gpx Open full screen  NB: Walkhighlands is not responsible for the accuracy of gpx files in users posts
The drive in between and over the Elan Valley reservoirs is quite lovely, and the initial ascent on a good mine track up the wooded Marchnant valley easy and beautiful. The following climb up south-east from the old quarry is rougher, an intermittently decent path hanging precariously above the stream interspersed with spells of thrashing through waist-high reeds above damp and bumpy ground, but it’s pretty brief - once on the higher slopes of Gorllwyn, the ground turns firmer and grassier and good views open up again across the valleys and reservoirs. Claerwen valley from slopes of Gorllwyn South towards Black Mountains from Gorllwyn The real test – and the true justification of these hills’ reputation as boggy horrors – is the stretch across the moor from Gorllwyn to Drygarn Fawr. The second hill is clearly in view almost all the way (in mist, both the best way onward and the motivation to complete the slog might be difficult to find) but it takes a long, long while before it starts to seem closer, and it may not be the best idea to look too often at the map and see that it’s actually over four miles away… There’s little variation in scenery or terrain for most of that stretch, and a bit of a teeth-gritter. The first stretch down isn’t too bad, with old boundary stones marking the way and most of the worse ground avoidable, but up from the vague col to the lower slopes of Drygarn Fawr is really tough going: hags, marsh (at the moment just wet feet and ankles, rather than knees and thighs, but even that palls after a while), long grass, and little or nothing in the way of pathing. After that, the quite rocky summit ridge is quite a surprise and the two huge and well-preserved cairns (quite what happened to the other of the titular ‘Three Large Cairns’ is unclear – perhaps sunk beneath the marshes??) undeniably spectacular. Close-up of Drygarn Fawr, over 4 miles of moor, from Gorllwyn 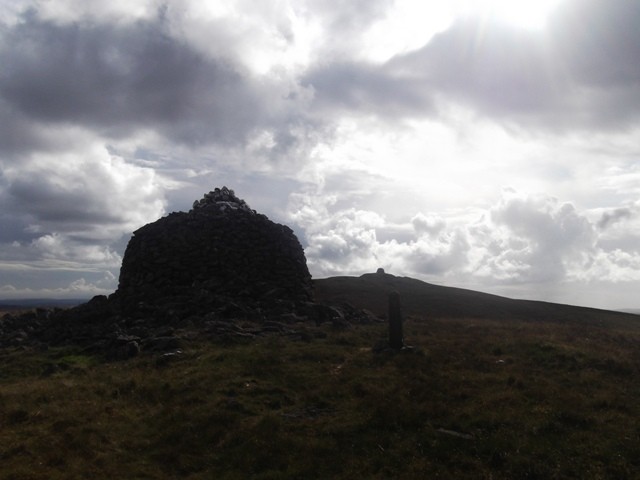 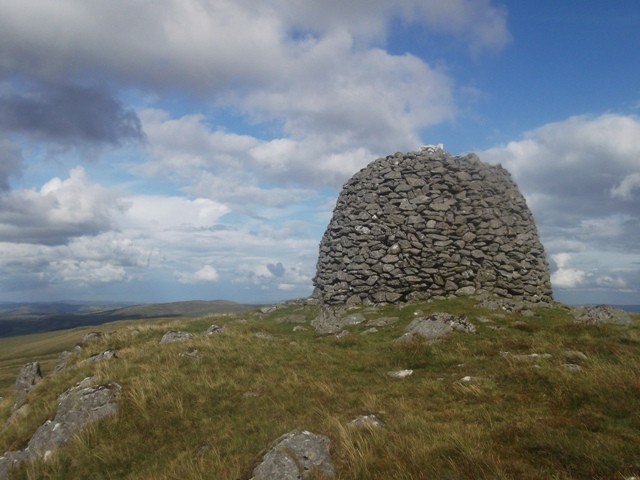 The hard work of the day is over then, with a clear and very well-routed off-map vehicle track setting off north-east, skirting the boggiest ground and – with enticing views throughout of the rocky gorges to the left – finding the best way down to the broad mine track bridging the Nant Paradwys and heading back down to the valley. 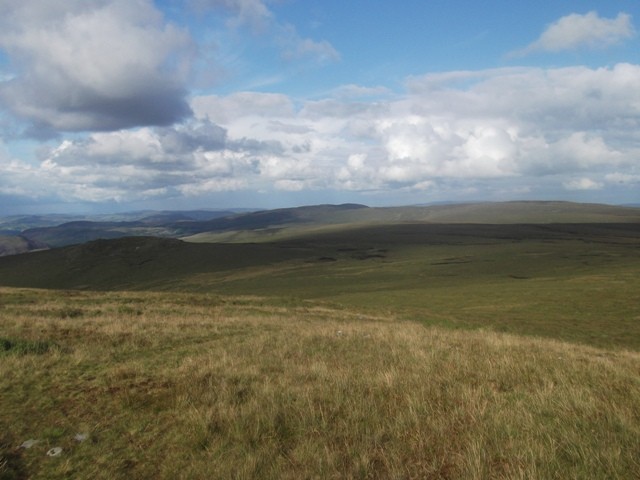 View back to Gorllwyn (R) across the moor 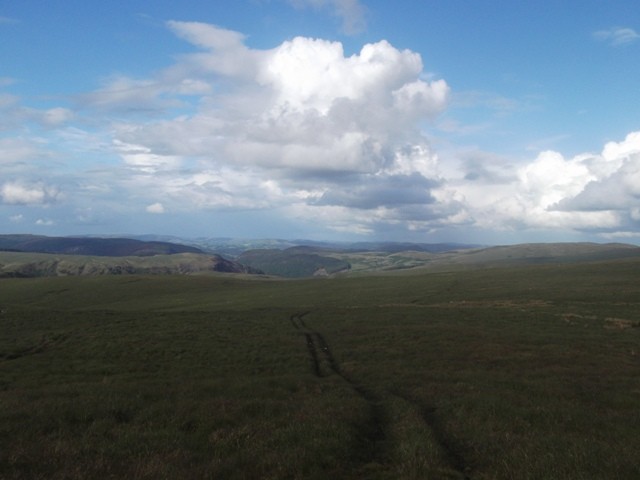 Mine track down to Claernant valley Craig y Llysiau from near end of walk

Perhaps these will never be anyone’s favourite hills (and the stretch in between them is strictly masochists-only stuff), but this is a surprisingly beautiful area and both the ascent and descent paths (especially from the valley up to Drygarn Fawr) are good and enjoyable ones. Climb the two separately, either as ‘there-and-backs’ or finding shorter circuits, and they’re well worth the detour off the beaten tracks.

Wow, the four miles of bog-hopping between the summits does sound like purgatory - but I guess it has to be done unless these two are tackled as separate peaks. It does look like a remote yet picturesque area though, judging by your photos. Still, I don't think I'll be adding these to my to-do list any time soon

Excellent report as always, and congratulations on completing the Welsh Hewitts

Yes, well done poppiesrara - I was half expecting that this report would be coming through any time now and it's been interesting to follow your progress over the last few months.

So what's next? Now that your welsh hewitt map is all blue are you going to set yourself a new challenge?

Nice job! Not quite as dramatic as some of the others, but still quite beautiful. Bog-hopping sounds like it should be a new endurance sport.

john923 wrote:So what's next? Now that your welsh hewitt map is all blue are you going to set yourself a new challenge?

Well, I guess it's probably the rest of the (English) Hewitts next... or at least the Lakes ones first; some of those North Pennine ones can wait until (or if) I've worked up an appetite for that newly-invented 'endurance sport' again! There are a handful of Welsh peaks worth avoiding (I'd nominate Pen yr Allt Uchaf, Black Mixen, and especially Arenig Fach - the only one I've hated everything about...), but I suspect there might be a few more than that in England. The thing is that you have to climb them to really know...

But it's not going to be quite as quick or as single-minded as the Welsh effort, and there are other areas to sample too (some of the coast-paths, Scotland of course) - apart from walking near home, until today (Kinder Scout - definitely the only 'mountain' that's climbable from here after work!) I'd hardly been anywhere but Wales this year... Perhaps 'before I'm 40' as the new target then?

As long as you're still walking...wander wherever your legs will take you! I shall forever give your trip reports credit for changing my poorly preconceived notions of Wales.

Would love to see some of those coastal walks too. Cheers!

Congratulations! Looks like you're done (in Wales at least), and thanks for a great series of reports - mainly on the less well-known hills

. Having walked extensively in northern Snowdonia while growing up, this has been a bit of an education in the bits I missed out on.

I have done Drygarn Fawr though, and I agree that the valleys around here are incredibly scenic.

well done!!! I also Hope to Complete the Welsh hewits in the next 2.5 years before leaving the UK for good. I wanted to get 100 munro's in the bag but no chance. oh well there is always Christmas hols

Many congrats on your Welsh Hewitt completion poppiesrara - and a huge thankyou for all the superb reports you've put out along the way!