More from the lowlands on the Norfolk Coast Path; a second day to complete the path on tiring legs…

our_route.gpx Open full screen  NB: Walkhighlands is not responsible for the accuracy of gpx files in users posts
After a night beneath the stars and pines in the woods, onto the vast expanses of Holkham Beach – at its busiest time, most of this enormous area looks deserted; at daybreak even more so. Photos don’t really do it justice, but it has a definite beauty - there are miles of desert in a straight line to the sea at low tide, and you can walk beside the dunes for hours without seeing a soul. After a couple of miles over the white sands and dunes, you pick up a good path along the floodbank through the tidal creeks and wet marshes to the tiny harbour village of Overy Staithe, thick this day with sailing boats setting off to catch the best of the morning tides. Near Holkham Gap at daybreak Sadly the next stretch – like the end of the previous day - is another unvarying slog, on a bank through the green marsh for several leg-testing miles, but then there’s a nice part-boardwalk path skirting the bottom of the carefully-tended gardens of the Brancasters with harbours and creeks to the right. Burnham Norton across the marsh The Path then leaves the coast for a while, inland along country lanes and green tracks on an apparently little-trodden part of the route. There are some pleasant country views from the top of the rise (little more than 50m up, but it feels like a proper hill with this many miles in the legs!), but it still feels good to rejoin the coastline and head along the popular path through the nature reserves of Thornham marshes and Holme dunes. Plenty of evidence in the little hides and ubiquitous binoculars that this is prime birdwatching territory, but it's also quite a nice varied stretch of walking through wetlands, woods and sand-dunes. Sea view from the inland path 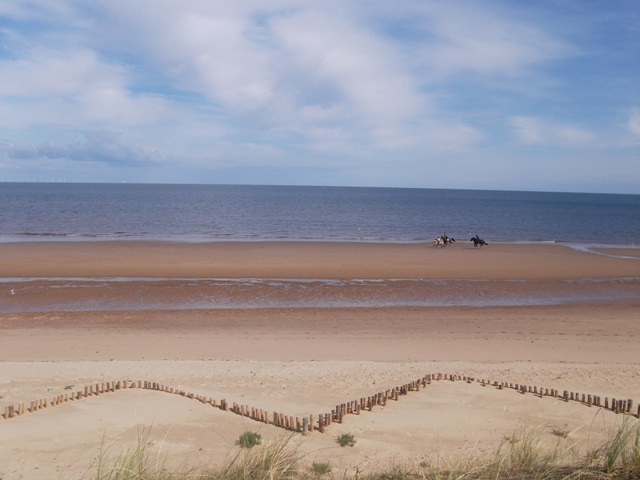 The waymarks on the ground now diverge from the map, heading coastside of the golf-course on a raised path through the dunes – it’s very pretty, with mixed and colourful vegetation and constant views of the beach and sea, but also really hard going over deep, shifting sands… After that, the easy short grass on the busy Hunstanton Promenade feels kind on the legs. Lots of care has gone into the gardens along here, and the beach is still lovely, but the town centre is increasingly, and very noticably over the 30-odd years I have known it, sadly fading into obscurity as its Midlands market hits the Med instead… Probably quite an esoteric choice for a couple of days’ walking (and a lesson that while this many miles in a day might be achievable, it’s perhaps - in the last yards at least - a bit too much to enjoy…), and one that no-one else here might ever take… And, inured to hill-walking over the last months, some of the long flat stretches make you realise how much the target and motivation of the next summit adds to even the rougher of routes. But, while there are some parts I’d never go back to, there are some terrific and varied sections to try for shorter walks: from Beeston to Weybourne, Wells to Overy, and Thornham to Holme… Meanwhile, I'm likely to be somewhere a bit higher up again from now on…

Ye Gods....takes me back to when I was working down there.Nearest thing you could call a hill was that knobbly bit at Ely

Can't argue with that!! Sometimes good to have a reminder why most of us spend our time on hills instead...