My wife and I were visiting our son and his family in the north of Ireland. When we get the chance we like to take in a walk whenever we can and on this occasion we opted for Slieve Donard, the highest top in the Mourne Mountains at 853m (about 2800ft). The grandson was keen to accompany us on this relatively easy , if sometimes steep, walk. So there we were - Oldman, Son of Oldman and Grandson of Oldman - very nice too!!

We set off nice and early (too early) from Armagh in cloudy conditions but as we approached the Mournes the cloud seemed to fragment as forecast but hung on grimly to the mountain tops. Nevertheless we were confident that it would disperse fairly quickly once the sun got a bit higher in the sky.

Although the Mournes cover a relatively small area they are rightly designated an 'Area of Natural Beauty' and, although widely used, retain a wild and magestic charm.

Our starting point was Newcastle which is situated on the coast so we were starting from sea level giving us a minimun ascent of 2800ft plus any extras. We started up through the woods following the Glen River. The path was quite steep but good and the woods beautiful and there were of course little waterfall which added to the interest. 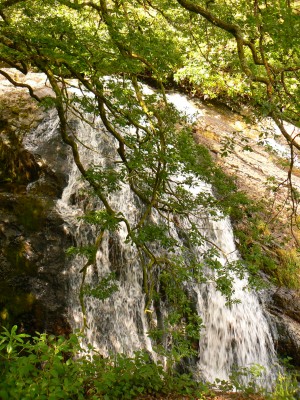 It didn't take long to clear the woods and get onto the open hillside where we were treated to the first views at the head of Glen Valley. The hills either side were shrouded in low cloud and the climb up to the col looked steep.The path however was well constructed (it has to be considering the traffic it takes) which made for fairly easy going. Looking back we should have been able to see the Irish Seabut it was rather hazy and no sight of it could be seen at that time. 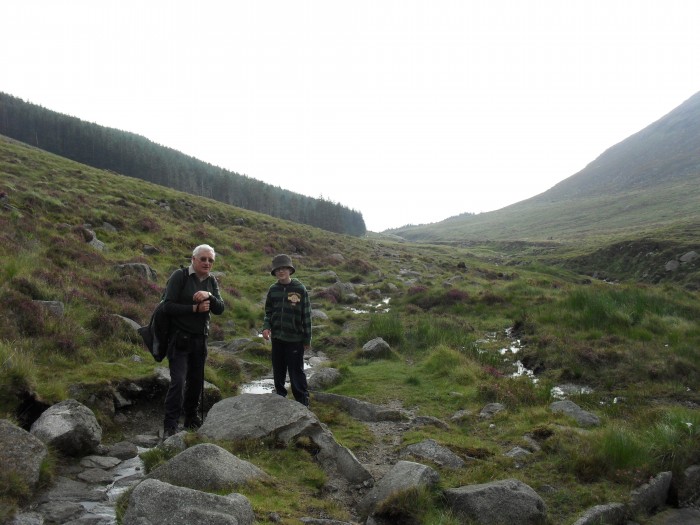 A bit hazy to see the sea

As we got to the head of the valley and forded the River Glen on stepping stones we were now faced with the steep climb up to the Col. The path was reminiscent of the climb up to the beallach on the Wee Boochle - steep. Not so steep for young ones but very steep for me!!

On reaching the Col we met the famous Mourne Wall. This is a circular wall around the Mournes which encloses the catchment area for the north of Ireland's water supply and it's purpose was to keep livestock and other unwelcome visitors from contaminating the area (here was me thinking it was a navigational aid for walkers). It is a magnificent 'dry stane dyke' structure about four feet high and eighteen inches thick. 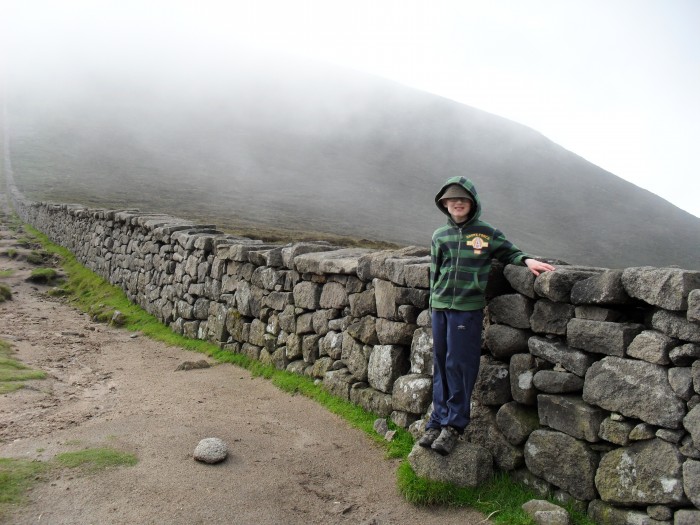 This is the wall Gramps Turn left at this point and it's straight to the summit on a rather steep incline which left me 'cream crackered'. 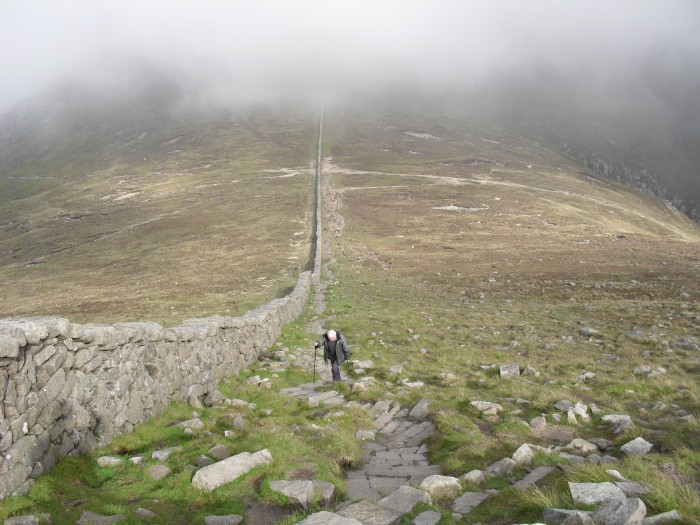 After much puffing and panting I caught up with the other two at a mist shrouded summit - twice I've been up there and never saw it yet. A picture on the large cairn and then a bite to eat. The wind at this point was strong and cold and the cloud came and went so quickly there was no chance of any meaningful pictures. As we sheltered behind the wall we were suddenly joined by a young lady dressed only in running gear. She refreshed herself with some sort of high energy liquid (jet fuel or something) and said she had come up from Newcastle - in fifty minutes. Without further ado she set off again to ascend the second highest top in the Mournes, Slieve Commedagh. When she had departed we looked at each other incredulously - Fifty Minutes? It had just taken us 2 hours and 50 minutes and had nearly killed me!! It wasn't jet fuel she was drinking it was rocket fuel!! We were then joined by another lady - it had taken her a whole hour but she was hampered by her dog and presumably couldn't get hold of any rocket fuel although she did give her dog a drink of some clear liquid which had neither odour or colour - could it have been water? I want some of that water!!

Eventually we got fed up waiting for the cloud to clear and set off back down the way we had come taking in some excellent views as we decended. 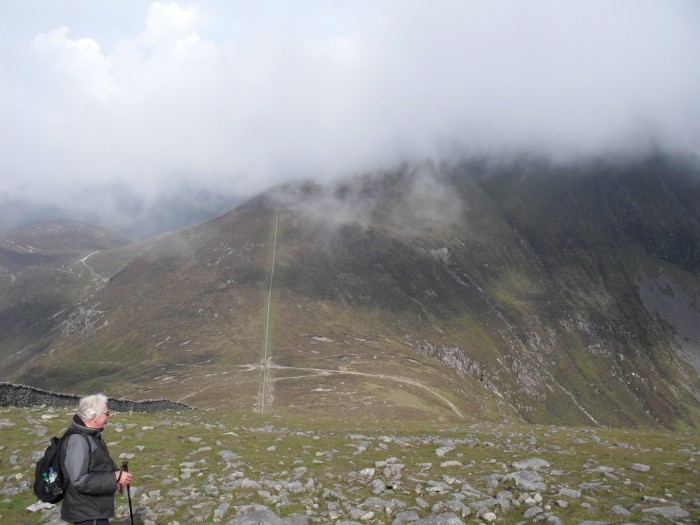 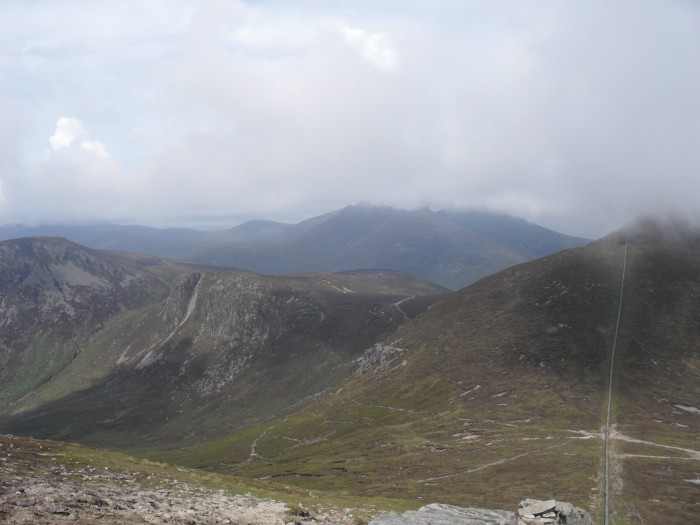 When we got down to the Col we decided to head up the hill towards the top of Slieve Commedagh to try to get a good view of Donard which had just decended. In the event we only got a few hundred feet when we saw the cairn coming and going in cloud and the top of Commedagh doing the same. As we had promised our wives that we would have a BBQ in the afternoon we decided to head back down happy that at least for a short time we were the highest three people in the north of Ireland. As always happens of course, as we got back down to the river crossing the cloud broke completely to give some splendid views in every direction. 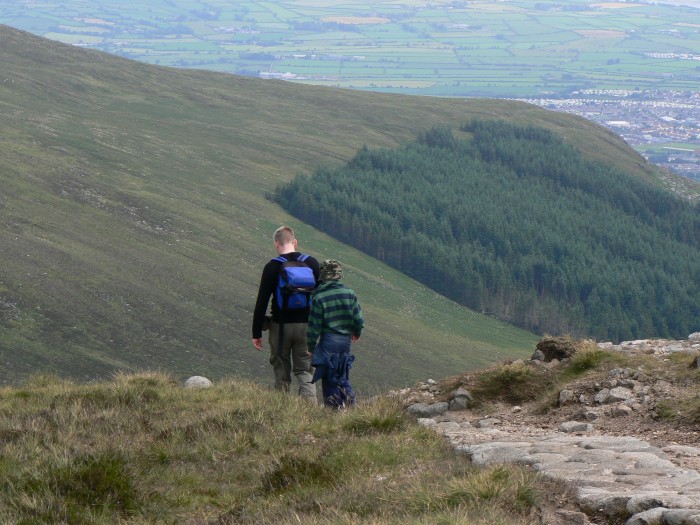 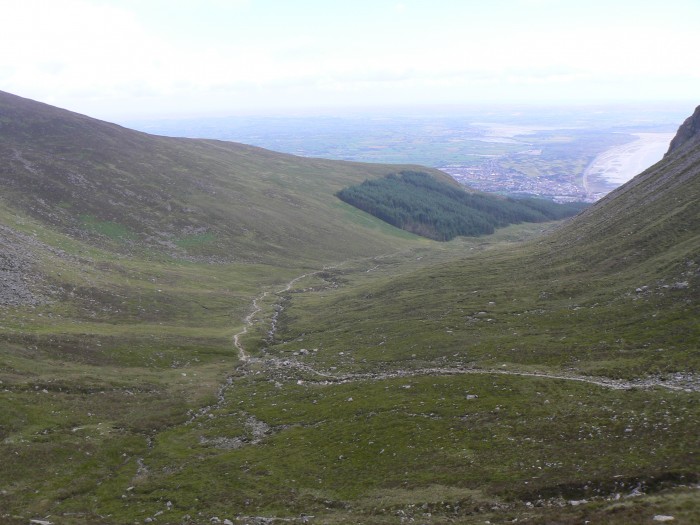 And I was happy to dunk my overheated feet in that cold crystal clear water. So finally it was back down into the woods where a nice lady offered to take the picture of all three generations and, if I say so, it's hard to tell the difference - when's that optician's appointment? Then back to Newcastle for an ice cream and cold drink before heading back to a well deserved meal and a few beers to end a fantastic day. We were all more than satisfied with our efforts - our total ascent in the region of 3200ft, not bad for us all especially Grandson of Oldman - well done! 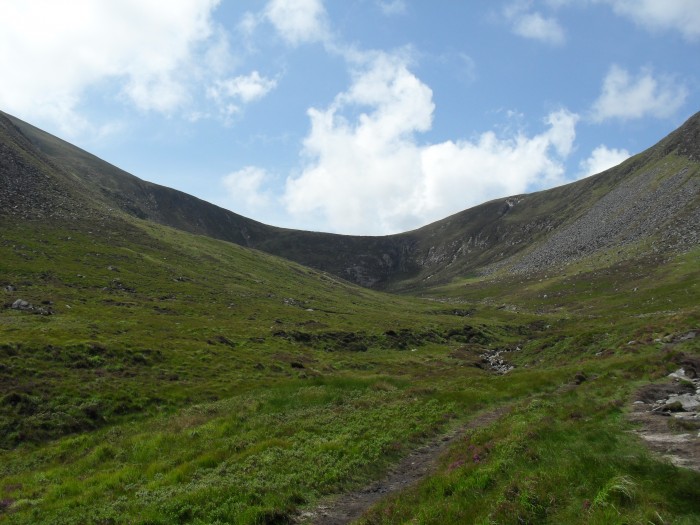 Really liked the title of this report and enjoyed reading it very much.

Have never been to Ireland and didnt know there were such high mountains there.
Well done to you all on a great family day out

Not bad, indeed! Now that's my idea of a family day out! Tough break on the cloud cover. You still managed to get some good pics, though.

From my geography lessons many years ago, isn't the Mourne mountains in Northern Ireland ( as oposed to the 'north of ireland) '?

Belgian_Hiker wrote:From my geography lessons many years ago, isn't the Mourne mountains in Northern Ireland ( as oposed to the 'north of ireland) '?

Are you sure that wasn't history lessons

Belgian_Hiker wrote:From my geography lessons many years ago, isn't the Mourne mountains in Northern Ireland ( as oposed to the 'north of ireland) '?

I have no intention of indulging in either semantics or politics but from reading a simple map of the island of Ireland it is clear that the Mourne mountains are in the north or, more correctly, the northeast whilst e.g. Macgillycuddy's Reeks are in the southwest. By the way, there are some splendid walks in Macgillycuddy's reeks and in fact the highest mountain in all Ireland, Carrauntoohil at 1038m, is in that range.

Just thought you might appreciate a wee geography lesson. Get yourself over to Ireland and enjoy the walking and the Guinness.