Picked up the Alternative Pennine Way again for an exhilarating stretch along the eastern edges of the Peak District. A continuous line of gritstone crags runs for 15 miles along the Derwent valley. There are hundreds of rock climbing routes. The edges were worked in the past for millstones and in many places you see them lying around like giant polo mints. The name of eagle rock has nothing to do with eagles. It's apparently named after a saxon god called Aigle who was in the habit of throwing big rocks around.

The scenery really picks up when we reach Curbar Edge which drops dramatically down to the Derwent Valley and has some impressive overhangs and dramatic contrasts between the pastoral valley below and the crags and heather above. Froggatt Edge is less dramatic but gives a pleasant easy walk down through birch woods. We stop at the Grouse inn for some (non-alcoholic) rehydration. Note anyone considering using this as a lunch stop beware - you might not be able to move in the afternoon - the portions looked huge.

After the Grouse we headed through Longshaw Country Park - An odd place to find at 1000 ft above sea level - all kids on bikes and pic-nicking families. Then headed back up to the edge over Carl Wark and Higger Tor; Some entertaining scrambling up these two. Incidentally whoever was letting their dog chase sheep around on Higger Tor should be ashamed of themselves, firstly for the impact on livestock, secondly for putting their dog at risk of being shot and thirdly for taking the relationship between farmers and walkers back to the bad old days. Anyway, moving on, as we move northwards, the scenery becomes wilder and the views become wider. Stanage Edge is the high point. The view out to the east appears. Really long views out over the Midlands and Yorkshire - Drax Power Station painted a feather of cloud. Blue shadows on the far horizon might have been the Lincolnshire and Yorkshire Wolds. Back to the uplands, the crags become more dramatic. 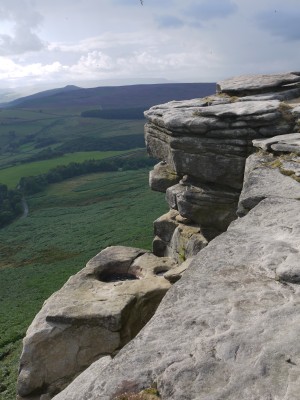 It had been a long day and it was time to break the walk. We dropped off the edge on a horrible eroded vehicle track that had been hacked about by the 4x4 brigade and headed down a lane to Bamford. Incidentally the rough lane going down into Bamford is incredibly steep and consists of bands of rock worn smooth by landrovers. It's actually quite a difficult descent.

Next day we drove back up the lane. There was a good path up through the bracken and got us back up to High Neb which was crawling with climbers. The wind had got up as we headed along the edge and dropped down to the A57 at Moscar. The old road gave a good route down to Cutthrough Bridge. Although long disused there were still milestones. We snatched lunch in a rare spot out of the wind at Cutthrough Bridge before heading across the moor. Eventually a fine aerial view of Ladybower emerged. One had been converted by the National Trust into a shelter with a rather fine view. Finally came down to the water to the site of the drowned village of Derwent and a pleasant walk around the lake to the visitor centre at Fairholmes and the cycle ride back to Stanage edge for the car.

Some beautiful shots there, Dan (or Ice??), from an area that I'd never otherwise have really considered exploring... Lovely stuff.

There's a lot more in the Peak District than you'd think. It soaks up the people much better than the Lakes. See my report on Bleaklow.

BTW I've enjoyed your reports on the lesser known hills in central and south Wales. They are a long way from my home territory but I'll get down there one day.

I do a fair bit of walking in the peak district as I live in Huddersfield, which is near the northern end of the district. I was on Bleaklow last week and didn't see anyone all day.

Great pics iceman, I'm originally a Leeds lad and spent many years living in and around the area, really brings back a bit home for me. It's easy to forget how beautiful our nation can be wherever we are within it, thanks for sharing

Good effort and nice to see a report from the Eastern Edges. I've been making early morning trips to this area when visiting my mother in law in Sheffield at weekends. The continuation Northwards along Derwent Edge is a fine walk - I had a great day on it in snow on New Year's Eve. Must post a report some time.

My parents first met on a walking holiday in these hills in the 1950s and so named our family home Longshaw - another reason I have a soft spot for the area (as I wouldn't exist without it!).