First off, kudos to Alan for organising this past weekend. The complex at Swallow Falls was excellent and the pub quiz on both nights was a lot of fun. Also thanks to Polly for the first night's prize - we passed the bottle around as we laughed at Monty's jokes - er laughed at Monty laughing at his own jokes.

Personally, I'd never been to Wales, and with just a month to go before heading stateside for good I couldn't pass up the chance to visit north Wales, climb Snowdon, and hang out with a great group of folks. Nathan was kind enough to pick myself and Kevin up on Friday and we arrived around 8:30, just in time for a few pints before the hilarity of the pub quiz began. As part of the losing team we were handed several cans of Brains - proper Night of the Living Dead stuff if you ask me. Then the Monty Comedy Hour began and we were all treated to an unforgetable rendition of Brown-eyed Girl, or is that Cross-eye Girl, maybe One-eyed Girl, you get the point.

After breakfast the next morning a group of 11 headed up to Pen-y Pass. Upon reaching the start of the path for Crib Goch, several of us sensible folk decided that the Pyg Track looked very appealing . . . and very safe considering the high winds. So while Martin, Alan, Mackenzie, Kevin, and the fearless Monty set off to do the knife-edge ridge, Thomas, Jane, Nathan, Carol, Brian and myself went off for an easier stroll to the top of Snowdon via the Pyg Track. The wind was howling, but the views began to open up across the Snowdon horseshoe and back along the path. Above, the top of Snowdon was still in the cloud, but by the time we got to the summit, had a bite to eat, and retreated into the cafe the clouds began to lift. We warmed up and waited on the others to finish the ridge. After we had all gathered together again, Martin, Mackenzie, Kevin, and the now high-flying Monty set off to finish the horseshoe while the rest of us descended via the Bwlch main ridge. This ended up being a very enjoyable circuit, much better than a return via the Miner's path I am sure. The views down the valley were fantastic - class scenery!

Overall, I was blown away by Snowdonia. Really wish I had not waited so long to get down to Wales, but I'm thankful I got the chance to go and to climb what is a very impressive mountain. To beat all, we had clear views from the summit - a rarity on these meetups! It was good to meet some new folks as well - Andy, Jane, Kevin, Mackenzie, Brian, and Martin nice to meet you all. I'll certainly miss these events when I'm home and I hope that someday in the future I'll be in a position to join in another at some point.

Out of the 194 photos I took on Saturday, these are my favourite shots - Enjoy! 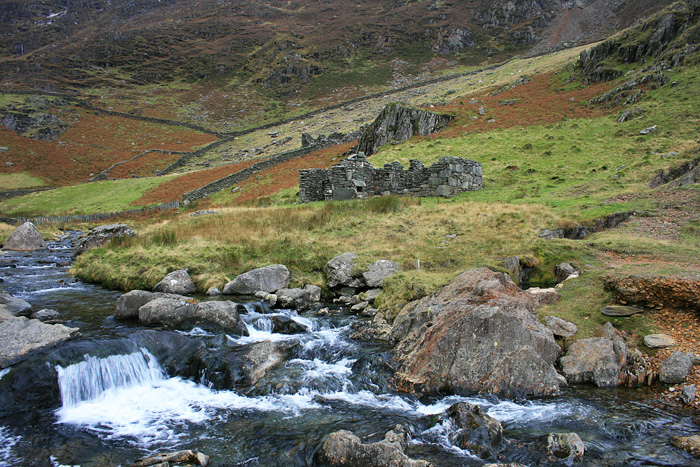 Will get the video on before I read your report.....
[youtube]http://www.youtube.com/watch?v=NVwb1NrDumw[/youtube]

Edit...Ok I'm back, some classic pictures there, just a sample of your nearly 200 that you took! Yes it is a very photographic mountain (not to mention the faces)
So glad you were able to come at the 11th hour, you will be surely missed when you depart back home

I tried to make it one of the best meets, hopefully its up there

Nice report Stretch. Great set of photos. So clear. What a memory eh

Top report and photos as ever, stretch. Snowdonia is a terrific place, at least you got to see it before you head home

Er, you'll still be posting U.S. trip reports in this section until you come back and see us? You'd better be

. Good to see you going down the other side - you get to see a bit more variety that way, especially as I'm guessing you'll not be back up there any time soon!

Nice to see you again, and hopefully you'll keep us up to date with any hiking you get done back home. I always love seeing a report from somewhere different

Cheers Malky, good seeing you as well. I'll have a lot of new gear to take home and will certainly put it to good use. Should see some reports this winter from Tennessee, North Carolina, or Virginia if the weather cooperates.

Good that the summit was clear for you - an hour or two earlier it was capped in cloud.
Nice to meet you.

Such an enjoyable report Stretch

Thanks for posting so many cracking photos, my fave is the one of you by yourself with Snowdon behind you, one for framing?

That is a great report and the photos are lovely, must have been difficult to choose from so many taken. It was a great day and it was lovely to meet so many new people, hopefully I will make another meet next year

Some excellent pics there, Stretch,thanks for sharing! Glad you made it to North Wales before you're leaving; it's great, isn't it? I know what it feels like to leave Europe behind - but sure you are taking some wonderful memories with you!

You had a great day and I'm pleased about that! So boring that you keep producing great photos...but thats not new!!!
Looked a great crowd and so pleased that you got down to Wales.

Great report and pics! What a way to go out, Stretch! Now who's going to interpret Monty's jokes for Gale and I in Kintail?

Oh well...Good luck on your journey back home.

Great stuff of what looks a stunning area. Definately got to get myself to Wales. Liking all the bright colours you guys are wearing

Thanks for posting so many cracking photos, my fave is the one of you by yourself with Snowdon behind you, one for framing?

Yeah that's a fantastic pic. Some would say that photographer deserves an award.....