This was my first foray into Wales and as it was a spur of the moment decision to go I only had time to research Routes up Snowdon. I drove from the Campsite in Llanberis to Nant Peris park and ride and caught the sherpa bus to Pen Y Pass (£3.00 return) and set off up the PYG track.As the weather was fine I decided that I would follow others who were heading up Crib Goch. After a steep scramble I found myself at the start of the Ridge which is a dramatic sight. It is very steep to the left and vertical to the right The ridge was an exhilerating half hour or so with an interesting up and over on the final Pinnacle. Another scramble from the Bwlch brings you to Garnedd Ugain which is only 20 metres lower than Snowdon. Stop here for your lunch You wont regret it. Enjoy the peace while you can. Be warned. From here its a gentle stroll to the railway and the final few yards to the highest point in the U.K south of Loch Lomond.An achievement tinged with being a tad miffed that I had a struggle to get to the summit cairn without tripping over grannies, kids, buggies etc that had been transported up the mountain on the train. Did they care that I'd spent the last 2 and a bit hours slogging my way up cliffs and risking life and limb crossing a razer sharp ridge for this moment? Did they buggery!!
In my opinion Garnedd Ugain is a superior summit to Snowdon as it is quiet compared to the hundreds swarming round it's summit. Mind you the new visitor centre there does have it's advantages such as indoor toilets, some where to warm up and dry out in bad weather and you can get food if you bring money and are prepared to queue and pay the prices. I rate Snowdon as a G.U.S.O. summit ( That's GO UP and SOD OFF, preferably to somewhere quieter).
There's a steep path of sorts from the summit to the bwlch before tackling the last height of the day, Y Lliwedd. A mix of walking and scrambling brings you to the summit atop a huge cliff face overlooking Llyn Llydaw. I followed the edge to the Eastern summit before dropping down to the lake and the miners path which took me back to Pen Y Pass. All in all a superb day and one that ranks as one of my best days out.
Unfortunately my back started playing up so I will have to go back for Tryfan and the glyders another time.
More pics here:
http://www.flickr.com/photos/27538469@N06/ 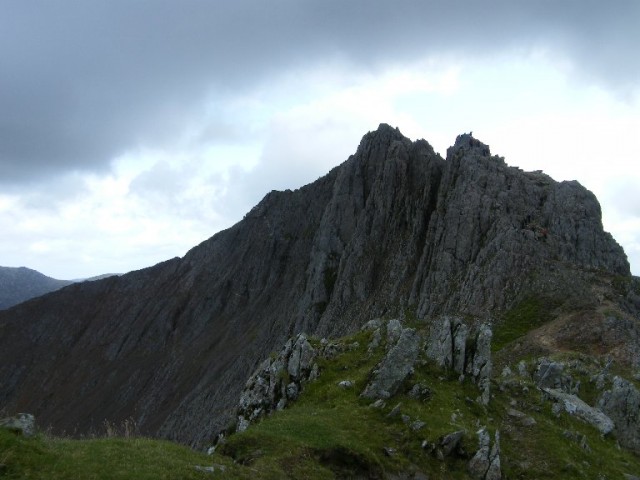 Crib Goch from the PYG track

Cracking report. It's about time I had a go at this one - I must admit I'm a bit unsure about Crib Goch - I've heard stories ranging from the death defying to the sunday afternoon stroll! What's the truth?

You are also clearly of the same mind as me when it comes to mountains and large numbers of people. Good for you.

For me seemed like a Sunday afternoon stroll. But the weather was good

Great report and pics - I have some similar ones from times when I've approached Crib Goch along the Crib y Ddysgl ridge and got pretty near (but turned back as I've been on my own).

If you want to mix with walkers-only on the summit of Snowdon it can be done (I agree the train tourists are irritating) - if you walk down the short spur towards Llyn Llydaw (down the far side from the caff) there's a little flat grassy area. This is where the walkers hang out along with the summit seagulls! Don't forget a little snack for the seagulls - they will eat anything! It's also great up Snowdon when the train has finished and there's just walkers again - I think that's from about the end of September to sometime in March. You can have some great days up there at those times... It's a very atmospheric mountain though and nice if you can get some peace up there...

I did make my way there to take a couple of pics and yes it was slightly quieter. Of course being a clear day midsummer it was never going to be peaceful. At least I've done it and it's ticked off on my list now. I probably won't return there for a good while. Another trip to wales for the Glyders then I can turn my attention to Scotland. Health permitting.