our_route.gpx Open full screen  NB: Walkhighlands is not responsible for the accuracy of gpx files in users posts
I scored 3 days off this week and MWIS was calling for Snow, hail, sleet. lightning, 450m cloud base, 70-90mph gusts and severe windchill.
so I thought better to be working than off for these next 3 days.
Tuesday was a night mare didn't even leave my little cottage, after speaking to Kevin woods he said "nevermind the weather and get out on those hills man"
so I took his advice packed a bag, looked at the sherpa shedule and It looked as if I had enough time to get the last 3 hills in the Hebog range ticked.
from Beddgelert I checked and double checked the return trip bus times and then I was off.
walk starts on a wee road just before the highway hits the 60mph limit on the road to Caernarfon.
as I made this left turn I was delighted to see the top of the Moel Hebog and the sun!! 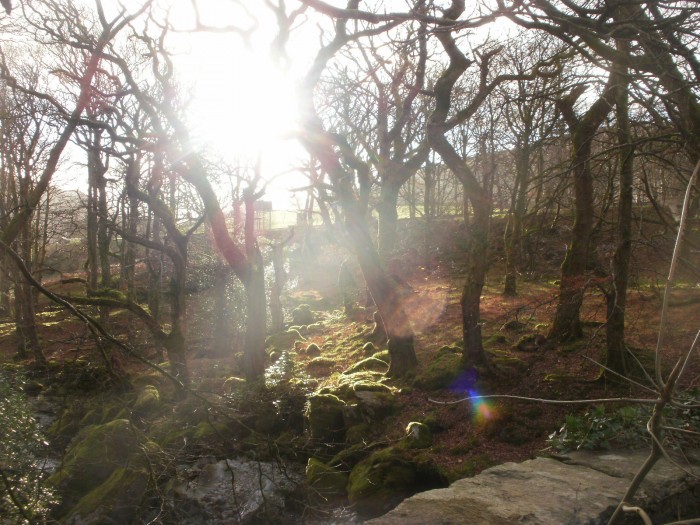 sun making an appearance in Beddgelert 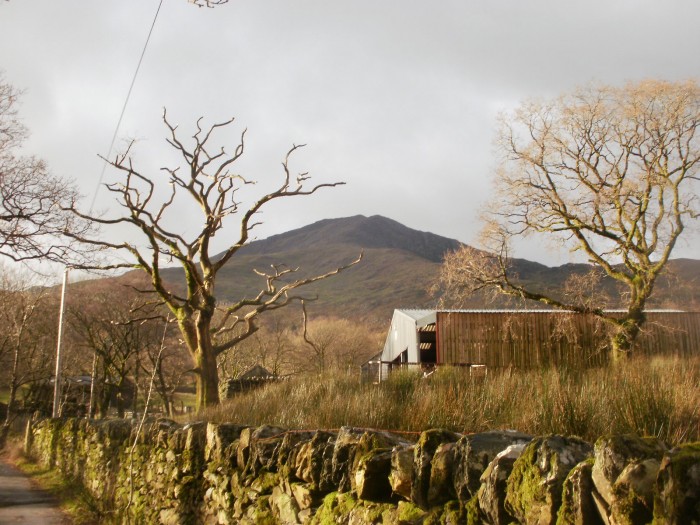 the route starts proper with the crossing of a stile at 98m and it's up up up from here. 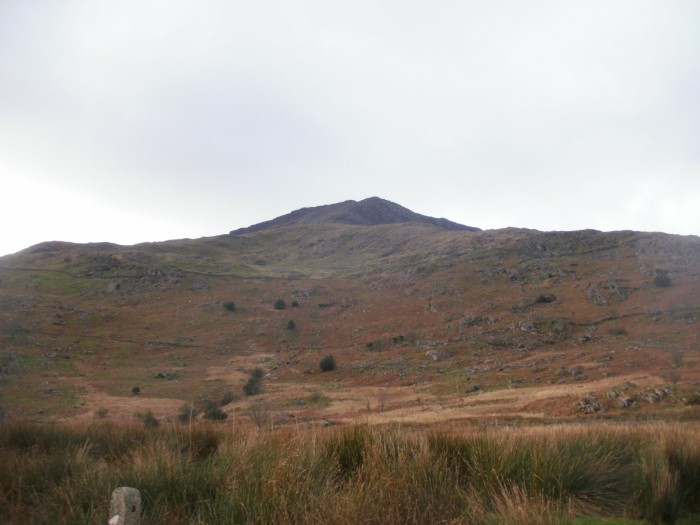 this section of the path was very boggy and was easily lost in the bracken and as the visibility was very good I wasn't to worried and just went for a wander picking out landmarks up ahead and then walking to them.
once I gained some good height at around 300m the ground was solid and any water on the path was now ice
with lots of clear signs that water had stopped up here! 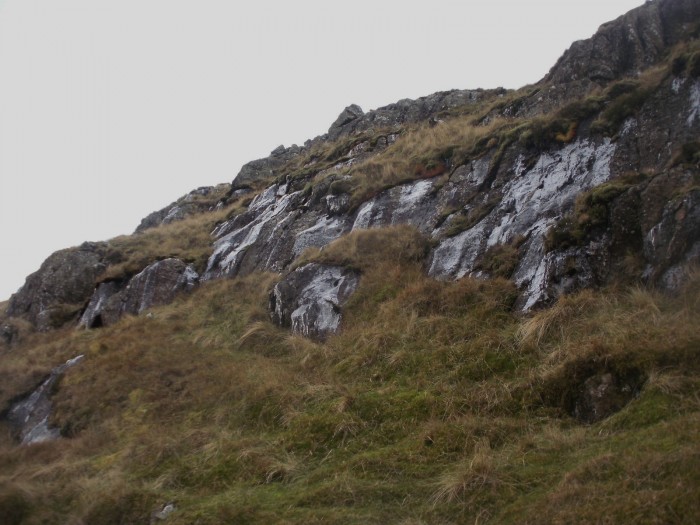 from this point there were lovely views of Snowdon, Nantille ridge, and the Moelwyns. 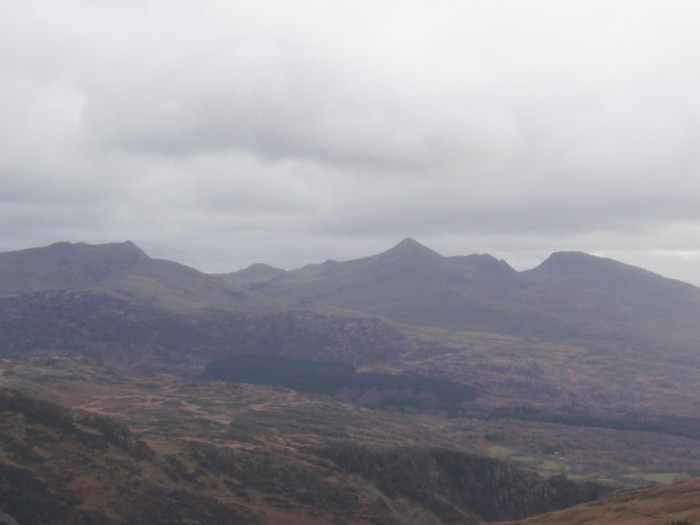 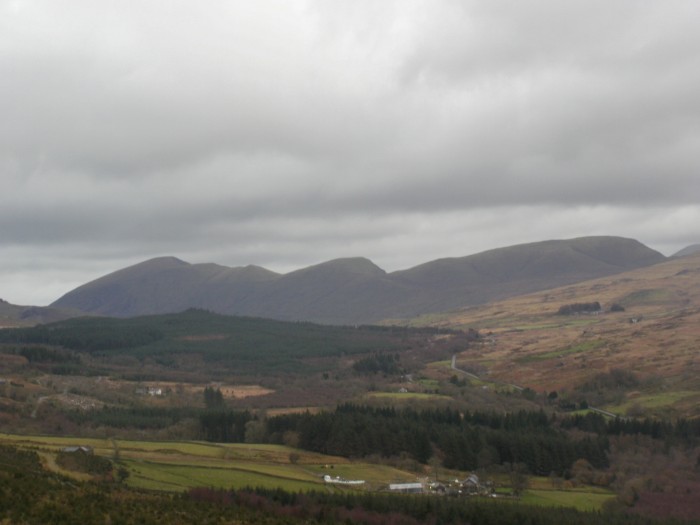 now after the first 300 odd meters climbed I thought i'd be well warmed up and the scrambling and boulders ahead (which is my cup of tea) would make for a quicker ascent than the grass slopes i'd been on below, and I was looking at getting onto the summit in under 1 hour!! 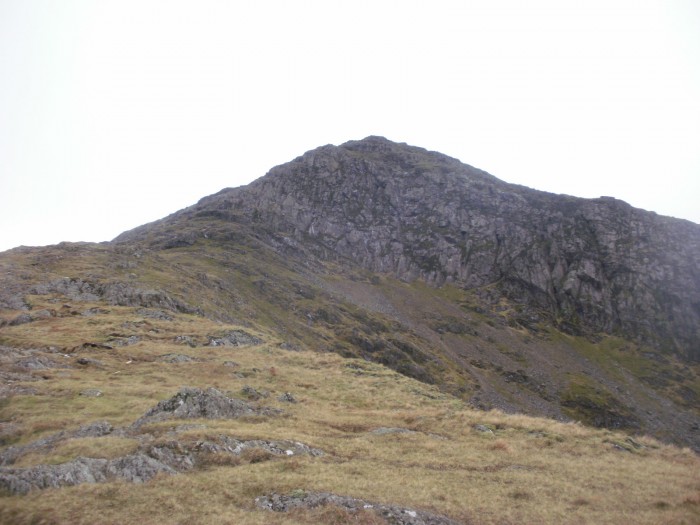 Boulders and scrambling lay ahead

boy was I wrong I was knackered constantly stopping for a huge yawn of to catch my breath i was getting a real rage on as my progress had slowed down greatly!!!
in this section of the walk I came across some incredible looking boulders which looked like bubbling lava of something at first so I took pictures of them of course!! 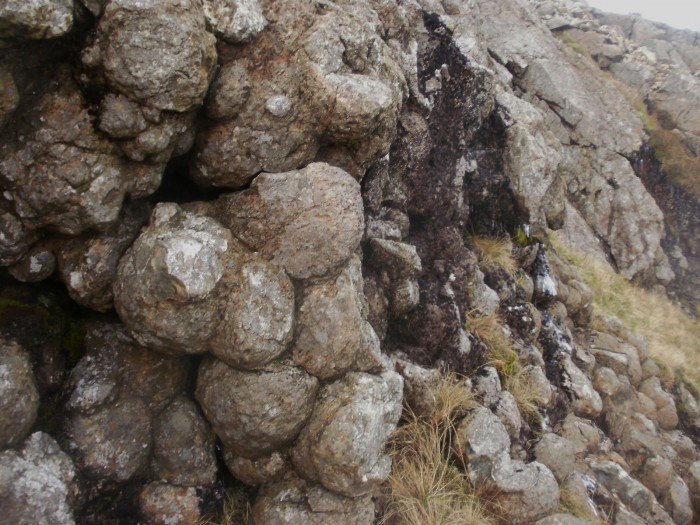 Once I reached the cairn just below the South buttress I knew I was there! I'd soldiered on! and was on the home stretch!
at this point I realized that I had been out the wind the whole time and the windchill hit me coming off the Irish sea it was bitter!! I threw the hat on and it did me some good as I was hot from the climb. 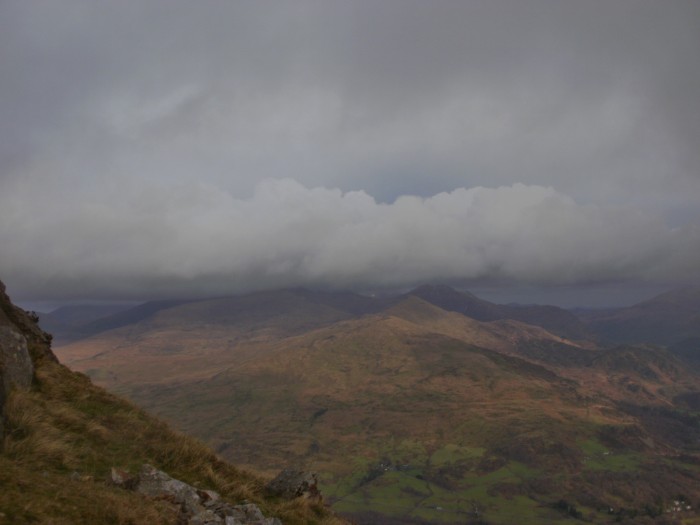 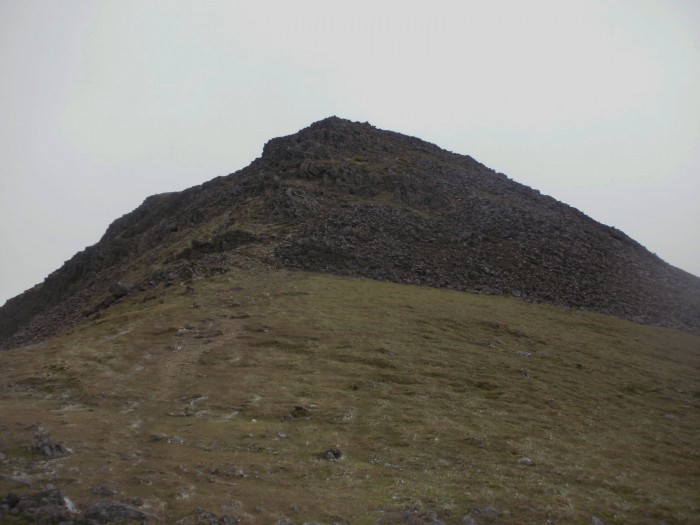 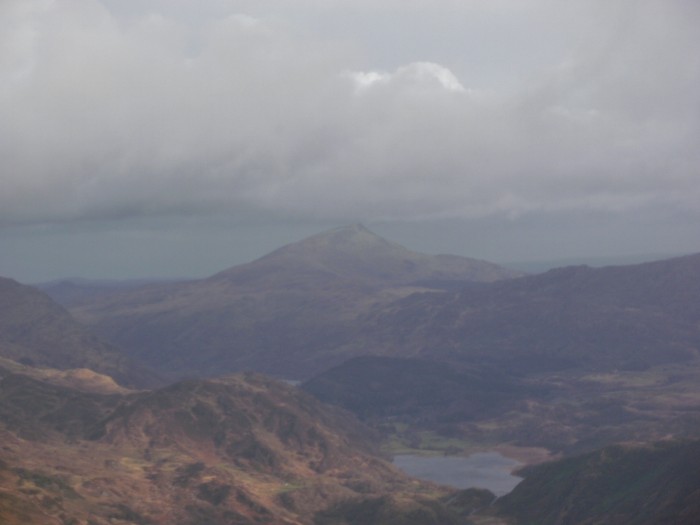 a few steps further found me on Moel hebog Summit looking at... nothing, the cloud came in just as I reached the summit and then cleared again once I left, oh well I got enough pics on the way up. 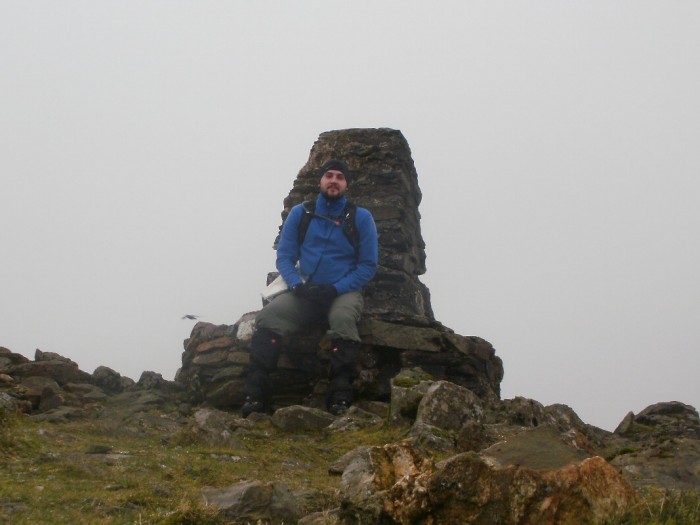 Me on Moel Hebog 1hr 20mins 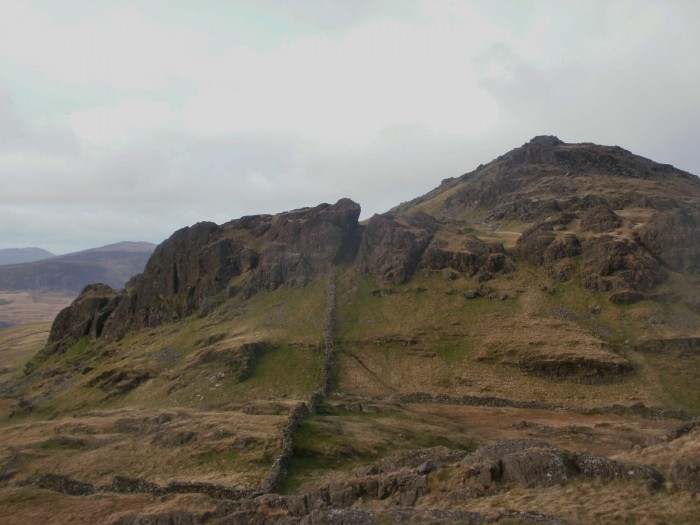 not stopping here as I was on a tight schedule I took me pic and headed NW down towards the bwlch meillionen and then on wards to Moel yr Ogof.
it was a very steep descent on frozen grass and care was needed so I didn't reach the Bwlch any faster than I wanted. 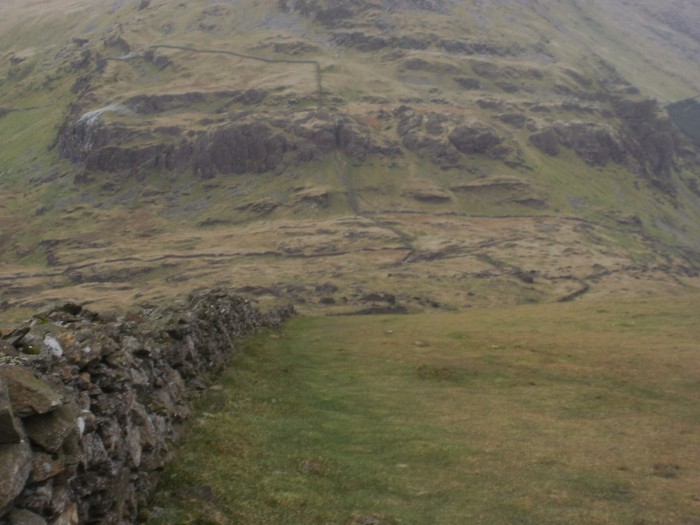 The Bwlch was found quickly and I quickly started my climb up Moel yr Ogof.
this next feature on this route makes you wonder was the path cut out of this crag or is it natural? I passed between and turned to take a picture of Moel hebog. Looking back to Moel Hebog

Moel yr Ogof was quickly reached after another very small Bwlch (this one had a dead posh walkway!!!)
and some quick scrambling. upon reaching this summit the wind had picked up and the temperature had dropped slightly making it very cold indeed.
I stopped and grabbed extra gloves and continued I had done two of the three and had only been on the go for two hours making good time!! the walk over to Moel Lefn was so uneventful that I don't remember it and it was only yesterday I was probably just keeping my head down and trying to warm up in that bastard cold wind.
I had been warned about the descent on this which can take you off a sheer drop if the right path was not chosen so I stuck to the left side of the ridge and found a very worn but very icy path dropping to the Princes quarry below.
glad to be out of the wind I stopped here and consulted the map for a route out I was looking for a right of way path heading E back to the highway through the Beddgelert forest. the way was very boggy I had been wearing gaiters all day and they were finally being put to good use.
I kept the map handy as these paths weren't very defined and very eroded so I could have easily lost it in the forest, I counted the times I crossed the forest track and then the welsh highland railway and then one last field until I was on pavement. a quick change of sweaty socks for non-sweaty ones was in order and a couple of miles of highway later I was back in beddgelert trying to spend money that no one wouldn't let me spend.
caught my 16:25 bus back to Betws-y-coed and was in bath for 18:00!!

thanks for reading everybody.

Great stuff Mac, really enjoyed this and the photos - good call to get out and about despite the weather, you snatched a good result!

That path through the rocks is a bit different!

Really enjoyed this report and some good photos

Nice - evil looking clouds but looked OK where you were

Oh god you really meant like the weather had nothing to do with the forecast. Good report, those rock shapes are great. They look natural, but you can never be sure in Wales..

And I like the wee satisfying blue splodge on your map

Glad to be the banisher of storms... that said it's snowed several inches in Glasgow out of nowhere tonight!

Also, Moel Hebog is a great name. Sounds like it should be in Middle Earth or something.

Kevin29035 wrote:And I like the wee satisfying blue splodge on your map

Was pleased for you that you were able to get out for this one before Christmas, as I knew you were dying to do it.
At the beginning of the week it looked very doubtful weather wise that you were going to make it.
Looks like you had a good day.
Good spot for a wild-camp on Hebog's summit eh?

great report and some beautiful pics, but that one of Snowdon clearing toward the end is a real stunner, great sky and great result on the weather overall

Good report, Mackenzie, and brave to take it on given that forecast!

Did this one at just about the same time last year & found it fairly terrifying... (Imagine ascending your picture of 'Icy rocks' with about 5m visibility and a growing sense of being on a wrong path that might lead nowhere... And that descent isn't too comfortable when just wet rather than icy). It does look a bit nicer with views though!

malky_c wrote:Not done this walk for years - that walkway never used to be there

Likewise, but then it's at least 10 years since I was there last...

Our walking club did this route yesterday. A superb little route enjoyed by all of us. We battled very high winds, but despite the adverse weather, it wasn't too rainy, and views to the Nantlle ridge and Snowdon were available.

Some new paths meant that the return to the car was off road which was nice. We managed to use forestry track which ended us back on the approach to Moel Hebog by a barn just after walking under the railway.

Thanks for a great route.