our_route.gpx Open full screen  NB: Walkhighlands is not responsible for the accuracy of gpx files in users posts
so roll on the the new year and the first new ticks of 2012!!
with me heading across the pond and not returning to wales until February I wanted to get the first ticks done before hand.
I only have the Moelwyns and the Blaenau Ffestiniog Hewitts left to do in the Snowdonia park so I though i'd get to them and head to the Manods.

I recruited every ones favorite Welshman Adrian Jones and guy Hill also wanted to come along as he lives in the area, likes his old quarries and, has been wanting to check out the Manods for a while.

we got a dry window in the weather and it would be my first trip over the Crimea pass to Blaenau. The stories were true the place is grim and dark and grey and it wasn't just because we are in winter it's apparently like this all the time!!
we collected guy at the train station and reached the first hurdle of the day; no one had a proper copy of OS18, I had Compass and GPS but no map. Guy had brought a Photocopy of his OS map and this would have to do, we were confident as the cloud base was thick and not supposed to dip below 3000ft.

so not really knowing where to start we headed for an the first disused incline we could see and took it...up.
using these Incline we gained a lot of height very fast and we foud ourselves in the quarries in no time. the wind had picked up and we were getting some of those 70MPH gusts that were expected. we stopped just before an old building to look across the valley to the Moelwyns. 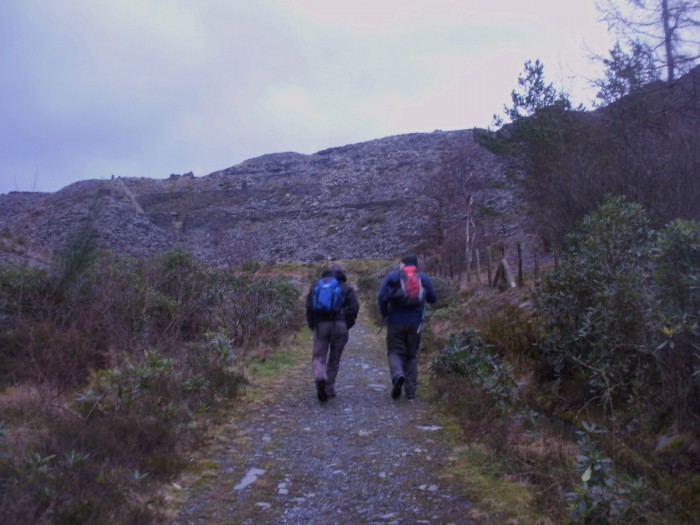 starting up our first Incline 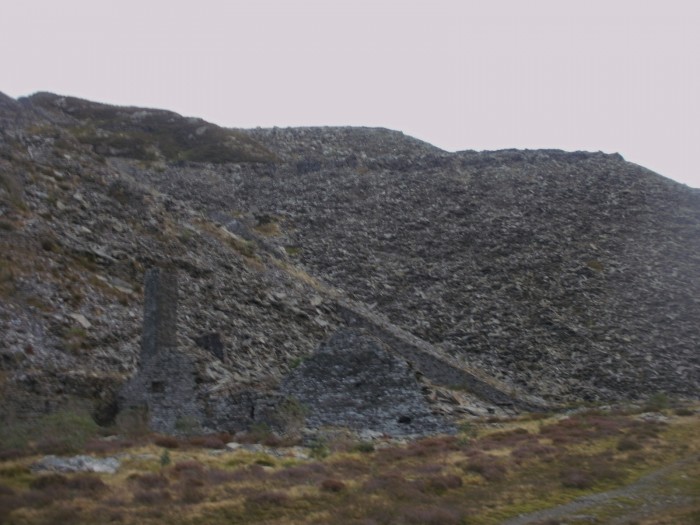 the first ruin we come across you can really see the amount of old slate knocking about.

as we walk up guy tells the that the workers who used to climb up here every day little over 100 years ago, achieved 96% waste with the slate that was quarried out of the mountain. One can only assume that the slate piles we were now walking on is all that waste. 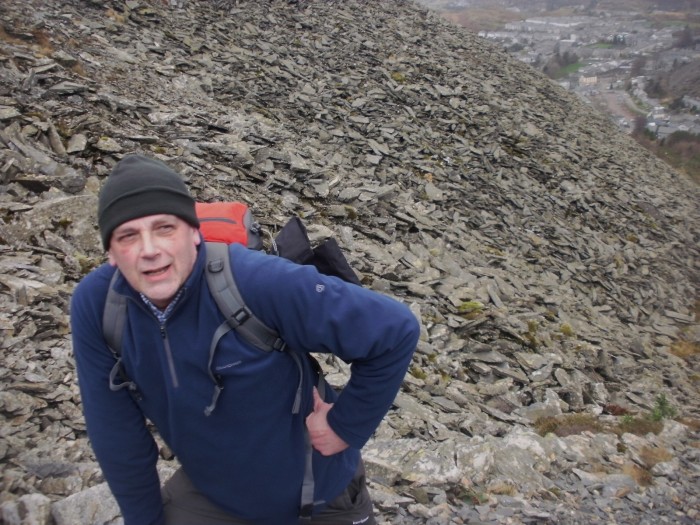 Guy and a bit of Slate 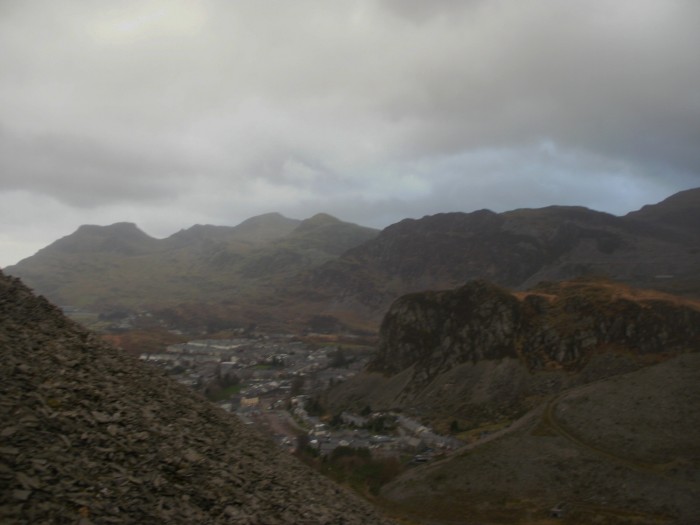 Looking across the Valley to the Moelwyns 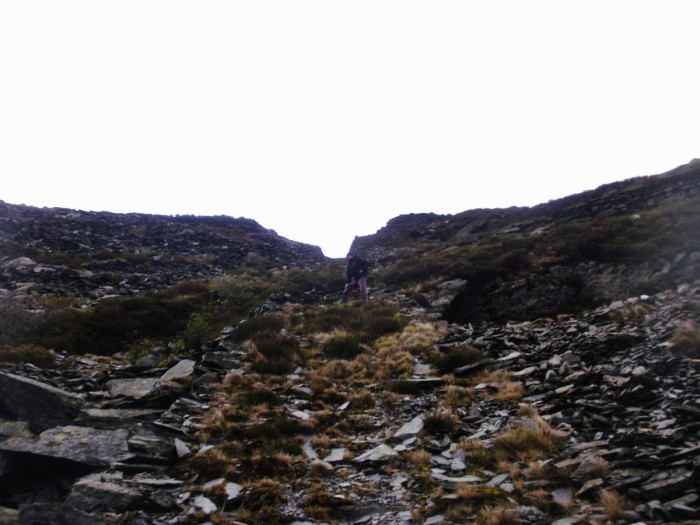 Ardian heading up one of the steep inclines

after all the inclines we walked we found ourselves at a very large ruin the mountain seemed to have flattened out a bit here and we had a wee rest. 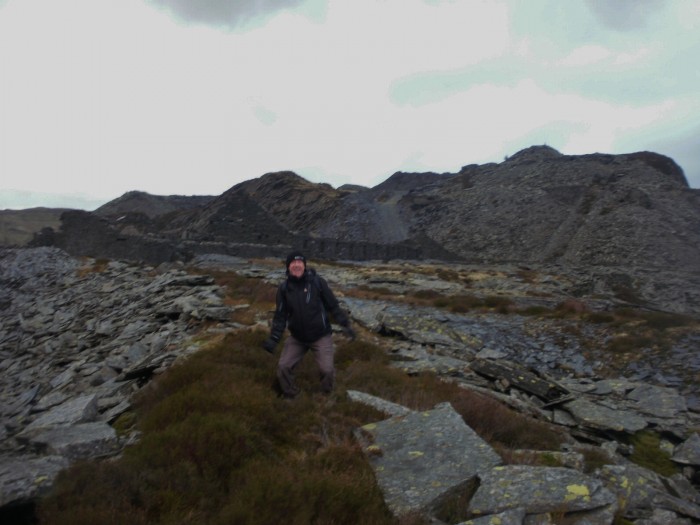 Adrian on Plateau with slate quarry ruin behind.

it was here that we also got our first look at Manod Mawr and it's N top.
and we were a little far north so we decided to do the N top first then Manod Mawr and then down. 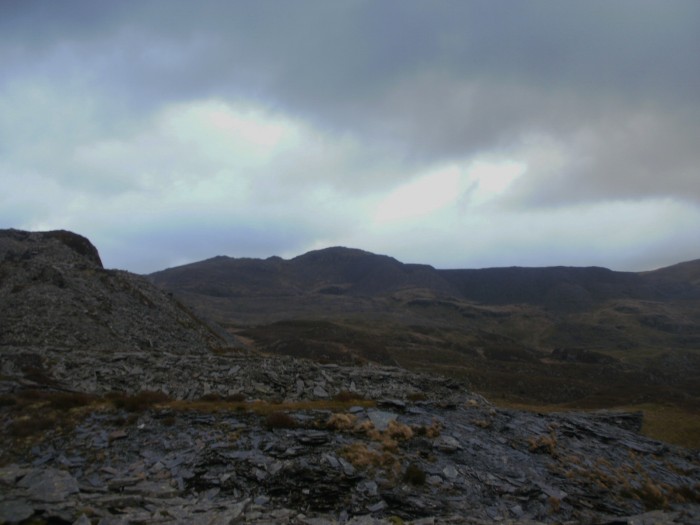 we continued and wanted to find a goo path leading to the N top we decided that we were to high up and had to descend a steep heathery gully which was kinda fun maybe not for the old buggers but it was good and we all survived.
we were now on a proper road and could clearly see the way to our first hill, once again the views across the valley were great. 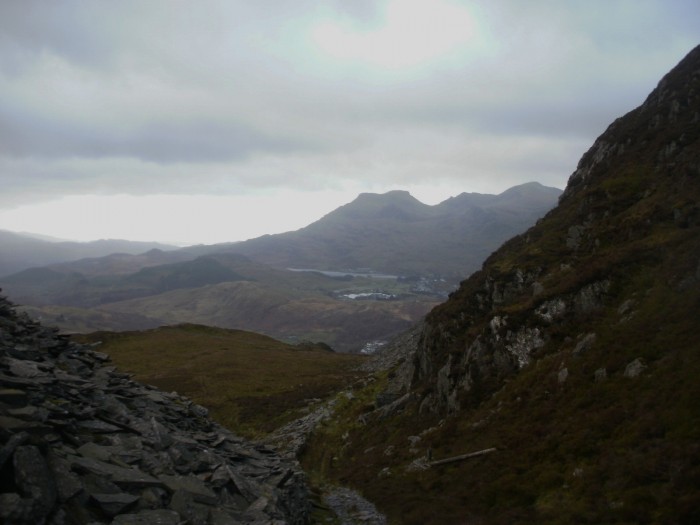 Moelwyns. to the right is the slope we climbed down. 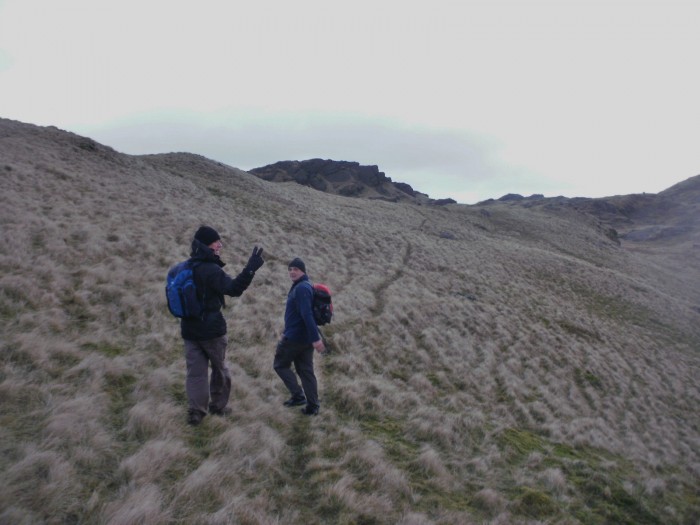 as we changed direction for the climb we had the wind at our backs and quickly realized how out of the wind we were in the quarries, we now now on hill side and getting blasted.
we reached to top in what seemed like 30 minutes it was an absolute doddle.
we got our pics done and had spotted Manod mawr and the route over. 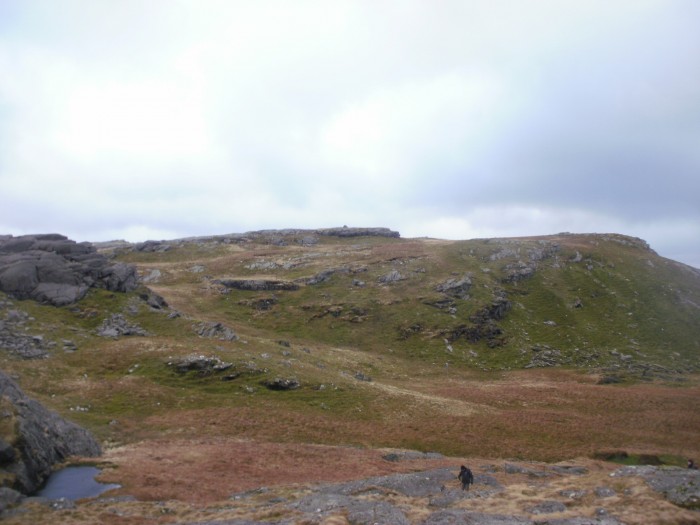 the next section was the saddle over to Manod Mawr and this was a bit of a shocker for me the qurries on the S side reach all the way up to the summit of the N top! we walked off the summit and found ourselves on a slate road. all colour had been removed from this walk and everything was now dark dismal and grey. we quickly made our way along the network of roads around a wee reservoir and then onto the start of the next hill. 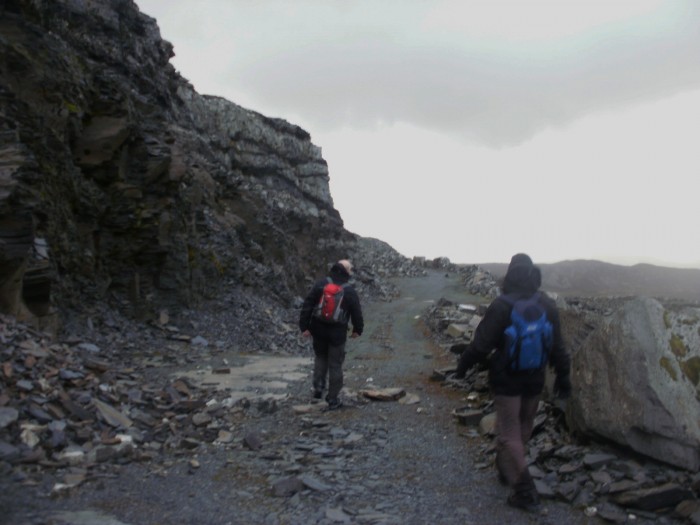 a scene form the Movie "the road" 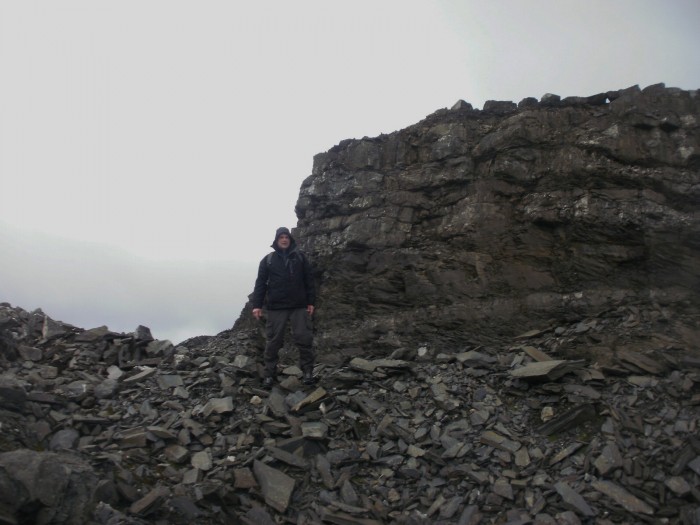 Another Scene from the movie "the road" 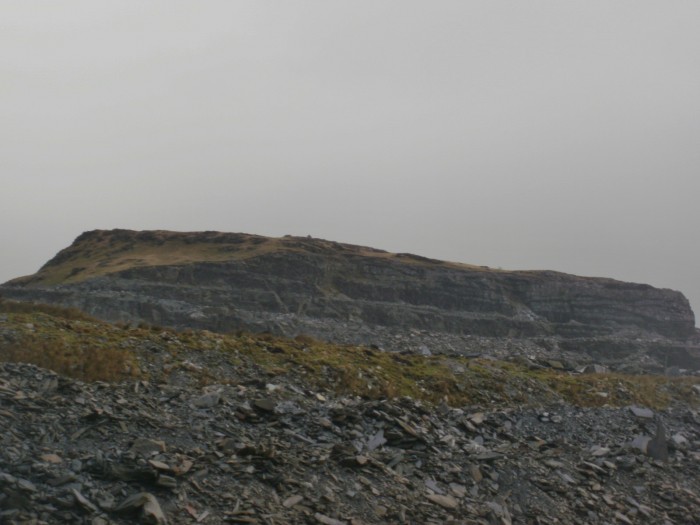 the damage done to Manod Mawrs N Top by quarrying.

not many more pictures of the climb up Manod Mawr as the weather came in and we got pelted with 70mpg hail and rain so there was no time for whipping out the camera to take in the scenery.
I did snap a few on the way out. 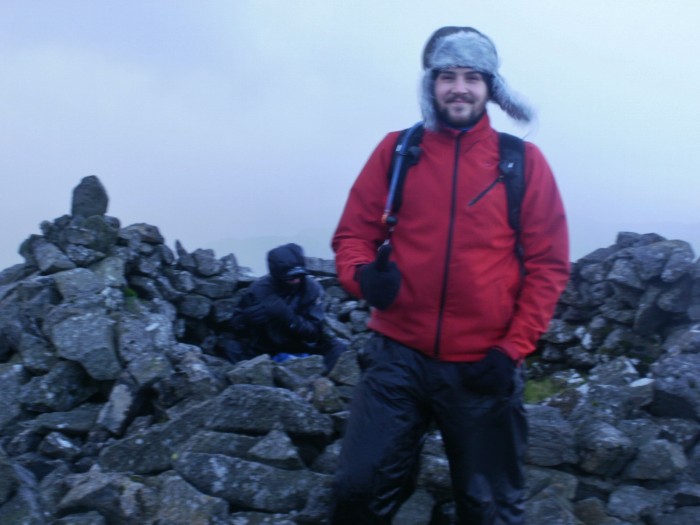 Me on Manod Mawr with Adrian Hiding in the shelter 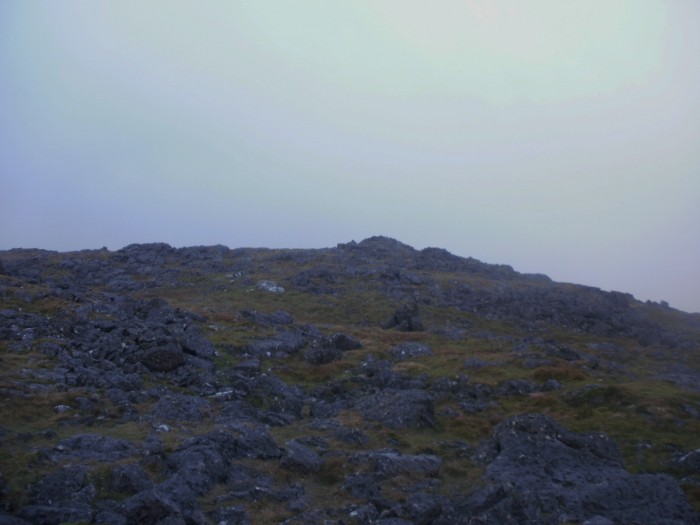 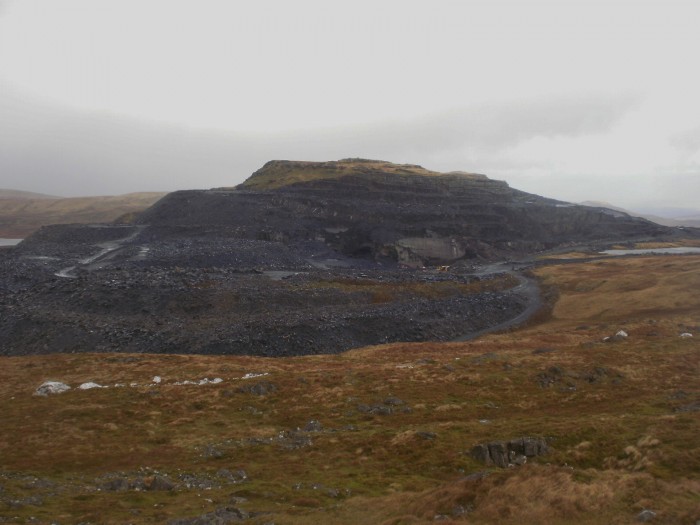 the walk down turned dry again and we thought we'd use the inclines again for a quick descent to blaenau. 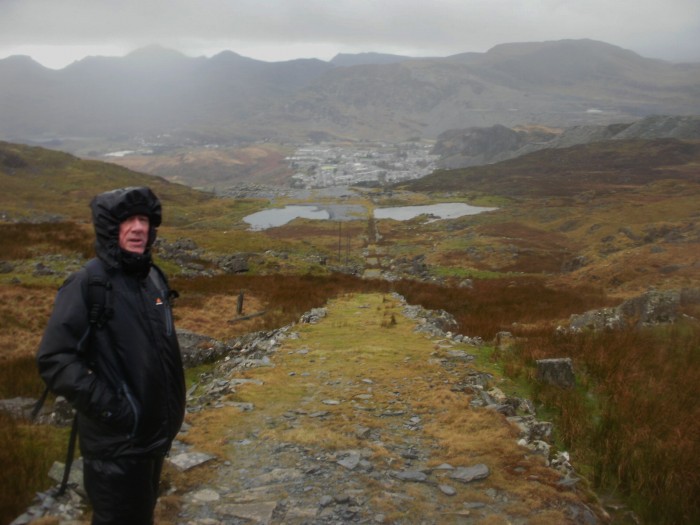 The Inclines leading back to Blaenau

zoomed in pic of the moelwyns 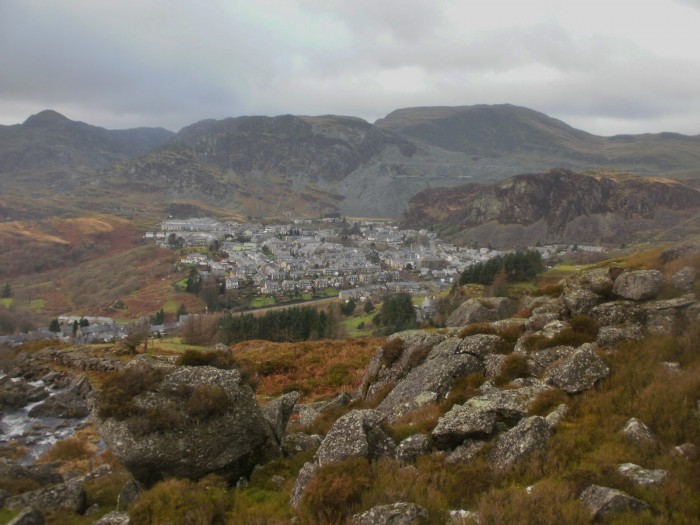 a strange walk really with lorries passing us at 2000ft and the wind and the grey it was just another couple ticks really.
good stretch of the legs and good to visit blaenau for the first time

A grim area in grim weather, only done these twice, once camping near to the summit of one of them...good views up high though.

Thanks for this, I haven't done these yet and was wondering how on earth people broke through all the quarry workings.

Hopefully will get there on a brighter day.

You will find the Moelwyns are much more fun

I think I might be on my own, but I really rather liked Manod Mawr... a nice rocky top with some good views (perhaps not when you climbed it, Mackenzie...!). The unworked north-west slope (cutting away from the inclines near the top) is probably a better approach/descent than that via the North Top quarry.

Good effort to get up anything at the moment, though! - it's months since I found a day with weather worth leaving the Midlands for..

Totally different from what I'm used to seeing reports

Enjoy your trip- a month off work? Jammy git!

poppiesrara wrote:Good effort to get up anything at the moment, though! - it's months since I found a day with weather worth leaving the Midlands for..

jammy yes and no.
I had to work 11 months straight to get there.
our hotel shuts 1 month a year and staff have to take holidays in jan.
it's nice having the long time off but you need it!!

Then you've clearly earned it!

Have fun in Canada - and hope to see some tales of the great outdoors when you get back.

, very interesting stuff even with the devastation in some parts - despite this I find there's still something hugely compelling about the area.

I visited just the once, years ago when my daughter was 1, and vowed to return sometime to get on the hills and explore the old workings. A great reminder for me so it's on my list!

Our trip was in the first week of the 'season', we did try to get up Snowdon by train but it could only go halfway because of the wind. And it rained nearly all week. Sound familiar?

I've been in Canada since Sunday and it's not rained a drop.
my wife (who's Scottish) can't believe it.