Well it's been way too long since I last posted a trip report - I've nearly forgotten how it's done. Since moving back home to Tennessee at the end of November, Stretch has been one busy man. I've only managed two hikes since I arrived back here - this is a report of the latest which I did on a perfect Sunday. The last 2 1/2 months I've been working my tail off to try and wrap up my PhD thesis - really want to finish some time in May if possible. Needless to say, this has hindered my ability to hike in the surrounding mountains and fish on the lake here in my hometown. After a week of writer's block, I needed to get away from the books, so I planned a hike up to Mt Cammerer in the Smoky Mountain National Park.

Mt Cammerer sits along the Appalachian Trail which borders North Carolina and Tennessee. I have hiked up to the "AT" at several points in the park, but this would be a new section for me. There is a fine lookout tower placed on a rocky outcrop at the summit and it offers fantastic 360 degree views. The tower was built in the late-1930s and restored in the 80s. It was used as a fire tower until the 60s and observers also kept an eye out for possible moonshining activity in the area. On a clear day one can see all the way to the hills around the Kentucky/Virginia/Tennessee border to the north and well across into North Carolina to the east, southeast, and due south. To the west you get a fine view of Camel Hump Mountain on the Tennessee side of the AT.

The walk begins at the Cosby Campground just inside the Smoky Mountain National Park - this is about an hour from my house which is to the north. It is possible to make a 16 mile loop out of this walk, but having not hiked much I chose to do an up and down route of just over 10 miles. I set off along the Low Gap trail around 8:30 and enjoyed a nice steady ascent through a section of thick forest which follows a stream. After 2.9 miles I reached the Appalachian Trail. My legs were feeling it a bit after the first hour and a half, so I took a quick break. I had only passed 2 walkers who were descending at this point - I wouldn't see another person until halfway back to the parking area. From the junction at the AT it is a fairly easy (more level) 2.1 miles to a short section of trail that takes you to the lookout tower. I guess one of the biggest differences between walking in Scotland and walking in the Smokys is the lack of views at higher elevations. With trees covering the entire area you only get fleeting views of the surrounding mountains until you come to what we call 'balds' along the top of the various ridges and along the AT. Despite the lack of views through the trees, the views from these clearings are usually spectacular.

After about 2 1/2 hours of steady walking I reached the tower. I probably spent nearly an hour just walking around taking in the 360 degree views. Some days it can be pretty hazy in the Smokys, but for the most part, it was a crystal clear day. I must have repeated the statement, 'there's no place like home', about 20 times. I was dealing with a lot of anxiety during my last year in St Andrews and thankfully that has cleared up since I've moved back. But for about an hour, I didn't even think about my PhD or any other problems I have. It's certainly always good to head outdoors and recharge the soul when things are looking bleak!

Hopefully I'll be able to head up some more local trails in the Smokys and post a few reports this spring. A lot of folks around this area try to walk all 800 miles of trails that lie within the park's borders. There is a bit of munro-bagging mentality in this lol. Don't think I'm not keeping record of which trails I've done!

Hope everyone back in the UK is doing well - I miss the hillwalking! 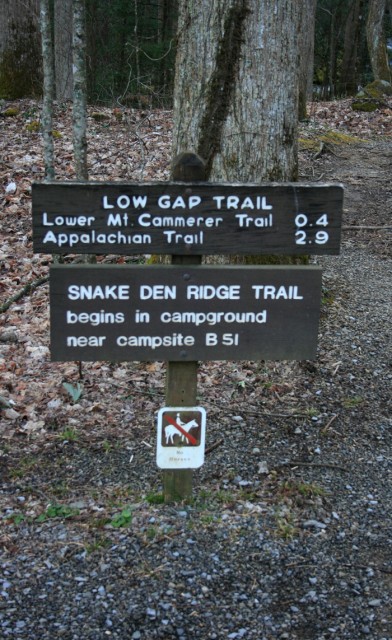 Some nice scenery to begin the day Start of the walk along the Appalachian Trail My target finally comes into view - left hump on the ridge Typical section of the Appalachian Trail Just a short way up to the tower from the AT Nearly to the top 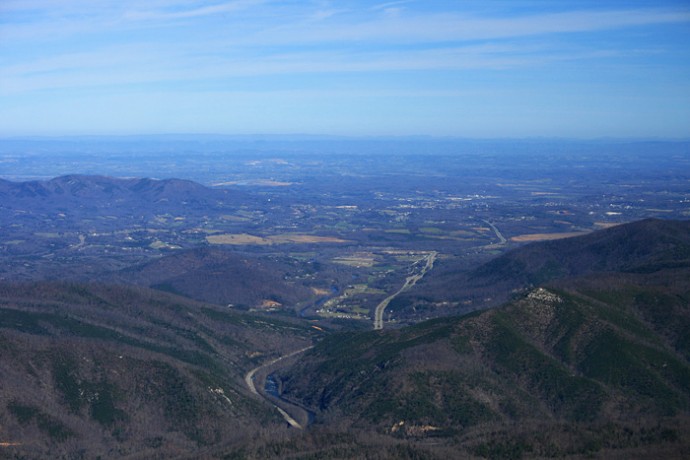 North along Interstate 40 toward - Newport, TN Good stuff Andy. Not managed any proper long hikes since moving here, just short trails here and there. Some good views there - sometimes hard to get, if it's not trees blocking them I often find a thick haze gets in the way!

Great report Stretch with some lovely shots of the bare winter trees and that cracking fire lookout (wouldn't that make a fine residence), great to have you back and to get a glimpse of TN, I look forward to seeing more of it later in the year

Good luck with completion of the thesis, just remember sometimes leaving it alone for a few hours can be more productive rather than less

so beautiful environment, I want to travel very much! Hope everyone back in the UK is doing well - I miss the hillwalking!

Great report Stretch...stunning pictures and looks like and amazing walk!

. Any mention of the AT always has me thinking of Bill Bryson's 'A Walk in the Woods'. He seems to have done a good job with his descriptions, as this looks exactly how I imagined it

I really like your last photo in particular. Something about all those different shades of blue.

A fine return to the site stretch certainly missed your reports.

Glad you're getting out & about.

You're weather was better than ours on the 11th

Cheers all, glad to contribute to the site again finally. The wildflowers will be blooming soon, so I'll try to get out again and take a few more shots.

Jonny, there are not dangerous bogs to submerge yourself in around here!

Good report. I've done a few sections of the AT up in Massachussets, and it reminds me of those - especially the walking below the treeline much of the time. Must post a report of my ascent of Mt. Washington some time. That was one of my best days on the hill.

Good too see another report from you mate