What a few days it has been weatherwise!! Fortunately on Sunday I managed to take advantage of it to head over to the Lakes, with my eldest to bag a few unclimbed Wainwrights in the Far Eastern Fells. We parked up at Martindale old church and headed South alongside the intake walls above the perfectly flat valley of Howgrain Gill. The weather was good and confidence high, so high in fact that we ambled blindly along, a short distance behind another walker who was doing a similar route. It was only when he doubled back and met us that we realised we had both made mistakes and missed the path that would take us over Brownthwaite Crag. We decided it was time for the first bit of graft of the day so headed up the steep fellside for a short distance until we reached a col before climbing up and over the crag. There was an upside to this error as we got to see the small cave that's marked on the O.S. map.
Once over the crag our next target was the ruined building at the top of Fusedale. As I wanted to include Wether hill on the trip we slogged straight up the fellside until we reached it's uninteresting summit and High Street, the Roman Road that crosses it on it's way to Brougham from Ambleside. In fact our route South followed the "road" across terrain more akin to the Howgills than the lakes. From here the near distance views opened up with High raise and Rampsgill Head directly in front and Beda fell to our right. Unfortunately the haze meant that even the nearby Helvellyn range was hardly visible but couldn't really complain as it's not often you can walk the high ground in March in a tee shirt. There is little of interest on the ridge itself except for a small sheet of water that is no more than a pond but has the name of Redcrag Tarn. The views to the Head of Rampsgill, Rest Dodd and the Nab are impressive enough to offset the left, right, left, right, route march. After two and a half miles It's "squad Halt" as High Raise is reached which was a great point to stop and have our snacking. Unfortunately the flys seemed to take a liking to the summit aswell so we moved further down to finish.
Kidsty Pike was our next objective and it was an easy ten minute stroll to what would appear to be a modest little summit to those unfamiliar with the area. It's only on reaching the summit rocks that true drama of the pike reveals itself as it is perched atop the great gulf of Riggindale beck backed by the bulk of High Street and it's eastern ridge. We sat a while to take in the scene ahead but when it became a bit busier we moved on to another easily attained WW of Rampsgill head. The view down the valley from it's northern edge is as impressive as any in the lakes.
On descending to the narrows of the straits of Riggindale we had reached the point to head back North on a well worn path towards Angle Tarn two miles away. This we did with a diversion via The Knott and past Satura crag to end up at what must be one of, if not the most attractive high tarn in the Lakes. Last time I was here I'd only seen it in the mist but now seeing it on a sunny afternoon overlooked by Angletarn Pikes was a spectacular sight. Had I passed this way first I wondered how tempted I'd have been just to sit there for the day and given the summits a miss. Time was pressing, however, and with four miles still to do we forced ourselves away and made our way to Boardale hause on a path which clung to the edge of the fellside and gave great views down to the patterdale valley and Brotherswater a thousand feet below. At the Hause we found ourselves on the path back to Martindale which cut across the ridge from Angletarn Pikes to Beda Fell. I wanted to include Beda Fell in the walk but Ollie was flagging so after pointing him in the right direction for the car I headed across the mile long ridge to it's summit at Beda Head and it's stunning views back to parts of the route we'd done, Place Fell, Hallin Fell and Ullswater. A fitting end to a great day out that proves once again walking the lakes isn't just about conquering the highest hills. The pond of Redcrag Tarn 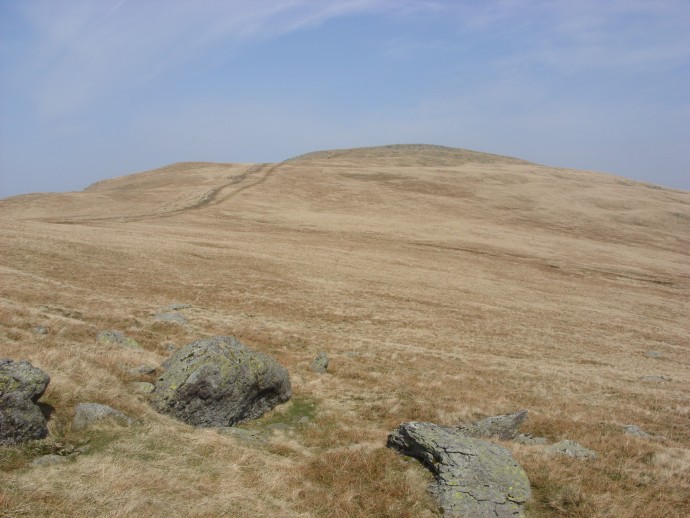 High Raise from the South The North Ridge of Beda Fell with Martindale, Hallin Fell and Ullwater.

An excellent walk, enjoyed reading your report and great photos

My Dad was always doing things like this, missing the correct path and just heading up the steepest part. I can remember us doing this on Robinson and Steel Fell in particular

Did four of those back in October (when we had some more unseasonably warm weather) as part of a Rigginadale round of sorts. Main reason was to go up the tremendous Long Stile ridge again

The return via Kidsty Hows isn't bad either.
Your right about the view from Kidsty Pike. It may look like barely a lump on the ridge from some angles but the view is awesome. Angle Tarn certainly had a soporific effect on visitors. On a nice day it's really tough to move on. Nice report Col, keep posting.

johnkaysleftleg wrote:Did four of those back in October (when we had some more unseasonably warm weather) as part of a Rigginadale round of sorts. Main reason was to go up the tremendous Long Stile ridge again

The return via Kidsty Hows isn't bad either.
Your right about the view from Kidsty Pike. It may look like barely a lump on the ridge from some angles but the view is awesome.

Angle Tarn certainly had a soporific effect on visitors. On a nice day it's really tough to move on. Nice report Col, keep posting.

I was thinking of adding High Street onto the walk but decided against it was just adding unneccesary mileage especially as I'd done it several times. I agree Long Stile is a great way to get to High St.

This walk, in reverse, was the last ever fell walk that your uncle Jack did; he was accompanied by Ian and myself.
It is a good walk.

pgrizz wrote:This walk, in reverse, was the last ever fell walk that your uncle Jack did; he was accompanied by Ian and myself.
It is a good walk.

One of the good thing of this round was the wide variety of views seen.

Great stuff Colgregg, lovely photos. I had a bit of the direct ascent myself today....I guess the upside is you get their faster

Nice report and photos CG. You are right about Kidsty Pike, it is not appreciated until you are at the summit

A good round that one, Col.

Martindale is one of my favourite valleys, a beautiful place to start and finish a walk.

Martindale is one of my favourite valleys, a beautiful place to start and finish a walk.

One aspect I liked was the views down several different valleys in one walk, all of them spectacular when viewd from high above the valley head.

Great report Col....looks like a really nice round trip and one to remember for the future!