A different side to Majorca - the Alfabia Ridge

A different side to Majorca - the Alfabia Ridge


So, end of March, a week off and a bit of spare cash...toyed with the idea of doing the West Highland Way but in the end the thought of freezing miserable wet days and even more freezing miserable wet nights (yeah, I KNOW that now!!!!) led us to the altogether more agreeable decision to fly off somewhere cheap and cheerful where decent walking could also be done. We opted for that old scots favourite, Majorca, amusing ourselves no end by conjouring up all the cliches of high rise hotel horrors, egg and chips and Red Lion pubs everywhere. But a wee bit of research goes a long way and we discovered that just 30 mins from Palma lies the town of Soller and Port Soller, situated in a low valley at the foot of the Serra Tramuntana, a spectacular long ridge of mountains to the north west of the island that now has world heritage status. Its a haven for walkers, road and mountain bikers, nature lovers etc and in the spring the Soller valley stretching down to the bustling little Port is lush with green fields, spring flowers and orange and lemon groves as far as the eye can see.

We walked every day, temperatures were perfect in the low to mid 20's. Generally speaking we found that walking routes are not well signed with the exception of an official long distance trail, much like the West Highland Way. We used the Charles Davis Walk Mallorca! guide and found it to be well intentioned with a lot of detail but confusing to follow with some inaccuracies that on ocacasion resulted in frustration and unecessary detours. Our lack of confidence in the Guide was putting us off trying the most challenging route, the Alfabia Ridge, an intimidating range that dominates the Soller valley from every angle, but as we sat every night on our balcony staring at it - just there, mocking us - we realised we would have to just go for it. 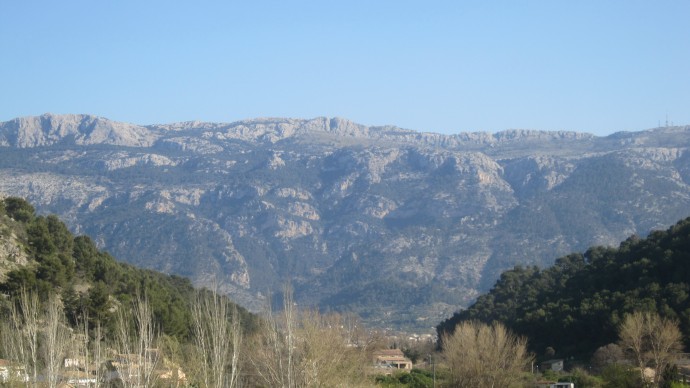 The view of the Alfabia ridge from our balcony, note the tiny speck that is a cluster of radio masts on the far right

We set off at 08.30 whilst it was still very cool for what turned out to be a two hour unrelenting hike up a rough cobbled trail that eventually faded away leaving a vague route marked only with tiny cairns, first up and over series of steep olive terraces, then into rough woodland overgrown with pampas grass and littered with dead tree trunks and eventually a climb up a number of steep limestone slopes. The cobbled trail at the start of the walk The path becomes overgrown and fades We emerged from the woodland under a series of crags which we skirted to the right of, bringing into view the radio masts and our first views of the actual ridge. The ridge is still high above stretching away to the north

Remarkably and despite the lack of an actual path for most of the route so far we were pretty much on target according to the guide - because this route description used the natural landscape for its waypoints rather than man made things like roadsigns etc we found it much easier to follow. At around the three hour point we reached a narrow plateau at an abandoned farmhouse before traversing directly up a steep craggy slope to a small coll where, after a little scrambling we ascended the ridge itself. From here the Guide warned us not to turn left onto the ridge but to drop down around 30 metres on the other side where a very faint path marked with small cairns hugged the edge of the cliffs all the way to the trig point at 1169m, about a quarter of the way along the ridge. On the ridge with views back to Soller Scramble up to the trig point The rest of the Tramuntana range stretches to the north

From here on the traverse of the ridge was completely pathless, marked very ocassionally with tiny cairns guiding us over approx 4k of rough limestone boulders and deep potholes - serious ankle twisting territory but quite exhilerating. We were headed in the rough direction of Puig Major, the highest peak on the island but inaccessible due to its military use - although it looked more like a secret hideaway for a Bond villain to me... The final challenge at the end of the ridge was to come round the left of the last peak Sementer Gran, taking us pretty close to a rather scary 1000m drop... The radio masts are way back in the distance now

This marked the end of the ridge and we descended at first down a rough donkey trail and then joined the Es Barranc, a well used cobbled track leading down a deep gorge and a beautiful walk in itself, all the way back to Soller, a mere nine hours later. A very satisfying day which would easily be achievable to anyone holidaying on the island who fancied a day in the mountains, there are regular buses from Palma to Soller from early until about 9pm, or better still base yourself in soller or the Port area as we did and get the best of both worlds, sea, a nice beach, quiet non touristy resort and those amazing mountains and coastal cliff edge walks! Definately planning a return visit! descending via the Es Barranc

Absolutely brilliant stuff! I love Soller and Port de Soller. Took the rickety little train up from Palma to Soller and stopping at the viewing point (to allow the returning train to pass) with the mountains all round. Would love to get up on them like you did but, sadly, it is still an unfulfilled dream.

What a great report, really shows the diversity of that beautiful island - I went there in my teens (as many of us did) but back then walking wasn't really on my mind

this was a really unexpected eye opener, very enjoyable

Superb Report and a side to the Island I knew nowt about. Really enjoyed this!!

We always used to walk from the northern end, staying at Cala San Vicente.

Thank you, we also did 5 other walks in the area ranging from 3-6 hours in length, the most difficult but spectacular of these being a coastal route from the little town of Deia back to Port Soller along a very rough cliff top path...well, I say path...

If anyone is planning to go there I wouldnt bother with the Walk Mallorca!book, there are local walking guide books and maps available in the shops for around 8 euro.

thought the report great , can`t wait to get back to the island , like to the route from Arta to Lluc , so many walks so little time

Thanks, for sharing your experience, beautiful pictures of the islands.

Great report and its good to see a route as I have been thinking about heading to Majorca (was there as a teenager) for some walking and hills as well as relaxation - do you have a good source for walks/routes?

Great Route this one, Daniel and I did this on a recent trip to Majorca, the route was full of interest on the way up through the terraces, the ridge (we didn't drop down the other side) was a lovely grade 1/2 scramble on grippy limestone and the descent through the gorge was spectacular!

One of the local guides warned us off saying it was an 11 hour route and not for children...I think it took us a shade over 6 and it ranks amongst our top 10 hill days...but wow was it hot!!!

I,d wait and buy a guidebook once there, or go for the cicerone book by Paddy Dillon. Smudger we have been back to Majorca since for more walking, totally fallen in love with it, going again in March and will redo the Alfabia ridge, the scrambling sounds good, we are more experienced now so that's defo on the cards!!!