We arrived at Nantlle in bright sunshine for what promised to be another great day in the hills. 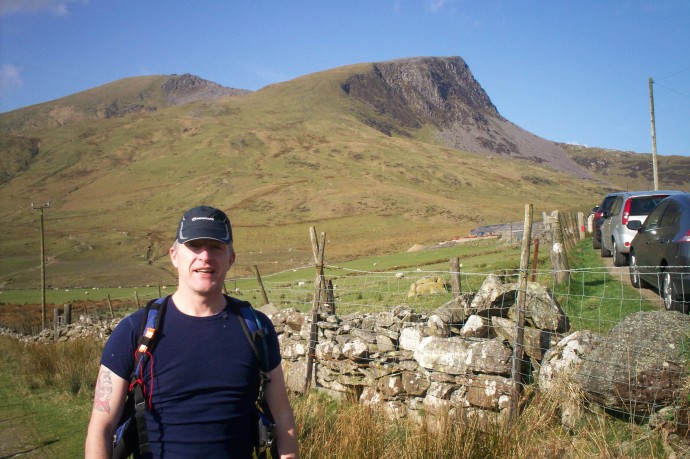 At the start with Y Garn to the rear

Moments after this photo the curse of the glass ankle struck; I turned my left ankle onwhat looked like a pea-sized stone and dropped to the ground thinking the day was over before it had begun. But after the initial pain subsided I tried walking on it and found it wasn't too bad and so we headed off fot the first pea of the day; Y Garn.

Unlike it's namesake at the head of the Ogwen valley this Y Garn doesn't reach the 3000' mark, in fact it is only 633m, so a nice and easy start to the walk up a well defined path.

This initial descent became even more enjoyable when I noticed that Neil was starting to lag behind. Now this almost never happens (in this case it was probably due to the fact that he was up until the small hours polishing off a bottle of whiskey), so being a good friend I slowed down to wait for him.

Like hell I did! It was foot to the floor to open up as big a gap as possible to revel in my alpha dog status for the day. As I steamed up the hill I caught up with a couple who were moving at a more sensible pace. We swapped pleasantries and the following;

Lady: Your blowing a bit.
Me: Well, my mate is a bit slow today so I'm just trying to make him suffer.
Lady: That's a bit mean isn't it.
Me: No, we always do it - if we spot a weakness in the other we try to exploit it. It's not that we're competitive or anything
Lady: (look of incredulity)
Me: Got to go he's starting to catch up

So I pressed on the the summit, not looking back in case Neil thought I was getting tired and took heart from this.

I reached the top and tried to look as relaxed as possible taking photos of the views when Neil arrived. From summit of Y Garn towards Snowdon

The panorama from here is great (my cheap camera doesn't do it justice) to the south Moel Hebog dominates the skyline above Beddgelert. Then anti=clockwise (R-L in my photo) the shark-fin profile of Yr Aran, Y Lliwedd pops up above the SE ridge of Snowdon then Snowdon summit and Crib-y-Ddysgyl. To the naked eye it is possible to see passed Snowdon to the Glyderau and the Carneddau beyond. Continue round to Moel Eilio and Mynydd Mawr before looking SW along the Nantlle ridge. 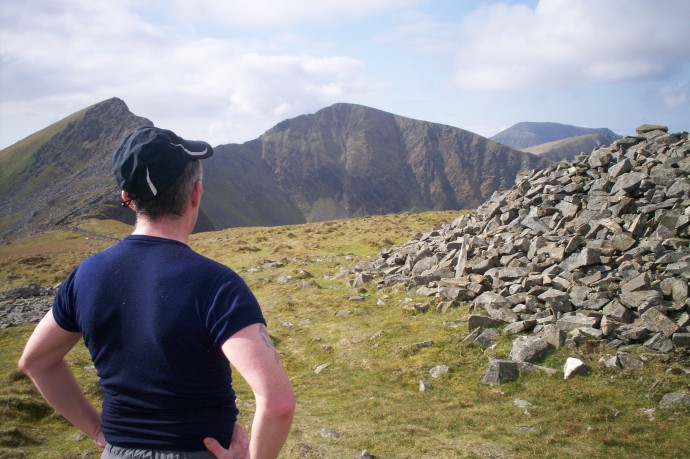 The next section of the ridge involves an easy scramble up Clogwyn Marchnad then a gentle climb to Mynydd Drws-y-Coed, both peaks flanked by impressive looking cliffs. 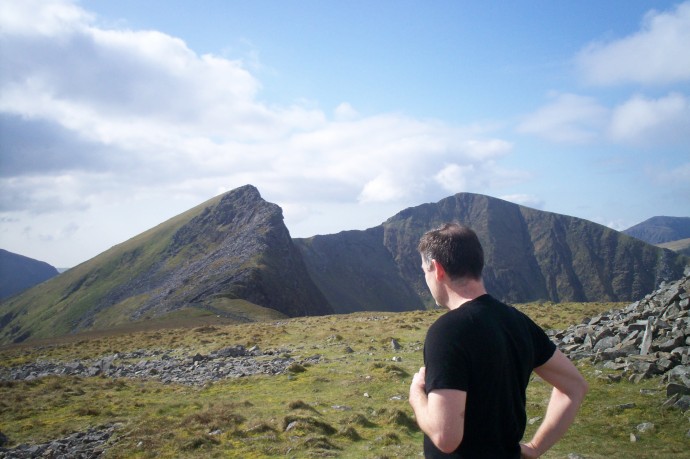 Neil looking along the ridge

After a quick snack we headed off up the scramble to Clogwyn Marchnad; this would be very interesting in snow and ice. 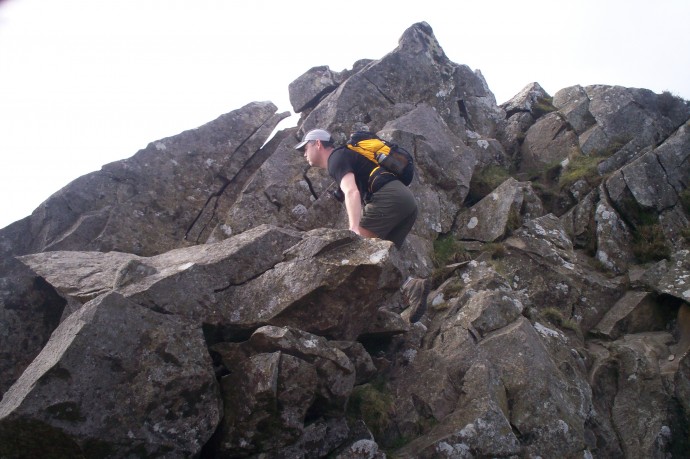 The well worn path along the ridge forks soon after this offering a by-pass along the ridge without visiting the summit of Mynydd Drws-y-Coed. Whilst the summit itself is something of a grassy plateau it is possible to get right to the edge of the cliffs and the views like those on Y Garn are extensive. Mynydd Drws-y-Coed with Y Garn to the rear

The route continues down a gentle grassy incline that becomes a touch steeper to reach the bwlch just before Mynydd Tal-y-Mignedd. A short climb brings you to an impressively large cairn at the summit of Mynydd Tal-y-Mignedd, which I couldn't resist climbing. Word to the wise - don't try this as the stones are not cemented in place and as I reached for the top stone to pull myself up it started to slide off. This would be a painful fall to say the least. Anyway here is a photo of me on top of said cairn. The path again takes a gentle line downhill following a fence before becoming a lot steeper to reach the bwlch before Craig Pennant. The climb that follows winds its way up through the rocks allowing those who wish to venture off the track for some very easy scrambling.

There is a cairn at either end of the plateau summit and when we stopped for lunch at this point we first got to feel the chill in the air, so on with the long sleeved tops (this shorts and t-shirts weather had to end sooner or later). Although there were now a few more clouds in the sky the views were still good and I could see the plume of steam from the train nearing Snowdon summit. 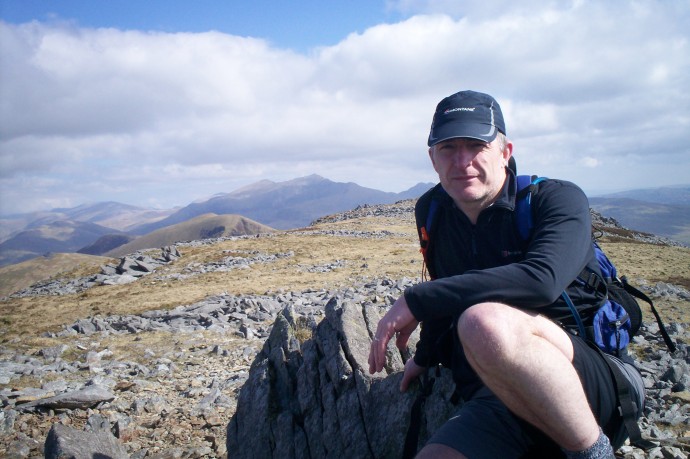 Craig Pennant with Snowdon in the distance to the rear

A gentle downhill across a couple of small boulder fields took us towards the penultimate peak of the route Garnedd Goch. Neil on the way to Garnedd Goch

There is a wall that passes the summit to the south, but this heads across uneven ground (more on that later); however there is a grassy path that skirts round the northern side.

Before the final summit of the ridge you must now lose about 150m in height; follow the wall down hill until you meet a join in the wall. Immediately after this head through a gap in the wall and follow a feint path south, then west to reach the rocky summit of Mynydd Graig Goch (the actual summit being the most northerly outcrop near the wall). 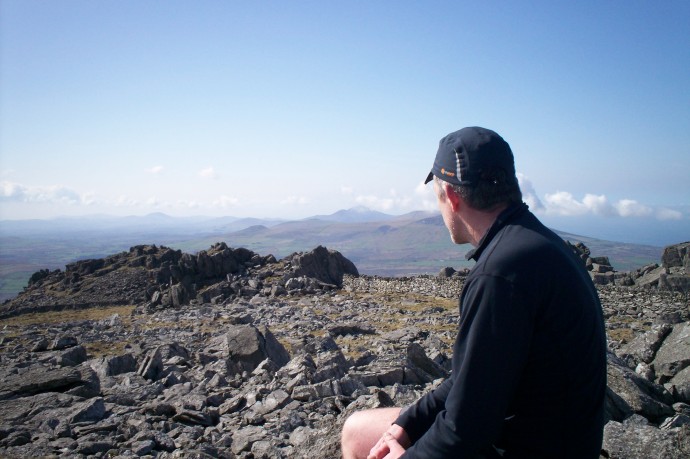 It had taken us over 3 hours to get here (with a stop for lunch) and we didn't want to hang around too long. Just time for a couple of photos before we headed back the way we had come. Neil before we head back along the ridge

All went well at first and on the climb back towards Garnedd Goch I opened up a bit of a gap on Neil. On reaching the style at the top I noticed the option to follow the grassy path around the north of the summit, but for reasons that I cannot fathom I decided to follow the wall across the boulders, despite the fact that my ankle was still quite weak. I took a drink and looked back to see if I could see Neil then 'crunch' my left ankle went again, but this time I took a bigger fall and knew it was a lot worse. I lay on my belly swearing in an effort to reduce the pain (it's a scientific fact apparrently that swearing dulls pain) until I was roused by a cold wet patch spreading across my chest. This momentarily took the focus away from my ankle as I thought I might have impaled myself on something as I fell, but established I was just lying on the mouthpiece of my drinks reservoir.

I gingerly got to my feet and picked my way through the boulders, the pain was enough to tell me that I wasn't going to walk this off, and in fact I was going to have a torrid time getting back. Anything other than an absolutely flat foot plant was very painful and even a perfect foot plant wasn't comfortable) so getting through the boulders was slow going. Once I emeged I saw that Neil had got well ahead by following the grassy path - why hadn't I taken it - I might have avoided this injury. I had been planning to take my son camping to Scotland in the easter holidays - that now looked very doubtful

Anyway, the route back is the same as the route out so I won't describe it, save to say that every downhill was absolute murder on my ankle (have I got the sympathy vote yet?).

Back at the car for just after 4 pm, so only two and a half hours back; which would have been faster if it were not for the ankle (oops did I mention it again).

Excellent report and particularly liked the pics seeing as I did this walk a couple of years ago in the clag and saw nothing.
Had two cars though, so didn't have to walk back on my two good ankles! Oh, and I didn't climb up on the obelisk either!!

Surprised to hear the train was running on Snowdon. It didn't run at all the previous weekend during all that good weather, so no cafe either. Well, it didn't run on the Saturday. Need some confirmation about last Sunday as I was on the Carnedds and wouldn't have seen the smoke from there.

Great report, and cracking pics (cheap camera or not

) I love the discussion with the woman on the way up and that cairn pic...I bet it was as difficult initiating the reverse off the top without taking a large rock with you crashing to the floor

Great report and I love this route - alhtough not done it for some years!! Looks like you had a great day for it as well...just wondered whether the trickiest bit was climb up the cairn!!

Great day out. Not done the full traverse in over 15 years, but I was up on the eastern end of the ridge yesterday afternoon and evening with my dad. We may well have passed you on your way back (we stated up Y Garn at about 2:45pm)

Dave, unwaith eto taith cerdded o safon, diolch.
Once again a great day out made all the better that we both suffered:
1. Me having got too friendly with Mr Jameson's fine Irish whiskey the night befor and then your rediculous pace.
2. You because your ankle is sponsered by Pilkington Glass and your inability to walk in a straight line when sober.
The soulution my friend is for you to aquaint yourself with Mr Jameson's finest and look at the world through my eyes. Next time you may well suffer a dislocated fracture and merely laugh it off instead of the fraulein-like scream which accompanies most of our walks. 'Till next time .......N