No, not a sighting of the evergreen rock group in the mountains, but an acknowledgement that after my brief moment in the sun on the Nantlle ridge (where I was able to leave Neil in my wake) normal service was resumed today, which as usual meant spending almost the entire walk trying to keep up with him.

But anyway I'm getting ahead of myself - we arrived at the Pen y pass car park for 08.30 which was already almost full despite the fact that the pay and display charges are £10 for the whole day. Although there is the option of buying a ticket for £5 for up to four hours, you can't do much in that time can you - so we coughed up the full amount.

Heading up the well made path towards our first objective; Crib Goch the clear skies offered the first of an endless series of stunning views all day, with the summits glistening with a covering of snow and ice in the sun. 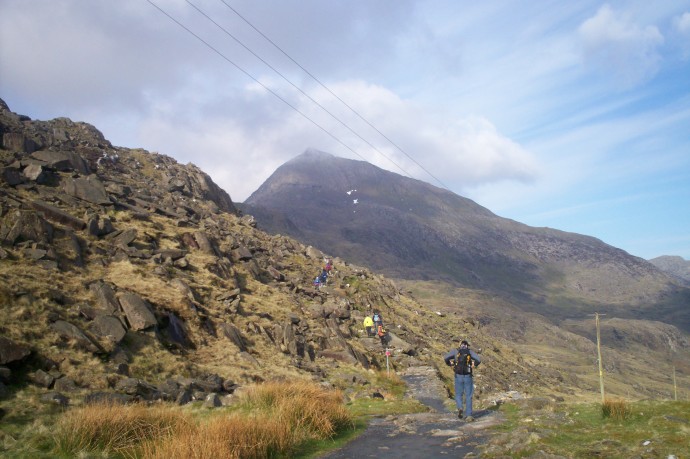 Setting out for Crib Goch

However, the summit felt like it was a long way off as I panted along after Neil up the well made path. I felt like I was wearing diving boots in my Scarpa SLs, whilst he scampered up in his inov8 400s.

"Where's the fire?"
"You're not in the army now"
"Stop and take a picture"
Fall off the edge"

On reaching the junction with the Miner's Track we follow the less clearly defined path that heads for Crib Goch. This quickly steepens up and allows the opportunity to choose any number of lines for a spot of easy scrambling to warm up for what's to come.

We passed a few group on the way up as Neil kept his foot down and by the time we reached the summit I was dead beat but trying not to show it). We rested to take on some fluid and water and soak up the views in every direction. Unfortunately my camera appears to have malfunctioned at this point as all the photos are either a touch camp or tend to suggest a bit of middle age spread (who said the camera never lies). looking acrss to Snowdon the top was already crowded with tiny figures like pictures of matchstick men crowded on to the trig point.

Refreshed we pressed on along the ridge, which those who have walked it will know, offers some attention grabbing exposure with clear views that go down, down to what would be a very painful stop far below. However, Neil and I didn't stop to admire the views as once again we unspeakingly were both drawn into the competition against each other and the clock (the weather forecast had suggested some possibility for rain in the afternoon so there was some smal justification for keeping a good pace up. Consequently we didn't explore the pinnacles and continued to the bwlch before the climb to Crib y Ddysgl. 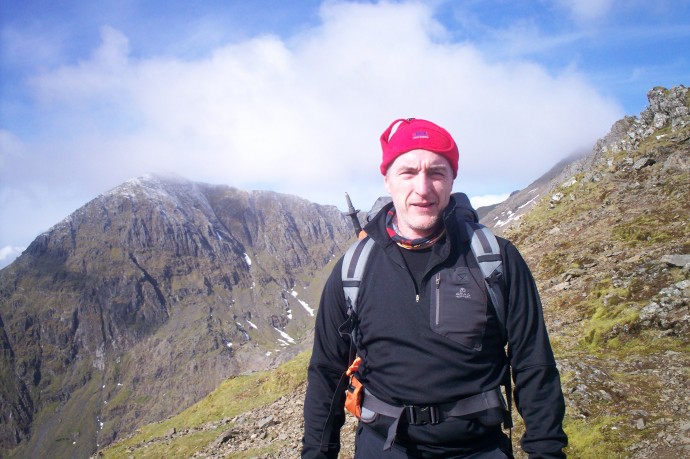 A fairly easy climb brings us to the trig point at one end of what i understand is the shortest trig to trig journey in the UK. It is a journey that in this direction Neil and I have done a number of times as part of the Welsh 1000m peaks race, which in that race signals mixed emotions - on the one had it is now mile 21 in a 22 mile race, but on the other hand there is a nasty little descent to follow on legs like jelly.

Anyway, back to the walk; we met a small group at the summit and they asked if it would be much quicker to return from Snowdon via the Miner's track than to continue the horseshoe. Neil confirmed that it would, but suggested that they should defer their decision until Snowdon where they could consider this over a pint of Guiness in the summit cafe. "I like what you're proposing" said one of the group and they headed off in eager anticipation of some liquid refreshment. 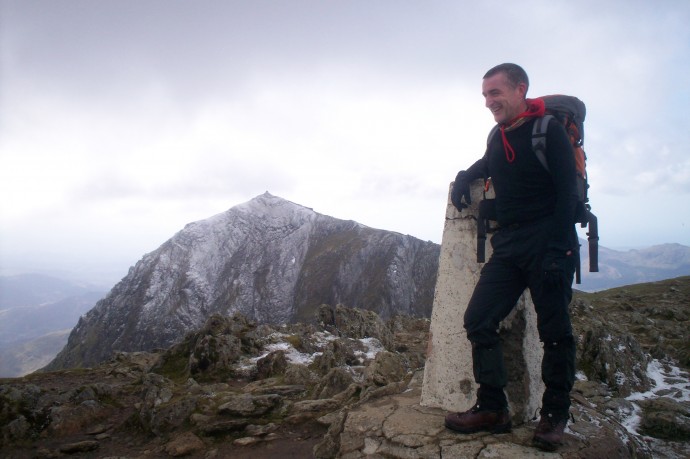 The quick descent to the finger post was quite different without the jelly legs and we broke into a jog at times, although I was still worries about my ankle (couldn't write a report without mentioning it). As I've mentioned the trip to Snowdon is quite short and in no time we were at a trig point again, and again the summit of Snowdon had been taken over by the masses. There was standing room only and not a lot of that) so we headed straight past to look for a spot to sit in the sun and eat our butties.

As we passed the cafe Neil underwent some mountain bike envy as there was a pack of MTBs against the outside wall (is that the right collective noun for a group of MTBs?). I asked Neil 'Which would you choose if you can have whatever you want" and he pointed to one that he informed me cost £5000. I'd be scared to ride a bike that cost that much - mine's a £40 cast off from my kid brother, but I ain't complaining.

After maybe 15 minutes we set off down the SE flank towards the bwlch that separates Snowdon from Y Lliwedd. This is a particularly steep and slippery section that I ofetn think might deter people from the otherwise fantastic Watking path route. Indeed, as we descended we were asked by a yound couple where the proper path is, but had to respond that there isn't a good path.

There is however a good path along the bwlch towards Y Lliwedd and we passed a number who were coming up the Watkin path route. Then we started the fairly short but rocky climb to Y Lliwedd and Neil was certainly not for letting up on the pace and kept pushing until we reached the east peak. 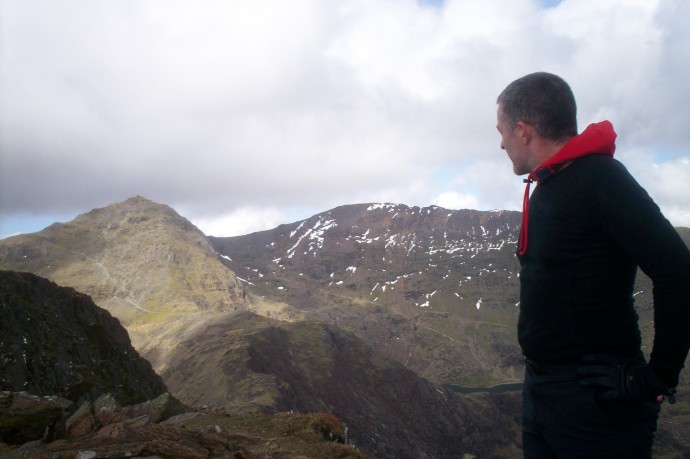 As we started to descent Neil said that it was 12.15 and it would be good if we cold get back to the car in under 4 hours, so where possible I broke into a bit of a jog (not easy in a pair of fairlt new SLs) until we hit the Miner's Track, which is almost a tarmac road. I was able to maintain a realy fast walk along here and we arrived back at the car for 12.38, and whilst there was some satisfaction is finishing in under 4 hours, we realised we could have bought the half day ticket

So all in all a great walk and a good work out.

P.S. After choosing the title for this walk I decided to drop in a few Status Quo singles - did you spot them/ There are 7 tracks (plus a single by a former UK eurovision winning group)

I really like this trip...been a while since I have been on this route..so thanks for taking me back!

couldn't get the euro song ROCK ON

Another good one Snowdonia7. That Neil sounds like a real fit so-and-so!

Munrogimp - yes he is quite fit, but I seem to remember a certain fell race in Crafnant in 2004 when I kicked hi **** (yes I know it was a long time ago, but I still dine out on it

...oh and thanks for this....whoaa whoaa were in the army now....thanks very much....all god-damn day now