Weather forecasts for the Snowdon area for Saturday 14th April were mixed yet contradictory: hill fog, 80% clear tops, snow showers, freezing above 600m.
This meant packing for every eventuality – crampons, ice axe and thick hairy vest.
On arriving at the already filling car park at Pen-y-Pass for 08:20 Dave and I hedged our bets on how long it would take us to get round the Snowdon Horseshoe.

our_route.gpx Open full screen  NB: Walkhighlands is not responsible for the accuracy of gpx files in users posts
We paid our £10, believing we’d be out for over 4 hours (£5 for less than 4 hour stay). I felt the urge to call the cops, I had been mugged!
The plan was to do the Horseshoe anti-clockwise. The view from the car park quickly told us there was no need for the snow kit and was I glad I had also brought my racing boots and not be silly enough to attempt Crib Goch in Scarpa SL boots? Dave and I fairly skipped up the prepared path that is the Pyg Track before veering right for the Crib. Steep climb from Pyg to scrable up Crib Goch

I can only think that Dave picked up a few fairly large stones in the treads of his SL boots as he soon slowed down during the scramble up to Crib Goch. Dave picking up stones in his SL's.

It has been years since I have done Crib Goch and if anything I am even worse now with any exposure. The old phrase ‘three bob bit, dust bin lid’ sprang to mind.
The conversation from Dave had dried up, unlike his forehead. I can only guess he was as focused on his foot placement as was I. As we ascended there were patches of snow and fingers of horizontal ice crystals to give the Met Office some credibility. The weather forecast was out by 20% by the time we arrived at Crib-y-Ddysgl in beautiful clear weather and a magnificent view of Snowdon dusted in snow. We passed another Father-Son bonding group at the trig point. They were easily impressed with my carefully composed photo of them at the trig point and Snowdon in the back ground over their left shoulders. From the way they talked they were as good as finished. Reality: There was still one heck of a climb to the very top of England and Wales highest point, then, back to the car.
Dave and I reminisced about the various fell/mountain races we’d competed in that take in Ddysgl and Snowden and how pleasurable it was to walk/jog it now with no pressure or pain. View from Crib-y-Ddysgl to Snowdon.

At the top of Snowdon the track-suit and jeans brigade were out in force with the wearers carrying their rations in Tesco carrier bags…oh for that snowy shower!
Dave managed to pull me away from some extremely sexy mountain bikes before I dribbled on any of them. I was to the MTB’s what Homer Simpson is to Duff beer. I touched a Lapierre Spicy 916, which at £5k a pop, challenged the wicking properties of my Marino underwear. 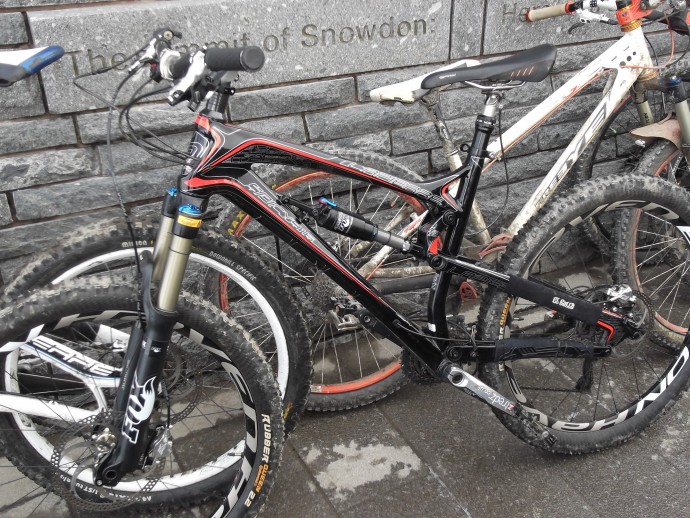 After snappin and a brew it was free-style scree running down the SE slope off Eryri towards Y Lliwedd and join the good section of the Watkin Path. I was not for letting Dave relax after the painful Nantlle Ridge route 2 weeks ago. Revenge was mine (q manic laugh!!!), I was feeling good and I let him know it.
Whilst not quite freezing, as Snowdon and Crib Goch were, when the wind hit you during the ascent of Y Lliwedd the chill factor was noticeable. Hat on; gloves on. Gloves off, hat off and repeat as required between exposure to the wind and shelter from the skyward pointing crags. The sun was doing its best to warm our bones but either way the views were so good I nearly forgot to take photos as I scanned the vistas of God’s own country.......... alas Dave got in the way. I’d like to write that we descended off Y Lliwedd like two nimble springbok but Dave obviously still had large stones in the tread of his Scarpas, which is a Health & Safety risk, and I am mostly blaming my bad back. Once on to the good prepared Miners Track Dave opened the pace with his march-or-die uberspeedwalking. This tactic, he knows, is too fast for me to walk yet too slow for me to jog. I have to resort to my John Inman (Are You Being Served) walk/run/mince to keep up. By the time we hit Pen y Pass again we were 2 minutes from saving ourselves £5: 3hours 58 minutes. However once again I cared not about the parking charge or the cost of fuel because days on the hills like today (when one has anticipated the worst of weather) are priceless. I just wished I hadn’t worn that thick winter vest!

Brilliant, I've just read the counter to this from S7 and forget to comment on the parking fee £10...

that's is plenty for a square of mucky land to stand still on for a while.

This comment "I have to resort to my John Inman (Are You Being Served) walk/run/mince to keep up" really had me laughing, I think it may be the best comment I've ever seen on this site, brilliant

snowdonia7 wrote:If you hadn't wore the thick winter vest what would have stopped the inflatable mattress you had stuffed down there from falling out (I thought you were going to photoshop the pictures of me that made me look flabby)

S7, inflatable mattresses, deployed airbags or burst sofas are something very new to me. Please advise how you have coped over the years with such conditions. Do you advocate homeopathetic medication or does the Gregg's loyalty card do the job OK?