Cold and confused on the Carneddau

Cold and confused on the Carneddau


The mountain weather forecast for Snowdonia area Sat 21st April was not a cheery one: heavy showers, cold and occasional blustery wind. Nothing unusual and nothing exciting so we’re still going to venture out. So I packed accordingly but minimally – light boots, spare hat and gloves, a warm top, ski goggles but certainly not crampons and ice axe.
The plan was for Roy and me to do part of the first section of the infamous Welsh 1000 race route from Abergwyngregyn to Foel Grach. That mountain race of 22 miles starts off at sea level, takes in the Carnedday and Glyder ranges before finishing on top of Snowdon. Oh! And the 5 miles walk afterwards to Llanberris, not for the faint hearted. We were then going to return back on ourselves slightly before turning east to Foel Fras, north to Llwytmor to take us back to the waterfall and the car.

our_route.gpx Open full screen  NB: Walkhighlands is not responsible for the accuracy of gpx files in users posts
The pretty little parking area (70 mtrs) at the start of this route was already busy by 10:30 am. We’d have got there earlier if Roy didn’t drive a 4.2 litre Toyota tank and drove so slowly to save fuel that I’m sure a Sinclair C5 passed us on the A55!?
Walking up the well prepared tourist track to the spectacular waterfall that makes Aber so popular the east shoulder of Bera Mawr could be seen shrouded in a shawl of thick grey cloud.Tthe mountainsides were full of lines of streams, rivers and brooks in spate. They showed up in vivid white against the beige/brown of those familiar heathers, moss and grasses that we would have to tramp through. After quickly gaining height across the scree field negotiating the rocky outcrop directly above the waterfall wasn’t so easy. It was slick with water, algae slime and polished by thousands of boots. I took an expletive inducing slip which not only made me consider my mortality but also rendered my left foot moist already.
We passed three blokes ambling along with no urgency in the world and bid them good morning before crossing Afon Rhaeadr Fawr to start the heather pulling steep climb to gain the ridge that leads to the tops of Bera Bach and Bera Mawr. The idea is to get directly between them. We were now in thick clag and waved the seascape views good bye. We spotted one or two blobs of snow clinging on which surprised us both but giving no indication as to what lay ahead. Me contemplating the view and my heart rate.

My navigation skills got us bob-on between the mounds and that was the last time! The going underfoot got rapidly more difficult with a thick slushy layer of snow. After me mocking Dave’s footwear selection last week
http://www.walkhighlands.co.uk/Forum/viewtopic.php?f=16&t=20334
I could not have got it any more wrong unless I’d worn flip-flops. My Inov8s were sodden from stepping into snow well over the boot height (yes I know……gaiters…. but I didn’t, did I?).
We bypassed Yr Aryg and pressed on for Garnedd Uchaf. I could now see the footprints of another pair of loons heading in the same direction. Their shadowy figures could be seen moving out from Garnedd Uchaf as we arrived. They had evidently stopped for a brew and we did likewise. By now the wind had picked up considerably so time for another layer. Poor old Roy was navigating by Braille now, his glasses steamed up as every snow drop landing on his Specsaver specials melted. I reassessed the map even though I knew it was a route directly south for 1K. Off we went but after a while it didn’t feel right. Another check of the compass (“trust the compass, use The Force Luke” a voice in my head shouted over the wind). Out came the GPS. The compass was now showing the correct route though we were not necessarily where we should have been. Confused I was.
By the time we neared Foel Grach the wind was blowing a gale and the snow was ‘nad deep, as my Nan says. The hail was stinging any exposed flesh like a thousand biting ants. Thankfully I recognised the well camouflaged bothy amongst the other rocks and drifting snow. In we piled breathless and visibly steaming in this sanctuary. The darkness was broken by the solitary window which was thankfully on the protected side of the hut. Big brews of coffee and big sausage and cheese butties made the world a better place. The Welsh 1000 race continues south-west from here to Carneddau Llywelyn and Dafydd but after half an hour recuperation it was kit back on and into the maelstrom. It is now I regret not taking any photos of the conditions if just to prove the massive difference between above and below cloud.
Again the route back was 1 km north to Garnedd Uchaf…..simples? No. After jogging down and following our own footsteps we reached one of the tops of Uchaf. Now I have been geographically mis-located before or over shot a route or track but what happened next is still a mystery to Roy and me. We analysed and pondered but how we came to be once again south of the 884 mtr height point, going BACK south towards Foel Grach we have no idea. We had somehow just done a 300 mtr complete 180 degree about-face! By now I was all for a) having myself sectioned b) booked onto the next navigation course c) stick my compass somewhere up Mr Silva to give ‘magnetic bearing’ a new meaning.
Roy came to the rescue when he fumbled for his 20 year old, “I had it in the boy scouts or was it a Christmas cracker?” compass. We compared the needles behaviour and my less-than-12-months-old-£25-Silva-Type 4/54 was less than satisfactory. The needle was every so often sticking, failing to rotate as I turned around instead of floating free. I’ll not claim it as my excuse for getting so mis-located but it is mitigation….isn't it? Being the positive chap that I am I saw these hill reps as good training and thus make me a better person. The situation was resolved and we returned to Uchaf. An executive decision was made to bin Foel Fras and Llwytmor because of the wasted time and pants weather plus I was getting cold- no big winter gloves either.
It was a no-brainer to continue north directly into the cwm that fed Afon Rhaeadr Fawr and the waterfall. It is a steep but safe route down the valley though at this altitude the state of the snow was slushy and making us look like we were being tazered as convulsing slips, trips and slides sent us tumbling.
In the valley bottom we were out of the snow and cloud. We could have been teleported to a different day such was the difference in conditions to that above the cloud.
We passed wild horses with big eyed foals nervous at our presence but they were more alarmed at our efforts to negotiate the boiling river and tributaries. 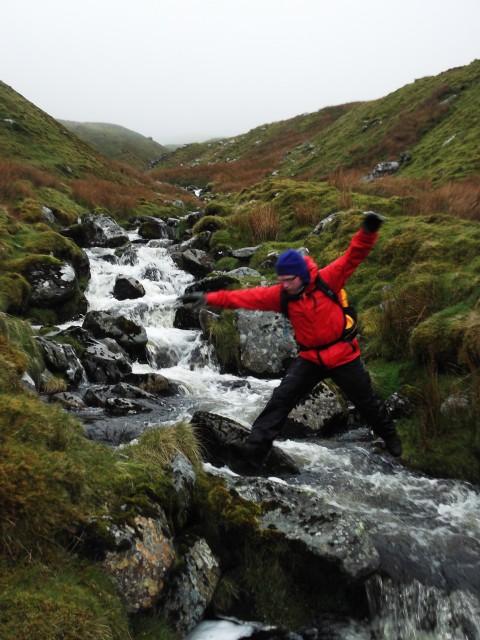 Just above the waterfall we bumped into the same three blokes we’d greeted on the way out. They were still clean and dry but they looked at us as if we had dropped from Uranus: soaking wet, muddy layers of clothing, hats, gloves and ski goggles (on top of head). “It’s a different world up there mate” I said pointing over my shoulder and walked off down the scree with a little strut in my step.
As ever a great day of calorie burning and lessons: check compass and carry a spare, take the kit, carry the kit but at all times keep smiling.

Brilliant report Munrogimp entertaining as always, interesting thing with the compass though a pain in the ass for you guys I'm sure

Although I'm sure every time I've been geographically displaced I seem to have been with you?????

Great report MG...at least you managed to maintain your sense of humour (aleays useful on Mountians I find!)....the thing with the complass is a bit weird tho!! I think I would be asking for a refund...assuming I could find where to take it back to!!