3 Crags and a Fell - Borrowdale

3 Crags and a Fell - Borrowdale


Not for us the breathless heights of 3000ft, nor even the paths to 2000ft of which there are many in Borrowdale. No, today was going to be an unashamed exercise in Wainwright bagging with Mick (he’s climbed a lot more than he realises!).
Leaving home around 0715 and arriving in Borrowdale about 0915 we parked in the Car Park by Great Wood but not before we’d driven past it and had to do a U-turn.

our_route.gpx Open full screen  NB: Walkhighlands is not responsible for the accuracy of gpx files in users posts
Walla Crag was the first objective of the day, a straight up and down, no pack and less than an hour. So it proved to be, although even without a pack, strange feeling, I still managed to overheat and have to remove a layer!
The good path heads for Cat Gill before ascending quite steeply up through woods to the shoulder of Walla Crag. We went past the first stile over the wall thinking it may lead us the wrong way?? The second stile was a few hundred yards further on and gave a clear view of the summit. The views from the top were good and the weather seemed to be promising although the layer went back on pdq. View to Borrowdale from Walla Crag Bleaberry Fell, done once, never again! till the next time round at least.

We said hello to the two couples we met on top and then headed back down via the first stile (it did lead to the top) to the car and a brew and butty.
Rosthwaite was the next stop.
Arrived quickly in Rosthwaite and made for the car park. I saw it was pay and display and went to the machine whilst Mick got his stuff out of the boot. £5.50 for four hours seemed like daylight robbery, as my expletives in rustic English proclaimed. However, the very nice man selling National Trust memberships pointed out (with some embarrassment) that the car park next door, just over the wall, belonging to the Borrowdale Institute only charged £3 and you put the money in a slot in the wall. I nearly ran Mick over in my haste to change car parks, but I confess we only had £2.89 in coin, so I owe them 11p! A quick brew and off down the path, past the Farm Shop and Café to the River Derwent and over the ‘new bridge’ 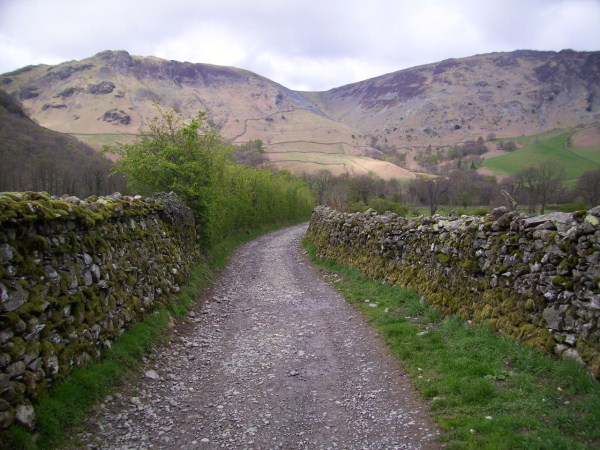 Path past the Farm Shop The path goes up the side of the wood

The path was great and a left turn thro’ a gate and up into the woods and eventually over a large ladder stile took us to the mine workings. The path up the slate mine

We admired the well constructed path zigzagging up the slate and on reaching the top were perplexed by the myriad of mini cairns. We decided it was probably a school trip project or ‘the little people’ trying to send a message, nevertheless it made us smile!
A short pull up to the top where we were confronted by the war memorial plaque on top and spent time reading it and some of the messages left. The views in all directions, the sun and silence made the summit an excellent place to sit, eat and completely relax. Derwentwater, Skiddaw and Blencathra on the right The peace lasted about ten minutes before a party of fifteen men and lads appeared, the leader looked the worse for wear and said they’d had a heavy night, you could tell!
Mick and I bailed off and apart from being delayed at the ladder stile by another party of ten or so going up, got back to Rosthwaite by about 1245. A very pleasant stroll up the lowest of the Wainwrights.
The final part of the plan was a trip round the opposite side of Borrowdale to collect Great Crag and Grange Fell.

our_route.gpx Open full screen  NB: Walkhighlands is not responsible for the accuracy of gpx files in users posts
Off we trotted down the path to Stonethwaite (Cumbria Way) passing two parties of heavily laden D of E award lasses (they never seem happy, but then their packs are usually twice their size! So it’s no wonder.) We speculated on all the stuff they’d been forced to carry by worried parents, just in case, but consoled ourselves that they were young and would probably cope a lot better than us.
We consulted the map and did a left just after the Stonethwaite Bridge, by the large sheepfold, the path is quite clear although not as clear or wide as the Cumbria Way track. About two hundred yards later you get to the woods and a stile, then begin to climb. Start of the path to Dock Tarn

The path improves as you climb and before long we were on a well constructed set of steps that took us up through the woodland and out onto the moors above, it felt like they went on forever, but in fact made a very steep climb quite bearable. The stairs to Dock Tarn

The initial objective of Dock Tarn soon came into view and we found a spot by the beach, there is a small one, sat down ate and watched the ducks gradually creep nearer in an attempt to get food (it failed!). Dock Tarn was a small victory in that we had managed to get there, having failed miserably in February 2010 on our way back from Ullscarf to Stonethwaite due to some wonky navigating culminating in a slide, roll, run and stumble down the fellside, missing that great set of steps by several hundred yards. This is Dock Tarn!

The map indicated that Great Crag was off to the left of the path which incidentally was heading for Watenlath, a bearing from the left horn of Dock Tarn took us straight to the summit and from there we had a clear view of the way to attack Grange Fell. The view from Great Crag, its raining on Great Gable We made our way down on to the path to Watenlath, saw where we had failed so badly on our last visit and set off in a direct line for the main Watenlath to Rosthwaite path in the distance. The way to Grange Fell

A sign informed us we were about to go on wetlands and keep to the path, which we did, but the wetlands weren’t very wet, a pleasant change, doubtless they will be now!
Once at the main path, quick bearing check and off up the path towards Brund Fell, which appears to be the summit/highest point. Grange Fell is a big sprawly thing with lots of little pimples and in mist would be an interesting challenge to hit the top. But we got there and did Jopplety How (great name!) just in case. Mick pointing to Jopplety How or maybe ther nearest pub!

We retraced our steps back to the main Watenlath path and headed back to the car admiring the views up Borrowdale to Great End and Scafell Pike as we did so. Views of the 'Big Ones' on the way down

Back at the car we had no sooner opened the boot to put the packs in when the heavens opened and it poured down. This only served to hasten our journey to the pub and eventually chips in Keswick. Another four ticked off.

Re: 3 Crags and a Fell - Borrowdale

What a fantastic day in the hills Dave, beautiful views abound and no rain (well not till the end anyway) £5.50 for 4 hours sounds a bit steep to me too, but £3.00 over the wall is fair enough. Your description "slide, roll, run and stumble down the fellside had me laughing out loud. Great report - really enjoyed it

Re: 3 Crags and a Fell - Borrowdale

Great report and some superb pictures.The clouds you saw over Great Gable were in fact trying to deposit a bit of snow but never really got going. We were just west of Great Gable climbing Pillar and most of the Mosedale round. It was windy over that way so you clearly had the better weather a little further north and east.