This board helps you to share your walking route experiences in England and Wales... or overseas.
Warning Please note that hillwalking when there is snow lying requires an ice-axe, crampons and the knowledge, experience and skill to use them correctly. Summer routes may not be viable or appropriate in winter. See winter information on our skills and safety pages for more information.
Post a reply
21 posts • Page 1 of 2 • 1, 2


Staying in Keswick for the week and the forecast for Wednesday was cold overnight but clear with early morning sun; perfect! Up at 5am, ready by 5.40 and this was some sort of minor miracle

Equipment ready to hand; coat, hat, scarf and gloves (just in case), walking boots on, camera and, of course, the walking sticks. Those sticks have been my constant companions for over six years and, without them, I wouldn’t get very far

However, this isn’t a wake for those lost walking years but, more a celebration of what I can do now mixed with reflecting on lots of happy memories.

I first drove to Derwentwater and stopped by Barrow Bay. Here I got out of the car and took a photo of Catbells (seen side on) as it was reflected in the lake. Catbells and Maiden Moor were the very first Wainwrights I walked, back in 1960 when I was 10 years old

Mum and Dad “discovered” the Lake District that year and, from thence on, they continued returning until ill health and age prevented them. Now, some of their ashes are scattered below Catbells.

In August 1960, we arrived at the foot of Catbells, having crossed Derwentwater by boat and, completely unprepared for walking; just wearing our normal summer clothes along with our sandals! But, we were totally hooked and for the next 10 years always camped 3 times a year; Easter, summer holidays and October half term (Mum was a teacher) whatever the weather, it didn’t matter, we were camping in the Lakes

Often near Ambleside or Grasmere, in Wasdale and Borrowdale. Later, it was B & Bs, youth hostelling and also, a timeshare week in Keswick bought in 1987

I next drove over Whinlatter to Lorton and then on to Crummock Water where, again, there were some wonderful reflections. We always seemed to ignore the walks by Crummock Water and headed for Buttermere and its attractions, including the circuit of the lake. The nearest we got to Crummock Water was starting off for Red Pike!
For many years I looked yearningly at the path going up to Scarth Gap, wanting to see what was over the other side; Ennerdale, for those who don’t know, and this opened up views to fells previously approached via Wasdale. Great Gable and Pillar included. From Scarth Gap you can also turn left onto Haystacks or right up to High Crag. 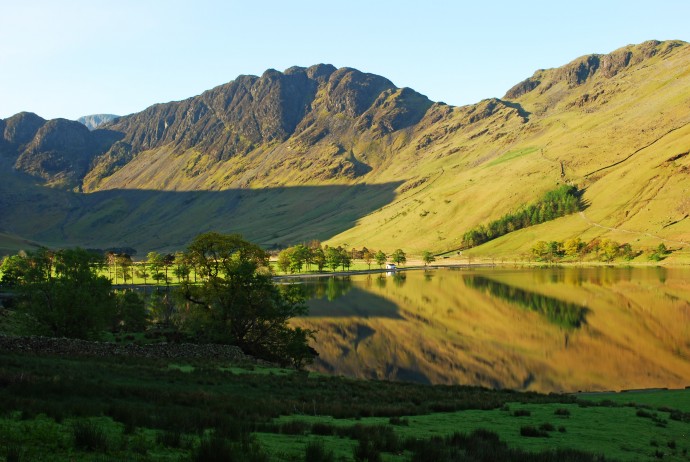 Haystacks on the left and Scarth Gap path to the right

Having spent ages taking photos at the end of Buttermere, carefully trying to position myself and not overbalance, I got back into the car headed up the Honister Pass and down into Borrowdale. The early morning sun shining on the fresh spring green of the trees made everything sparkle and I thought how wonderful to be in the Lakes! (Rain forecast for the next 2 days tho) Descending the Honister Pass, I thought of the time we walked up Robinson and across Buttermere Moss (yes, in our sandals) and had to hurry to catch the last bus back to Keswick

Dad and my brother had to run for the bus and ask the driver to make an unscheduled stop for Mum and me; thankfully the driver did! By the time we reached Seatoller, the bus was full; people standing in the aisle, double the number sitting on the seats and then, some were still turned away. How they got back to Keswick I don’t know but, oh those happy days!

Driving along Derwentwater I realised the light had changed but the reflections were still present so, this time, I stopped in the Kettlewell car park. I pottered along the lake shore trying to find the best place to take my photos. Another view of Catbells and I wondered just how many times did I actually walk up there? Lots, no doubt, and it was the last fell Mum was able to climb whilst Dad managed the terraces below Catbells for his last walk as well. Another time, back in 1988 just a month after moving to County Durham, Jeff, Julia, Nicola and I set off up Catbells, Maiden Moor and High Spy. We reached Dale Head and realised the light was beginning to fade (end of February) so, cut short doing the whole round and descended to the Newlands valley as quickly as possible before reaching the car in almost total darkness. No headtorches for us then Skiddaw was looking resplendent, reflected in the lake, along with some convenient white fluffy clouds, and so I took a few more photos. This was one of the few higher fells that I didn’t complete until Julia and Nicola were walking with us and I think I first went up there in 1990. However, I do remember it was a beautiful day and the views were fantastic, pity I wasn’t in to photography then!! Reluctantly, I then decided I’d seen and taken enough so it was time to return to have some breakfast and reflect on a brilliant 3 hours!!

More photos will be on my website very soon and, I hasten to add, nothing for sale so I'm not advertising

However, I am always grateful for any comments posted on the website, please?

Absolutely stunning....really captured the soul of the lakes!!

Quite magnificent pictures susie. It's a wonderfuly satisfying feeling when you get up before everybody else, capture images like that and return smugly for breakfast knowing what everybody has missed. Loverly report.

Gorgeous pictures and lovely to read your reminiscences as well. I especially love that very last picture. This is not Scotland, is it? Sorry, bit ignorant on where Scotland ends and England starts...

Thank you very much, Gary!

johnkaysleftleg wrote:Quite magnificent pictures susie. It's a wonderfuly satisfying feeling when you get up before everybody else, capture images like that and return smugly for breakfast knowing what everybody has missed. Loverly report.

It is John! I only saw 3 people for the first 2 hours

Lenore wrote:Gorgeous pictures and lovely to read your reminiscences as well. I especially love that very last picture. This is not Scotland, is it? Sorry, bit ignorant on where Scotland ends and England starts...

Thank you for your kind comments and no, its in The Lake District, England

RTC wrote:Agree. Gorgeous pictures. Lake District is in North West England about 30 miles South of Scottish border. It is a wonderful area.

Thanks for that and yes, where have those years gone?

Lovely Pics Susie. I was in Keswick camping at the weekend and only in the early hours of Sunday was there weather like this. Saturday was a decent day though with plenty sun in between the cloudy bits. Sunday was cloudy (but above the lower fells) and extremely windy It felt like February on top of High Raise (Central Fells). I spent the day anticipating a 60 mph rainstorm hitting me but it never came, much to my relief.

Absolutely beautiful Susie, stunning photos and even better memories of a wonderful part of the world

Thanks Colin. We arrived on Saturday afternoon and had sun all the way over

Sunday was a better day than forecast and Jeff went for a quick walk over Latrigg but, its been chilly for May

ChrisW wrote:Absolutely beautiful Susie, stunning photos and even better memories of a wonderful part of the world

Thanks Chris, sorry I didn't have snow to go with the sun to rival your photos

The colours in the photos were amazing and I dont know how you managed to capture so many perfect reflections on the water, skill perhaps

Hope you manage to submit a few more reports

I missed this report, the pictures are beautiful, certainly a talent you have. The one of Haystacks is wonderful

I need some tuition with my camera

Wonderfull report & pictures Susan,will need you to give me some lessons on how to take a picture.

morag1 wrote:The colours in the photos were amazing and I dont know how you managed to capture so many perfect reflections on the water, skill perhaps

Thank you, Morag. I just happened to be lucky with the reflections; they were on each of the lakes as I drove round and being out early certainly helped

L-Hiking wrote:I need some tuition with my camera

Thanks Geoff for your comments! You've taken some great photos with your new camera

But, we can still meet up for that coffee sometime

gammy leg walker wrote:Wonderfull report & pictures Susan,will need you to give me some lessons on how to take a picture.

Thank you Willie. Jeff and I are up on Loch Ard in a couple of weeks or Craignish in October so lessons then!!

Fantastic report Sue loving your pictures of the great landscape. You obviously have a love of the lake district and great memories from your childhood .After reading your report makes me want to visit this beautiful place.

davebhoygreen1968 wrote:Fantastic report Sue loving your pictures of the great landscape. You obviously have a love of the lake district and great memories from your childhood .After reading your report makes me want to visit this beautiful place.

Yes, you'll have to journey south one day. Have you still not got any smilies?