It had been a full weekend. The Company I work for had entered a team in the Wiggle Mountain Mayhem 2012 at Eastnor Castle. See www.wigglemountainmayhem.com It is a 24 hour mountain bike endurance ride and I had been up through the night as part of the pit crew, which basically meant a lot of eating and drinking! LOL. Having got back to my hotel at 9am and getting 4 or 5 hours sleep i needed some fresh air. From the ride site you could see British Camp which is a hill on the Malern Hill ridge. So I jumped in the car and headed back towards Malvern. British Camp is the hill on the left.

The road go's to the left of the the hill and opposite The Malvern Hills Hotel is a well situated car park. Its £3 to park with the money going to the conservation of the hills. Its a busy place and probably needs it. There are well constructed paths and steps which must be needed to stop erosion. BTW the Malvern Hills has lovely rooms, we use them for customers on training and has a very good restaurant. Or a nice outside terrace for a pint after a walk. Looking back down the hill towards the SSE I think. Great visibility and views. Apparently the first occupants built an Iron Age Fort, then it was used by other folk. The earth ramparts are massive and must have been an incredible task moving tons of earth. Google earth gives a good view of it. Then down to a wooded walk back. Came across this cave! Nice home for a Hermit.

From the cave I made my way back over the saddle and back down to the car. Great way to blow the cobwebs away from the weekend. If ever you are near Malvern, Worcester or Hereford and have a couple of hours to spare, check out the Malvern hills. Now I have tramped about the area a bit, the next visit will be to start from the most northerly hill and walk south on the ridge. 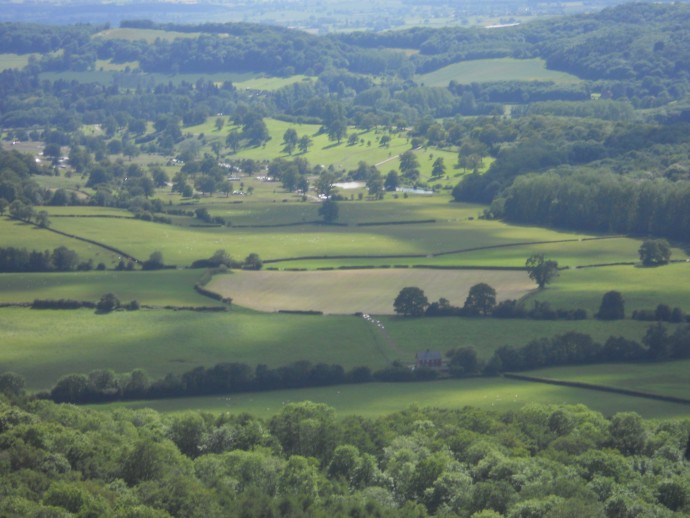 View down onto the Mountain Mayhem site although it was starting to clear by the afternoon. If you look hard, in a field in the middlle of the photo you can just see the track snaking up the hill to the right.

Nice report, fine set of hills, I must get back up there soon.
Don't remember the cave, is it Clutter's Cave as seen on a map? Looks worthy of a visit.

A lovely reminder of home, thanks

I worked down in Worcester on a contract for 6 months and a local took me for a wander in the Malvern Hills, the weather was perfect (much like yours here) and it was a great day, this really brought back the memories. cheers