It's been a while since I have made any posts - primarily as work has kept me busy for the last few months so opportunities for getting out and walking (or doing anything else for that matter) have been pretty non-existent!

The end of the contract presented an opportunity to get away for a holiday and so we booked a family holiday in Los Alcazeres in the Murcia region of Spain. The original plan had been to try and walk something a bit more adventurous than this but the lack of available hire cars and other family holiday demands meant this was all we could get in - but it was worth it!

I would also like to thank fellow WH "posters" for the link to the Spanish equivalent of OS which helped me try and source some routes - albeit I don't have the technological capability to work out how to save the map from this site and post here - so apologies!! That said http//www.ign.es is well worth a look!

The walk is accessed of the main Autovia between Cartegena and La Manga and is signposted off to the Parc Regionale Calblanque. There is a car park immediately as you turn off and they run a shuttle bus here to the beaches on the Med side of the Mar Menor. If like us you arrive early enough and beat the park rangers in you can park at the beach car parks. We wanted to start early-ish and avoid the main heat of the day so we were there at 8.30 on a sunday and not a soul was around! The walk we originally planned to do was the circular waymarked walk of around 15Km. The walk starts from the beach car park and you head along the coast with the sea on your left and Cabezo de la Fuente on your right (No - we didn't have a compass or a map - but given the weather navigation was not likely to be a problem!). We reach a bend and found a map board and were then faced with the decison - do we follow the circular route or do we head to the hills? Given the view - no contest - into the hills we went!! There were a number of paths leading off towards the hill and these head up onto the first "shoulder" and then as you reach the first shoulder you have to more or less pick your own route up towards the summit. We decided to pretty much make a beeline for the base of the clear and visible cliff face of Cabezo and then worry about our route once we got there!! The pathway and route head through what I thought initially was gorse - but as soon as you start walking through it the smell hits you and the hillside is a carpet of rosemary! That said - if you are wearing shorts it does just the same job as gorse in scratching your legs to bits! Pathway through the Rosemary

The climb up is quite steep in places and you have to pretty much make your own way through the rosemary as there is no clear pathway, but it does offer some great views around the coastline and surrounding countryside. Essentially, you can see the goal at the base of the cliff but have to keep climbing and sweating your way towards the top! Making a bit of Height Now 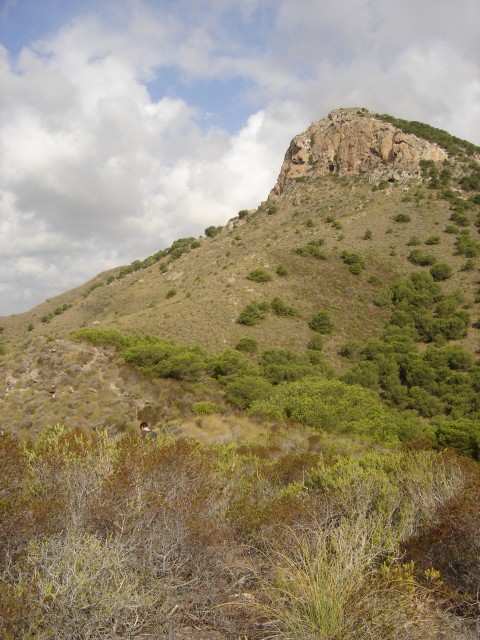 As you get closer to the cliff face the caves become more visible and I recall reading Chris W's reports from Canada and the "Yo Bear" call - so I give it a go much to the amusement of Tom - until I tell him why and that I didn't know whether there might be wild bears in Spain!! I do recall reading one of the brochures about the area and there are supposed to be wildcats in the area (Lynx?) as well as large birds of prey and judging by the number of rabbits we see there should be plenty of food for them as well! Getting Closer Still - Are there bears in the caves?

Once you reach the base of the cliff you are left with a couple of options - either skirting around the base of the cliff to find a more obvious way up - or straight up! As Tom is an accomplished climber - we went stright up with Tom leading! The scramble was actually fine with easy and steady climbing, plenty of handholds and although exposed in places was pretty strightforward (and it was dry!). I did remind Tom to keep an eye on where he was putting his hands just in case of basking reptiles!! It looked like ideal territory of snakes and lizards - but didn't see any! They probably heard us coming! Start of the Scramble

The scamble is about 75 meters and there are a few places where you can safely stop and take in the view around you as you gain height and get a clearer view of the countryside around! View across the Mar Menor

There is then a simple walk onto the summit as you exit the scramble. Me on the Summit Tom on the Summit On the summit we got talking to a Norwegian couple who were no resident locally and they advised on a more obvious route and path up from the La Union side of the park that can be accessed from Fuente Grande. We followed this path back for some of the way as it follows an obvious ridgeline and then we cut down through the valley to make our way back towards the beaches.

There we were rewarded with a nice paddle in the Med - albeit it took us both a few minutes to realise that we were slightly overdressed for this part of the beach! However, as you walk back towards the car park the beachgoers seem to be be wearing a few more beach clothes - i.e.some!

This is a really nice part of Murcia and well worth a visit if in the area as it seems relatively unspoiled and within the park you can get away from people and enjoy the quiet!!

It has at least given me the itch to get out walking again - Dartmoor here I come!

Hi Gary
looked like a great walk, dont know about the scrambling bit though!! willywalker247 wrote:Hi Gary
looked like a great walk, dont know about the scrambling bit though!!

It was a really nice trip for a short one! The scrambling was pretty straight forward and you you don't have the added "interest" that you get in the UK when the rock is wet!!

Thanks Malky, I am surprised you didn't sneak off on one of your little epic trips!! It is a nice area - we have been there before as we have friends who own the place in Los Alcazeres that we stay in but have never got out and about. I had planned to have a go at the Sierra Espuna as I think that Is only about an hour away but time didn't permit.

Great report Gary, that "Yo Bear" is always worth a shout....just for the hell of it sometimes

ChrisW wrote:Great report Gary, that "Yo Bear" is always worth a shout....just for the hell of it sometimes

Thanks Chris and the "Yo Bear" was not quite as effective as " Be careful where you puit your hands just in case there are any snakes"! I assure you the beach find was purely coincidental....although Willywalker has now expressed a keen interest in a camping trip to Murcia!!