A five day trek through the Dolomites Tre Cime (three peaks) national park, culminating in a via ferrata up Mount Paterno (2744m).

We stayed in 'huts' every night, although these were not crumbling shacks with holes in the roof as the name might suggest, but large, modern buildings with comfortable (usually) dormotories and huge quantities of good food in the evening. The price was around 50 euros for bed, breakfast and evening meal. Shower tokens were about 5 euros each - apparently because of the shortage of water. I skimped on the showers.

Breakfast was generally bread, bread, and more bread. The evening meals were all very good, although on one evening I ate something which didn't agree with me and spent a long time in the middle of the night crouched over a drop toilet in the dark with aching thighs, which was probably the low point of my trip. The high point, in both senses, was reaching the top of Mount Paterno using the via ferrata route.

I couldn't help trying to compare treking here with walking in Scotland. It seemed easier to navigate here, mainly because most of the paths and routes were so clearly marked, but also because the visibility was generally better and the landscape had more distinctive features. After a couple of days I had concluded that treking in the Dolomites was just munroing for idiots, but a couple of storms and a big rockfall close to one of our huts one night reminded me not to get cocky about it. Second day, on the way up from the first hut to the Tre Cime, about 900m ascent Most paths and routes were very clearly signposted, with additional markers along the way. I was surprised that times were given instead of distances, as these surely vary depending on the people doing them, but they turned out to be pretty accurate for us. Looking unimpressed with the Tre Cime! One of the huts. We didn't stay in this one but I ate some pasta here and it was amazing. Starting off on the walk around the 'Tre Cime' You are never more than about 2km away from a drink and a hot meal! 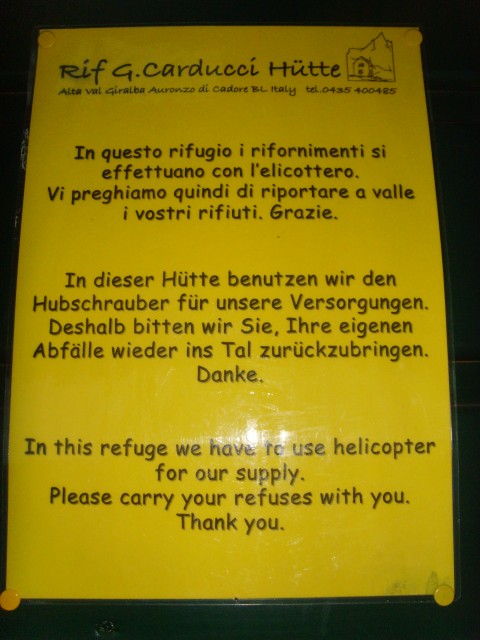 The most remote hut in the national park. Final day. The via ferrata starts in a tunnel Via ferrata is bascially like scrambling but you have a cable running up the rock which you clip into with cords attached to your harness. 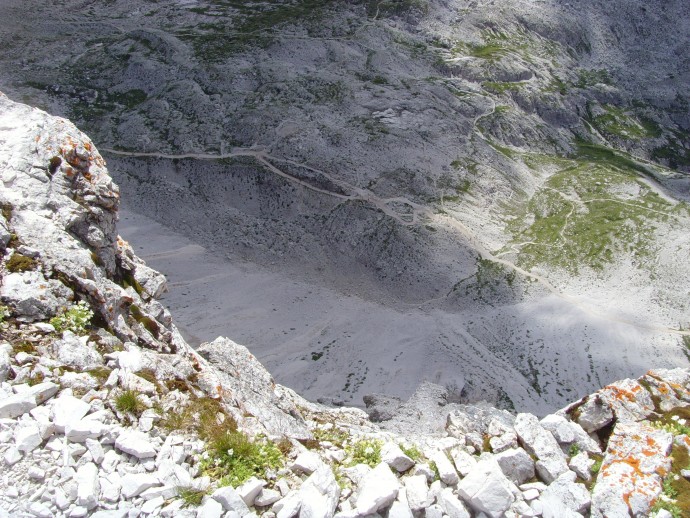 wow - stunning JJ, what a fantastic trip in such incredible surroundings. Beautiful photos throughout, what a wonderful location.

Nice pictures that bring back great memories of a trip through the same area a number of years ago.
Did you find lots of detritus from the first world war on your walks? I found this to be very humbling thinking about the people putting up these routes with very basic equipment and being shot at and shelled.
It is a great area for hiking and climbing.

Great pics of the Dolomites. I too was in this area last year and did the via ferrata ascent of Paternkofel. We took a different route from yourself starting at the pass between Tre Cime and Paterkofel. The views from the summit are fantastic.

Great report and pics. They are a fascinating range.

Cheers for the comments!

Steve - I didn't see any remaining items from the war - I guess they must have all been collected up by now. It is incredible to think that people were in combat in that environment, especially during the winter months (although I'm sure it was equally horrific elsewhere).

Trekker, I think I actually read your report on here before - or just after - I decided to do the trip. Very inspiring! You managed to capture the via ferrata experience with your photos much better than I did with mine. After coming down from the summit, I wanted to follow the via ferrata all the way south to Lavaredo, but I could only find the path that went back towards Tre Cime hut.

I'm really pleased about how this trip turned out. I thought that it might be a bit too 'pro' for someone like me, technically too difficult, or just too terrifying.....but it was just right.

I really recommend this area to anyone into hill walking, scrambling, or climbing.

Very interesting report and wonderful photos, I have friends heading over there soon and realise what I m missing( argh)
Never mind, thank for posting up