Having travelled to New Zealand, partly to celebrate a significant birthday, my wife and I took the opportunity to indulge in one of our favourite pastimes and add a couple of that country’s excellent walks to our schedule.

The first of these was the Abel Tasman Trail. Located on the North coast of the South Island, this must count as one of the best coastal walks ever with the ever repeating format of walking through lush (and thankfully shaded) forest then onto beautiful tropical beaches. The walk usually takes three to five days but as our whole time in New Zealand was limited to four weeks, we opted to have a bash at doing it in three days with two nights camping. 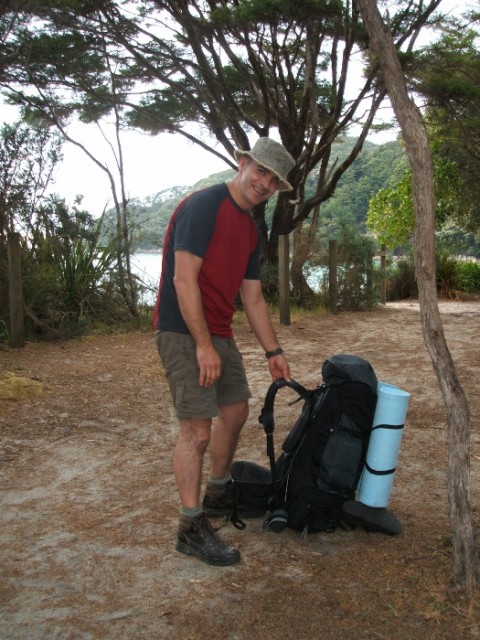 Our visit to New Zealand was planned for late spring in the hope that temperatures would be bearable. However, as fortune would have it, we arrived to find summer had arrived a month early (we learned winter had also done so in the U.K.). We set off from the beautiful Marahau estuary early on our first day across the long boardwalk. Doing the walk involves the need to complete several tidal crossings within a couple of hours either side of low tide and to do the walk over three days also meant a long first day of about 8 hours and 25km carrying full camping tat for two. On the plus side, the opportunity to camp next to the beach on a lovely summer day in December was more than adequate compensation. The walk through the Manuka, Pine, Black Beech and Tree Fern was delightful with the heady smells of these plants never far away. With temperatures in the 25-30’ range throughout, their shade was also much welcomed. 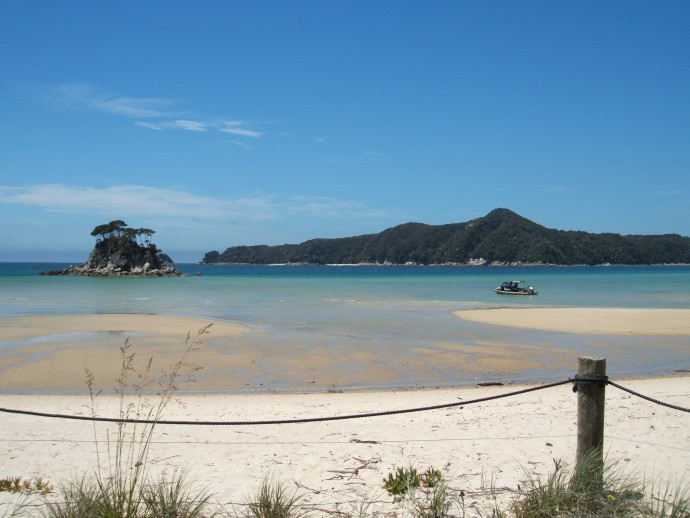 Typical view on day one. The approach to Bark Bay campsite. Each vista seemed to offer the promise of a more exotic and deserted beach and it was a great temptation to take a couple of hours out to enjoy a beach to ourselves. However, Jill and I knew we had to get the first hard day out the way before we could ease up and the critical point here was the Torrent Bay tidal crossing which would allow us to get to our campsite at Bark Bay. Coming from the U.K. in November, we found the heat oppressive but the availability of shade and plenty hydration kept us on the go. Eventually we arrived at Bark Bay at around 3.00pm and after quickly setting up camp, it was time for a brew and a few steps onto the beach to catch what was left of the day’s sun and relax for a bit. An entertaining evening spent with some parents and pupils doing their end of term ‘tramp’ polished off a great first day. 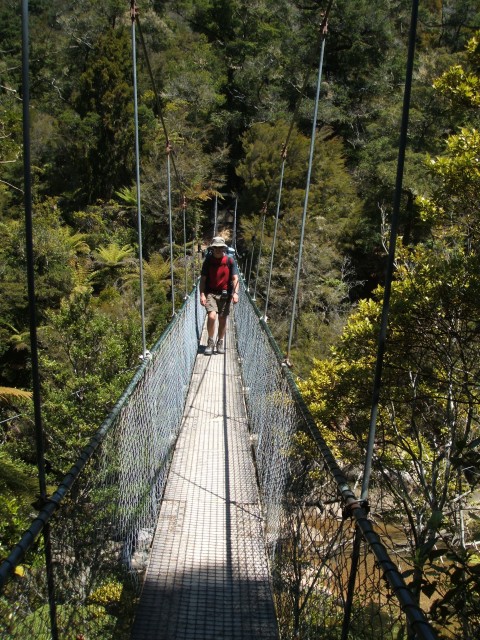 Our second day’s ultimate objective was the campsite at Totaranui, a walk of about 17Km which took about 6 hours with breaks. The walk also marked the start of the beautiful Tonga Island Marine Reserve. The major obstacle on this section of the walk was the impressive Awaroa tidal crossing. Missing the tide here would mean waiting until the following low tide to get across as there is no coastal path to fall back on. The crossing was about 2km wide and very muddy and wet with tiny crabs scuttling about your feet for company. Lunch on the far side in the company of the local birdlife (Tui’s, Fantails and Pukeko mainly) and we were off. The promise of another few hours on the beach at Totaranui and a shower at the campsite was more than enough motivation. The forest and beaches eventually gave way to the relative openness of the immaculate Totaranui campsite and beach. We were advised in high season there can be hundreds of campers here due to its proximity to the road, but as we were there in low season, there were only a few and after a swim, sunbath and shower, we spent our evening meal in the company of a friendly Dutch couple. 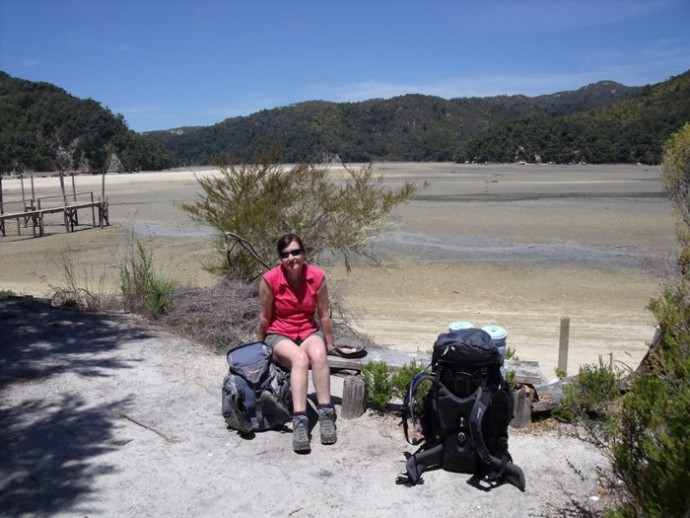 Lunch spot after the Awaroa crossing. 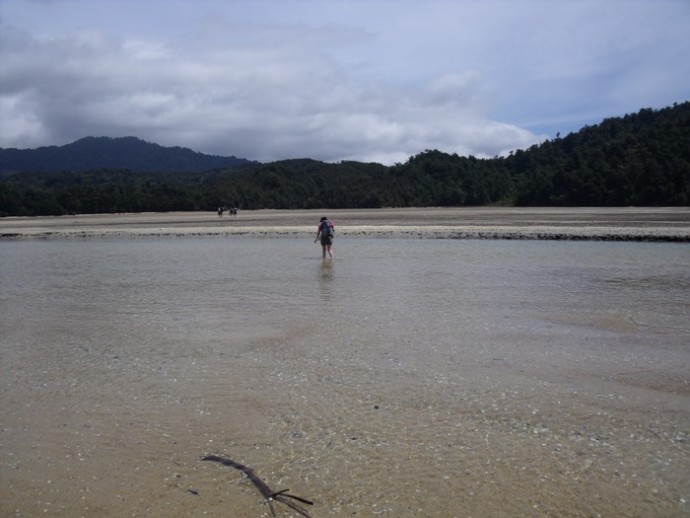 Jill on the Awaroa tidal crossing.

After discovering that the expected bus service at the end of the trail may not materialise, we decided to finish the walk with a trip to see the Fur Seal colony at Separation Point and return to Torantanui then get a water taxi back to Marahau. This proved an excellent alternative as we travelled ‘fast and light’ and saw a great deal including some of the best beaches I’ve ever seen. Wildlife was abundant and sightings of Fur Seal, Dolphin and penguin were among many sightings made on our last day. 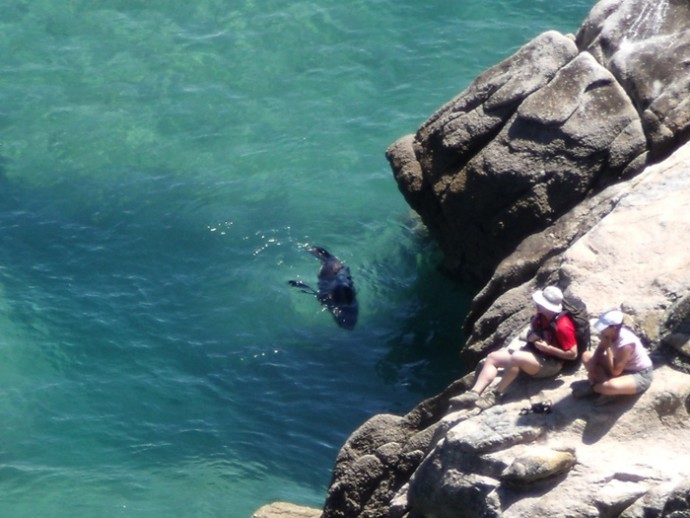 A special mention must go to the New Zealand Department of Conservation. Not only are the paths are beautifully maintained, there are regular toilets as well which came as a pleasant surprise. The D.O.C. Rangers which you will come across were all very friendly and helpful. Anyone considering this walk should visit their website which is also excellent.
Being British, I found this a very different walk to what I’m used to. That said it really was a great walk and one that all my future beach walks will have to be judged against.

What a wonderful walk. I was in NZ in 2010, a stunningly beautiful country. Unfortunately I didn't get any walking done, too busy with other holiday persuits

I so want to go back.

Chrisabelle wrote:What a wonderful walk. I was in NZ in 2010, a stunningly beautiful country. Unfortunately I didn't get any walking done, too busy with other holiday persuits

I so want to go back.

I hope you get there one day Chrisabelle. Unfortunately I could only fit two walks in but both were great in their own day. if you do manage to go back, I would look forward to a a wee report?

Great report AE, stunning scenery and what a wonderful experience to look back on

ChrisW wrote:Great report AE, stunning scenery and what a wonderful experience to look back on

I've had backache for more than 21 years mate! lol

I've had backache for more than 21 years mate!