Today, Rolf and I are on our second hike after that epic 12 hour day yesterday. See Sextener Rotwand, 12 hours of Dolomite Delight.
We are travelling to the Cadini group of mountains situated east of Misurina and its fine lake. Our starting point is just south of Lago d' Antorno. A rather large car park is situated just off the road. Being Sunday, lots of cars were already there along with folk getting ready for their hike.
Off we went on the broad vehicle track. The sun was shining, blue skies all around and we felt great.
Our landlady at Haus Geiger in Sexten gave us a super breakfast as always and being a Sunday there was also a slab of homemade cake. I decided I would save it for the summit.
We overtook quite a few day walkers and some older ladies heading to the Rifuge Fonda-Savio on route 115, no doubt for Sunday lunch in its magnificient surroundings.
After 90 minutes we arrived at the Rifuge. 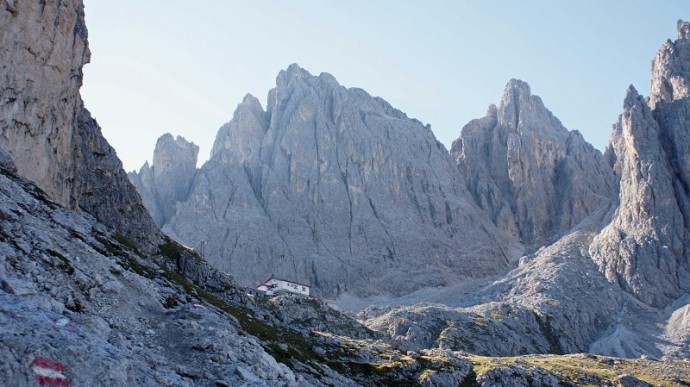 We turned south and headed for the large stone filled basin surrounded by towering cliff faces. 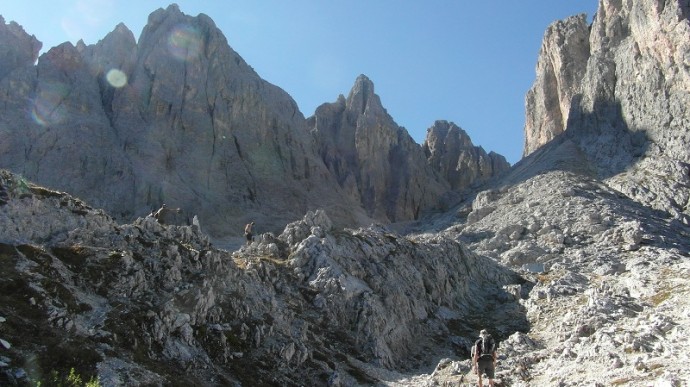 Our target on the left

Here a branch path would take us to the base of the Cima del Cadin de NE where we would tackle the Merlone via ferrata.
Ahead of us was a large group just starting their ascent. At the massive west wall of this mountain the people looked tiny in comparison. I was glad they were well in front as that would give us the climb to ourselves. Start of the ladders 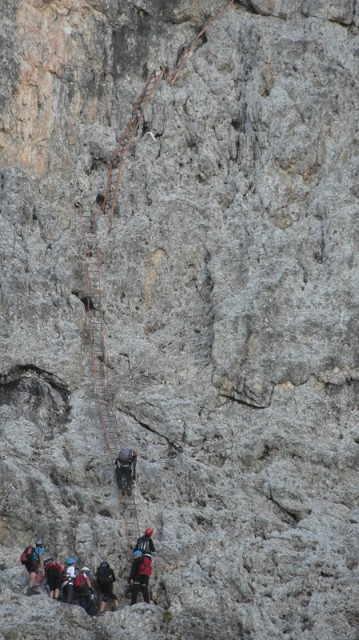 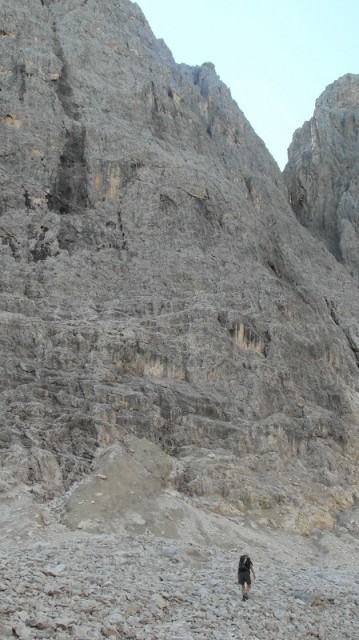 Approaching the mountain base

Time to put on our via ferrata kit. This was going to be different from what I've done before. Here it was all vertical so I just hope I don't get an attack of the heeby jeebees. Well I'm always open to explore new challenges. With Rolf I've got a good teacher, so I always ask beforehand about any difficulties that I may encounter. Once explained I soon commit to the challenge. We set off with some easy scrambling along ledges and then the first wire appears. The terrain seemed OK so I just used it as a handrail . We gained some height and then the bottom of the first ladder appears. This is one bl**dy long ladder that veers to the right further up. And there's a whole lot more to come.
Oh well, lets just get on with it. Onto the ladder now, I clip myself to the rungs for self protection. Going up was easy but the clipping on and off slows one down a bit. Sometimes parts of the ladder was close to the rock face that you couldn't get a proper foothold. Once noticed you are more careful when ascending to the next rung. 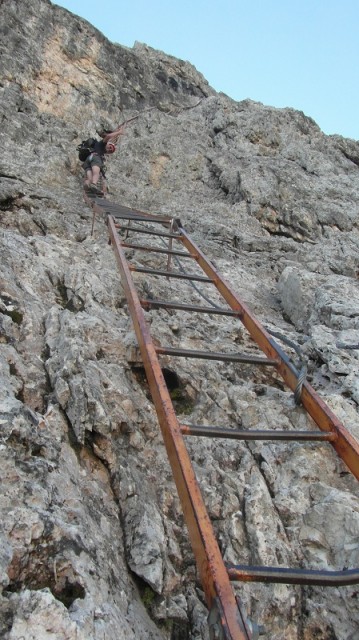 
That ladder eventually came to an end, then it was traversing and climbing with the wire.
So far so good. I tried not to look down much but sometimes when changing ladders and getting yourself protected you'd notice the stony basin a long way down. This is all new to me. There is no get out of jail card here . I kept on recalling Yazz's song from many years ago, "the only way is up" up, up up, up. Luckily I was kind of enjoying it.
That was till I came off a ladder on to a wire traverse. The ledge wasn't big but was OK. As I moved on further a board was in place to make things easier. 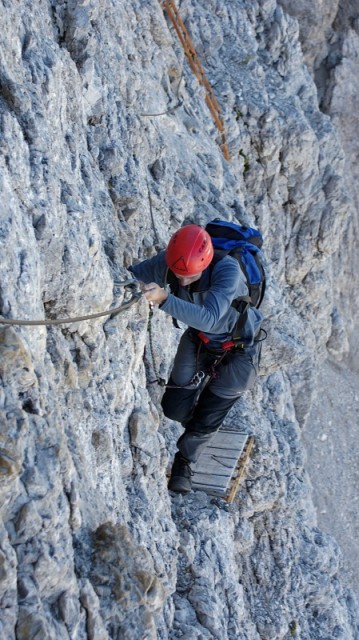 Glad the board was there

Soon after the ledge came to an end and for the first time I couldn't see a safe place for a decent foothold. Rolf having done this before had passed with ease. I had to find a way to make progress. Holding onto the wire tightly with the carabineers attached I jammed my boot into a small notch in the rock. With one movement I quickly got myself into a safer position. There I took a deep breath, relaxed and happy that I can move on again. Now past the difficult section


20 minutes later we were off the wire and now hiking normally across the broken rock. 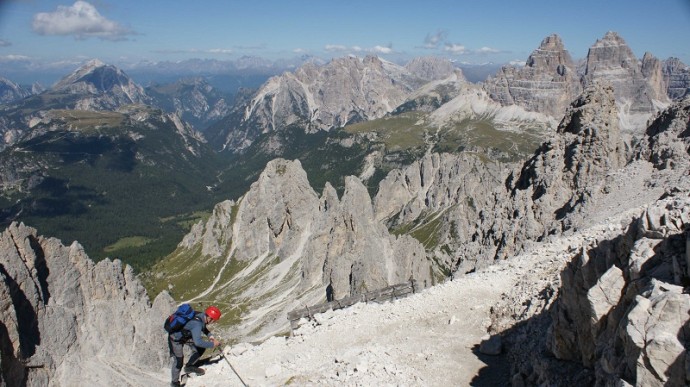 Not far from the summit now

Some minor scrambling ensued with its wire cable and very soon we were nearly at the summit. The large group we saw earlier were now coming down so we gave way to them. Now we could summit and be alone. Minutes later we were there. No summit cross just a stoneman as my friend Rolf calls the stone cairns. 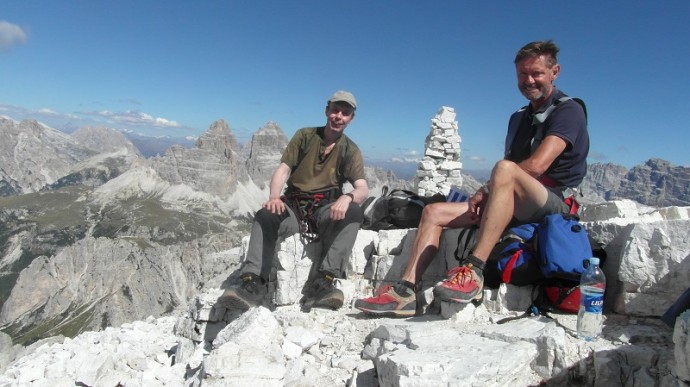 Me, Rolf and the "Stoneman"

The views all around were fantastic. The south faces of the Drei Zinnen rock towers that are a symbal for the Dolomites stood proud and high above its scree bases. 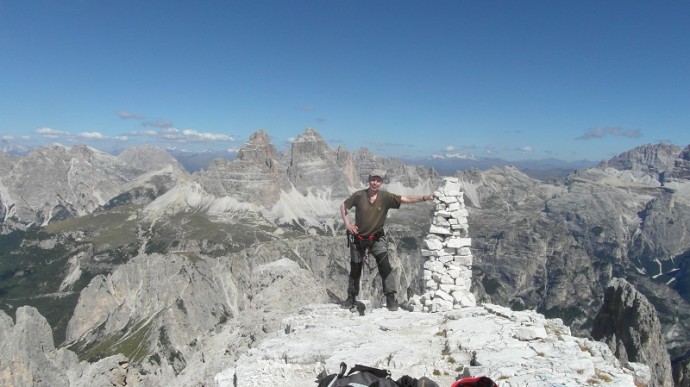 
We stood high over Monte Piana and Monte Piano, 2 neighbouring mountains with flat summits where the Italians were based on one whilst fighting the Austrians on the other. The remains of tunnels, trenches , various crosses and monuments to the fallen can be found. They call this an open air museum. It is well worth a visit which we did a few days later. 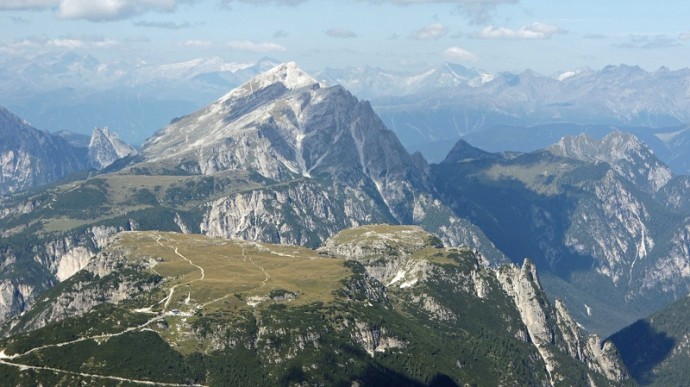 Monte Piana on the left and Monte Piano

Once our photos were taken, time for lunch and that bit of apple cake. It didn't half taste good. In the sunshine at 2788 meters life couldn't be much better. From the car that was 920m ascent including 300m of via ferrata. Not much in terms of Munro bagging but I've yet to see ladders on any Munro. 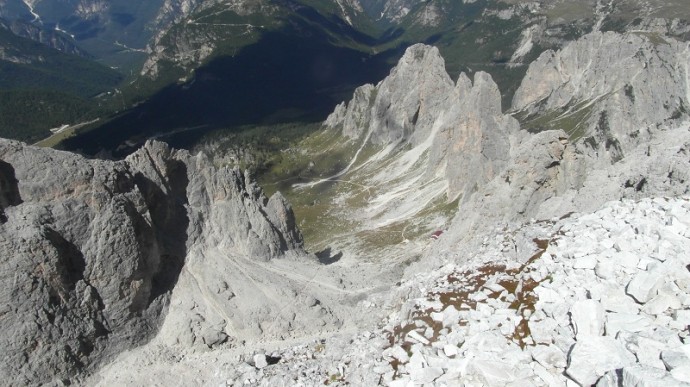 The Rifuge, a long way down.

We could have stayed longer but the hike down was calling. The descent is by the same route as ascent. 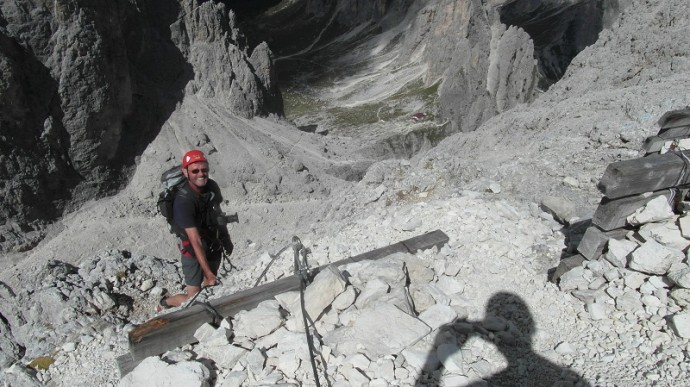 Start of the via ferrata going down

Going down was quicker than I thought. Gravity does help a lot. At that tricky spot from earlier Rolf was in place to direct my foot down to another small ledge and from there I got across to more comfortable rock. Speaking to Rolf and then some others at a later date the secret is to hang out from the wire with your feet flat up against the vertical rock face and move across. Me being new to all this just wants to be close up to the rock face. Maybe in time I'll be more confidant. Still its good to be wary and cautious. This is not the place for accidents. 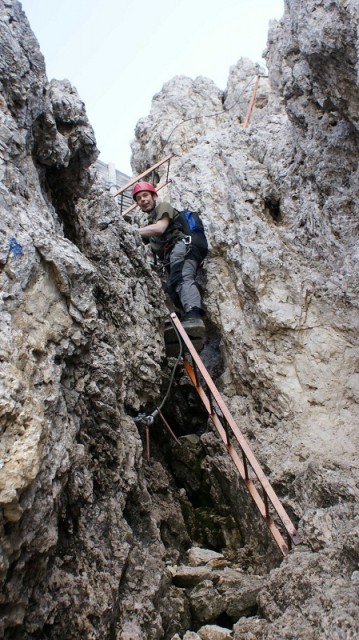 
As we descended we met 2 separate couples making their ascent. When on the wires you must get yourself in a good safe position to let others pass. The second couple we met was English so we chatted for a while. It was good to hear English again because usually all I hear is German. 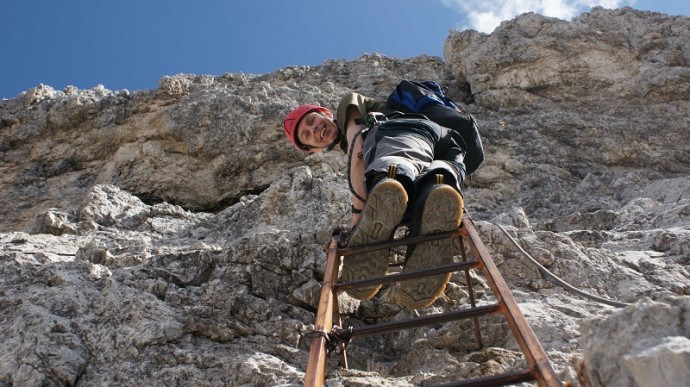 At the base of the mountain we took off our kit and enjoyed an easy hike to the Rifuge. 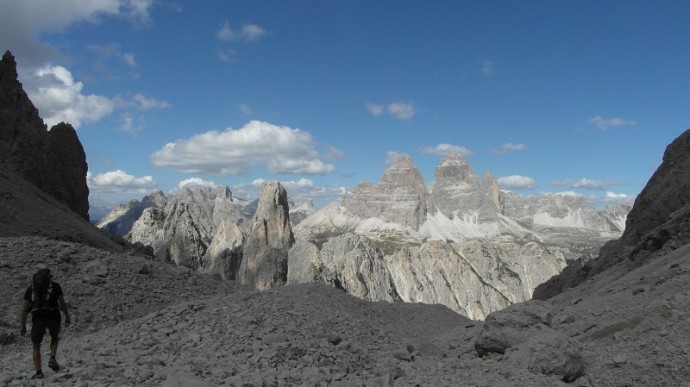 Back to normal hiking.

Rolf was looking forward to a cappuccino but unfortunatedly the place was very busy this mid afternoon so we decided to continue our descent. 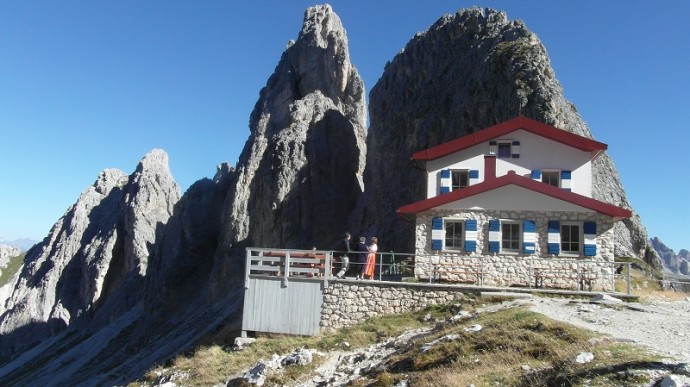 We headed on down the good path and an hour later was back at the car.
Rolf drove a few hundred meters to a roadside restaurant where he had his cappuccino and apple strudel. We could see the Rifuge from our table and the great Cadini mountains that surround it. Only a short time ago we were up there. How pleasing.

Another absolute stunner T53. What a glorious hike, some tricky spots to overcome too so good work there mate

clearly it was worth the effort, the views are spectacular all around. I love hiking the alpine areas and rock hopping to and fro as I go.....I would have been in heaven here (as you were) Great hike, and fantastic report, thanks for sharing mate

A great effort to get up

but then you have to come down the same way

Nah, if I'd have made it up (of which there would be no chance looking at thos ladders

Great pictures, no need to be scared of heights here. The Munros look easy to conquer compaired to this . Well done.

Thanks Chris W for your comments. Like your Canada there's lots of interesting trails here to keep you busy for a lifetime.
PeteR said

Maybe I should have taken an American Express card with me or better feigned an injury. Seriously it wasn't bad coming down but you do need that head for heights.
munrobagger46 said

The Munros look easy to conquer compaired to this

Aye, you don't get any ladders to assist well not the ones I've done.

Amazing - this looks absolutely mental. Must do it next year!

looks brilliant! would definitely be keen on giving that a shot one day!
great photos

Dan,
You wouldn't regret going to the Dolomites. Such a fantastic place with hikes for all abilities.
Hope you get there one day.